It’s that time of year again. The leaves are turning orange, coffee mugs are filling up with pumpkin-spiced lattes, and enormous LEGO spaceships are cropping up all over the internet. That’s right, it’s SHIPtember! Scott Wilhelm‘s entry has us gobsmacked. It’s christened the Ockham’s Razor, which in itself is a wicked name. But this 140-stud wide behemoth looks truly alien. There aren’t any obvious signs of scale, so this could be an extraterrestrial hoverboard, but one gets the impression it’s a sprawling mega fortress shooting across the stars. 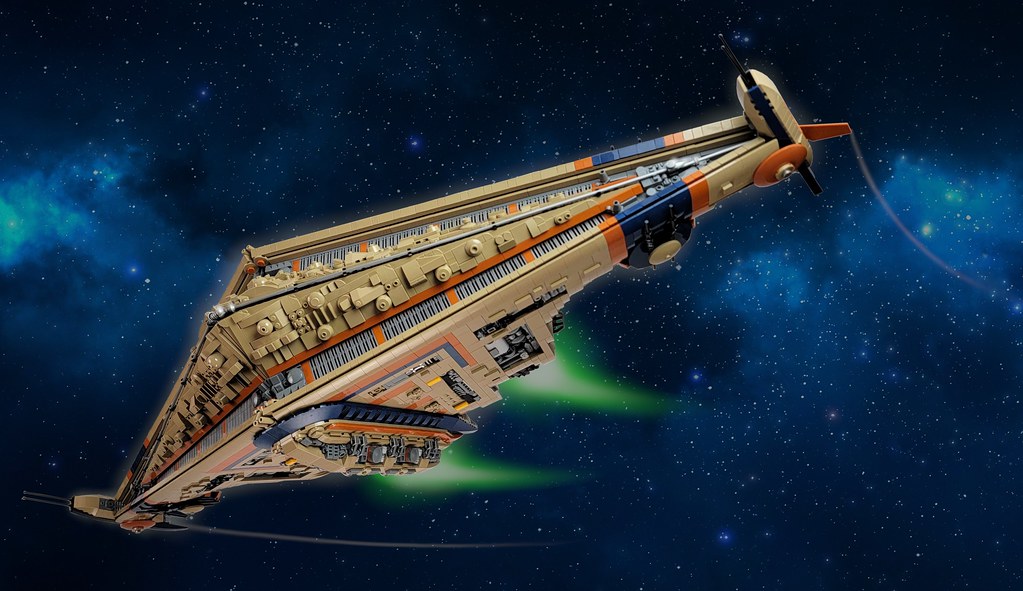 To get a perspective on its real-life scale, just look at this shot of the rear. Two halves of a Star Wars planet are used for detailing, and these are not small parts – but they look tiny here! The greebling work combined with the geometrical shapes and the colour scheme all combine to make a seriously impressive spaceship. 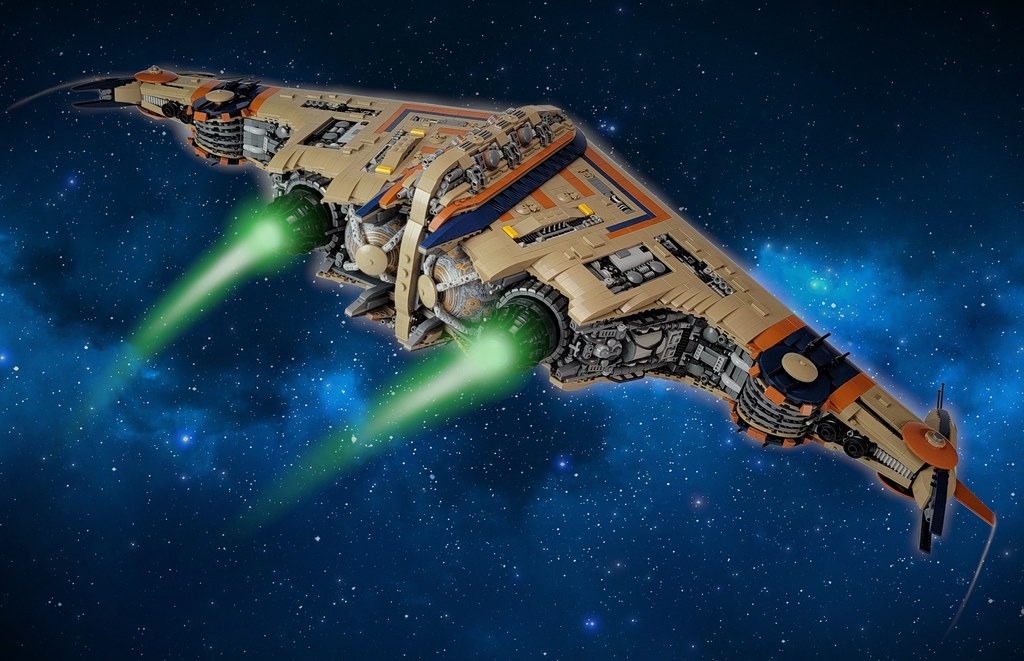 While the Empire tends to shun non-human species, the Jedi embrace all beings with a connection to the Force. Although taking children from their families at a young age and indoctrinating them sounds like something the First Order would do. At any rate, this female dragon Jedi by B&W Bricks is a fantastic LEGO model, with dynamic limbs and a graceful pose, this warrior looks like she could give a Trandoshan slaver a sound beat-down. 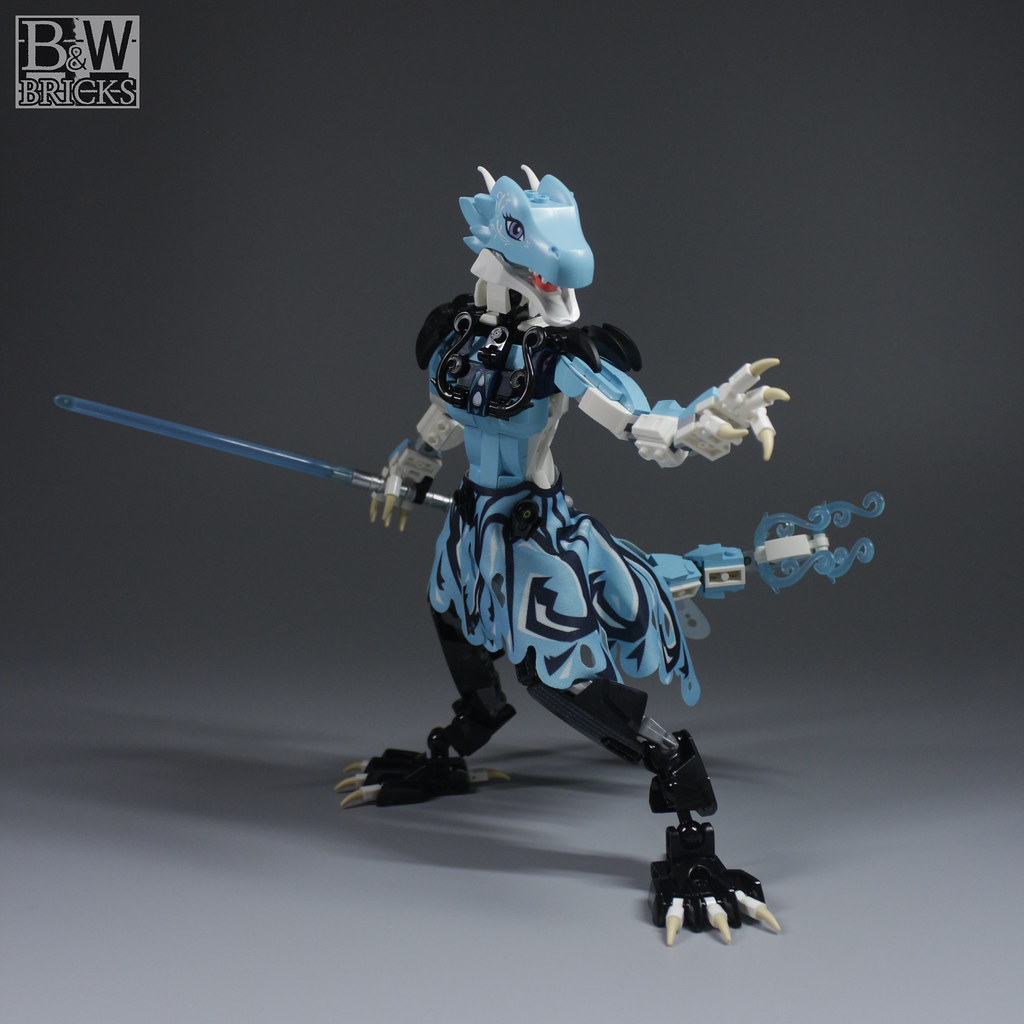 A cruise ship passes by a quaint hillside town in this LEGO microscale creation by Minifignick. This build makes adorable use of several new parts from the Series 23 Collectible Minifigure line. The houses and the ship itself are obvious, but we even spot some reindeer antlers getting put to creative use. 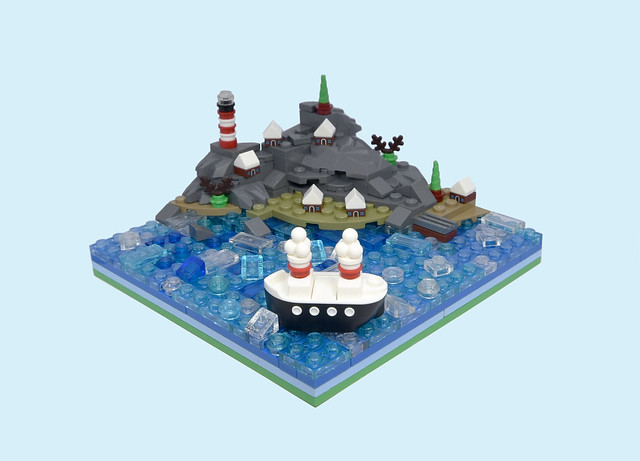 I cannot get enough of the beautiful LEGO stonework on this Black Falcon castle by Michał Kozłowski. The long, slender slopes reaching up from its walls and forming the battlements atop them add such height to this construction. Those expertly textured and colored walls reach up to two dark, sleek roofs capping a duo of spires. It almost completely distracts from the enemy horde trudging through the vegetation on the ground below. Festooned with birch trees, this plot is where our invaders have set up a ladder to breach the walls. 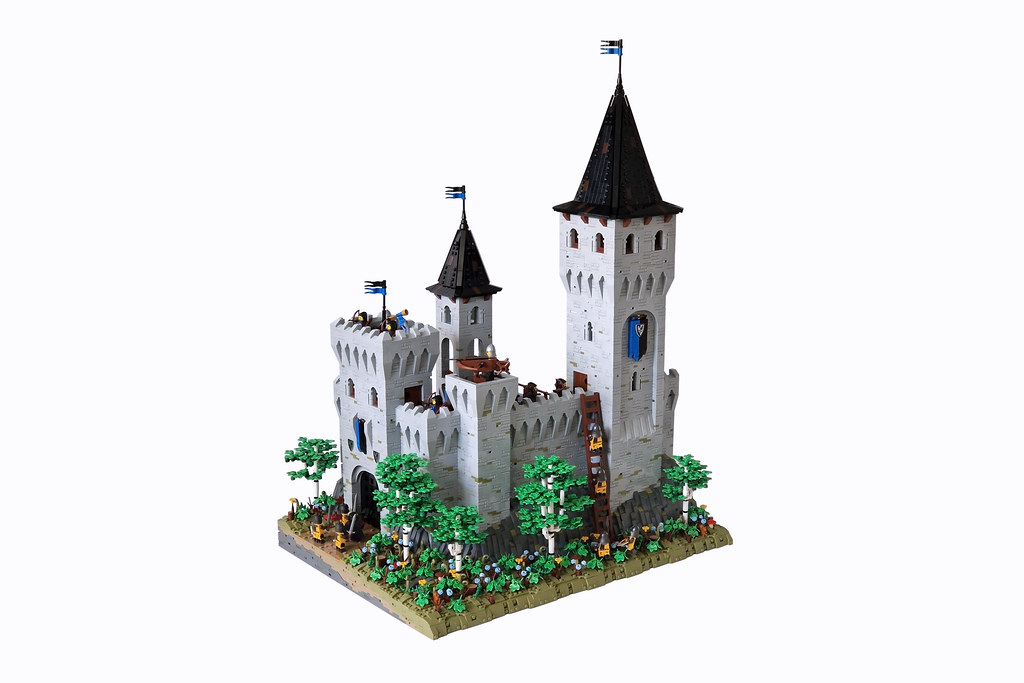 Thankfully, this fortress is armed with a heavy duty ballista to take out any enemies that make it over the bulwark. I think this design is top notch, and definitely my favorite part of the build. 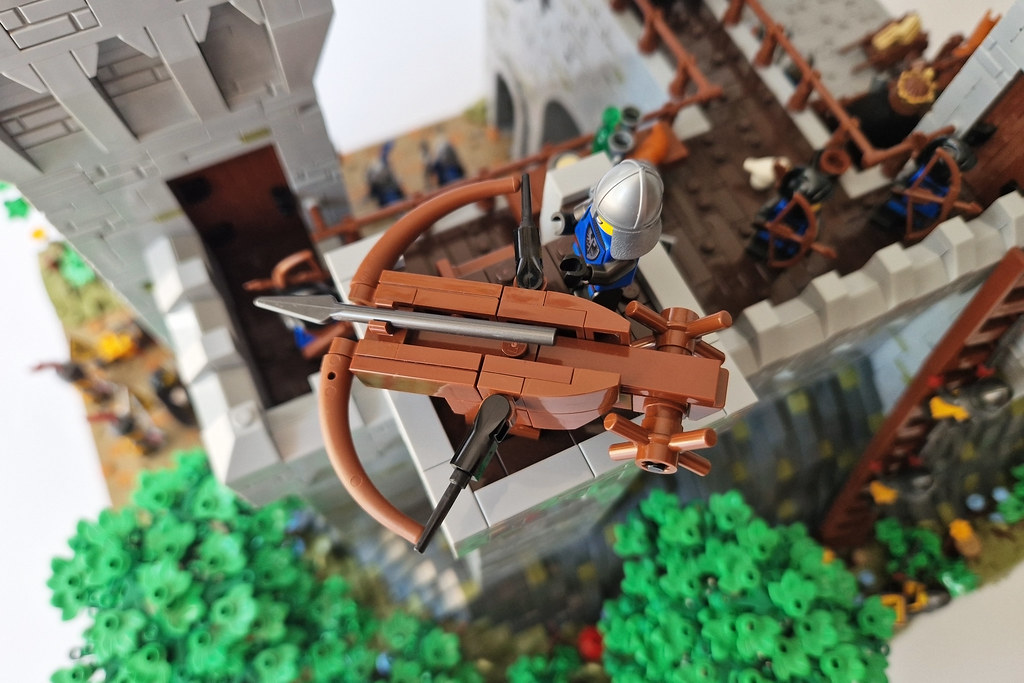 LEGO has released a lot of 1:1 real-world items lately, and if you’re willing to collect them all, you’re well on your way back to a vintage workspace. You’ve got a typewriter and a globe, and even a lunchbox if you’re so inclined. But you’re still on your own if you want to keep working after dark. Builder Castor Troy, in collaboration with builder Max Brich, have found a solution, though. This art-deco inspired lamp is wired with LED lights to shine through that Tiffany-style lampshade. The solid base has just enough detailing to suggest metalwork, which carries up nicely into the delicate curves formed from LEGO plant elements and tubing in the lamp stand proper. It certainly fooled me into thinking this was an antique at first glance, anyway. 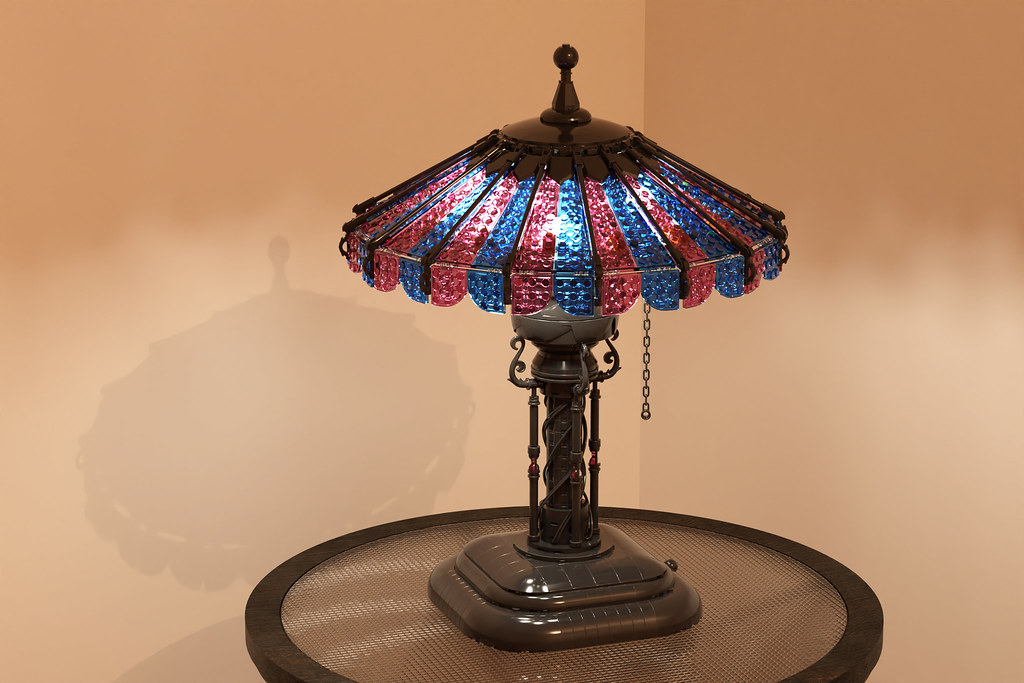 Sadly, this is only an idea at present, as those stained glass bits consist of parts LEGO hasn’t released in transparent colors. But, in the meantime, we can take our inspiration and make our own forays into custom building. In fact, we’ve got a lot to offer in our archives if Art Deco is your thing.

For centuries, scientists have labored in vain trying to turn lead into gold. Builder martin.with.bricks remembers the next best thing – Just turn gold into cottage cheese instead! And thanks to Dr. Bunsen Honeydew and his lab assistant Beaker, today we can do just that. In this lovely tribute, Martin has recreated the classic Muppet Labs, complete with a variety of equipment, technical readouts, and a big set of windows to open in case of fire. (Like that ever happens in Muppet Labs…) I like how just the shape of some of the LEGO elements is enough to transform them into science-ready glassware. Those “minifigure action pose” 1×1 modified plates in the foreground feel right at home, as does that 1×1 with center bar in the background. It’s a set up for comedy cottage cheese all right. 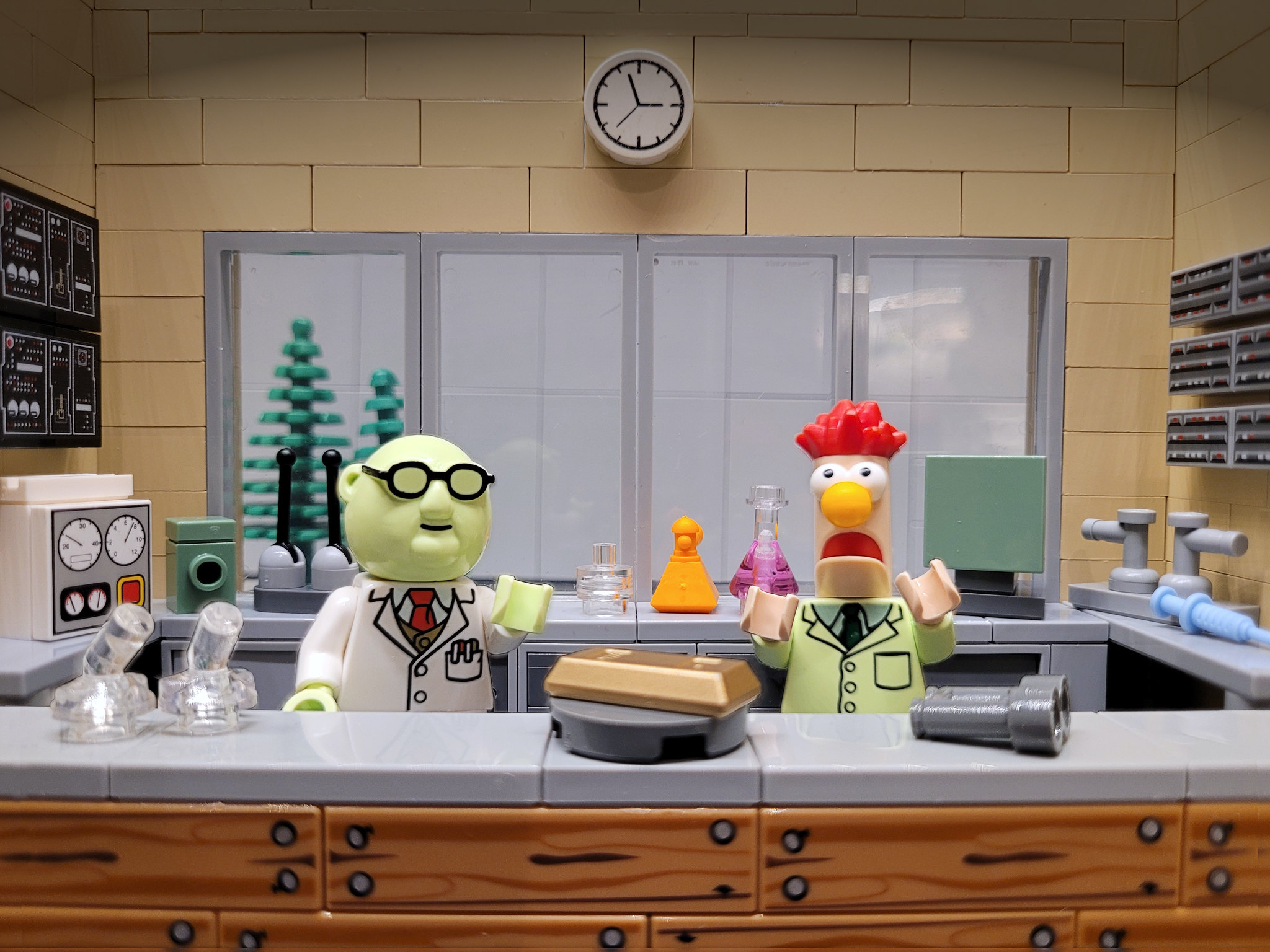 If you don’t remember this particular experiment, we have you covered thanks to a handy YouTube link. It’s also worth a look!

Check out this great entry from our archives if you prefer your Muppet scientists brick-built!

There is a lot going on in this super-sized GNK droid build by B&W Bricks. Clearly fed up of being the butt of jokes in the Star Wars universe, this unloved droid has decided to take matters into its own hands, by giving itself some. As well as this upgrade, it seems to have taken to organised crime. In this maniacal pose it actually reminds me of the grumpy robot in Wallace & Gromit’s Grand Day Out. The eagle-eyed among you will notice that the GNK is an upscaled imitation of the minifigure-scale one that comes in LEGO sets, matched by an upscaled blaster and letter tile. There’s also a stormtrooper alarm clock, some deck chairs, a case of money, and… A stormtrooper wielding Minecraft weapons? I suppose it’s one of the droid’s minions. Either way, they seem to be terrorising poor Jedi Bob. To be fair if I was pursued by a vengeful walking battery and a stormtrooper with a diamond sword, I’d be terrified as well. 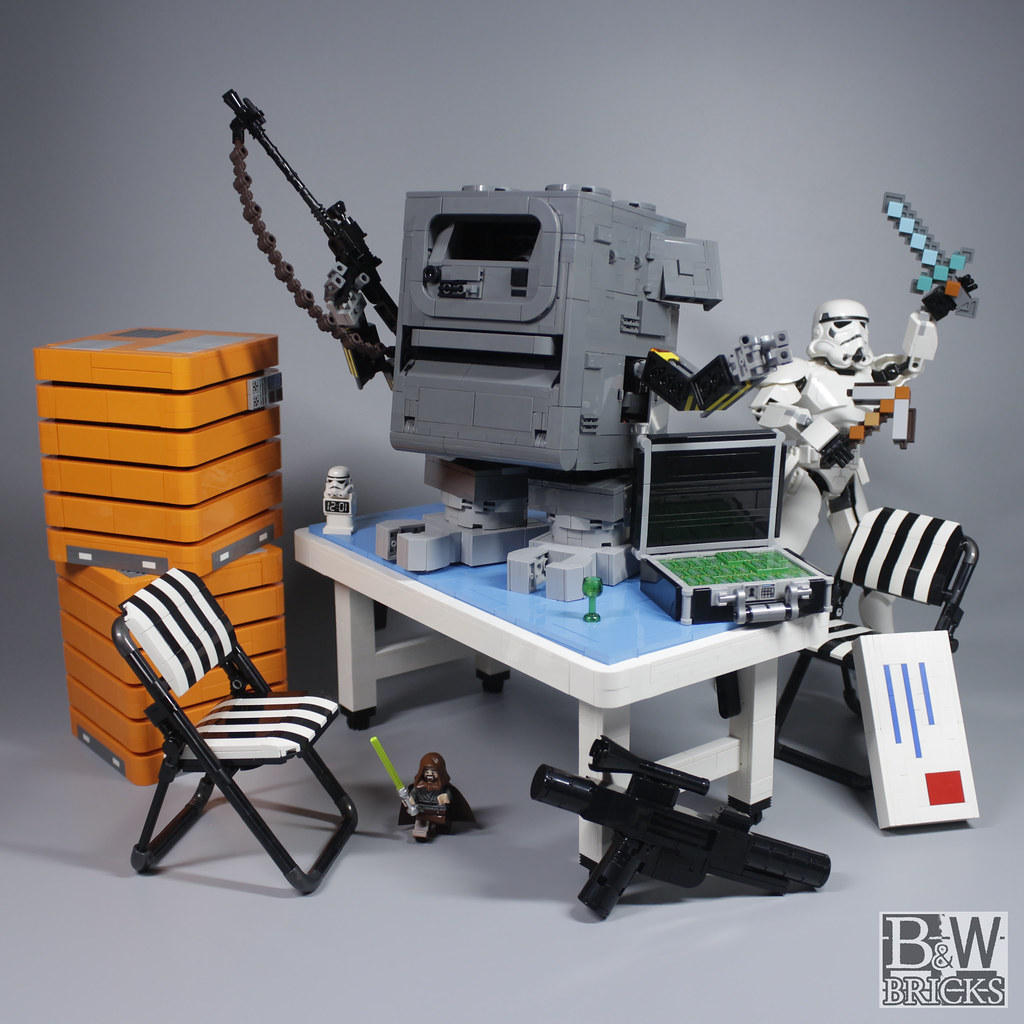 Today LEGO has revealed 75331 The Razor Crest as the next Ultimately Collector Series (UCS) set in the Star Wars lineup. The infamous bounty hunter’s ship from The Mandalorian marks the first vehicle from one of Disney’s Star Wars TV series to get the UCS treatment. With 6,187 pieces and 28 inches (72 cm) in length, the new ship is in minifigure scale, dwarfing the previous 75292 Razor Crest set from 2020. The set will include Din Djarin, Grogu, Kuiil on a brick-built blurrg, and a Mythrol prisoner. It also features a full interior with multiple removable hull sections for access. It will retail for US $599.99 | CAN $759.99 | UK £519.99 and will be available for LEGO VIP members starting Oct. 3, with general availability following Oct. 7. 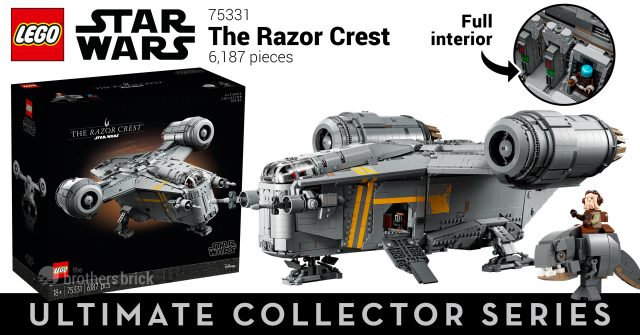 END_OF_DOCUMENT_TOKEN_TO_BE_REPLACED

It’s been over a year since the official LEGO Ideas vote revealed that Ray the Castaway by Daditwins would be a future gift with purchase. And now, at long last, we can get our hands on the final set (LEGO Ideas 40566: Ray the Castaway) from October 1st – 13th with qualifying purchases of US $120 | CAN TBD | UK £120 from LEGO stores or LEGO Shop Online. Clocking in at 239 pieces, is this GWP something everyone will need to pick up, or will it be “cast away” as inferior? Read on for my full review to find out. 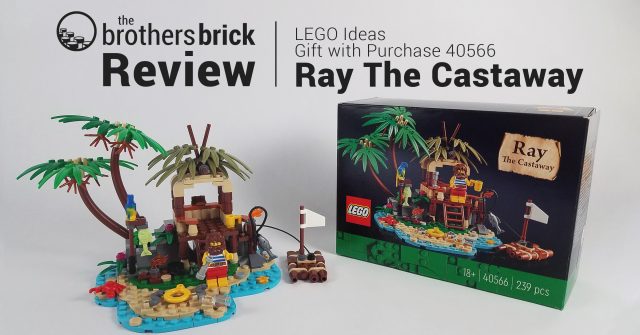 END_OF_DOCUMENT_TOKEN_TO_BE_REPLACED

Maximillian Bricks has triggered my nostalgia in a big way with these recreations of the Kenner Star Wars Mini-rigs. A little backstory, for those of you unfamiliar with the Mini-rigs: Star Wars was famously a merchandising juggernaut from the very beginning. But, once upon a time, before the internet and on-demand movies – heck, even before wide-spread physical media for your home – people buying up Star Wars merchandise weren’t obsessed with screen accuracy. It was enough that the toys just looked vaguely like something that might have been on screen. The toy company Kenner needed to fill the shelves with certain price points, and so they developed a line of smaller vehicles that never appeared in the movies. 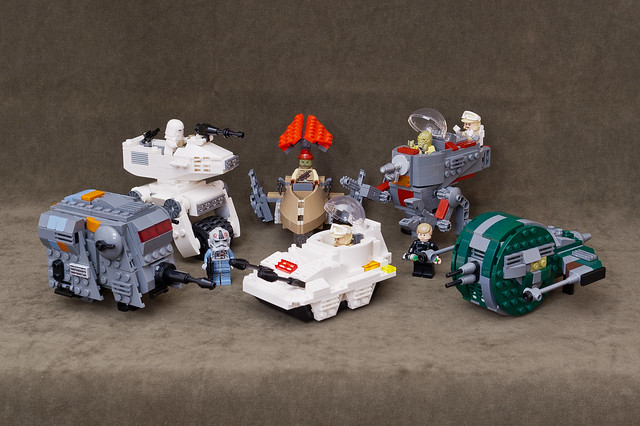 These vehicles, being smaller and more affordable, filled toy boxes nationwide. And, for some of us, they’re key to our nostalgia of playing Star Wars at the time, even though they never appeared in the media. Maximillian’s brilliant recreations take me back to the days of burying Luke Skywalker in my sandbox, back when I didn’t worry about the fact that his lightsaber accessory was yellow and when WalrusMan was the most dangerous villain in the galaxy (because I didn’t have a Darth Vader figure).

Classic Space has had a well-established revival among AFOLs in the form of Neo-Classic Space. Recently though, another vintage LEGO space theme has been having its own revival – Ice Planet 2002. Dale Harris has come up with an excellent idea for the story behind this resurrection! Rather than referring to it as Ice Planet 2022 (too obvious), he has coined the term Ice Planet Badlands. It’s described as a ‘post-apocalyptic Ice Planet’, which sounds frankly awesome. This Surefoot TR3 rover is part of this proposed future, with the classic blue, white and neon orange colours paired with some more utilitarian rusty metal. Perhaps the intrepid minifigure explorers got stranded on the Ice Planet, and have had to use their increasingly out-dated vehicles to try and find a way home. I cannot wait to see more! 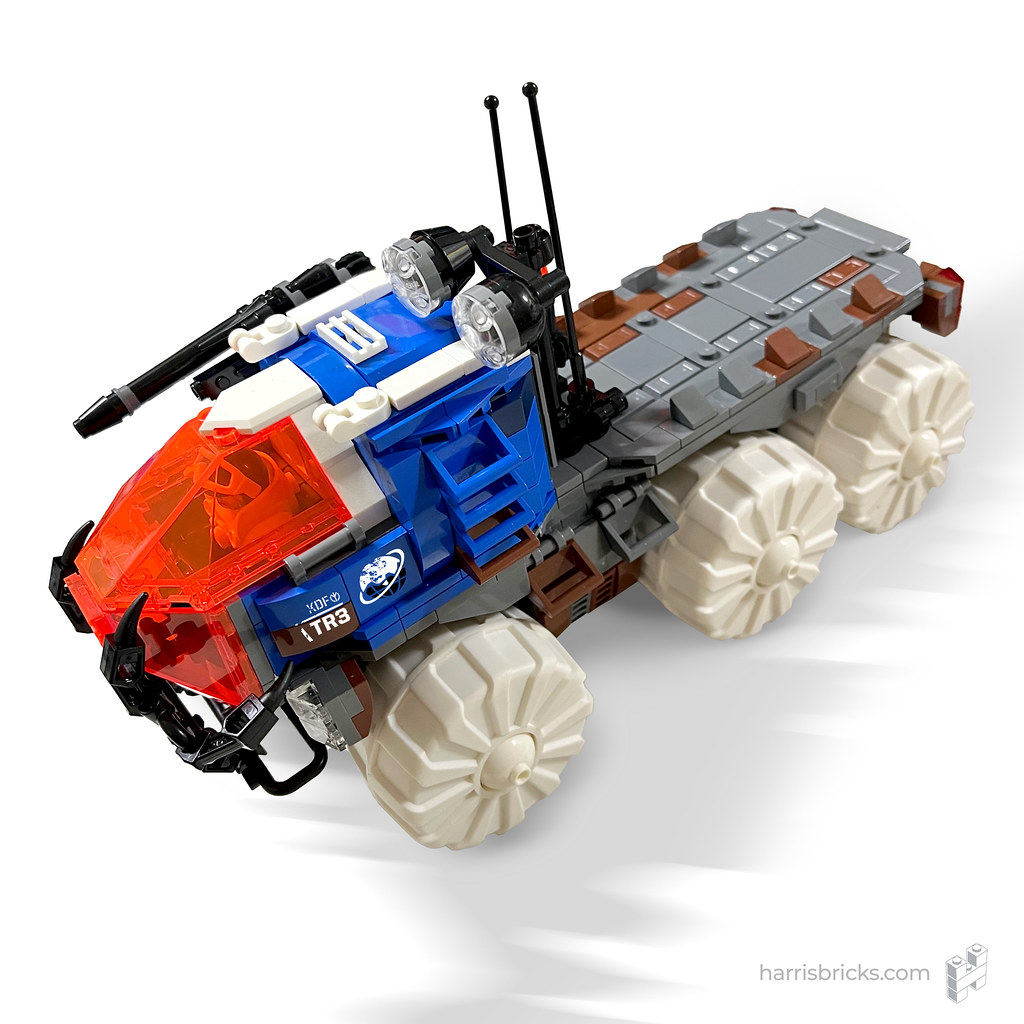 Ralf Langer is a master when it comes to making bulky LEGO creations. He also is very capable of making builds look very delicate and fragile. In this creation it is almost baffling to me that he manages to make this massive tower look light and airy. The hexagon shaped towers are created by sticking hot dogs into 1×1 round plates with holes. Ralf’s builds always look quite part intensive so my guess is that these two towers actually weigh quite a lot. Yet he still managed to make it look like they are just floating in mid air. The window in the middle part of the build looks quite interesting and Ralf himself is quite fond of it, so I hope he ventures further into that style of architecture because I am most curious what he’ll come up with.