Although we usually try to keep our writing on The Brothers Brick accessible to everyone, LEGO jargon inevitably sneaks in. This page works like a dictionary and lists the LEGO terms you’re most likely to encounter here on The Brothers Brick, and is not intended to be exhaustive.

Want to find a LUG near you? Use LEGO’s official community locator tool.

LUGBULK
A LEGO program available to RLUGs and RLFM through which bulk quantities of elements may be purchased at discounted prices. See also: LAN
LURP
Little Ugly Rock Piece. The smaller of two classic pre-fabricated LEGO elements traditionally available in gray and frequently included in LEGO castle sets. Part number 6083. More experienced LEGO fans often encourage other builders to use brick-built landscaping rather than LURPs. See also: BURP
Microscale
A scale for building models in which a minifig would be too large to represent a person. Varies between anything smaller than minifig scale to a scale where a figure would not be visible to the naked eye.
Minifig
Short for Minifigure. The blocky miniature figures featured in most LEGO sets. First introduced in 1978, the design is a trademark of The LEGO Company. See also: Minidoll
Minidoll
The thin, curved figures featured in LEGO Disney Princess, Elves, and Friends themes. First introduced in 2012, the design is a trademark of The LEGO Company. See also: Minifig
Miniland
A style and scale of building in which figures are approximately 10 bricks tall and most studs are left exposed. The name derives from the popular “Miniland” attractions at LEGOLAND theme parks which employ this style.
MOC
My Own Creation. Any LEGO creation designed and built by a LEGO fan without instructions. Generally pronounced “mock” (not “Em-Oh-Cee”)
MOCFodder
A set that you buy strictly for the pieces, rather than because of the set design. The pieces are meant to feed your MOC building, hence the name “MOCFodder”. See also: Parts Pack
MOCpages
A LEGO-specific photo hosting website used by LEGO builders to share creations. At times unreliable and slow. See also: Flickr
Modulex
A system of construction elements created by LEGO in 1963 and marketed to architects as a professional tool. Modulex elements are smaller than traditional LEGO System elements, and are generally non-compatible. Eventually, LEGO spun Modulex off as its own business, and today Modulex is one of the largest signage manufacturers in the world, though it no longer produces the Modulex system of brick elements.
MSRP
Manufacturer’s Suggested Retail Price. The official price for a LEGO set as established by the LEGO Group for a particular market. Individual retailers may set their own prices higher or lower than MSRP, and MSRP may vary from country to country. See also TRU and S@H
NPU
Nice Part Use. An unexpected way to use a LEGO element in a model. Often overused in praising a LEGO creation.
Parts Monkey
A builder who takes a special interest in individual LEGO elements. A parts monkey views most sets as parts packs.
Parts Pack
An official LEGO set that has many desirable LEGO elements but which may not have an overall design that appeals to adult LEGO fans. See also: MOCFodder
Plate
Any LEGO piece which is 1/3 the height of a Brick.
Purist
A LEGO creation that does not include any customizations, such as decals, modified parts, or custom accessories from third-party vendors like BrickArms, BrickForge, and Big Ben Bricks. A form of religious fundamentalism. Contrast with Custom.
Rainbow Warrior
The type of multi-colored LEGO creations that we all built when we were eight years old.
Render
A computer-generated image of a MOC designed using a digital building program, such as LDD or LDraw. Considered by some fans to be inferior to physical creations since the builder is not limited by physics, collection size, or using only pieces which actually exist. This method nonetheless takes much the same skill and familiarity with bricks as traditional building.
RLUG
Registered LEGO Users Group; a term used by The LEGO Company to denote a local, geographically oriented LUG that is officially recognized by LEGO via the LAN. See also: Ambassador
RLFM
Registered LUG Fan Media; a term used by The LEGO Company to denote an officially recognized online LUG, news site, forum, magazine, or other fan organization that is not an RLUG. See also: Ambassador
S@H
LEGO Shop at Home. The old name for The LEGO Group’s direct-to-consumer sales channel, particularly the printed catalog and telephone service. Now also used by long-time fans to refer to the LEGO Shop online. These direct channels are often the only place to ensure that you pay MSRP.
SHIP
Seriously Huge Investment in Parts. Sometimes Super or Significantly Huge Investment in Parts. A very large LEGO creation — particularly a LEGO space creation. As used in the LEGO space fan community, a SHIP is generally at least 100 studs long. 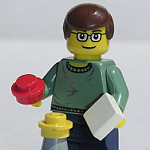 Sigfig
Short for Signature Minifig. The minifigure version of a LEGO fan that he or she uses in online communities as an avatar. Sigfigs may or may not resemble the person physically, as LEGO fans used to interacting with each other online often discover at LEGO conventions.
SNOT
Studs Not On Top. A building technique that places LEGO elements on their sides or even upside down to achieve the shape or structure the builder wants in their creation.
STAMP
Sticker Across Multiple Pieces. A dreaded situation where a set’s instructions require a sticker to be placed across several pieces, ensuring the pieces can never be separated without ruining the sticker.
Stud
The distinct cylindrical bump or knob on the surface of LEGO bricks which fits inside an anti-stud and serves as one half of the mechanism by which pieces interlock. Studs are frequently used as a unit of measurement: e.g. a model is 40 studs long. See also: Anti-stud
Studless
A building style in which visible studs are minimized or, ideally, eliminated. Usually accomplished by a combination of tiles and SNOT techniques.
Swooshable
A quality that allows a LEGO creation to be picked up and flown around a room as the builder makes flying and/or shooting noises.
Tablescrap
A small, clever build that doesn’t stand alone as a completed creation. From “table scraps,” i.e. leftovers. A tablescrap may be a simple exploration of a technique (such as an interesting way to combine several elements to make an odd shape), or may be a recognizable item that’s just too small to merit presentation on its own (such as a minifigure chair). Many builders set aside their tablescraps and save them for use in future creations.
TBB
The Brothers Brick. You are here.
TFOL
Teen Fan of LEGO. LEGO fans who may be past the primary target demographic for LEGO sets, and who are likely avoiding their Dark Ages
Tile
Any LEGO plate which is devoid of all or most studs, giving it a smooth upper surface.
TLC
The LEGO Company. See TLG.
TLG
The LEGO Group. The family-owned parent company for all LEGO-related brands and companies worldwide.
Travis Brick
A modified 1×1 brick with studs on 4 sides. Named for Travis Kunce, a deceased fan who was known for his enthusiasm for the piece. Part number 4733. A common piece used in SNOT building.
TRU
Toys ‘R’ Us, a now-defunct brick-and-mortar toy retailer. Though roundly criticized by LEGO fans for inflated prices, Toys ‘R’ Us frequently had LEGO sets earlier than any other retailer (including LEGO) as well as a broader selection than most. See also: MSRP
UCS
Ultimate Collector Series. An irregular series of large LEGO Star Wars sets designed for older builders, often in large scale. Frequently used as a scale reference for LEGO fan creations that are larger than minifig scale, though some sets bearing the UCS moniker are minifig scale.
Vignette or Vig
A small LEGO scene, traditionally built on a base 8 studs long by 8 studs wide. Usually depicts a single, frozen moment in time with a narrow focus. Contrast with Bignette and Diorama.