Chris Deck is a man after my own heart. Here’s a quote from his FBTB Forums post:

Same rules apply for him as for all my other minifigs, too: No saw, glue or paint.

I would not have thought to use binoculars on his face. Nice job, Chris!

I recently blogged about Brickshelf user comic’s creations based on Hayao Miyazaki films, promising to highlight his blog here on Pan-Pacific Bricks.

Ichigou and Nigou regularly (sometimes daily) post new stop-motion LEGO Star Wars movies. You have to see them to believe them, so head on over to LEGO INC and check them out for yourself!

The movies are in Windows Media (WMV) format, so you’ll need Windows Media Player, available for free from Microsoft. The movies themselves are in English, with Japanese subtitles. They also maintain a master list of all the movies they’ve posted, broken out by episode. Pretty darn cool!

I highlighted Brickshelf user comic’s Robonoid MOC a couple weeks ago, promising to post (must…resist…cross-linking!) about his Star Wars stop-motion movies. Before I had a chance to do so, he posted some really cool creations based on my favorite Hayao Miyazaki movie (and lengthy comic book saga), Nausicaa of the Valley of Wind. 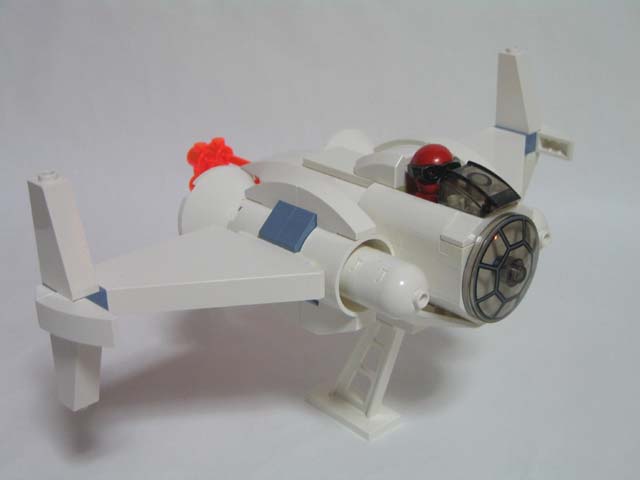 Admittedly, the gunship is dark red in the movie, but the shape is great! Nice use of the canopy from Anakin’s Jedi Starfighter.

Second, the powered glider Mehve that Nausicaa herself flies: 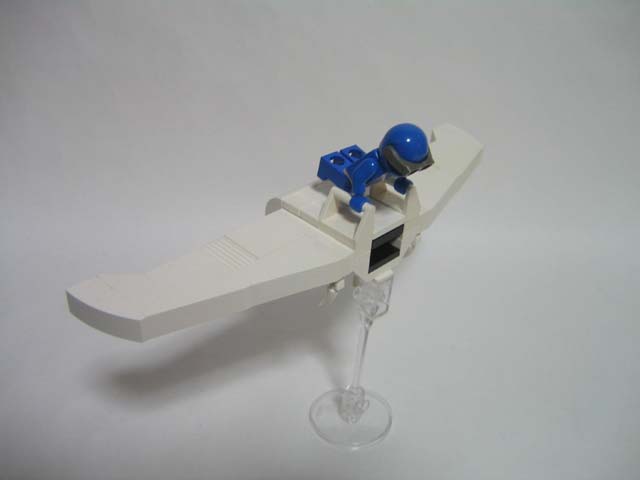 I like the little Ohmu in the fourth image in the gallery, as well as comic’s use of the submarine bubble as the Ohmu’s eye that Nausicaa gets from the forest. My only suggestion would be to use this torso for Nausicaa instead of the plain blue one. But maybe the plain blue works — I’ve never entirely liked the Nausicaa minifigs I’ve made myself… 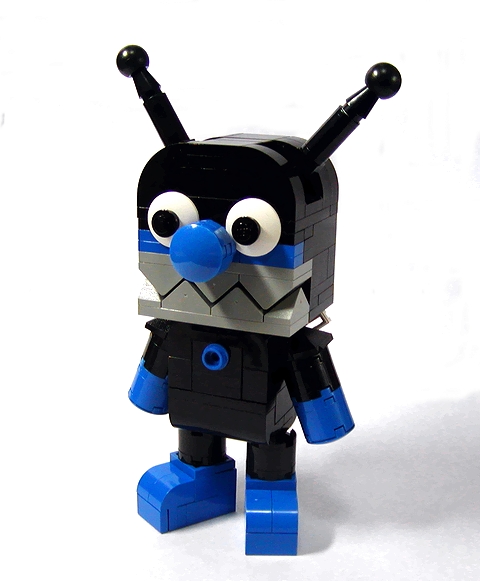 Technorati provides various tools for people interested in blogs. Technorati’s main feature is its search capability, and the site indexes more than 23.5 million blogs on the Internet. By “claiming” a blog (Technorati verifies that you’re the blog owner), you get access to more tools, including the ability to apply tags to your blog.

What’s interesting is that Technorati also displays your blog’s rank in the blogosphere, based on the number of incoming links to your blog. As of December 21, 2005, “Dunechaser’s Blocklog” is ranked 243,828. Out of 23.5 million, that’s not too shabby! Woo hoo!

Thanks to my graphic designer friend Sky, Pan-Pacific Bricks now has a cool new header graphic.

For a blog about breaking down barriers between LEGO cultures across the Pacific Ocean, I thought a minifig from each of the uniquely American and Japanese themes would be appropriate. Thus the cowboy and the samurai, from the Wild West and Ninjas themes.

I like the slightly faded background behind the minifigs, and how the horns on the samurai’s helmet overlap the frame at the top of the original image.

Thanks Sky, you make good graphics!

Sugegasa has just posted a sinister-looking minifigure called “Fig-9” (okay, so all of Sugegasa’s minifigs are numberd, but “Fig-9” just seems like an appropriate name for this one): 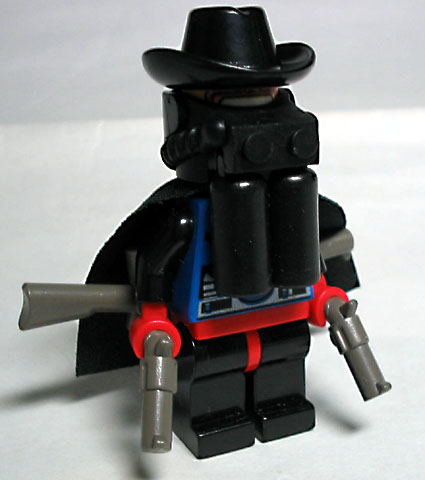 “Fig-9” would fit in well in the Tech West theme. I wonder how Sugegasa attached the rifle behind the fig?

Japanese figure skater Mao Asada, currently in first place (Washington Post – requires registration) in the ISU Figure Skating Grand Prix Finals being held in Tokyo, is apparently a LEGO fan. According to her official Web site her hobbies include jigsaw puzzles and LEGO.

What set Japanese bloggers buzzing today was the one item she picked up off the ice after her routine — a LEGO bag.

EDIT (12/22/05): Mao Asada won the Grand Prix championship on December 17, but will likely not be allowed to go to the Olympics in Turin early next year. But wait, there’s good news! Here’s a quick translation of the first paragraph from a follow-up article in a Japanese newspaper:

Mao Asada: Reward for winning is ‘LEGO’
Mao Asada (age 15), who won the Figure Skating Grand Prix Finals for the first time, participated on the 19th in a press conference for Japanese National Championship (12/23-12/25) entrants. “I’m going to do two Triple Axels,” she said enthusiastically. In the midst of the discussion on the age limit that may prevent her from entering the Olympics in Turin, she innocently exclaimed, for winning the Grand Prix Finals “I’m going to get LEGO blocks.”

So her LEGO hobby is even showing up in sports section headlines! 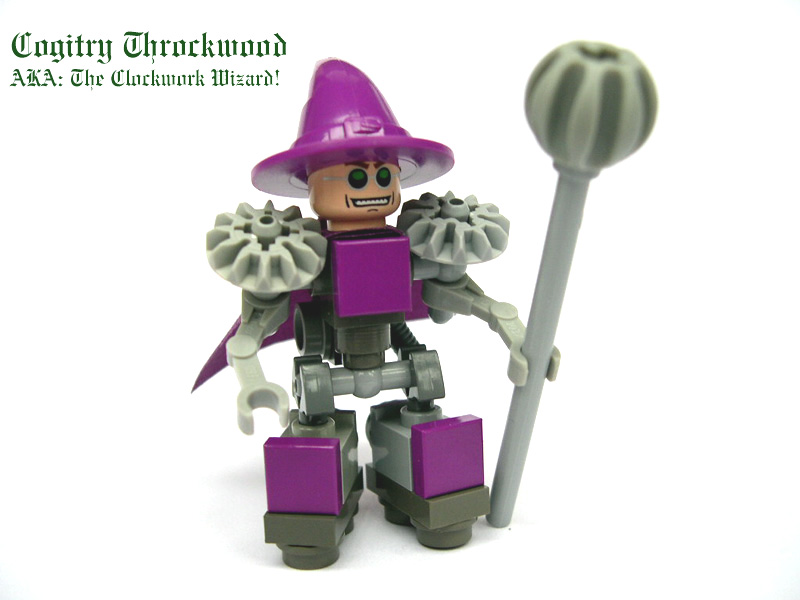 Great use of Technic parts, purple pieces, and the Doc Ock head. And boy! Those pneumatic T pieces sure do come in handy!

Has anybody else noticed the uptick in really awesome brick-built minifigures lately?

This post collects all of the Brickshelf galleries and Web sites I’ve found that feature LEGO creations by Japanese builders. I’ll update this list (and alphabetize it at some point) as I encounter more. If you have ideas for galleries or sites that should be listed here, feel free to drop me a line at dunechaser AT gmail DOT com.

Incidentally, Sachiko Akinaga’s site, Let’s LEGO, has a great link list as well. Her site includes an English version, so navigating it is a snap!

Mike “Count Blockula” Crowley has made a Martian based on one of the best bad (you know what I mean) movies of the last ten years, Mars Attacks:

The ray gun is sweet!

fig– contraction of the term minifigure for the AFOL, a yummy treat to the muggles

peladofigphobia– fear (or loathing) of minifigs with an exposed stud on thier head.

Hi, my name is Andrew and I’m a peladofigphobiac.