Pictures of an upcoming Lego Architecture has surfaced for 21017 Imperial Hotel. There’s no word on the price or release date, but you can find more pictures on Eurobricks. 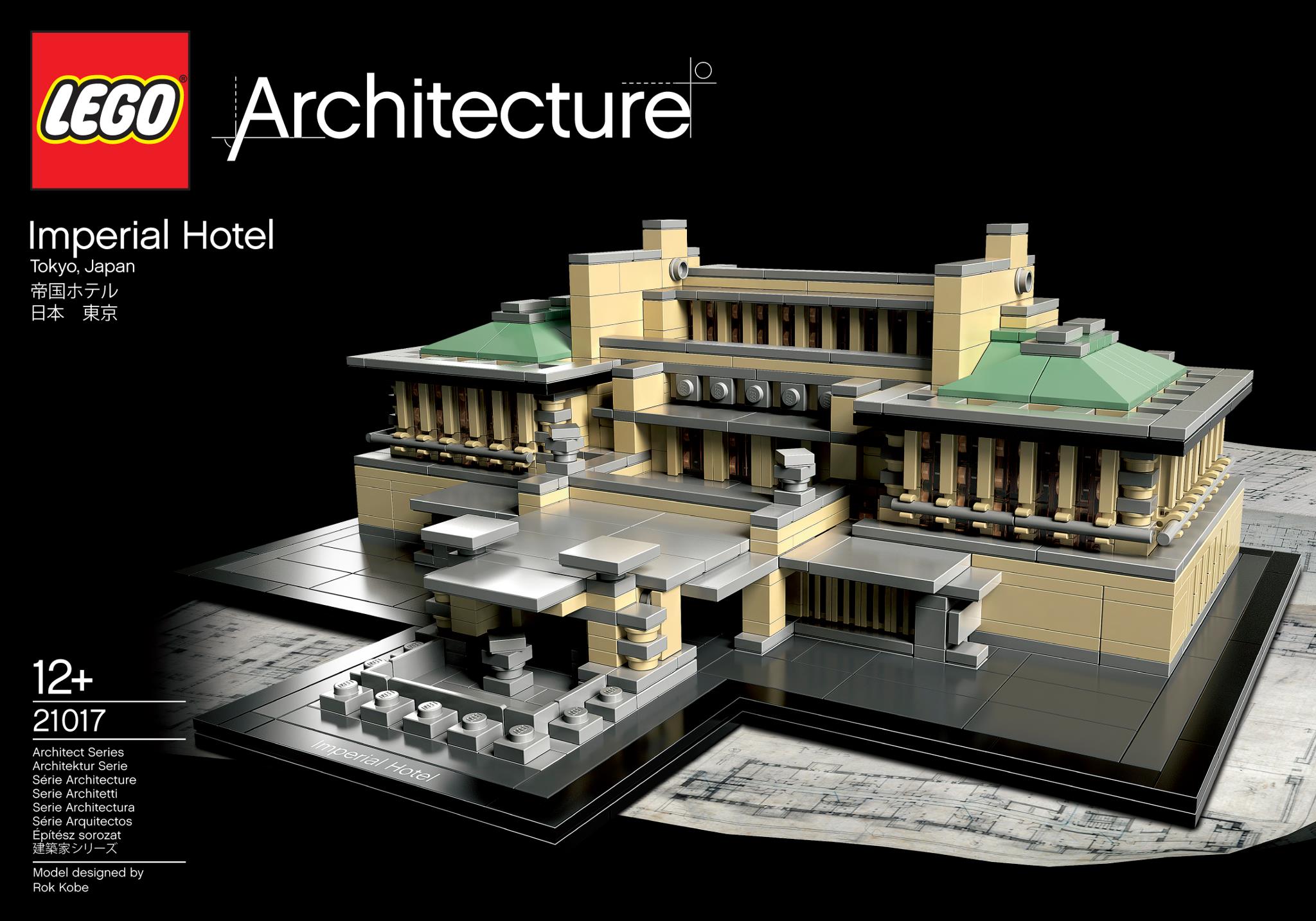 Edit (AB): A few notes about the real-world building: Frank Lloyd Wright designed the Imperial Hotel in Tokyo, and construction was finished on the Maya Revival-style complex in 1923, just in time for the Great Kanto Earthquake that same year. The structure survived, though with some damage, ultimately having to be torn down several decades later. This will be the first LEGO Architecture set inspired by a building in Japan.

Jerac‘s TIE fighter is a realistic and elegant take on the iconic Star Wars ship. The combination of the round corner bricks and the printed dish makes for the best cockpit design I’ve seen for the TIE. 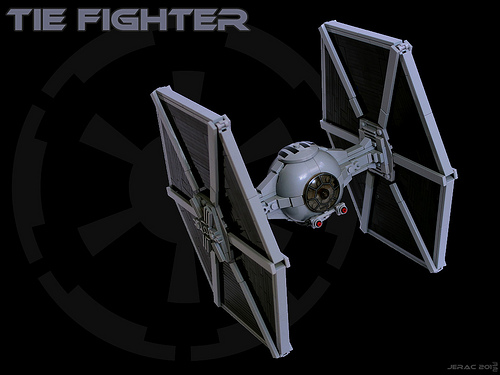 As a young Train-head, this week’s builder is a rare beast among our tribe. You may know Matt Hamann from his fine assortment of model engines and rolling stock or from his entertaining writing on the Twee Affect, but you’re about to know him much better. I sat down with Matt on a bicycle made for two about halfway through the Wabash Cannonball Trail in northwest Ohio. We talked about Los Campesinos!, Huffy vs. Roadmaster and the persistence of chain-slap.

KG: What is the most challenging thing about building trains? Where do you stand on the classic 6 wide vs 8 wide debate, and do you also pine for exotic track geometries and 9 volt engines like so many Train-heads?

MH:  The most challenging thing about building trains is that you have to recreate something out of a building toy. When building other themes, that is not always the issue since you are working from concept art or your imagination, unless, of course, you are building a scale model of a spaceship from a space opera, or an all terrain vehicle from a movie about dinosaurs. Modern locomotives have odd-shaped details everywhere and weird angles that do not translate easily into Lego; steam engines had greebles everywhere and moving bits that the builder has to selectively compress, yet still be able to make the model identifiable, not to mention that most steam engines are matte, whereas most Lego parts are glossy, which adds another challenge. But that is not to say that one is easier than the other; it is still a challenge to simply create something that is not yet another fighter ship or pile of grey bricks with a parapet, gate, and all your minifigs lined up perfectly in the courtyard.

I build 6 wide trains. When I joined my Lego train club in 2006, it is what my club mates were building and what our layout is scaled to. Bigger trains would just look silly among all the small buildings and cars and I am not about to start my own layout, not in this decade, at least. Bigger models can also be more parts intensive, which, depending on the model’s color and what pieces you are using, can be more expensive than building a smaller models. That point is especially important to me because I am (for now) a full-time student with only a part-time job. More and more I would rather spend my money on things other Lego, like camping gear and stuff for my touring bike, so to build smaller, less expensive models lets me keep doing both of my hobbies. I also like to be able to pull about 30 train cars with just two 9v motors, on unmodified wheels and transformers. Power Functions is changing that, but with the current system, you can’t beat light weight 6 wide trains if you are going for pulling the most train cars. I won’t say that building 8 wide is any easier than building 6 wide or visa-versa, if both are done right. Building a smaller model means selectively compressing more but you have the convenience of a lot of train specific parts (windscreens, grilles, etc.) that are mostly designed with 6 wide in mind. 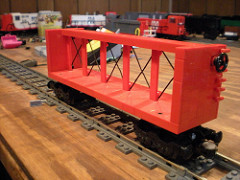 If I had my own layout I would probably pine for a better system of track. Right now I don’t. I know for sure that my layout wouldn’t be 9v. 9v is dead. Power Functions is (supposedly) less expensive than 9v, which helps keep Lego in business, which keeps us AHOLs happy. Power Functions also does not have the connectivity issues that 9v has. Every little break between the tracks means lost current, so on large layouts, you have to have multiple power drops. If I had the resources I would probably build my layout to be in scale with 7 wide trains, since they are the best of both worlds.

KG: Many builders claim that Lego is a great stress-reliever. Do you find this to be true, and if it is, why do so many people seem to get stressed about it so easily?

MH: I am melancholic when I build. It feels great to be struck with inspiration, to solve problems, to finish a model, and to get good feedback and have discussions with other AHOLs, but, since I am so anal retentive, it can be stressful not to come up with a solution for a gap here or the funky dynamic brake blisters that GP7s and GP9s had. It can also be stressful to source the parts that you need, especially when they only came in a $50 Star Wars set from the mid 2000s and you need 20 when only 2 came in the set, in a color that Lego doesn’t make anymore. That scenario seems to happen a lot. With the financial involvement and the contrasting dogmas. it is really no wonder that people stress out.

KG: You’ve tried your hand at Steam Punk, but you failed to embrace many of its popular conventions. Talk about the theme, the good, the horrible and what direction is ripe for exploiting. 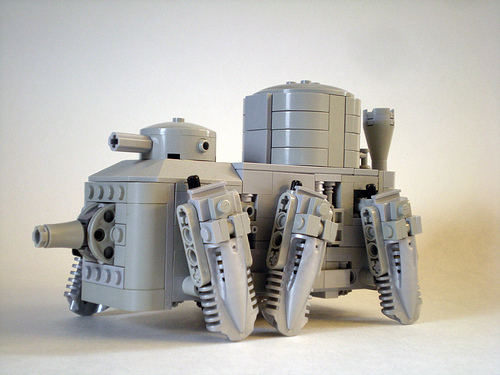 MH:The popular themes among fans draw inspiration from everywhere. Space builders draw inspiration from all the popular movies and series, train builders from the world’s trains, and castle builders from history, fantasy, and mythology. Lego steampunk seems like a giant circle jerk. Instead of looking outside of their community of practice, they have created an inbred style. That is not to say that there shouldn’t be common themes in the style, but that there should be more variety. Put away the parts from your Prince of Persia sets and your Jawa Sandcrawler and tear open those Power Miners sets that, for whatever reason you still keep sealed, and introduce some lime green to your build! Steal some of the Scala and Belville that you gave your daughters and put some light yellow and aqua your model! Look to World War One and interwar vehicles and aesthetics for inspiration. Most Studio Ghibli productions are a great source of inspiration.

END_OF_DOCUMENT_TOKEN_TO_BE_REPLACED

Elliott Feldman‘s diorama is an example of the unhindered mind at work. At first glance I passed this MOC as another castle creation, but the builder reminded me to take another look, which quickly revealed subjects from different themes mashed into the diorama. It even features a spoof on Super Mario and Halo. Take a look at more pictures on MOCpages and see what you can find on this packed scene. 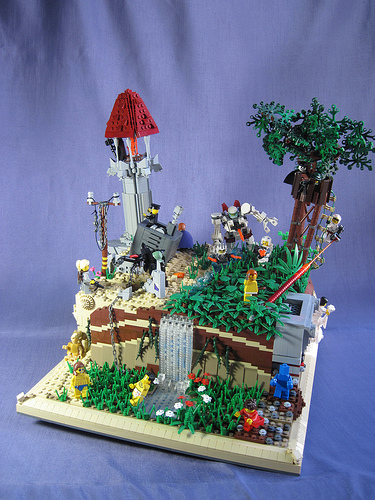 Each year lots of traditional castles spring up for the Colossal Castle Contest on Classic-Castle.com, but there are a few that depict more exotic themes in the LEGO Castle theme, such as Fianat‘s Ras-al-Jabar, which displays a set of great-looking Middle Eastern architectural wonders. 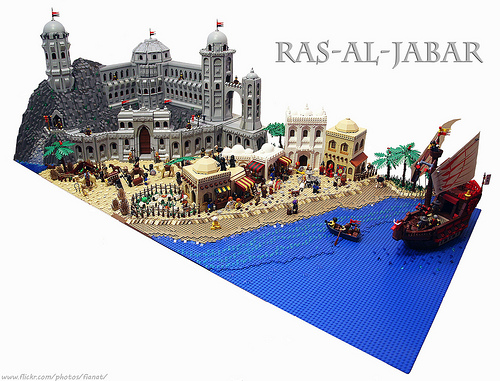 END_OF_DOCUMENT_TOKEN_TO_BE_REPLACED

Chris’ (Ironsniper) AV Transport Truck is an example of a model where no piece is wasted. He says that this was a morning power-build, that is some efficient building! The more I look at this, the more I love it. The sleek near-future style with the clean colour scheme and simplistic cargo all come together so nicely. 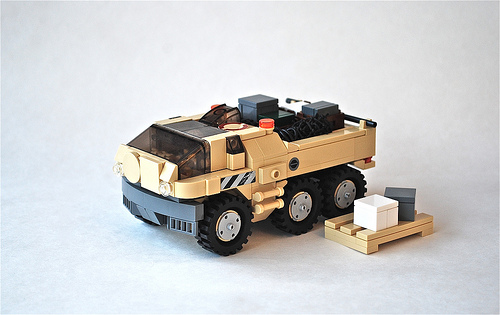 Every time I create something out of LEGO, I try and do it in such a way that every piece has a purpose. I don’t think I have achieved this yet, but Chris’ model makes me want to try harder.

Colorful, whimsical, and now practical, these are the words to describe Tyler’s (Legohaulic) Christmas present for his sister. The robot parts are pinned to the backboard and can be rearranged to create endless possibilities. 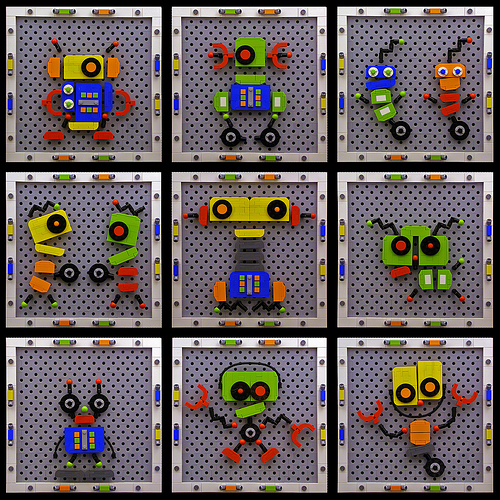 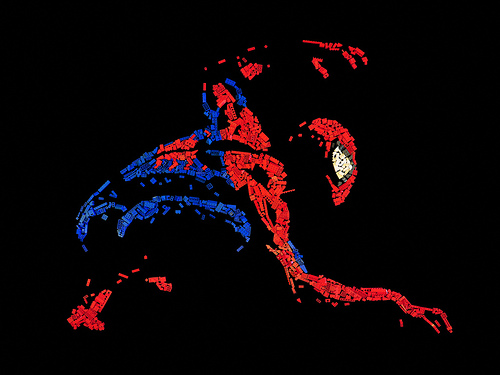 A picture of the next modular building was discovered on Lego Shop at Home of 10232 Palace Cinema. There’s no word on the release date or pricing, but I suspect it will be available sometime in the spring, which is the usual release time for modulars. 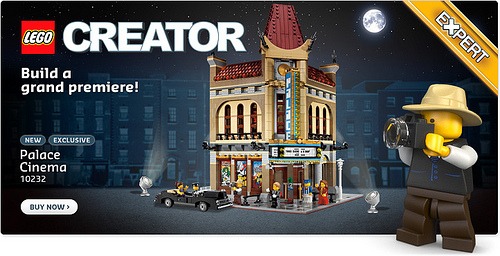 Pate-keetongu did a fantastic job of making Bioshock’s iconic Big Daddy. The use of the large Technic ball on the head is perfect. 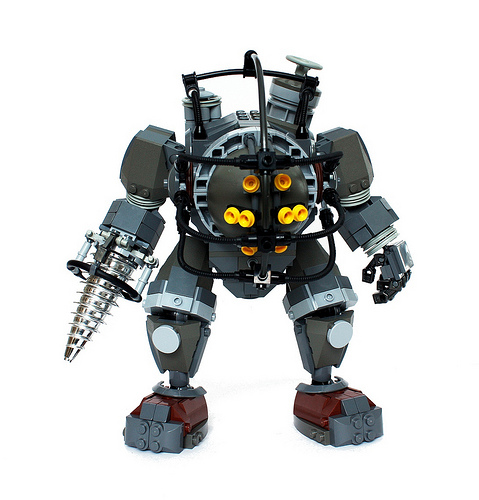 Bart De Dobbelaer‘s latest addition to his picture story of the Hive shows a massive lair. The lights and fog on top of the intricately designed structures make this one of the most atmospheric Lego photos I’ve seen. 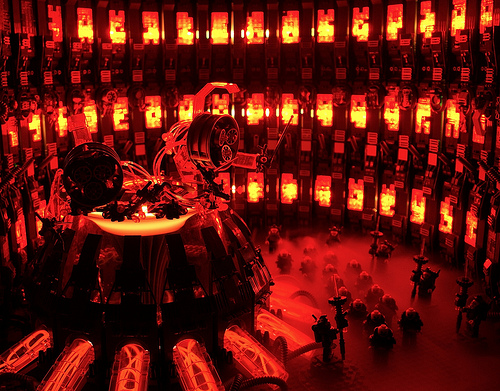 It may already be gone by the time you read this, but in case it’s not, 21102 LEGO Minecraft

is back in stock at the LEGO Shop online.