We’ve featured a lot of big ships recently, what with it having been SHIPtember and all, but they’ve all been the space-faring kind. If you want 100-stud long behemoths that sail the seas rather than the stars, it can be a month of false dawns. Isaiah Durand is here to save the day with this frankly jaw-dropping beast! Christened the Buccaneer’s Dread, it took three years to plan and build. It’s almost as long as it is tall, at a whopping 4 foot 3 inches, or 1.3 metres for the metrically inclined. That’s the height of a small child! 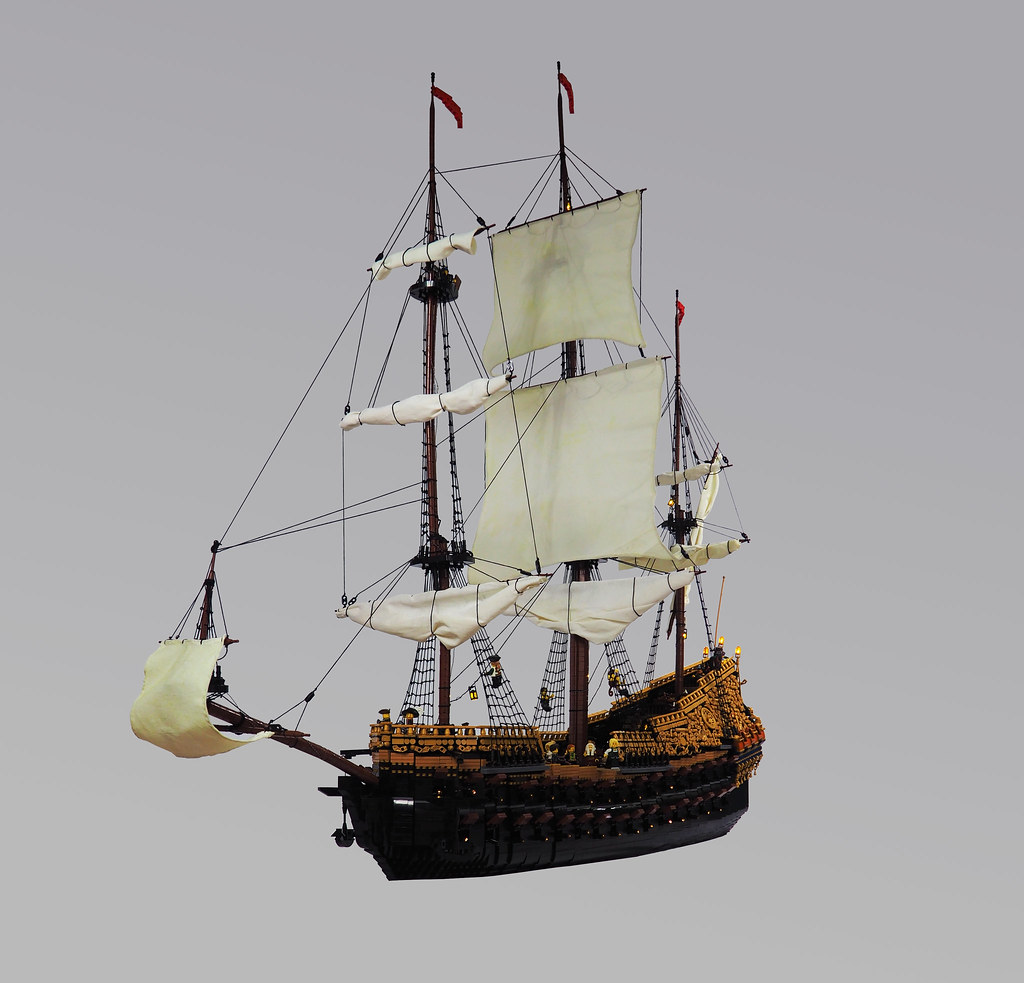 There are some minifigures in the above picture to give you a sense of scale, but it doesn’t really do the details justice. END_OF_DOCUMENT_TOKEN_TO_BE_REPLACED

Jan Woznica has engaged in a little bit of meta-LEGO building with this mosaic style recreation of a classic treasure map tile. All the major details are perfectly captured, from the compass to the latitude and longitude lines. I think mosaics of classic prints could spark a new MOC trend thanks to the near-endless possibilities…computer screens, instrument panels, license plates, wanted posters. What printed tile mosaic would you want hanging on your wall? 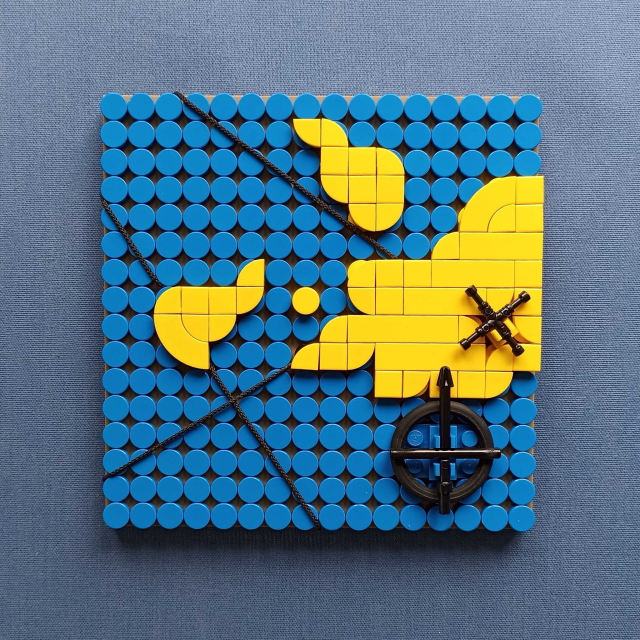 If it hasn’t been clear from past articles I’ve written on here, I am a humongous fan of micro LEGO builds. I probably build within an 8×8 stud area more often than not anymore. And I am absolutely gaga for these connected micro scenes by Louis of Nutwood. Depicting some of the classic tropes from high seas adventures, this quartet of vignettes shows the vessel, the fortress, the kraken, and the remote island. Each of the scenes lives in its own black box, reminiscent of those from the succulents LEGO set. But those boxes are then linked via waterfalls, connecting the disparate parts into a whole story. While there is some excellent parts usage throughout, some of my favorites are the cannons on the fortress and the texture-filled tree design. 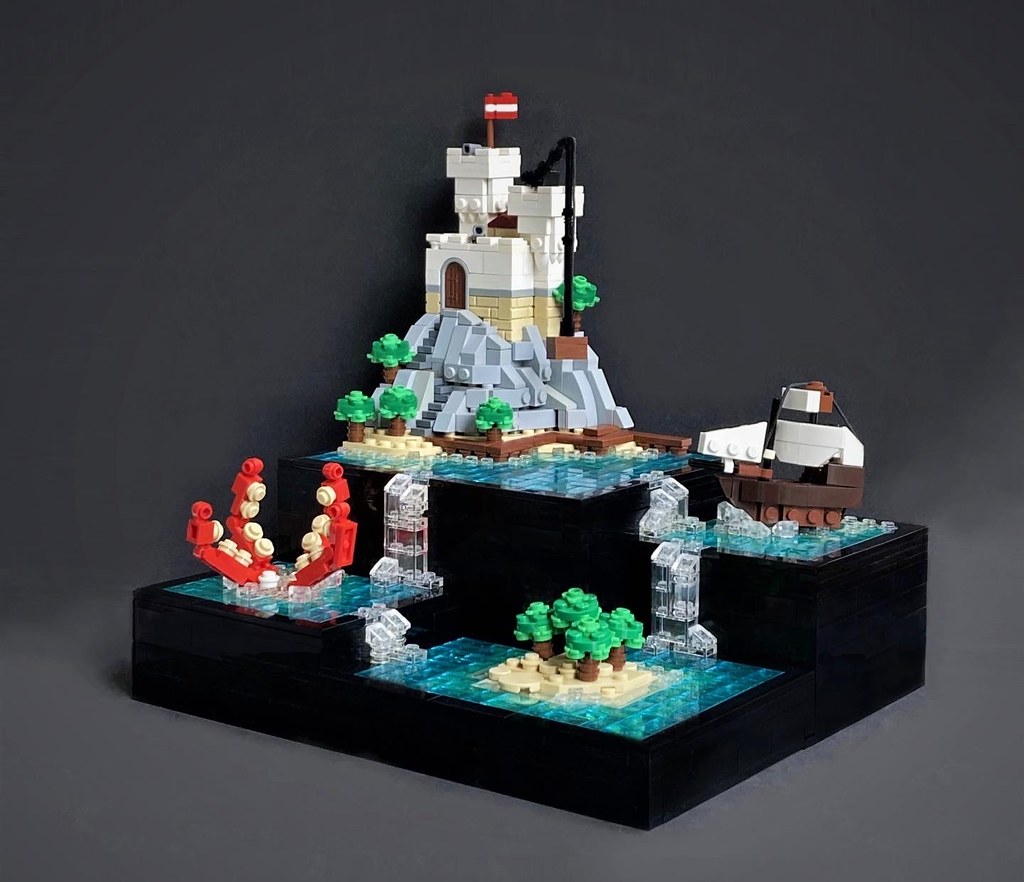 Behold the mighty Hermit ship, constructed of LEGO by Thomas Jenkins! What happens with a bunch of little crabs team up with a giant hermit crab with a ship for a home? They all turn to pirating the seas, gathering all the goodies they can in their claws and stowing it away in the ship. They make use of the old ship’s stores to outfit themselves, and they roam the ocean floor looking for their next haul. The build before us here is adorable and colorful, giving a sense of whimsical adventure. Good usage of Bionicle and Hero Factory parts give the hermit crab form. The ship makes use of Technic parts for the bowsprit, and some nice slopes for the curving bits of the keel. The crabs make use of pirate tools, though the one atop the forepeak makes use of some scissors to cut opponents down to size. 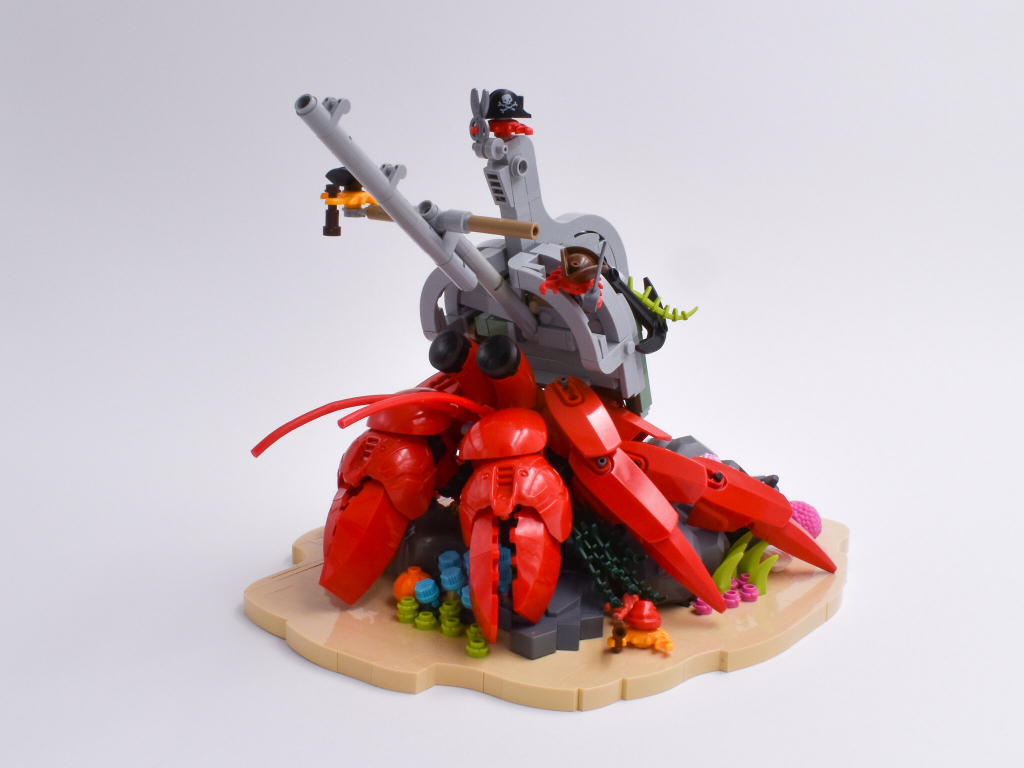 The biggest issue with stowing loot in a broken ship? The cargo hold doesn’t exactly hold anything, as seen with the treasure chest being left behind. From this angle we can better see the details of the broken ship. Meanwhile, life in the sea continues as the pirates pass by. Fish swim around the coral and another crab goes about its life instead of joining the buccaneering crew. 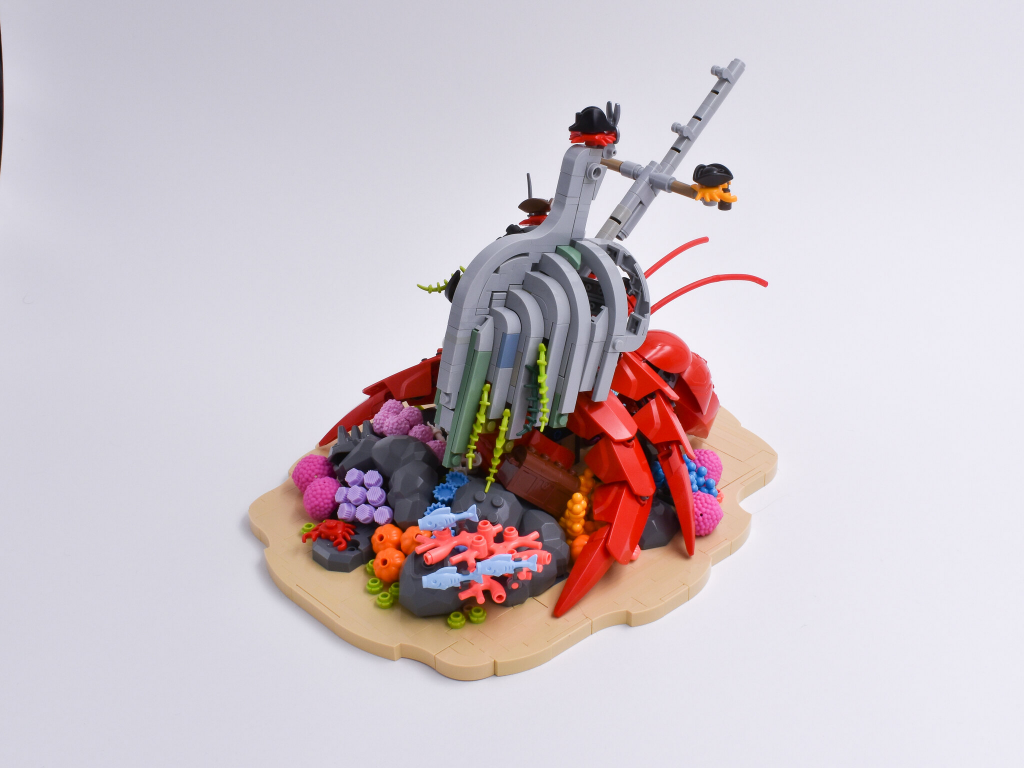 The ongoing Pi-rat competition has yielded a lot of interesting pirate ship builds. But Bard Jaskier has gone in another direction and constructed a brick-built buccaneer with a treasure chest full of delicious Swiss. Bard’s mousey marauder is not just adorable, but makes good use of pirate ship pieces, like the crow’s nest barrel halves that make up the legs of his shorts. 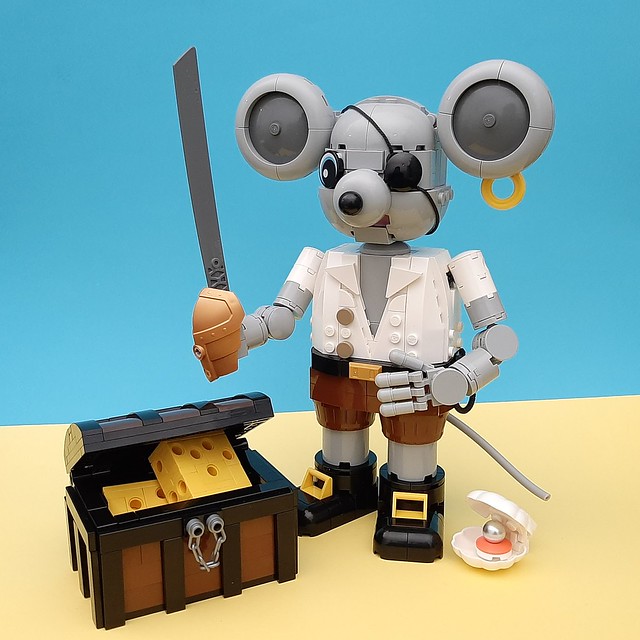 We love a good pun here at TBB, almost as much as we love awesome LEGO builds. So when you create a bathtime-themed pirate ship crewed by the Rubber Duccaneers, it’s going to grab our attention. As you can see, Random Vector has done just that! This build is chock-a-block with charm. Aside from the excellent wordplay in the title (seriously, I’m a bit jealous of that one), Random Vector has really committed to every detail here. Of course there’s the bathtubs that double as pirate ships, but equally the rubber ducky figureheads are a cute touch that unifies the three vessels. The bathroom furniture on the flagship consists of a shower head at the stern, and a plug doubles as an anchor. Genius! The bubbly setting is so effectively done using various transparent pieces, and really elevates this build from good to great. And, naturally, these cannons fire bath bombs, not cannonballs. So if you don’t want to get hit by one… Duck! 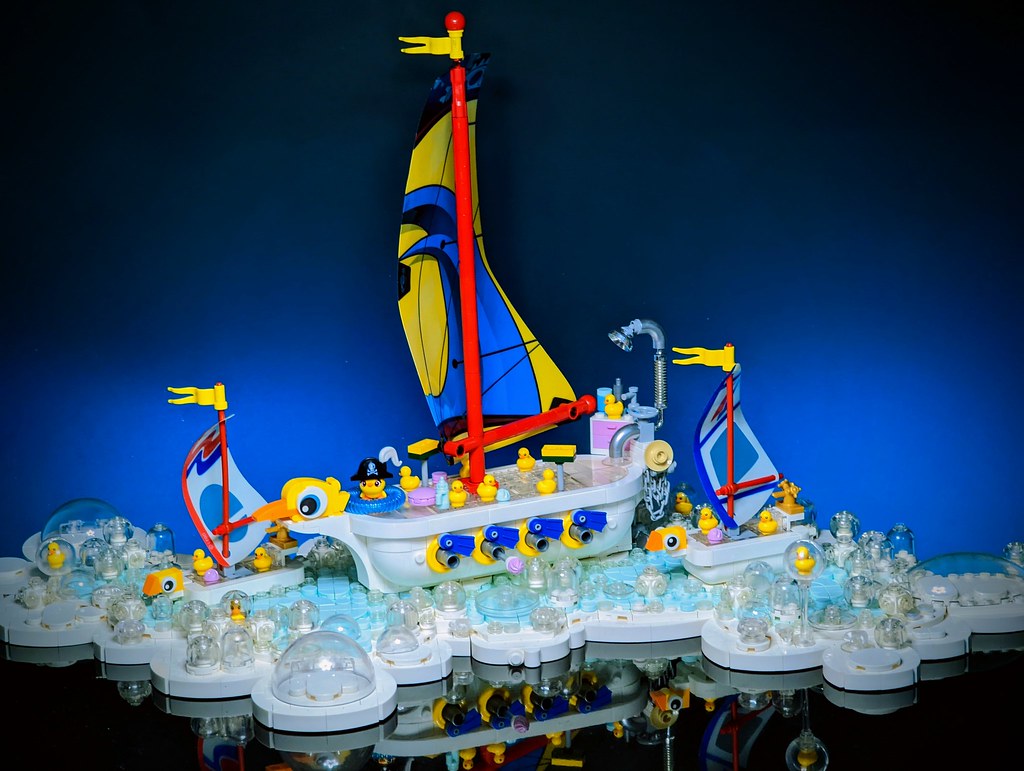 This LEGO pirate ship build from Julius Kanand brings a whole new level of fear to the phrase “beware the kraken”! Captain Kraken and his roving band of Marauding Mollusks aren’t taking guff from anyone. They roam the seas, hunting for unfortunate ships to prey upon. Even those who think there’s a path to escape lose hope and limb to the terrible tentacles of Kraken’s ship. Some say the ship is a living organism, others that it’s just a lot of mechanisms. The truth can be found aboard the ship, but none have returned to speak of it! The skeleton of the ship is based on the Pirates of the Caribbean ship the Silent Mary, but the rest of it is from Julius’s mind. 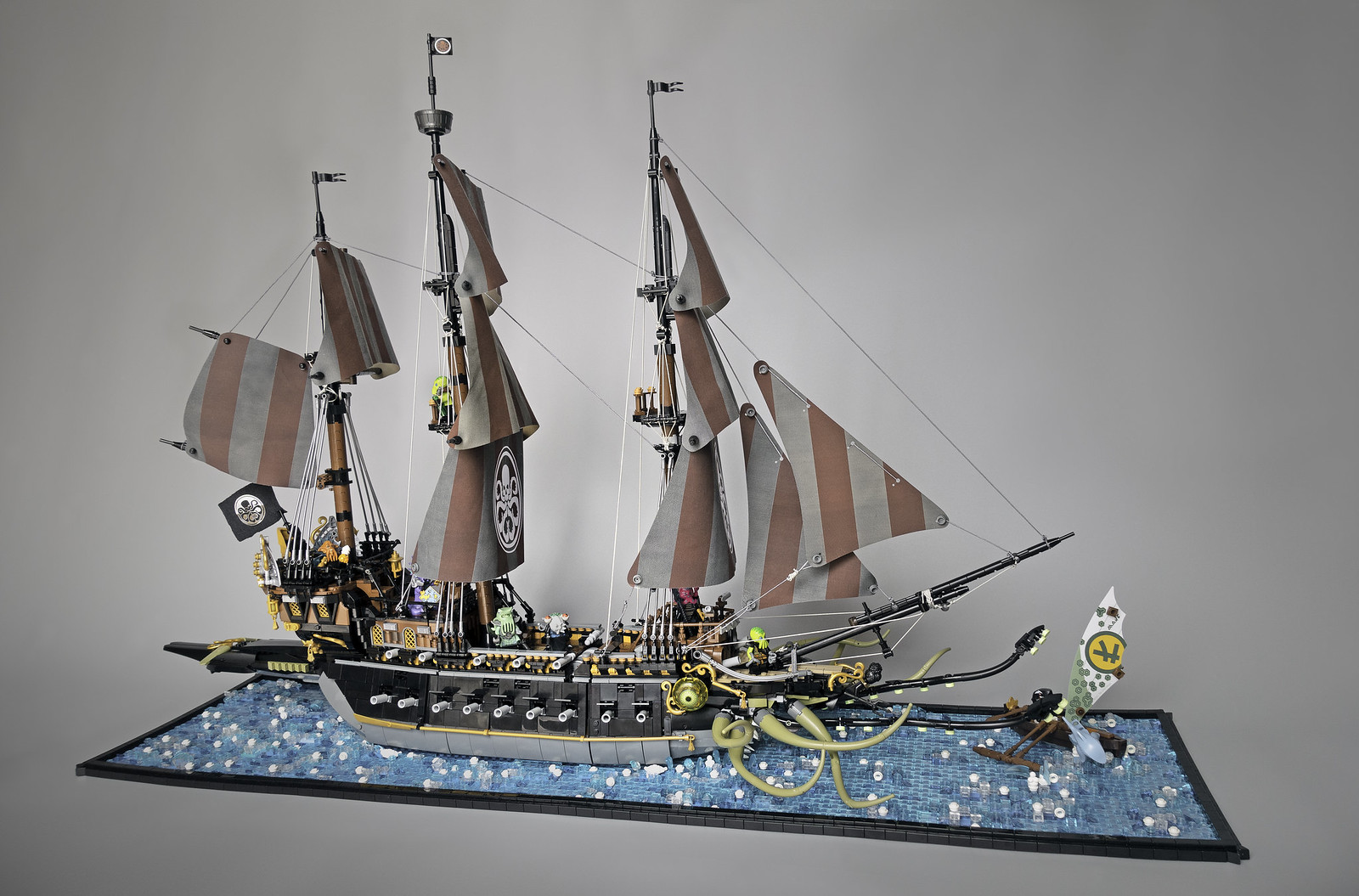 The squid-like shape of the ship is really cool! You’ve got the point of the head with the extension coming off the stern. Then, there’s the bow of the ship where the squid comes to life with big eyes and a bigger maw! Using some technic pieces, the ship’s tentacles reach out and grab the soon-to-be-eaten ships it preys upon. Taking a closer look at the mouth reveals rows and rows of sharp teeth ready to feast! Built in about two months, this ship is mighty impressive. Just, you know, be careful around it or it’ll eat you. 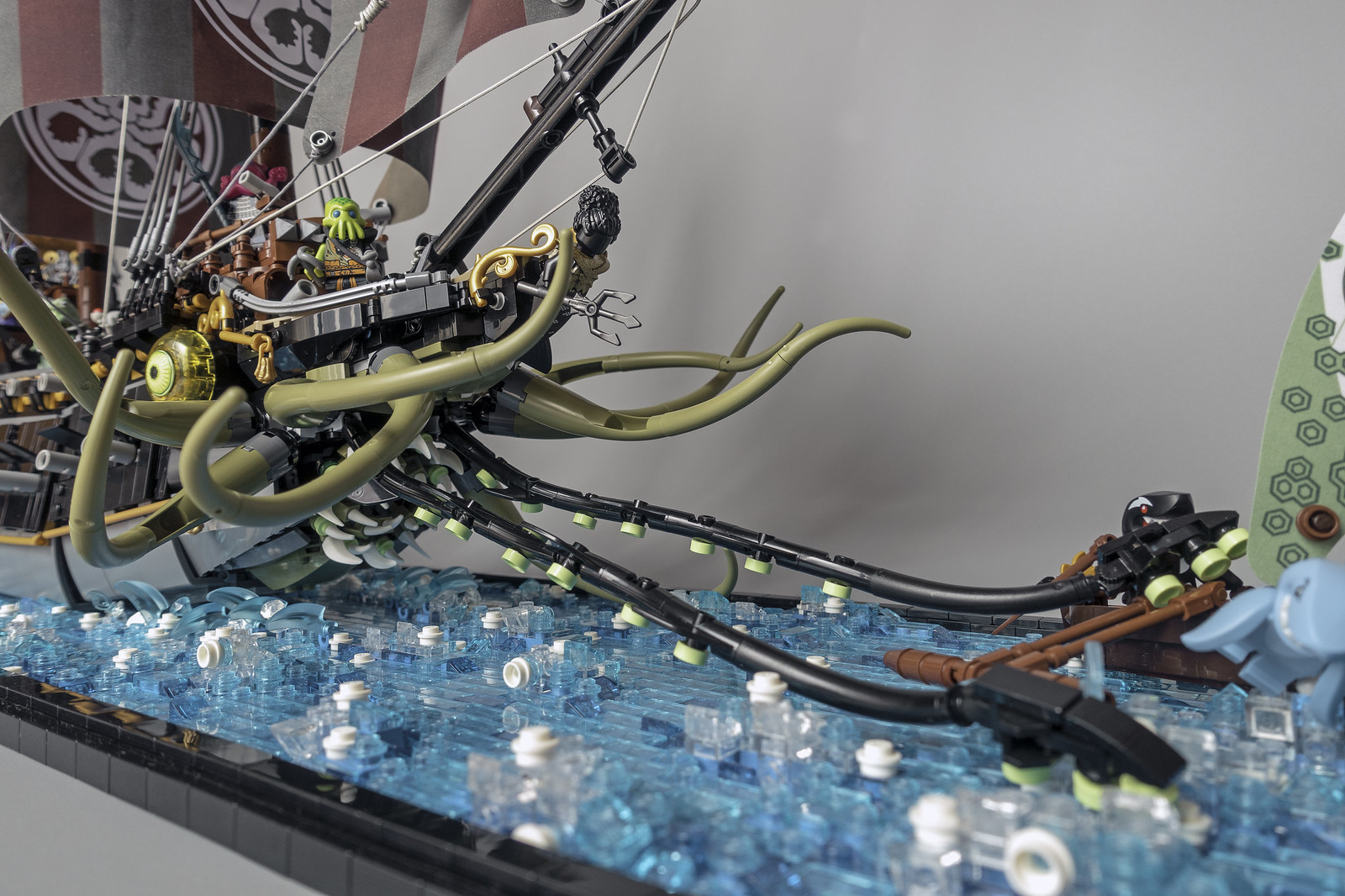 Hide your LEGO gold, daughters, and your catnip as Cecilie Fritzvold’s pirate cats are sailing the seven seas looking for treasure or maybe just a little saucer of milk. This motley crew is traveling on their majestic vessel, The Cheshire, looking for the fabled Lucky Cat Island. Led by their brave captain, the crew of brick-built cat pirates appears to include some dodgy characters that each embody what it is like to be a fearsome pirate. I bet these kittens aren’t afraid to get their tails wet! 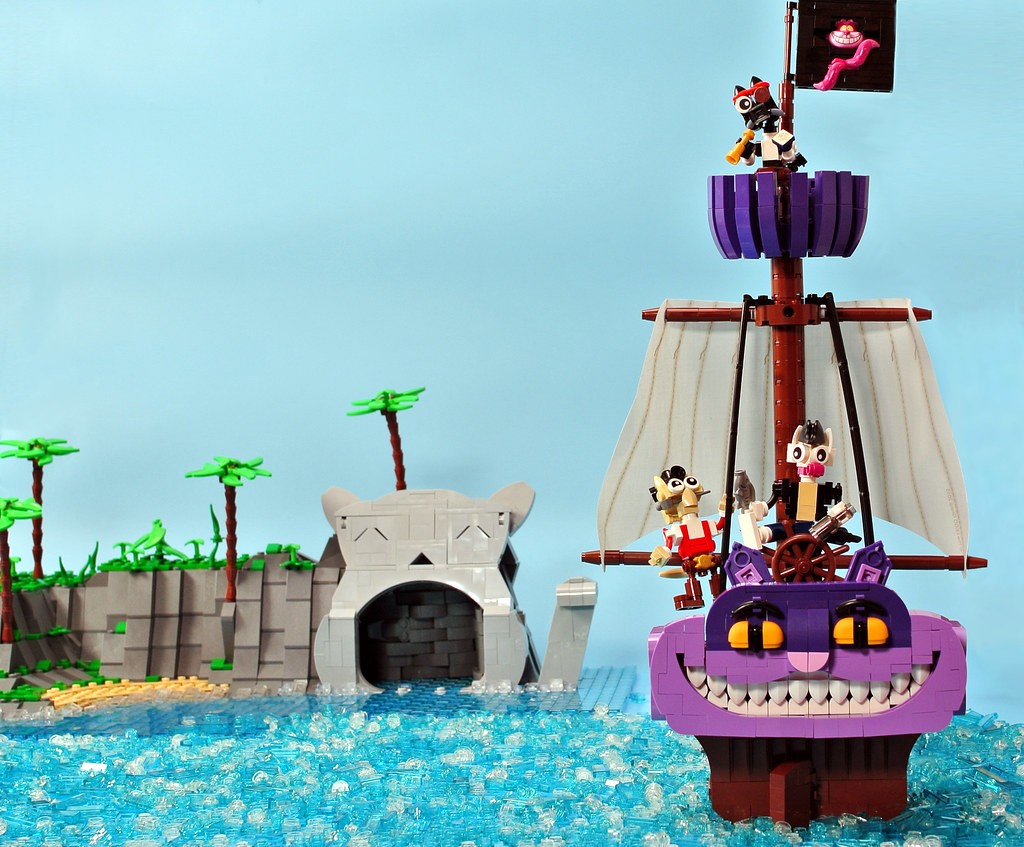 This reimagining of the classic LEGO set 6276 Eldorado Fortress comes to us from the mind of ArmoredBricks. Like the original set, this new take features the yellow bricks that no doubt give the fortress its name. Of course, there is another possible source for the fortress’s name–the treasure kept within its depths. There has to be something to draw Captain Redbeard and his compatriot to the defended structure. Up above, overlooking the courtyard and front walls, is Governor Broadside with his crystal goblet, quite sure of the treasure’s safety. The fortress itself is much larger than the original LEGO set from 1989. It can no doubt fit a full contingent of soldiers to protect against pirates. Its architectural details stand out better here too, from the towers to the archways. I personally enjoy the use of orange with the yellow on the supports by the incoming pirates. END_OF_DOCUMENT_TOKEN_TO_BE_REPLACED

Leave it to to Ralf Langer to draw inspirations from pirates and turn it into a surreal work of art using LEGO as the medium. We see two figures in a boat rowing across the sea. In the middle of the sea there is a square frame almost like a window in a wall. 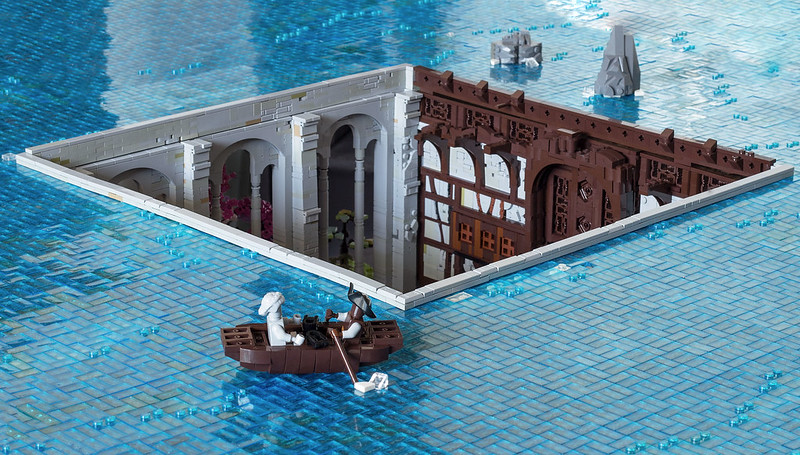 We can see two of the four sides of the frame and they show us two completely different worlds. One of them is a Tudor style building that we’ve come to know and love when it comes to Ralf Langer creations. The other one is a stone temple hidden in the midst of an enchanted forest. The two figures in the rowing boat represent inhabitants from these worlds. This is highly interpreted but my guess is they are lovers from two different worlds who are eloping. I might have over romanticised this a bit though.

The talented Faëbricks has created this intriguing build which shows a young boat builder who dreams of one day traveling out to sea in search of fortune. The frame of a boat is embedded into the sand, as the adventurer carries wooden planks over to the construction. One of the most eye-catching features of the model has to be the waves; teeth pieces form part of the white foam which is surrounded by clear wedges providing this section with a realistic look. 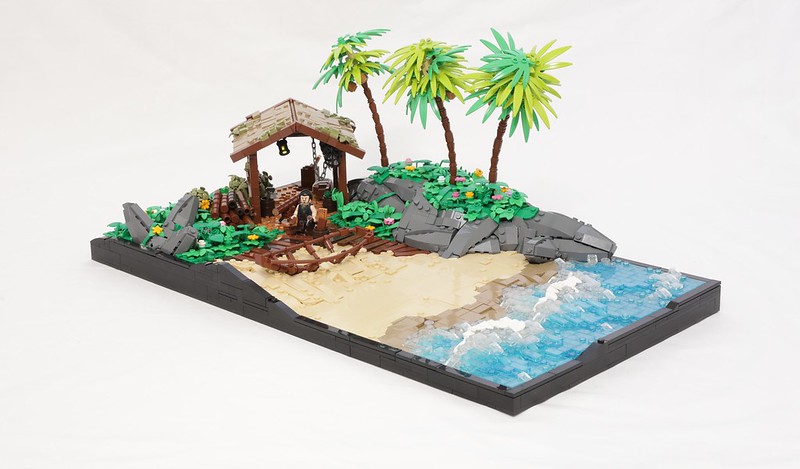 Faëbricks has even created a video, demonstrating the intricate details of the diorama.

In 1975, Stephen Speilberg (and to a lesser degree Peter Benchley) made the world afraid to enter the water when the unsettling movie Jaws came out. How do you top that, exactly? Well, LEGO builder Julius von Brunk may have figured out that formula. You simply go larger. He may have arrived at that success quite by accident; the shark turned out much larger than anticipated so the “normal” shark attack scene he thought he was building became an encounter with the prehistoric Megaladon. The protagonists (or are they antagonists?) are a group of pirates proving that a pirate’s life isn’t always yo-ho-ho and a bottle of rum. The water, and especially the shark with its complex curves, are done to great effect. However, as enticing as a deep golden tan and a breezy cocktail may be, this is one beach I’d much rather avoid! 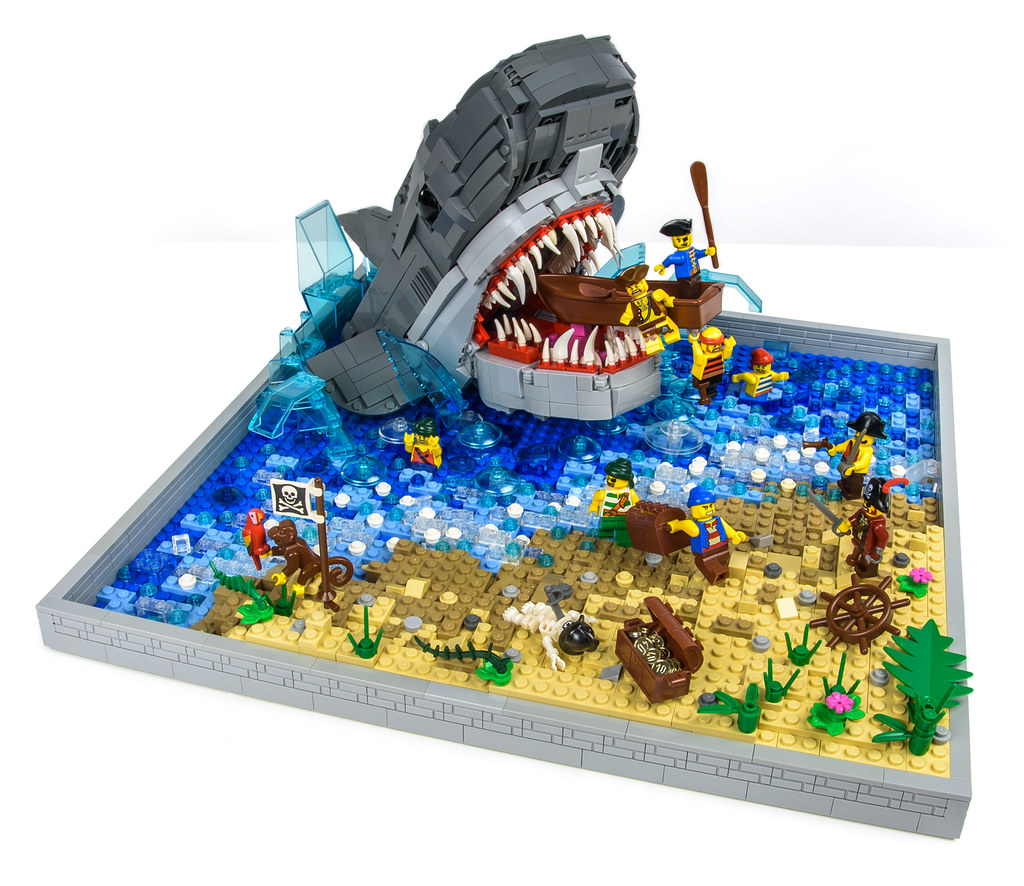