OA KD has a real knack for taking unusual LEGO elements and working them into brilliant Classic Space homages. Last time, a Duplo windscreen did its duty on a massive cargo freighter. This time, a Belville tent frame from 5846 Desert Island forms most of the hull of a tiny fighter. While white isn’t typically part of the Classic Space color scheme, the effect works here thanks to all the dark gray provided by that beautifully-textured background. 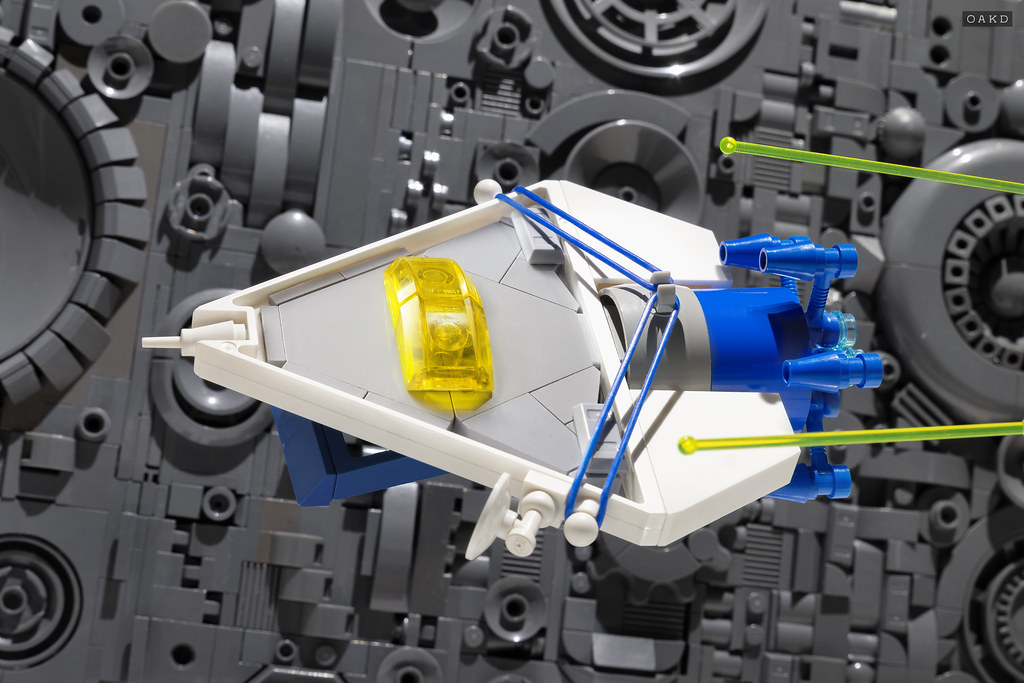 Silly turkeys were on the menu for a recent Fun Friday group build, and Tommy Frost took his contribution into orbit. This Neo-Classic Space themed turkey mech is suitable for navigating alien terrain or walking the Macy’s parade route on a cold November morning. Bonus points for the red space suit getting an upgraded helmet, thanks to the Collectible Minifigures Series 23. 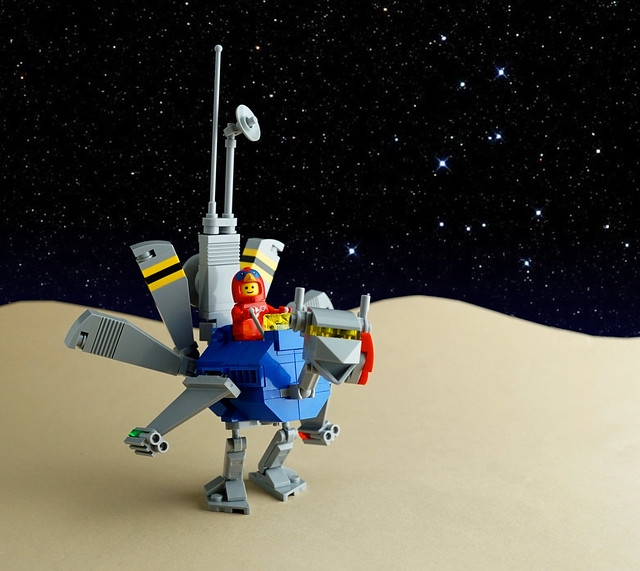 Alternate realities are all the rage these days. Consider, for example, the variant reality where Benny (the lovable 1980’s Spaceman from The LEGO Movie) was fixated on robots instead of spaceships. Psyro TtunTomato has been peering into this timeline and brings us a stunning rendition of Benny’s Titan Mech. The classic space blues and greys are there, as is the transparent yellow canopy we know to expect. But check out that arm rocket – a clear tribute to the 897 Mobile Rocket Launcher. I also love how Benny’s Space Squad is still ready to lend a helping hand as the ground crew. There are a lot of great construction techniques on display here – I’m particularly fond of the design on the feet and hands. Even the display stand is an interesting build, with integrated LEGO ingot elements creating a smooth-yet-greebled texture. I’d love to see this one animated…have they finalized the script for The LEGO Movie 3 yet? 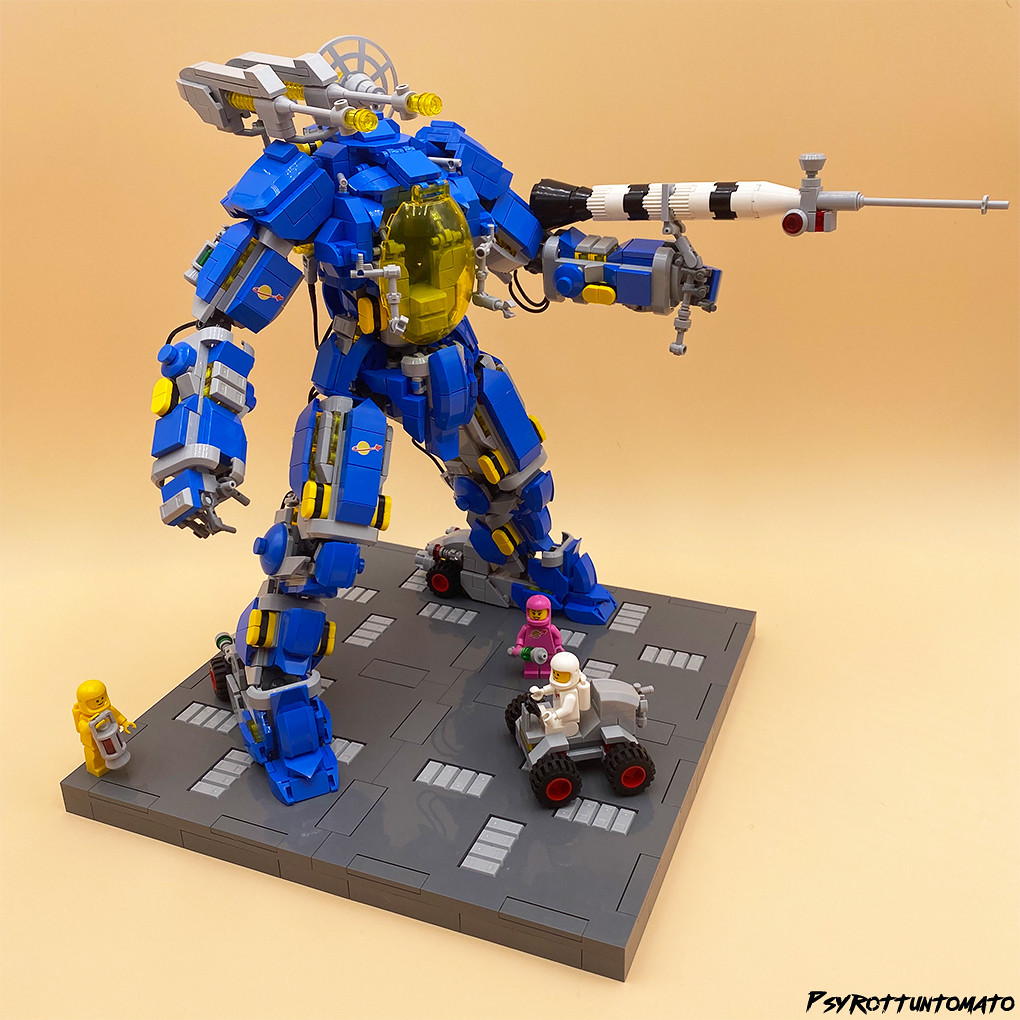 Classic Space Nostalgia runs high in our archive, too. A plethora of great Neo-Classic Space builds are just a click away!

When is a big space engine too big? Rubblemaker says there’s no such thing. He’s found an engine that’s bigger than his little space pod, and decided it needs two of them. The power-to-weight ratio of this thing must be off the charts! Despite their almost comical size, they do look great here, with some greebling inside and on the sides suggesting some very complicated internals. I guess if the engine is that big, you might as well fit whatever you can in there. I like the two slopes for the bumblebee stripes on the wings – it’s a bit of a different take on a feature that is a mainstay of Neo-Classic Space creations like this one. Can we call them wings? They do seem a bit small for that.. 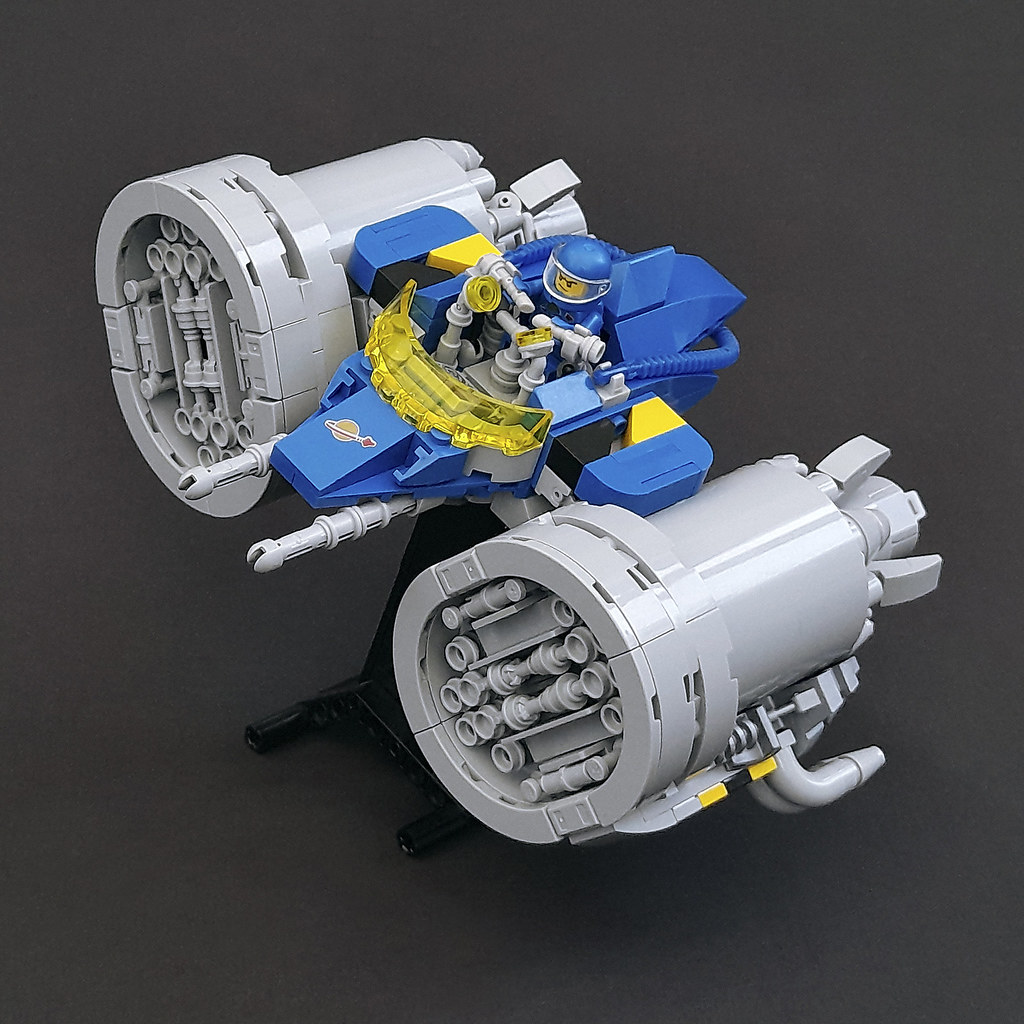 As another SHIPtember comes to a close, there’s a ton of massive builds to marvel at. But Pascal reminds us that a spaceship doesn’t have to be massive to be impressive. This Narwhal Scout ship packs a ton of things to admire into a small space. Complex angles, just the right amount of greebling, and a sleek, stud-less hull can do the job when a significantly huge investment in parts isn’t on the table. 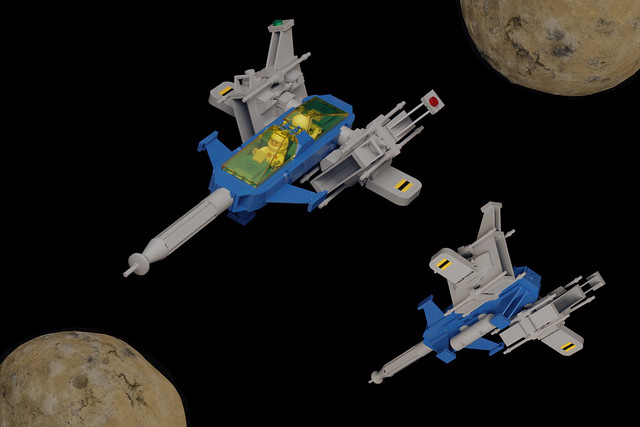 Throwing a Classic Space twist onto a concept design from Alien: Covenant sure is one way to do SHIPtember. Flickr Builder Space Kook brought their A-game this September with at least five different ships over 100-studs, either in length, width, or height. Jumping around between scales, Space Kook drew inspiration for their fourth build, the LSS Covenant. Taking design cues from early concept art of the USCSS Covenant Colony ship from the Alien movie, large solar panels flare out at the rear of the ship. Progressing further up the body, past the cargo holds, you’ll see a little fighter or drop ship peaking over the main hull of the colony vessel. Decked out in blue and yellow with white and black accents, the choice to craft this ship in Classic Space regalia allowed Space Kook a plethora of parts and design cues. Between the two references, it’s no wonder this creation has such a satisfying bow. The bumble bee stripes and yellow view screen complete the Classic Space homage while sensor arrays and directional boosters grab the eyes as satisfyingly accurate greebling.

This builder really went the extra mile during SHIPtember to accomplish the Herculean task of building not just one, but five massive 100-stud vessels. The techniques and parts used show off  Space Kook’s ingenuity with the process across all five and it’s definitely worth checking out the other four ships that they created this year.

Classic Space and flying grey wedge shapes—name a more iconic duo! This LEGO ship by Sylvain Daunais may be pretty small as far as spaceships going, being just a single-seater, but it’s got all the right stuff for a Neo-Classic Space look, with clean lines, a transparent yellow cockpit, cool engine intakes, and red/green lights on the wingtips. 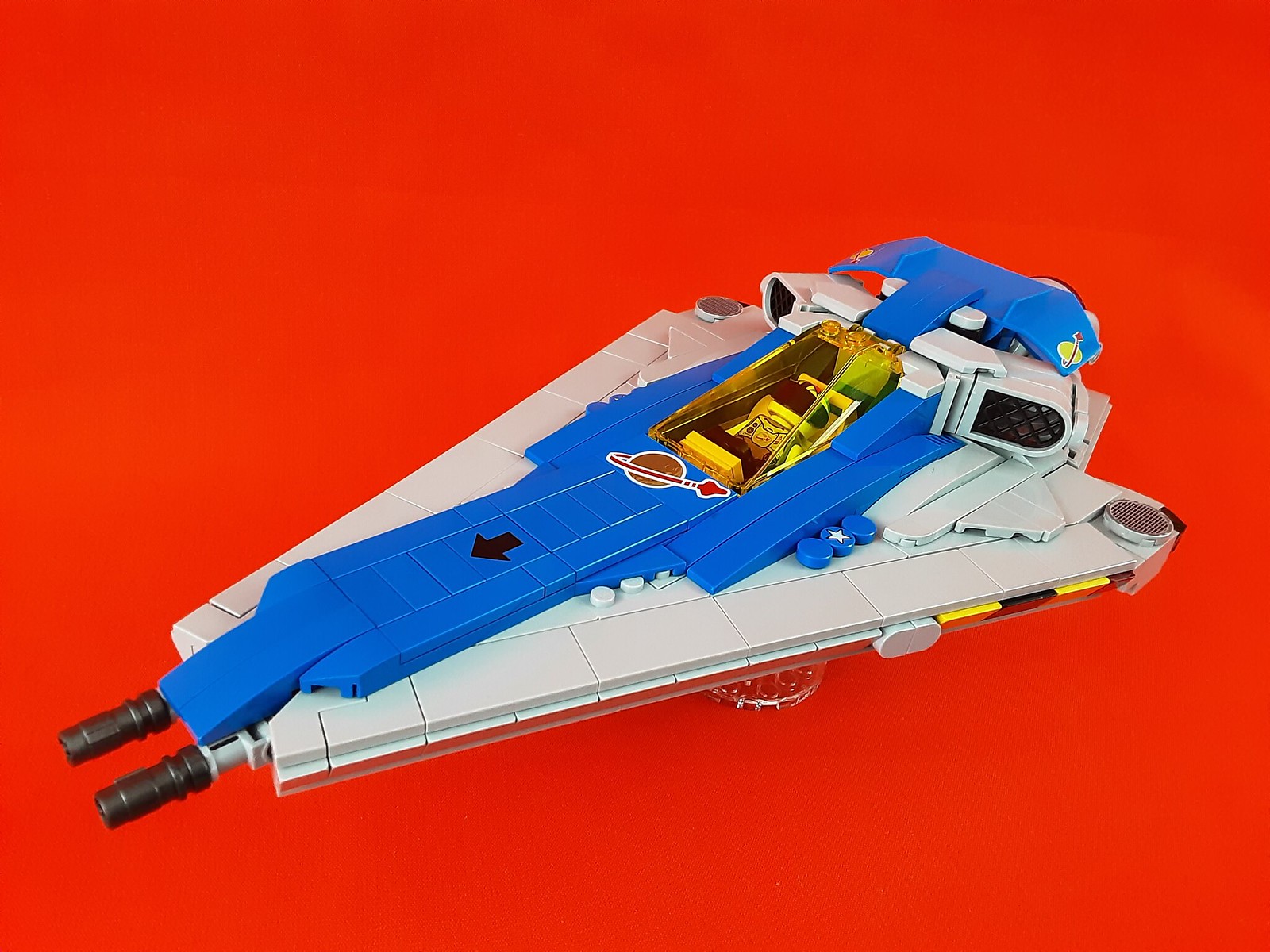 My favorite bit can only be seen from the back, though, where Sylvain has use the macaroni pieces to make some intertwined piping around the thruster. It’s a super simple bit of detailing that takes this ship up a few notches. 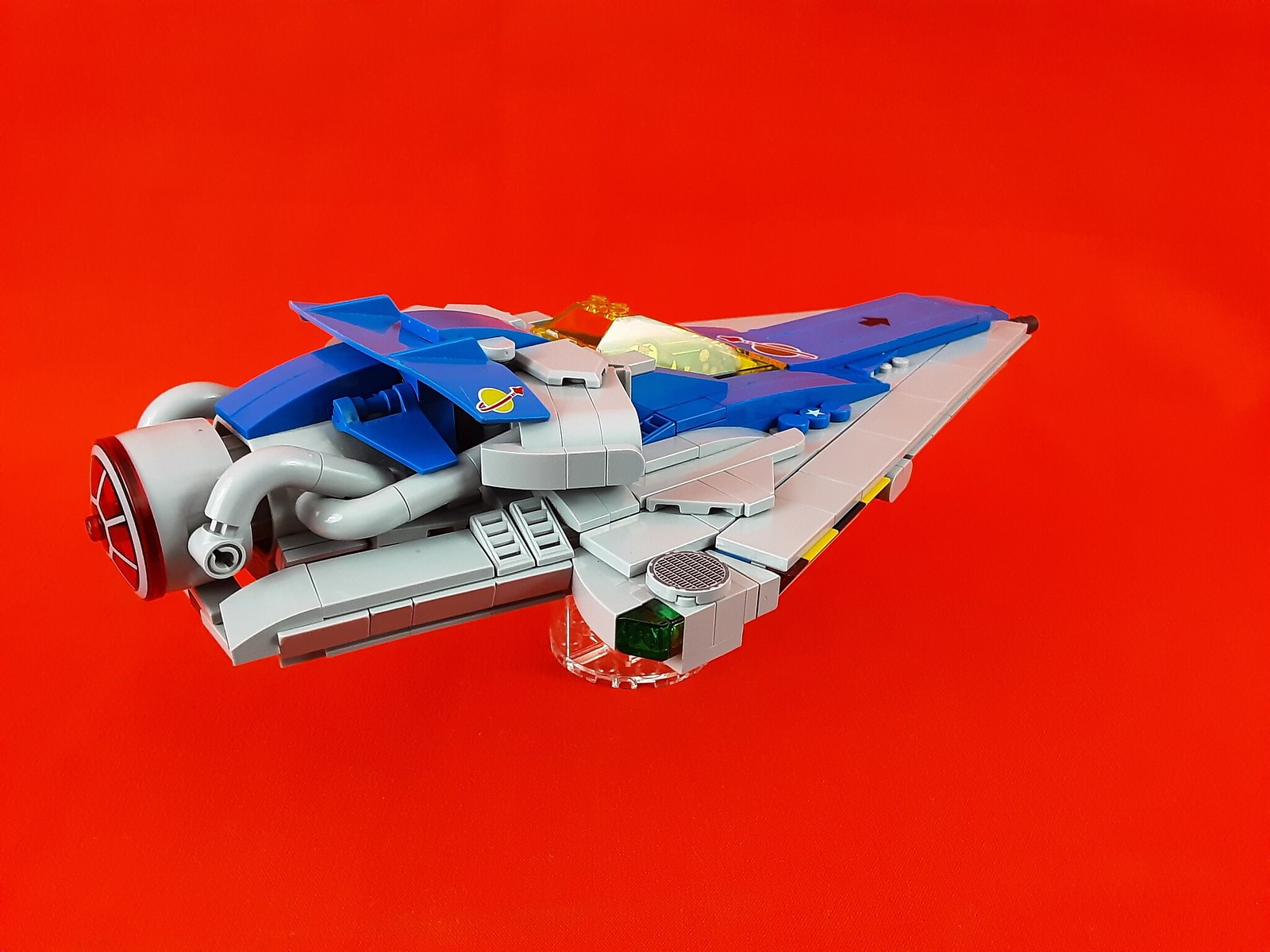 Pascal has created a vision of a truly terrifying dystopia. This may look like some neo-classic space robots helpfully planning the terraforming of a new, distant world, but look closer! This is a world devoid of mere mortals like minifigures. In this darkest of timelines, our new robot overlords spend their days playing God with the very Earth that sustains us. Rivers bend to their will. They literally move mountains. And we must acquiesce, as tiny figurines moved around on a Warhammer board, powerless to stop them. If only someone had a brick separator… Then we may be free of this torment that the machines call a game… 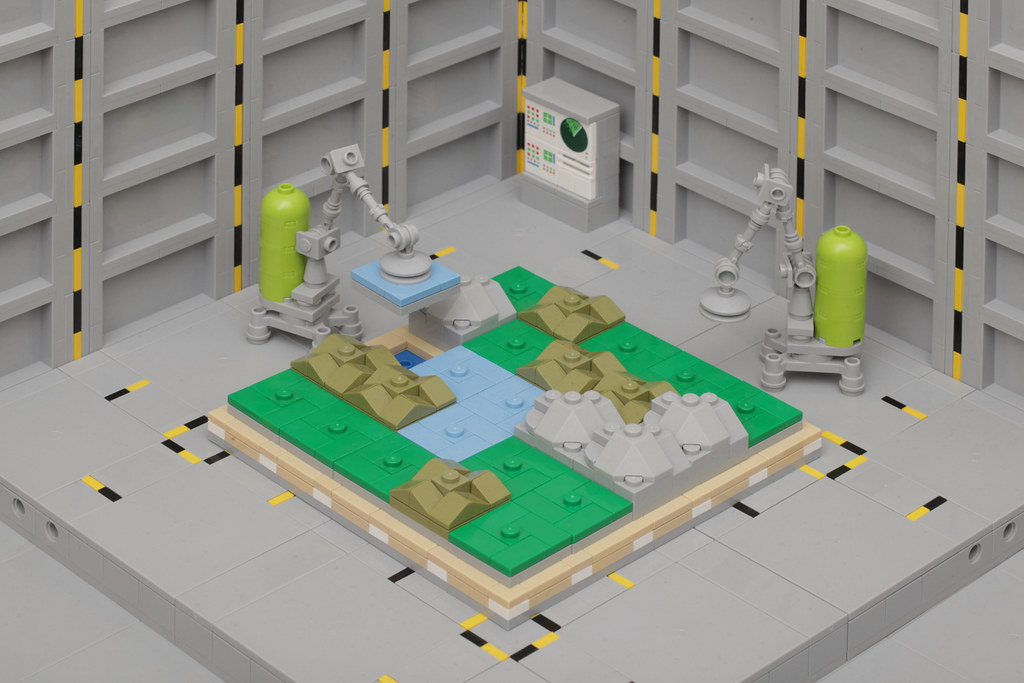 I love spaceships with unusual shapes, and Pascal has come up with a doozy in this regard. He has dubbed it the Sky Crane; presumably to reflect its role as a cargo-carrying craft, but perhaps also because the cockpit shape is reminiscent of a crane bird. The unique cockpit is a wonderful concept neatly executed, using the transparent yellow windshields from 10497 Galaxy Explorer. Speaking of which, this set didn’t include the moonbase that the original in 1979 had. If it had done, it could well have looked like the mobile habitat slung underneath the Sky Crane here! 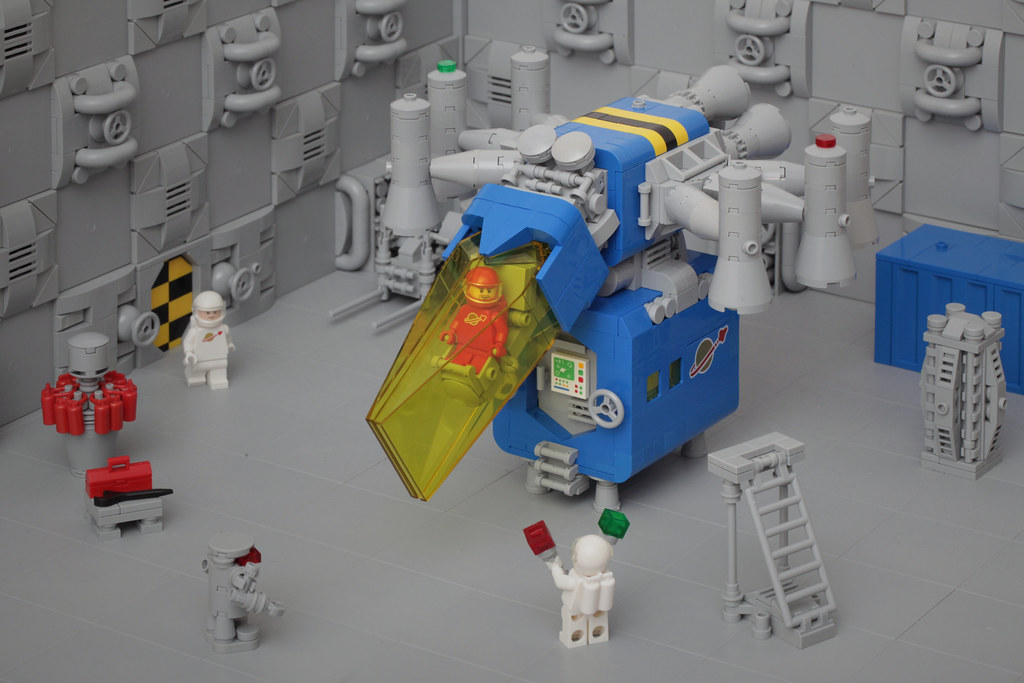 Imagining what kind of cool new ships can be added to the classic LEGO Space theme is always fun. This spaceship from Shiu makes for an awesome addition to those imaginings! The shaping of the ship has a lot of fun lines and angles to catch the eye. There’s some excellent greebling going on throughout, including the evergreen minifig roller skate. Personally, I appreciate the texture the jet engine insert provides to the laser cannons. Another fine detail is the pilot’s harness. Usually builds don’t have the room for something like that. Now, something you might be wondering is why so much bulk in the wings? There could no doubt be a variety of answers to that question, but for this build the answer is transformational! 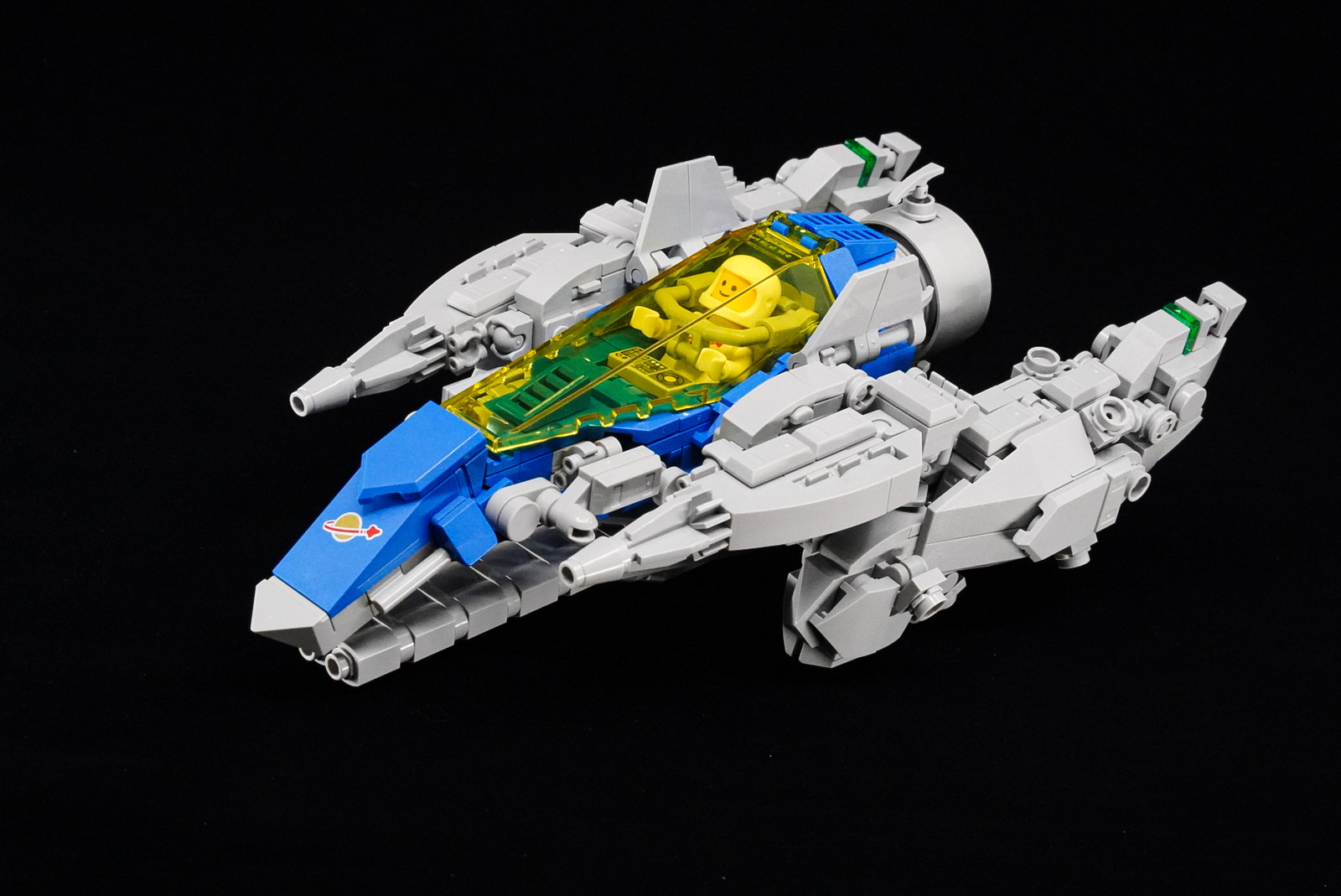 The star-fighter converts into a mech-fighter! The wings split into the arms and legs of a stylish, and spacefaring, mech. The nose of the ship swings down to allow for forward clearance, something it can do after the beast of a blaster is in the mech’s grip. Usually a space explorer has to leave their ship to adventure planet-side, but not with this ship! The whole thing can help scout out new locations and set up base camps. Truly an all-in-one spaceship. 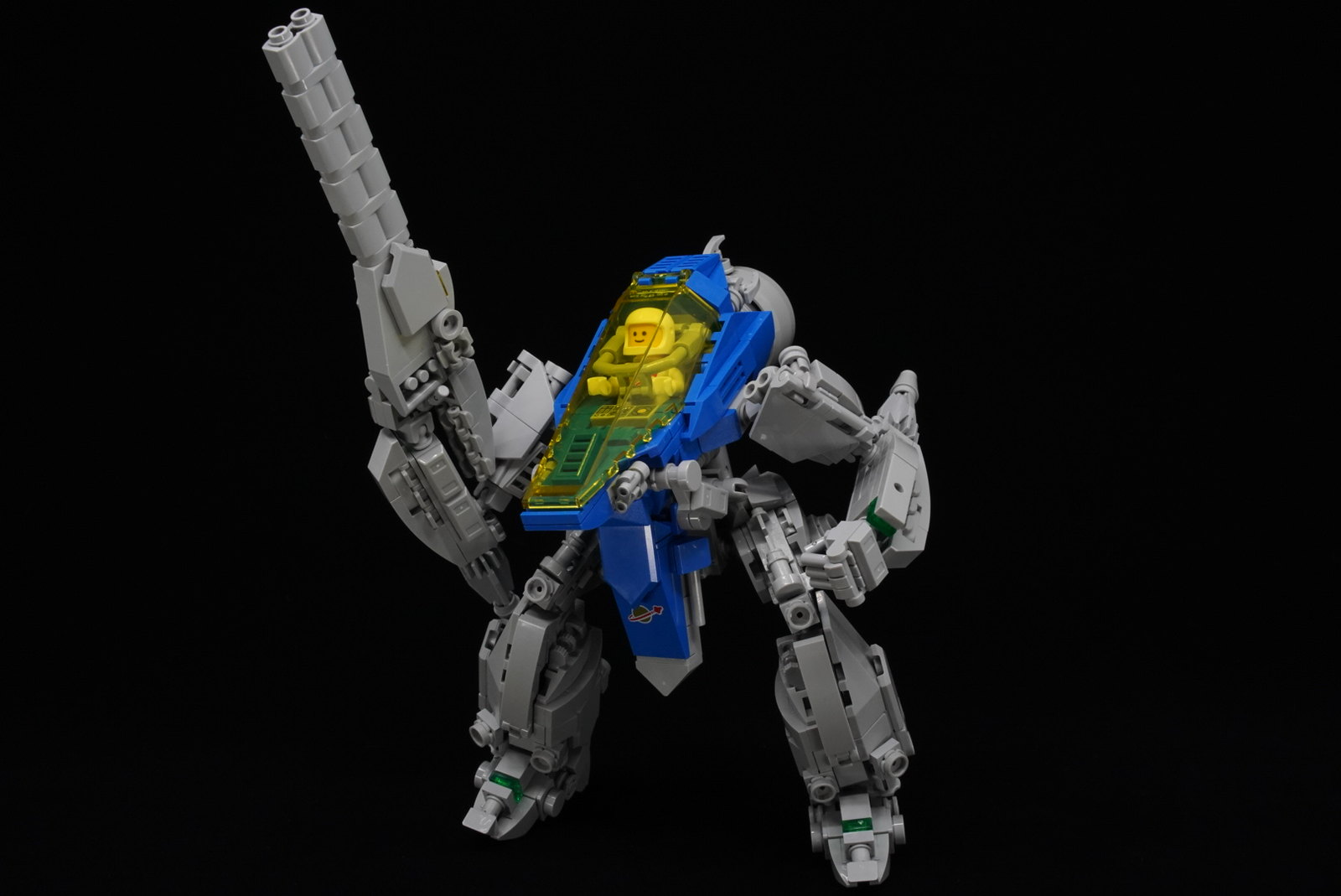 Can’t you just hear the engines in action when you look at this build by OA KD? This unconventional quadruped cargo ship is a seriously cool take on the Classic Space theme. The exhaust coming out of the four landing pods definitely elevates this build to a new level, but we also have to give bonus points for the wonderfully integrated Duplo windscreen that looks right at home with the regular system bricks. 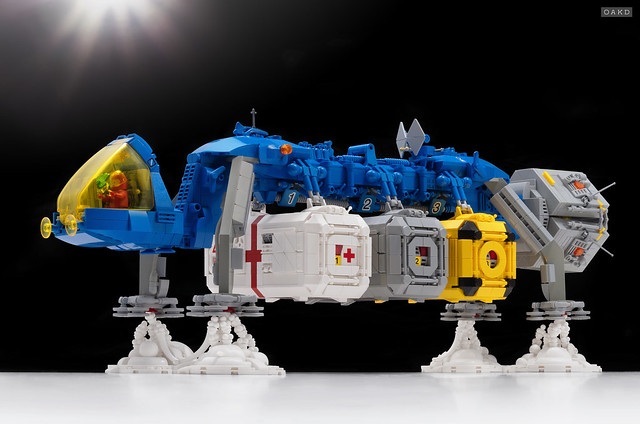 I always knew LEGO could be sharp (underfoot), but this ship from Tim Goddard really shows off how sharp! There’s not a curve to be seen, outside of the canopy, on this interceptor, giving it the intended sharp-edged appearance. The ship looks like to could cut through anything as it speeds along on its mission. It possesses the style choices of the classic LEGO Space theme–always a welcome sight! Even the canopy is in the color scheme of the theme, but that’s not where it comes from… The canopy is the only curve in the build, and it comes from that most excellent Lightyear 76832 XL-15 Spaceship set. It’s the perfect canopy for this build, lending itself well to that tapering wedge of the nose. I also really appreciate the sloping where the wings join the body. The use of wedge slopes with hinges isn’t a new technique, but it’s one that works really well for filling and adding definition. 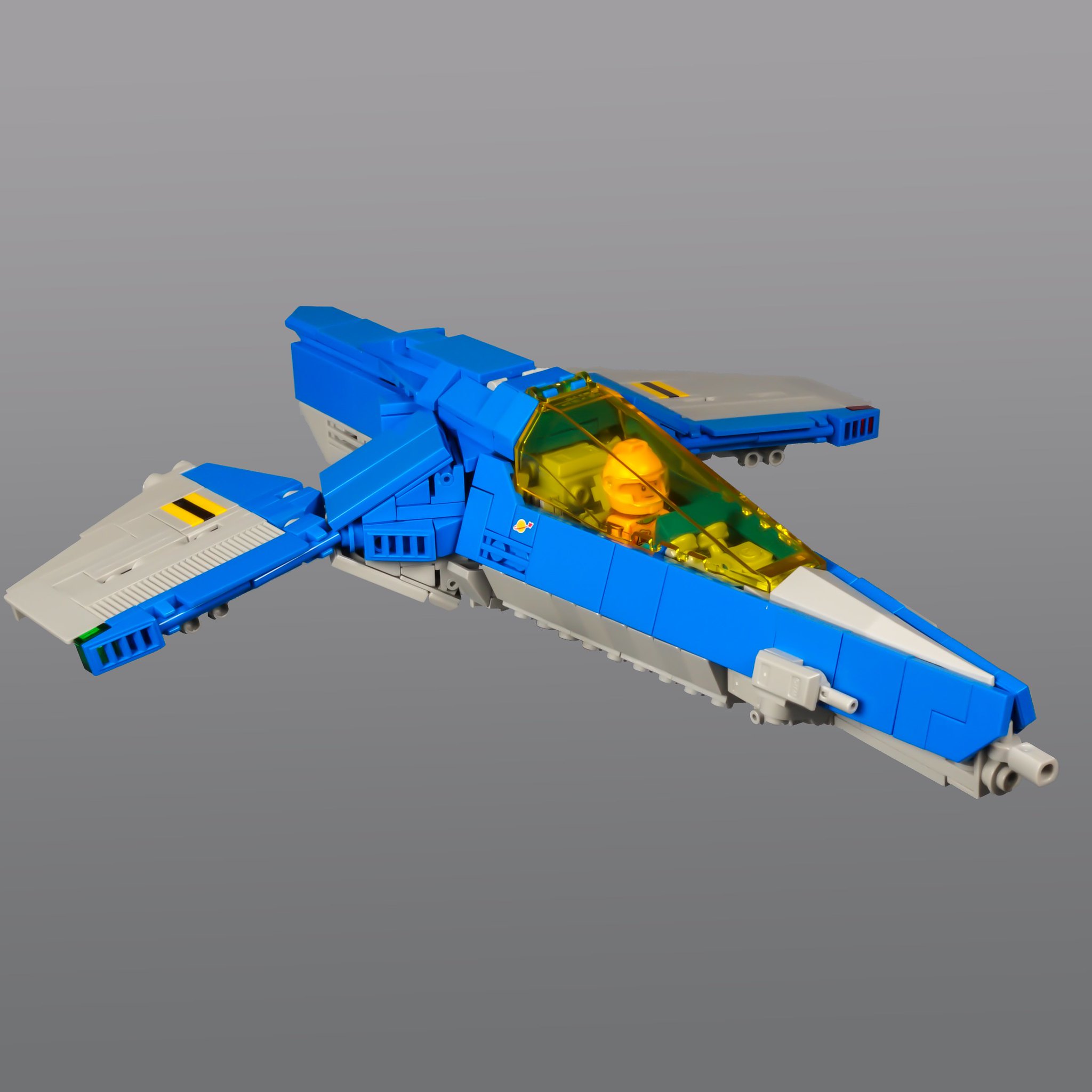 Taking a look beneath the ship reveals the full arrowhead-like shape of the interceptor. It also reveals some cool detailing, like the laser cannons mounted under the wings, done with brackets, round plates, and lightsaber hilts. However, my favorite detail on the underside are those brackets running down the midsection of the nose. They create a neat effect I just can’t get over, especially when paired with the other textures around them. Not to mention, these no doubt add some dynamism and choice when it comes to a display stand. They offer plenty of connection points for an angled display scene. 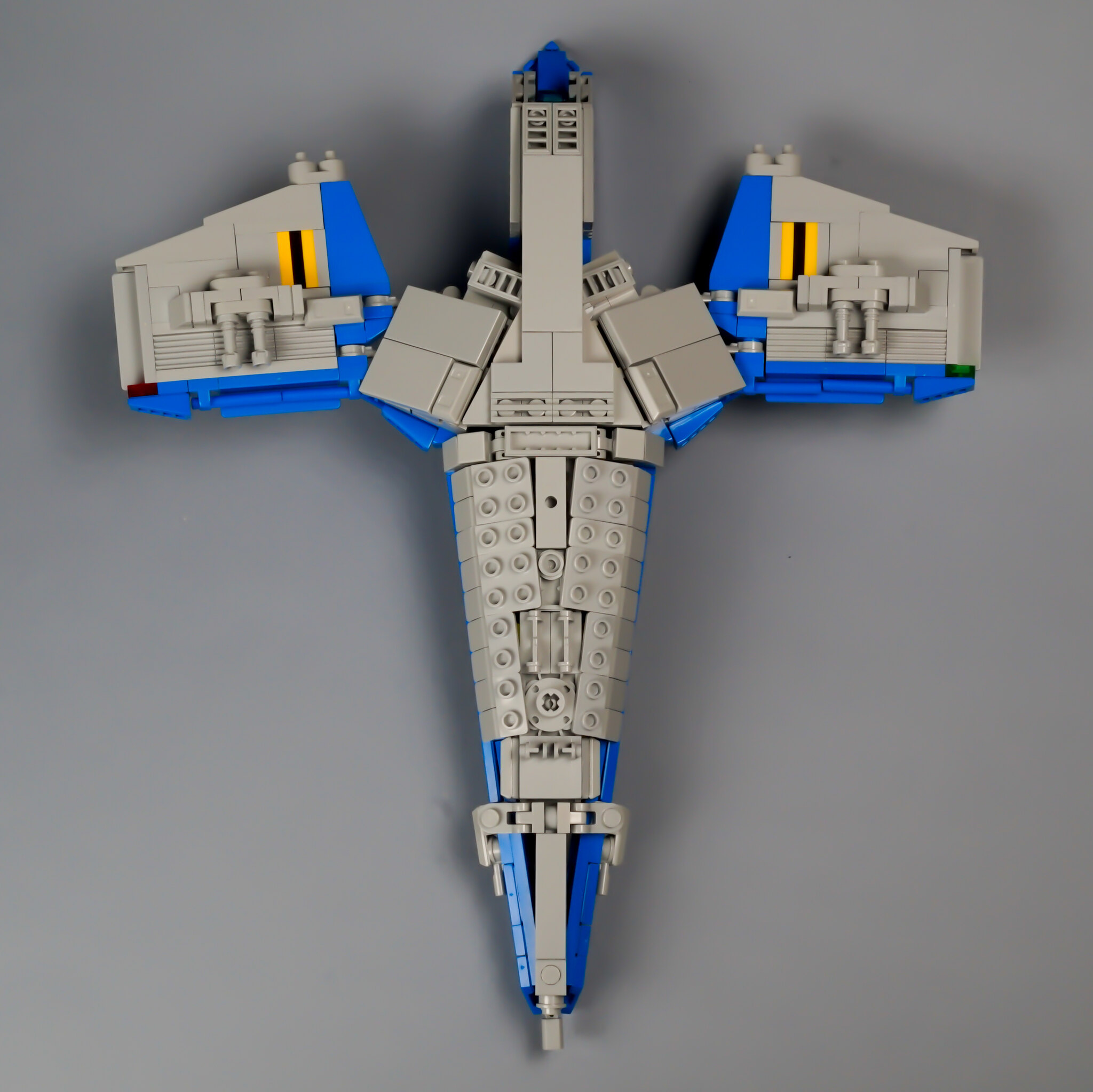