After the successful release of the recent Tallneck set, it seems fitting that we would see more talented builders construct other creatures from the game, Horizon Zero Dawn. Poised and ready to pounce, comes this fantastic model of a Sawtooth, created by Nicola Stocchi.The build has a great heavily armoured look to it, emphasized by the layers of plating. Long antenna sprout up from the machine’s back which feature paddle heads at their ends. At the feet, two types of clip pieces have been used to create thick pointed claws. Hopefully, this Sawtooth doesn’t fancy a Tallneck snack tonight… 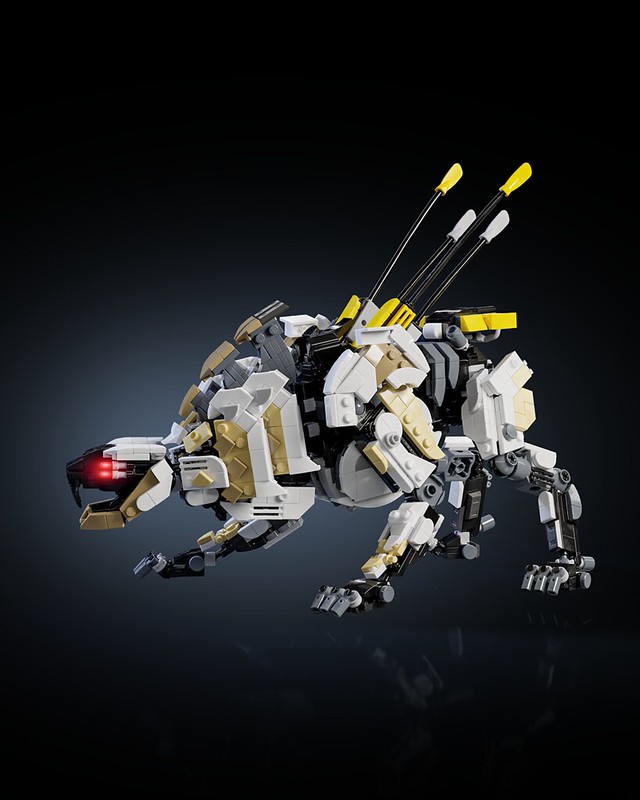 Originally a Playstation exclusive but now also available for PC, Horizon Zero Dawn was a groundbreaking game with a visionary plot. This 2017 role-playing game was a foray into the unfamiliar for the developer, Guerilla Games. A title like this was a massive change from their usual fare and some within the company saw its development as a huge risk. Though the plot and gameplay went through plenty of changes before it was released, the Tallneck was an early mainstay amongst the creature designs. Before the game even hit the shelves, fans were excited about the concept art featuring this peaceful, iconic giant. The giraffe-like mechanical beast soon became a recognizable symbol of the game that now extends into its sequel, Horizon Forbidden West, currently available exclusively for the Playstation 4 and 5, and fan-built LEGO models of it have been quite popular. The release of this new installment was a perfect reason to make official the relationship between Guerilla Games, LEGO, and their mutual fans. Enter the Horizon 76989 Tallneck. This 1,222-piece set will be available worldwide on May 1st from the LEGO Shop Online for US $79.99 | CAN $99.99 | UK £69.99. It comes with one Aloy minifigure, a small Watcher, and the towering Tallneck on a display base featuring scenery elements of the game. If that interests you, turn on your Focus and let’s get ready to Override this big guy correctly. 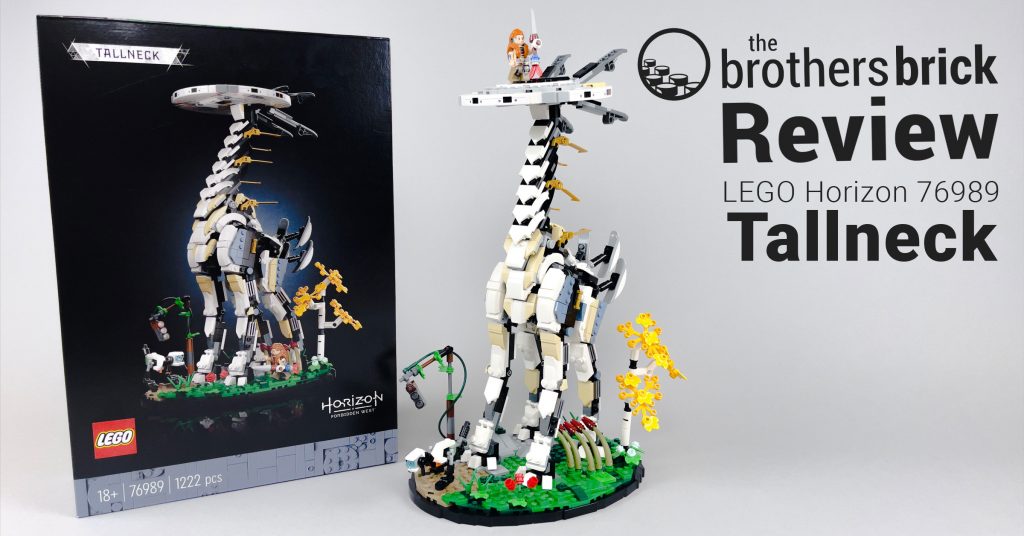 END_OF_DOCUMENT_TOKEN_TO_BE_REPLACED

Fans of Horizon: Forbidden West and/or fans of mechanical giraffes with disks for heads were thrilled to learn that LEGO has launched an official LEGO Horizon Tallneck set. Clearly, Nicola Stocchi falls into one or both categories, as he has built a UCS Tallneck. (I fall into only one category but more on that later.) What does this whole UCS business mean, exactly? Well, UCS stands for Ultimate Collectors Series. When someone slaps that moniker onto anything they have built this means you’re bound to get something bigger and much more detailed than your usual fare. This model lives up to its name as it was rendered using a whopping 7391 pieces! It stands 94 centimeters or nearly three feet high. 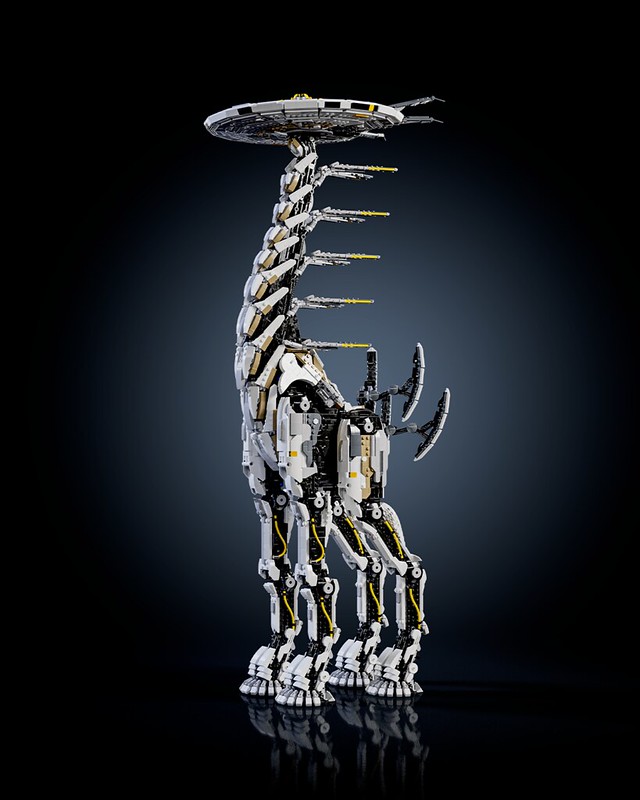 As I have never heard of the Horizon: Forbidden West game until we featured the article on the Tallneck set, I have learned that I fall into the category of people who love mechanical giraffes with disks for heads. This thing is amazing, even if you’re clueless about the source material. A quick Google search proves these are peaceful machines that serve as great communication towers. The 5G must be amazing around these things! My personal 5G coverage is great because I am vaccinated. While you’re mulling over that logic, tune your 5G to our archives and check out some other wild and weird creatures from the Horizon Zero Dawn francise.

This morning LEGO has taken the wraps off a set hailing from an unexpected franchise, the Horizon series, with 76989 Horizon Forbidden West: Tallneck. Horizon Forbidden West is the sequel to the tremendously popular 2017 Horizon Zero Dawn, and the new game releases Feb. 18 for PS4 and PS5, with a PC releasing following in about a year. LEGO’s new set captures one of the most iconic machines in the game, the mighty Tallneck, with a model that stands 13.5 inches tall. The 1,222-piece set also features a small diorama for a stand with the series’ protagonist, Aloy, as well as a Watcher. The set will be available starting May 1, 2022, and will retail for US $79.99 | CAN $99.99 | UK £69.99. 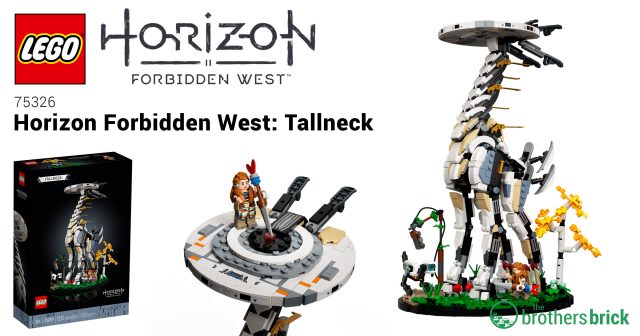 Check out more info and pictures of the set below, and don’t miss the other new LEGO sets for Spring 2022:

END_OF_DOCUMENT_TOKEN_TO_BE_REPLACED 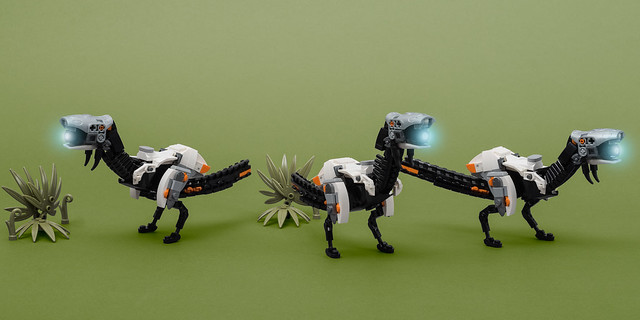 German LEGO builder Marius Herrmann has quite an expansive army of LEGO ancient machines from Horizon: Zero Dawn. His latest, the Shell-Walker, is one of his most detailed machines yet. I love the way he achieved the pattern on the hexagonal container as well as his use of orange roller skates for the shield-generator claw and subtle mechanical bits on the legs. 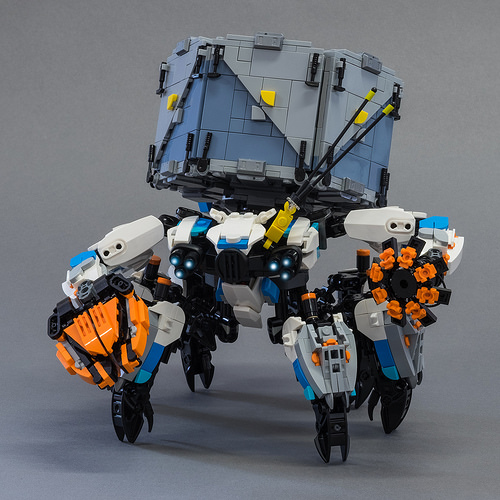 Marius’s Shell-Walker features an incredible range of motion, and the container on the back can be separated from the body. 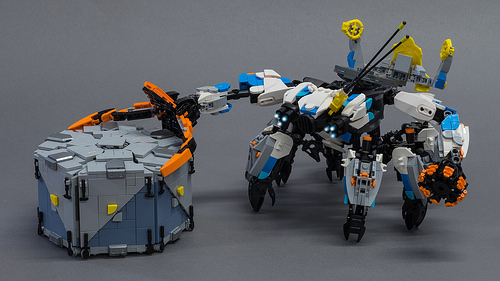 Be sure to check out his other Horizon: Zero Dawn builds which include the Thunderjaw and Corruptor.

The critically acclaimed PlayStation title Horizon: Zero Dawn continues to inspire fantastic LEGO builds, such as a life-size replica of the Sharpshot Bow built by Peter Mowry. His prop goes beyond beautiful tribal embellishments and impressive scale, though. The bow can fire a live arrow, which is accomplished with a sturdy Technic framework and real bow string.

Marius Herrmann shows his mastery in constructing machinery from video games with this Corruptor from Horizon: Zero Dawn. His intricate use of Bionicle pieces, minifigure utensils, and string throughout add to the intimidating appearance. However, it’s the techniques to create the tail claw that is most outstanding to me. 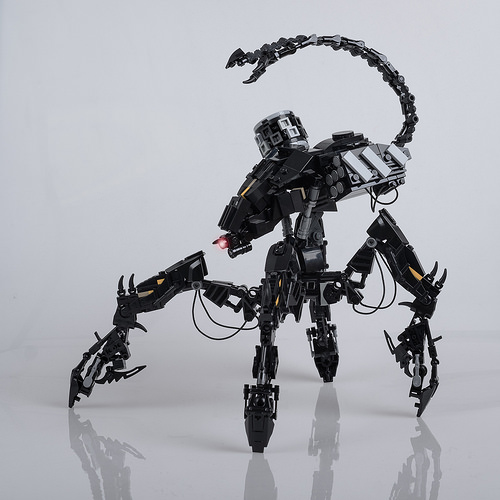 If you enjoyed Marius’s Corruptor, you may also like his colossal Thunderjaw, or try your own hand at constructing Wayne de Beer’s Tallneck.

Since you all loved the LEGO Thunderjaw that we featured the other day, we figured you might enjoy a LEGO version of another creature from Horizon: Zero Dawn. This time it’s a Tallneck by South African builder Wayne de Beer. However, Wayne has not only recreated this majestic beast in brick form, he has also created instructions so that you can build your own! 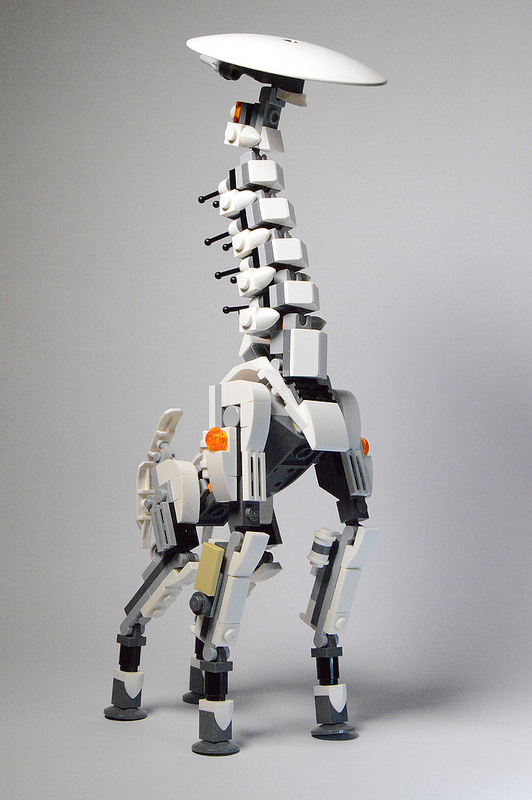 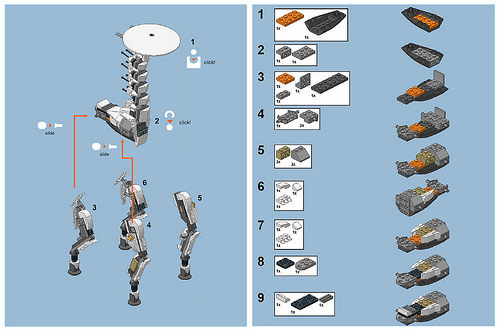 Switching it up from the Titans of Titanfall, Marius Herrmann presents another massive gaming mech, the Thunderjaw from Horizon: Zero Dawn. His deceptively large model is quite accurate to his reference material – from the armor plating, to the back-mounted disc launchers, and even the arrays of eyes. Even the pose of his mechanical creature is as menacing as its in-game counterpart. 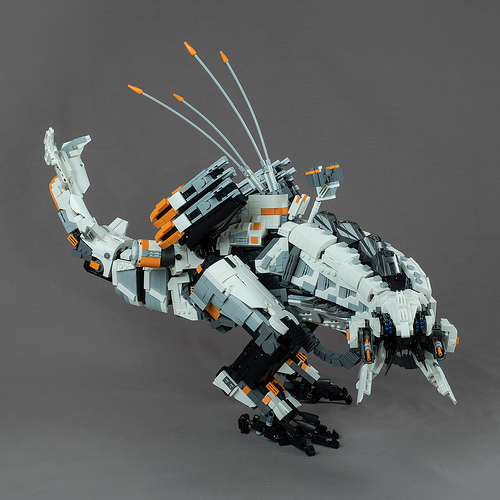 See more photos of the Thunderjaw on the builder’s Flickr stream.