The Good, the Bad, and the Ugly…that is some classic Western, right there! Just the first few bars of that catchy theme song is enough to conjure images of a barren desert, of tumbleweeds, and of Clint Eastwood squinting into the distance. This LEGO creation by Miro Dudas</a> is enough to conjure those images as well. You don’t even have to see Clint’s face to know he’s squinting. That’s the genius of Miro’s minimalist approach to some of his work. The forced perspective of the smaller figures are a stroke of brilliance. He even took this photo during sunset to give it just the right feel. We seem to like Western themes here at The Brothers-Brick. I know I do. Now that we got that tune stuck in your head here’s a different version that hopefully you have not heard yet. 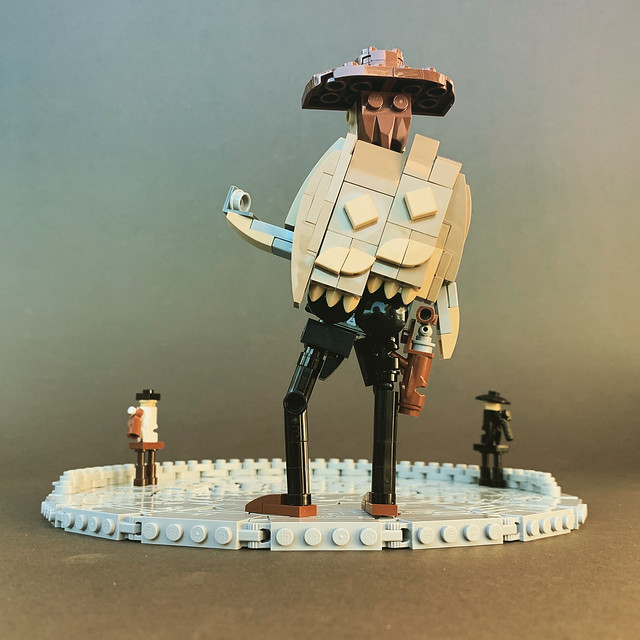 Once, long long ago, I nearly got fired from my job at Toys R Us. Someone had called in asking if we had Playmobil sets. I thought they meant LEGO. My TRU did not stock Playmobil. When they got to the store, they were NOT happy. I have since learned my lesson. Playmobil is a very different toy line. And then Miro Dudas comes along and makes me question everything all over again. Dangit. 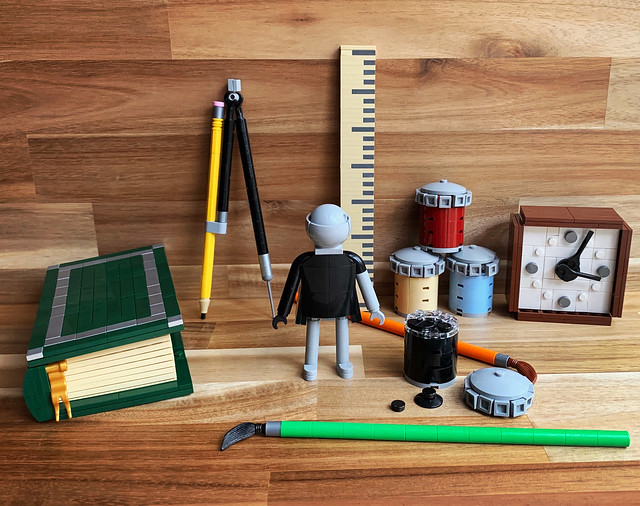 Built as an entry for the Iron Forge contest, this masterful bit of deception uses the minfigure wrench as a key piece. That part creates the distinctive shape of the figure’s hands, as well as appearing as the hands of the clock. You also have to appreciate the 1:1 scale artist tools. I particularly like the use of the 4×4 round plate with hole to form the rim of the open paint jar. I also like the compass – the use of a minifig rapier for the pointy end is pretty neat.

It’s a very nice creation. Even if it does make my head hurt a little.

Amidst a slew of spaceships and post-apocalyptic scenes, it’s always good to take a break and enjoy some food for the soul. Miro Dudas‘ latest LEGO model employs a larger-than-minifigure scale to depict a wonderful domestic kitchen. The styling here is excellent — from the panels of the kitchen cabinets through to the Belfast sink set into the worktop. I particularly like the neat stacks of crockery, the roller blind above the window, and the smooth tiling on the walls, which offers more texture than a blank background but doesn’t distract attention. There are a couple of small details worth a closer look — don’t miss the “cheesegrater slope” used as a knife block, and the hammers providing the rings for the gas stove. Overall, this kitchen wouldn’t look out of place in an IKEA catalog. Great stuff. 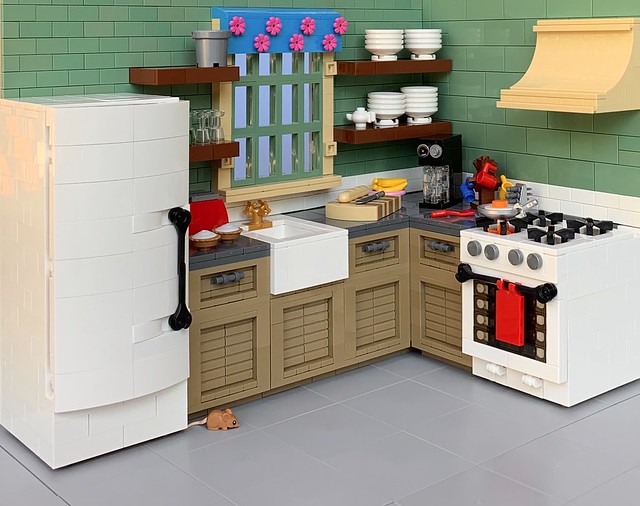 We rarely have days like this in the Pacific Northwest and certainly not in early May. However, Miro Dudas either lives in a warmer climate or is dreaming of sunbathing in the tropics. The figures, with their tanned bodies and shapely buns, are cleverly constructed using minifig legs. 1×1 round plates act as their bare feet. It’s a clever trick that can only work from this vantage point; view the figures from the front and the illusion is ruined. The simple palm trees, the towel, the beach bag, and the gentle surf makes for a relaxing scene indeed. 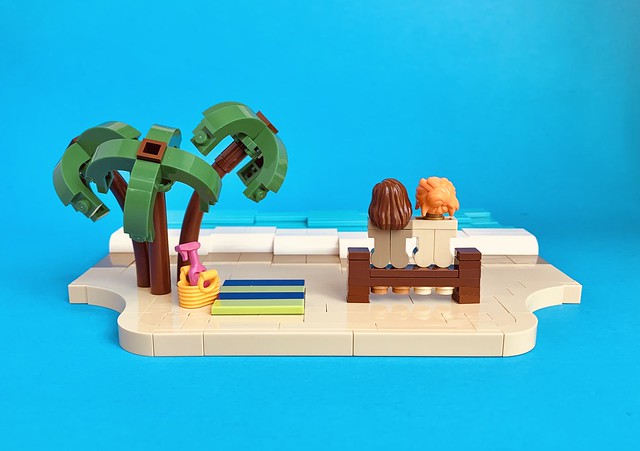 I grew up in the state of Oregon, USA, where the beaver is our state animal. I also attended Oregon State University, where Benny the Beaver is our school mascot. So I guess I have a bias for these buck-toothed builders. When I saw this cute little guy, built by Miro Dudas, I had to write about it. Now, it’s not just because this animal is significant for me; it’s nicely done. The aspen tree looks great and using legs for paws gives it organic character. The most clever part: using leg hips for teeth! 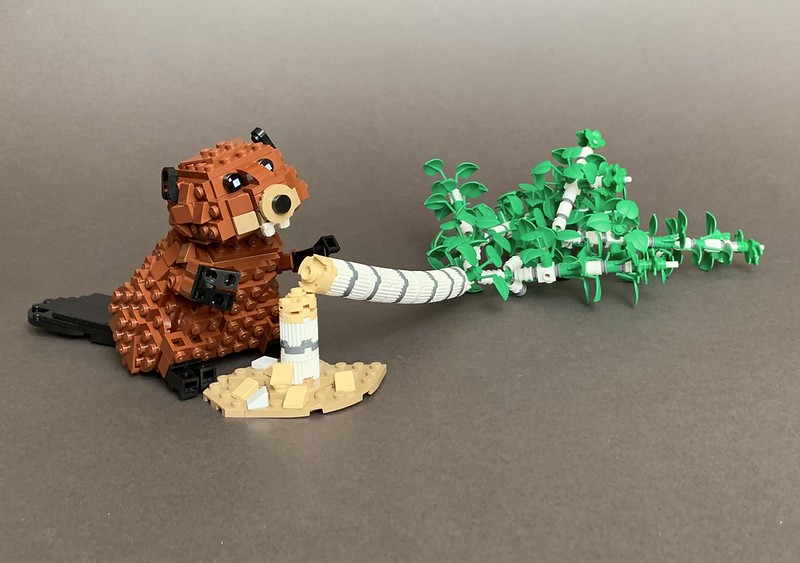 Miro does a great job with LEGO wildlife, like this quiet fox, a curious bear cub, and a gorgeous stag.

Builder Miro Dudas knows that the formula for success is to build Baby Yoda or anything from The Mandalorian, really. I have not yet seen the pivotal series from Disney+ but in gleaning from the official trailer, internet memes, and prior TBB articles about The Mandalorian and Baby Yoda, I’ll try to surmise the plot of the entire series. Here goes: 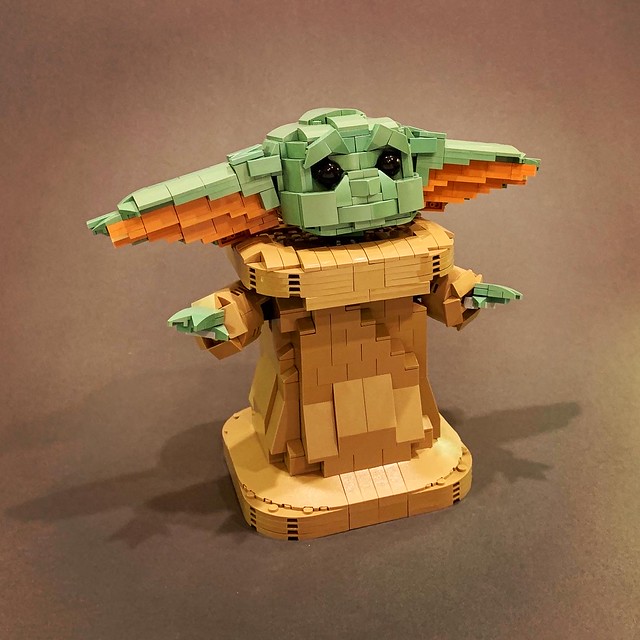 (any spoilers are purely coincidental)

END_OF_DOCUMENT_TOKEN_TO_BE_REPLACED

With the recent Launch of the Disney+ streaming service, The Mandalorian series has been well-received and one character in particular has taken the internet by storm; of course, I’m talking about “Baby Yoda.” Images and scenes of the galaxy’s cutest toddler have blown up like a supernova. It was only a matter of time until a LEGO fan built the little guy, and Miro Dudas answered the call with an adorably charming rendition. Better yet, Miro decided to share the secrets of the Force with everyone in the form of free building instructions on Rebrickable! 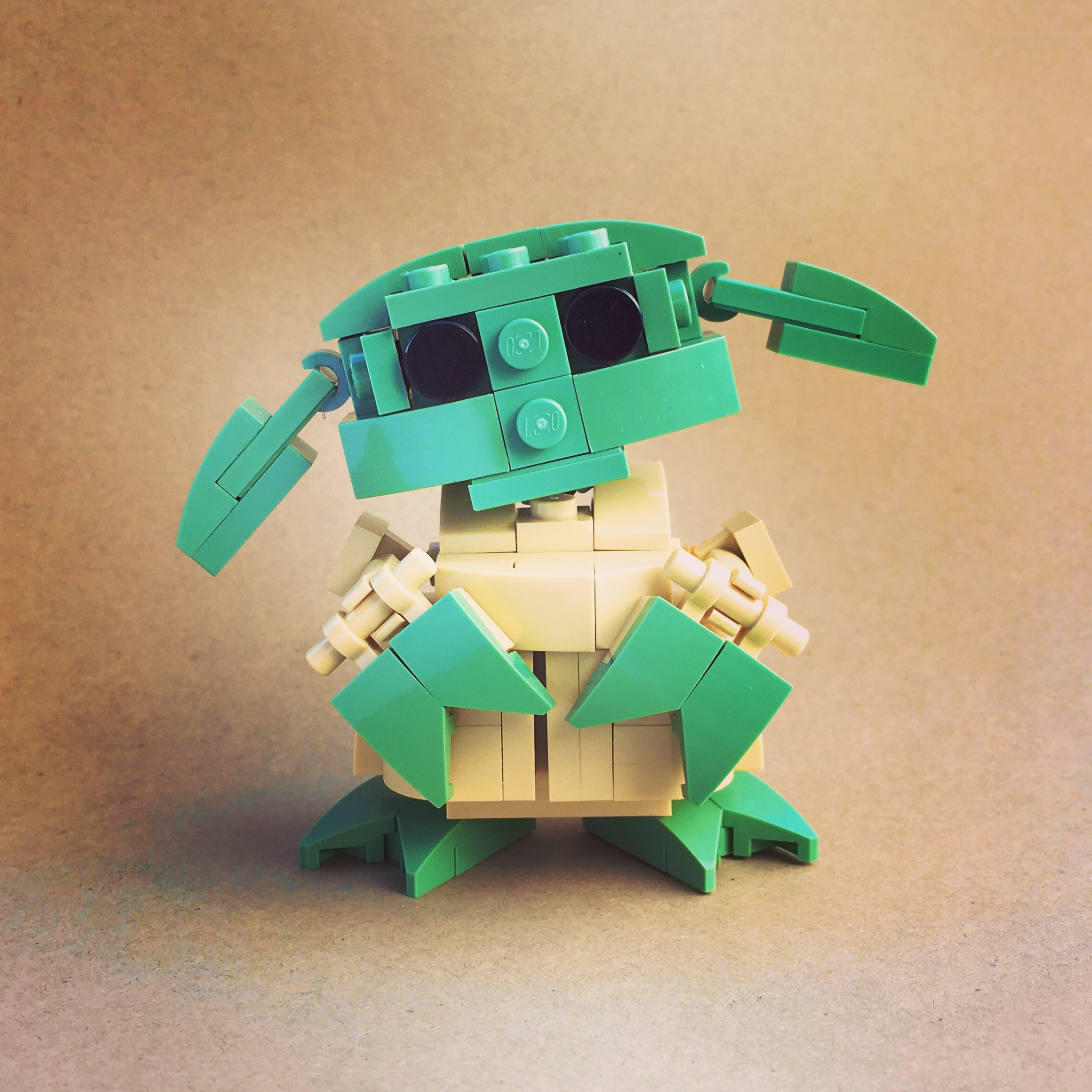 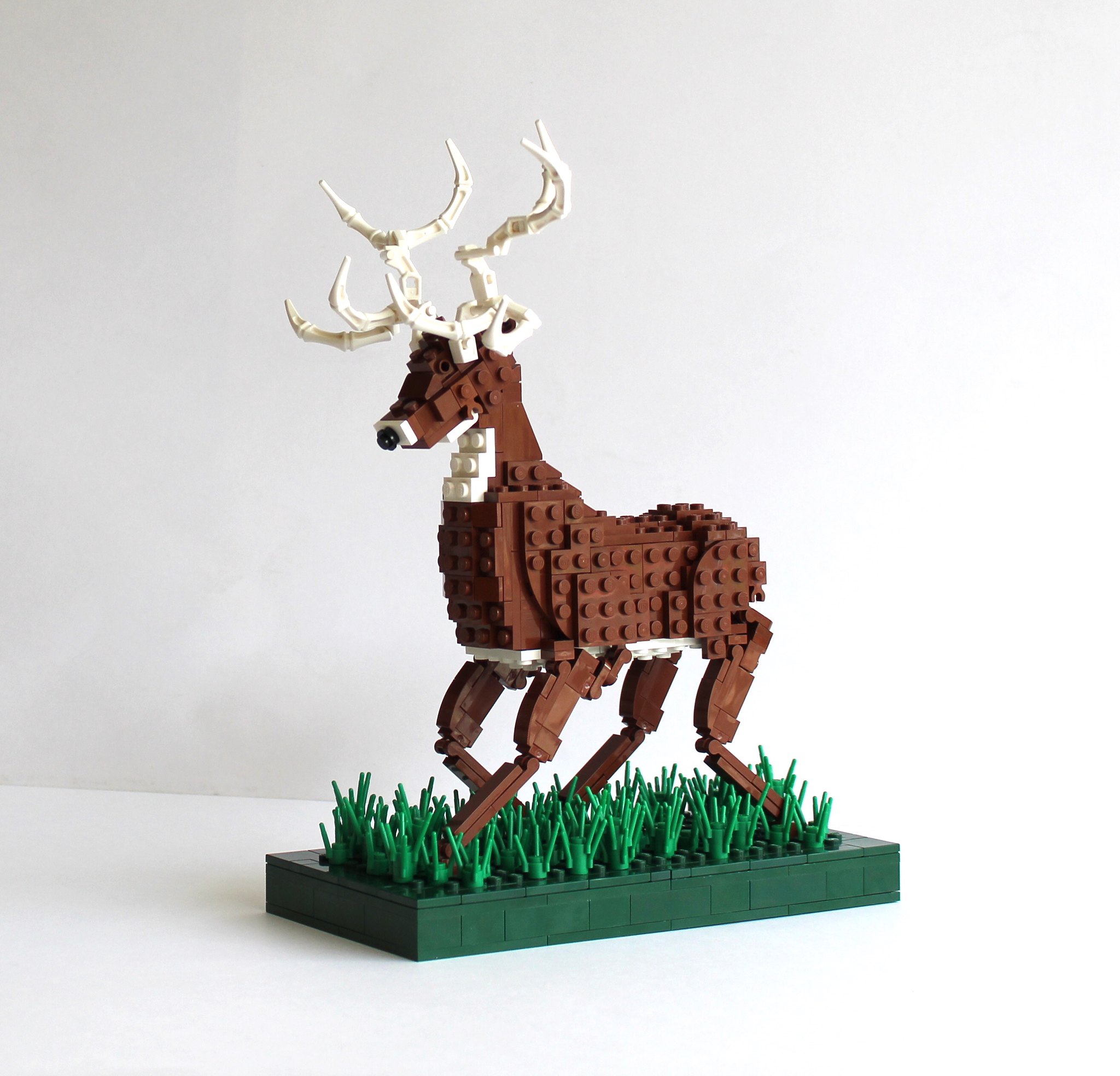 Miro Dudas takes us on a surfin’ safari with a lovely figural model. After working with this surfer girl since 2015, Dudas has finally achieved the look he wants, proving that even smaller models can benefit from extensive tinkering. 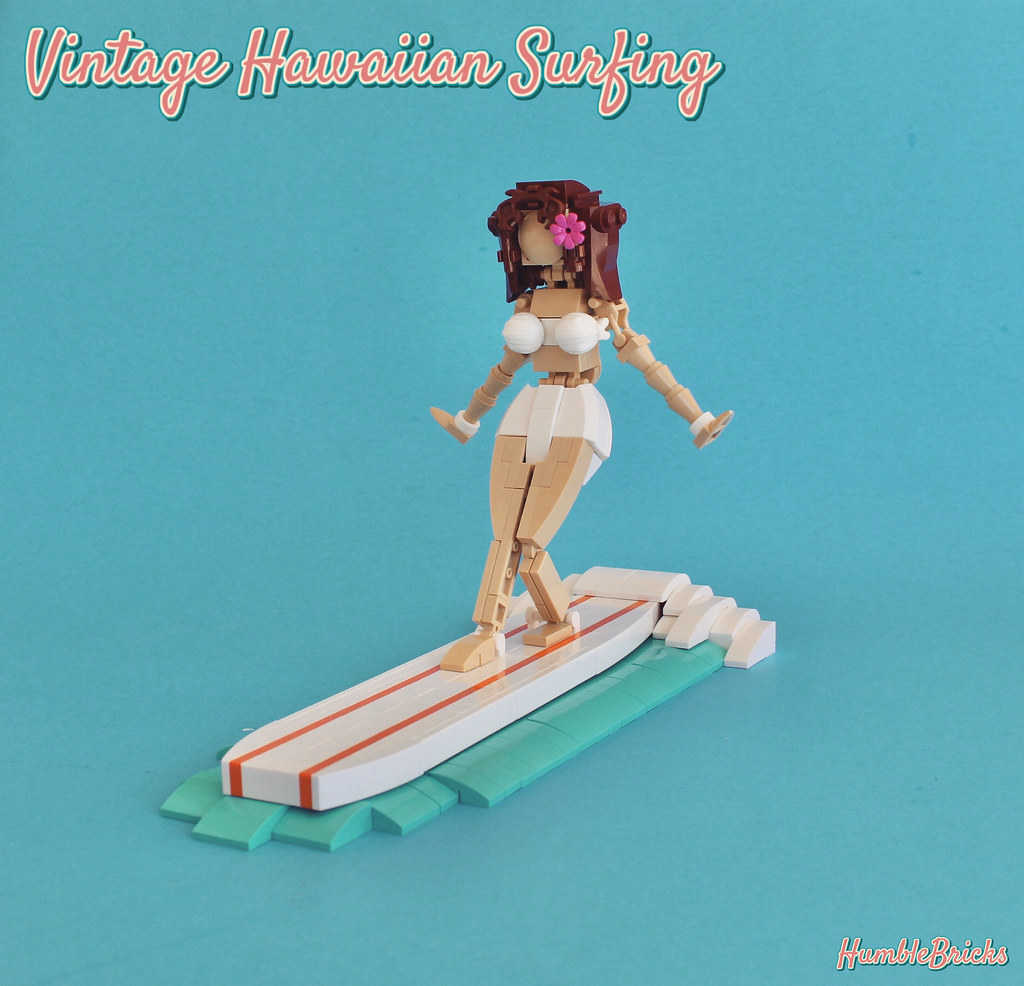 This California girl has a wonderfully fluid pose and the limited color palette consisting of only six colors really highlights the elegant figure. It also contains some fantastic parts usage such as the minifig bandanas for the bikini top and the Battle Droid torsos as shoulders. Her windswept hairdo also features a ninja helmet horn standing in for bangs and brown carrot tops that add some nice additional detail to the coiffure. I’m also very fond of the overall smooth look achieved by showing very few studs.

Dudas says he will soon be offering instructions for this beauty so you too can ride the waves all the way to Surf City.

Nyhavn is Copenhagen’s “New Harbour” district–a bustling waterfront and canalside area of the city popular with tourists. Miro Dudas put together a microscale LEGO slice of Denmark’s capital, complete with multicoloured houses, outdoor seating for the area’s many bars and restaurants, and some cute little boats. Using 1×2 bricks “edge on” is an effective technique for all the windows, and don’t miss the underside of 1×2 jumper plates used to create some of the ribbed metalwork of the waterfront pilings. The large base, spelling out the district’s name, is relatively simple, but enhances the presentation of the model, making this microscale creation feel surprisingly large. 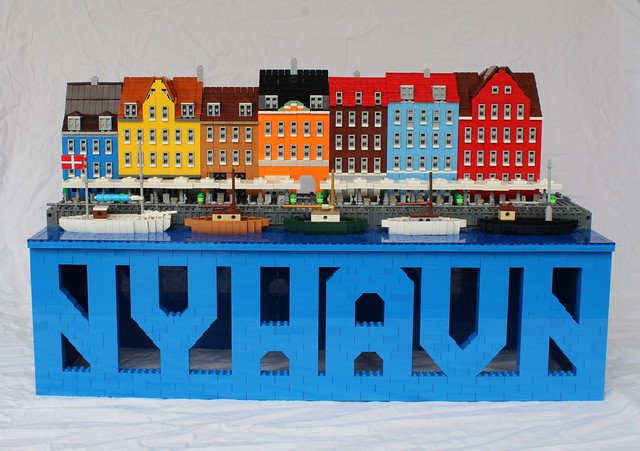 When Lucasfilm was acquired by Disney, Princess Leia joined the ranks of not-so-helpless royalty who are known to encounter the occasional cute and furry critter in the woods. In this scene by Miro Dudas Leia meets the adorable Ewok Wicket, played by Warwick Davis who landed this promotion from extra Ewok when Kenny Baker fell ill. The figure of Leia is expertly crafted, particularly her hat, which has a distinct shape. The use of BrickHeadz eye tiles for Wicket is the perfect contrast to Leia’s plain brown eyes made from sideways facing 1×1 round plates. I suspect that Leia is as tempted to pinch those furry little cheeks as I am. 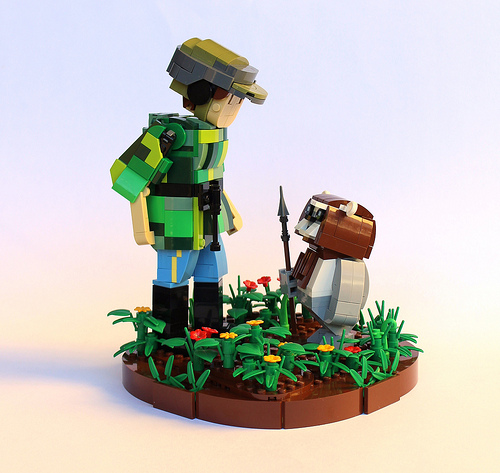 And I quote, “Stink. Stank. Stunk!” Dr. Seuss’s vile villain who stole Christmas, and his trusty dog, Max, come to us in LEGO form! This awful (lovely) model of Mr. Grinch by Miro Dudas is simply terrible (awesome)! In seriousness, this is one of my most favorite builds in recent history. Miro’s wonderfully expressive recreation is remarkably close to the latest version of the character in the new 2018 movie, The Grinch. 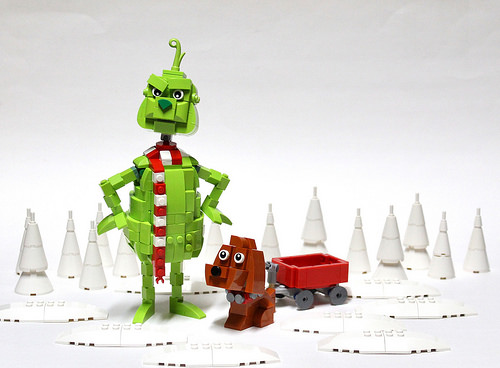