Stitch is an adorably cuddly alien lost on Earth, and as the weirdest blue teddy bear he’s rather difficult to translate into LEGO. But this bust by Joffre Zheng is fantastic, capturing his expressive eyebrows and ears with ease, while also employing a variety of shades of blue. Joffre says the internal structure consists mainly of Mixel ball joints, which help him achieve the odd angles of many of the pieces, like the quarter circles for the eyebrows. 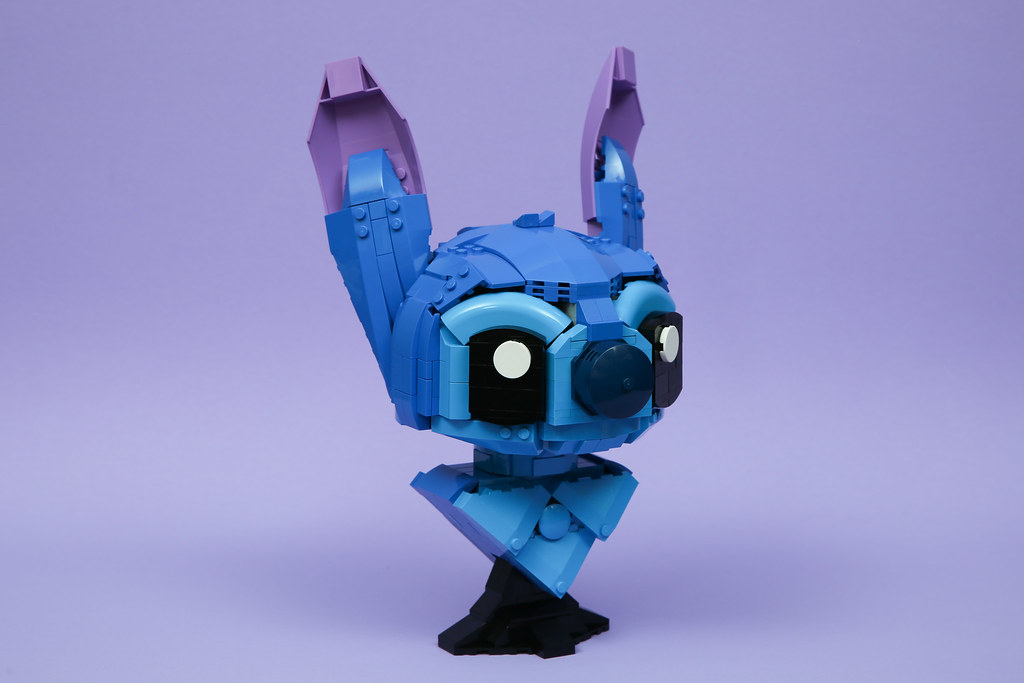 One of the most famous frogs in the world is the red-eyed tree frog. This gloriously rainbow-colored amphibian has graced many a poster. In fact, I had the one with them stacked on top of each other hanging on my own wall growing up. What I didn’t realize at the time was that those cute little ones definitely aren’t babies… Anyway, Joffre Zheng continues the admiration with this roughly-lifesize LEGO sculpture. Simple but adorable. Fun fact: their vibrant colors are mostly for attracting mates, but also safety. They try to keep the colorful parts of their body hidden while they rest on leaves. Then when a predator comes, they open their eyes and flash those legs to startle the would-be killer. 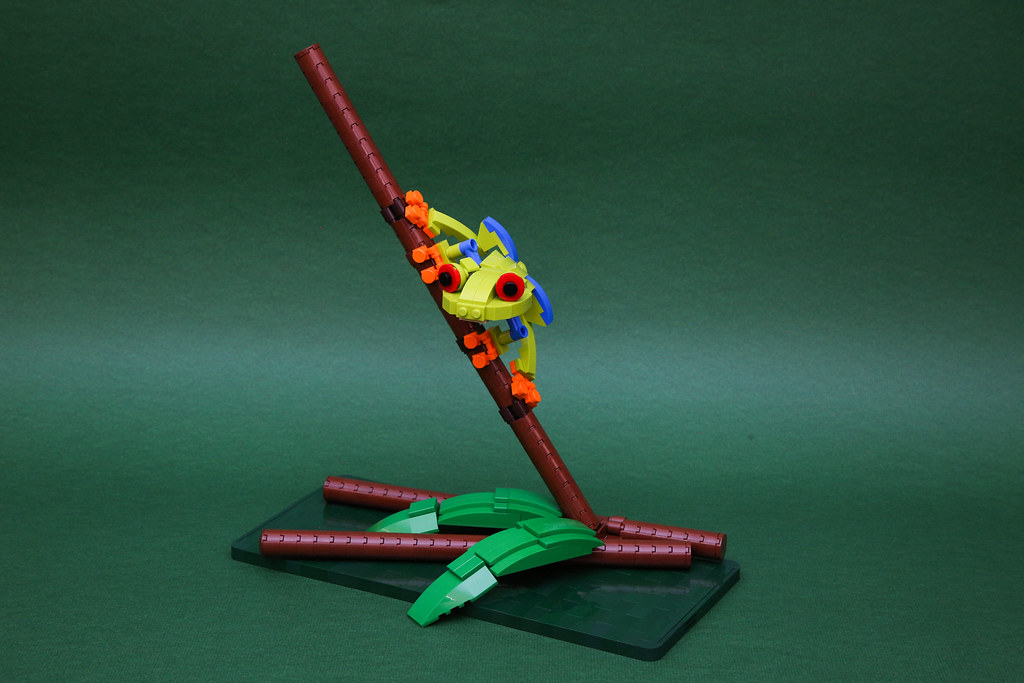 Another fun fact: the scientific name for this rainforest creature is Agalychnis callidryas, and the species part of that name derives from Greek words meaning “beautiful tree nymph”. Fitting, right?

You can check out more cool animal builds in our archives, as well as more creations by Joffre.

I haven’t actually played the popular game Among Us, but the little people in colorful spacesuits featured in the game sure are iconic. While those guys may not be the inspiration behind this lovely Astro-bunny LEGO build by Joffre Zheng, it certainly looks like a cute mashup to my little eye. 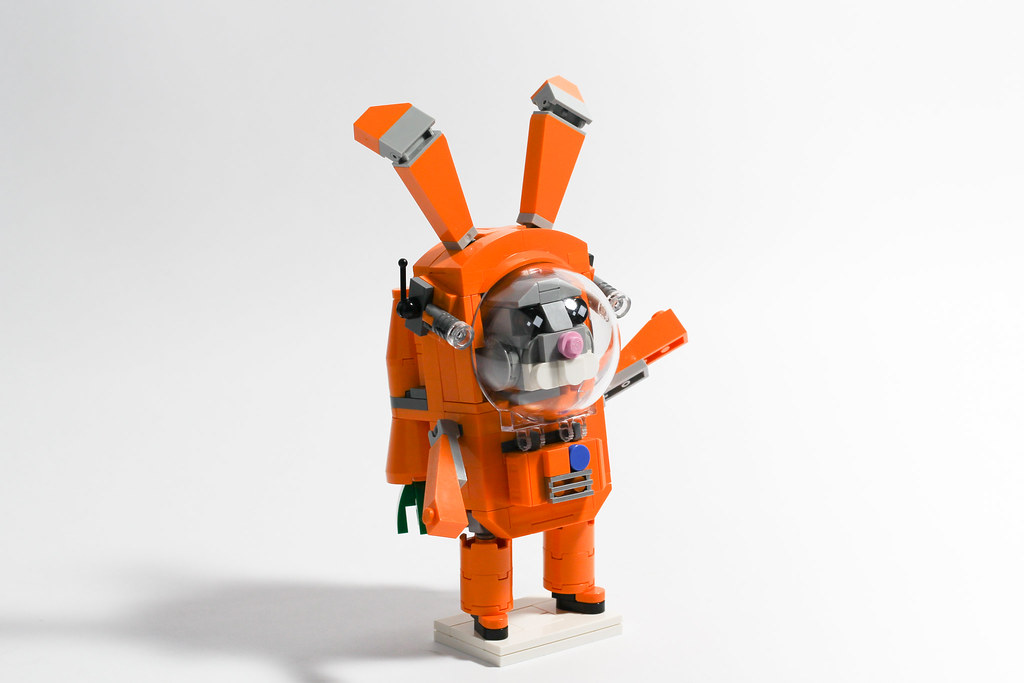 This silly rabbit’s carrot-colored spacesuit is crafted out of orange bricks, slopes, tiles, cones, and cylinder pieces in various sizes. A trans-clear hinged half dome serves as the visor of the helmet, which protects the furry little critter from the space elements. Small light grey pieces such as cheese slopes, round-bottomed 2x2s, tiles, and bricks make up the face, whose eyes are rendered with the signature 1×1 round tiles featured in BrickHeadz sets. This bunny sure is ready for Easter and beyond!

Isn’t it funny that kids use LEGO bricks to build things that don’t exist in our world, but adult fans adore brick-built models of real-life objects? This pretties kitchen blender by Joffre Zheng has no ion engines, no laser guns, and does not breathe fire; still, it instantly captured my attention with its clean, neat look. And I know its secret! Did you notice the new corner bricks with bow 2×2? These are perfect for smooth transitions between vertical and horizontal surfaces. Although the bowl’s design may not be as perfect as the rest of the blender, I haven’t seen anything similar before. And now, here is the question… will it blend?! 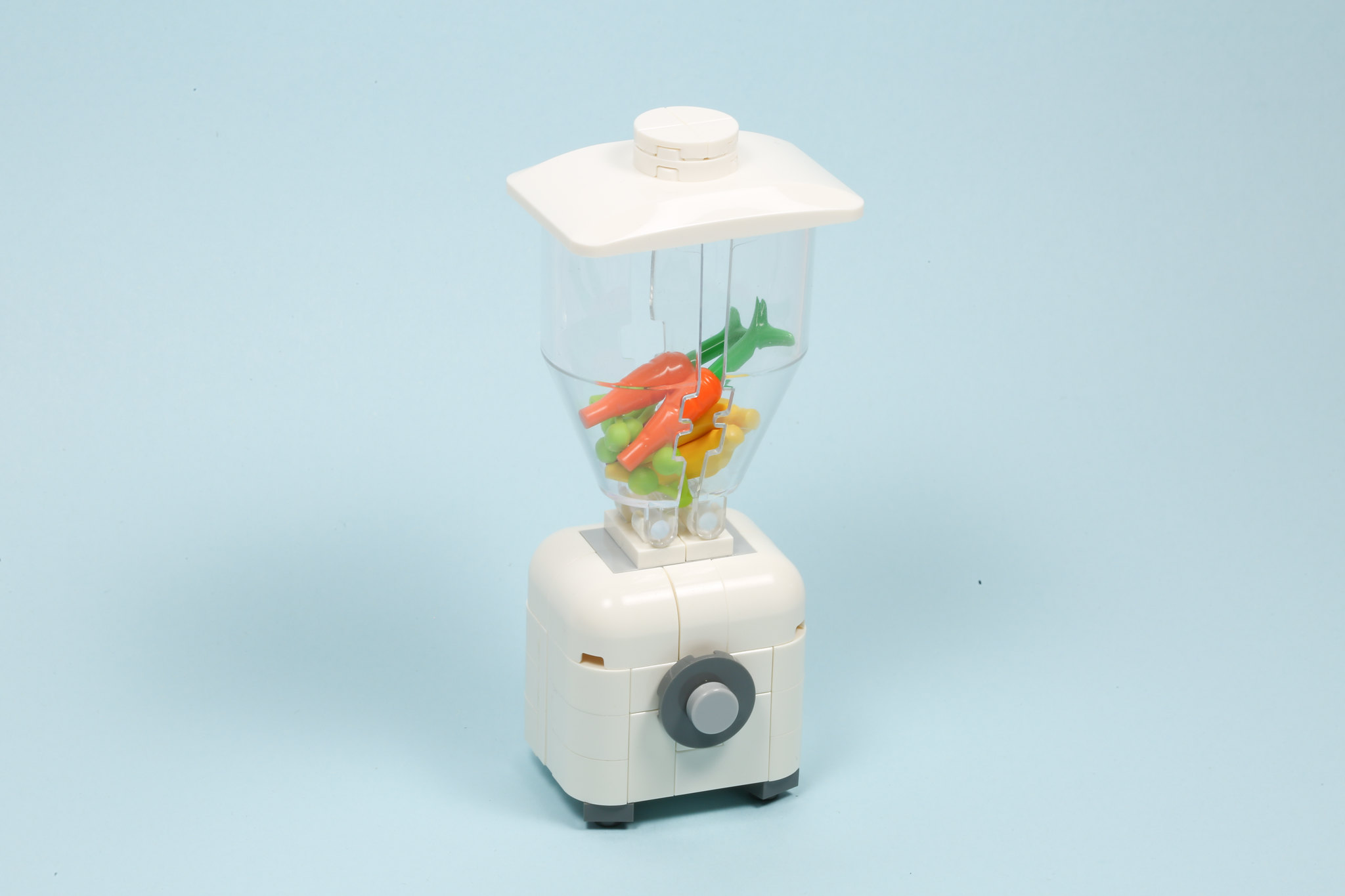 Personally, I haven’t seen a vacuum of this type since I was a child–it probably wasn’t my family’s first vacuum, but certainly the first one I remember. After seeing this LEGO vacuum built by Joffre Zheng, I had to do a google search to see for myself if such a model still exists; lo and behold they are still manufactured today even with all the Roombas and Dysons on the market. 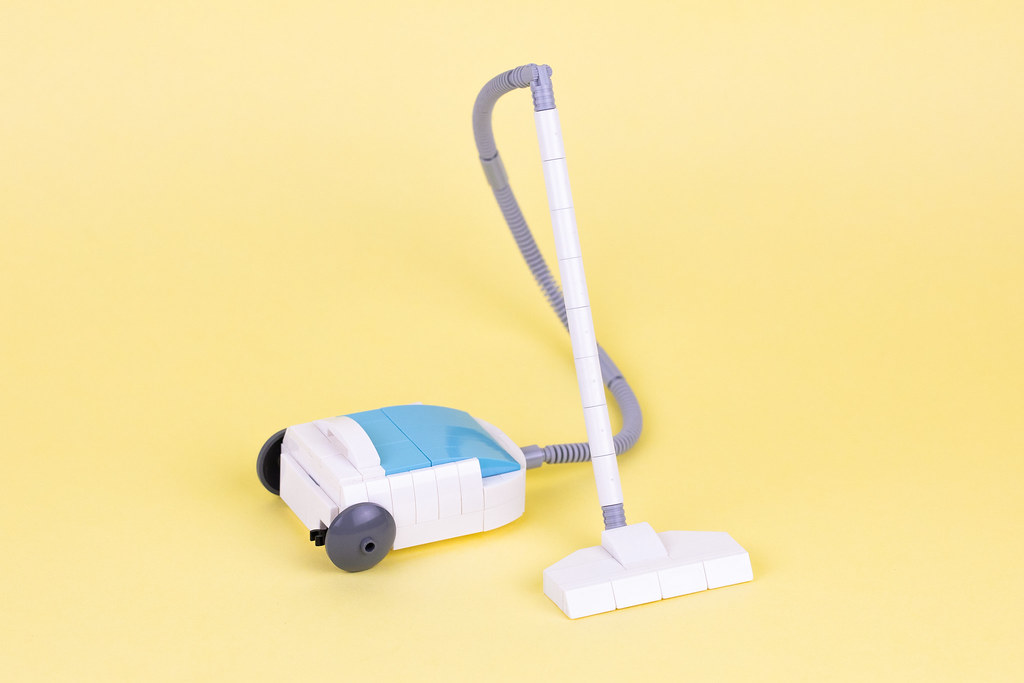 Joffre’s build is pleasantly simple and conveys the original object quite well. The canister portion makes use of some bricks, tiles, and slopes in white and light blue colors while the wheels are cleverly fashioned out of dark grey 2×2 dishes. The vacuum tubing is rendered by a flexible hose with tabbed back ends. The rod and nozzle components consist of some cylinder tubes, technic parts, as well as more bricks and slopes. It’s always nice to see regular household objects portrayed by LEGO, especially machines or other gadgets.

Santa Claus is ready to thwack some holiday cheer into the grinchiest of Scrooges. Created by builder Joffre Zheng, this ripped LEGO Santa spends the whole year getting swol to make up for all the cookies he eats on Christmas eve. 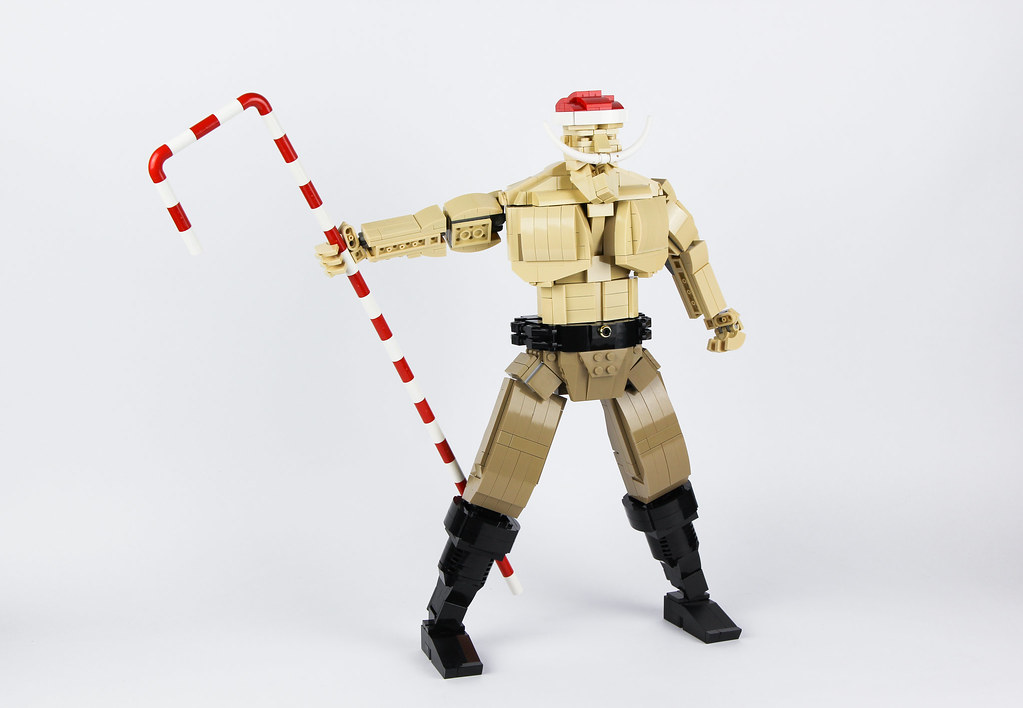 No beard? No problem. The white pointed mustache is all that’s needed to convince me to stay on the nice list. I really like how well this model is put together. The boots and pants both give a rustic feel to an already super manly Santa. The lack of a tall, pointy hat increases the size of his jaw, adding to the “I bench-press a dozen elves everyday ” vibe.

Let’s look at the candy cane. Some might complain that it’s not as curved in the crook as candy canes usually are, but here it works. The brutalist lack of gentle curves adds to the toughness of the build. I guess Santa’s body was less of a bowl full of jelly than we thought.

I recently finished watching the popular television series The Office, therefore any office supply or item reminds me of the show, this LEGO build of some desk essentials by Joffre Zheng included. 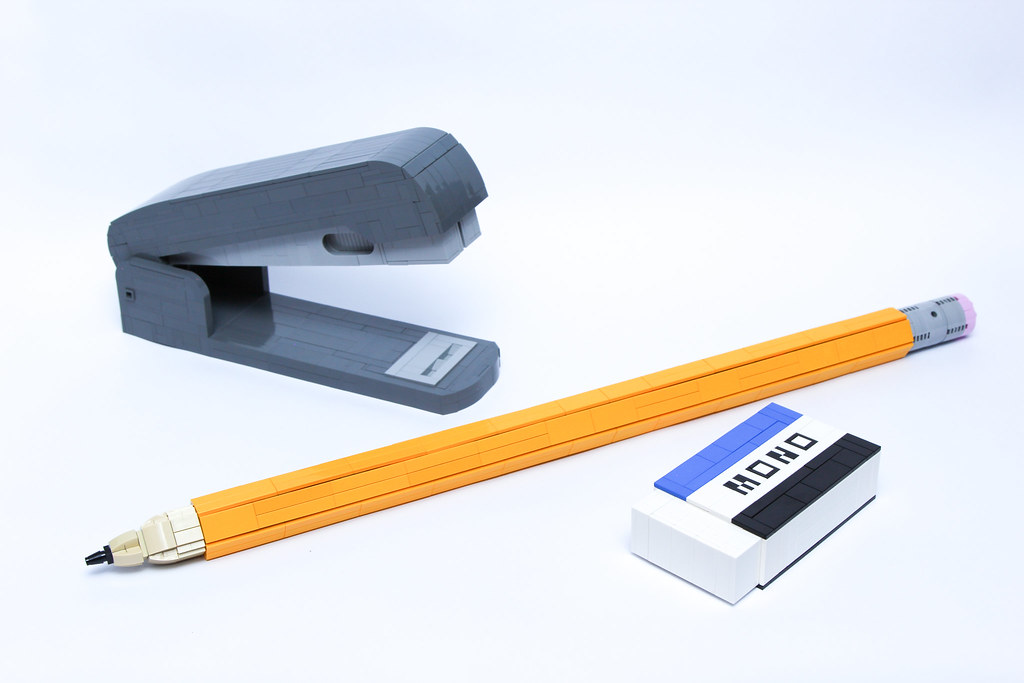 The brick-built models include a grey stapler, a classic #2 pencil, and an eraser. All three builds are composed of bricks with heavy use of tiling and slopes to cover studs and smooth things out. Judging by the grey round 4×4 brick with technic pin holes piece used at the top of the pencil to render the metal eraser binding, these builds are pretty large in scale, much larger than the actual real life objects. If office supplies are your thing, or you’re just missing the workplace or school, then this build is definitely for you!

A Tatooine man known as Darth Vader has ruined his son Luke’s life and chopped off his hand, sources told our reporters last Monday. This creation by Joffre Zheng depicted the scene immediately after the lightsaber duel on Bespin where Vader and Skywalker took the kerfuffle onto a dangerous overhang. After slicing off Luke’s hand, a portion of guardrail and some other mechanical doodads, the two exchanged heated words. Vader had reportedly goaded Skywalker about the power of the Dark Side before revealing that he was his father. 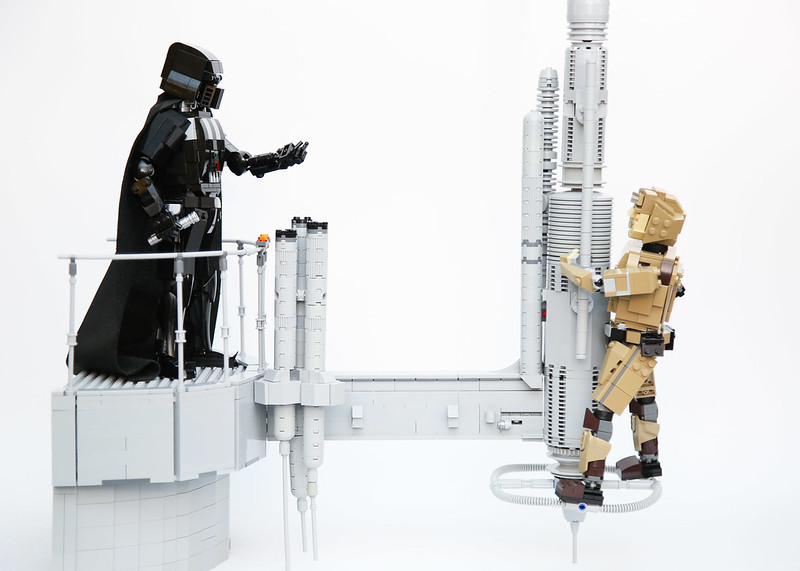 Unbelieving that such a deadbeat could be his dad, Luke jumped hundreds of feet then slid down what might have been a garbage shoot. He later emerged, clinging to a radio antenna beneath Bespin’s superstructure. Skywalker was later rescued on board the Millennium Falcon by his friends Chewbacca, Princess Leia Organa, and Lando Calrissian. “The kid was bummed”, Calrissian told our reporters. “Like, totally bummed, man.” Authorities were not called to the scene of the incident, and it was reported that alcohol was not involved. At press time Skywalker had also learned that Leia Organa was his sister, making the passionate kiss they shared earlier quite awkward indeed.