Generally, when one thinks about yore’s classic space themes, big spaceship builds come to mind and occasionally a tiny rover. The G Brix gives us something different – a very large LEGO rover which can be flipped over, each side with its own aesthetic, depending on your mood it can be Blacktron or the Space Police. 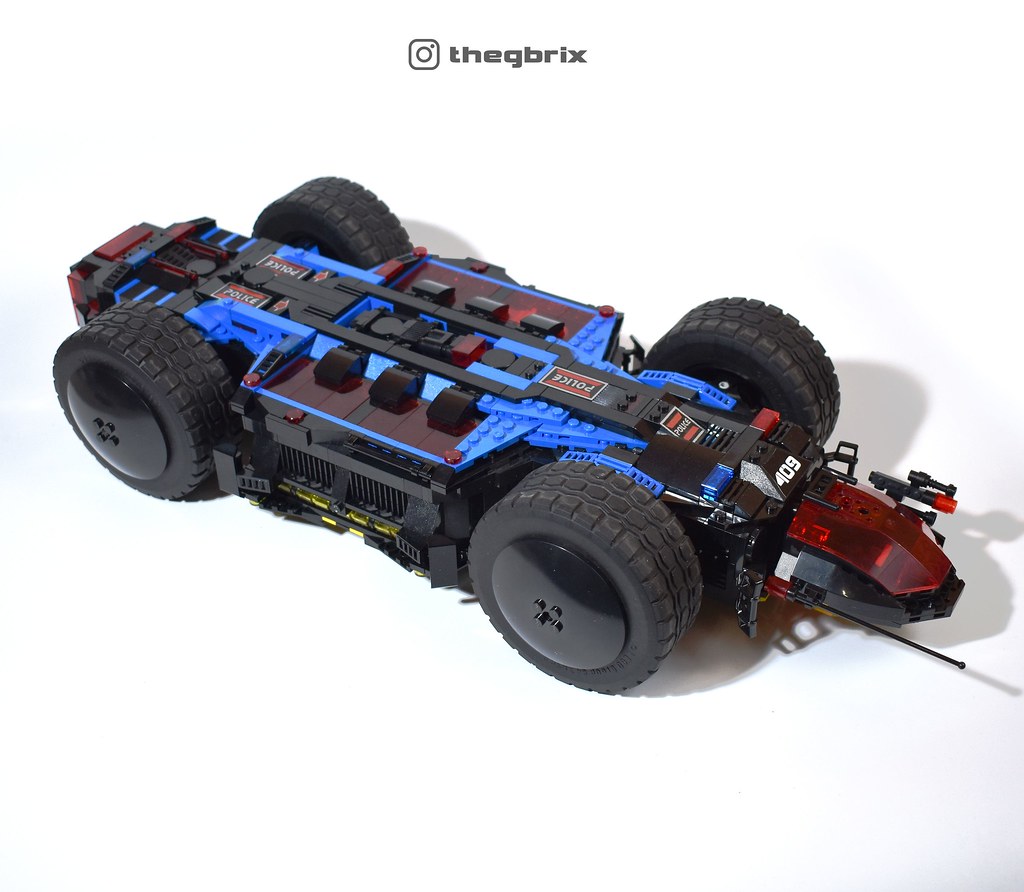 The space police portion of the build uses vibrant translucent red elements, including the cockpit, and brilliant blue elements such as tiles and wing pieces. Of course, there are some distinguishing printed “police” tiles and slopes. 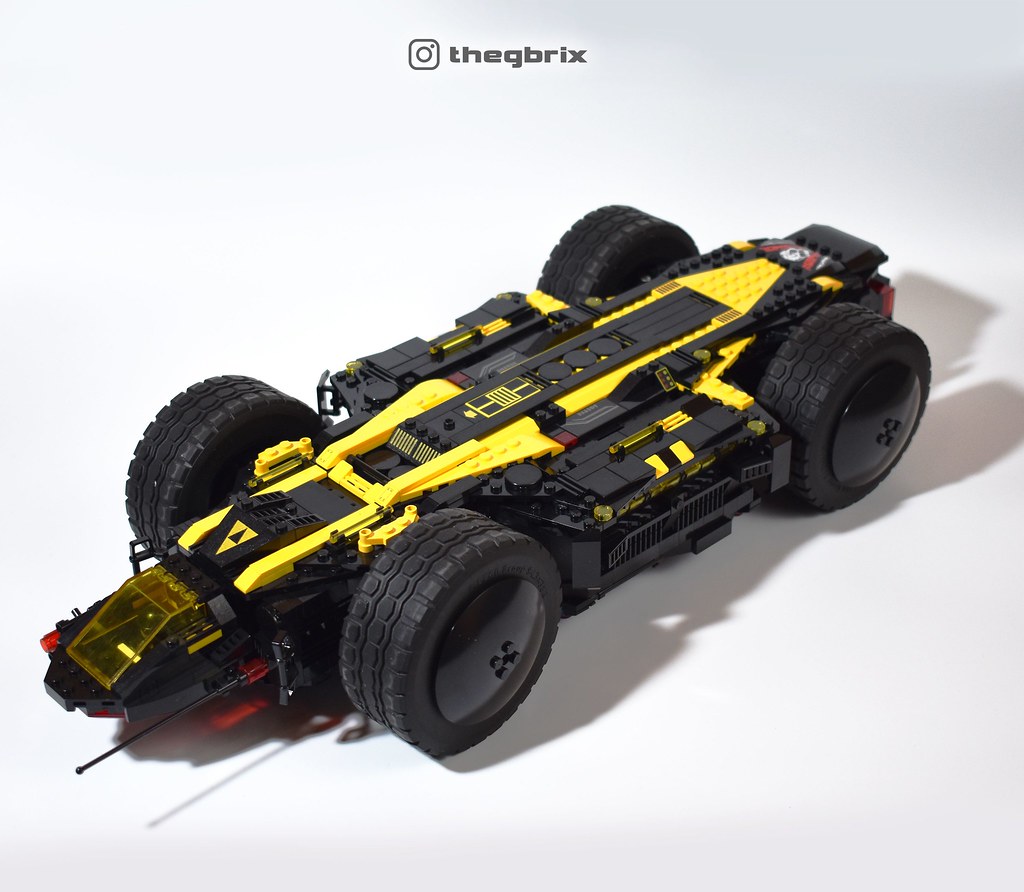 Now flip the build over and you get a very cool blacktron build complete in the black and yellow color scheme. Signature elements also included here are the yellow trans-clear cockpit and the printed slope with the blacktron logo. 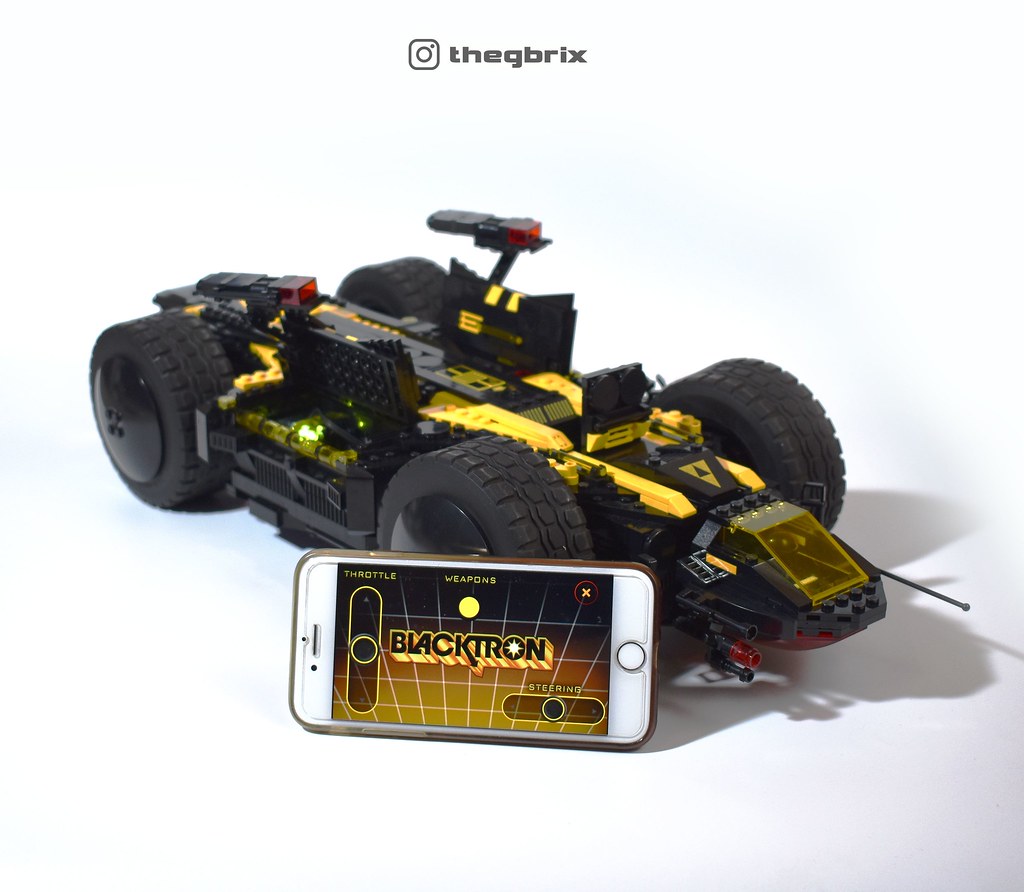 This vehicle is a model and an RC car as well that can be controlled through an app. Overall it is an awesome build for any fan of classic space themes villainous or heroic.

Have you ever seen podracing in 1/6th of normal gravity? Thanks to builder Rubblemaker, now you can! In real LEGO high definition! 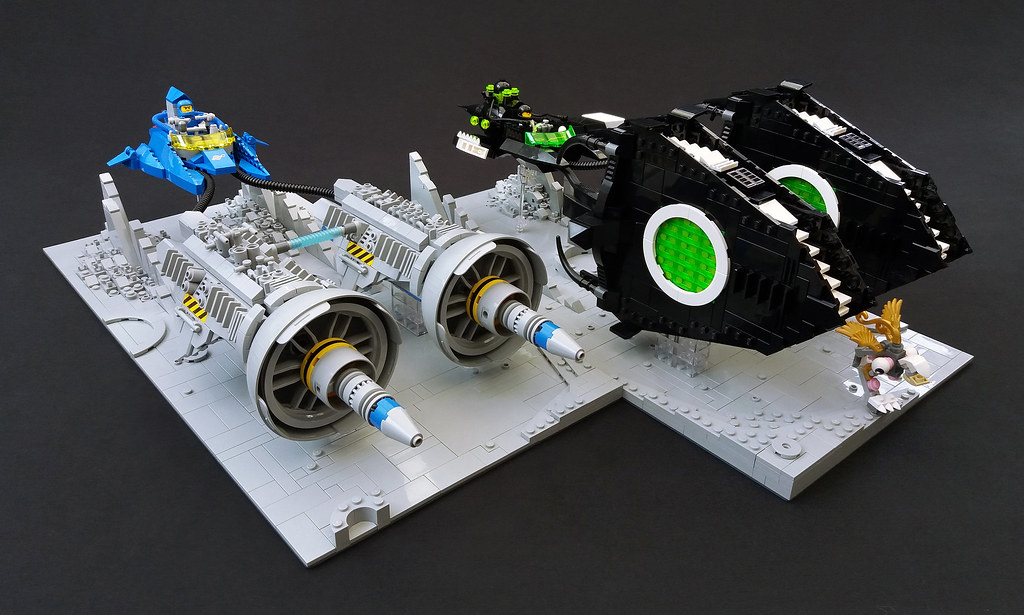 With a silent roar, four engines take off through the Sea of Tranquility, blowing up dust clouds visible from Earth. What you can only see up close, however, is the excellent detail work on each podracer. For example, look at the way each Blacktron engine is a sandwich of filters and fins, expertly crafted using flat brick pieces. Also, check out the dirt being blown up behind each pod; it definitely gives you the idea that these pods are flying along the lunar surface!

Excerpt from Captain Nathan Proudlove‘s Log, M-Tron Freighter Miranda: “It was supposed to be a routine trip. Get the cargo, haul it to the destination, and go back home. But instead of cargo, the drop point consisted of this… thing. It was huge, like a long black dart bristling with death. We tried to reverse course and fired a warning shot at the Blacktron warship, only to realize it was in vain. Each of the three weapons bays on the warship opened to reveal gigasonic missiles, launched and reaching out to us like claws of an otherworldly deity. The bridge crew and I launched the escape pods and fled before it could catch us, but all other hands were lost…”

This behemoth is none other than a Neo-Blacktron Rocket Ship. It leaves a lot to the imagination, which is exactly what you want when building massive space ships. I love the detail here, such as the engine nacelles coming out of the wings’ front and back, and the sensor work at the rocket’s top. The three labeled doors on the side make me imagine that those are either weapon ports or docking bays, or both. The best part by far is the Blacktron logo embedded into the ship, stating the ship’s evil allegiance to the bad guys of LEGO space.

With the fleet of massive SHIPs we’ve seen lately it’s refreshing to know that someone still loves small, one-man spacecraft. This LEGO Blacktron attack craft was built by none other than The Brothers Brick’s own Mansur Soeleman. While he could have written a better post about it himself, once I’ve dedicated thirty seconds into a post, there’s really no stopping that engine. With that said, I’m smitten by Mansur’s use of these pieces from the Ninjago Arcade Pod sets. I also like that this diminutive yet deadly BT-145 Terribilis is named after the equally diminutive and deadly Golden Poison Frog. We’ve been smitten by Mansur’s creations before and while they refuse to give me the keys to our recruiting office, I’m guessing this is why he’s writing for us now. 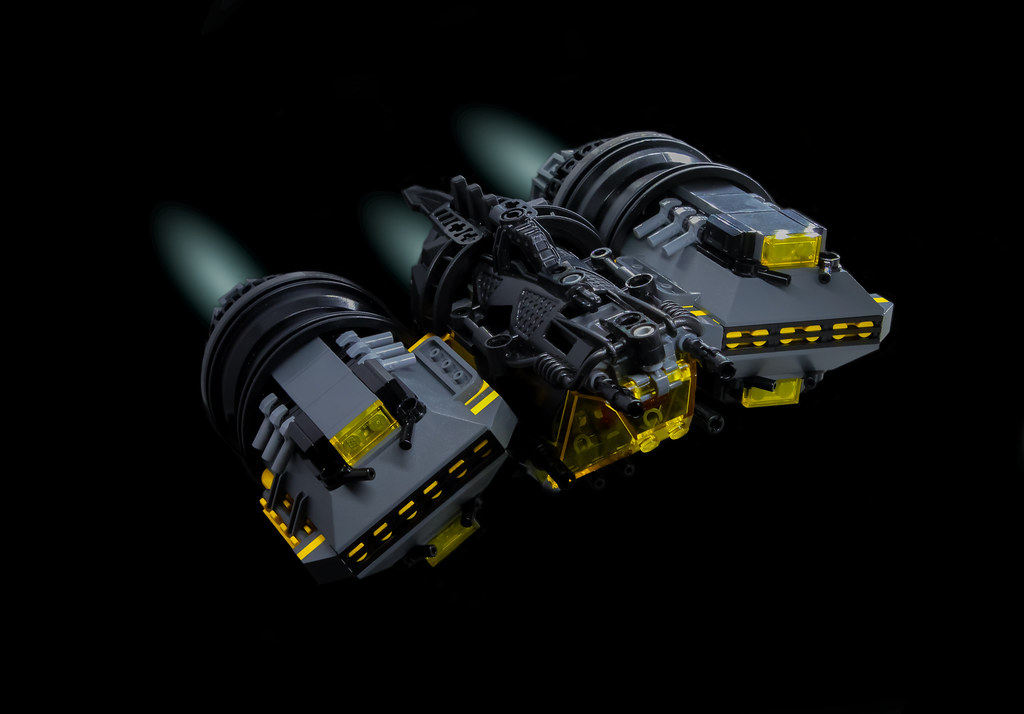 Some say that IKEA is for grownups what LEGO is for kids. I say, why not have both? Builder Kalais seems to think so too. 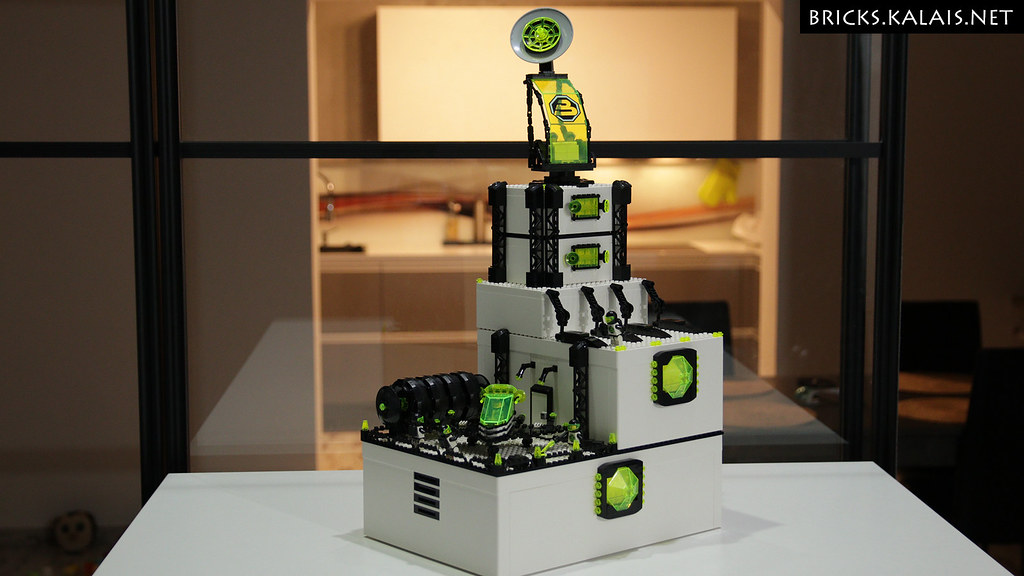 In probably the first example I’ve ever seen, Kalais used the new IKEA BYGGLEK storage boxes for a very modern-style Blacktron base. As far as getting the Blacktron look, this creation succeeds. From the laser-lime windows to the black and white accent bricks, you know this base belongs to the infamous space-faring evildoers the second you look at it. I especially like the power generator made from large wheels. Very clever!

The one downside about the BYGGLEK storage bins is that they don’t connect as regular LEGO bricks do. If you stare hard enough at the space base, you can see that the boxes are sitting on top of each other instead of locking in like normal bricks. Kalais has made up for that by using black bricks in places to give the illusion of the base being one solid tower.

This is a fantastic example of what you can do with non-traditional pieces like the BYGGLEK storage boxes. I hope to see more people become inspired by Kalais’ creation!

Black and Yellow, you know what it is – the 1980s LEGO Space theme “Blacktron” featuring a color scheme with heavy usage of black and yellow. In Nagisa’s build aficionados can get the best of two worlds – Star Wars and Blacktron as this design is a mashup of the two themes. Fusions of LEGO space themes with pop cultural icons are pretty common among fan-builders, but they are always refreshing to see nonetheless. Here we have the landspeeder from Solo: A Star Wars Story film which was already translated well into LEGO in set 75209, revamped in the style of Blacktron. Nagisa uses vintage control panel printed tiles and a newer curved yellow trans-clear 3x6x1 windshield to accomplish the signature aesthetic of the Blacktron faction. Of course, two fully decked out Blacktron minifigures accompany the speeder as pilots. 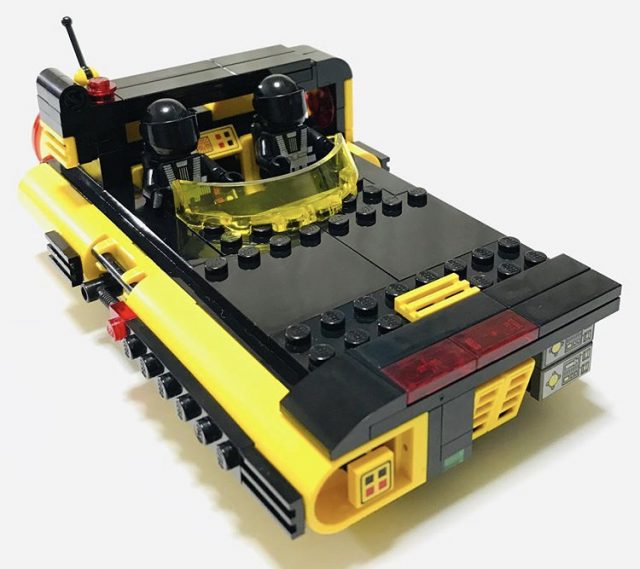 Nagisa offers a few configurations of the speeder which utilize different elements as thrusters – each offering a slightly varied look all of which are pretty sleek. Overall Nagisa does a great job of displaying creativity and ingenuity while still retaining the original concept of the vehicle from the Star Wars film. 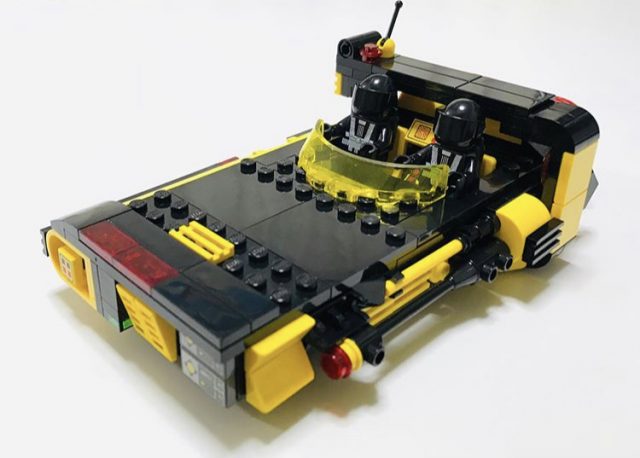 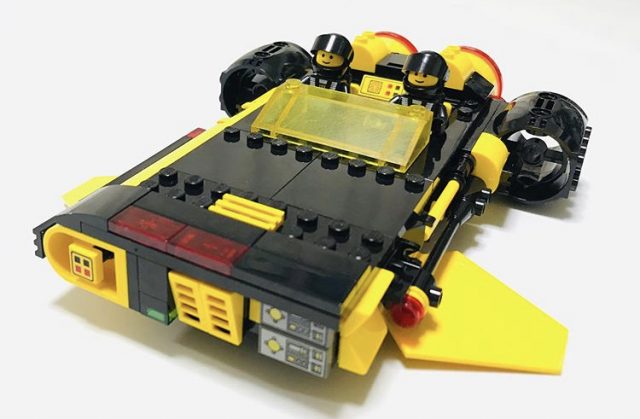 Halloween in space must be terrifying with these giant mechanical spiders crawling all over the place. I always knew Blacktron was the outlaw faction of LEGO space, but creepy spider mechs just might take it to a whole new level. Builder ZCerberus has carefully woven a design that’s spindly in all the right places, while still looking satisfyingly armored and menacing. And that trans-yellow X-pod canister for the cockpit is just the perfect touch. 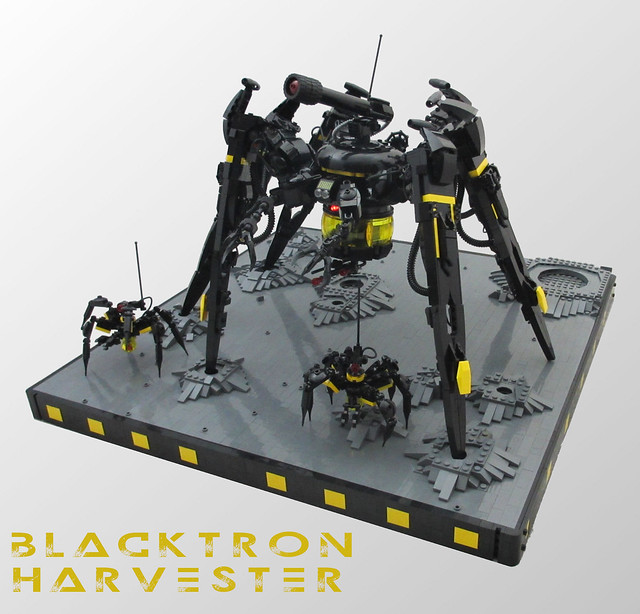 My favorite letter of the alphabet is B, followed closely by S; not because I like to call people on their BS, but because those are my initials. In fact, my love for the letter B was one major reason why Blacktron II (or Future Generation) was my favorite space theme, with the green B emblazoned on their chests. It was like a whole crew of Benjamins. Dave Kaleta, fresh off a series of alphabet space ships, brings us the best letter of all. And, like the ships of Blacktron II, it comes apart (or combines, depending on your point of view). 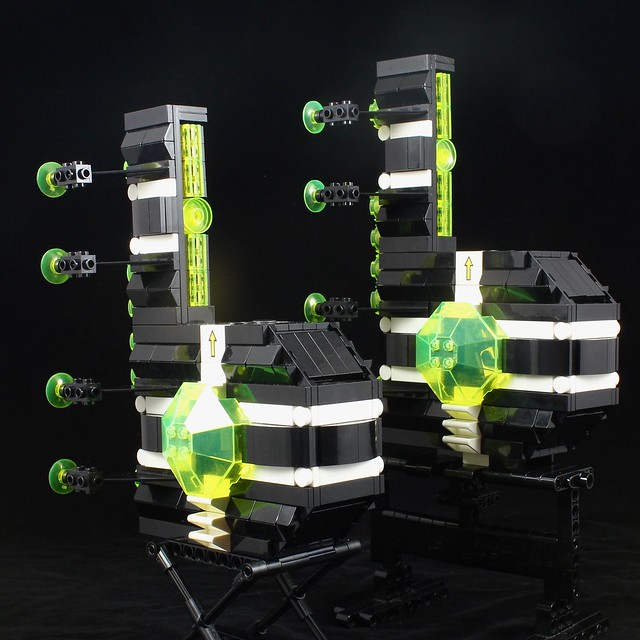 END_OF_DOCUMENT_TOKEN_TO_BE_REPLACED

When it comes to collecting vintage LEGO Space subthemes, Blacktron I has a strong following. LEGO’s first intergalactic villain faction has been reborn in the form of Spaceruner’s Lucky Wolf, clad in the classic Blacktron I colors of black, yellow, and trans red. One source of inspiration was set 6894 Invader, released in 1987. They have even gone so far as to create their own robot. By utilizing both vintage and modern parts, the end-result is a model that’s out of this world. 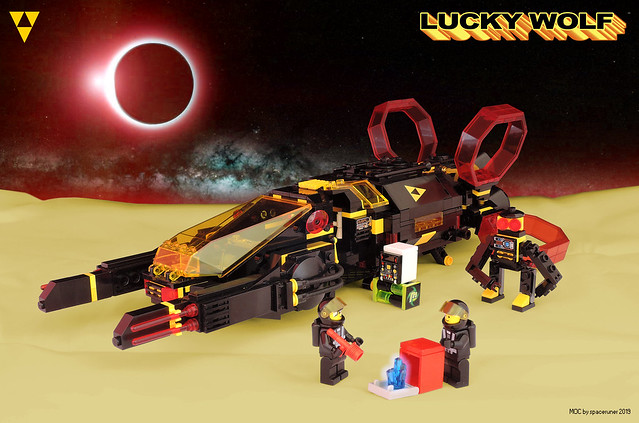 If you love Blacktron I, you might also enjoy this Blacktronesque laser mining vehicle we featured on April 16th.

Looking at this Tracked Laser Mining Vehicle by Jon & Catherine Stead, the first thing that springs to mind is classic Blacktron. A few details seem out of place in this assumption and the description reveals no villainous intentions. The yellow spacemen suggest this is in fact very much a peaceful vehicle. I particularly like the laser array, supported by strings going between pillars of translucent red 1×1 round plates. The ground is quite interesting as well, using an established technique and carrying us to a faraway moon or planet with its colours.

A long time ago, in a toy box far, far away…there were Classic Space LEGO sets. Blacktron followed in 1987 and was characterized by its black, yellow, and transparent yellow color scheme. They were a thriving intergalactic crime syndicate until the Space Police tracked them down in 1989. Many LEGO fans have created custom Blacktron-themed models over the years, including Jme Wheeler, who built this imposing dropship as a tribute. The model does a great job of capturing Blacktron’s distinctive aesthetic. 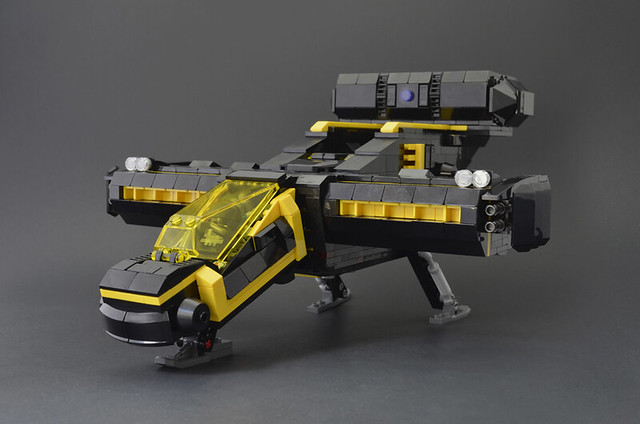 The dropship features retractable landing gear, a bomb bay in the belly that drops, and a substantial missile rack that unfolds from the tail. I think it might even be packing more firepower than the U.S.S. Sulaco’s dropship from Aliens. 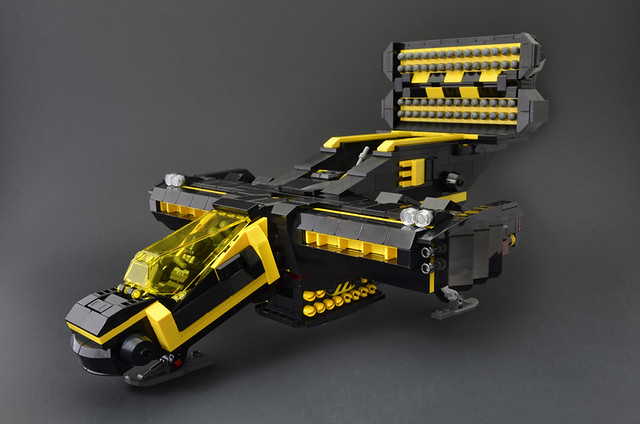 Model-builder Spaceruner has been around the online LEGO world for years putting out updated or re-imagined versions of classic sets. His latest model is the Angulus, a unique twist on the old Blacktron II LEGO theme (and is in a lot of ways an evolution of his older Piranha model). 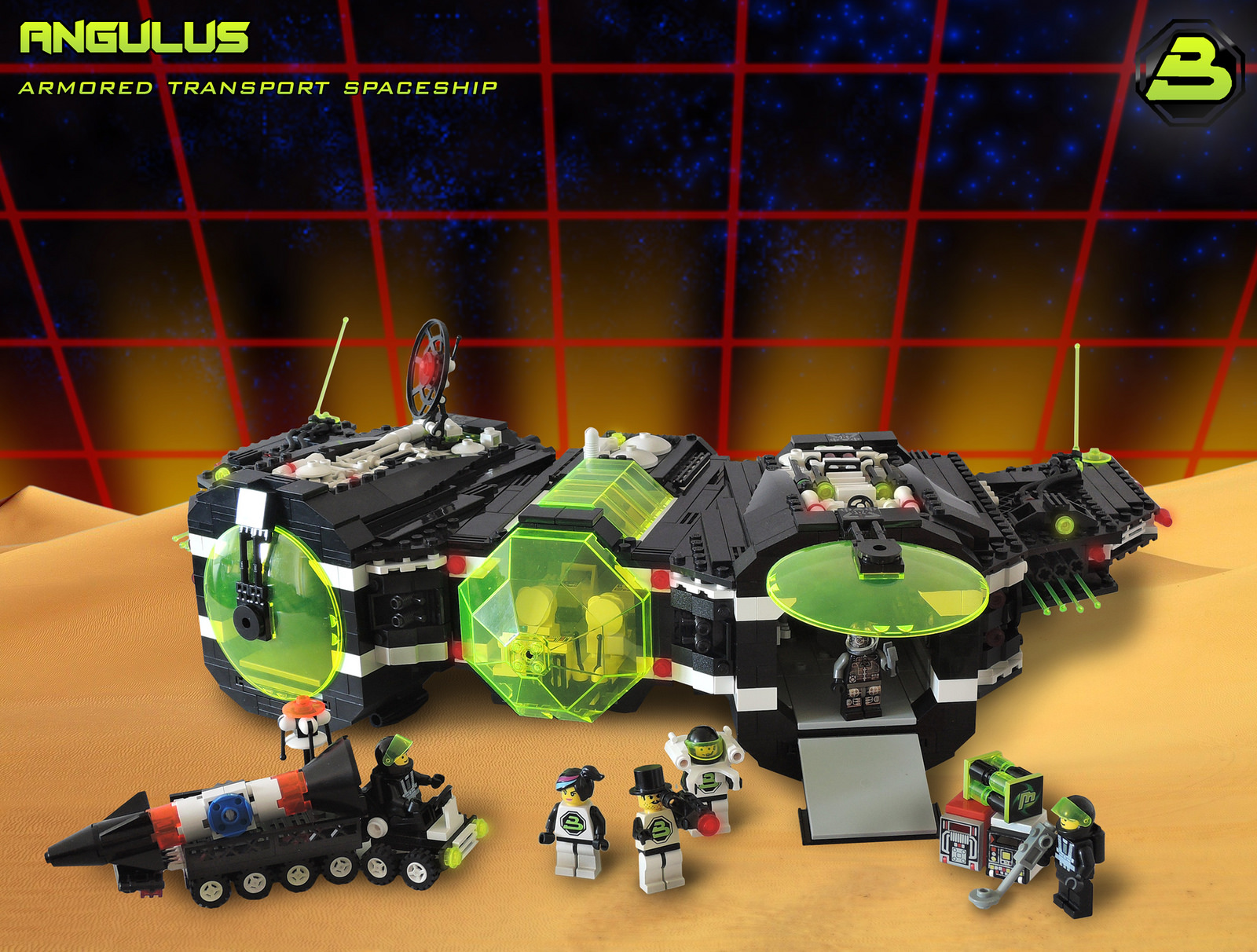 Many of the usual Blacktron II staples are here: the contrasting black and white color scheme and octagonal trans-neon-green cockpits foremost. What I appreciate most about this model is how modern it feels without feeling obligated to shove a bunch of newer parts into the build: most old-school LEGO fans of the 80s and 90s could probably duplicate the majority of this creation if they still have their childhood buckets of bricks.