With the dawn of the day, Crow Knights once again begin their dutiful watch over the land. Builder markus19840420 gives us a beautiful glimpse of the Crow Knights as they keep the kingdom safe. 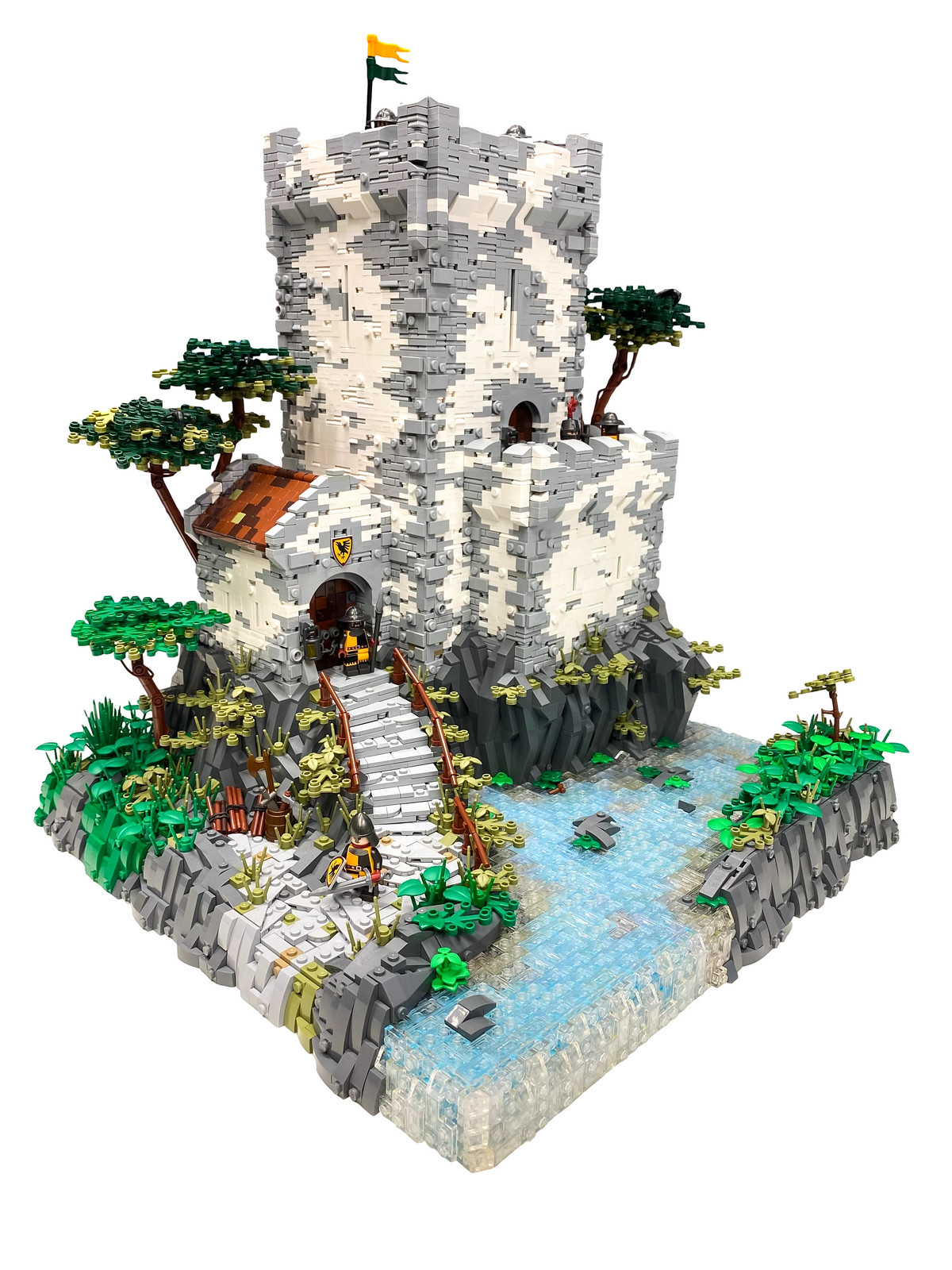 An incredible LEGO build resulted from hard work and tedious craftmanship. The way the water flows across the area’s base is stunning, especially how it flows off the edge like a waterfall. The plant life is perfectly placed. I admire the use of white in the tower walls. It’s not usually a color used unless the castle is nearly completely white, but here it works, contrasting enough with the grey to make the yellow and black of the Crow Knights’ uniforms pop.

LEGO creations are true to the adage “a picture is worth a thousand words” in that they can tell amazing stories without any text. And even though Bart De Dobbelaer has provided a story alongside his creation, this one can speak for itself. 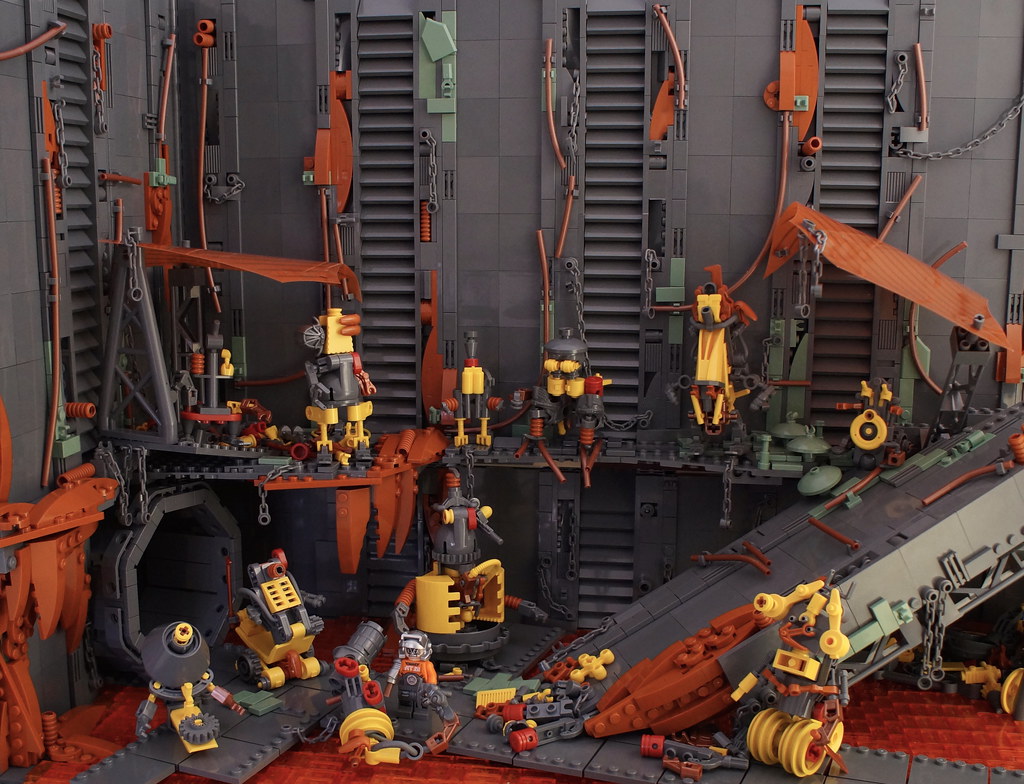 The backdrop of rusty and grimy metal – effortlessly conveyed with simple colour choices (dark grey metal, dark orange rust, and sand green algae) – tells you a lot about where we find ourselves. This isn’t a peaceful, pristine repair shop. No, it’s a rough and tough place. Those walls have seen some stuff. The bold colour choices extend to the numerous bots as well, with their rusty metal frames being complimented by a smorgasbord of fun parts usages in red and yellow. If you’re a LEGO parts monkey like me, you’ll have a heck of a fun time trying to identify everything used to build these bots. Lost in the chaos is the titular repairman himself, doing what he can to strap these bots together and keep them running. While I have hope he can fix some of these robot folks up, the story might not have a happy ending for all of them, as the smattering of loose yellow and red parts tell the story of those bots that didn’t make it to the party. 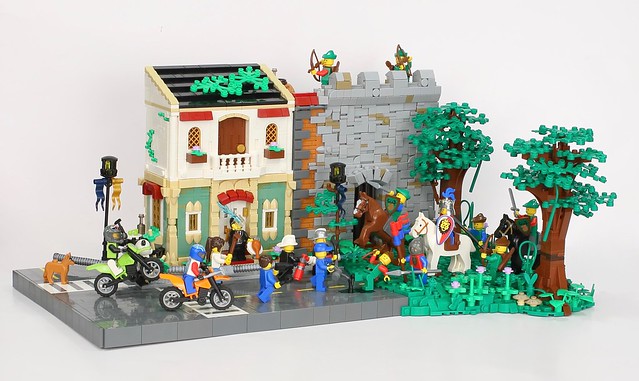 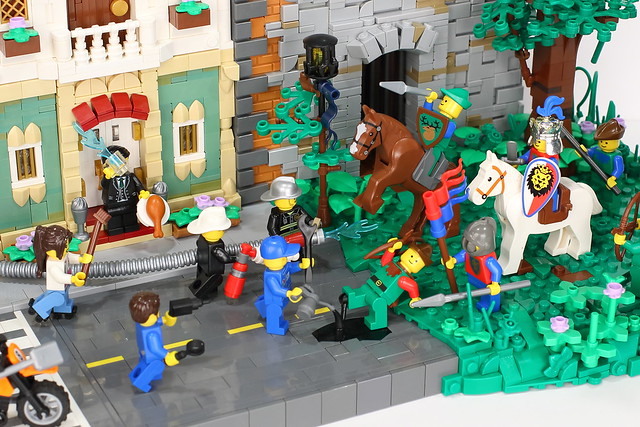 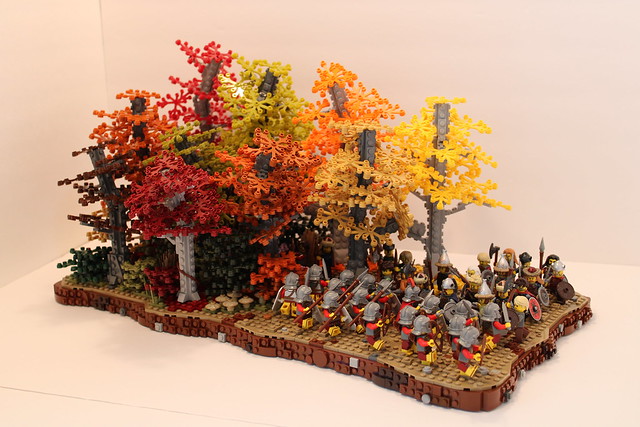 With the recent launch of Disney+, there’s been a lot of buzz about The Mandalorian, the latest Star Wars series to hit the TV screen. Builder Jaap Bijl reaches back into Star Wars’ televised past with a Star Wars: The Clone Wars duel between Obi Wan and the bounty hunter Cad Bane. The purple planet of Teth is well-represented here, with nicely sculpted rockwork and enough tonal variety to keep things interesting. 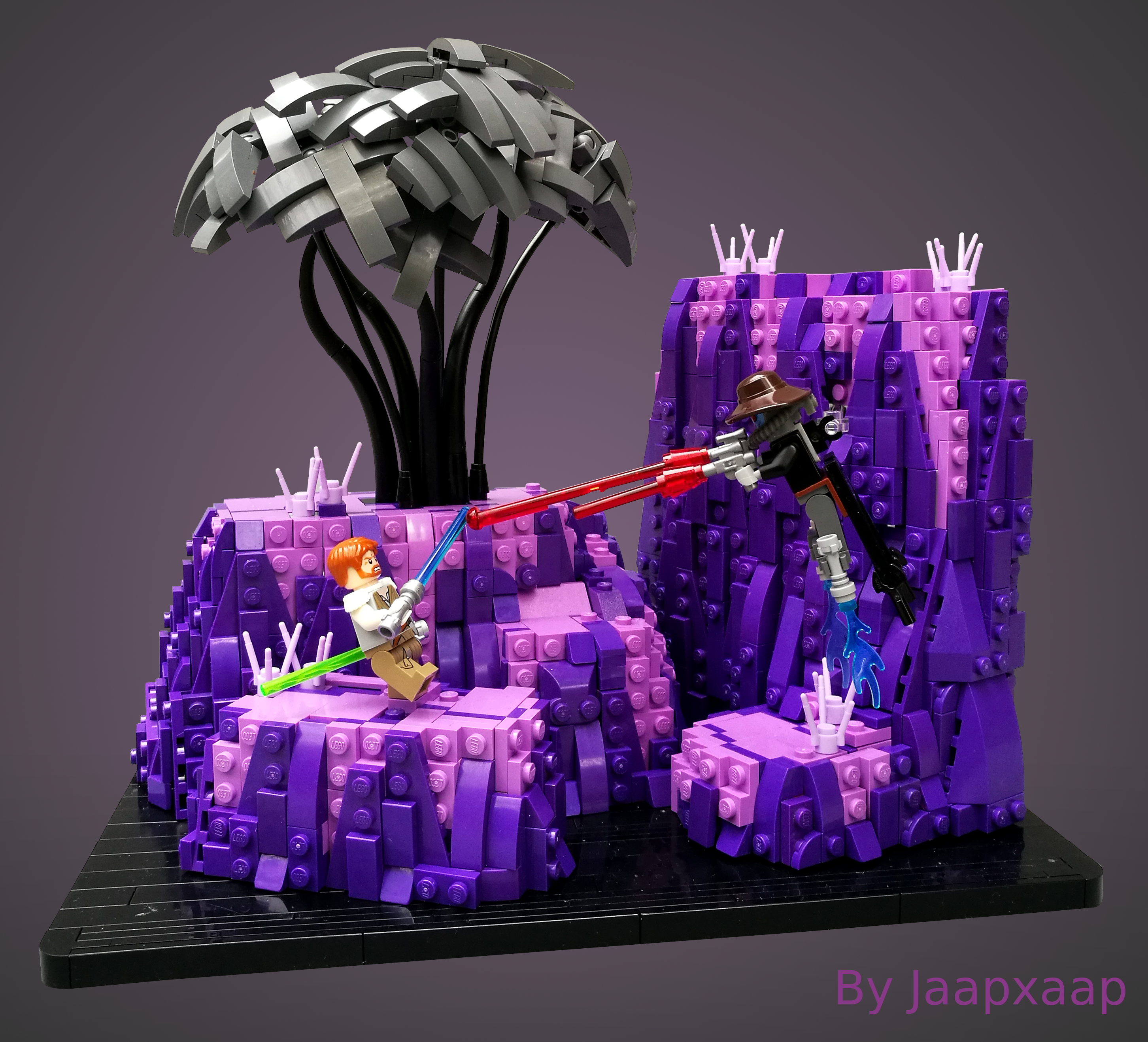 Both characters are locked in a fierce battle, complete with sabers waving and guns-a-blazing. While they may be the stars of the show, my favorite element in this scene is the black and gray tree. The leaves are cleverly sculpted from curved slopes, along with a few ball and socket joint connections.

If you are like me, you’re probably thinking the world could use more LEGO creations inspired by The Lord of the Rings. Am I right? Who is with me on this? As it turns out, Cole Blood (who, in my opinion, has the coolest name in the history of the world) has answered all our prayers with this stunning piece he calls “First Appearance of the Ringwraiths”. Having no physical form, the wraiths are cleverly depicted as hellish black apparitions that seem to seep into the landscape. The orc heads on pikes, the toadstools, and the small flowing stream create excellent visual cues throughout. Stay tuned, because this is merely one piece of a larger Second Age collaborative series we’ve been covering that Cole is participating in with his equally talented friends. I will eagerly wait, right after heading over to the registry to change my name to Rex Awesome or something. 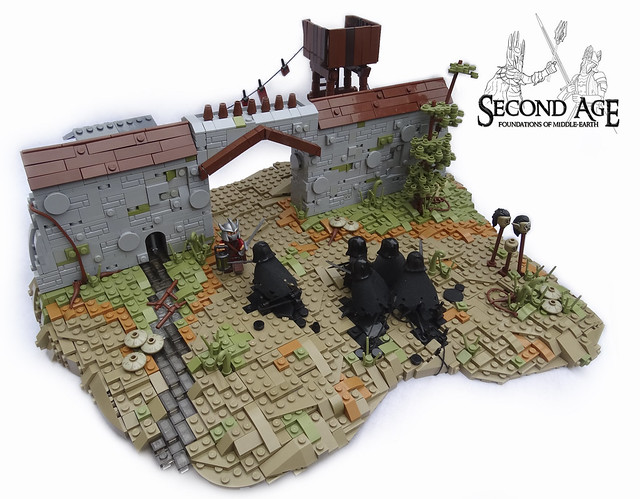 The trading of cannon broadsides was surely the bluntest form of projectile warfare. Huge ships, passing within yards, blasted cannons into each other’s sides as quickly as the sailors could reload. Simon Pickard brings the fury of battle under sail to vivid life in this LEGO creation — a frigate and a galleon all set to pound one another into matchwood. The tightly-cropped image creates a real sense of action and drama — you’re just waiting for the splinters and blood to start flying. The brick-built ship hulls are impressively shaped, and the sails are beautifully done. This is a close-up view from a large-scale pirate-themed LEGO layout we featured previously, put together by British building collaborators Brick To The Past. 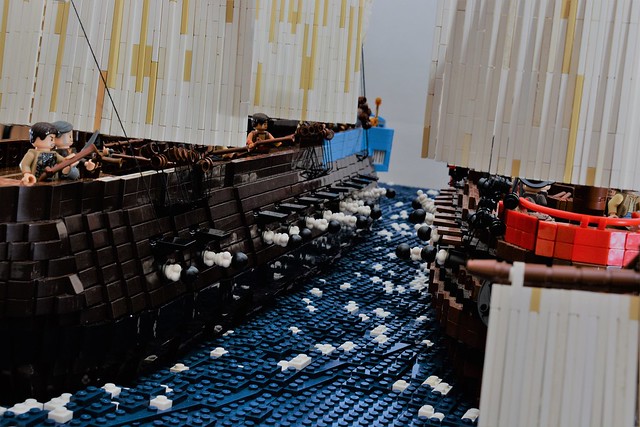 Earlier this year we wrote an article about two builders from Australia who came together to create an epic mythical scene. Their inspiration came from a Nordic legend about a pair of warriors who slay a fiery dragon. One of the builders, Ben Cossy, continues the tale with the dragon he calls “Yddreig the Red”. Now we have a snapshot diorama of the confrontation about to take place. It must have taken countless hours to create the incredibly detailed landscape, which features amazing rock work. Everything is positioned in a way that really brings it to life and sucks us straight into this fantasy world. 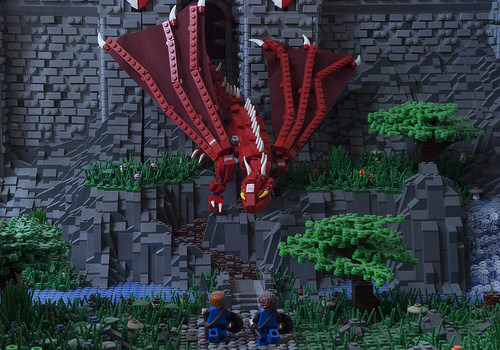 One thing is for sure: our heroes look like they have quite the battle ahead of them to survive.

It will take more than a little snow to put the chill on this conflict between the red clan and the blue. Part of a larger collaborative project depicting a clash between two rival factions, the battle is heating up at this mountain fort by h2brick. Demonstrating some amazing rockwork, along with plenty of snow, and an icy stream, a precariously steep path, and some very nicely detailed walls. 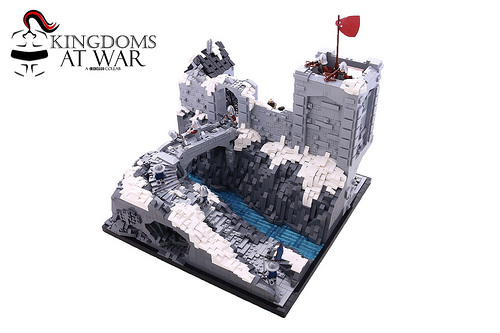 There is no doubt that William Navarre is one of the best and most active LEGO builders out there, churning out build after build of great quality almost every week. This one and his previous creation were built for the Colossal Battle Contest. 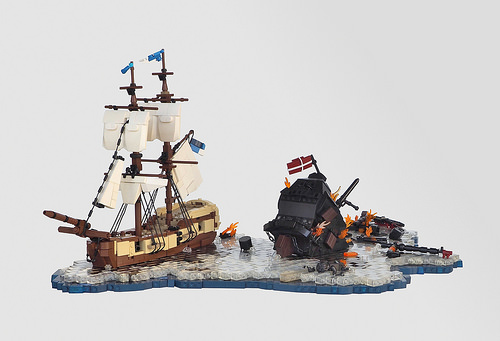 This naval battle has a lot going for it; the positioning of the ships is very expressive and dynamic, not to mention how well they are constructed. The scale is deceiving and the details are amazing — from the burning elements of the sinking ship to the rigging on the victorious side, each vessel is worth looking at individually. What I like best though, is the surrounding water, achieving a realistic look with two layers, a top textured one, and the bottom for colour (and a great look from the side!). William’s creations seem to have a theme of their simpler environment ending up capturing my attention even longer than the build’s focal point… 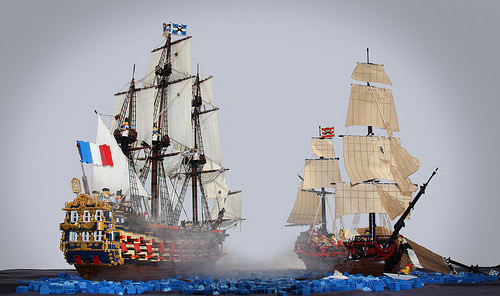 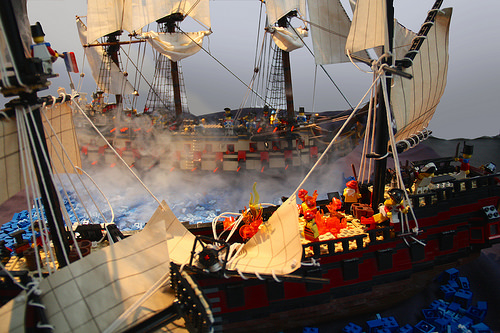 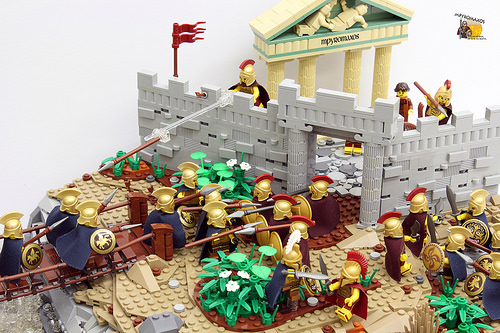