Marcin Otreba drew inspiration from the classic folklore tale of Baba Yaga. And he’s not the first one to use this story as an inspiration for a LEGO creation: we’ve featured numerous chicken-legged cottages throughout the years. Marcin’s is special because it’s so tiny yet so packed with details. It’s so small it almost has you wondering if the witch will actually fit into the cottage. The answer is yes, of course! It is a magic cottage, you silly! The arms with pins introduced in the Super Mario LEGO sets are used to create all sorts of odd angles, and the fact that the cottage is asymmetrical makes it even more aesthetically pleasing. But the most hilarious thing about this creation is the fact that Baba Yaga is riding a Belville broom which is far bigger than her house. 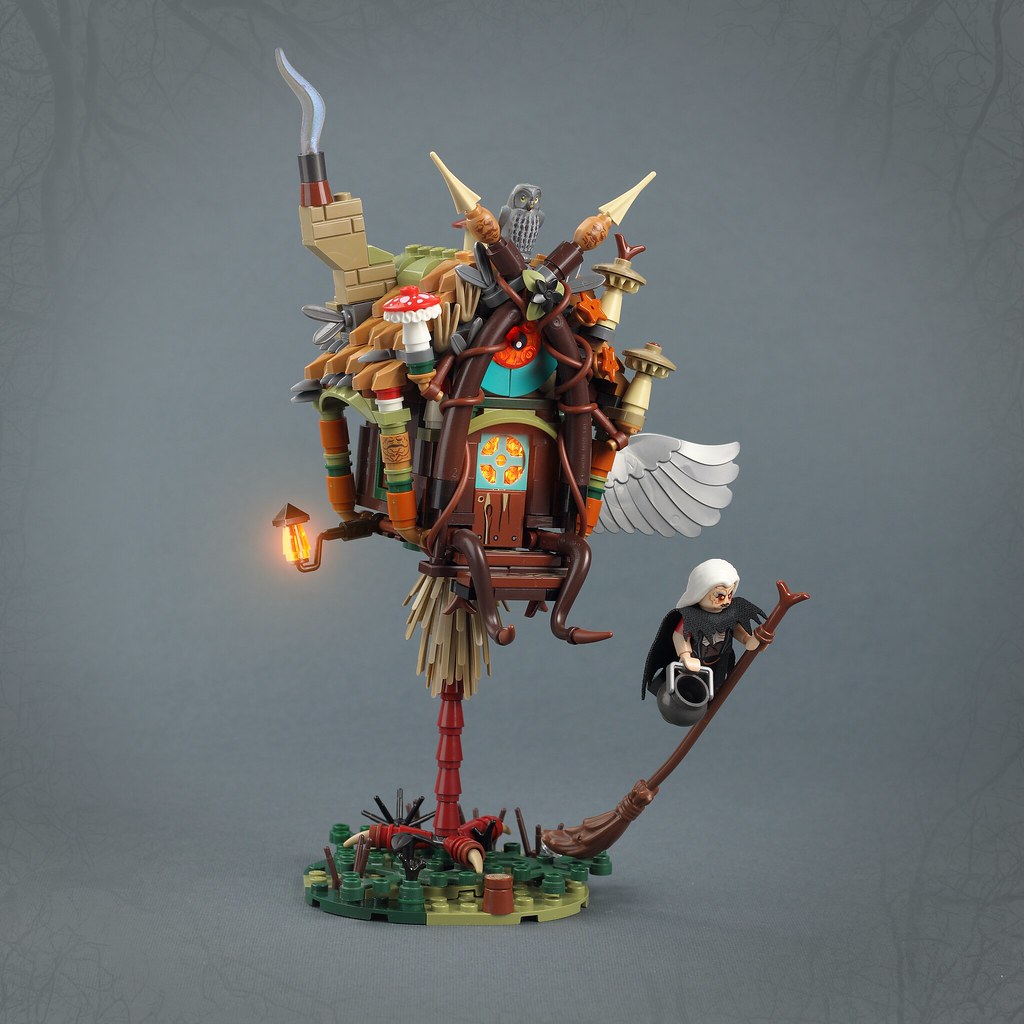 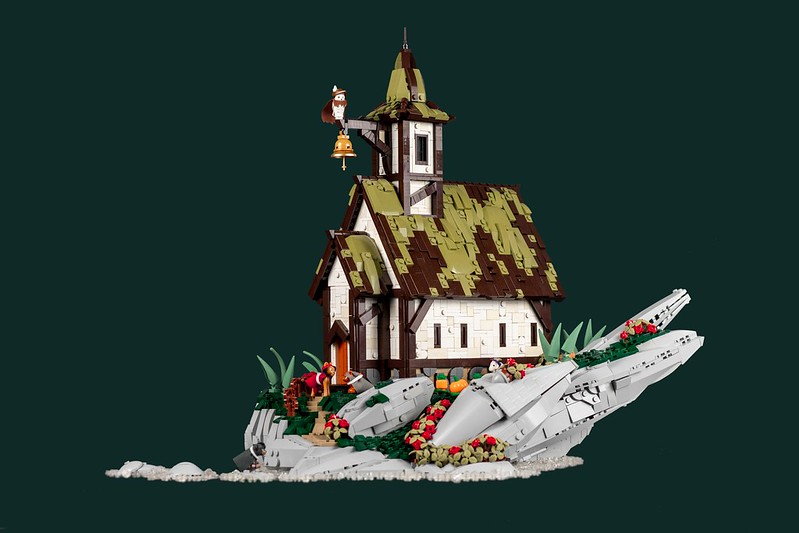 This LEGO creation by Jonas Kramm really reminds me of the Smurf toys I used to have as a kid. It is simply amazing. Jonas was inspired by the Forest Elf minifigure and I can totally understand why. It is by far one of the cutest minifigures ever produced by LEGO and it goes along with this creation wonderfully. This model features a big mushroom which is used as the elf’s home. The vibrant blue color used for the door and the windows is a nice contrast to the red mushroom cap. It even comes with white scales. 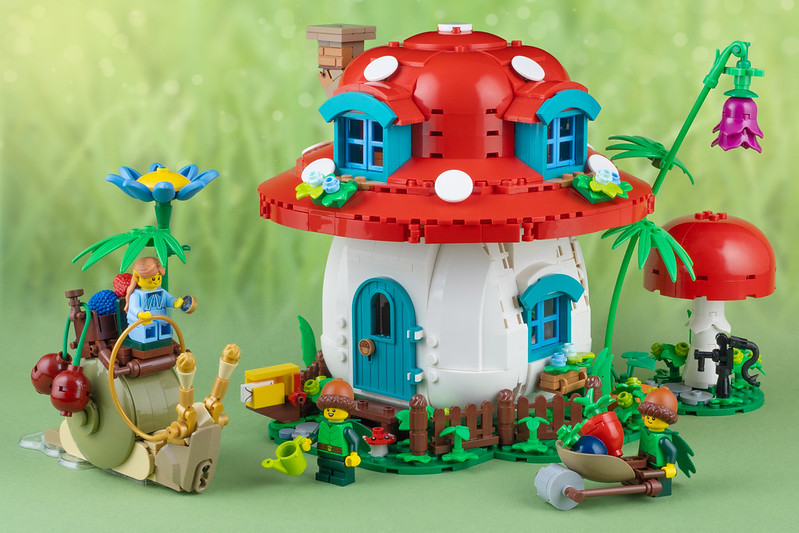 Next to the mushroom home there is a smaller mushroom growing. (Maybe it’ll be someone’s home in the near future.) This little mushroom features the plate with crown leaf as the skirt of the mushroom. Jonas’ eye for detail is truly remarkable. I do have to admit that we featured the snail build before, but it goes along great with this creation and I understand why it was included as it is still a wonderful build. Using the foot plate in trans clear is a smart way to mimic snail slime. I want at least half a dozen of these, preferably with different hood colours and little blue minifigures.

LEGO has been into books as of lately. We got the LEGO Ideas 21315 Pop-Up Book, the Hogwarts Moments books, the Disney Storybooks, the 40410 Charles Dickens Tribute, and more. So as a LEGO fan, why not hop on the trend? That is exactly what Ted Andes must have thought. They created a series of lovely hardcover books with Art Nouveau-inspired cover art to go along with the Wasp-wing Table Lamp we featured a while back. 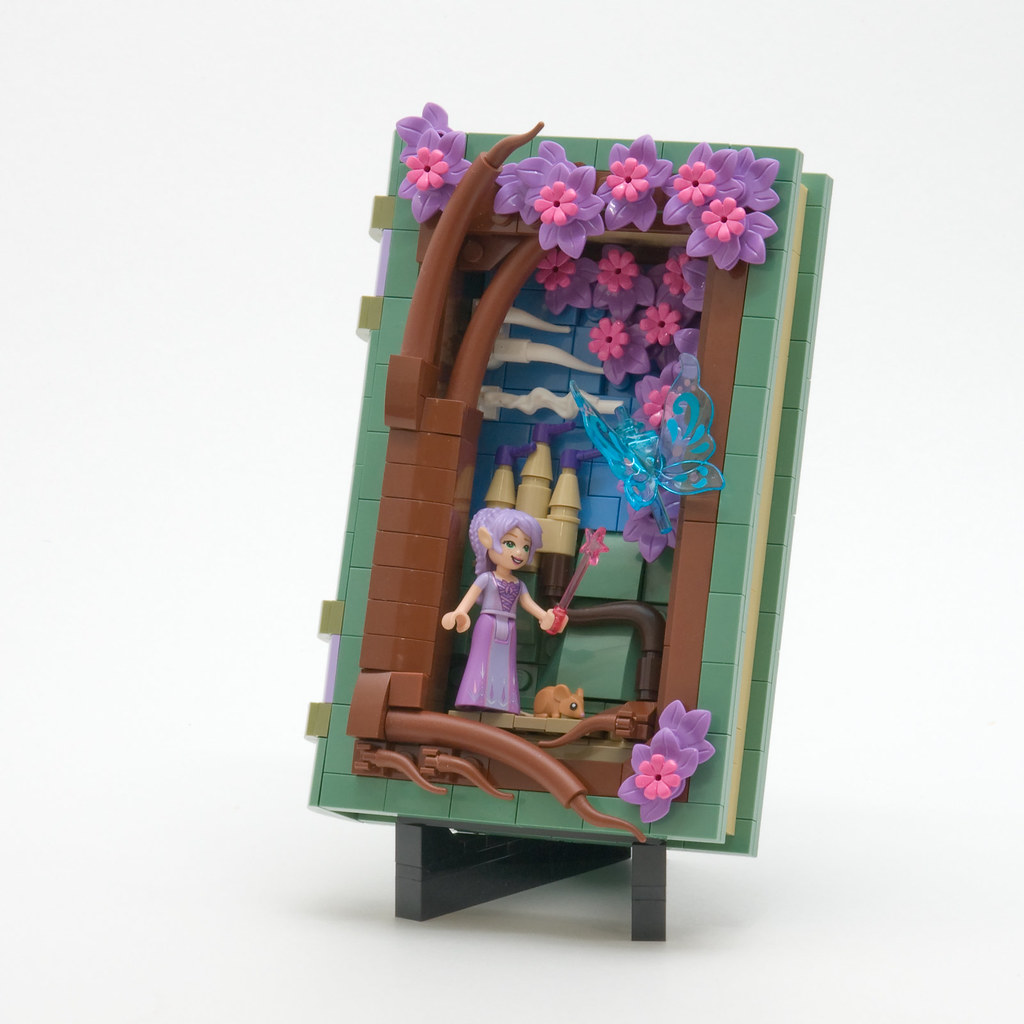 The blue book looks quite elaborately embellished with golden details which make the satin white jewels pop. The green book uses Spider-Man’s web as a very artistic cloud and the minifigure butterfly wings are used to represent a magical transparent butterfly. Most of all this is a very ingenious way to display minifigures you like and it can be translated to any theme. 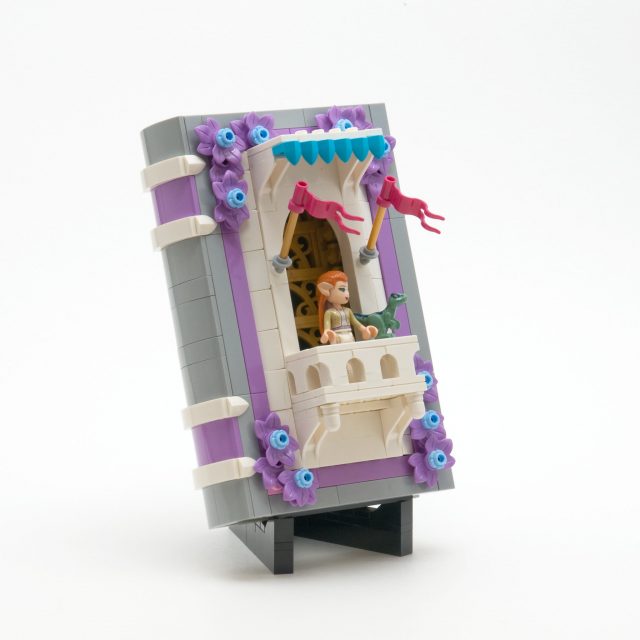 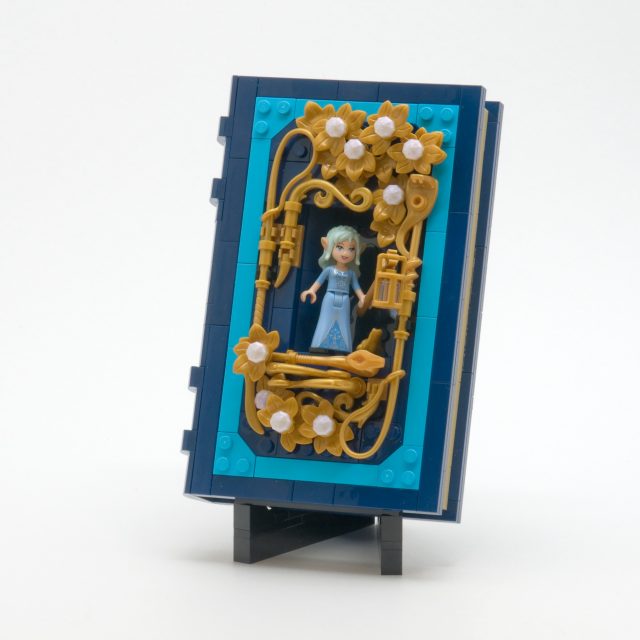 Busts have become ever-popular, and with them have come a wealth of fun ideas. Builders trying their hand at sculpting a character’s features with bricks are forced to try new things and innovate. This Goblin bust by builder Jnj_bricks was such a foray that was definitely successful. Texturing really helped this character come through, from the spikey, short hair to the boats used in his jacket. The knobbly, green skin translates well as a Goblin, as do the bright orange eyes which hold a mischievous light. The gold earrings and jutting jaw with sharp teeth add that extra bit of character emblematic of this trickster species in lore, old and new. 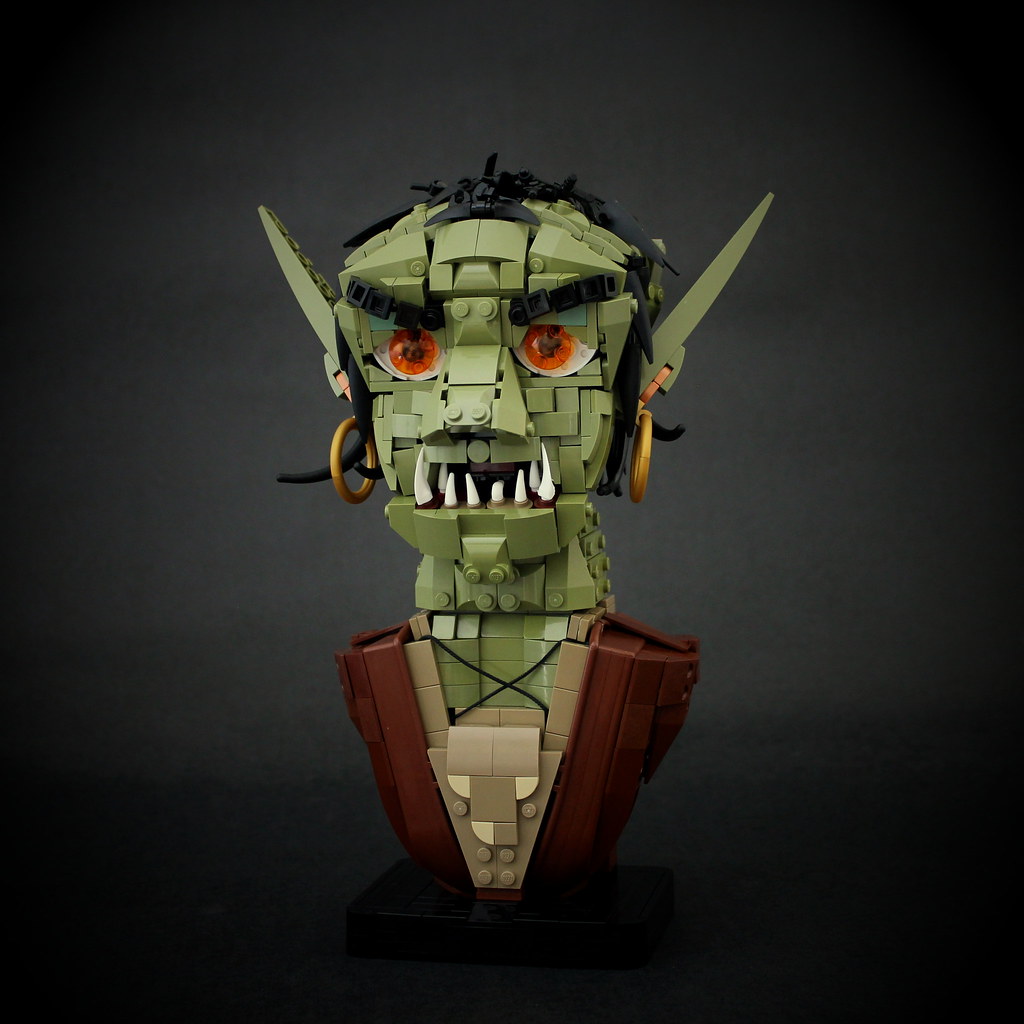 Quite a few techniques were used to achieve all the interesting angles and textures of this build. Though Jnj_bricks says this is a very different style for him, it’s clear it wasn’t too far out of his range.

We’re all familiar with the story of Jack and the Beanstalk. Probably everyone reading this can sum it up in just a few words: Magic beans, giant’s castle, golden goose. But how many of us could tell the story in brick form as well as Markus Rollbühler has? Considering this vignette sits on just a 12×12 footprint, it’s amazing how much technique is packed into it. From the books and their detailed pages, to the microscale farmland, to the magic castle in the clouds. I’m particularly enamored with the use of Clone Trooper helmet antennae as a windmill. And that brick built “J” replicating a medieval drop cap is the sort of detail that makes this small vignette a giant-sized success. 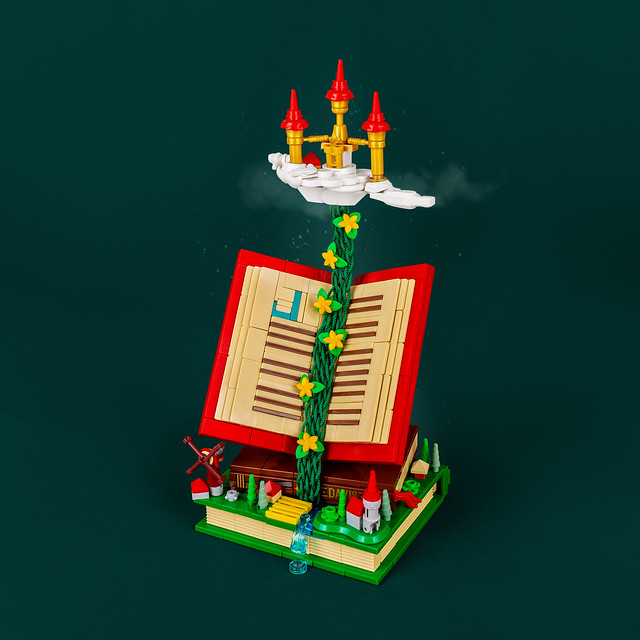 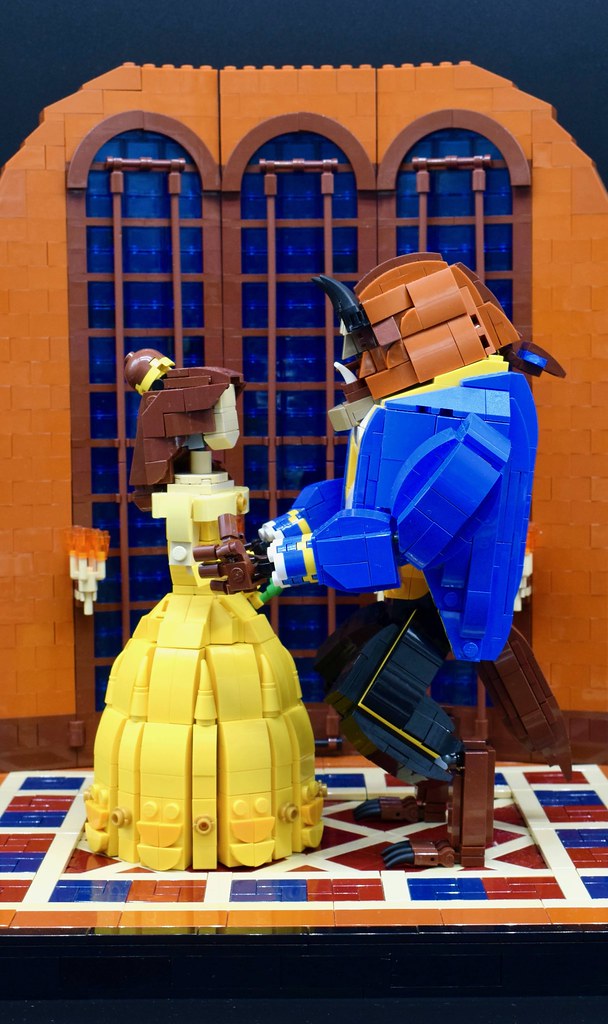 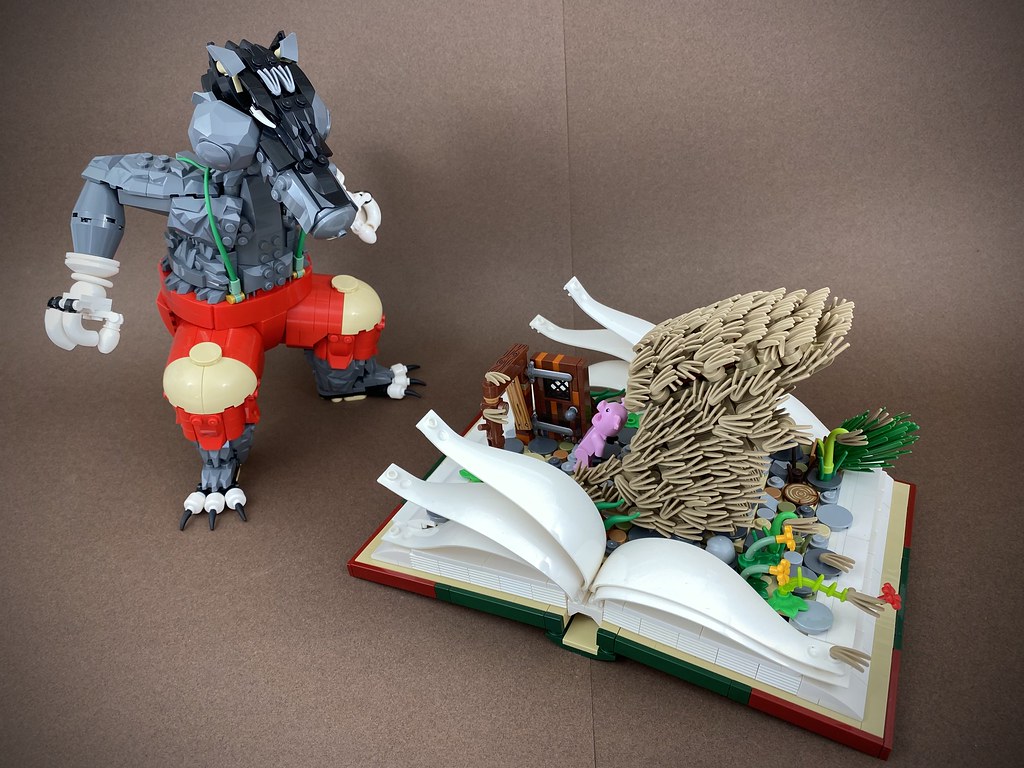 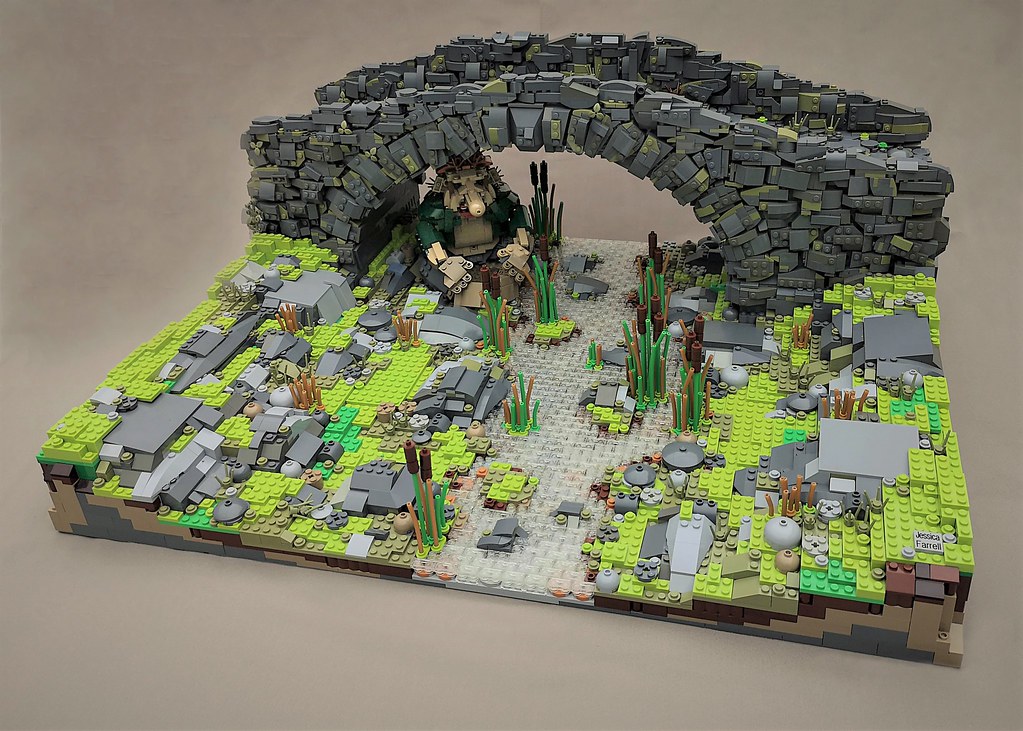 A classic fairy tale gets the LEGO treatment with this towering six foot tall brick-built minifigure-scale structure created by Martin Harris and inspired by the Disney film Tangled. Not only do we get the famous tower in this work, we also get a nice landscape – the forest in which Rapunzel was tucked away, complete with colorful trees and a nice riverbed utilizing many nature-inspired elements including flower pieces, plants, and tree-limb elements in varying colors. 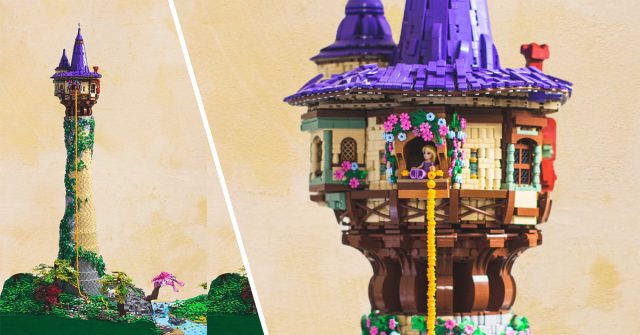 END_OF_DOCUMENT_TOKEN_TO_BE_REPLACED

We all remember the tale of Little Red Riding Hood, right? There’s a part where Little Red says to her wolf grandmother “my, what big eyes you have”. To which she retorts “the better to eat you with”. Wait, that didn’t turn out right. Anyway, the point is old people are scary! PaleoBricks mixes Bionicle with “regular” LEGO to build the wolf in grandma clothing quite nicely. The shawl is a great touch as well as the…um…grandma hat. Grandmas still wear those, right? The wolf’s expression looks like he really does want to eat you…with his eyes. It has been a while since I’ve read the story but I’m sure it also involved doilies and a dish of Werther’s Originals. And a ticking clock, a VCR, and one of those creepy pictures of Jesus that moves when you walk. Old people! Am I right? 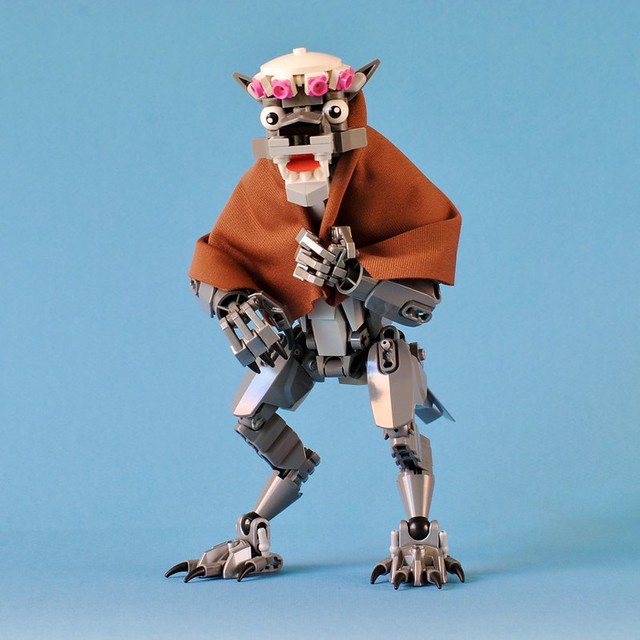 Sometimes the most effective LEGO creations are those that skillfully employ a sparse economy of parts. This creepy figure from Cezium does exactly that–building genuine character from a handful of pieces. Whilst this (blind?) old lady appears to be only gathering herbs, her eyeless visage and the skull-bearing staff create a real sense of unease. I suspect there’s nothing but a frame beneath the cloth habit, but it doesn’t matter, as what is visible is well done. The face (built from an upside down Raptor body no less!) and the skull are excellent, and the use of spider leg parts for the staff’s tips is perfect. Couple the model-building with atmospheric photography and you have a wonderfully unsettling LEGO creation. 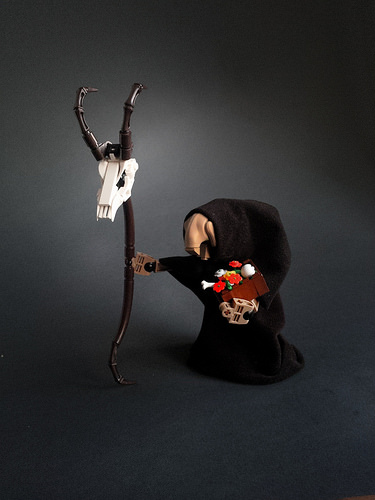