You may see a slew of exciting LEGO builds here on The Brothers Brick or around the interwebs having to do with Riot Fleas. What is a riot flea? We’re not quite sure. But this particular one built by Patrick Biggs has a New Wave 80’s vibe with his punk hairdo and keytar. He can surely play Relax by Frankie Goes to Hollywood, Frankenstein by Edgar Winter, or pretty much every Devo song ever. Patrick might be having the best week ever as we featured another one of his builds very recently. Check it out here as well as many of his other awesome builds in our archives. Other riot fleas have caught the attention of some of my colleagues so stay tuned to see more. 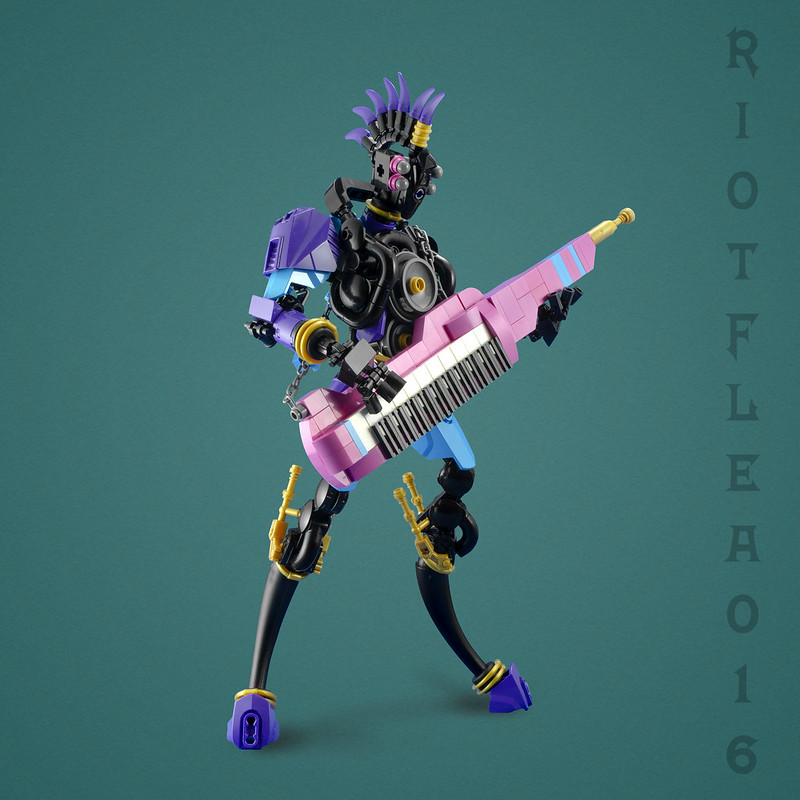 If you’ve been reading the Brothers Bricks for a few years, no doubt you’ll recognize the distinct style of LEGO characters created by Patrick Biggs. I always tend to come across them online in the same way: I’m browsing some social media platform and this fantastic LEGO model scrolls onto my screen. I think to myself, “this is amazing, who built it?” And then I read the caption and realize “Of course, it’s Patrick!” 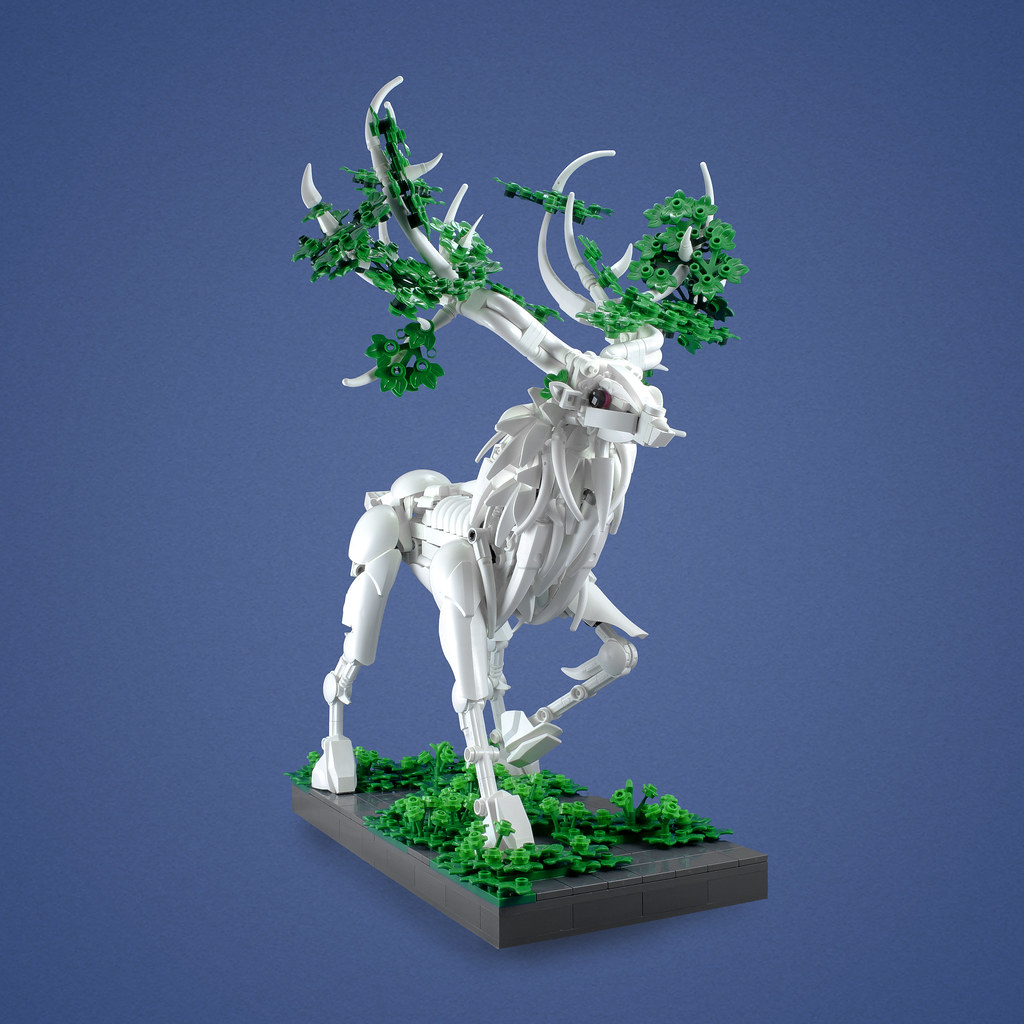 While I’m sure he agonizes over parts selection and placement, his models have an effortless look to them; the organic feel makes me believe they naturally grew, rather than being pieced together by an intelligent designer. With this Elk, there are so many things to love about how it’s sculpted, but my favourite is the legs. The 1×1 round plates stuck in the sides of the technic connectors – while not an uncommon technique – perfectly imitates how joints are thicker than other parts of the leg. And the armor plates on the front of the hooves so perfectly represents that layer of overhanging thick fur, really bringing this woodland creature to life. I’ve long been a fan of Patrick’s work as a LEGO artist and his ability to adeptly mix system and Bionicle elements, and this is one sculpture, in particular, I’d love to find a place for on my mantle.

If you find yourself in a magical land, watch where you step. Amongst the alluring, translucent blue flowers hides a curious creature. Exceptional LEGO builder, Patrick Biggs brings this little character to life in a captivating way. An expressive face paired with a dynamic pose and uniquely contrasted foliage demand a second look. You can build a pretty flower or a cute dragon, but telling a story with the two is what makes this build interesting. I’m particularly fond of the parts usage in the head shaping of the dragon, as well as the Bionicle head elements used for the petals. 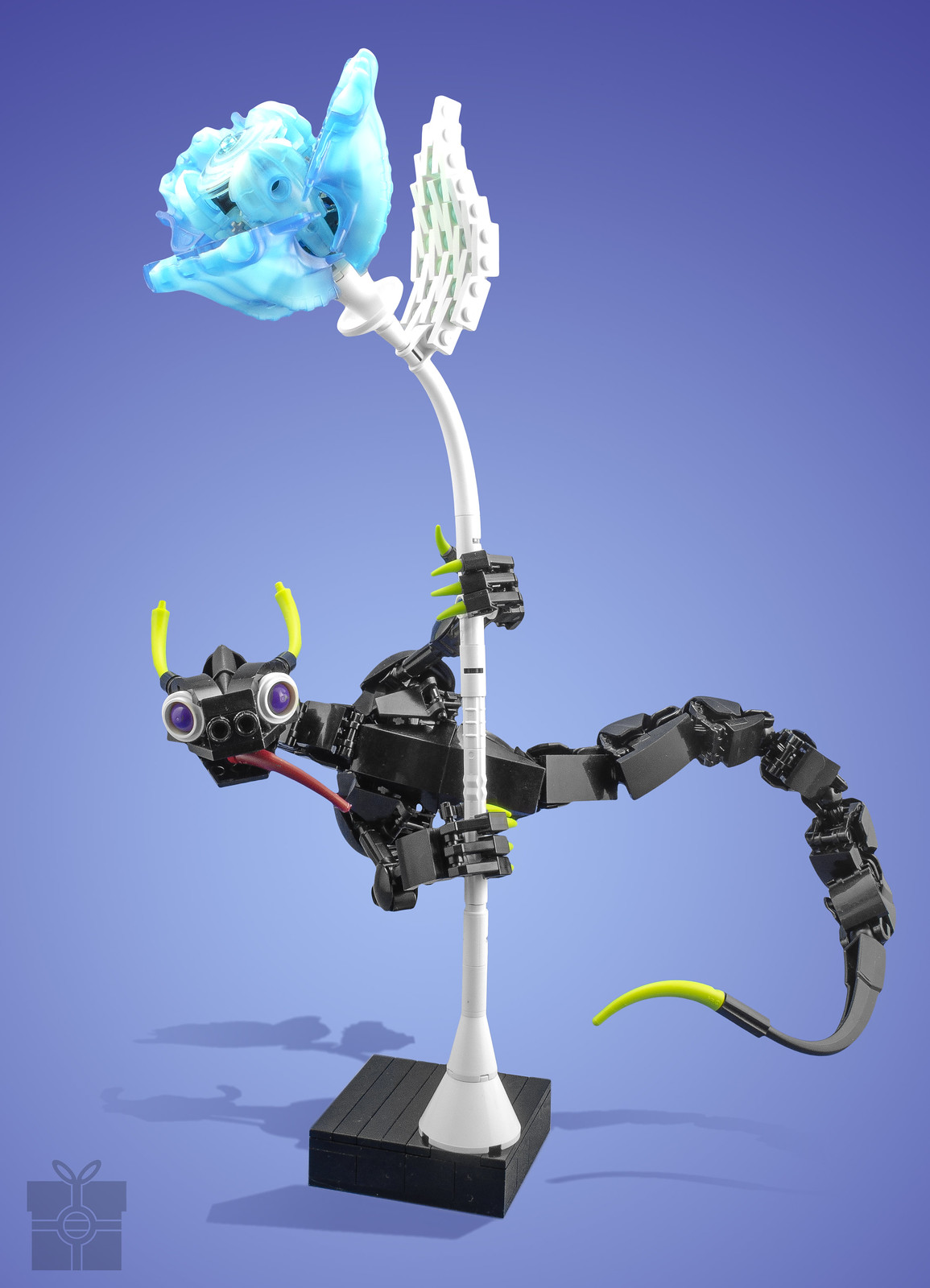 While you’re here, you can check out a few of Patrick’s other builds, as well as more dragons!

LEGO builder Patrick Biggs presents us with two demons; their names are Pain and Gain. No one knows which is which but they always work together. Their dumbells were cleverly constructed using tires and rims and their clenched teeth are emulated using bevel gears. These are popular demons that are frequently summoned by every meathead dropping their weights and exhaling the ancient spell: “No Pain, no Gain”. Incidentally, the same can be said after eating an entire gallon of ice cream in one sitting. Despite building the very personification of the “no pain, no gain” motto, Patrick tells us he didn’t spend his time wisely and had no winning plans for building this duo. That right there is why he wins the internet today. Here are several other instances where Patrick has totally won the internet. 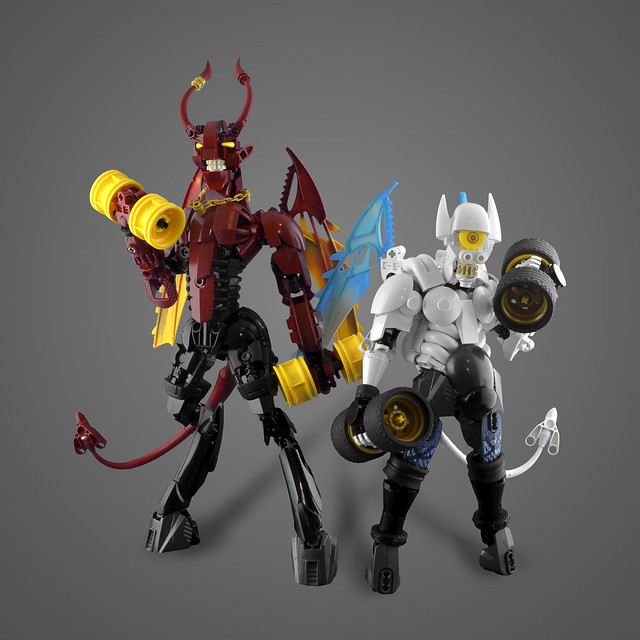 I don’t know much about Bionicle, but I know what I like and I really like this incredibly colorful LEGO figure by Patrick Biggs. Bionicle builders are a special breed. They have a mastery of the human figure and how to create realistically articulated joints. This is not a skill I possess myself so I am often in awe of these builders’ work. The story here is that the characters of Tahu and Ikir have united their powers to bring an end to Makuta’s plans for the Mask of Control. Yes, Bionicle lore is incredibly deep.

The first thing you see when you view this figure is the fantastic color scheme. The limited palette of red, gold, and dark azure is quite striking and draws you in immediately. Interestingly the figure is somehow both bulky and yet extremely elegant at the same time. The wings are stunning and have a pseudo-Art Deco/Egyptian feel to them. The pose is full of action and the downward-pointing swords create a nice balance to the upward-pointing wings. Speaking of balance, the symmetry at work here is terrific and the raised knee adds that perfect bit of asymmetry to keep it from becoming too much of the same thing. It’s exceptionally well done and transcends the Bionicle form to give us something you might see hanging in an art gallery. 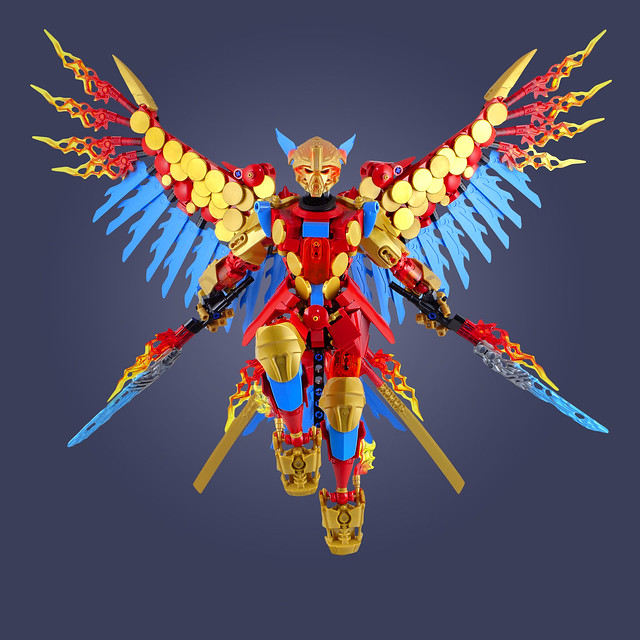 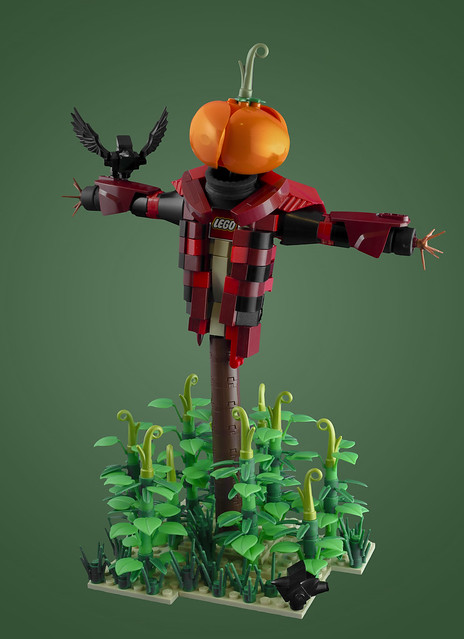 In a world where human influence seems more and more destructive, it can sometimes feel like there is less hope for life every passing day. Patrick Biggs tackles this topic with an expressive character that seems to embody wild plant life. Now, we should not oversimplify the ecological crisis to just deforestation, but as a symbol this creation is quite powerful. It may be a touch ironic to talk about such problems through plastic bricks, but if it makes just one person consider their carbon or plastic footprint, the world is better for it. 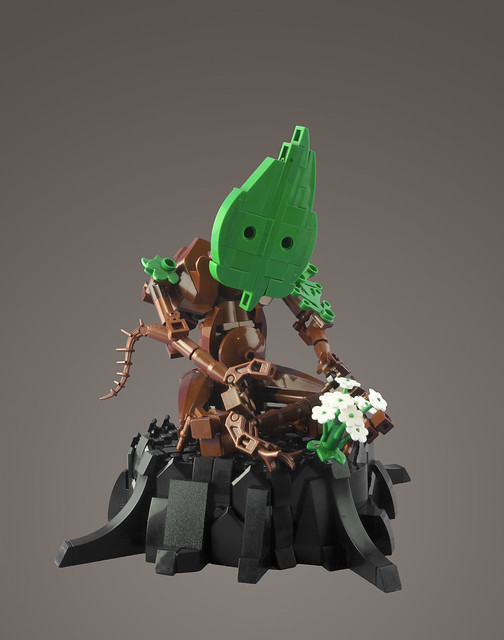 The character’s leafy face has a perfect shape and an expression achieved by two simple pin holes. The body has much more detail than I would expect from brown. But the character would not have the impact it does without the burnt stump it is presented on, as well as the flowers sprouting from said stump under the gardener’s influence.

Builder Patrick Biggs strikes again with another super-technical creation: “The Brothers.” This two-headed, dual-tailed dragon is enough to strike even the bravest of knights full of fear. The way Patrick designed the dragon is equally awe-inspiring. 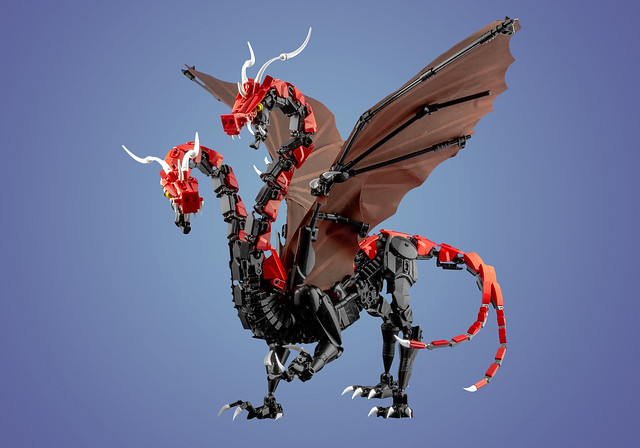 I find the way the builder united both Bionicle-esque pieces with normal studded parts on the legs and tail of the dragon to be truly innovative. Additionally, the crazy amount of joints across the entire dragon allow for an large amount of potential poses, allowing for stories to take flight. I could easily see one of the heads breathing fire across a village while the other roars, announcing doom across the land.

Constraction figures have been a source of contention among LEGO fans for years, starting with the launch of Bionicle in 2000. Are they really LEGO? Are they just a subset of Technic? Or are they something else entirely? Obviously, the correct answer is yes (but to which question?), and they are a gift that keeps on giving with their many unique and surprisingly versatile pieces, not to mention the cult following they acquired among certain parts of the fan community that routinely churn out awesome builds. Builder Patrick Biggs is one such fan, if his photostream is anything to go by. His latest creation blends System, Technic, and Constraction parts together so seamlessly and organically as to lay to rest the earlier questions. It is all LEGO. And speaking of laying to rest, the centaur-like figure, capped by a deer skull, is a spirit that cares for broken, lost, and lonely souls, finally shepherding them home. I’m not sure that this spirit is one that I would like to see were I broken, lost, and alone, but perhaps some people would find it comforting. 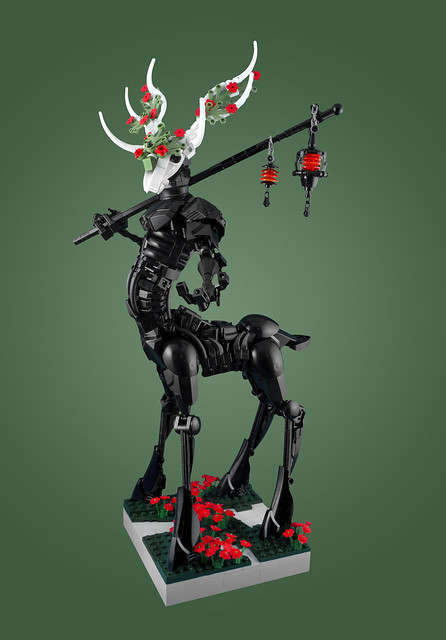 There are many great parts usages here, from the torso armor used for the lower abdomen to the Hero Factory blades used as calves on each of the four legs. But far and away the best, and even inspired use, is the shin guards as hooves and lower legs. It looks the part perfectly and almost seems made for the job. I must point out, too, the beautiful color arrangement and work in contrasts; the black body with the white deer skull and the green plants with the red flowers, on top and bottom, make the image pop. Everything is balanced, just right for a spirit to lead your soul home, I suppose. It is beckoning. Will you follow?

If you visit Portland, Oregon you might be lucky enough to catch a glimpse of the Unipiper, a unicycling, bagpipe-playing, costume-wearing street performer. He achieved fame for riding around as Darth Vader while playing a rendition of the Imperial March on bagpipes. Patrick Biggs has captured the Unipiper in all his quirky glory, right down to the flames shooting out of the bagpipes. Patrick claims this was a last minute build, but his model looks both well-planned and well-executed. 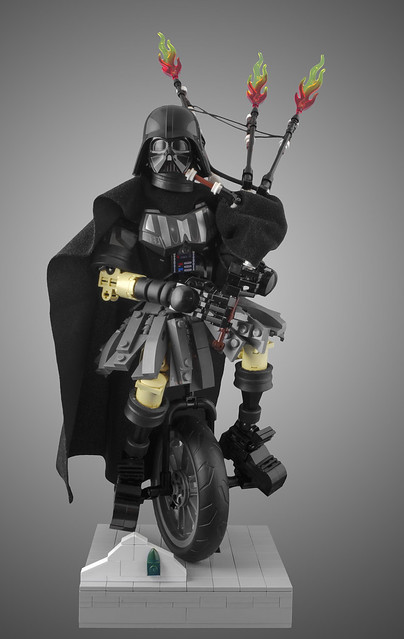 What would the Headless Horseman look like in 2018? Patrick Biggs is re-imagining the famous character from The Legend of Sleepy Hollow, and now the horse is gone, replaced by an awesome bike inspired by Mel Finelli’s works. Instead of a pair of leather boots, here are sneakers, with a design borrowed from Luke Staten. But it’s the posture and the motion of the figure that makes everything work together. Even though we don’t see the face, no doubt, this guy is having the time of his life this Halloween! 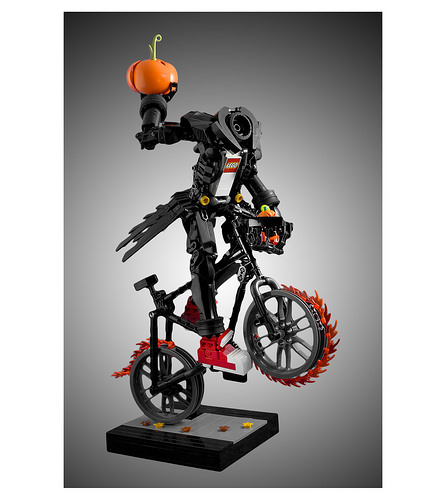