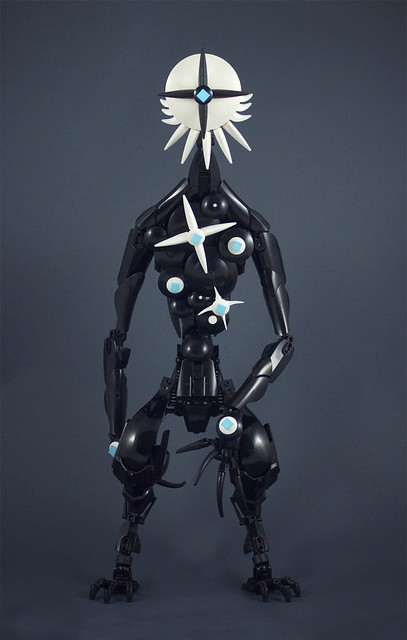 Beware shark fin soup enthusiasts. It’s not so much my thing but in China shark fin soup is considered a delicacy served at traditional weddings and banquets.The practice has been condemned by the Humane Society International as millions of sharks are killed each year for their fins and it sort of upsets the order and sustainability of other things in the ocean. Enter James Zhan and his toothy Nightmare Amalgam-Z. This creature can walk up on land, politely tap you on the shoulder with this Bionicle part while you’re dining, then maybe proceed to chomp on your face. You don’t want that, do you? We all gotta eat, I know, but driving a certain species to near extinction isn’t cool. So let’s be cool, otherwise you get this guy and we’ve already established what he does. So are we cool? Good! 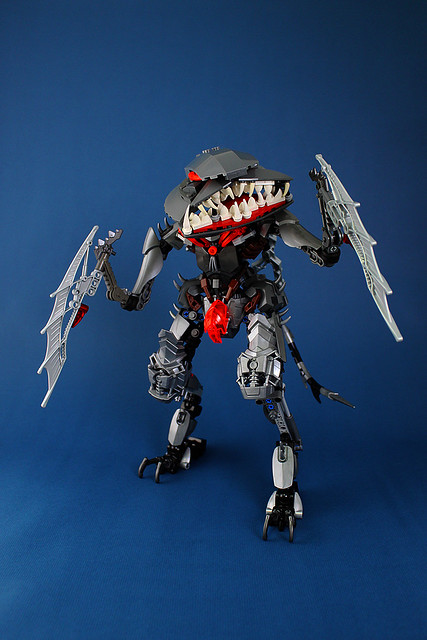 The 2019 Bionicle-building challenge Biocup is on and LEGO Bionicle enthusiast chubbybots has jumped into the ring swinging. The first round’s theme is scary monsters, which I definitely think this wendigo fits into. Intimidation and furious brutality are the words that spring to mind. The Hero Factory Hand Armor as the top of its head was an excellent choice that brings those stark white teeth to the foreground on that monstrous underbite. Those rubber tyres on the arms and ankles remind me of the tufts of hair on a minotaur. I wonder it played some role as a muse while chubbybots started to piece this guy together? My favourite piece use on this terrifying vision would have to be a tie between the four eyes made from small red lever bases and the shadow trap, creating what looks like the end of a gnarly set of gauntlets. 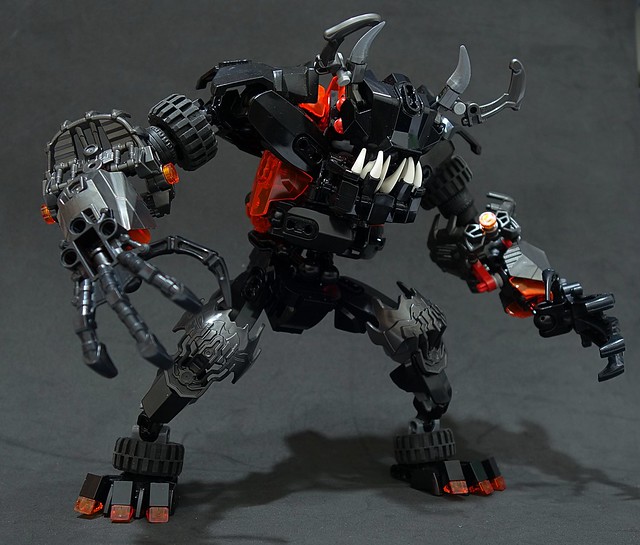 Be sure to stop by and check out some of the other contenders in this year’s Biocup!

Biocup 2019 has kicked off this year with a preliminary theme of all things scary. Biocup is a fan friendly organised event where builders challenge themselves to use Lego Technic, Bionicle, CCBS (Creature and Character Building Systems) and Constraction with having little or no traditional LEGO System bricks involved. This particular round is themed on creations built on things that scare or put fear into your heart or send chills down your spine. Builder [VB]’s creation of a heart nailed right through is something to be afraid of. As much as the heart is one of the strongest muscle in the body, it’s also the one that can be the weakest or darkest in soul. 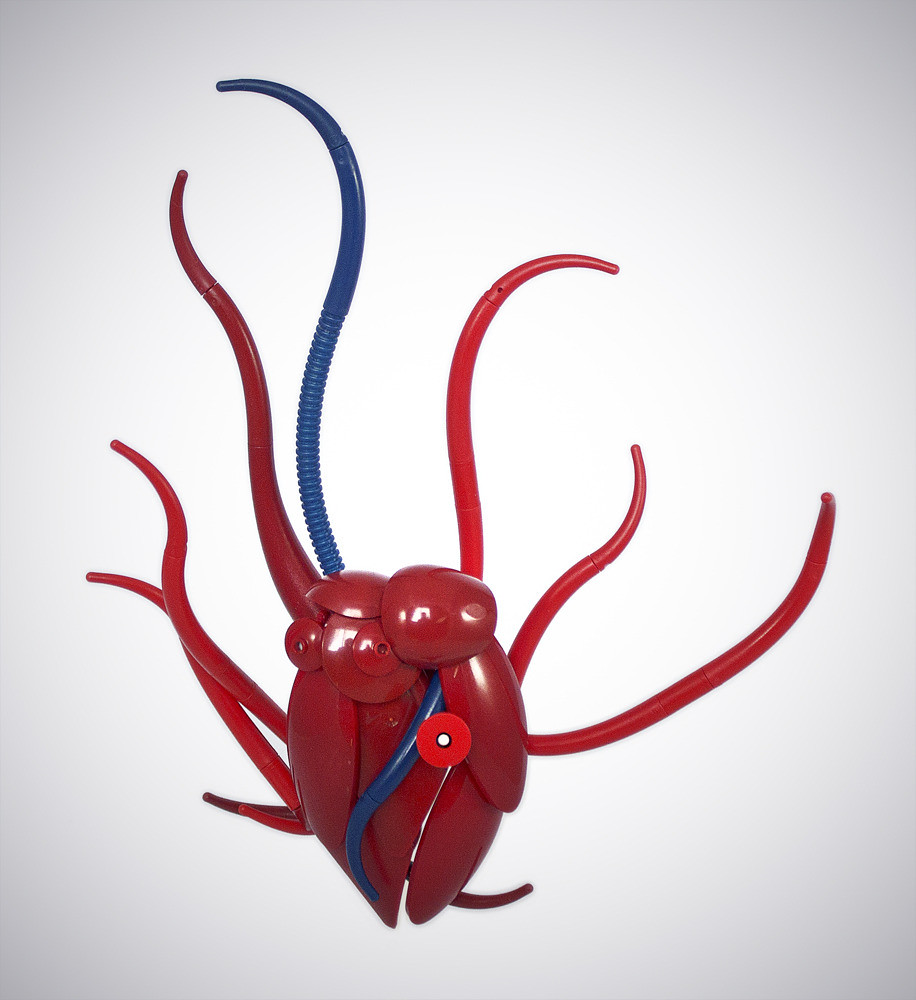 The LEGO Bionicle line may have ended in 2016, but that hasn’t stopped fans from expanding on the theme. Case in point: Alex Mertens brings us a sleek version of the Rahi beast Muaka, inspired by a deep cut of Bionicle lore. I’m a fan of the smooth curves that give this model a sense of feline grace. The splash of color from the orange hose and lime green claws adds visual interest against the blue of the Hero Factory armor and Bionicle shoulder armor plating. 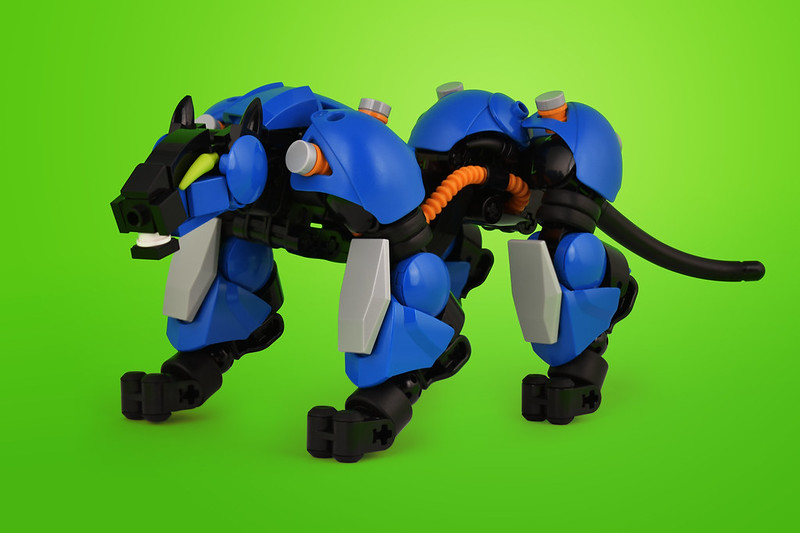 Speaking of that armor, we recently featured another re-imagining of Muaka that kept the yellow highlights from the Muaka & Kane-Ra set from 2001. Alex has gone one step further, taking the blue color from a Bone-Heads of Voodoo Island prototype that likely lead to Muaka! This early prototype can be seen in Christian Faber’s demo footage. 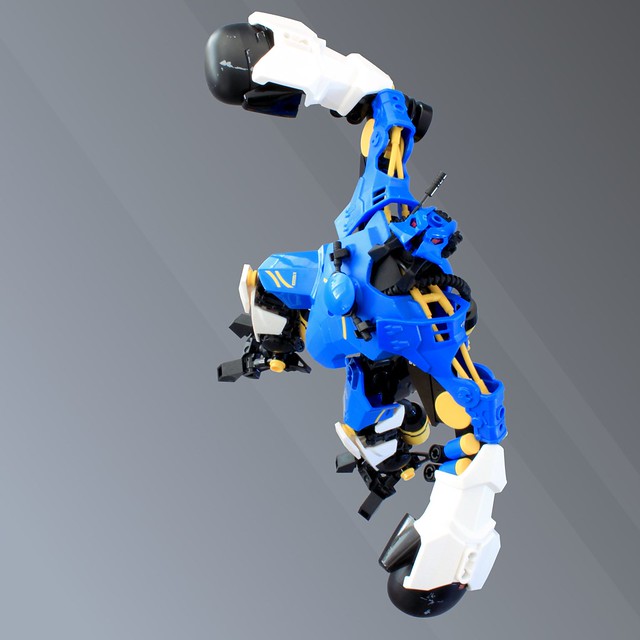 We know and love Anthony Wilson for his charismatic and vibrant brick-built characters. Some of them are utterly cute, while others are inspired by some very challenging video games. But this time Anthony draws inspiration from the very first generation of LEGO Bionicle sets, and in this particular case — from 8535 Lewa. His lumberjack Lewa scene is a stunning combination of smart building solutions and tiny references. The highlight of the scene is, of course, Lewa’s plaid shirt, which suits the hero surprisingly well! But can you spy the rest of symbols and smart use of pieces? 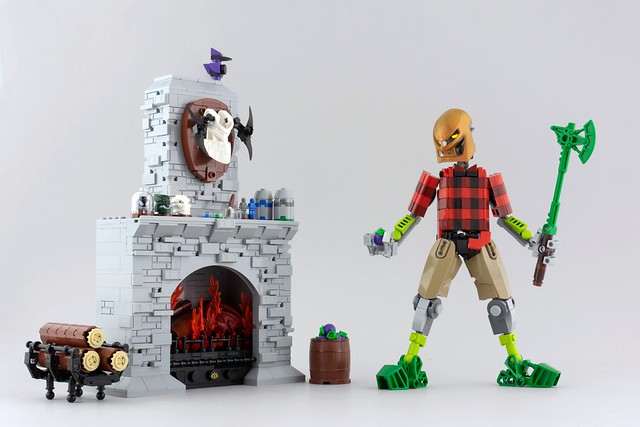 It’s amazing what a talented LEGO builder can achieve when they step outside their comfort zone. Andreas Lenander was inspired to build something “Bionicle-ish” and I think he nailed it. The contrast in building styles between the complex dragon and the studs-up base is the perfect way to make the dragon stand out. 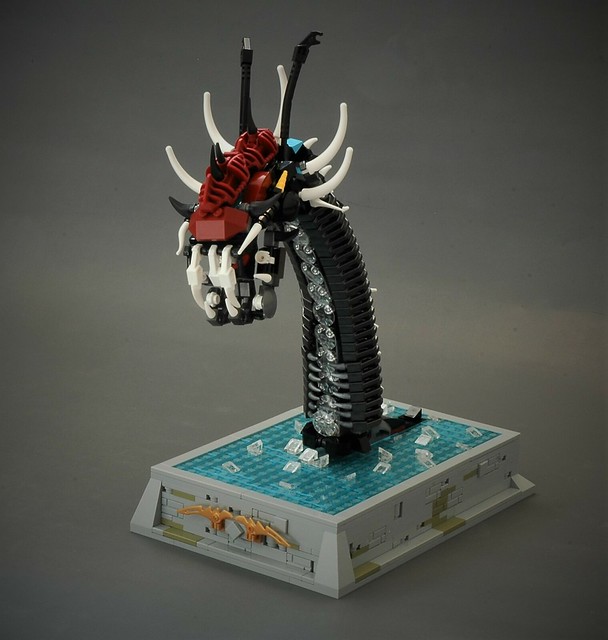 The dragon’s neck is particularly well done, being constructed mainly out of robot arms to resemble scales. Robot arms are actually used throughout, also being used for teeth and the tips of the black horns. The Piraka leg pieces are the ideal choice for the ridge of the dragon’s face: they give it that undeniably rigid-skinned lacertilian look. 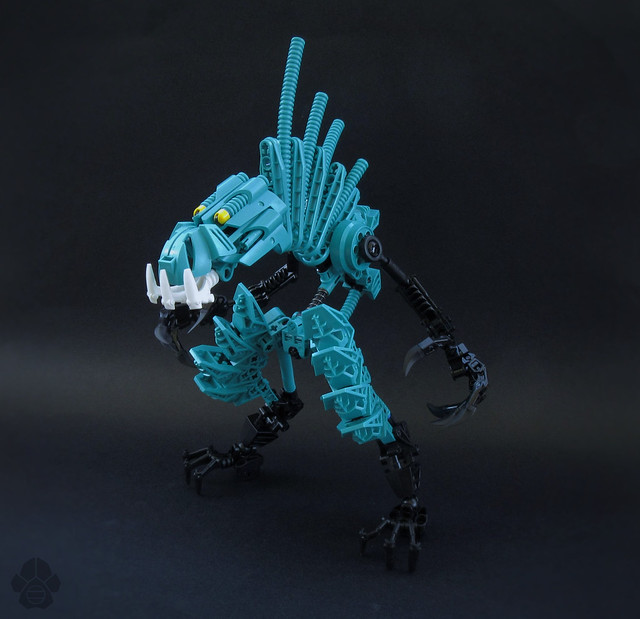 The tables have been turned, and our alien overlords are getting a taste of their own thorax salve.
This wonderfully detailed insect prisoner by Poor Disadvantaged is more than just a great LEGO creation. It is part of a collaborative project to re-imagine early Bionicle-themed sets with a fresh perspective. The chunky wheel part makes a perfectly unpleasant shackle. Another awesome detail is the multiple robot arms used to create a very detailed mouth complete with feeding mandibles. 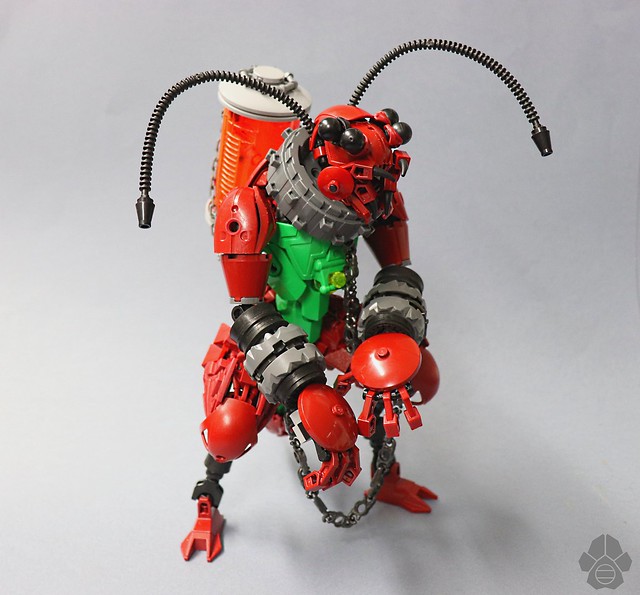 Inside-out car tires and those rocky parts used for the manacles are another fun detail. If the prisoner didn’t look so deadly I might even feel sorry for him.

A small group of Bionicle builders have been reworking sets and themes from the early years of the Bionicle theme. They have just recently released pictures of another collaboration in my favourite Bionicle subtheme – Rahi (basically “animals”) from 2001. This build is Muaka from the 8538-1 Muaka & Kane-Ra set, reimagined by Red. 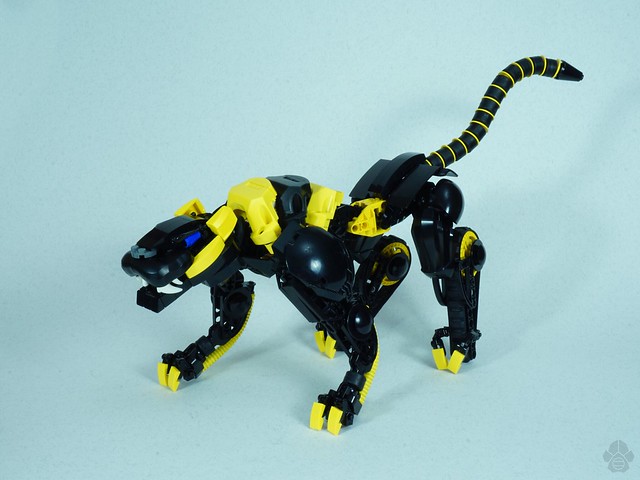 There is so much to love in the set’s reinterpretation. The builder stays faithful to the original with hoses on front legs and treads on the hind ones, but integrates them perfectly to achieve a smooth flow. And speaking of smooth flow, the tail is quite organic, made out of a 3mm flex tube element going through yellow 2×2 dish pieces and small tyres. My favourite part is the use of giant arms on the mouth, giving it the feline look that the original set lacked (which always looked more like two T-rexes…).