In 5th grade, my classmates and I had the option to pick up an instrument and join the school band. I desperately wanted to play the drums but my parents couldn’t stand the thought. My second choice was the saxophone, simply because it looked rad as heck. All those pearl and gold keys! Shiny, soulful, sultry: the royalty of reed instruments… This little sax, built by musician and LEGO artist PaulvilleMOCs , brings me back to those days. It truly is unique – especially this tribute, with its banana gooseneck and other neat elements such as binoculars and a roller skate for sections of the body/keys. 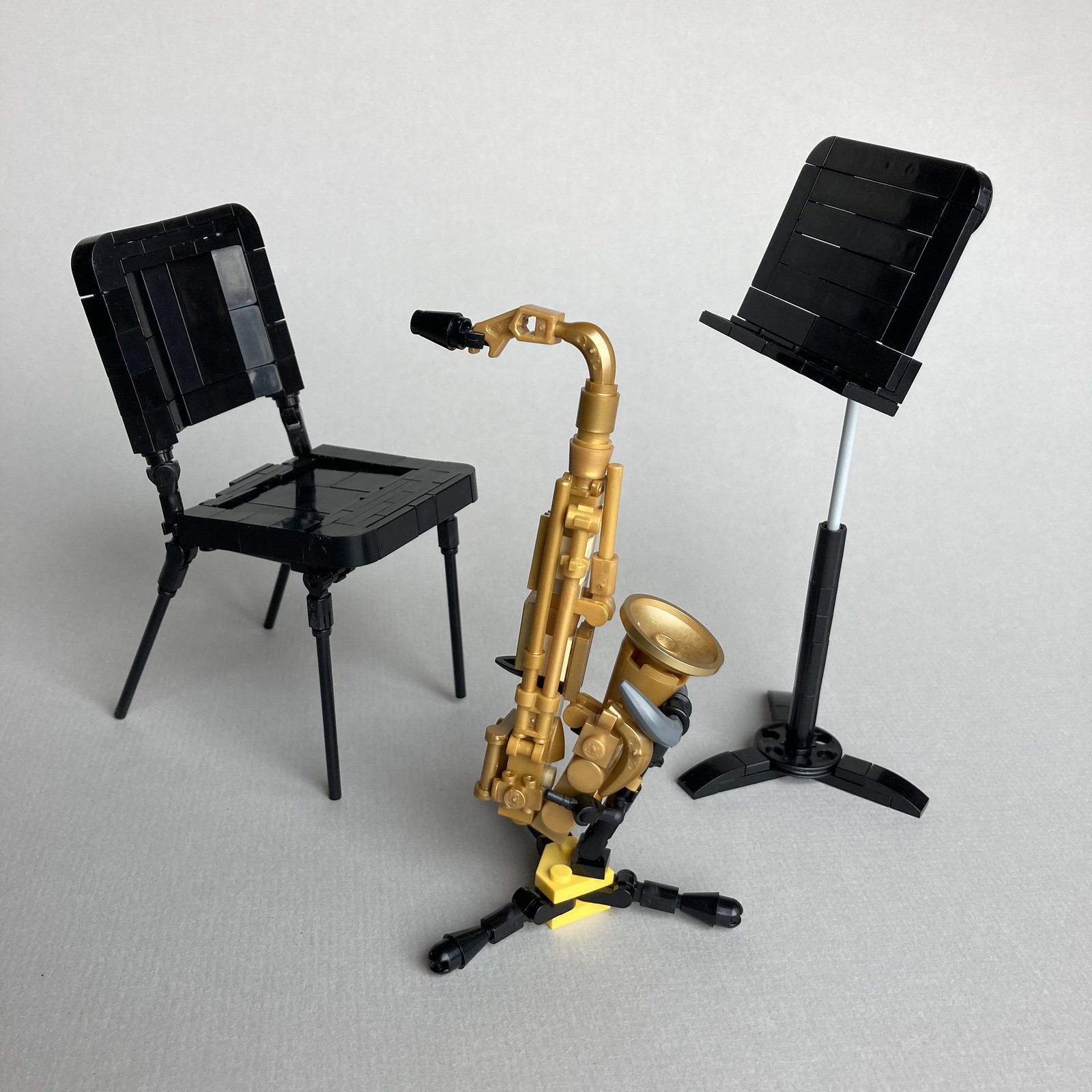 I’m envious of Paul and his saxophone, and I wonder if he plays as beautifully as he builds. Back then, my mom took me to the music store where I was already taking piano lessons, and upon hearing the “member discounted” price of a sax, almost had a heart attack. I ended up with a family friend’s clarinet – which felt like a small step up from the boring 4th-grade recorder. But as a dutiful band-nerd, I kept with it until I switched to its cooler cousin, the bass clarinet, in high school. One of a kind in a symphonic band of 60+. Total rockstar… And I could barely remember a lick of it now. 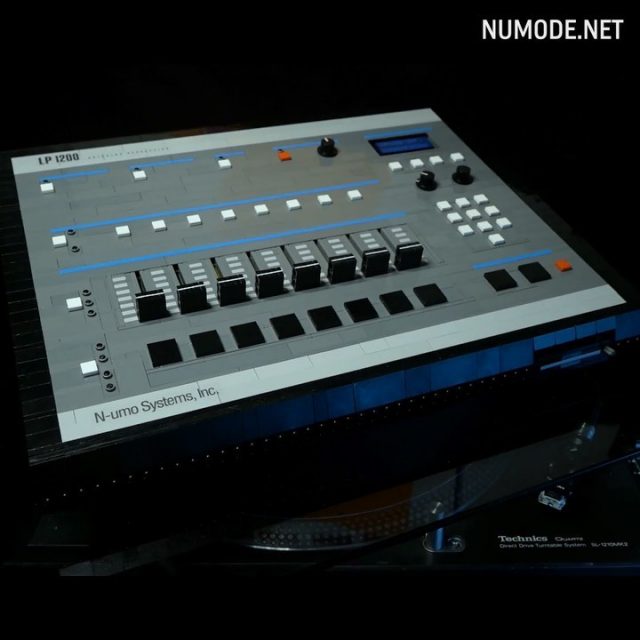 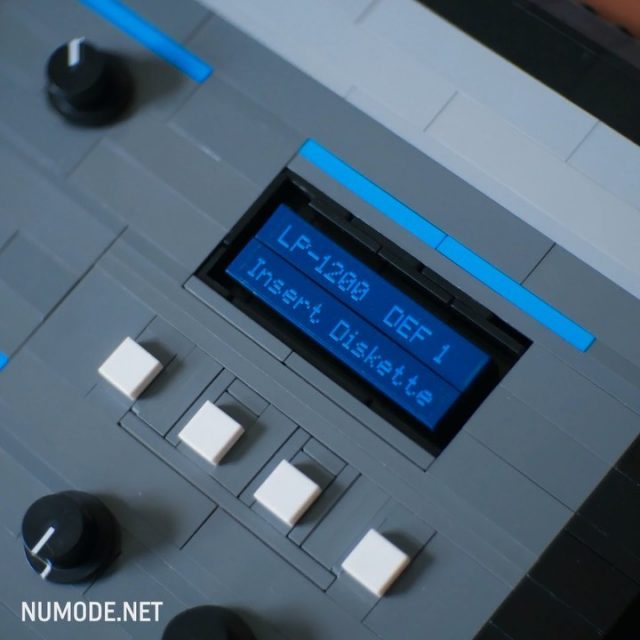 Last weekend, Timofey Tkachev went to see his babushka. There is no place like a countryside cottage to spend long summer evenings, sipping hot tea, and enjoying a slice of a berry pie. But one doesn’t simply go to babushka empty-handed. Being a very talented LEGO builder, Timofey designed something exceptional: a full-sized replica of a traditional balalaika, a Russian stringed instrument. The brick-built design looks wonderful in its simplicity. The iconic triangular shape became possible thanks to the clever use of regular slope pieces. And thanks to the hues of LEGO colors, this balalaika looks almost exactly like a real one. 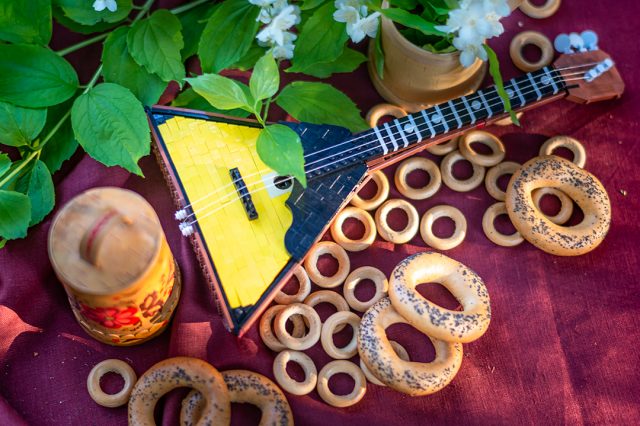 Kudos to Vera Senyuta for joining the tea party and taking her camera with her. We always love to see custom LEGO creations shot in beautiful settings. For a musical instrument like this one, there is no better background than a couple of birches in the evening sun. 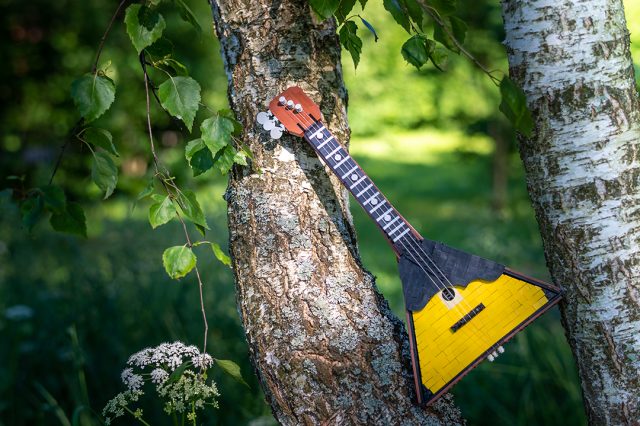 Back in January, we featured a tiny LEGO upright piano with instructions, built by Tiago Catarino. Now he brings us another mini masterpiece: a baby grand! While they’re both adorable, I have to say, this one is my favorite. He captures the shape perfectly. 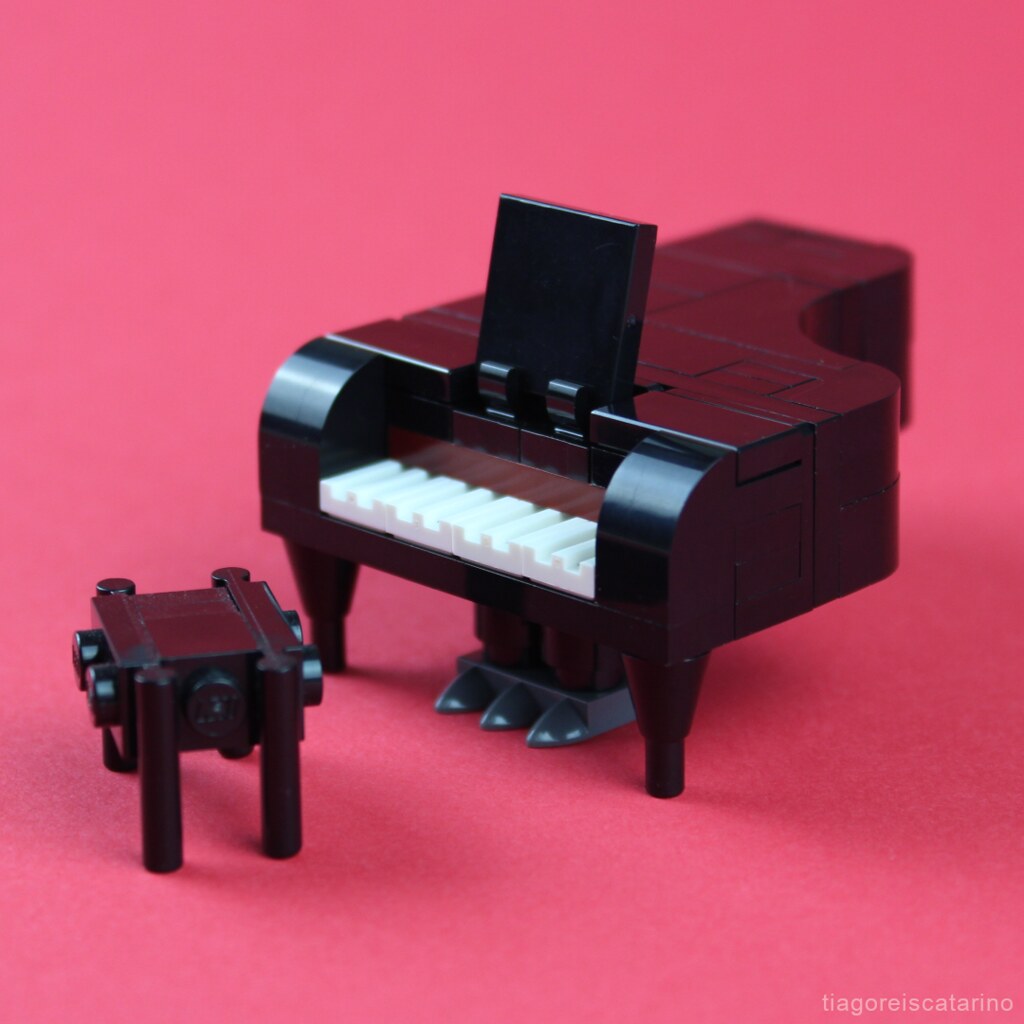 END_OF_DOCUMENT_TOKEN_TO_BE_REPLACED

Each year, talented LEGO builder City Son reveals a new focal creation. This time he was inspired by something special to so many: music. Not just music, but the inherent emotional beauty of it. It’s something that many can relate to. Personally, ever since I was a child, my dad would play all kinds of different music and quiz me on the titles and artists until I had them memorized. As I grew, I learned to play a few different instruments, and when I hit high school, the saying, “music breathes the words we cannot speak,” was my mantra. Indeed, it got me through tough times, and I still cherish it every day. And it’s true; music does speak. It speaks a language so powerful that it’s universal across all ages and races, no matter their tastes or connection to it. This colorful piece embodies the emotion of music. The dimension, liveliness and expertly crafted instruments speak for themselves. But I am most impressed with the expression of pure bliss upon the face of the headphone-clad woman. It takes a truly brilliant builder to bring LEGO to life in this way, and he couldn’t have done it better. 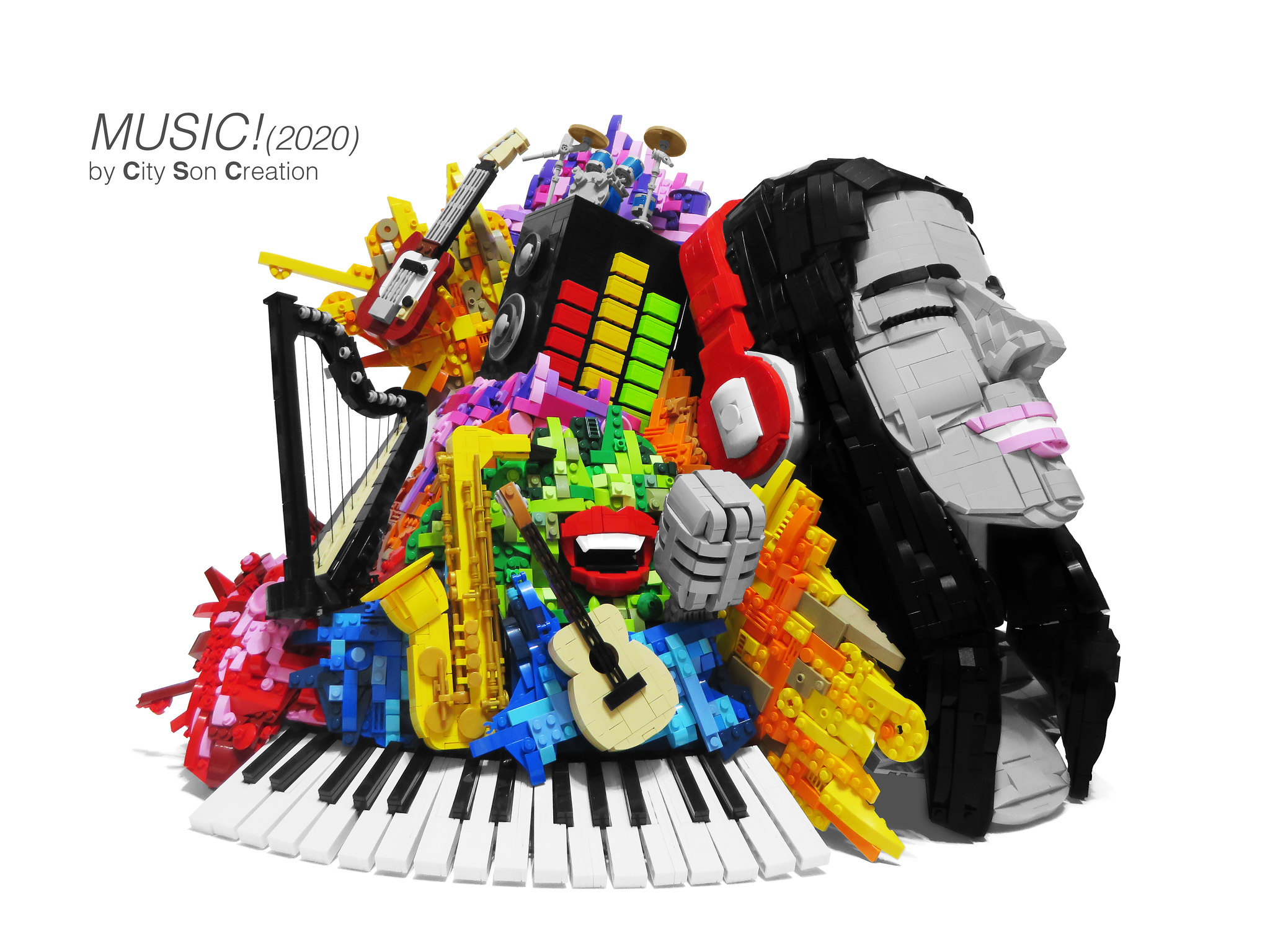 If you’re on a music kick, take a look at our music archive. You can also check out City Son’s animal inspired creation from last year.

Already built an awesome LEGO pool table with yesterday’s instructions? If you are now looking for the next perfect addition to your LEGO pool hall model, or just want to add a touch of class to any interior scene, why not build this adorable upright piano along with Tiago Catarino? 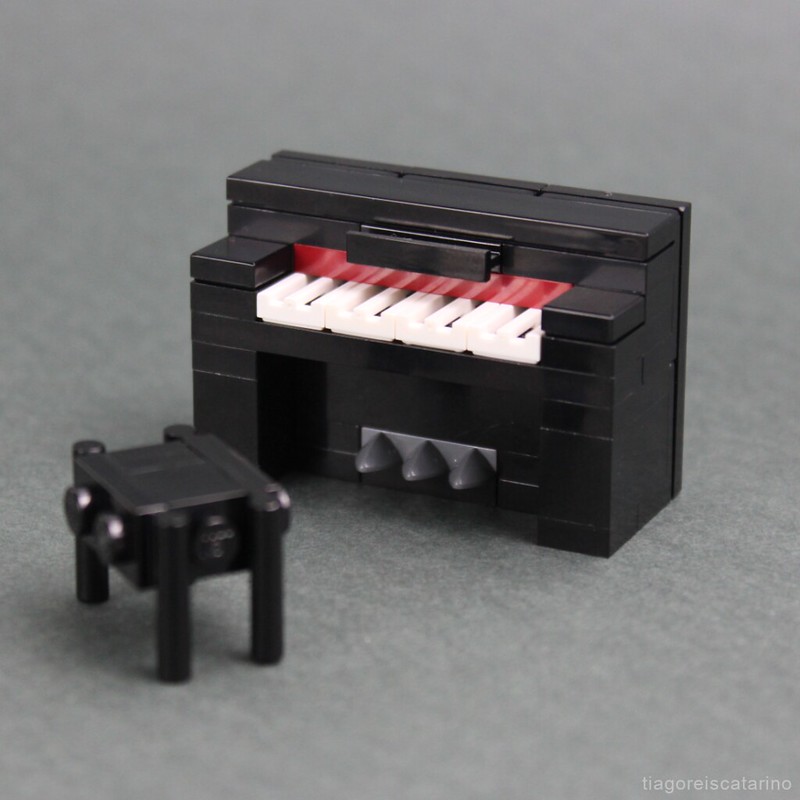 Watch the video instructions to find out how to build your own.

While all the things that LEGO builders can create from their own imagination are amazing, building real-world objects can be rewarding in their own way, especially if you have a personal passion about the object you are building. Just one look at this sleek piano by delayice and it’s clear to see that the builder is paying close attention to details, from the gold on the feet of the piano and the bench to a very well proportioned number of white and black keys. And the gentle curves of the body and the lid are masterfully done. 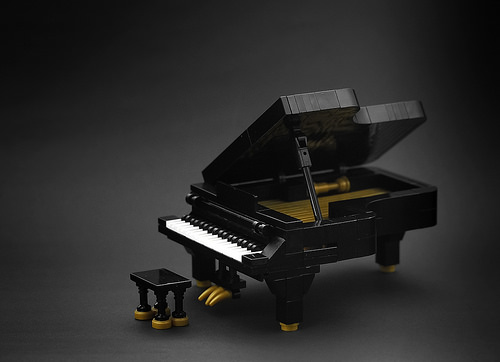 Are you ready to rock? That’s what David Liu is asking with his latest LEGO creation — a selection of excellent brick-built musical instruments. There’s a classic Flying-V electric guitar and amp, a synth, a full drum kit, and an acoustic guitar. Now the band might be lacking a little in the bass department, but this is still an impressive line-up of gear. The guitars show nice shaping for the scale employed, and the keyboard is packed with details — don’t miss those black keys, raised and correctly spaced! 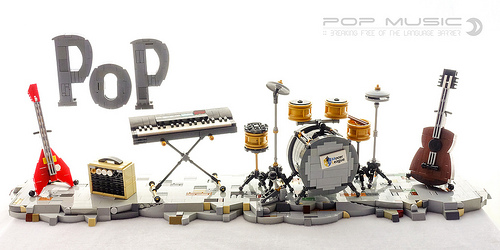 The full line-up of instruments is great, but the highlight for me is that drum kit. Worthy of a closer look, especially the sweet parts use for the tripods and drum kit legs… 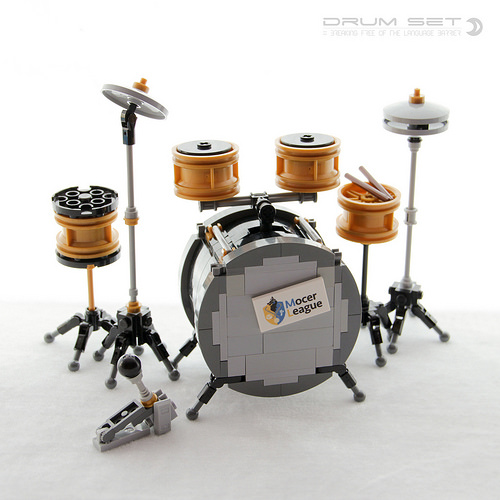 LEGO builder bbchai brings a bit of old-school class to the scene, to the tune of a lovely violin and bow paired with a bust of the famous musician Mozart. This wonderful composition would look great on any music lover’s desk. The clips which make up the embroidery on Mozart’s jacket are a superbly simple technique that works perfectly, and the lightsaber handles for the wig’s white curls are similarly great. 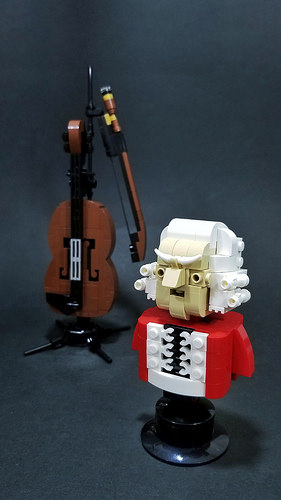 The violin and bow are masterpieces as well, with the plate 1×2 with handle making for excellent F-holes. Of course, they have a nifty little stand to hold them with the care they deserve. 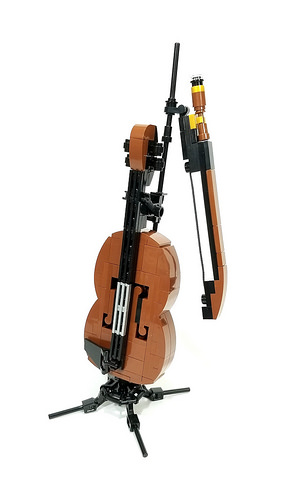 We recently highlighted a selection of LEGO audio gear, including a Moog Sub Phatty. Quy’s LEGO version of this synthesizer is a really fantastic creation and proved very popular. Quy Chau has kindly shared breakdown instructions for his build, should you wish to build and play your own LEGO Moog Sub Phatty. 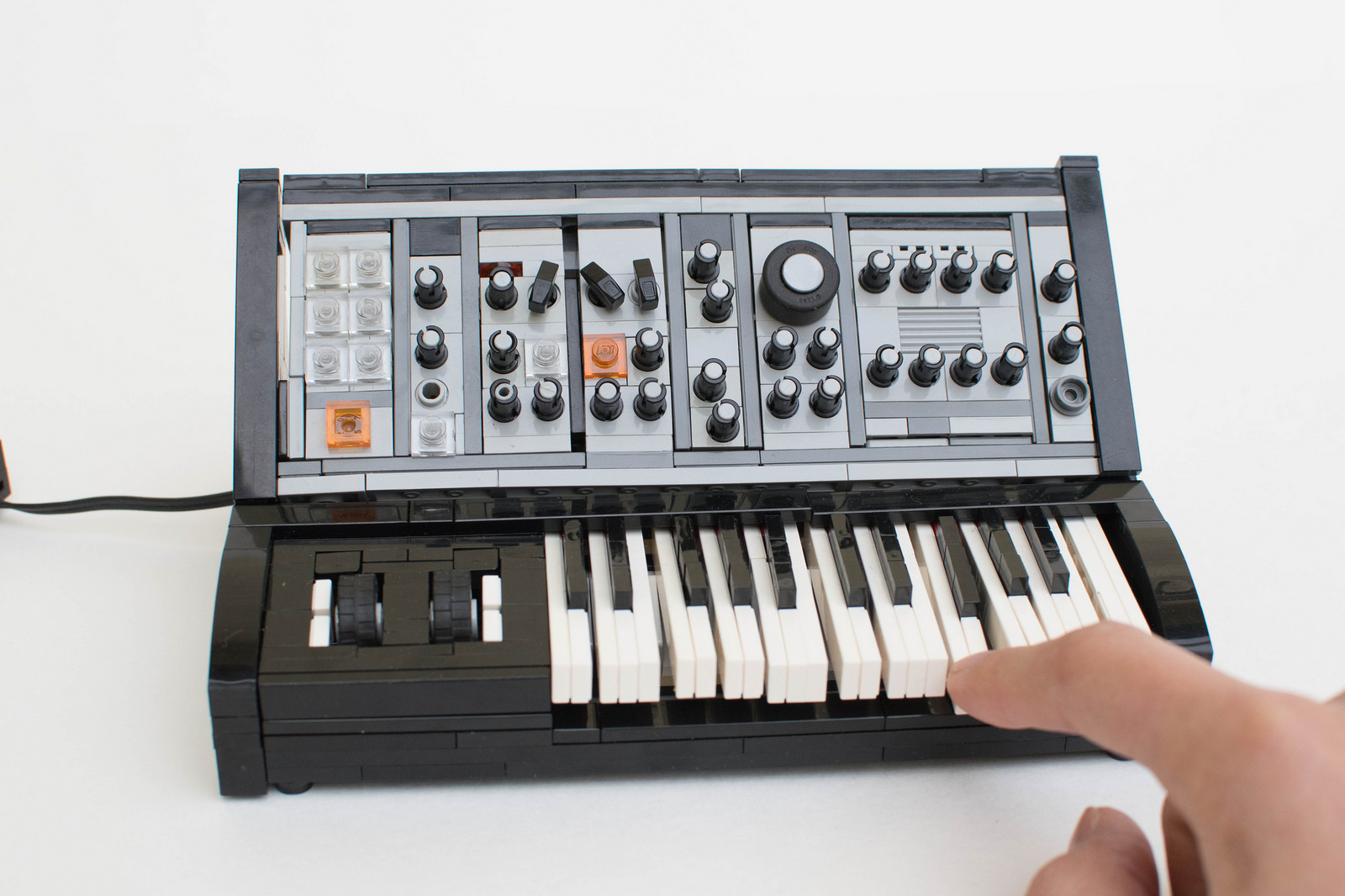 END_OF_DOCUMENT_TOKEN_TO_BE_REPLACED

Feelings can often be difficult to share, but thankfully, music can do it for us. The perfect song can tell someone everything you want to say but don’t know how. It can take us back instantly to points in our life, reminding us of those we love. James Zhan has built this wonderful gramophone, with beautiful gilded details. Atop the record is Minnie, with Mickey playing the record.

To me, it tells me the song reminds him of her, and there’s something very sweet in that message. 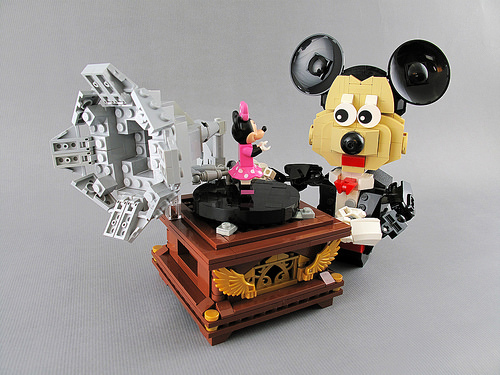 The record spins, too! 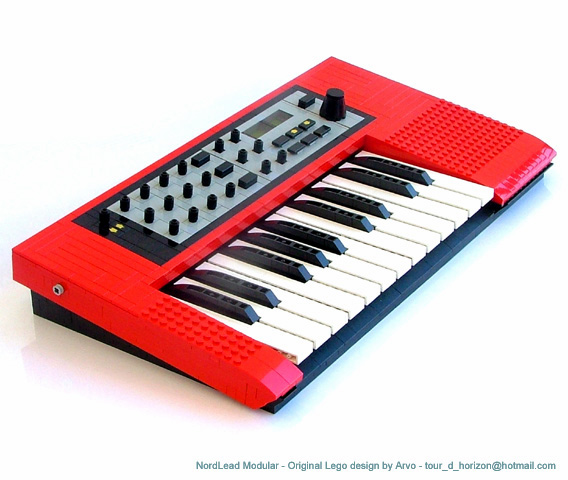