I’ve been a little busy recently, but when I saw this LEGO angel from Gauntlet. Out beyond that, the wings really help lift this design, and I appreciate the parts used in the wing construction here. They add a significant amount of detail, and are a worthy inclusion by Jerac. Ready to face any evil, this angel wields a crystal sword and I love seeing transparent pieces being utilised in varied and different ways. What gripped me in this build is how the hood completely hides the face, adding an otherwise haunting undertone to the build, and creating a little mystery in this impressive sculpture. 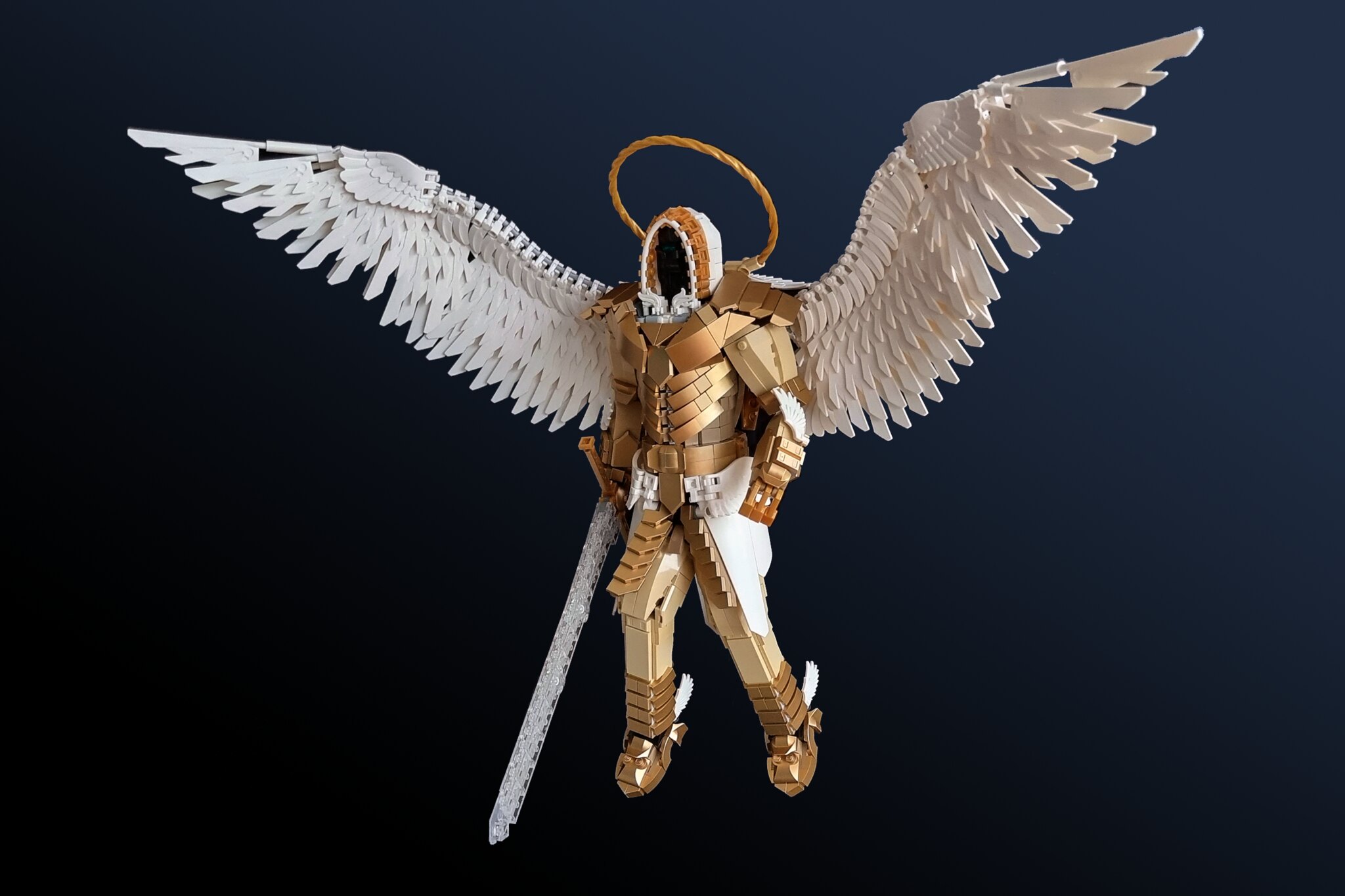 Descending from the heavens comes this holy mech, created by Ronin Bricks. The small machine features sharp pointed wings and wields a spear with a circular quarter piece representing its curved blade. The head is formed of a rounded plate with a small tile representing the visor of the robot. The use of bars and clips provides the mech with a fantastic range of articulation. Nozzle pieces have been cleverly used for the feet, providing the mech with the ability to bend its feet. The build comes complete with a stand, perfect for posing this creation in some dramatic aerial poses. 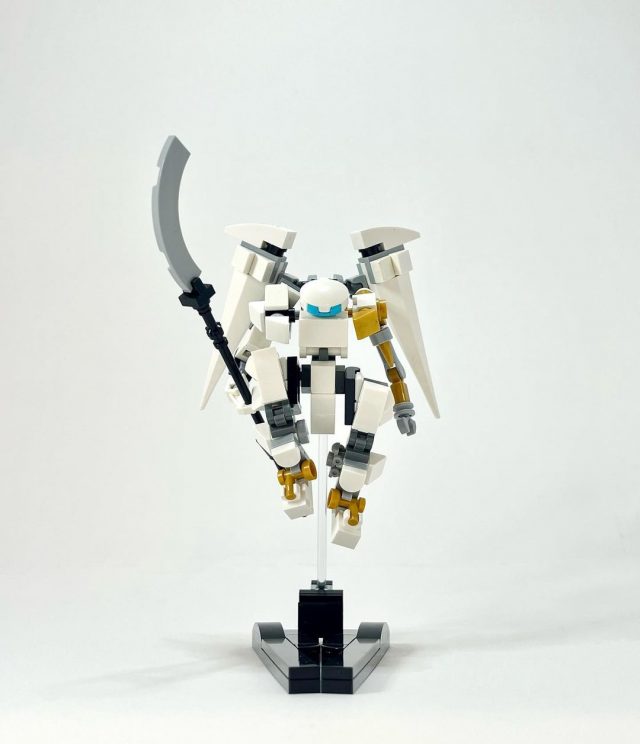 Things can look pretty bleak, sometimes. So with that in mind, here is a LEGO guardian angel built by Kristel Whitaker to help you through some tough times. I like the golden staff, flowing wings and her serene expression has such a calming effect. Whatever it is you’re going through right now, allow this angel to see you through it to better times. Remember, this too shall pass. 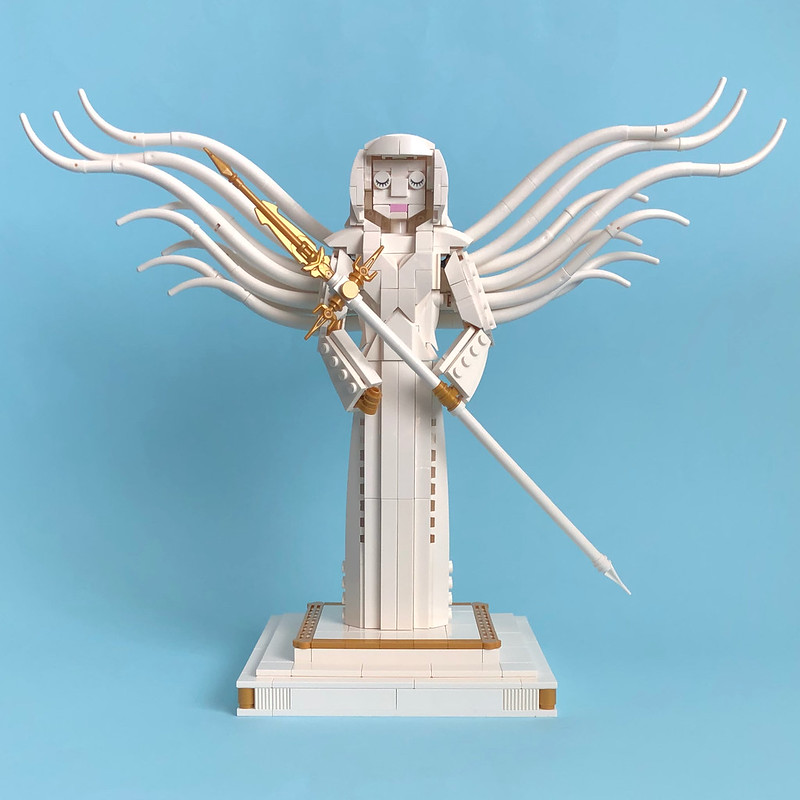 One of my biggest gripes with a certain variety of religious art is the portrayal of angels. I know you’ve seen it, too. Angels are cute: either chubby naked kids or else delicate and fairy-ish. How could a super-human cosmic entity be cute? Aren’t there any sculptures or paintings of muscle-bound ones that could be played by Chris Hemsworth in a movie? Sure, I know, angels don’t have bodies, and thus no muscles, but still. When one of them is called Michael the Archangel, a warrior of God who fights Satan and casts that fallen angel into Hell, one would expect more than a mild mannered, almost dainty face and spindly limbs in any portrayal, at very least. Enter Tino Poutiainen. 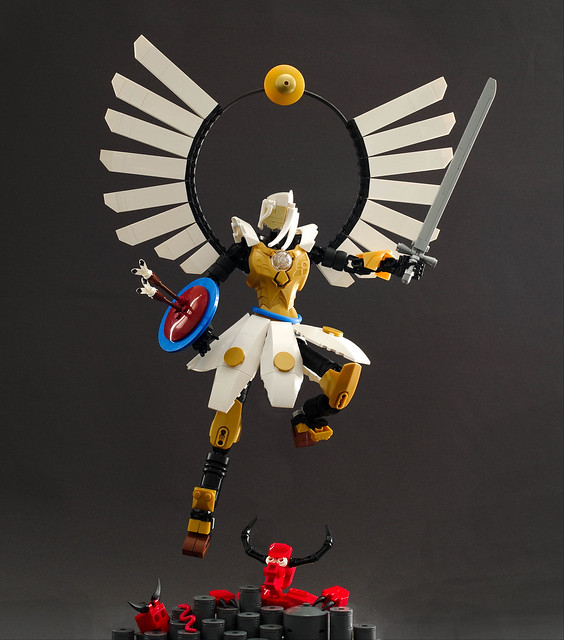 His LEGO version of the archangel might be made of small plastic elements, but there’s some serious power in that torso. And the arms avoid being spindly, too, due to those tires. And that hair! Everyone knows you fight better with serious flow (and play hockey better, too). Coolest of all, though, is that circle of wings that also holds up the halo. Such an elegant touch! The arrows in the shield make good use of the feather element, though who launched them is a mystery; everyone else seems to be cowering away from this mighty protector.

Love LEGO angels? Then check out some more at this link to see ones we’ve featured before!

This build actually has nothing to do with the defunct theme, but you can’t help but notice that Galidor staff in the center. When Cody Avery designed this angelic LEGO character inspired by the renaissance art adorning the tombs of saints, it might not have been intended to be the focal point. But we certainly admire how perfectly it fits. It’s also ironic that something from LEGO’s least “LEGO-like” theme could be used to make something so lovely. It’s a beautiful story of rebirth, with or without the staff. 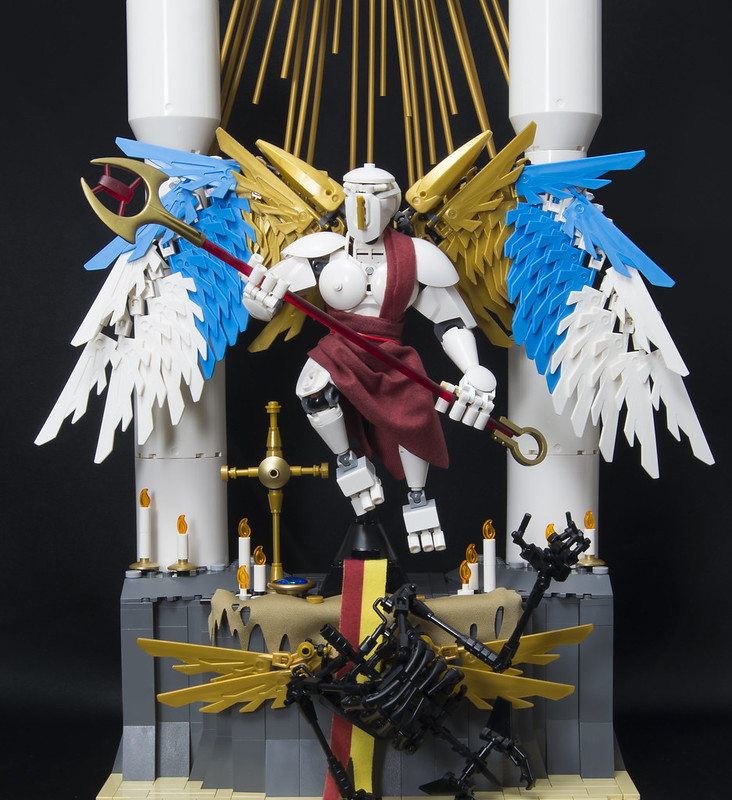 A different Galidor-inspired build better explains the history of the theme. We feature loads of creations using similar parts. Also, check out another of Cody’s builds, The Elder Beast. 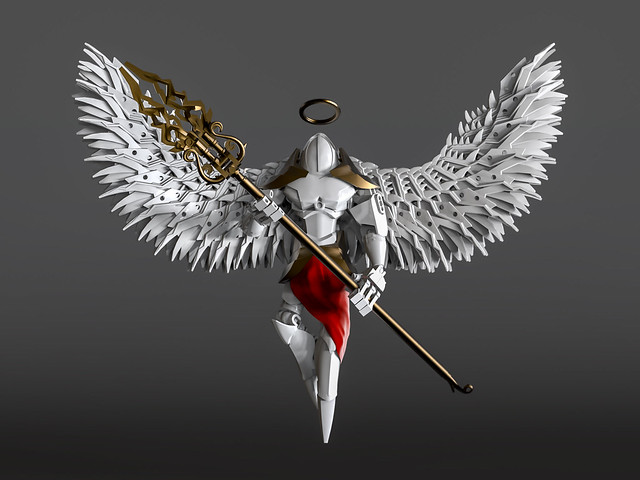 Builder Eero Okkonen returns yet again to The Brothers Brick with another amazing large scale figure. Say hello to the Blue Angel of Hallow – described by Eero in his blog post as “a superdigital being who watches over multimedia connections, protecting people from malignity and sourness.” Truly the sort of guardian we often need in today’s digital world. 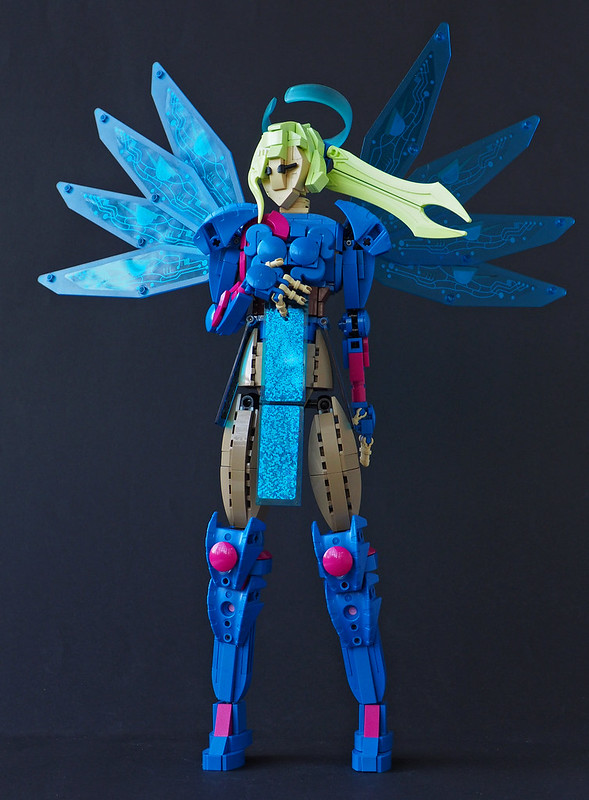 Eero has once again found underutilized parts to create interesting textures and shapes. Insectoid wings bring more than a hint of circuitry, and the use of Space Port solar arrays for the skirts is inspired. The glittery solar panel sticker has an entirely different look when seen from the underside, reminding me of static or high jpeg compression. The blue of the armor and Clikits bracelet halo contrasts well with the magenta highlights and light green Hero Factory swords of her hair.