The world of Magic: the Gathering is, despite its cheap fantasy storyline, a treasure trove of characters and other motives. Some (far too few, if you ask me!) LEGO builders like Eero Okkonen take inspiration from it and create amazing works of art. This recreation of The Wanderer is a great example of a builder capturing the original artwork perfectly. The Wanderer is a clichéd mysterious character in the lore that would be quite interesting if it was in any other story. 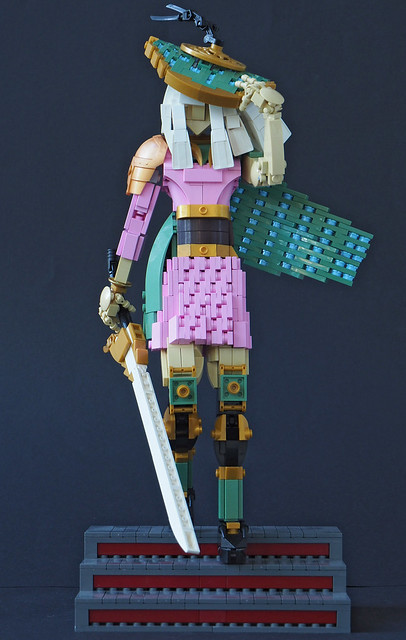 The build is mostly what one would expect from this master character builder. The real highlight is the incredible accuracy to the source material. The exotic colours like pink, gold and sand green are not the easiest to work with in LEGO, but Eero stretched his collection to the limit and successfully recreated the character, with all her challenges. The most interesting part usage to me was the Technic figure scuba flipper used as the ends of the hair. To read more about the building process, check out Eero’s own blog post on Cyclopic bricks.

A good LEGO creation will be good despite the motive and theme it depicts. Some times though, a build comes up that is both built well and plays on your personal interests. The builder that does that to me most often is Eero Okkonen. If you have been following The Brothers Brick for a while you are probably familiar with Eero’s beautiful character builds of various themes, many of which come from the Magic the Gathering trading card game, just like this particular one. 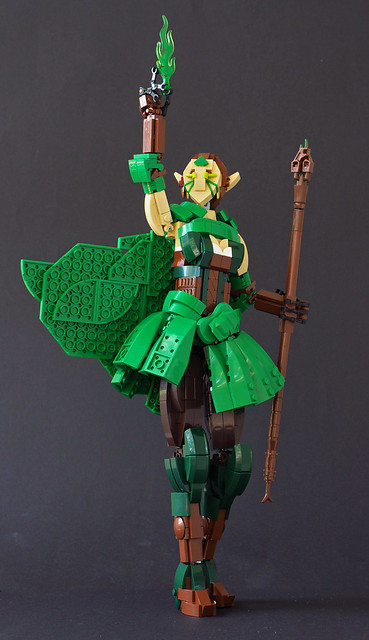 The build represents an elf planeswalker (basically a glorified mage) important in Magic’s storyline. The character’s likeness is incredibly well captured in LEGO, especially the iconic green markings on her face. The clothing and posing is great as well, with a flowing green cape and a green flame in her hand. You can read more about the build on Eero’s blog, Cyclopic Bricks. The builder is so good at capturing iconic characters that one could call him an Iconic Master…

Slimefoot the Stowaway is a Magic: the Gathering character that is most definetely not a rat, but his presence on an airship must have been much like a cross between a fungal rot and a rat problem with all the little saprolings he spread aboard the Weatherlight. Not sure what a saproling is? Me neither, and to be honest, nobody really knows anything apart from the fact that they are either of plantal or fungal origin and that there is a lot of them. Eero Okkonen has faithfully created Slimefoot and his pals. 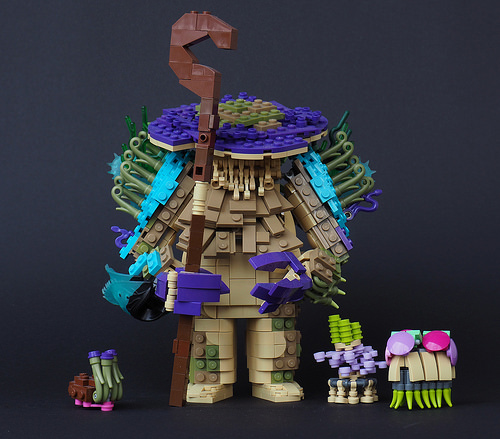 With a mastery in human shape, Eero has done a great job of capturing what is basically a deformed humanoid with a mushroom top for a head and overgrowth all over his body. The colours are expressive, and the tentacles, while not present on the original art on the card, add a lot to the character and make for a great transition in the neck area. A great addition is all the little saprolings at the mushroom man’s side, whose various shapes really capture the mystical and magical appeal of the original art.

Builder Eero Okkonen is a master of bringing characters to life in brick form. This construct is of Do-It-Yourself-Seraph, a character from the Magic: The Gathering game. I must admit the concept of having a Cyborg Angel as a gameplay character is quite an appealing combination. I love the technique of the windswept hair and downcast gaze giving the character a solemn and thoughtful appearance. Builders who choose to work with only LEGO elements have their challenges, especially for creating unusual characters like this, but it’s always helpful to be able to reach into Technic and Bionicle as Eero has done. If those wings look familiar to you, that’s because the came off a set from The Lord of the Rings theme, Pirate Ship Ambush (79008). 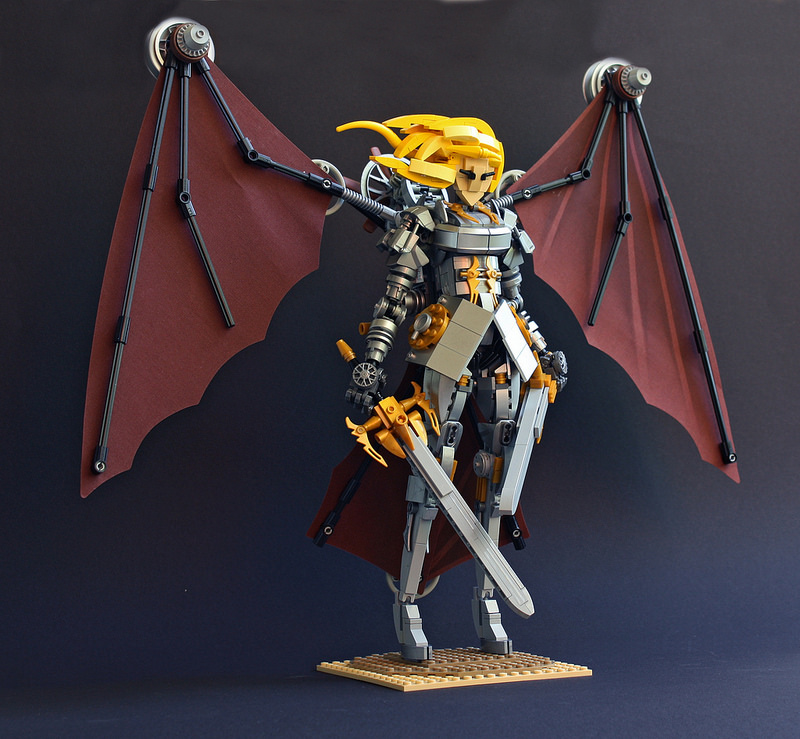 He’s been known by many names: The Mind Sculptor, Architect of Thought, Memory Adept, Telepath Unbound, the Living Guildpact, Unraveler of Secrets, and Vryn’s Prodigy. But now he needs a snappy LEGO-themed name because Magic: The Gathering fan Sergio just built Jace Beleren out of LEGO. Built in the classic LEGO miniland scale, this LEGO creation is based on original artwork by Chase Stone. 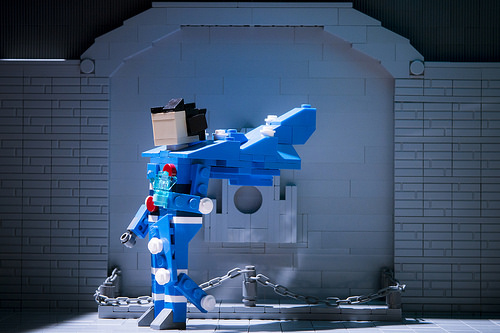 Sergio has also built the other members of the Gatewatch: the lovely necromancer Liliana Vess; the fire wielder Chandra Nalaar; the elven nature-mage Nissa Revane; and their commander the warrior-mage Gideon Jura. In addition to the great figures, the composition and lighting on these photos is simply phenomenal. 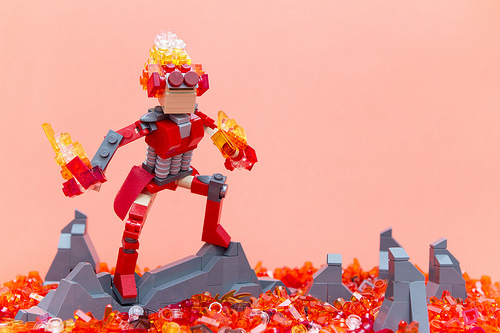 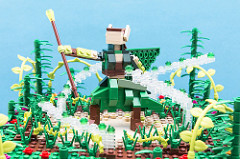 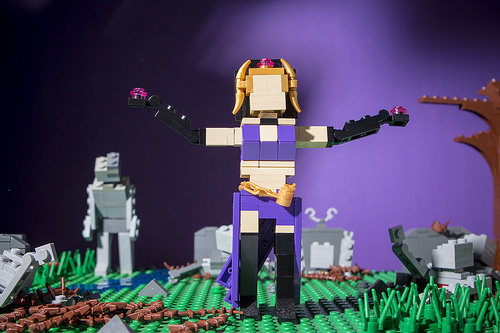 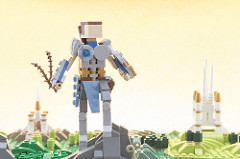 Magic the Gathering is full of amazing source material for LEGO builders. Last month we featured a jaw-dropping LEGO Sword of Feast and Famine and today we’re looking at Pascal‘s wonderful brick-built Gisela, the Broken Blade. Pascal’s version of Gisela somehow manages to capture both the essence of the original artwork while still remaining true to the builder’s own personal style. 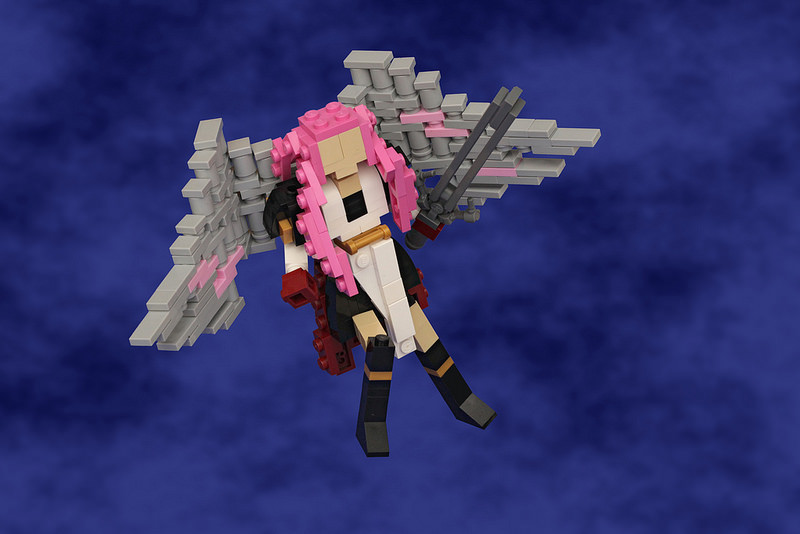 For those unfamiliar with the MTG storyline, Gisela is a powerful angel that was corrupted by the Eldrazi titan, Emrakul (an invincible spaghetti-monster). The pink bits on this build are the first signs of what I call “spaghettification.” Long story short, things do not go well for Gisela or her sister Bruna.