A builder named 呱氏神 (Gū Shìshén) has constructed, in my opinion, one of the most nauseating, vomit-inducing LEGO creations ever, but not because I dislike it. Quite the contrary. The skill level and presentation are all top-notch as evidenced by the beautiful waves, palm tree and gold filigree. My younger self would have loved the chance to go on this “Viking Pirates” ride, but as I get older it seems I’d rather quietly read about vikings or pirates and leave the real adventures to you crazy kids. 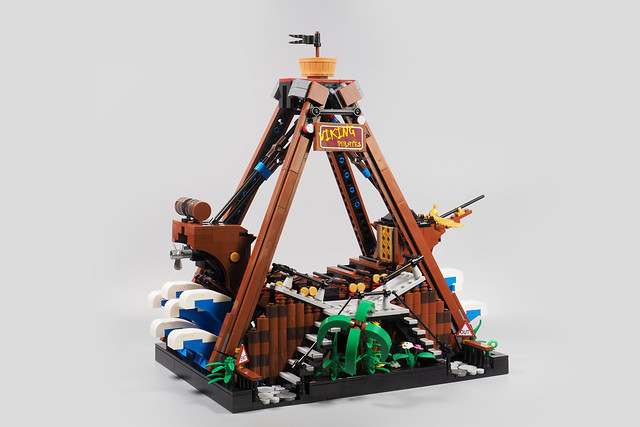 Queasy old stomach aside, this indeed looks as if it would be fun to play with. There is no video presentation for this, but the backside makes it clear that the ride works in exactly the way you’d think with the help of a manual crank and Technic gears. END_OF_DOCUMENT_TOKEN_TO_BE_REPLACED

With the new release of the LEGO Creator Expert 10261 Roller Coaster, we now have an all-out amusement park! It’s the piece of the puzzle we’ve long been waiting to add to the collection. On top of that, awesome builders are creating all kinds of fantastic rides to pair up with the Coaster, alongside the Fairground Mixer, Ferris Wheel, and Carousel. Lee Yung Chiu is one of those wonderful builders. His Pirate Ship Ride is a classic that just about anyone can identify with, and he did an excellent job. 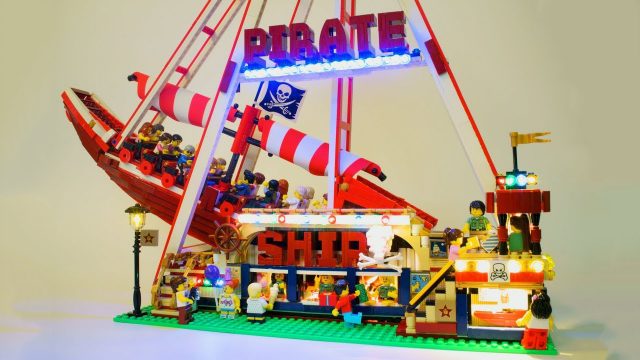 Check out the video of it in action. There’s just something about that hypnotic swinging…

Chui’s ride is filled with carnival spirit and joy, as the patrons swing back and forth. The cleverly geared system is run off of a Power Functions XL Motor and Battery Pack. The whole creation is lighted, and also includes a concessions window that can be easily removed and customized.