Birch trees continue to be a great source of inspiration for LEGO fans. This creation by gGh0st features a beautiful birch tree surrounded by some well put together LEGO minifigures. The birch tree features large patches of black due to the technic connector attaching all the dinosaur tails to each other. Brooms hide between all the tail parts, adding texture to the tree trunk. The use of the coral, as seen in the LEGO Ideas Winnie the Pooh set, is quite clever as it is a nice way to attach a lot of different LEGO leaves in different directions. This sure looks like a friendly gathering that I wouldn’t mind attending. 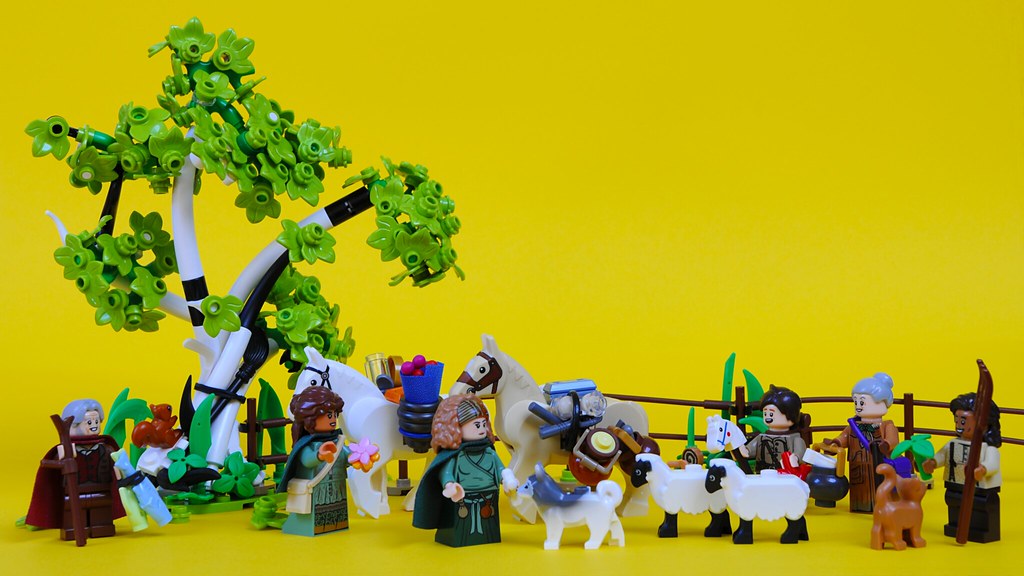 LEGO builder gGh0st has crafted a medieval market full of Muppet mayhem. All 12 of the Muppet Collectible Minifigures have traveled into the past for a chaotic romp in the Middle Ages. It might take some time to spot them all, but as your eyes search the scene, you’ll have the joy of taking in all the wonderful build work on the various castles and taverns and such – from the ingots used as bricks, to the drum kit made from food in the market. But maybe avert your eyes when you get to that guillotine…it’s like a kind of torture to have to watch that show. 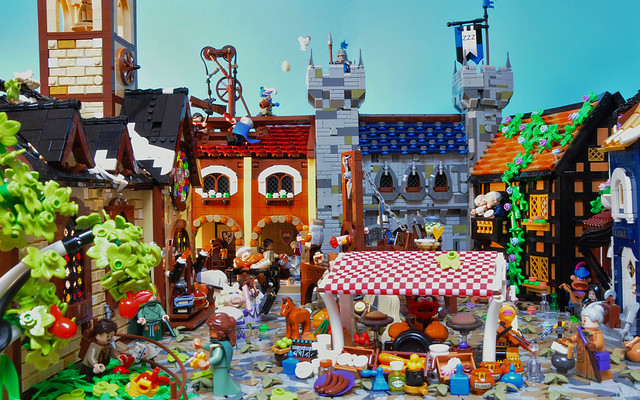 There is something about pretty sunsets that make people want to take pictures of them. Same apparently goes for LEGO sunsets. This build by gGh0st features a wooden bridge that is covered in tree branches. In my humble imagination this bridge connects the village to the castle. On it we can see a lot of villagers trading and selling their goods. We can spot a baker, a guard, a troubadour and several customers. Apparently the livestock are allowed to walk the not enclosed bridge freely, which to me sounds like asking for trouble, but apparently for these people it works. 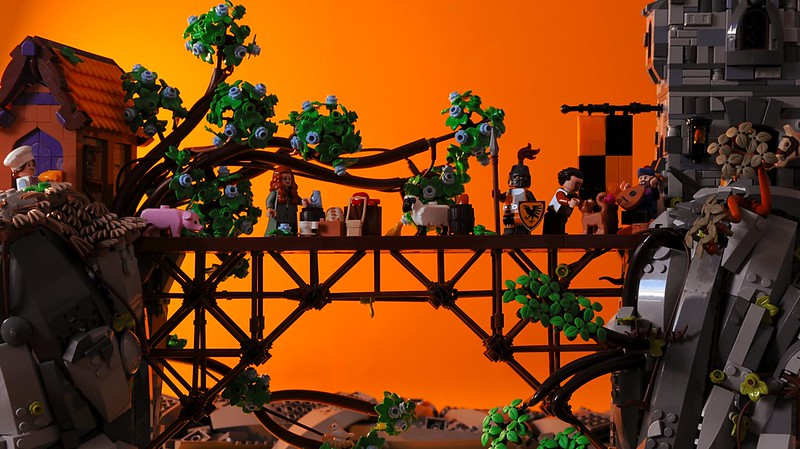 If you look closely at the rocks forming the mountains on which both the castle and the village are built, you’ll notice that it is a mumbo jumbo of different pieces. I have no idea how they are connected but it looks amazing. There even are little vines creeping between the rocks. You’ll notice these a lot better when you take a look at the midday picture of this creation. If you take a closer look at the background of the creation you’ll notice more rocks at the bottom of the picture and these rocks are formed out of loose unconnected LEGO bricks which is an easy yet very convincing method to make a rocky background. Not everything has to be a hassle.

It was 90 degrees yesterday. Sure, Thanksgiving is next week. I think that’s why I responded so warmly to this delightful vignette by gGh0st. My favorite shows are already peppered with ads featuring snowmen and elves. The shopping center across the street even has a giant Christmas tree in its center. But this past weekend, on our way to get some ice cream, my wife and I saw some kids playing in our community pool. And who could blame them? It’s hot.

So, it was nice to know someone else wasn’t thinking about gingerbread and raking leaves. This ode to the CMF Series 21 Beekeeper shows him tending to his hive in a backyard that’s ready for some summer fun. I say we join Mr. Beekeeper, grill up some honey mustard chicken, pour some lemonade, and pretend it’s still August. 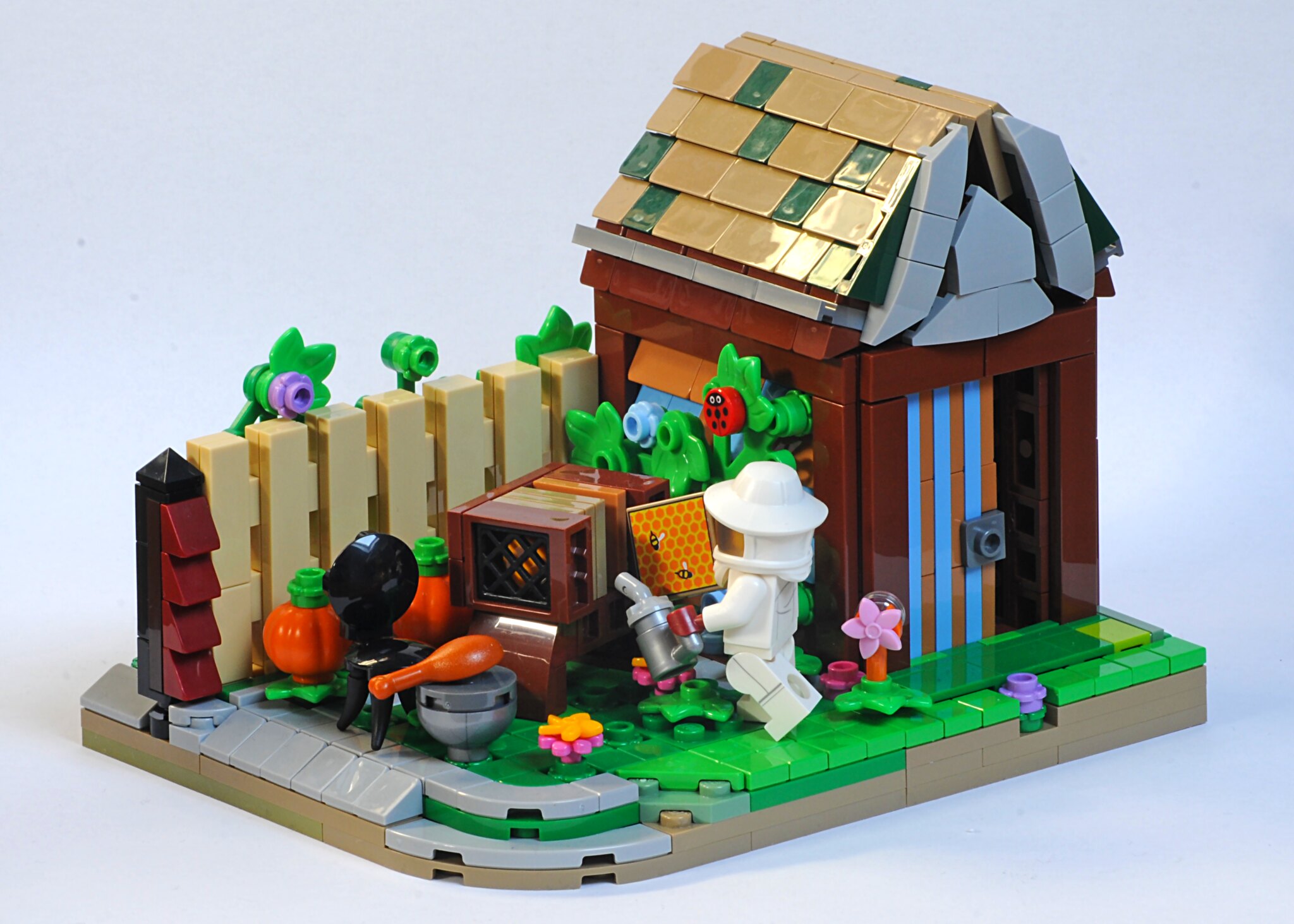