At first glance, I was thinking these dishes are piling up and someone ought to do something about that. But then upon closer inspection of this LEGO creation by Filbrick, I realized someone has brought that beautiful outdoor view into the kitchen sink. The stack of plates makes pretty good towers, and the inverted red cups replicate the tower toppers nicely. The cutting board even makes an excellent drawbridge and the sink itself acts as the moat. I’m also fond of the stove burners to the right and the use of forced perspective is pretty ingenious. If my kitchen window above the sink had a better view than a little ramshackle house of a guy who died last February, I might consider stacking my dishes in such a way. But for now, check out the filbrick archives to see other clever and imaginative LEGO creations. 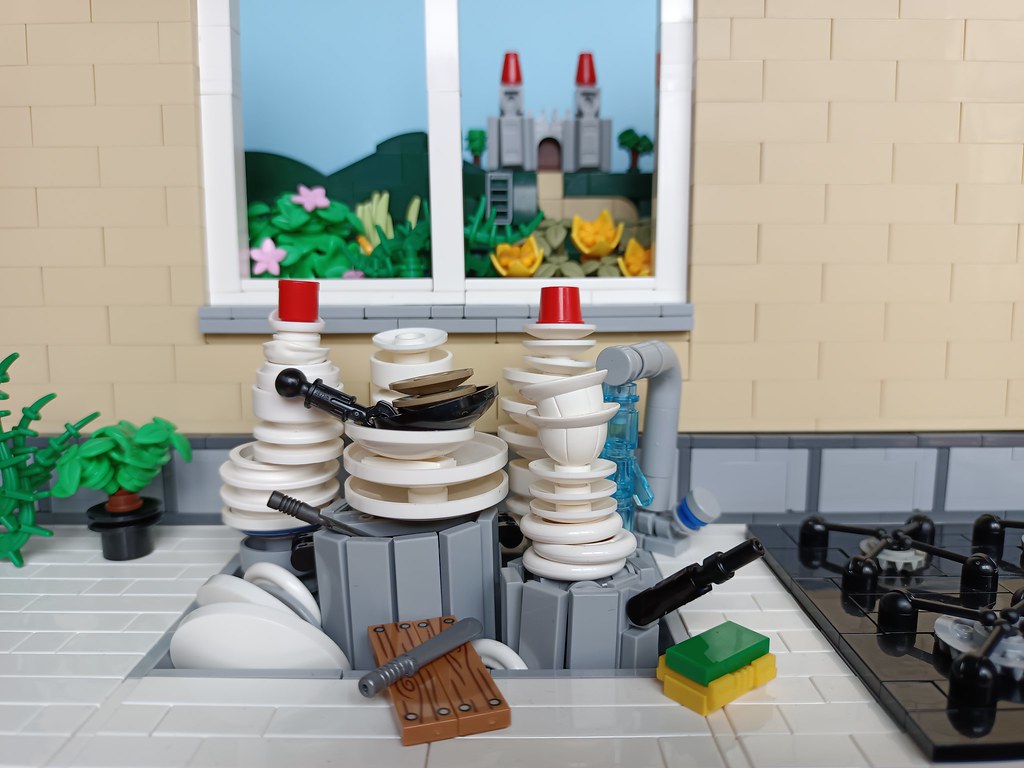 No, this isn’t Twitter’s new logo. Not that we know of anyway. Actually, we’re not really sure what’s going on with that. What we are sure of is this is a neat LEGO robot bird built by Filbrick. First glance may say blue jay, further inspection may say robotic blue jay but one detail, the black and yellow stripe along the wings, plucks the old nostalgia strings and harkens back to the Classic Space sets of yore. If you missed out on the Classic Space heyday of the 70s and 80s then check out our Galaxy Explorer set review from a few months back. 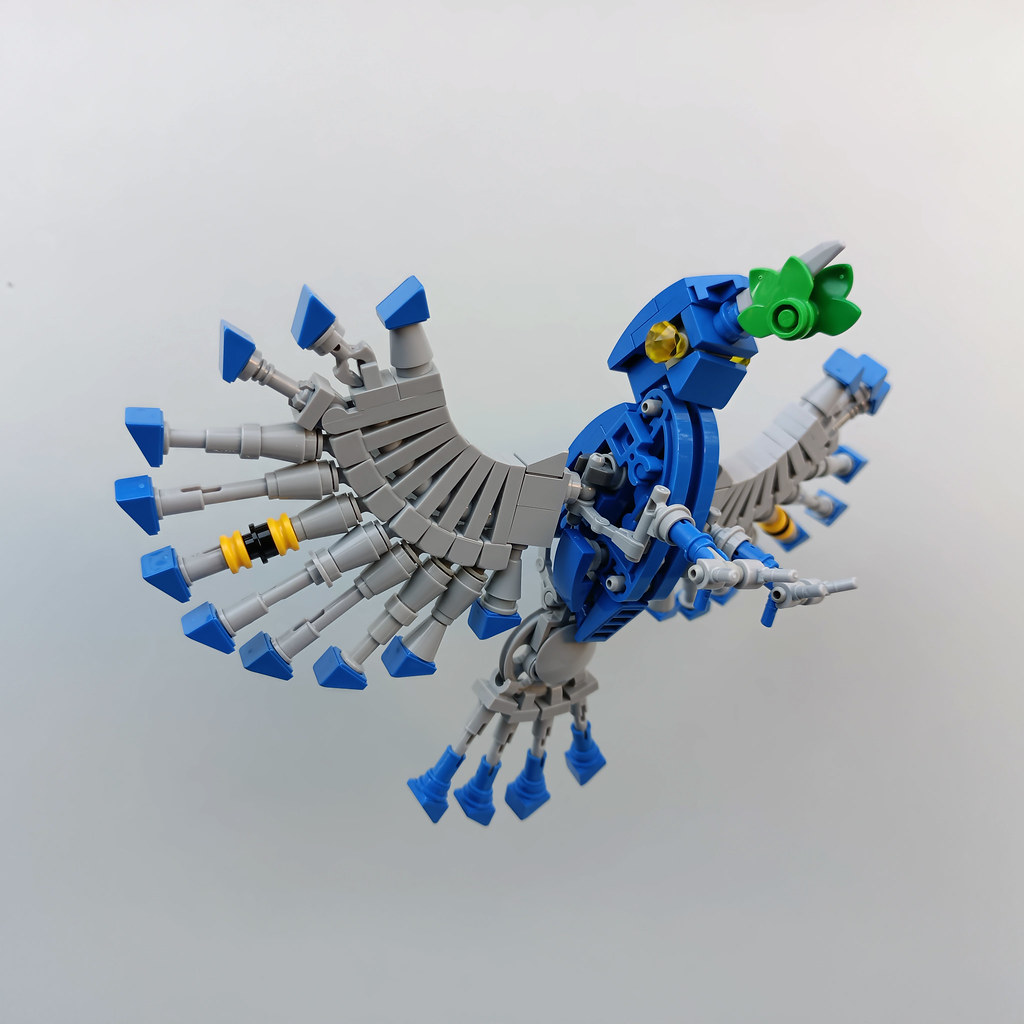 As an artist and a LEGO builder, I really enjoy refreshing approaches to building. This bold piece by filbrick looks as if it was made with cut paper. There are eight visible colored layers of brick here, including the stylish white frame. Each is spaced out a bit to create shadows between each distinct layer. I love how some layers showcase various coral and sea plants. And that bold white humpback whale, diver and fish against the dark background is a superb and striking effect. I imagine this could look lovely standing on a table or as a wall hanging. If you like this as much as I do, the builder leaves a not-so-subtle reminder that this can be voted as a LEGO Ideas set. You can use that information as you see fit. This is not the first time we’ve been in awe of filbrick’s work. Click the little blue link to see what I mean. 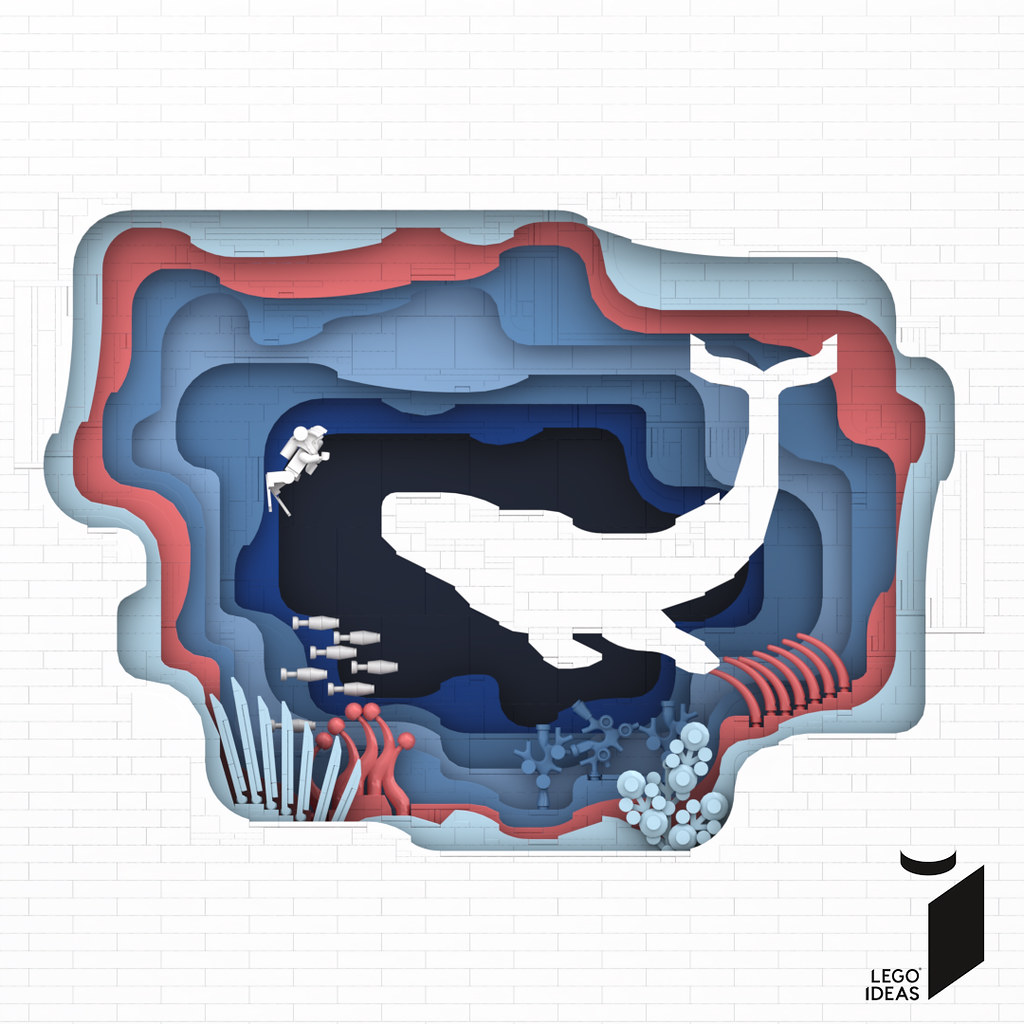 This smiling mixer by Filbrick blends big LEGO bricks down into little ones with delight! The robot just wants to help you build by offering a variety of brick sizes. The happy little appliance possesses wonderful rounded edges and arm joints, which make the red bricks stand out with their hard edges. The curvature in the top of the processor lid is made possible by hinge plates. The bricks inside the blending swirl are suspended using transparent pieces for that added kinetic feel. Of course, the LEGO fun doesn’t end there! The backsplash, plug and outlet, and the kitchen utensils are all brick-built, giving the whole scene a fun, playful atmosphere. The inclusion of a DUPLO brick is a nice touch–always good to see other LEGO products make appearances with the more widely known lines. 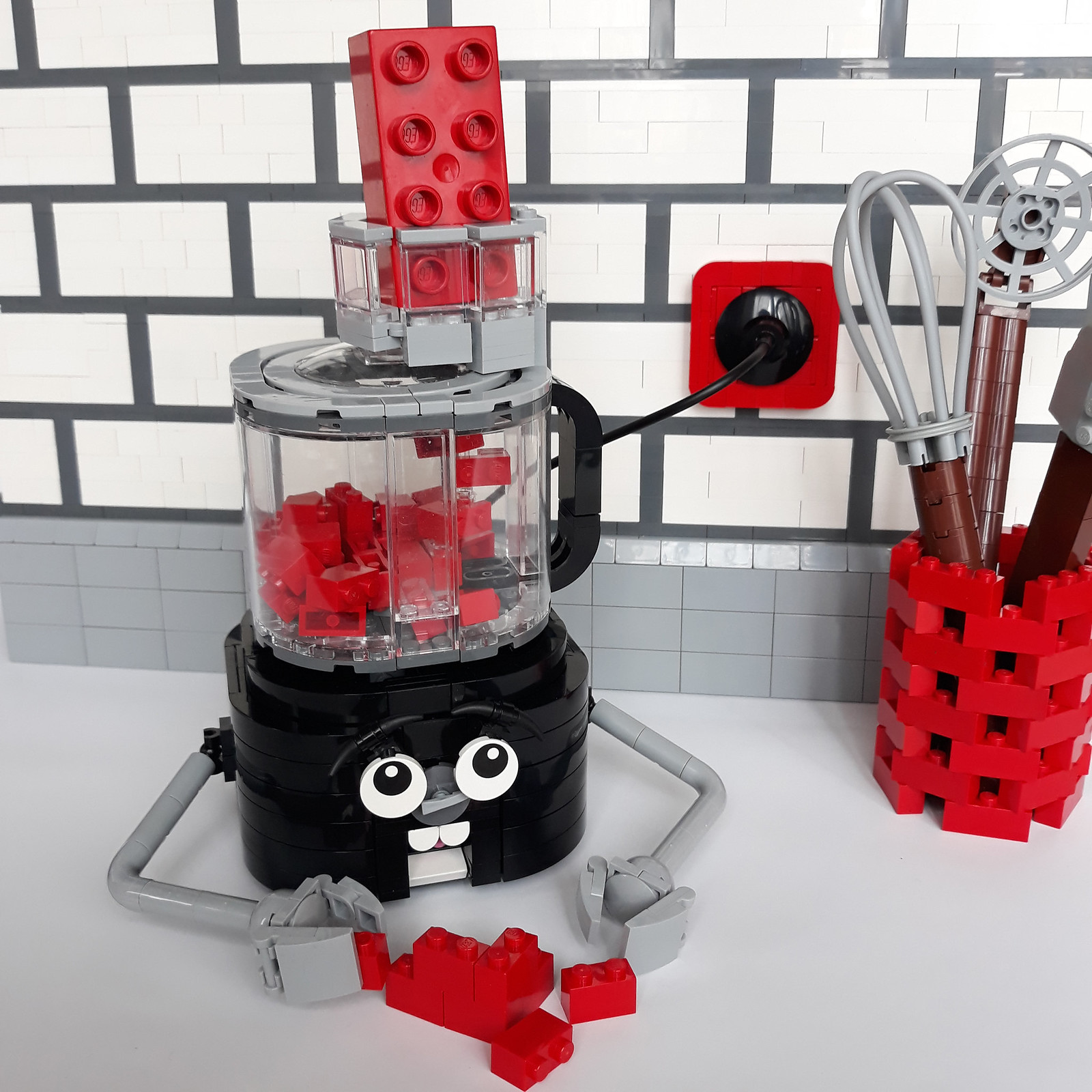 I have to be honest, I’m pretty jealous I hadn’t thought of this myself. Whenever I go to a comic-con, I always spend a bit of time ogling over the booths with lighted, layered-paper shadowboxes. How did I never think to make one with LEGO?! Well, it looks like filbrick beat me to it! First up is a shadowbox classic: a stag in the woods. I love that the builder chose to go with this color gradient. It does appear that he may have been inspired by the work of talented LEGO artist Grant Masters to complete the top portion of the stag itself. 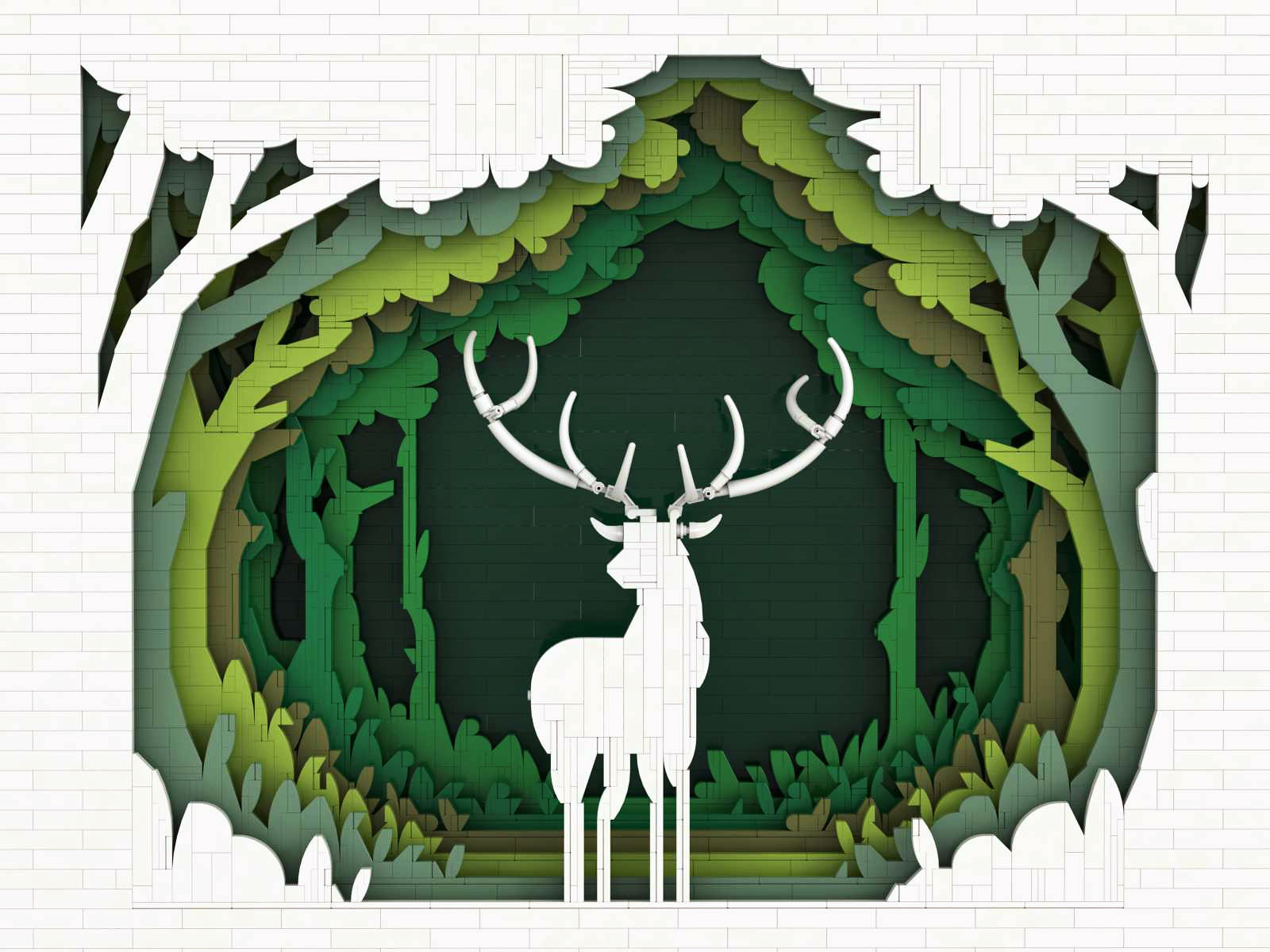 Next up is an astronaut floating in space. The colors and shapes are both awesome and trippy at the same time! The extra window on the side is a cool touch too. While both builds are renders, and I’m not sure if real-life replicas in these specific colors would be possible, they sure are fascinating! 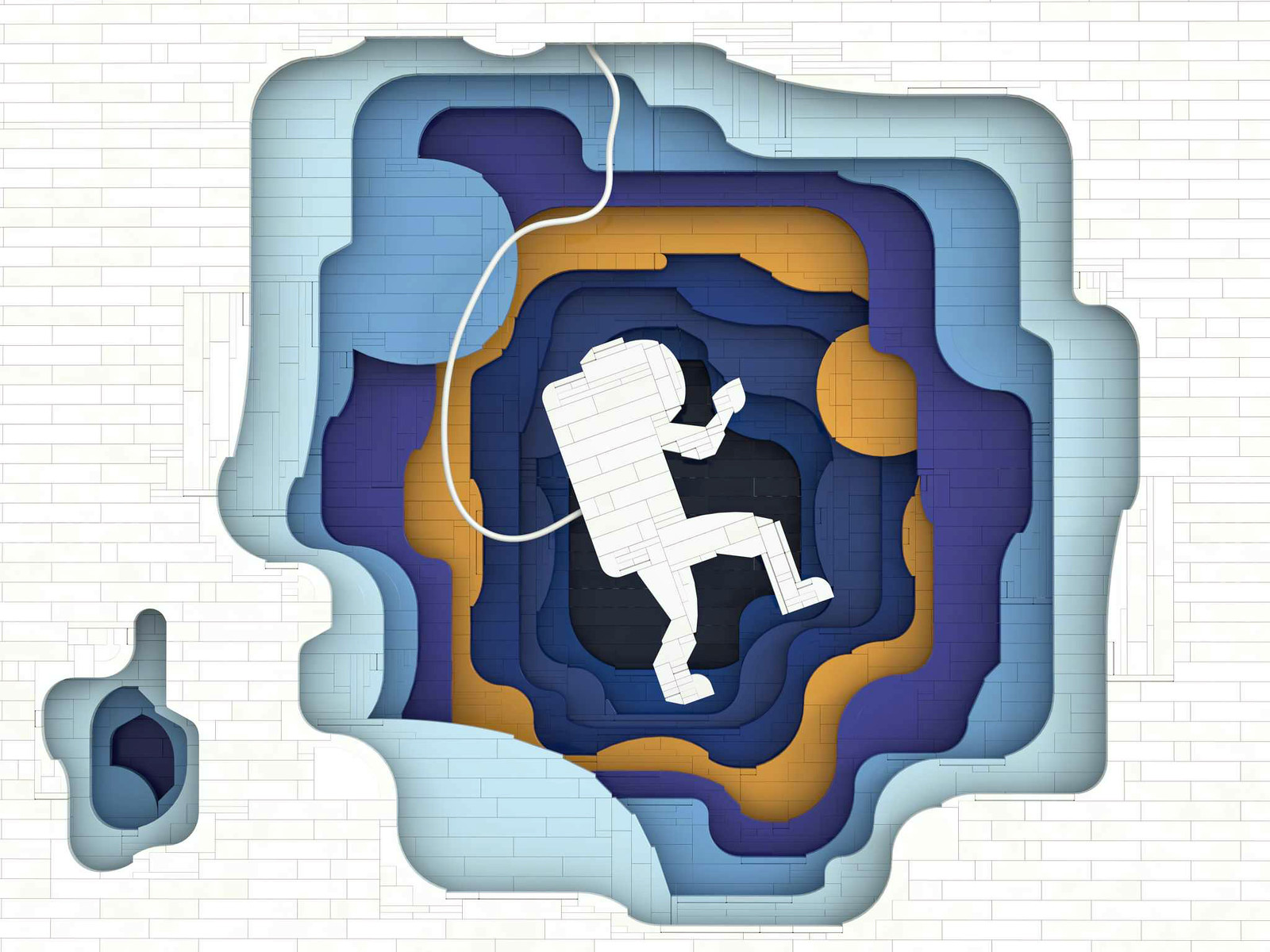 I’m going to have to test this concept out with some of my own designs! How about you? What images would you create?

Not your thing? That’s okay – we have tons of other art builds for you to check out! We also have all sorts of cool builds by Grant Masters that you won’t want to miss!

When a statue is erected of someone riding a horse, they usually follow certain rules. If the rider died in battle the horse would be rearing on two legs. If the horse has one leg up, the rider died of an injury and if the horse is standing on all four legs, then the rider died of natural causes. With this in mind Filbrick has built a statue of Napoleon Bonaparte on a horse standing on all fours. I particularly like the textured “greebling” effect on the horse using wheels, gears, Bionicle parts, radar dishes and other bits usually employed in building spaceships. 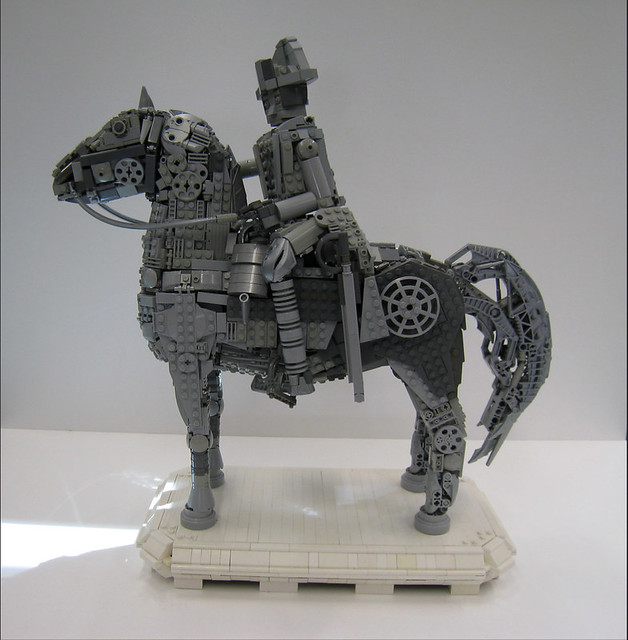 Some statues of Napoleon on horseback have been erected in all three leg configurations, because the cause of his death can be a topic of hot debate. Did he die bravely in battle defending the French army? Was he poisoned by enemies while in exile on St. Helena as so many history books suggest or was it just the unkind fate of the winds? Autopsies reveal that the cause of death was stomach cancer which may have been brought on by excessive levels of arsenic. (A-ha!) However, later studies, not available during his time, stated that Napoleon (and so many others of his day) were being exposed to arsenic throughout his entire lifetime from glues and dyes and not by purposeful murderous intent. It would seem that Filbrick’s depiction of a serene horse on all four legs may be the correct configuration all along.