This microscale model of St. Andrew’s Church in Kyiv, Ukraine, built by Christian Rau is instantly recognizable with its four angled towers topped by gold spires, and its colorful greenish-teal domes. I love the small details of light blue peeking out behind the white grills. The cheese sloped attached sideways gives the church front a visual interest. Cheese slopes are also used to form the curved central tower. 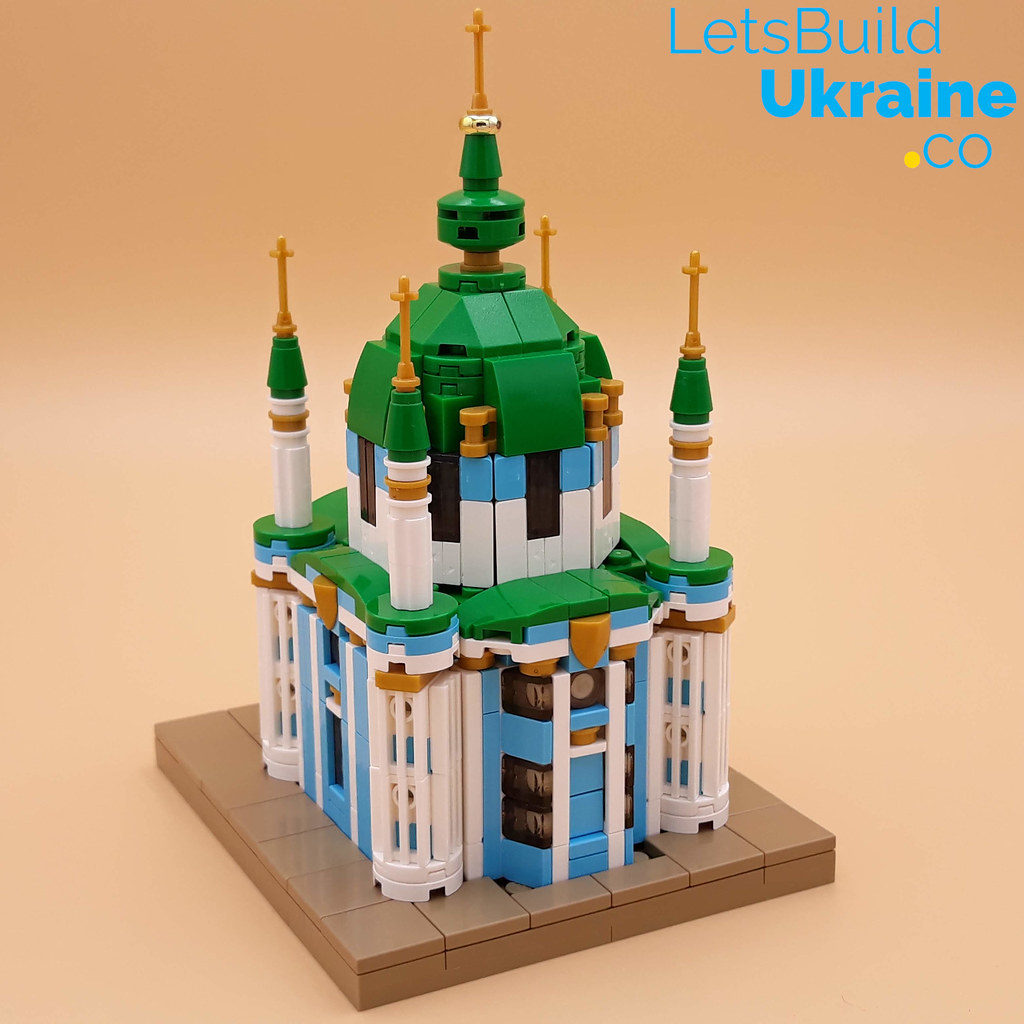 The model is a near-perfect replica of the actual building, which sits at the top of a hill in the middle of the city overlooking the Dnipro river. 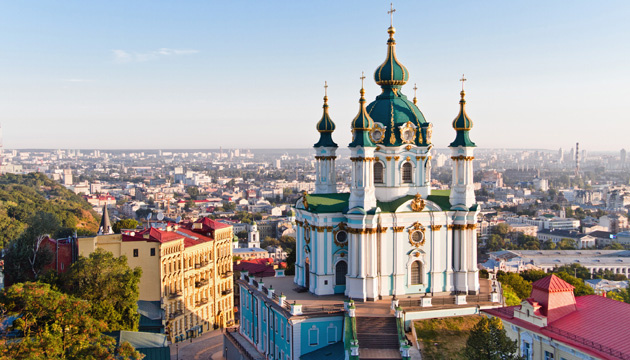 Normally I try and make up some silly commentary to go along with the builds we feature here. This, time, though, I’m going to let builder Christian Rau do the talking: 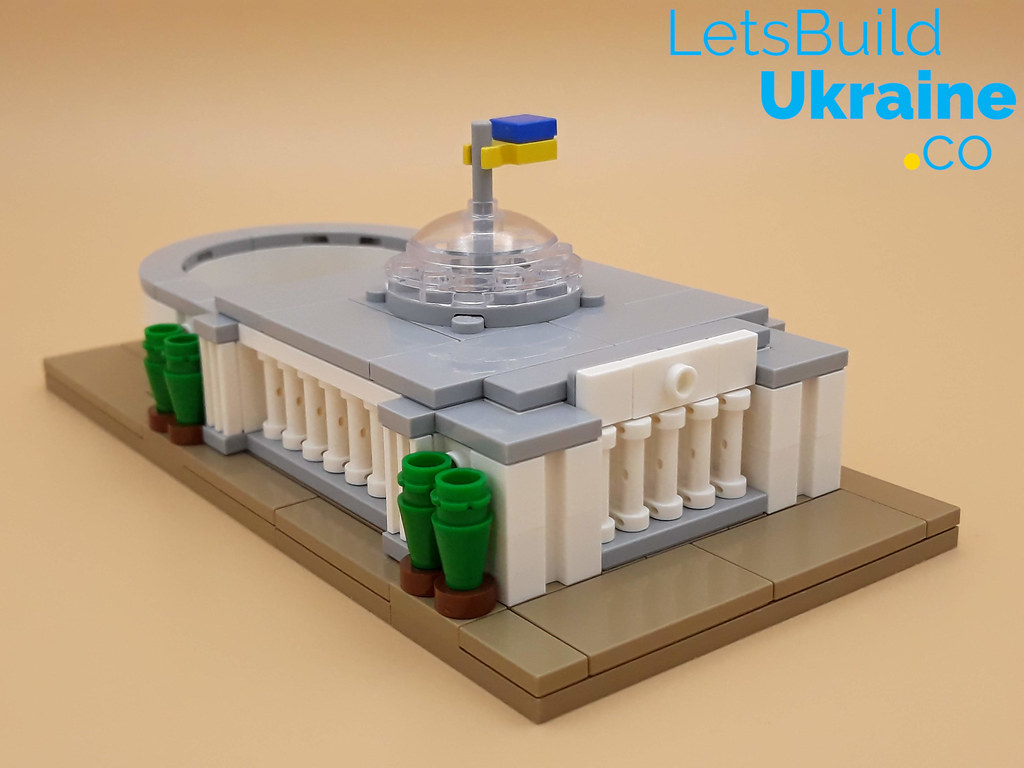 This and other models can be bought on LetsBuildUkraine.co. All profits (minus material and shipping costs) will be donated to front-line workers and organizations caring for Ukrainian children suffering from the ongoing war.

It’s a classy model, and tied to a good cause. Check out our recent feature on more ways the LEGO community has been getting involved.

As dawn broke across Ukraine on February 24th this year, the Russian Federation launched an all-out invasion of Ukraine. In my day job, I’ve been working with software development teams in Ukraine for nearly 15 years, mainly in Kharkiv, barely 30 miles (less than 50 km) from the Russian border. In the first hours of the invasion, I messaged an old group-chat from my previous job saying, “Stay safe, my friends.” My former colleagues began waking up to air raid sirens, rocket attacks, and fighter jets roaring over their heads, and I watched their online status turn from yellow to green as they began sending brief replies saying they were safe so far. 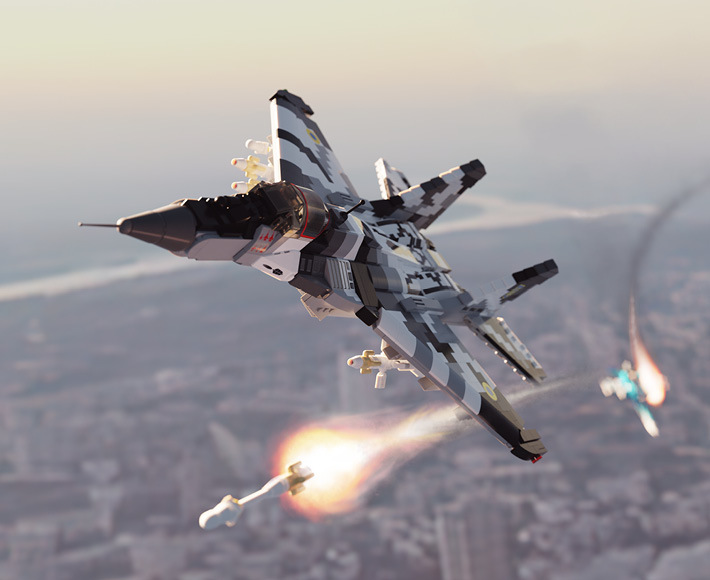 Through colleagues like these in Kharkiv, Odesa, and the capital Kyiv, as well as ex-pats here in the US, I’ve grown to love the Ukrainian people and their independent spirit. Ukrainians have been fighting for freedom and democracy ever since declaring independence from the Soviet Union in 1991. That fight became much more visceral in 2014, when a democratic “Revolution of Dignity” overthrew a corrupt, oligarchic and pro-Russian government. Russia’s Vladimir Putin immediately responded by annexing Ukraine’s Crimea region and began a proxy war to take over the industrial Donbas region in eastern Ukraine. This led not just to atrocities like the downing of Malaysian Airlines Flight 17 that year, but an ongoing Russia-backed insurgency against the democratic government in Kiev — for many in Ukraine, the Russian invasion began in 2014, not on February 24, 2022. But since February, through the Russian army’s mass killings of civilians in Bucha, Irpin, Mariupol, and elsewhere; ethnic cleansing of over 2 million Ukrainians to Russia; and ongoing indiscriminate rocket attacks and air raids against civilian targets like schools and shopping centers throughout Ukraine today, the full-scale invasion this year has proven that Russia intends to commit terrorism and ultimately genocide against the nation of Ukraine and its people. In the 5 months since the Russian invasion, most of my old team relocated to western Ukraine, though nobody in the country is safe from Russian rocket attacks and bombing. Some staff from my old company chose to stay behind in Kharkiv, and at least one has even laid down his life defending his city and his nation.

END_OF_DOCUMENT_TOKEN_TO_BE_REPLACED

Spring has sprung, and farmers all across the northern hemisphere are headed back into the fields to prepare for harvest season. For example, Stefan Johansson has depicted a LEGO Ukrainian couple getting ready to test out their newly-acquired 40-ton harrow. But all joking aside, this creation speaks volumes on a universal truth: war doesn’t spare anyone. Whether it’s a soldier on the front lines or a farmer just trying to bring in their crop, the brutal attack on Ukraine has hit everyone in some way. And in times like these, when grandmas are taking out Russian drones with jars of pickled tomatoes, I’m reminded of a line from the video game Portal 2: “…when life gives you lemons, don’t make lemonade! Make life take the lemons back!” 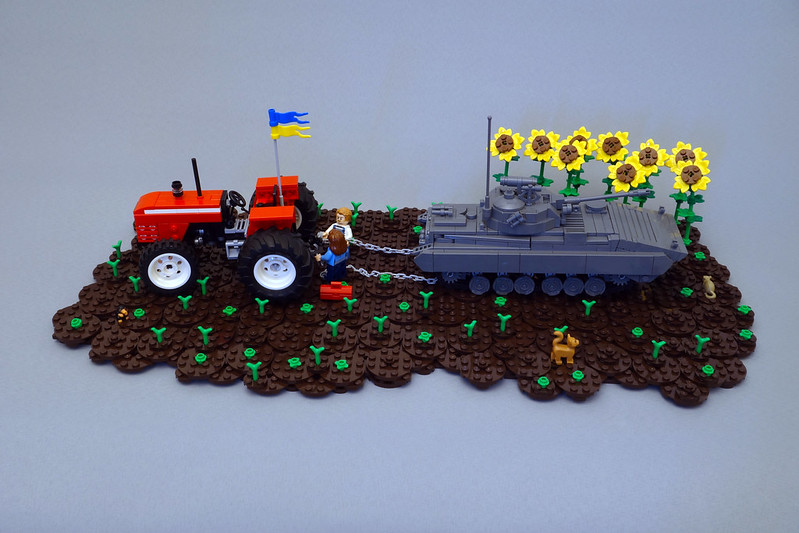 But I’m sure you didn’t come here for Cave Johnson quotes, so we should probably talk about the build. The color and style of the ground is exquisite, reminding me of walks through mint fields in northern Indiana. The sunflowers are simple, but extremely effective! I love the angles and texturing on the tank, but I think the tractor is the real star of the show here. You can see from the picture below, this machine has the look of a real LEGO set coming out of Billund. I can’t imagine it being built any better! 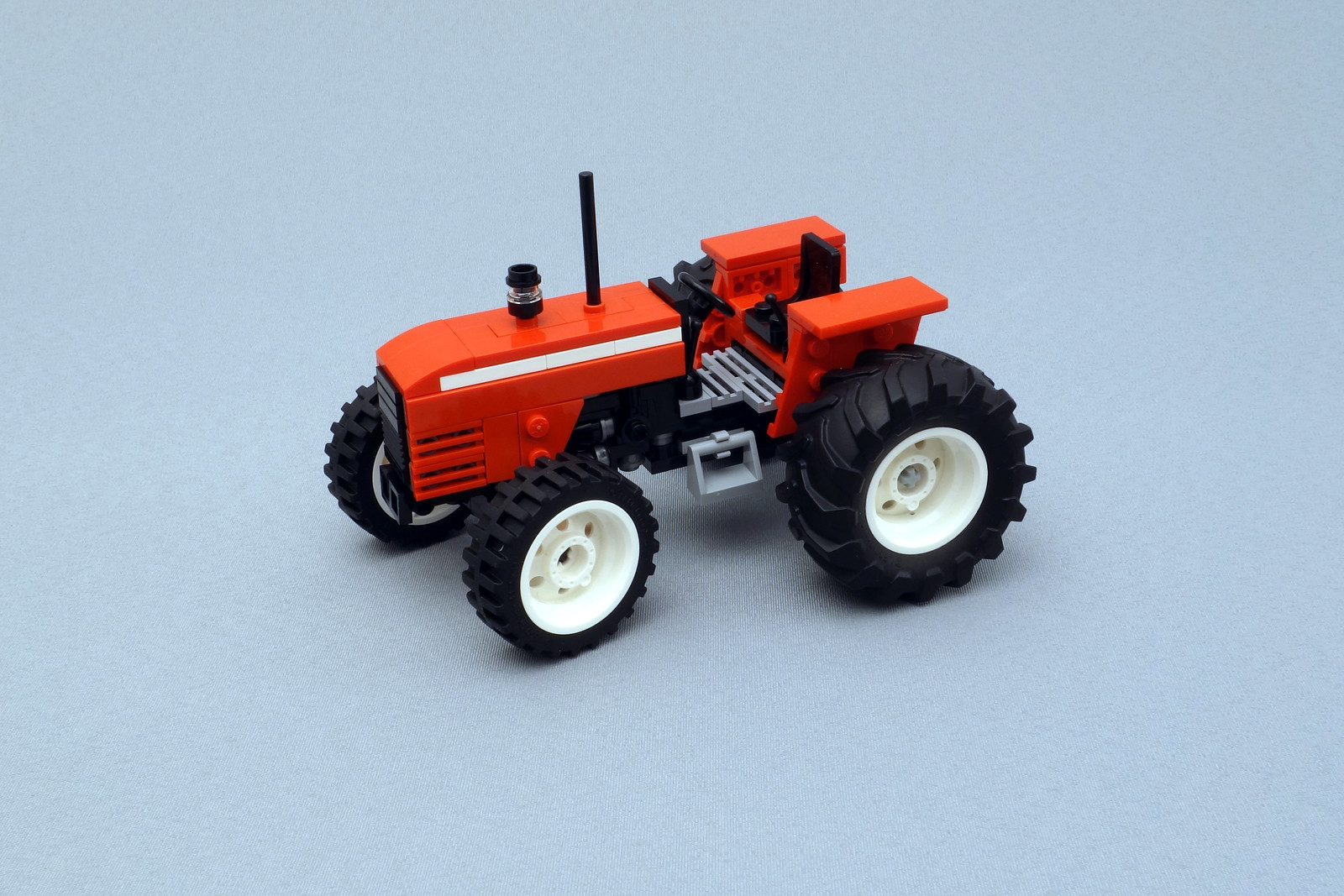 Well-known custom LEGO makers Citizen Brick‘s founder Joe Trupia recently made headlines with a massive fundraising effort to help Ukrainians in need. Fond of the fringes of society when it comes to their custom products, Joe chose to help how he could. Citizen Brick made use of their “unique designs” to produce a custom Volodymyr Zelenskyy minifigure and accompanying toy Molotov cocktails. By the end of their efforts, Citizen Brick had raised over $145,000 for Ukraine through the DirectRelief fund. 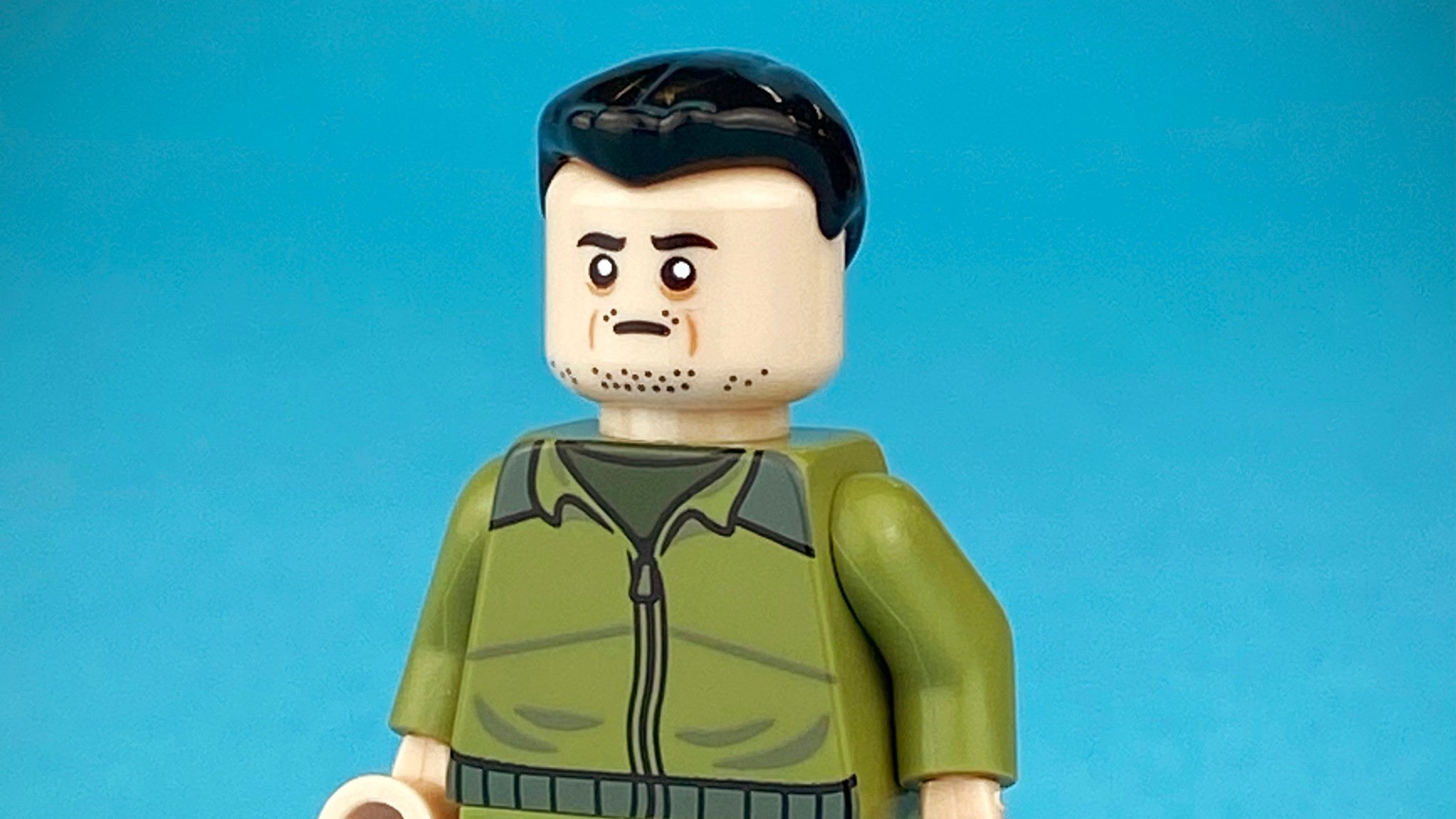 Though Citizen Brick has since stopped production of these items, they urge LEGO collectors and fans all over the world to donate to support organizations such as DirectRelief that are supporting humanitarian efforts for the victims of Putin’s aggression in Ukraine.

END_OF_DOCUMENT_TOKEN_TO_BE_REPLACED

LEGO builder Marco Marozzi brings us this ironclad mech which is nearly all made of greys with just a touch of highlight colors, including the Ukrainian flag in support of their fight. The mech is a fine piece of work, capturing the rounded aesthetic that’s often seen in the Maschinen Krieger (Ma.K.) style. I particularly like the way the joint on the knee uses Technic liftarms to hold the ball rather than a standard ball joint receiver. 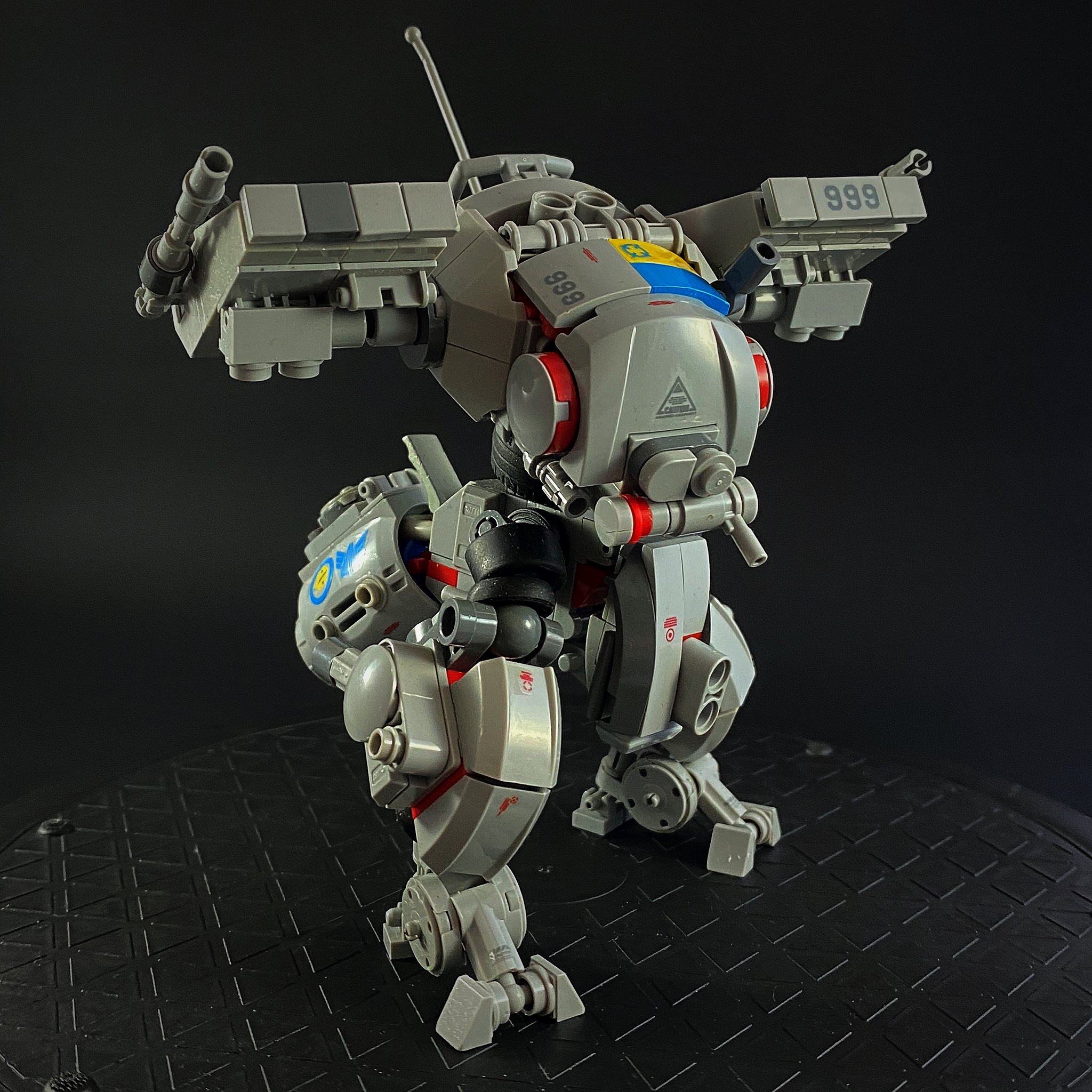 In this time of strife pressing on the chest of the world, making it hard for all of us to breathe, there are people fighting for their lives and their land. Digital LEGO builder Chris Yu has joined countless others in showing support for the people of Ukraine as they fight off Putin’s mindless assault. The Brothers Brick staff stand with Chris in this testament of support. Simple color-blocking within the parts building this blue and yellow fist of power illustrates the strength of the Ukrainian people. 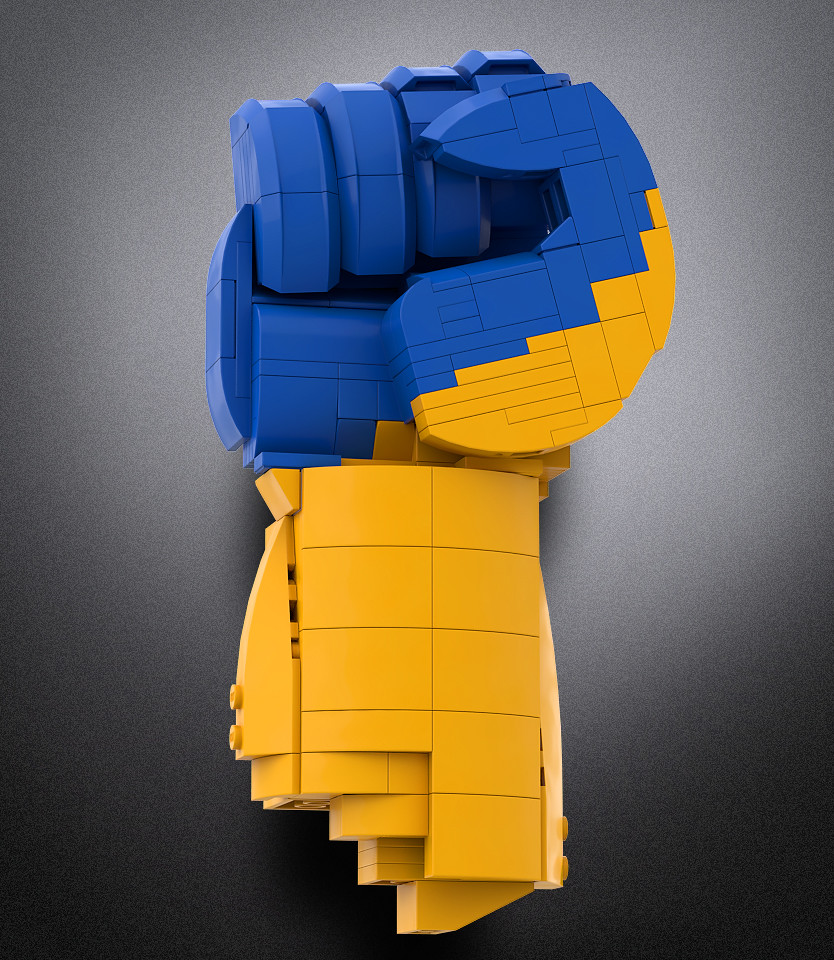 Major events like this make waves, and those waves wend their way through creative communities where expression of opinion and emotion reign. People inspired by the events of the world, like Chris Yu and others, make wonderful art worth sharing, not only for its message but also for the artistry in its execution. Our hearts go out to the Ukrainian and Russian families affected by this unfolding tragedy. We see your strength. May peace come swiftly to the hearts and minds of you all so that you may begin to move on with your lives as you wish.

This new LEGO creation by a historian who goes by the name of Benjamin acts as a stark reminder that there are currently real-world actions with real-world consequences. Here we see a Ukrainian civilian discovering possibly a loved one among a heap of rubble. Benjamin provides a passage in German that, while you are free to translate it yourself, the gist is that this is not a war of tanks and soldiers but rather of mothers, fathers, sons, daughters, brothers, and sisters, as well as kindergartens, schools, town halls, shopping malls, universities, factories, and homes. When we feature things like this we predictably get a slew of comments on social media that state something to the effect of; keep your world view out of LEGO. Or I come to this site to not see this kind of thing so stop doing it. The truth is that something as big and consequential as one country invading another cannot go unnoticed and cannot go unheard, even among us adults who enjoy building with LEGO. At the very least it has us worrying about our Ukrainian and Russian friends, family, and colleagues, but the impact of these actions span far wider than that.

Keeping silent or purposefully misinformed about such things is how wars like this get started in the first place. It’s how they can go on indefinitely. This is why we at The Brothers Brick will stand with our brethren of builders and feature articles such as this one. While we haven’t shied away from real-world problems before, this is the first you’ve seen depicting the conflict in Ukraine. I can assure you that this will likely be the first of many because alas real-world actions like this are too important to go unheard.

It isn’t every day you see historic Ukrainian landmarks in LEGO-form, but flambo14 has risen to the challenge with his delightful version of the Vinnytsia Water Tower. The structure served as a water tower from its construction in 1912 until 1920, was used as a watchtower during World War II, and was transformed into a museum by 1985. My favorite aspect of the build is the use of hinged angled plates to recreate the shape of the gray masonry on the first floor. 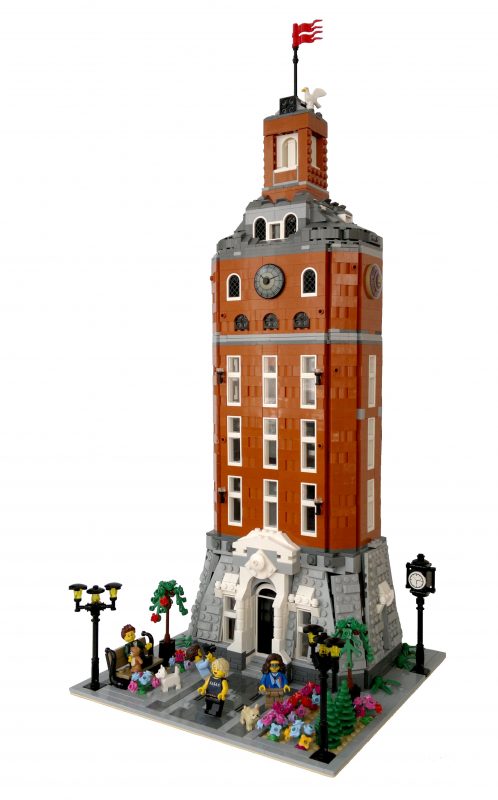