For the past 6 years, The Brothers Brick has joined with several LEGO clubs in the Pacific Northwest to put on a huge display of pop culture-themed creations at Emerald City Comicon in Seattle, which will be taking place at the Washington State Convention Center next week, March 2-5. 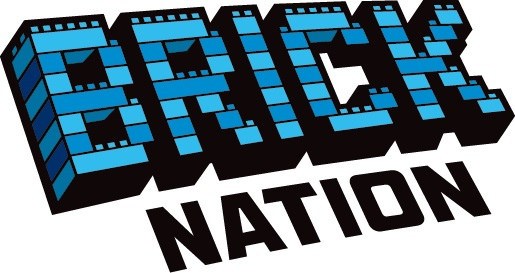 Most ECCC tickets are sold out at this point, but if you’re among the tens of thousands of people who’ll be there over the course of the 4-day event, be sure to check out Brick Nation located the lower level across the street from the main WSCC entrance, featuring creations by many of your favorite TBB contributors. The Brick Nation display will be bigger than ever this year, with over 3,000 square feet of LEGO creations, other LEGO-themed activities, life-sized Star Wars sculptures and more.

END_OF_DOCUMENT_TOKEN_TO_BE_REPLACED 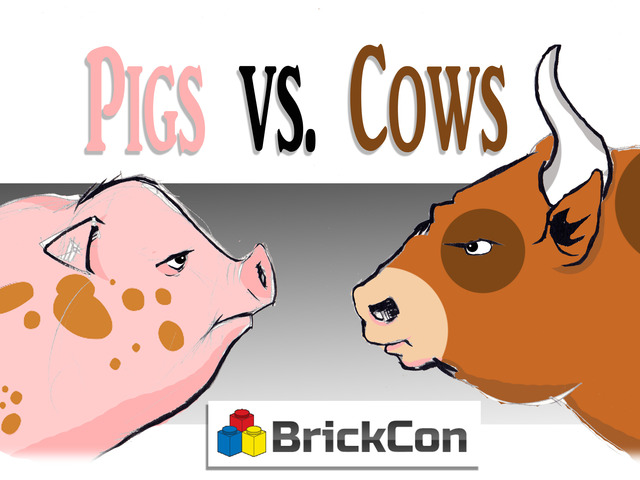 If you’re a fan of fantasy and/or talking rodents, then there’s so much to love about David Petersen’s world of Mouse Guard. This groundbreaking and expansive comic book series, with its rich cast of characters and detailed world, has already been turned into a roleplaying game, and now even rumors of a movie version abound. 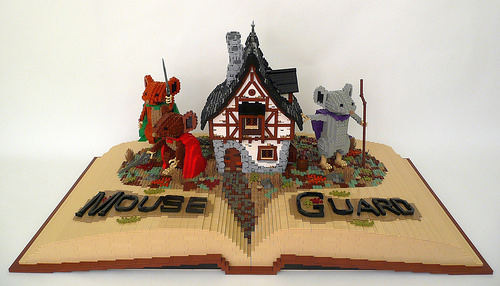 Paul is well known for his epic minifig based dioramas such as the Fabuland Fun Fair and Joker’s Funhouse. So I’m personally rather excited by his recent diversion into the weird little world of brick-built characters! It was great to see both his Mouse Guard and Tintin builds in the flesh last week. 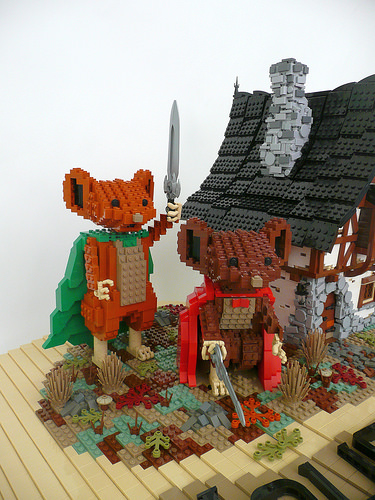 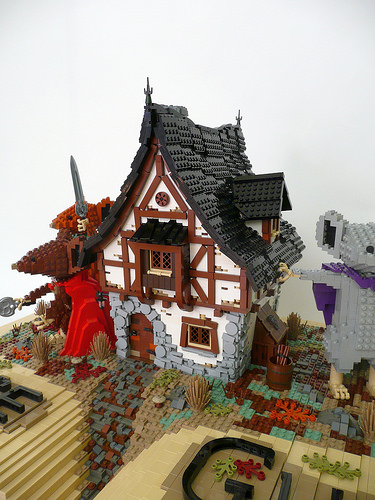 And if just one LEGO Mouse Guard creation is not enough to satisfy you, Seattle’s ArchLUG is planning a series of Mouse Guard themed builds for Emerald City Comic Con next March, so watch out for that!

VirtuaLUG collaborated on a mammoth Wizard of Oz layout for BrickWorld this year. I posted the wizard’s hot-air balloon earlier but the entire diorama definitely deserves its own post. They worked together on a large number of dioramas depicting crucial scenes throughout the story. Each of the sections is an incredible piece alone. Together they form something truly incredible. Every time I go through the pictures I find more details that I didn’t notice before. I especially love how the early scenes were built in tan, black and greys to depict the black-and-white scenes in the movies and the motorized cyclone with mini farmhouse. The vibrancy and technique in the later dioramas is breath-taking. I didn’t make it to BrickWorld but I wish I had seen this in person. Incredible!

The entrance to the Emerald City: 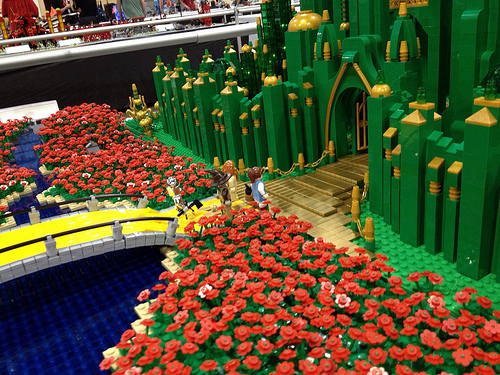 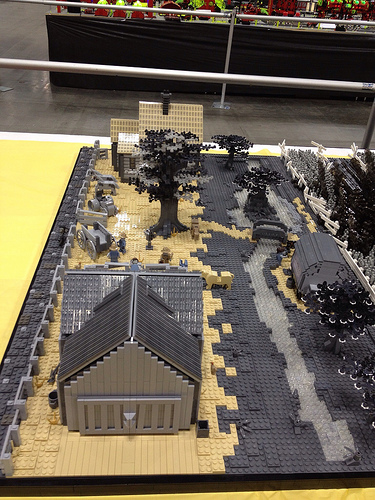 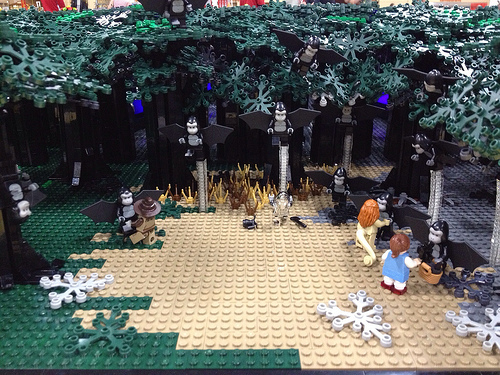 END_OF_DOCUMENT_TOKEN_TO_BE_REPLACED

set is, frankly, a bit dull, so Iain has jazzed it up with a space monster of epic proportions. 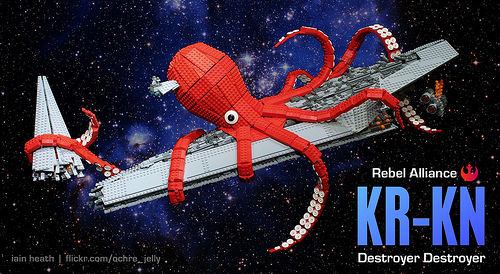 Read Iain’s backstory on The Living Brick, and go see it in person at Tableau Software, home of Seattle’s next batch of IPO millionaires.

At Emerald City Comicon earlier this month, Josh and I had the pleasure of meeting Steve Snoey, the writer/director of a Kickstarter-funded forthcoming short film America’s Fighting Dinosaur. Turns out Steve is a TBB reader himself, so we talked about just how awesome a LEGO version of “Sammy” could be.

Bruce Lowell (bruceywan) has taken up the challenge, rendering an absolutely wonderful LEGO version inspired by Sammy, alongside the men (and pterodactyl) of the “373rd Reptilian Infantry Squad”: 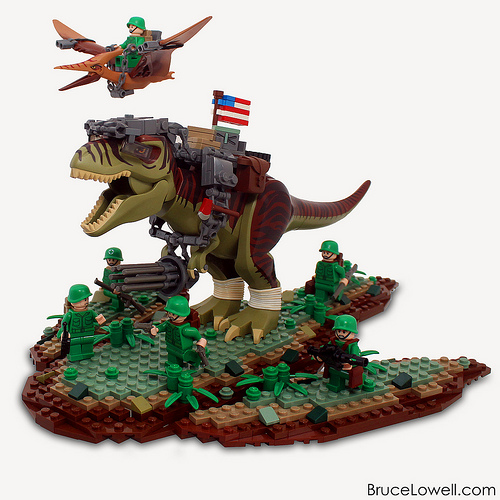 One of my favorite details that might not be especially obvious in the main photo above is that Bruce’s base for his little diorama is in the shape of a dino footprint: 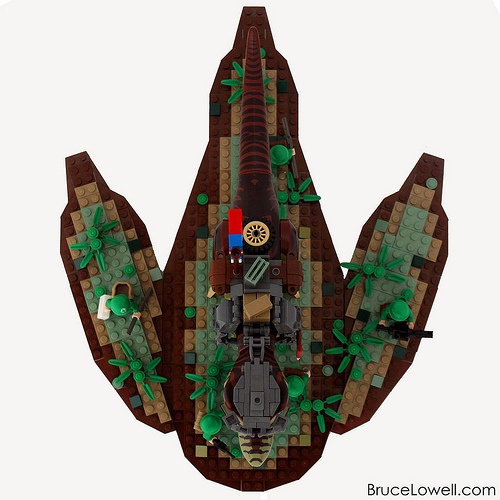 We hope you like this as much as I do, Steve! Check out lots more pictures on Flickr.

What do Hogwarts, the Batcave, the Shire, a four-foot Borg cube, and an eight-foot Space Needle have in common? They were all at Emerald City Comic Con in Seattle this last weekend! 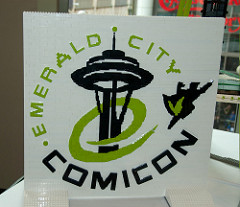 I spent three days immersed in nerd-culture and am only now beginning to recover. What an awesome time! This was the second year that SeaLUG has put on a display at ECCC and it was definitely a success.

There were many highlights throughout the weekend but a big personal highlight was getting my Patrick Stewart, Christoper Lloyd and Batman mosaics signed.

The display itself was like a “Who’s Who” of impressive builds. Alice Finch brought her incredible Hogwart’s. Wayne Hussey and Carlyle Livingston brought The Batcave, Shawn Steele brought his Space Needle, Dan Parker brought an enormous Borg Cube, there was a collaborative build of The Shire, a Miniland-scale BrickCon, DisneyLand, Mosaics, Space Ships (with Space Kraken) and much, much more. 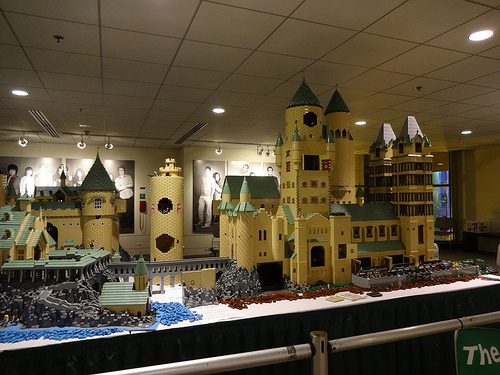 The entire weekend was full of good times, good food, catching up with old friends (Hi Will!) and making new ones. Celebrity sightings were a common occurence. I’m told Felicia Day came by and checked out the LEGO display. I attended the panel she co-hosted with Wil Wheaton but missed her apperance at the Sealug tables. Panels, sessions and workshops are a huge part of comic book conventions. I attended several, including Patrick Stewart’s (yes, he is awesome). Mariann Asanuma got LEGO on the agenda running a panel on “Building with Lego – for a Living!” 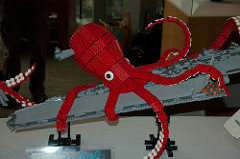 The convention attendees seemed to be impressed with the display of LEGO creativity. There was a constant flow of traffic at the tables on Friday (the only day that wasn’t sold out), but Saturday and Sunday were packed. People were lining up around the corner to check out our LEGO creations. I heard cries of delight all the way down the display and quite a few people wanted to know how to get involved with the hobby. We passed out SeaLUG business cards and BrickCon bookmarks like they were candy and people wanted even more information. 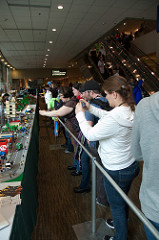 For many it was the first time they had seen what adults could do with the amazing little bricks we play with and it was a whole new world to them. So, to sum up, SeaLUG had a great time at Emerald City Comic Con. If there is a similar event in a city near your LUG, I highly recommend getting involved. It’s a great way to spread the word about your LUG, show off your creations and to meet new people! 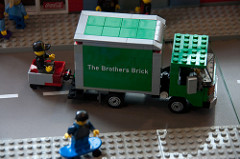 Unless you’ve been living deep in the Forbidden Forest, you’ve already seen the awesome pictures of Alice’s LEGO Hogwarts here on The Brothers Brick. Several thousand more of you got to see it in person this past weekend at Emerald City Comicon here in Seattle. But I suspect many of you wonder how Alice Finch transports and assembles her masterpiece. Wonder no more!

The redoubtable Iain Heath (AKA Number One) has boldly gone where no one has dared go before. This is Star Trek: The Next Generation as it should have been. With relatively few pieces and lot of moxy, Iain has managed to capture the true nature of Captain Jean-Luc Picard, Doctor Beverly Crusher, Counselor Deanna Troi, Lieutenant Worf and Wesley Crusher. 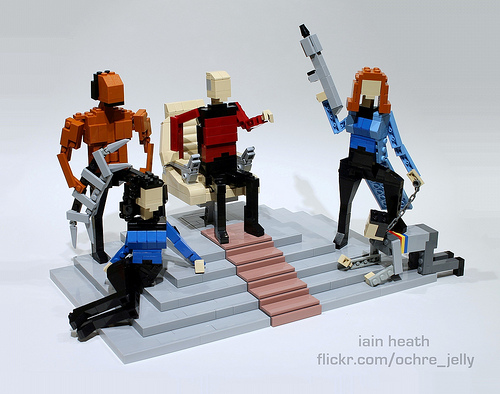 Come see this in person later this week at SEALUG‘s LEGO display at Emerald City Comicon in Seattle.

My local LEGO club, SEALUG (the Seattle LEGO Users Group), will be putting on a display at Emerald City Comicon in two weeks at the Washington State Convention Center in downtown Seattle. Day and weekend passes are going fast, so get your tickets now if you want to join us there. 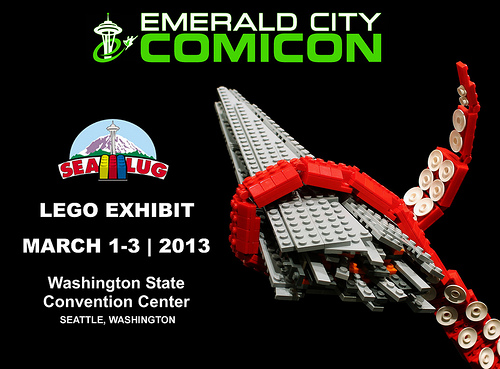 With over a hundred active members, SEALUG is one of the largest LEGO fan groups for adults in North America, and we know how to put on a display! You can see photos of our display from last year in my photosets on Flickr, and in the group pool.

Here is a little mosiac that I worked up this week. As some of our readers know, I’ve been dabbling in mosaics for the last year. This one is based on the 60’s version of the Batman logo as I am planning to attend Emerald City Comic Con next year and Adam West will be there. The plan is to have him sign it. Wish me luck! 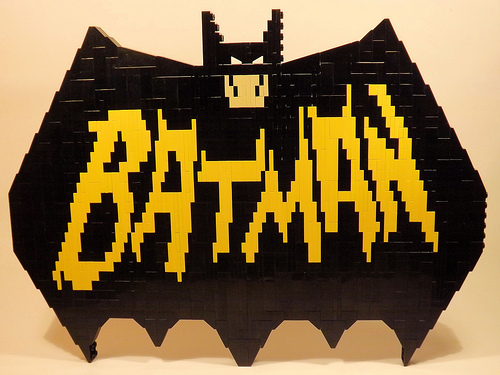 I recently finished these two mosaics and was able to display them at Emerald City Comic Con this last weekend. They are my first mosaics but won’t be my last, as they were much more fun than I was expecting. I guess there is something to be said for building outside your comfort zone, eh? 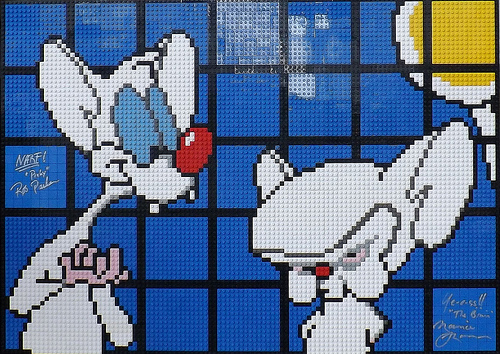 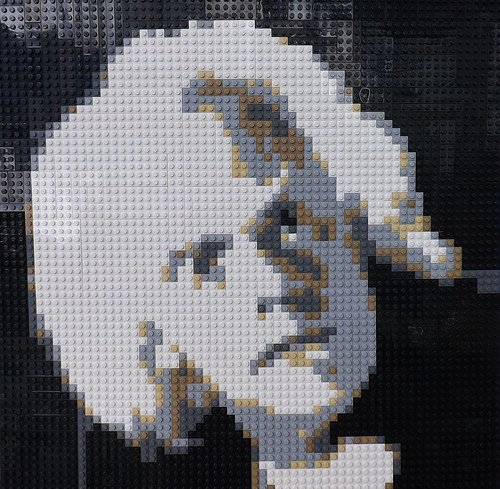 I was also able to meet Rob Paulsen and Maurice LaMarche, the voice talent behind Pinky & The Brain, and get them to sign the mosaic. Unfortunately, Christopher Lloyd had to cancel or I would have snagged his autograph too. Oh well…you can’t win them all!