As one of the founders of the Mecha Racing League, I have to say, I’m really impressed with all the creations other builders have brought to the table. So when I heard that Lu Sim was building the ARMT-M01X-SR DASH BARON for it, I was thrilled. And he didn’t disappoint, in fact he just upped the game! 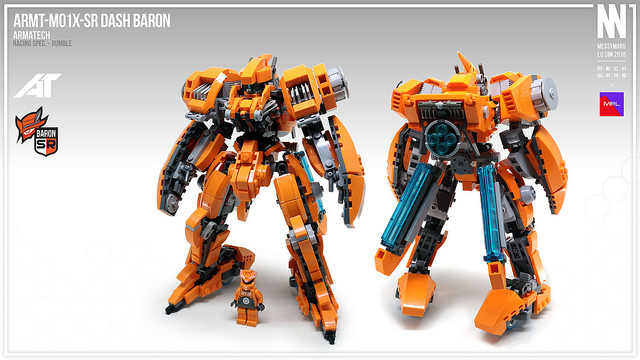 First, he used his newly modified frame that fits a pilot, which is something I’ve been begging him to work on for a long time now. With an amazing orange color and great shapes, this build looks like a Lamborghini on steroids, ready to race and rumble it’s way to victory. I’ve always loved how Lu uses flippers as vents, and here they’re just one of many details he’s added to make this build look as awesome as possible. Oh and by the way, here is a video of it spinning: 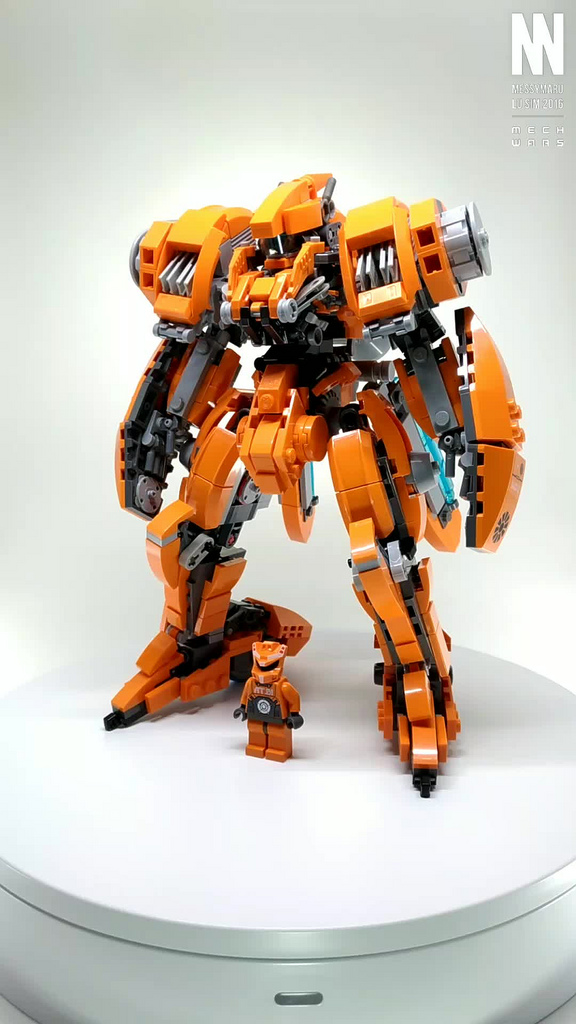 You can read more about this creation on the builder’s blog.

The Construct-o-Mech is one of the most iconic parts of The LEGO Movie and LEGO 7 just took that idea to the next level. The color scheme is perfect and the stickers add lots of detail. The articulation is great, using small ball joints for most of the build. And with the slick frame and wheels it also looks quite mobile too. 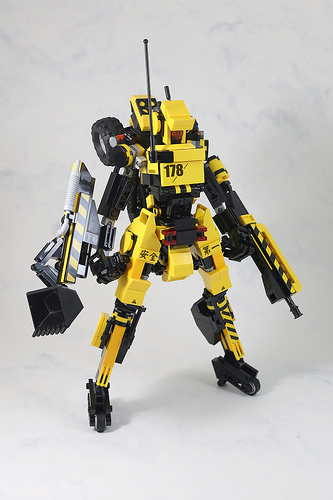 This dragon model by Eero Okkomen has made me question how a LEGO creation can have so much personality. It proves an image can tell a story without an accompanying explanation — you don’t need to be told, you just know to fear and respect the summoned serpent. 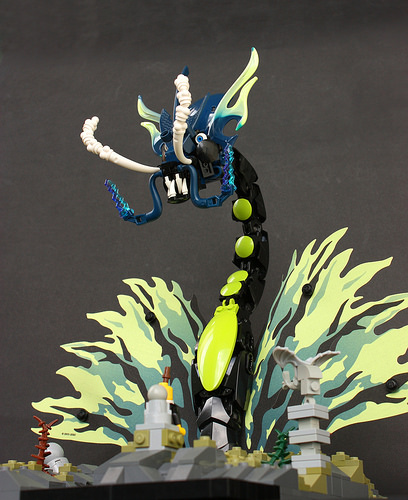 I’ve always thought the Ninjago Morro Dragon set is a mine for amazing pieces, but I would have never in a thousand years have used the wings like this — awesome. And that face — so much expression with so few pieces. The smoke coming from the nostrils is just brilliant, and so are the electric moustaches. Overall, this model is an art piece, and I wouldn’t mind displaying it in my living room, like an ukiyo-e style sculpture.

As an anime fan, it is always a pleasure to see a build inspired by one of the most iconic anime of all time, Evangelion. I’ve seen many amazing EVA builds, but as soon as I saw this build by Nobu_Tary, it was no question that he pulled out a perfect Rei Ayanami: 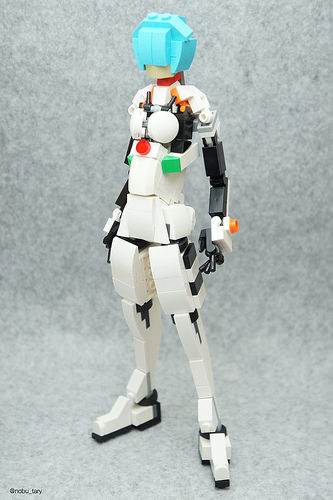 Recreating characters with LEGO bricks can be tricky, but this build has an incredible shape, looks solid, the colors are spot on, and it appears to have great articulation. This would look awesome amongst my anime figure collection!

Ninjago is one of the most popular LEGO themes, and I can see the appeal — it’s ninjas with elements and hi-tech gadgets. It’s every (big and small) kid’s fantasy. And while I’ve collected many sets from this theme over time, the most current one, Ninjas vs. Sky Pirates, is just a dream come true, and to celebrate that, I decided to build my own Ninjago-inspired mechs!

First, Lloyd’s Modified flyer from the Set 70605 – Misfortune’s Keep. When I first got the set, I knew I was going to like the ship, but I was pleasantly surprised by the concept of the flyer, so I just pimped it — added new arms, a lot more greebling, more attitude, and the name “Fujin”, and called it a day. 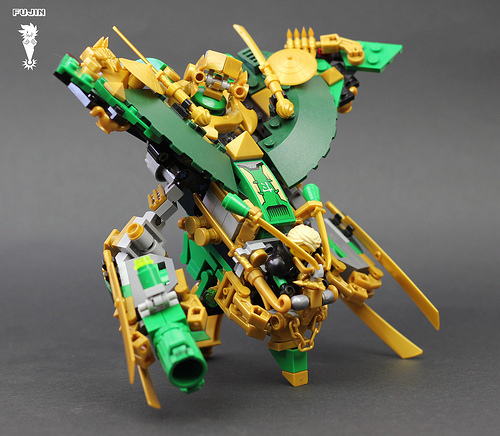 END_OF_DOCUMENT_TOKEN_TO_BE_REPLACED

It is no secret that Djordje is one of the best character builders, and he usually manages to inject incredible personality to his builds. This time, he managed to capture the essence of a mad scientist with Doctor Karnakogg: 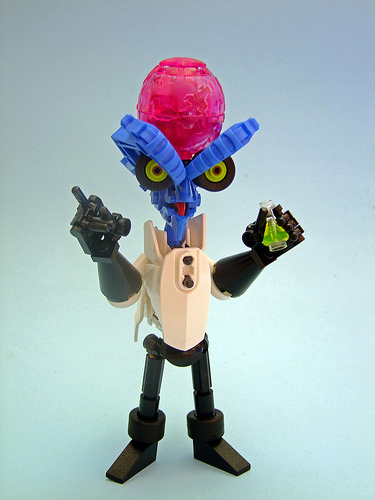 First of all, the cartoonish proportions are spot on, and you can see that this build is not really heavy on pieces — but those pieces are used in a really creative way, making it all the more impressive. What really gets me is the personality of this build, expressing that perhaps a mad scientist can be both  scary and charming.

I’ve always considered the silhouette of a mech one of the most important aspect of its design. You can recognize the most famous mech from that alone, and this AL-HDAMCT H’DA created by Lu Sim has one of the best silhouettes I’ve seen: 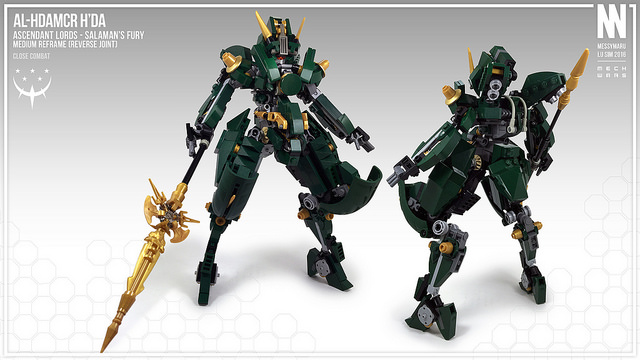 The dark green and golden color combo is just majestic and suits the design perfectly. The reverse knees, a very unusual configuration for a reFrame, a very oriental “dragony” vibe and that amazing spear complete this fantastic build. For more details check out the post on Lu’s blog.

VW Beetles (or “Bochos” as they are called here in Mexico) are a timeless design. Here’s a pair rebuilt as tiny hot rods. Tim Henderson, you deserve a hug for the detail you’ve packed in at this scale… 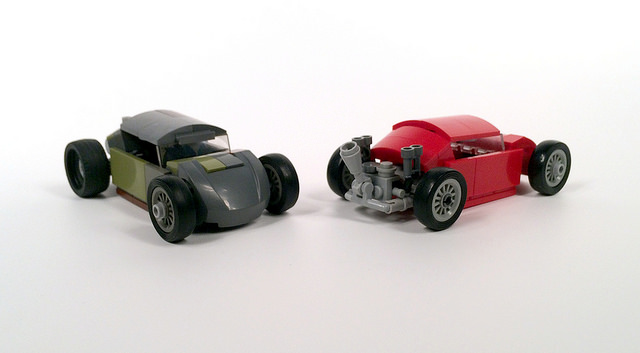 There are two models because the builder wanted to illustrate both the tatty and rusting original car, and the shinier version following its restoration. Tim has even managed to create two convincing engine designs — great work with such a small amount of pieces. 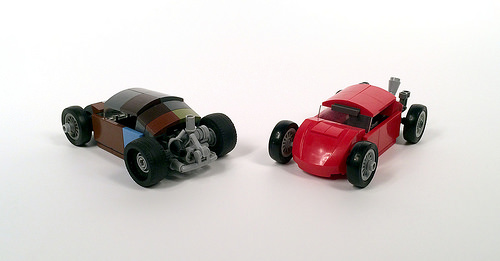 So, I’ve been playing Overwatch a lot, so it won’t surprise anyone that things you like inspire you, and I’ve been playing Zenyatta a LOT lately, so when I wanted to build my next MRL Mech, it had to be inspired by him, and hence, the OMH was born (or built): 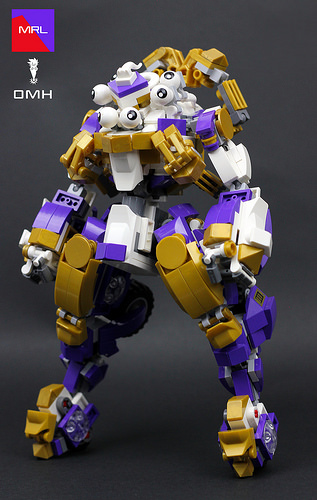 It was actually a pretty fun build, and done in record time as well, for me at least. I like the purple, white and gold together — they add such a royal look — and using mixel eyes as beads was an unintentional discovery, but to see the true beauty of this build, you have to Gaze into the iris: 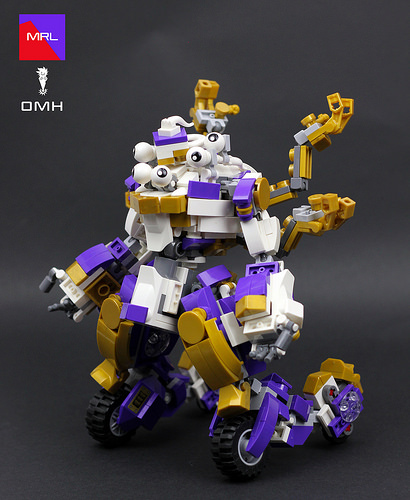 On its Enlightenment mode, it becomes a rolling repairing mech, with two additional pairs of arms, which is, if I may say, kind of cool.

Space mechs are always a sight to behold. I mean, what is the purpose of legs in space? You know what their purpose is? To look cool—and the MA-01C Powered Seraphim I by Caleb proves it. 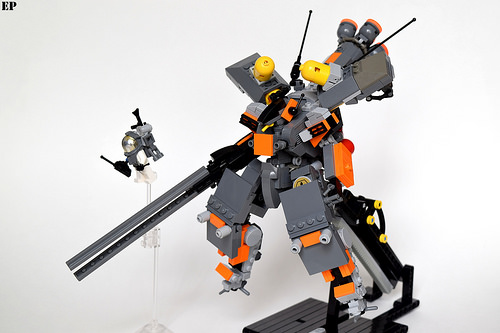 This build certainly catches your eye with its incredible silhouette and the bold use of orange as highlights for the armor. The spacemen backing it up just serve to show a proper scale, especially considering it fits a minifig inside. It also comes in a flight-ready version sans armor plating. 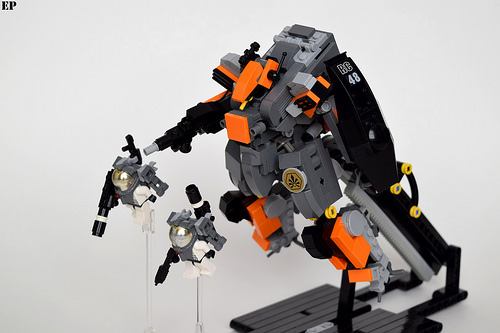 Now it looks like it can cause some deep space damage.

Pizza is the prime example of comfort food (even brick-built pizza), and there’s no better place to spend time with friends than a Pizza place, and Gzu Bricks just recreated such a place in LEGO. 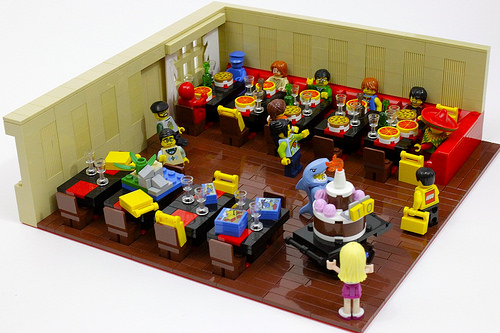 It is always fun to watch a creative scene, and this feels like a place where minifigs go after a long day of play to share a pizza. Meta Fact of the Day: they play with smaller LEGO sets. Check out the small boxes near the cake.

Blizzard’s new game Overwatch is awesome. I just can’t stop playing it, so when I saw that Taylor built D.VA’s Mech I was so happy I actually stopped playing to check out all the details this great build has. 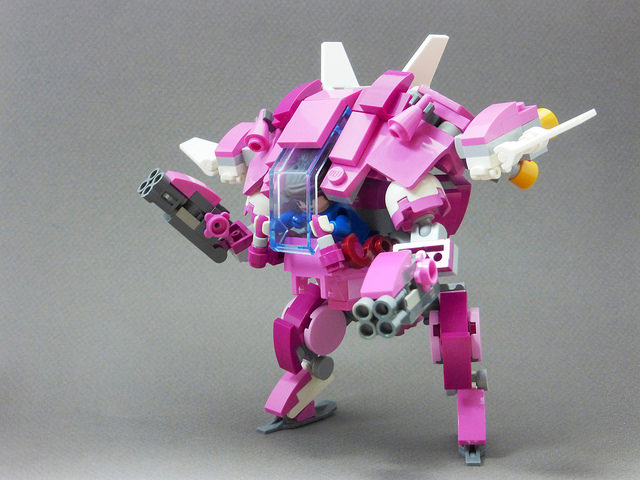 First of all, it looks just like the real thing. The pilot (Hana Song) sits the same way, the scale is right, the arm canons are proper and the color is correct. I think this could be an official tie-in LEGO set, and no one would complain.