Full disclosure: When I started to write this article, I reached for a chocolate stocking-stuffer holiday treat. That’s how good these LEGO desserts by Mikael Montelius looked to me. The execution is simple, yet elegant. Minifig hairpieces make for excellent truffles and the use of brown and tan makes it all seem like delicious chocolate and nougat. The brown ingots giving the appearance of a breakable, sharable chocolate bar is just; chef’s kiss! It’s almost too tempting to break off a piece for real. As it turns out, brown LEGO — especially older brown pieces — are known to be quite brittle. As mouth-watering as this appears to be, I wouldn’t recommend eating LEGO, though — it’s not as satisfying as you’d think. However, what is satisfying is a delicious romp through our LEGO food archives but I recommend grabbing a snack first. 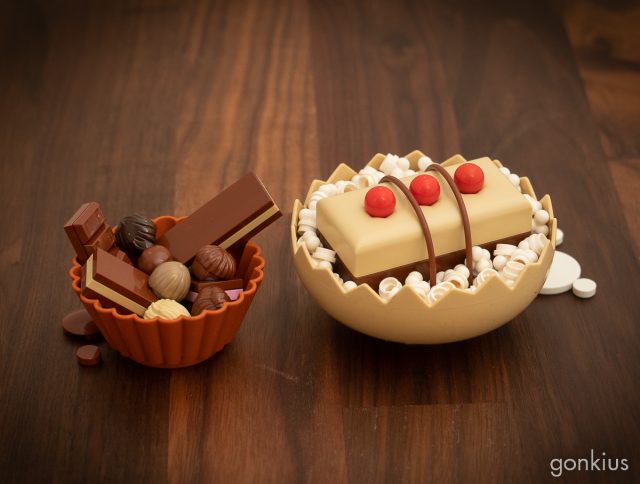 Some LEGO fan creations we feature over at TBB, consist of hundreds of different little parts. Some creations are a bit less part intensive, but that doesn’t mean they are less clever. This creation by Isaac Wilder. is a great example. Isaac is known for his brick-built vehicles but sometimes draws inspiration from different sources. This time the inspiration might have come from the egg part or it might have come from a very nice charcuterie board enjoyed with friends over the weekend. I think we can all agree that the use of green eggs for grapes is absolutely perfect. Pairing it with a great flavoursome cheese is no more than logical. 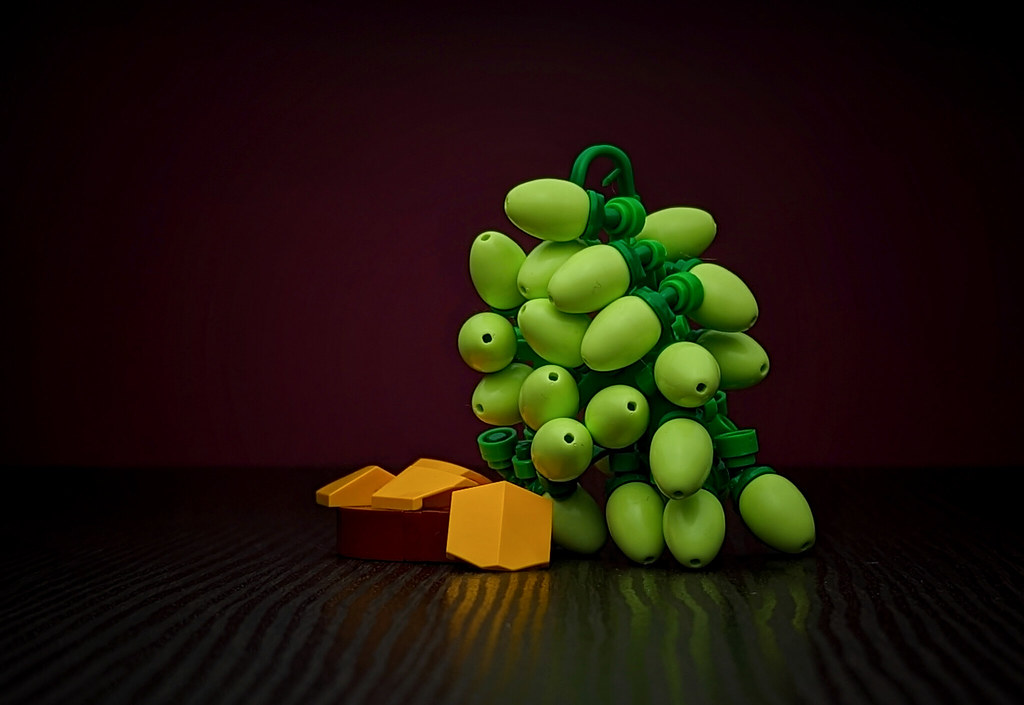 I’m pretty sure that Jaroslaw Walter knew that I was starting a diet today, and that the last thing I needed to see was a delicious, melty LEGO Italian sandwich on ciabatta bread. I know it’s made of plastic. I know those juicy sun-dried tomatoes are actually minifig fireman helmets. And I know that the ooey-gooey cheese is accumulating on the parchment paper in pools made of 3×3 and 4×4 radar dishes. And, yes, I know the paper-thin slices of Parma ham are ingeniously made of plastic dragon wings 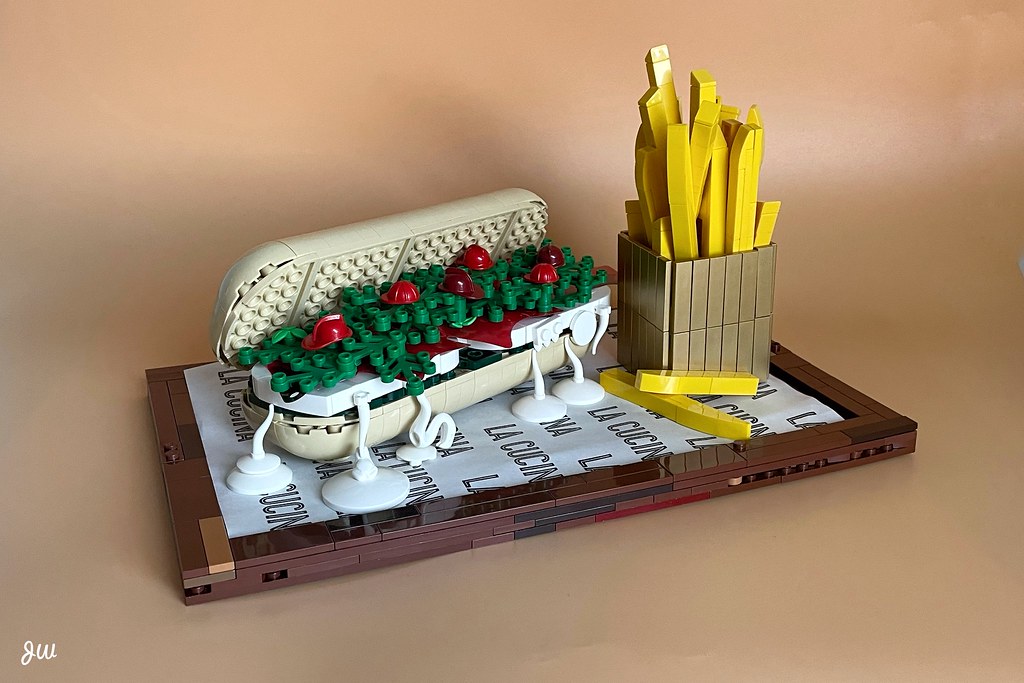 There are a lot of important questions facing the world right now. One that keeps coming up in particular is “Who’s hungry?” Steven Stelter has a suggestion: Maybe you should head to Culver’s for a burger and shake combo. This brick-built beauty beacons you from the highway to delight in the realistic ductwork on the roof, the colorful brickwork, and the custom stickers that ensure you know just where you’ll be blowing that diet of yours. 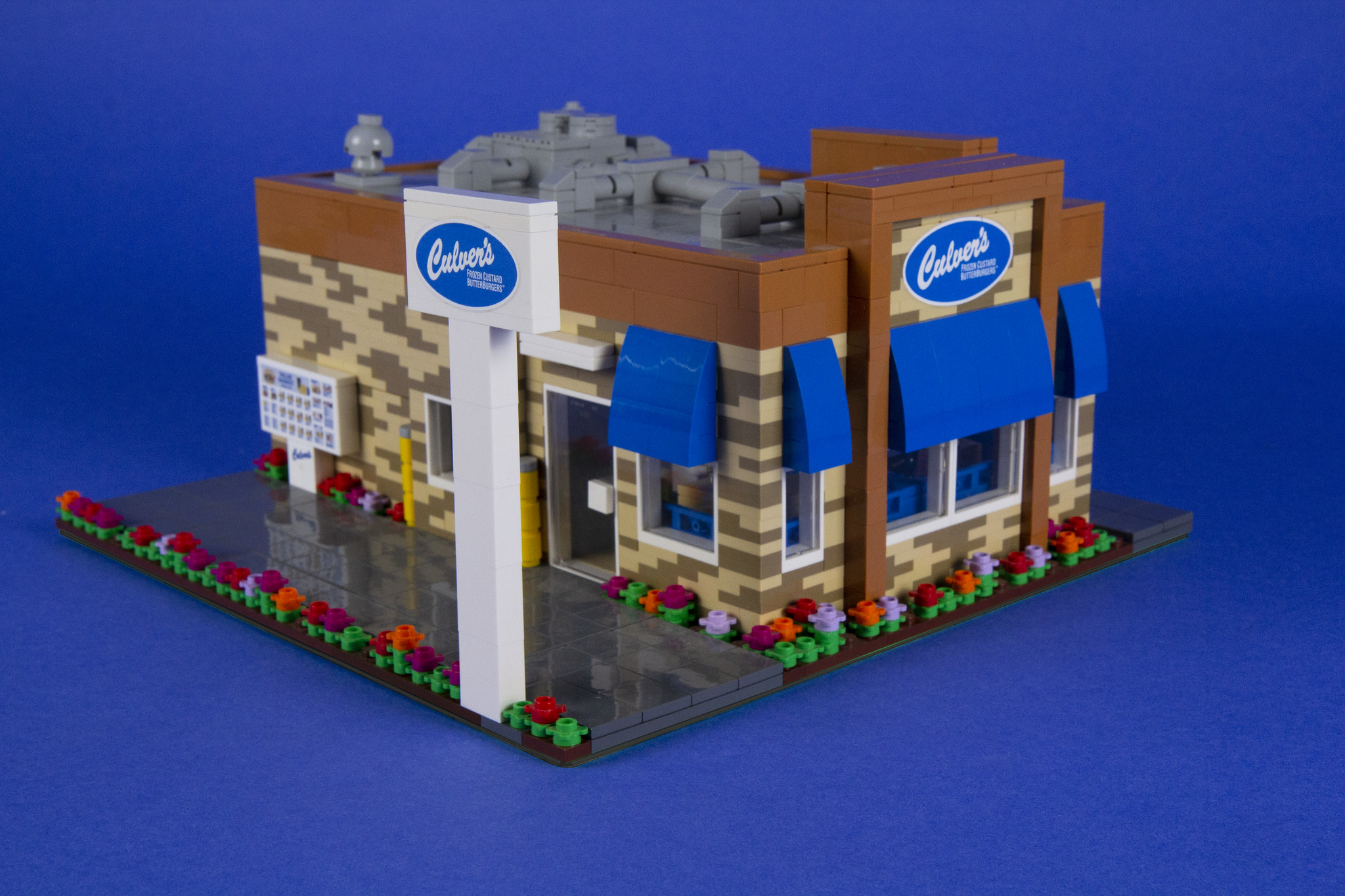 END_OF_DOCUMENT_TOKEN_TO_BE_REPLACED

This lovely LEGO diner on wheels comes from the mind of builder 1saac W. Known for their signature scrambled eggs, Moe’s Mobile Diner saves you the trouble of traveling all the way to the diner. Instead, the diner comes to you with those classic curves and stylings of 1960’s diners. The teal blue of the lower section of the mobile diner hearkens to the old upholstery of those diners. The silver grille parts in the front are nice touches for that more chrome, shiny looks of the utensils. The counter space has lovely rounded edges where you can sit and have your eggs while you chat with Moe. The slope pieces framing the kitchen window are slick, and so are those stools in front. And can you spot the cool use of the silver minifig roller-skate acting as a door handle? I think Moe is on to something with his mobile diner. 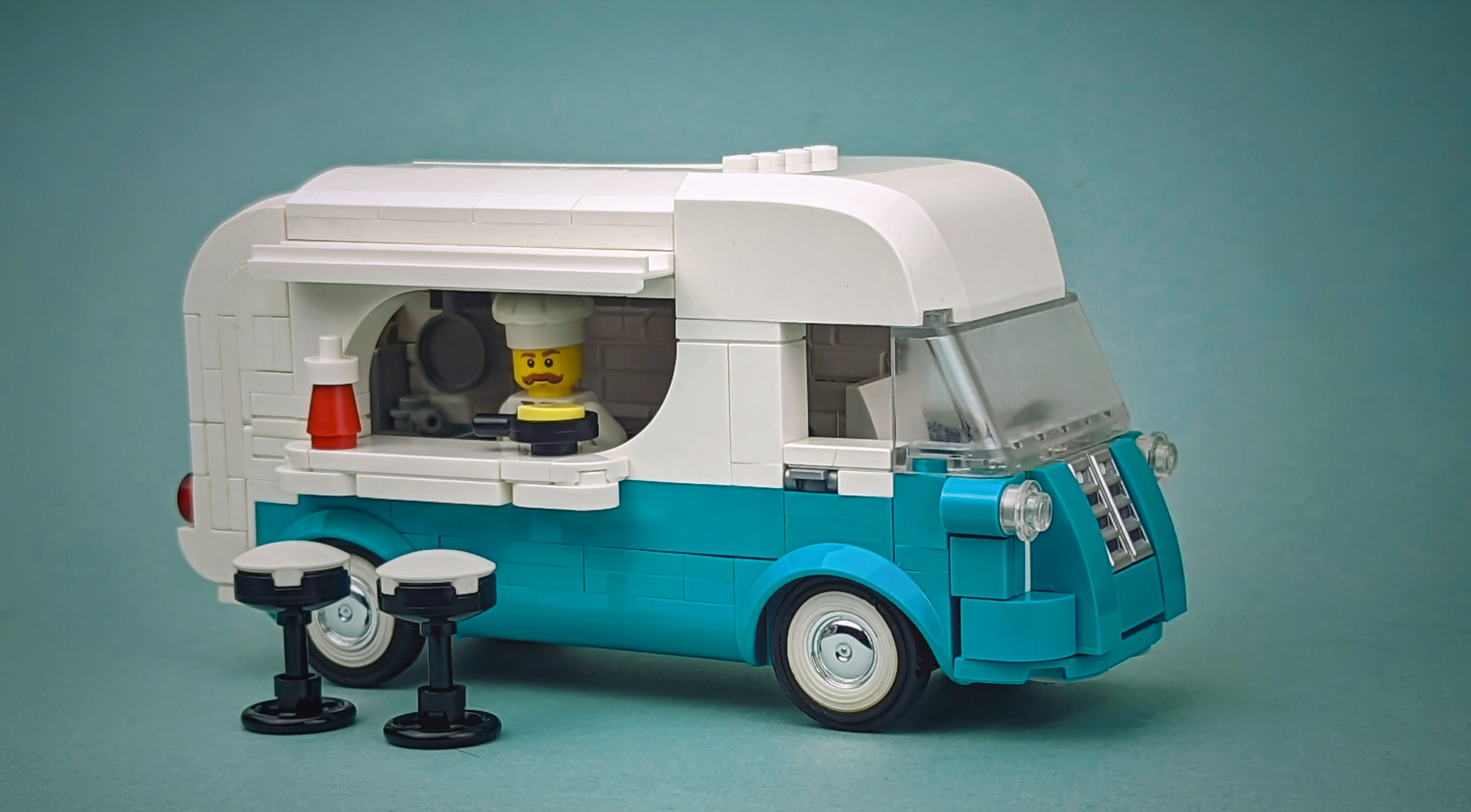 Stewart Lamb Cromar regularly delights us with his Fabuland creations. But his work has never made us this hungry before. To celebrate LEGO’s 90th anniversary, Stewart has crafted a layer cake large enough to be the party venue for these Fabuland mice. We can almost taste the numerous 1×1 round tiles acting as sprinkles, and the dozens of Unikitty tails subbing for piped icing…but, unfortunately, the mice are making us second guess having a slice. At least one of them is willing to vacuum up the crumbs. 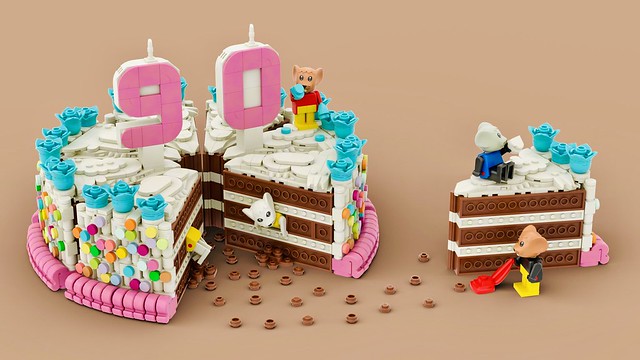 For a giant, bottom-feeding sea bug, these bright red crustaceans sure make for a tasty meal. Then again, a lot of things taste delicious covered in melted butter. Builder Joe of jnj_bricks takes us out for a nice lobster dinner but he’ll probably never call us again. Dated as an Anchorman reference may be, it seems apt given the shirtless Woody getting cozy in the bed of parsley. That’s some definite Ron Burgundy energy. Joe found quite a few uses for the red hexagonal plates with hinges that make up most of the crimson carapace. Beyond the boiled ocean insect, Joe built some delicious lemons for garnish as well as a nice slate serving plate, clever clamps, and a checkered napkin to clean up with during dinner. You might miss it if you don’t look carefully but there are couple actual Lobster pieces used near its mouth for a clever bit of added realism. 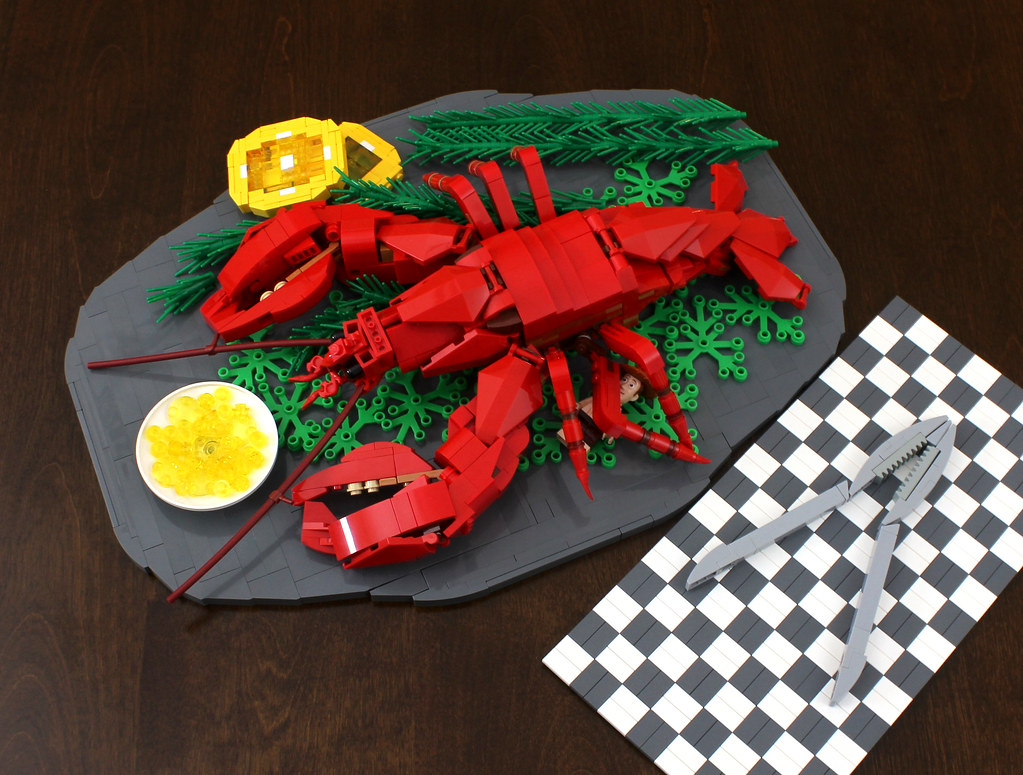 I can’t help but wonder if Joe wasn’t trying to make a surf and turf joke with this build. The lobster is on point but Woody is a bit of a stretch. I’ll give it to him since this was clearly a feat of clever organic building.

This soba noodle bowl looks so good it’s hard to believe it’s made of LEGO! This creation comes from builder John Snyder for the annual LEGO contest RogueOlympics hosted by Roguebricks. John started with an idea for how to build the radish slices, and the rest came together from there. Bicycle wheels inserted into inverted radar dishes comprise the bright radish slices. Arm pieces from the LEGO Friends toy line make up soba noodles, which is a pretty cool use of parts I haven’t seen before. Even the chopsticks are brick-built! Of course, part of what makes well-crafted food look so good is the plating, and John doesn’t disappoint. The color balancing stands out, allowing the eye to pass over each part of the soup in a wonderful flowing movement. I don’t know about you, but now I’m hungry! 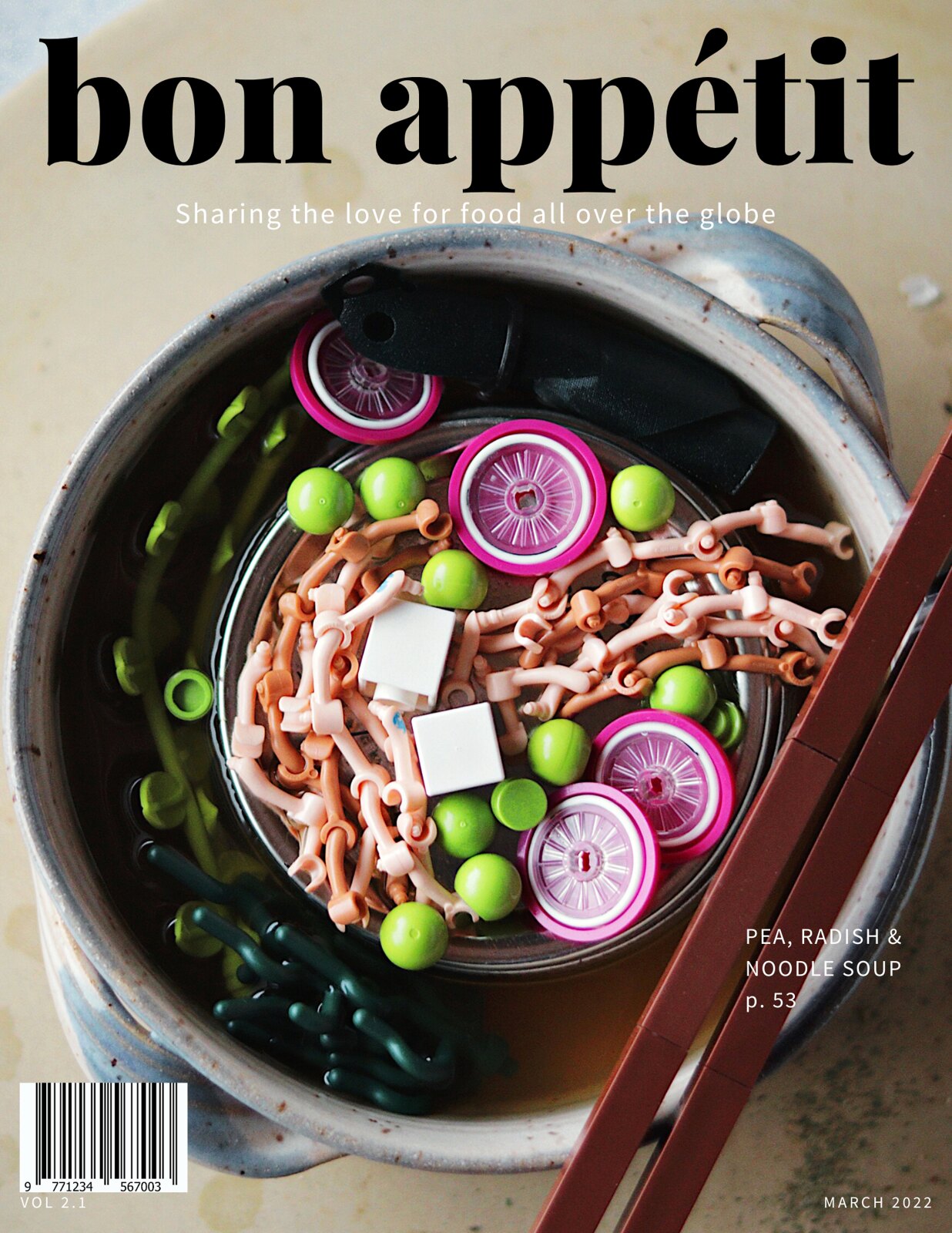 Building phenom porschecm2 has done it again, bringing us another splendid LEGO creation that shows his mastery of complex building techniques with this 1:1 scale replica of one of my favorite foods, macaroni and cheese. The use of the macaroni element is inspired and looks perfect for its role as macaroni here, and the choice of yellow helps sell the illusion. It’s unclear if the fork and bowl are brick-built, but even if this isn’t quite a purist creation we can all agree it’s a feast for the eyes. 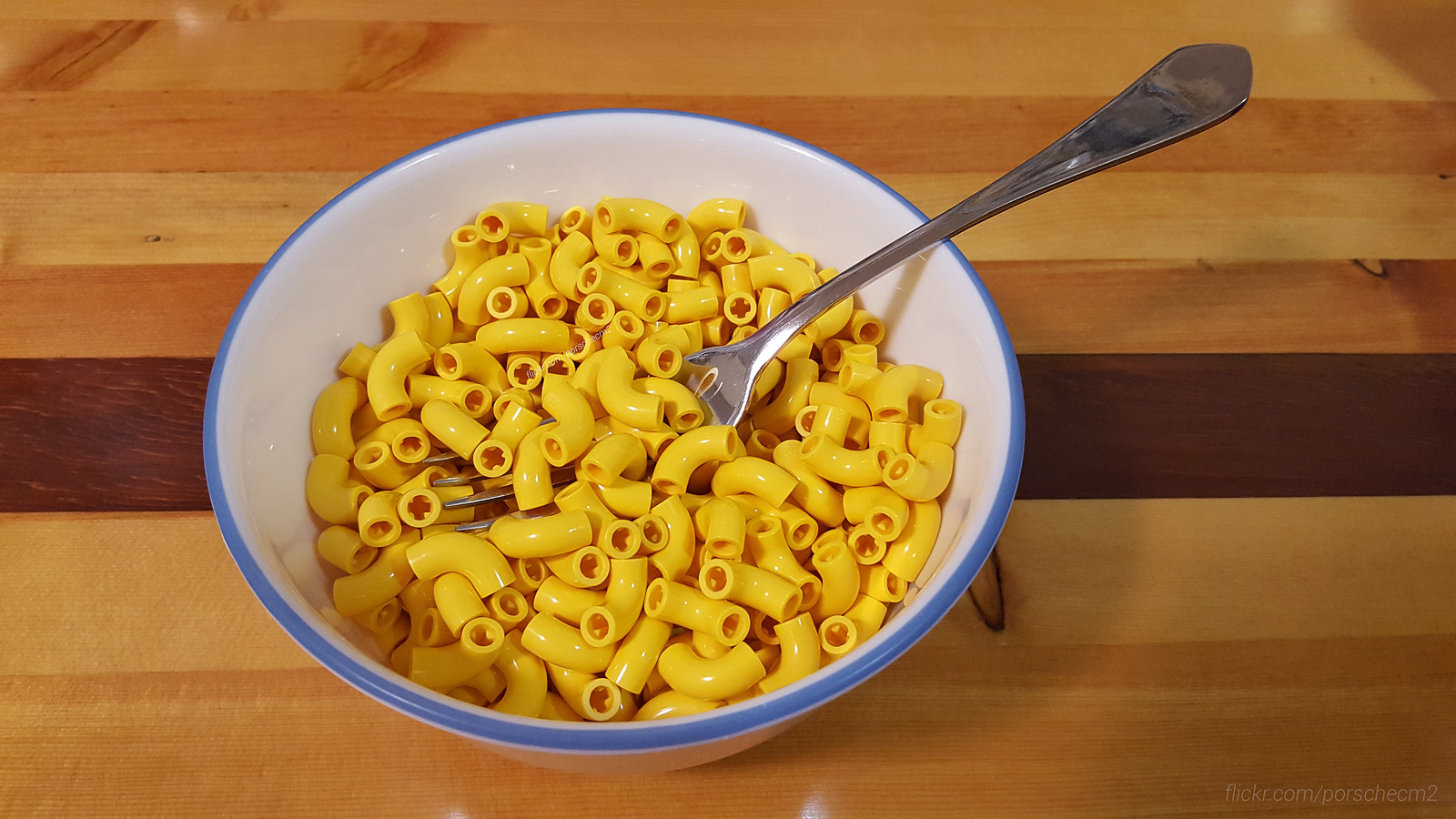 I wouldn’t advise taking a big bite out of this LEGO cake by Martin Gebert! This was built for a 101-piece challenge, and each of those hundred and one parts are used well. From white frogs and unikitty tails on the frosting to an obscure Scala flowerpot, this cake’s parts usage is pretty sweet! The layers of various chocolate and raspberry jelly filling look delicious and the flowing frosting tops it off wonderfully. And the cherry on top? It’s a dark red minifigure helmet. 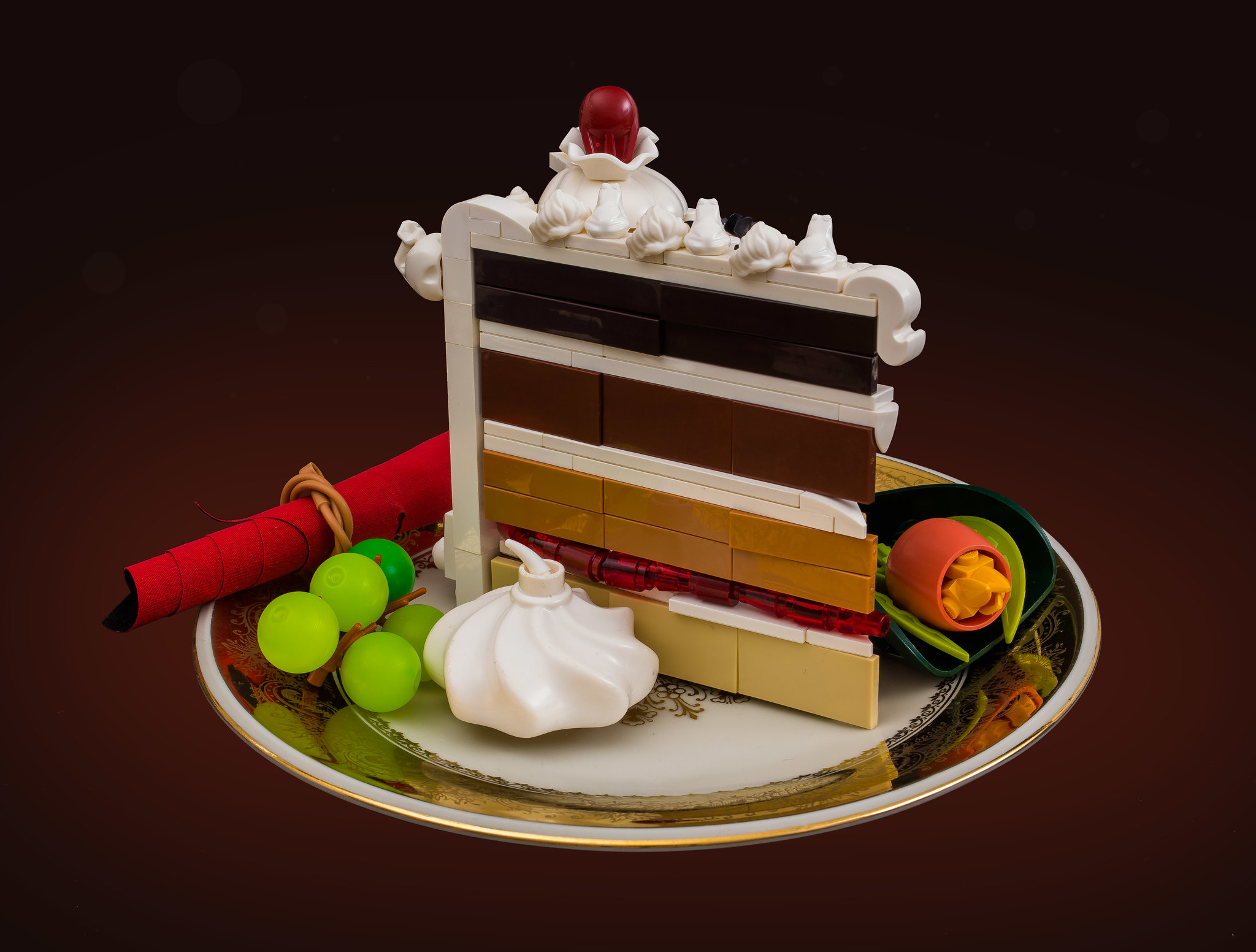 I’ve said before that the biggest political disagreement between my wife and me is that I see salsa as an excuse to devour tortilla chips. In contrast, she sees tortilla chips as merely a salsa delivery system. Today I am finally vindicated. Builder Loke has opened our eyes to the sadistic nature of tortilla chips. Look at the way they mock Mr. Avocado, smearing the remains of his friend across their bodies. It’s disgusting. They have to be stopped. I’m going to go eat as many tortilla chips as I can. I urge you to join me. Mr. Avocado, we’re doing it for you. 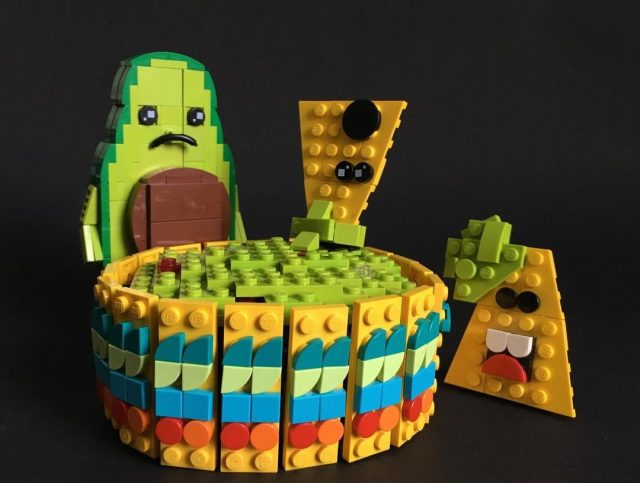 Feeling hungry? Vincent Kiew has created this delicious looking arrangement of fruits. A durian stars as the centre piece, with its spikey texture recreated by using 1×1 wedges placed at different angles. A slice of the fruit is also featured, demonstrating its yellow fleshy insides, squashed between a white border. The durian is complimented by a vibrant orange with translucent pieces representing its inner segments. Standing tall and proud, the watermelon slice is constructed out of angled wedges creating its conical portrayal. The purple fruit is possibly a mangosteen, due to its bulbous white centre portrayed by dome corner pieces. All the fruits have wonderful rounded forms which conveys Kiew’s skills in creating realistic shapes. 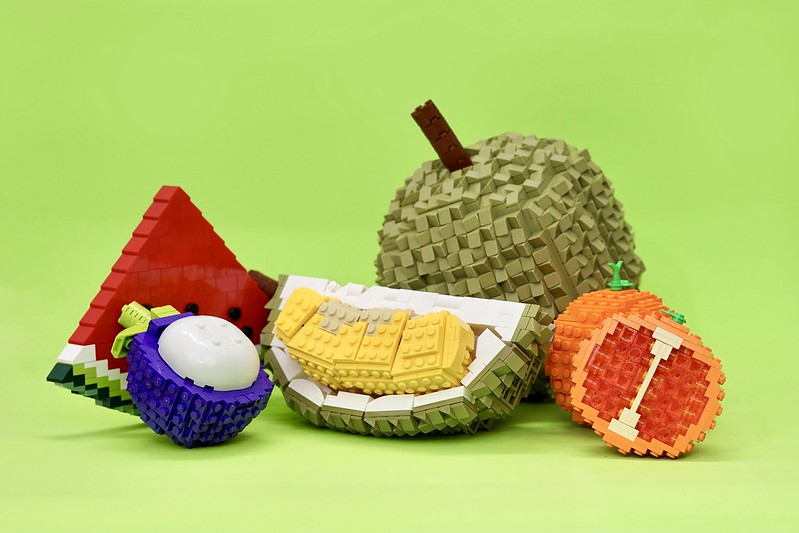 Let’s hope this LEGO durian smells better than a real life one, as the fruit is famous for its overwhelming odour. Still feeling peckish? Why not check out some of our other articles on tasty looking meals recreated in LEGO form.