From those that joined Finn and Jake for Adventure Time back in the day to those that are just discovering the magic memories of the distant lands of Ooo, the characters will always hold a special place in our hearts. Builder H.Y. Leung perfectly captured the look of the duo’s iconic companion, BMO. This little, imaginative robot blends contemplative, emotional moments with the reckless abandon of a child. This model captures BMO’s character design almost exactly, built at a scale that allows the proper proportions for practically every element. 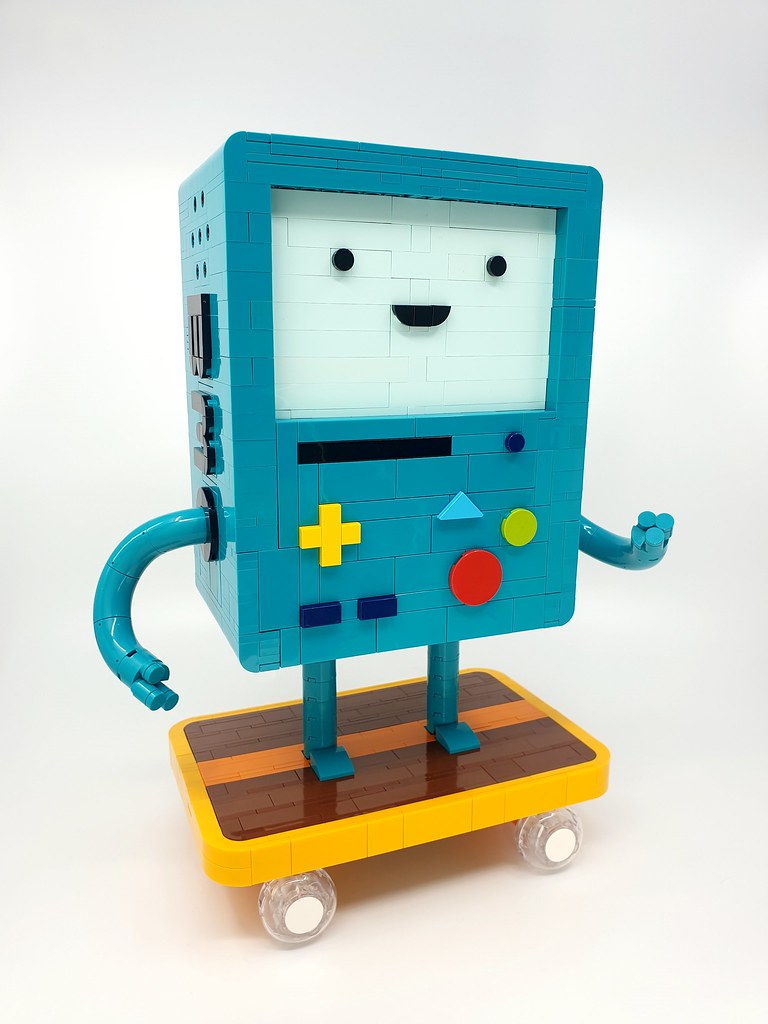 END_OF_DOCUMENT_TOKEN_TO_BE_REPLACED

If you think about it, the Super Mario universe is one of the only places where you want to go down the tubes. I mean, other than a water slide, where else can you find something fun at the end of a “plumbing” pipe? Perhaps this extra large (64×64 stud) pixleated pipe, built by H.Y. Leung, contains all the extra coins Mario could dream of. 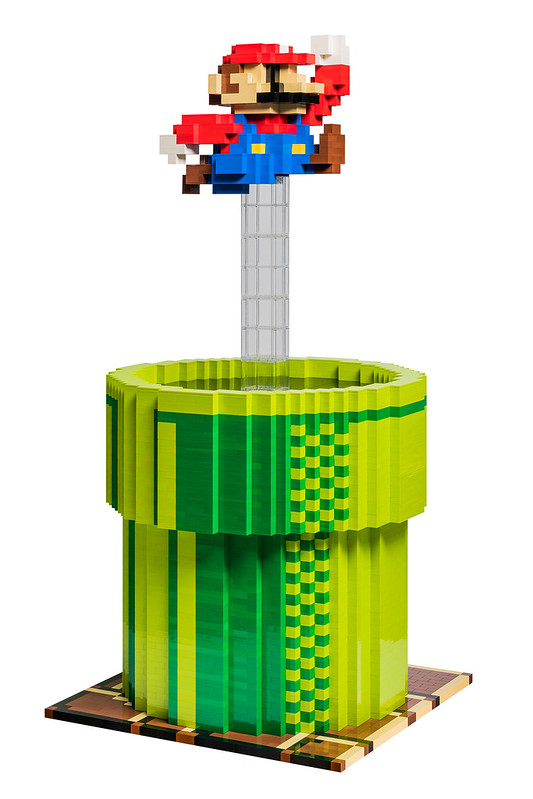 And don’t worry, he’s not going to be stuck in mid-air forever. This pipe contains an equally large mechanism inside to move him up and down.

If you’d like to see more of H.Y. Leung’s builds, be sure to check out our previous articles highlighting them.

It’s that time of year again, at least in the United States. Kids everywhere are getting to Target or Walmart and picking up folders, reams of loose-leaf paper, #2 pencils, pens, markers, crayons, Elmer’s glue, and everything else on the supplies list sent them by their new teacher. Builder H.Y. Leung brings us a timely series of builds, perfect for my kids to bring to their giant LEGO school. I say giant, because these are truly massive, despite how small they might seem at first glance. The ruler, for example, is not the mere 20cm that it indicates, but a whopping 195cm (or 77 inches – about three inches longer than I am tall)! Some clever studs-not-on-top (SNOT) work integrates the numbers and hash marks elegantly into the overall shape.

END_OF_DOCUMENT_TOKEN_TO_BE_REPLACED

We’ve seen excellent Walkman-themed LEGO models in the past, but this one by H.Y. Leung is an absolute cracker. The cassettes are beautifully put together, and the parts choice and shaping on the headphones are particularly good. The buttons on the tape player’s side are relatively simple, but accurate to the original piece of hardware. And, whilst the cable doesn’t appear to be “purist” LEGO building, its messy tangle adds immensely to the build. 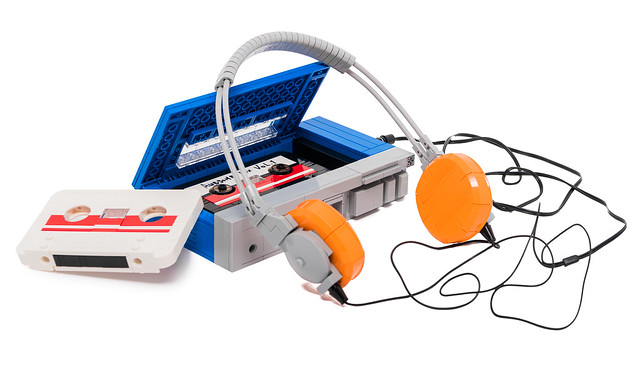 If you’ve spent any time in arcades, you’ve likely been tempted by those crane games where you can win a handful of candy (or sometimes bigger prizes). H.Y. Leung has taken that temptation to the extreme by making their own working version from LEGO bricks. 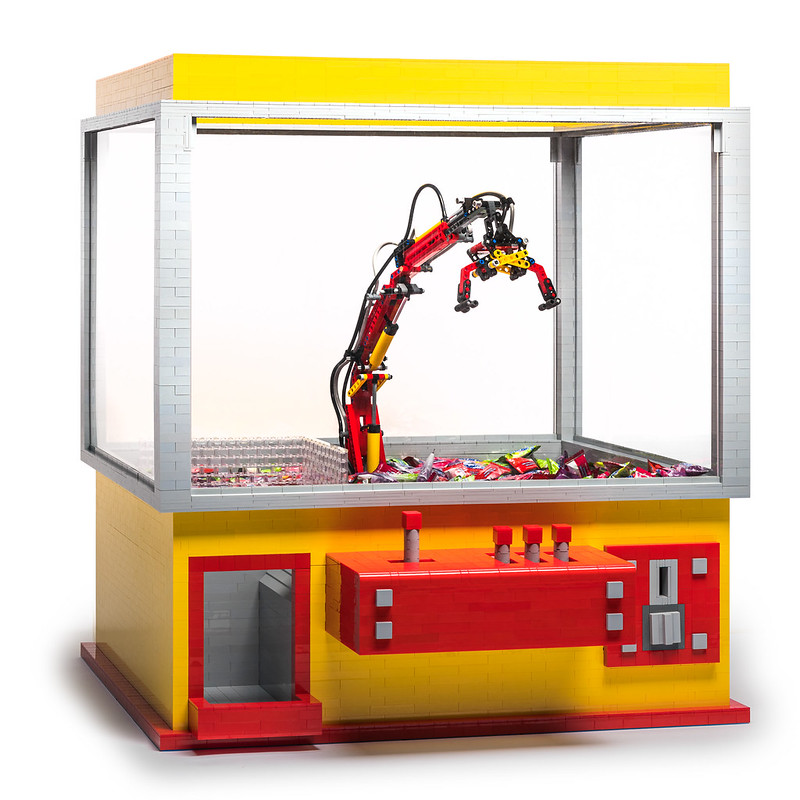 The base of this build is 80×64 studs (roughly 64×51 centimeters); pretty close to 1:1 scale to a real-world crane game. The arm design comes from LEGO set 42043, the Mercedes-Benz Arocs 3245, with a modified claw. The first control on the left side rotates the arm left and right, moving it through a 200-degree arc. The next three switches handle positioning of the boom and outrigger and opening and closing the claw. To the right of the controls is a slot that accepts tokens, and a switch to activate a pneumatically-controlled horizontal security bar, intended to keep people from reaching up and into the game when it’s not in use.

This claw-machine creation incorporates just a touch of non-LEGO parts in the custom plexiglass, external air compressor, and edible treats. I personally would have liked to see this machine filled with LEGO parts, but I suspect bulk candy is a lot cheaper to refill it with.

Speaking of arcade games, the colors are inspired by the prize machine in the mobile game Crossy Road. Not familiar with that machine? Happily, H.Y. has also recreated a LEGO version to add some context. I like the inversion of the red/yellow styling between the two games. 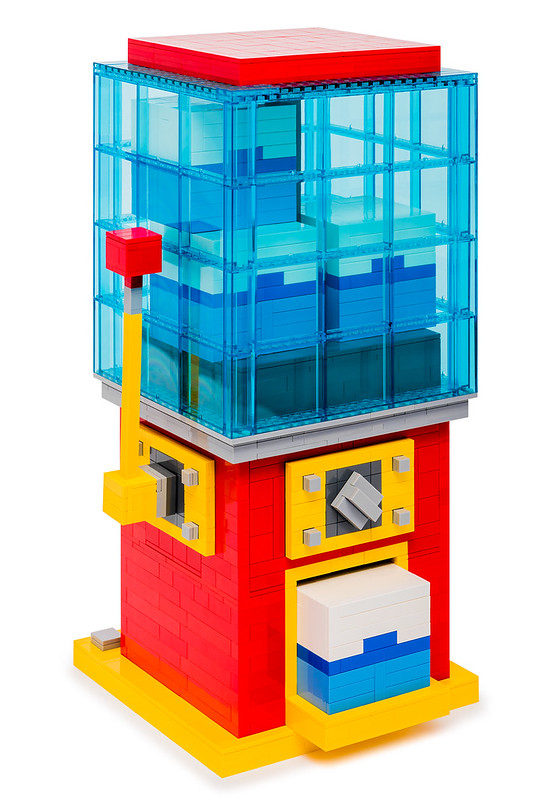