It’s a science fiction trope most of us are familiar with – the rumblings under the ground subside for just a moment. Then, suddenly, there’s an eruption and not only do you have have to deal with a an outflow of lava, but also the emergence of some truly terrifying underworld creatures. Bart De Dobbelaer captures just such an event in this stunning creation, aptly named Emergence. The beasts include some unusual part choices, including one of my absolute favorites elements – the X-Pod container.  But obviously they’re just part of the scene. The spewing lava is captured by a wealth of transparent orange elements, including Dimensions base discs. The techno-organic vent provides a great contrast to the mayhem elsewhere, while still adding a great deal of mechanical texture. And then Bart had to go and add lighting effects. Because if you’re going to build at this scale, you might as well go all in. 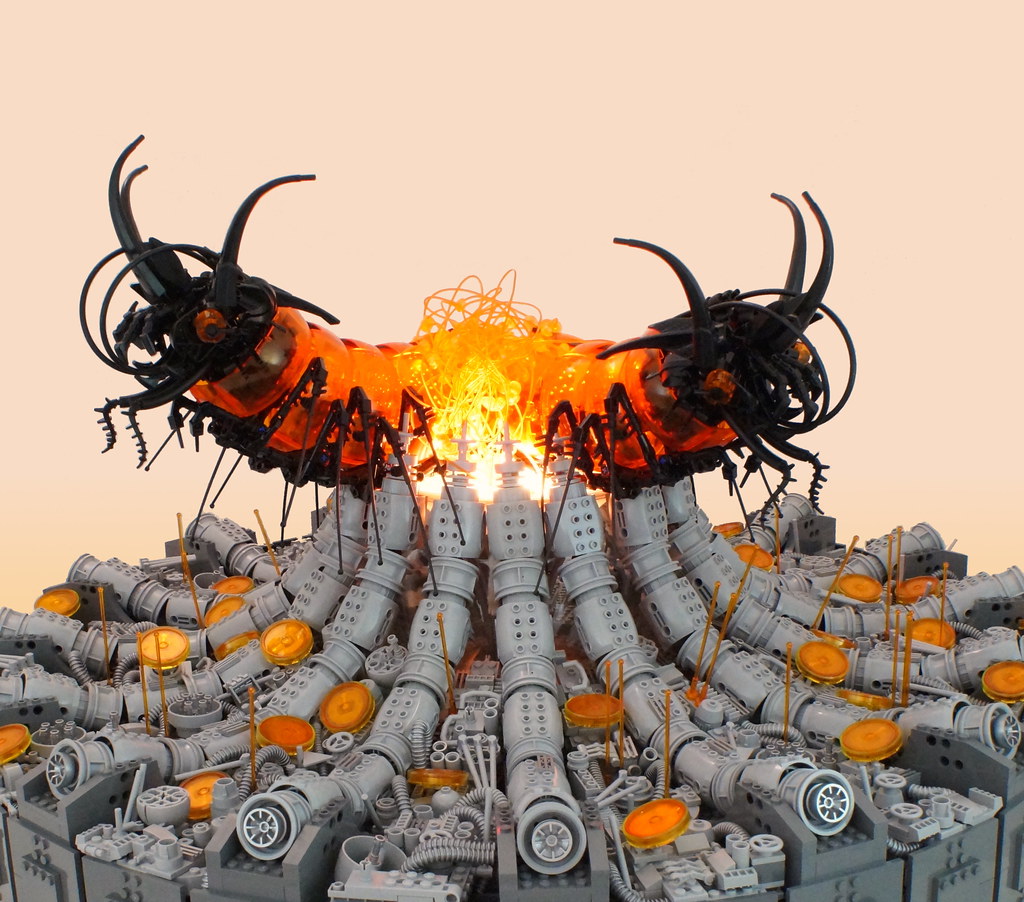 If you want some great contrasting color to this build, check out another of Bart’s creations: Trace Initiated.  Or maybe just peruse some great Sci-Fi builds from creators from around the globe.

Do you feel a need for speed? Are your competitors feeling hungry? Fix that speed craving and make your rivals eat your dust as you speed along in Oscar Cederwall‘s LEGO skitter vig.

Look at this speeder zip through the desert! It’s always great to see what sort of science fiction vehicles can be created, and this is no different. Using large blue pieces from buildable action figures was a clever idea, as was the decision to do an open cockpit. We’re able to see the figure, giving us a sense of scale with the dust clouds. Which, by the way, is probably my favorite part of this whole creation. I’m seeing how fast the driver is going and what kind of environment he’s in. This definitely shows Oscar’s talent!

The LEGO community has been on a big Tensegrity kick lately, and I for one couldn’t be happier. While the art-lover in me is fond of the abstract sculptural versions, there’s just something cool when builders combine the mind-bending physics with their own choice of theme. Carrier Lost has chosen to take things into the realm of science fiction with this Tensegrity Tank. The sleek design and neon highlights makes this feel like it was lifted directly from some TRON:Legacy concept art. Is it a stretch to label this as a new take on a “hovertank” as well? 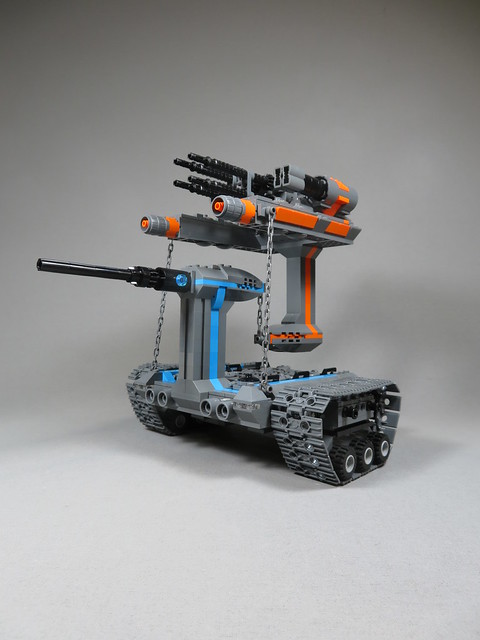 There’s nothing pretty about war, but Dane Erland finds a way to bring some strong visual interest to the concept. Based on a creepily organic inspiration, the Abyssal moves forward in a manner far removed from a standard tank. Instead of treads, six clusters of tentacles sprout from the undercarriage. Each is made of pneumatic hose aligned with 8-Tooth Technic gears, and finished off with an array of claws. The tan body has some nice curves and angles, and it bristles with a wide array of brick-built sensors and weapons. 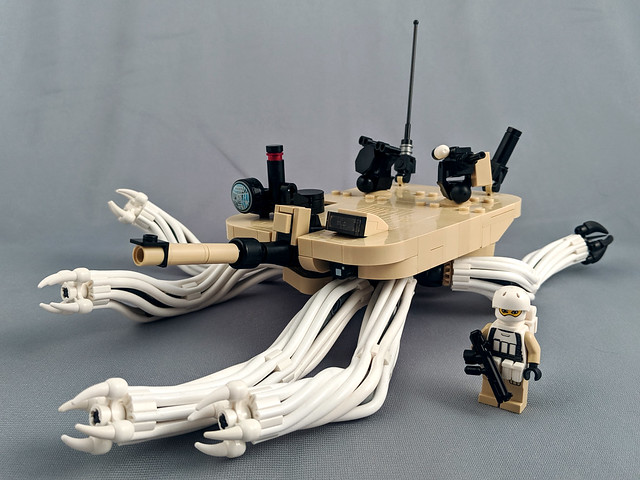 Is this a peek into the next stage of warfare? Maybe I’ll just stay indoors for the foreseeable future.

There are many ways to build curved forms from the humble brick – some more imaginative than others. Take a close look Didier Burtin’s Interplanetary Cruiser and you’ll spot a unique one. The interior docking station has a beautifully bowed shape, formed from two 32 x 16 blue baseplates held under tension. Despite the obvious frustration this must have caused Didier during the building phase, it was clearly worth it, giving his creation an unexpected and individual look. 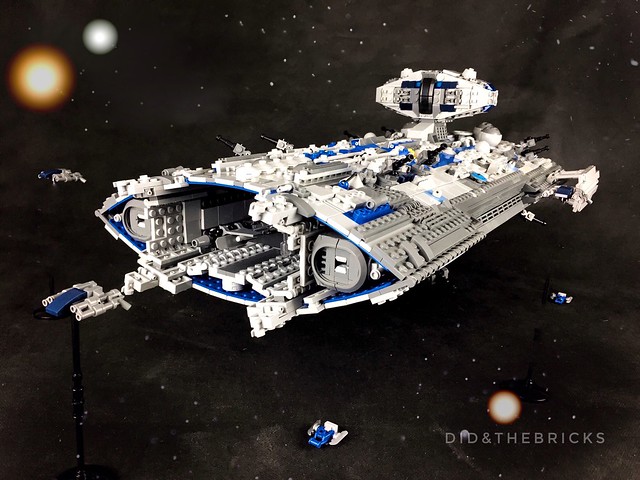 Viewed from the rear, not only do you see the lovely thrusters that you’d expect on a spaceship this size, but also further evidence of the builder’s skill. A range of visible hinged plates clearly show how the model’s structure absorbs the stress created by the flexed plates. 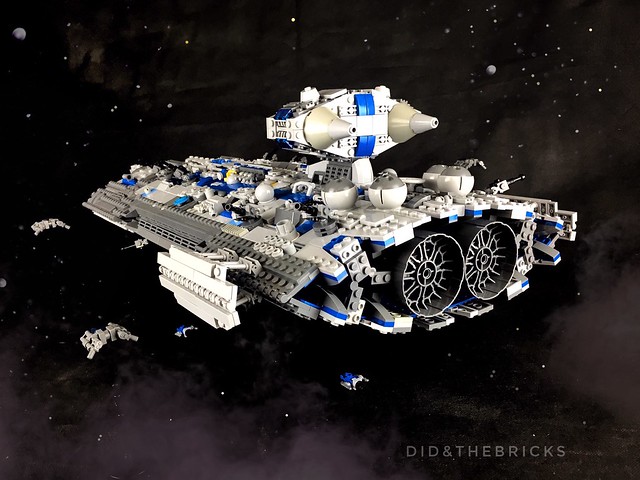 Swoosh! This flash of lime green has become one of my favorite LEGO speeders of all time. Builder Crsbyslsnateyng used an orange and green color pattern that is uncommon for most LEGO models, yet fits perfectly into his speeder bike. I admire the level of detail that makes the bike look like it has working components, particularly the fuel hose that connects to the engine. While not minifigure scale, the bike clearly gives the image that anyone can reach into the picture, sit down, step on the gas and zoom away. 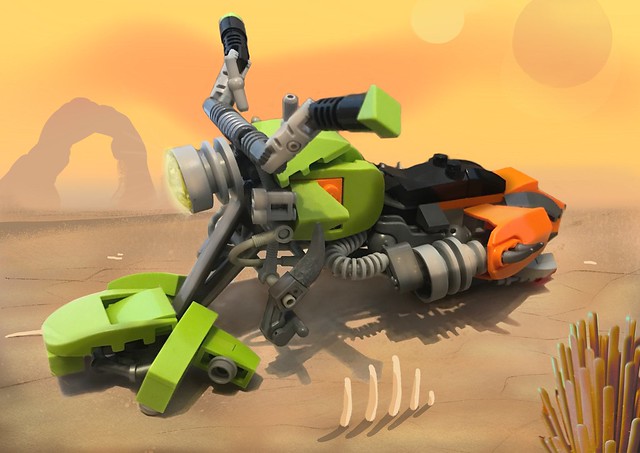