Like most hobbies, once you start to learn about LEGO you find that there can be a shocking amount of complexity behind just about every aspect. Sure, you can just sit back and enjoy the great photography and clever building that Faber Mandragore accomplished with Roadster Hot Rod. But let’s dig a little and peer into those murky depths. We can start out easy; the air filter in the car is a neck ruffle. An unusual choice, in that the element originated in the Collectible minifigure theme. Those sure look like steering wheels repurposed as the front wheel rims, inside tires introduced in 1959 and not produced since 1977. And is that a bucket handle forming the steering wheel? Each of these parts has a history in other sets and contexts that’s there if you want to go looking for it. 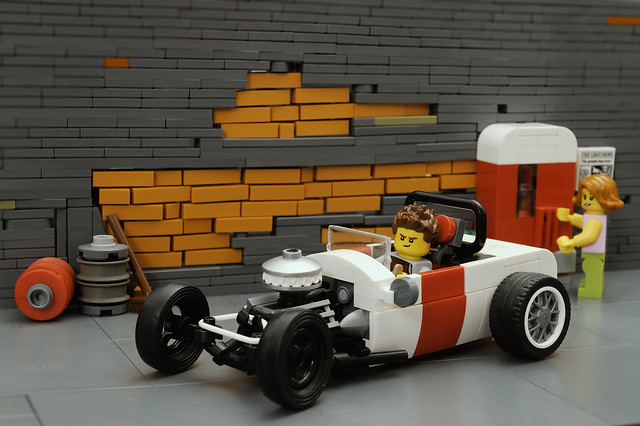 But the deepest cut of LEGO history? Those exposed orange-ish bricks in the background are Modulex. Those are tiny architectural planning bricks that LEGO spun off as a side line back in the 1960s. Incorporating them into a standard LEGO creation is never easy, but it’s done here in a seamless fashion. Well, neglecting that the seams between the bricks are what helps unify the whole wall, anyway. *sigh* You know what I mean.

LEGO mechs come in all shapes and sizes. From stompy to stealthy, from massive to minuscule, and everything in between. This 6-legged mech by Oscar Cederwall was inspired by the latest craze in mech-building, which comes in the form of a design constraint introduced by Andrew Lee where the mech must be shorter than 9 bricks. 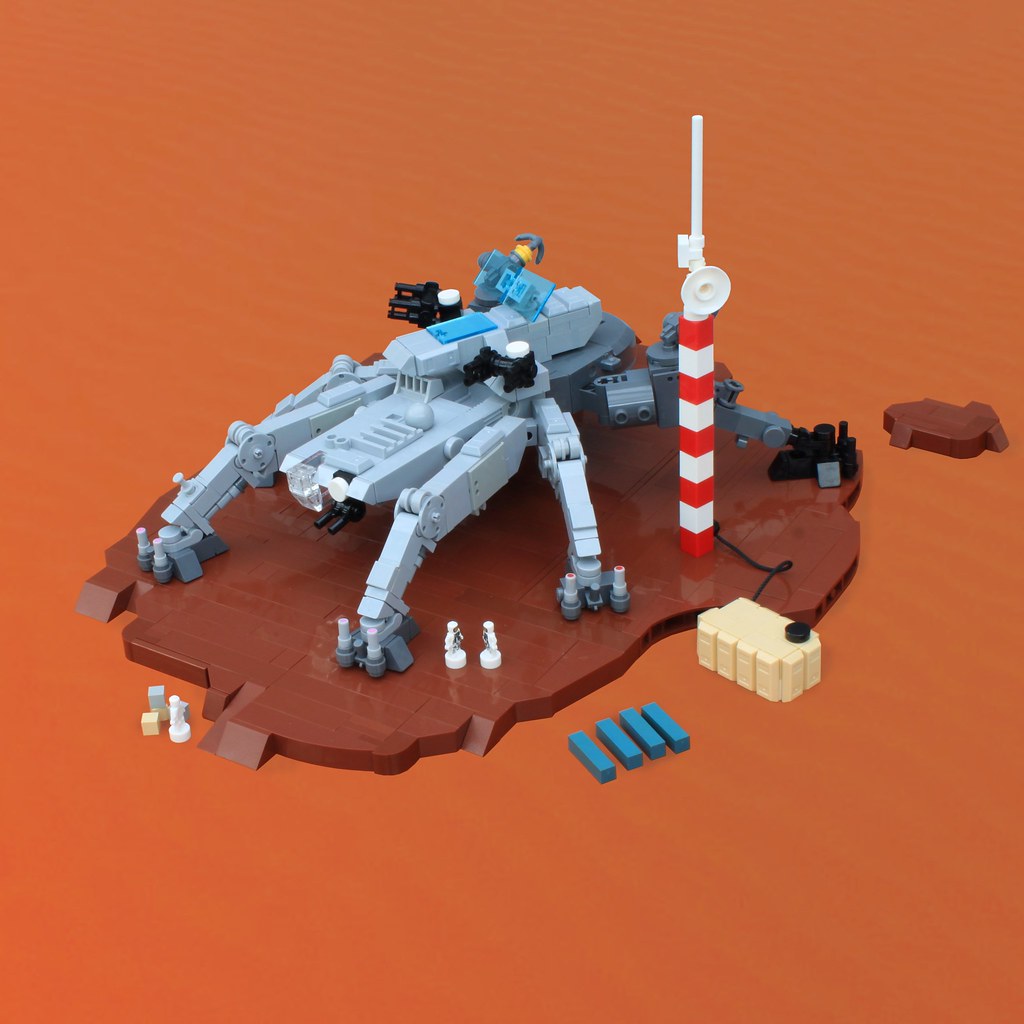 This mech stands on its own, with some great part usages, including a number of minifig cabinet doors attached by inserting the handle into various parts. The leg joint made up of the tops of a turntable provides great details, and don’t miss the blue Modulex elements as supply crates. I do appreciate the subtle inclusion of a 9-brick radio tower, and I really like the base made with a variety of sloped and curved bricks built sideways.

When taking a deep dive into LEGO history, you’re bound to run into Modulex – a spin-off line from LEGO started in 1963. Designed for architectural planning, these tiny bricks can be hard to come by–but they certainly do work well to create images of the workplace. Elspeth De Montes noticed two of the human figures in this classic line were also very reminiscent of another classic series. Naming this image Good Morning Moneypenny transforms this well-built office into a tiny slice of life from a James Bond film. 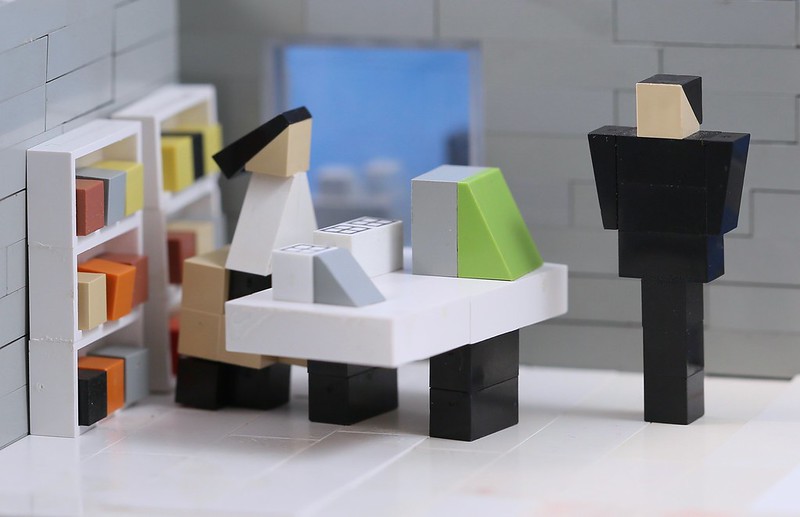 My favorite detail is Moneypenny’s computer. I’m certain the Modulex team didn’t have a desktop workstation in mind when they made those parts!

Ryan H. (eldeeem) built an entire SHIP out of Modulex, which are smaller sized building bricks by The LEGO Group in the 1960s. Since the model spans over 100 studs, it qualifies for the definition of a SHIP, but it is only about 60% the size of a similar ship made out of regular Lego bricks. 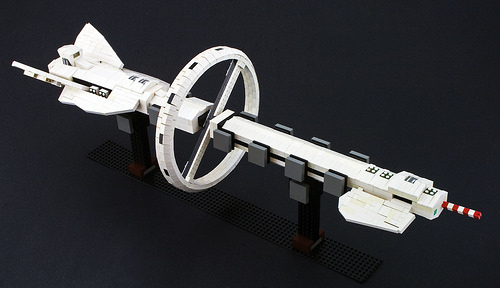 The sheer scale of all the dioramas we’ve featured today calls for a tiny chaser — just something different. Modulex is as different as you can get, so here’s a lovely lighthouse built by Carson Hart. 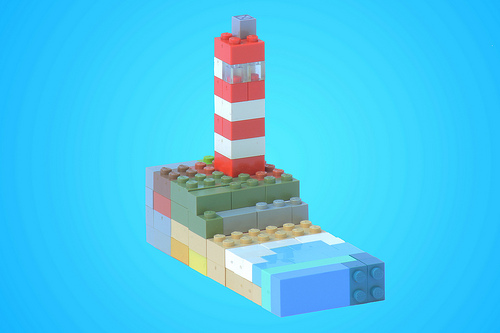 Modulex has a fairly limited palette compared to SYSTEM bricks, so the sand under the water and the printed piece on top of the lighthouse are particularly excellent details.

Eurobricks is holding a Micro Sci-Fi Contest this month (the trophies themselves are noteworthy examples of the genre), and at mid-month we’re already starting to see some really nice entries.

Ryan H. (eldeeem) enters the fray with this gorgeous biodome on an ice planet, complete with a resupply ship hovering above. 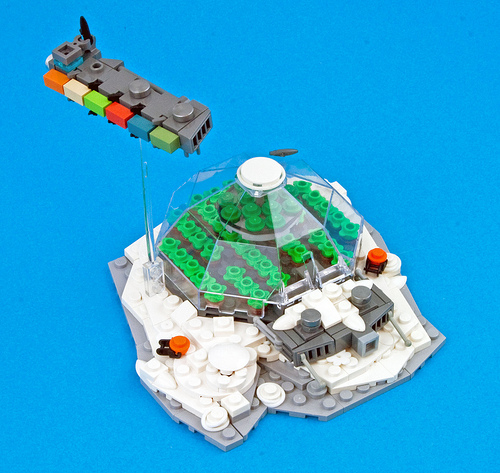 Notice the Modulex bits attached to the side of the freighter as containers. LEGO produced Modulex as a tool for architects in the 60’s until they spun off the company in 1965. Early Modulex bricks even have the LEGO logo on the studs, just like System bricks.

Over the years, LEGO builders have figured out various connections between the two systems (officially not compatible with each other), and Ryan has collected all of the ones he’s aware of in the following photo: 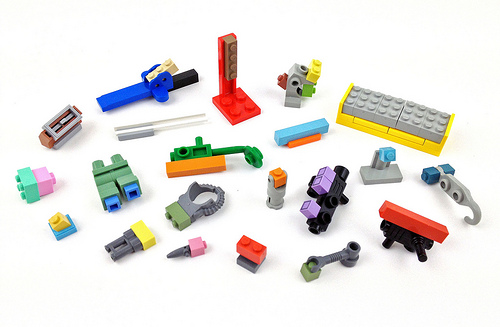 Post-LEGO Modulex with an M logo continued to be available until fairly recently (the company is a successful signage company today), and it’s always interesting to see what new ways LEGO builders incorporate them into their models. 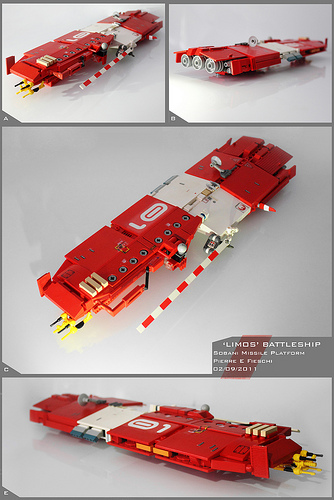 This gorgeous mosaic of Tolkien’s Doors of Durin is simply incredible. Karyn did a wonderful job of capturing the look and feel of the doors. On top of that, the whole thing is done with Modulex. As far as I can tell, this is only the second time we have highlighted a Modulex build here on The Brothers Brick (See the first one here). 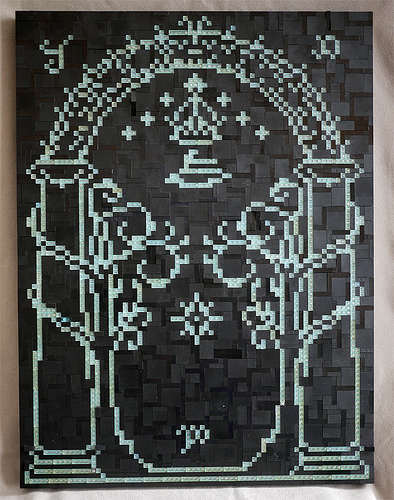 The builder has also created a blog, called MiniBricks Madness, to highlight these lesser known siblings of the bricks we all know and love. For a history of Modulex, check out this article, “Saving Modulex” by Sly Owl.

Many thanks to Bruce for bringing this to our attention. 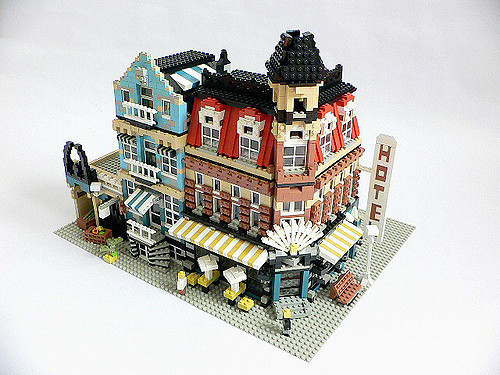 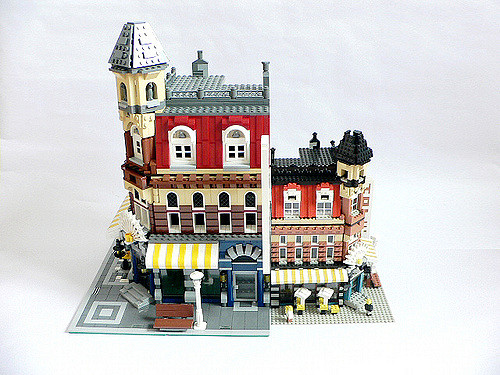