LEGO has produced numerous sets with the blacksmith as subject. I have fond memories of really wanting (and not getting) the LEGO 3739 Blacksmith Shop. And now, after years and years, LEGO released the 21325 Medieval Blacksmith – a set that I most likely will also not be getting. This creation by Mbricks also sparks the same amount of joy. There are a lot of cleverly used parts in this set. For instance we get umbrellas used as door hinges. Treasure chest lids used to create a round bay window. Skirts are used as a chimney and the half circle tiles work perfectly as roof tiles. One of the things that makes this creation just work is the height difference in the buildings. This creates different levels to the build, each one with something interesting for the eye to behold. 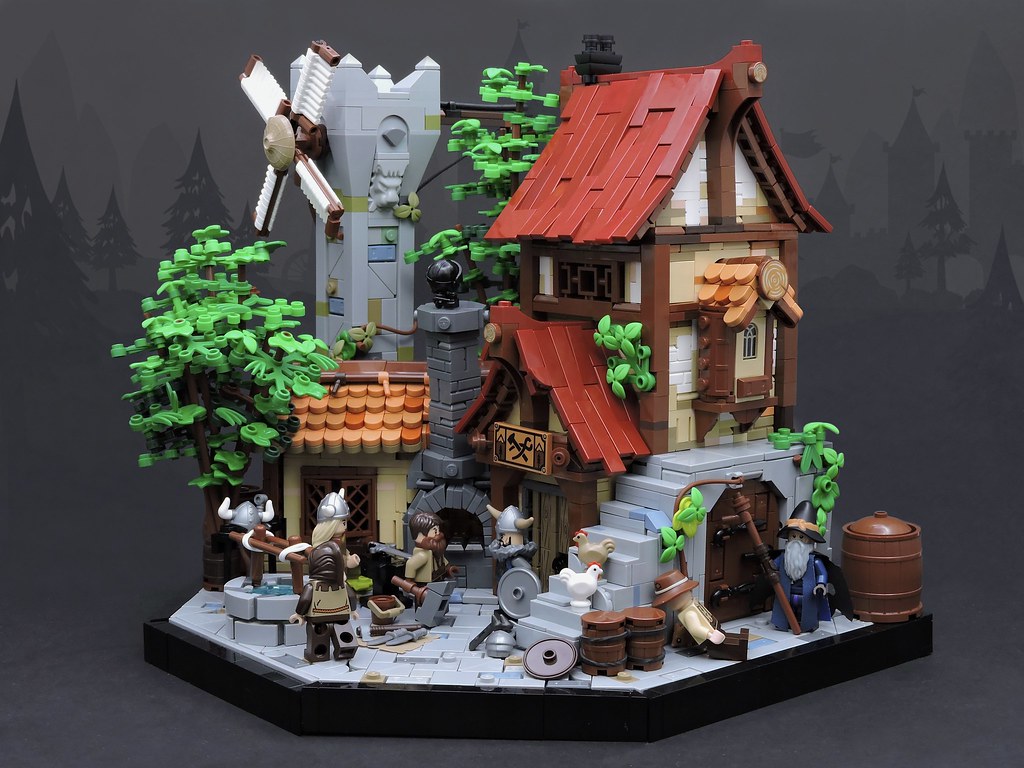 Texture is the name of the game in this blacksmith scene by LEGO Master Andreas Lenander. We can see the worn stone of the walls of the smithy, the rough grain of the wood beams holding up the room’s roof, and a floor cobbled with round tiles of various sizes. Small details like the chains hanging from the ceiling and the tools leaning up against the walls add to the vignette. But Tashk’il is the star of the show, slowly manipulating hot steel with his smithing hammer. The work on the figure is impressive, relying heavily on the 1×2 ingot tile and the 1×1 plate with bar to properly express the muscle and concentration being applied to that sword. 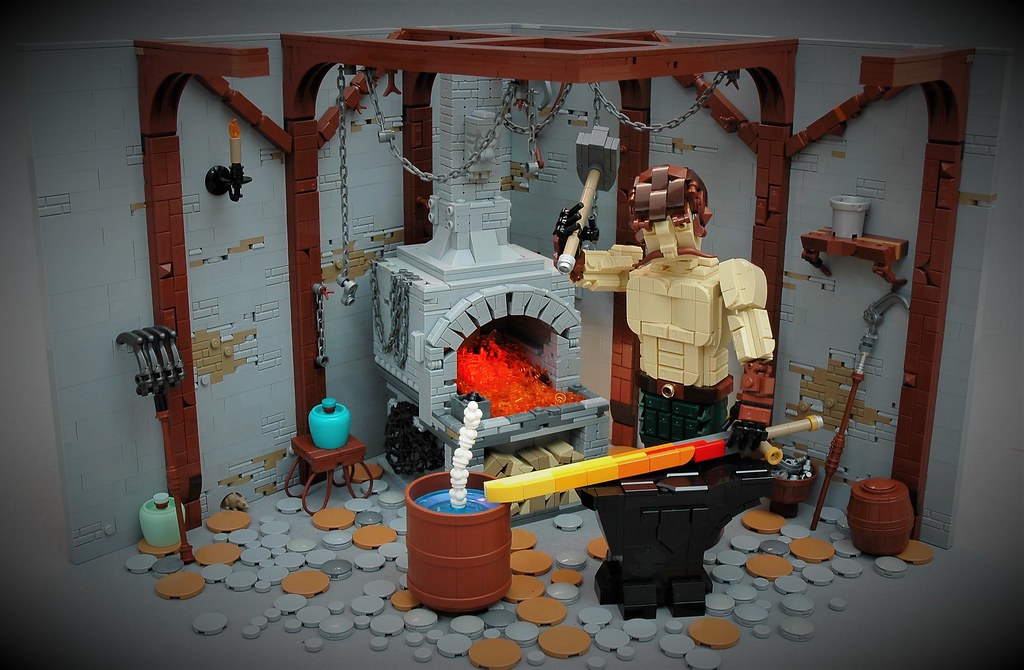 LEGO builder AfroEngineer enjoys 21325 Medieval Blacksmith Ideas set so much he created this lovely Tudor House as a companion piece. The bright color palette draws the eye into the build, particularly the blues. The light blue of the house’s second story is a great choice! It contrasts nicely with the brown detailing and the gold windows. The roof tiles are created with the help of overlapping minifigure seats. The overhanging vines and the gaps in the roof tiles lend a weathered, lived-in feeling to the home. 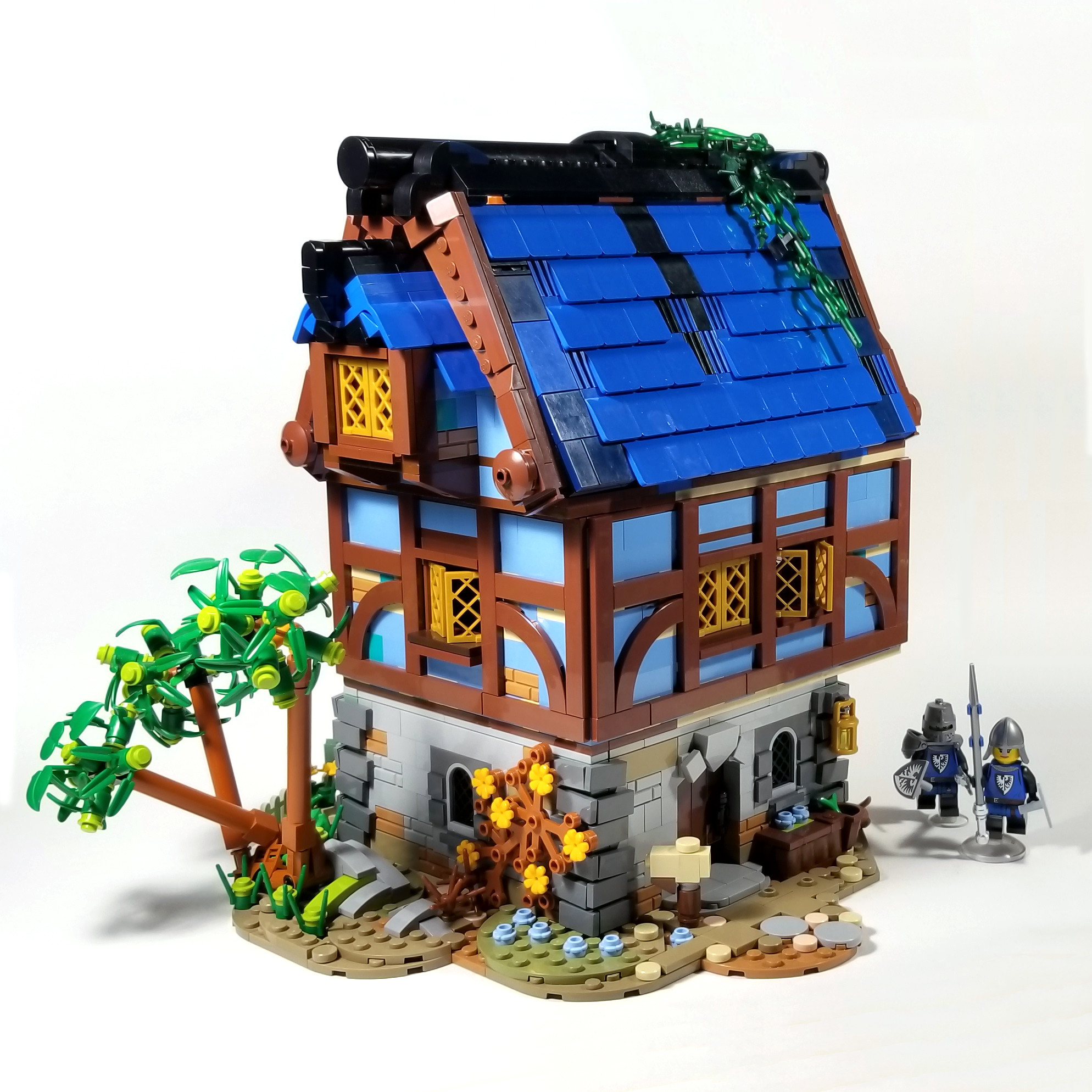 The interiors of the house are just as amazing as the outside, too. They feature great brick-built furniture and homey decorations that speak to the lives of the residents. I like to imagine they’re mapmakers and end up on all sorts of wild adventures! They probably have the blacksmith watch the house while they’re away. 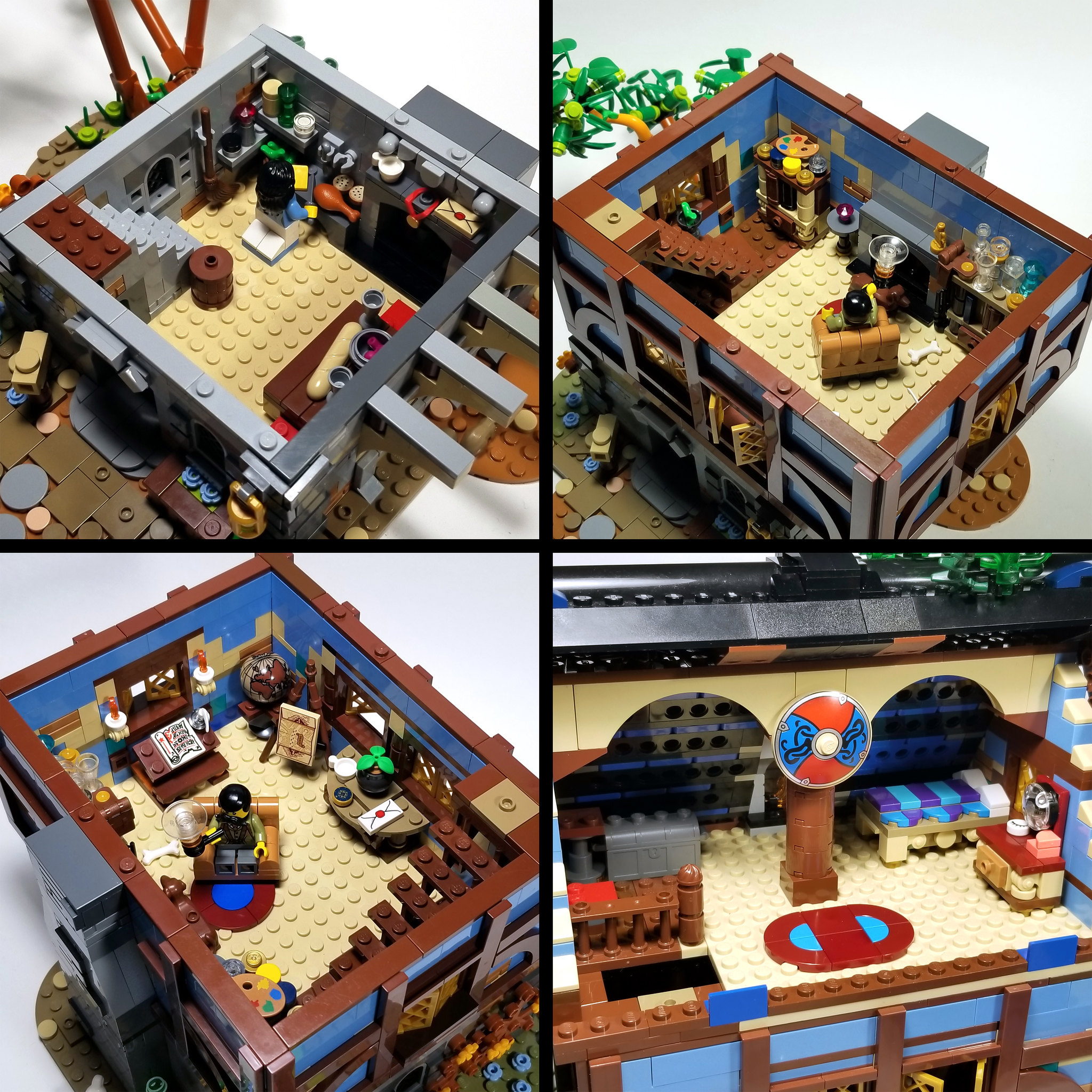 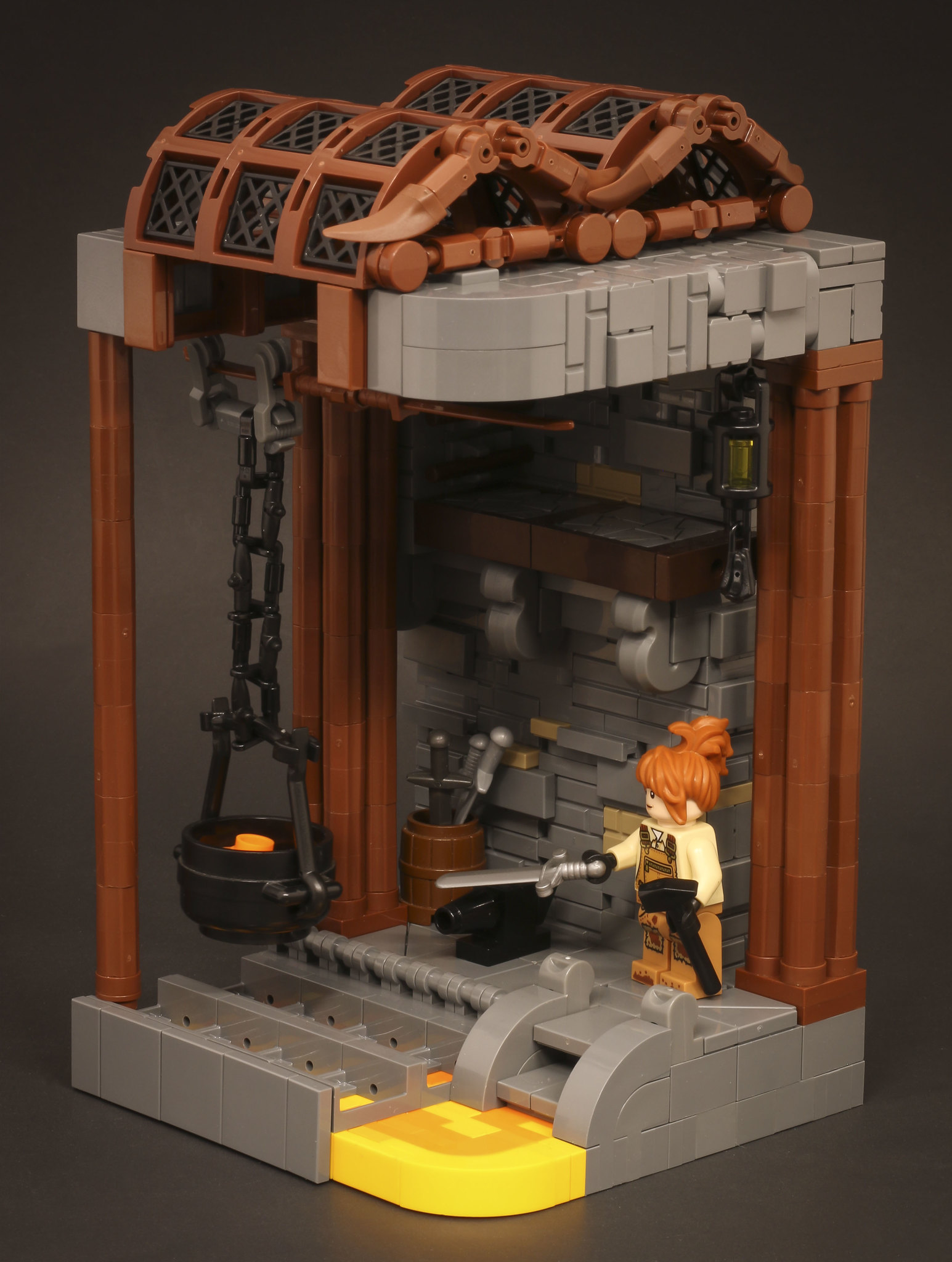 Versteinerts creation looks like there is an excellent blacksmith in town. You can tell by all the fittings on the door in the attic and the iron sign near the tavern’s entrance. For the fittings on the door Versteinert used the tooth plate which to me is just perfect. For the tavern sign, a couple of parts were used in a smart way. The fence is hung upside down using the round plate with handle in black (which apparently exists). The plant stem with thorns as an ornate element of the sign is a very nice touch. 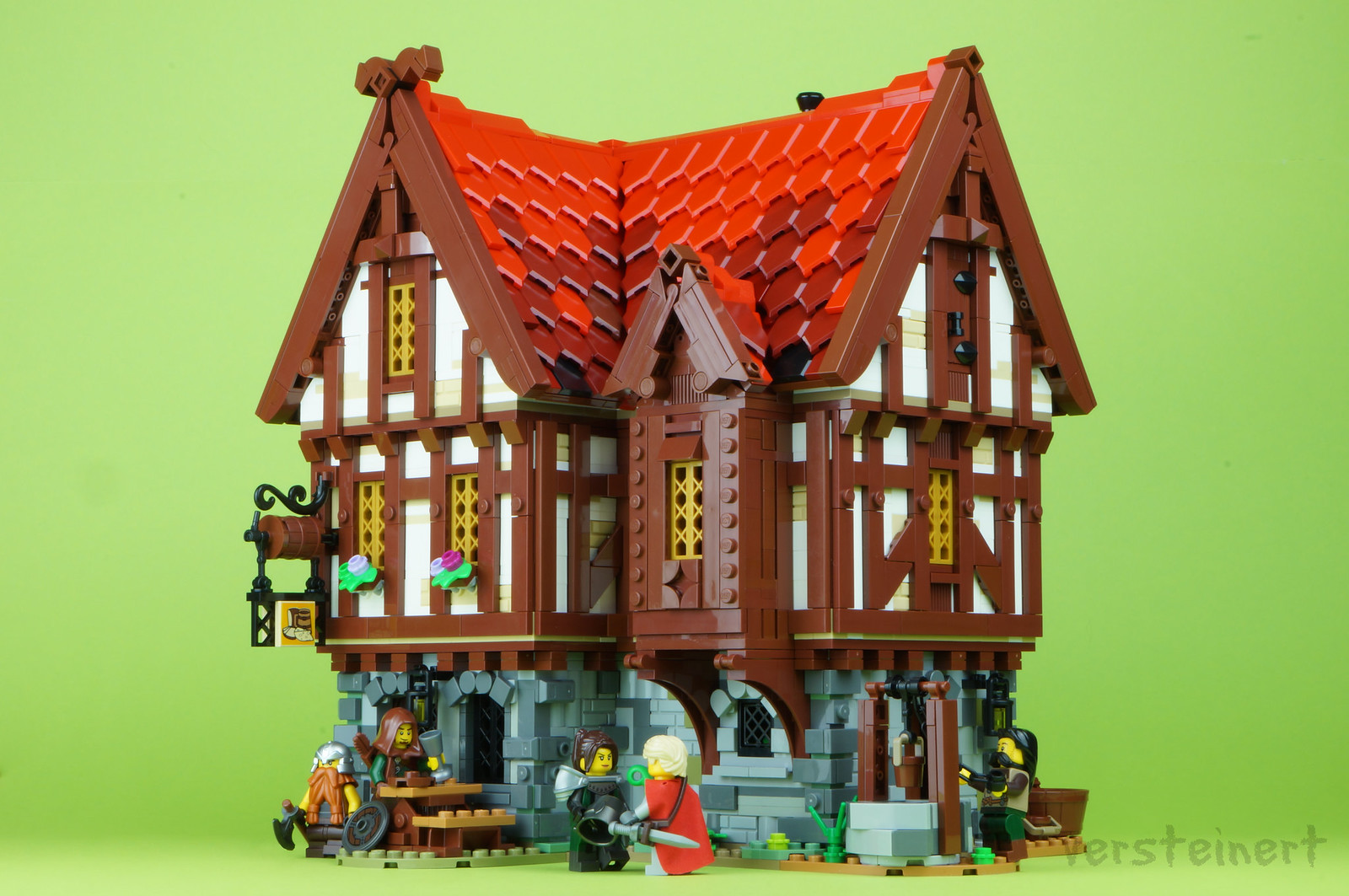 The rest of the building looks amazing as well. The walls have a cobblestone look going on, which is achieved using a lot of different plates and tiles. The gold fence windows make the tavern look really fancy. Using the same roof technique as the Medieval Blacksmith makes it blend in really nice with the original set. The best thing about this creation is that it is designed as a modular building and is fully furnished on the inside. The upper floors and the two roof sections can be easily removed to gain access to the building’s interior.

LEGO has continued to diversify the products that it sources and launches via its LEGO Ideas platform, which for many years has been perceived as focusing on licensed themes like Ghostbusters, Doctor Who, Voltron, and so on. But increasingly, LEGO has approved wholly original designs, such as 21310 Old Fishing Store. Yesterday, LEGO officially revealed 21325 Medieval Blacksmith, an original design by LEGO fan designer Clemens Fiedler. The set includes 2,164 pieces with 4 minifigures, and will become available on February 1st, 2020 at a price of US $149.99 | CAN $199.99 | UK £134.99.. 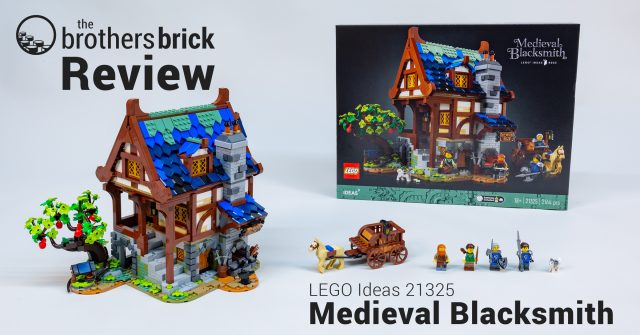 END_OF_DOCUMENT_TOKEN_TO_BE_REPLACED

Growing up in the 1990s, one of the things that made LEGO castle sets so appealing was the way in which they were advertised; catalog images were perfect at world-building, with sets placed within carefully crafted, colorful environments. Robbadopdop‘s blacksmith shop evokes those fond memories, and his attention to detail would have impressed my 8-year-old self ten times over. There’s plenty of clever parts usage to appreciate here, including a minifigure ruff for flower petals, hair representing the end of a mop, and disposable sprues from plants with 3 large leaves for green vines winding up the side of the building. The building itself employs an excellent use of color and utilizes a diverse range of parts, which helps it feel both gritty and fun to look at. 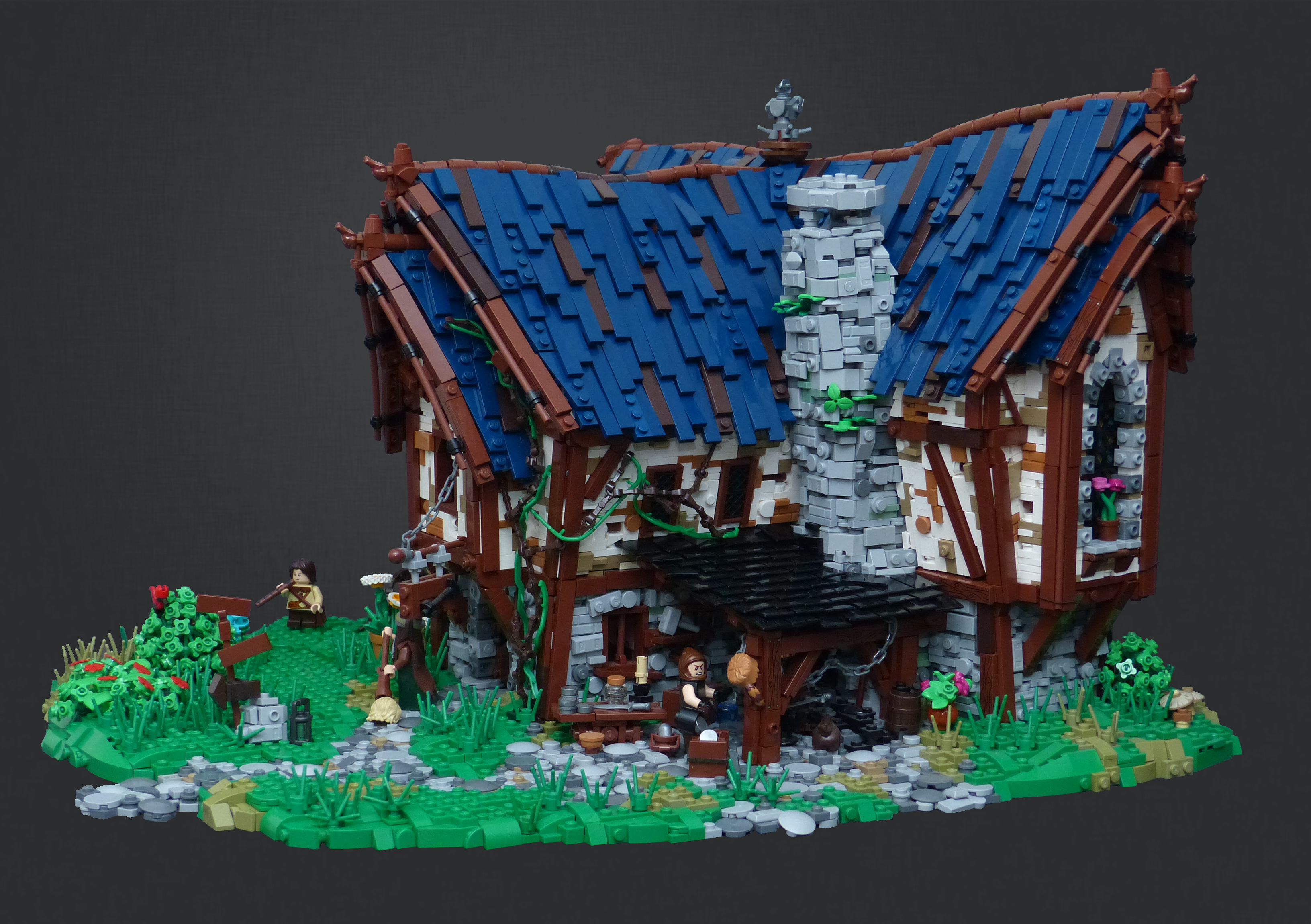 One of the coolest details is the way the roof flexes, complete with staggered shingles. If you’re wondering how this detail was achieved, Robbadopdop has shared pictures of the internal structure. He used rigid tubing, which can be easily cut to size and is flexible enough to shape, and the roofing was then draped into place. The end result is fantastic. 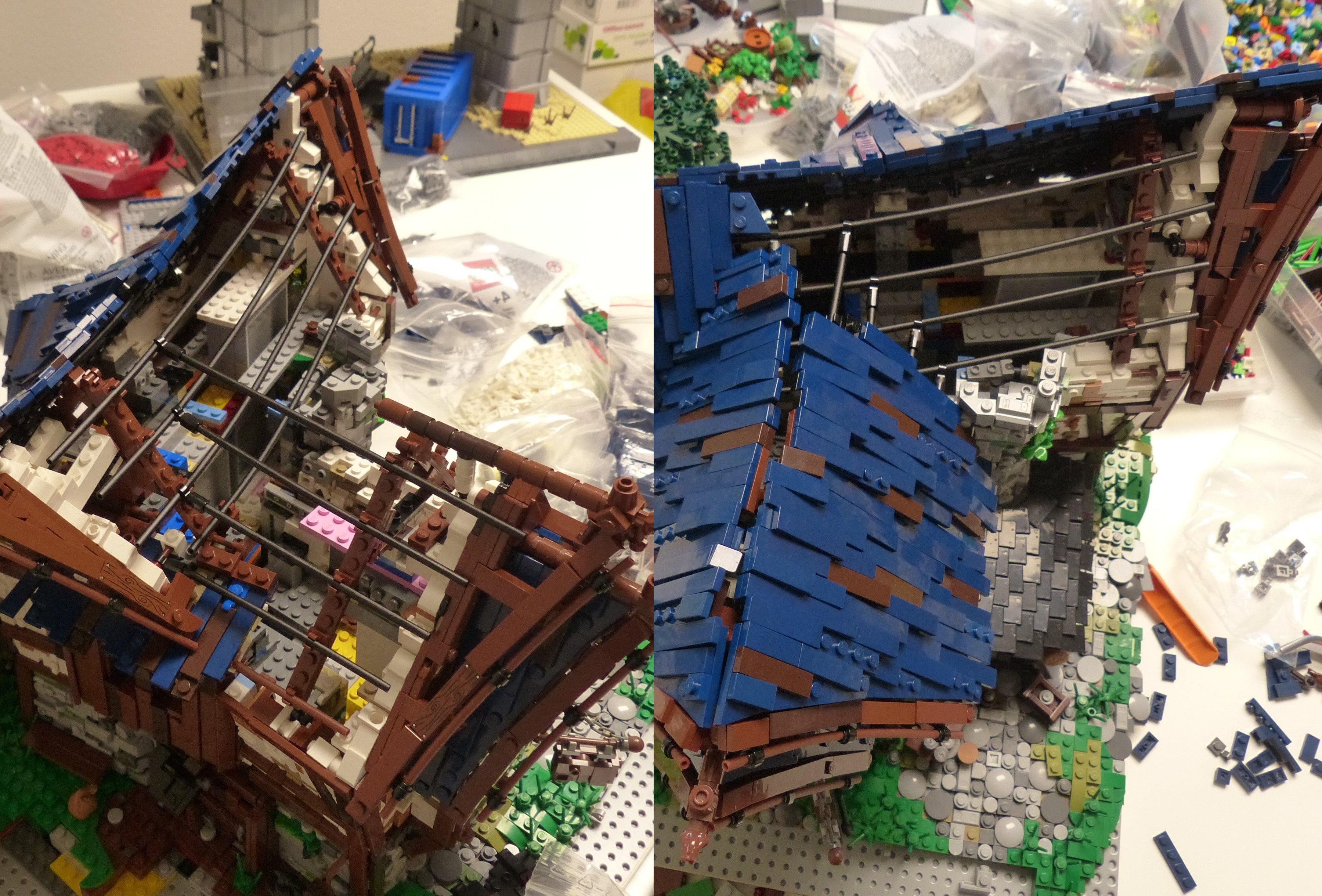 The blacksmith shop is a staple of custom LEGO creators, and while we typically see blacksmiths from medieval time periods or fantasy worlds, the art of metal crafting spans many time periods. This is evident in Ayrlego‘s model showing a swordsmith honing the blade of a soldier in the British military with a spinning stone in a charming colonial outpost. 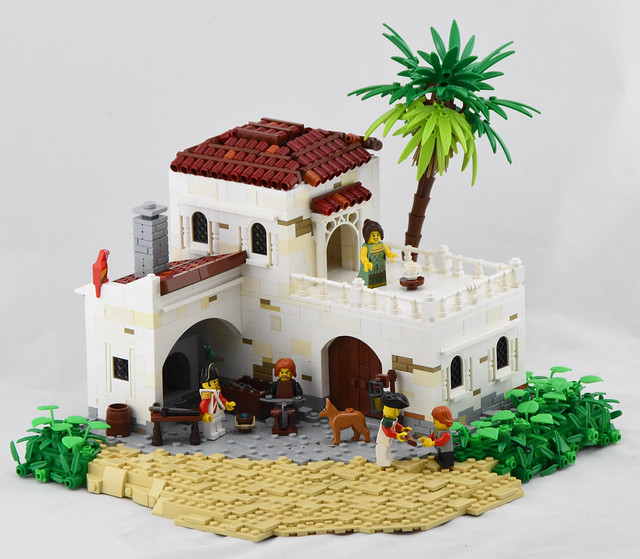 If you’ve ever wondered what to do with your faded bricks, check out the collection of faded white elements throughout the model. Along with some tan and dark tan parts, they give the building a nicely weathered look. Combined with the tile roof, it fits right in with the colonial architecture.

If the Middle Ages taught us one thing, it’s that heavy metal is nothing new. Ben Tritschler’s lively-looking medieval forge has the makings of a metal legend. Blacksmiths hammer away, piecing together suits of armor and shaping cannonballs. Ornate-looking armor is achieved, in part, with sculpted minifig appendages like silver prosthetic legs and mechanical arms. Everything is framed within a structure that is both beautiful and rundown, and the sideways-mounted tiles for the brick floor look brilliant. You can even almost smell the smoke and hear the din of the tiny hammer. 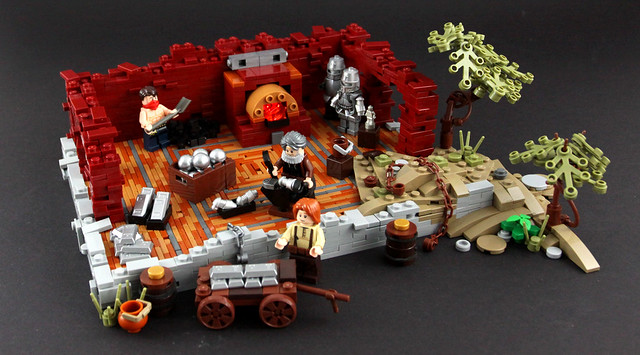 Fantasy-styled castle creations are a popular subject for LEGO builders, and we love when someone offers a twist in a building genre often dominated for long periods by a particular style. This village apothecary by Mr_Hobbit_Foot has elements of the established “fantasy ramshackle” style (pioneered by Luke Hutchinson amongst others) but adds a cartoony edge. We have the expected rough-and-tumbled brickwork to create detailed walls, and the mixture of tiles and plates for a textured roof, however the shaping of the central building evokes Asterix illustrations or a Celtic feel as much as your regular fantasy setting, and the irregular bases make the whole model pop off the page. 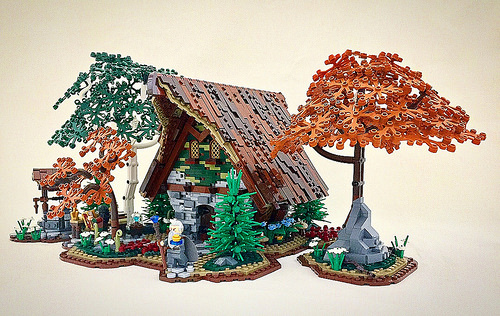 The builder appears to be slowly putting together a full fantasy village in this style. I particularly like the blacksmith’s shop, which comes complete with a pumpkin-headed scarecrow out front… 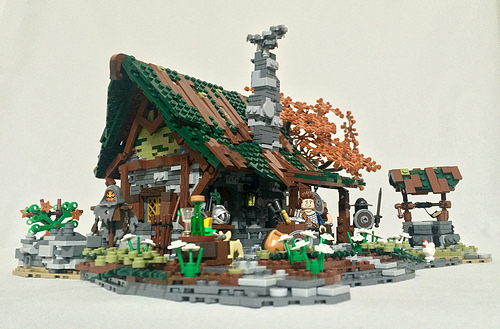 It doesn’t take a big creation to pack in a lot of detail, and this build by Ah Ki is a great example of that! His LEGO “Medieval Weapons House” sits on a small base but has big character. It demonstrates the use of a cool patch-working technique to give it that rustic feel. There are a few neat uses of parts, like the 1x4x1 fence in the windows and wheel covers (hubcaps) for accents. It also has a fun color scheme.

My favorite part is the forge with its little awning and blacksmith at his anvil. The whole structure has a pretty nice shape to it, especially the roof, which makes a perfect little swoop. I just wish that we could get a tour inside! 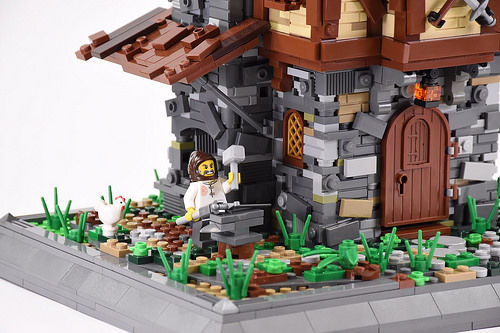