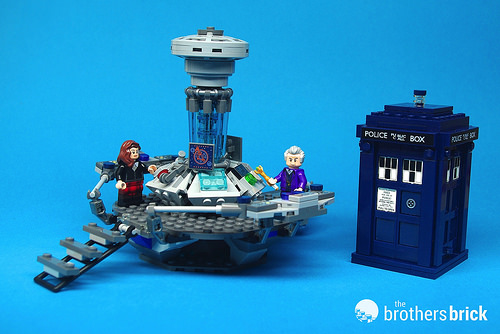 There are really no surprises at this point with the box and instructions from LEGO Ideas sets — a solid box good for storage and a perfect-bound instruction booklet that includes tidbits about the subject matter and profiles of the LEGO Ideas project originator, Andrew Clark, and the team at LEGO who helped transform his initial designs into a workable product. 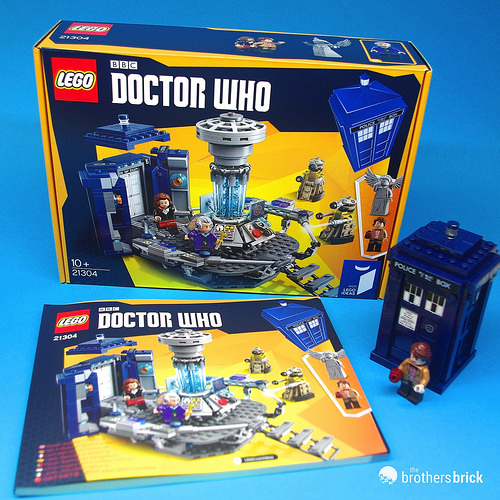 The set is recommended for ages 10 and up, and the complexity is indeed a bit lower than the last fan-designed set I reviewed, LEGO Ideas 21303 Wall-E.

As you can see from the box art, there’s a lot going on in this set — both an exterior and interior view of the TARDIS, two Daleks, a Weeping Angel, not one but two Doctors, and Clara Oswald. 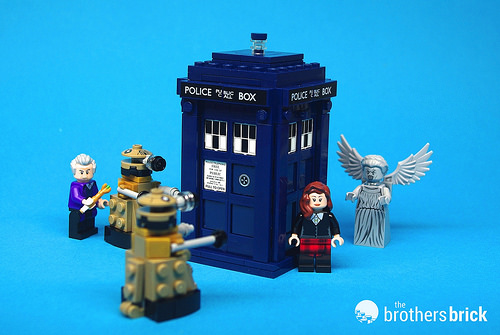 The bricks and minifigs come in six unnumbered bags, though, so you start by opening all of them. I’ve taken to using the box that a LEGO set comes in to build it, and had no trouble finding pieces later after dumping all the bags into the box. Naturally, I built the minifigs first, but I’ll come back to them later in this review.

You start by building the interior of the TARDIS, which is mostly standard studs-up construction (with a bit of the usual Technic for sturdiness and play features) until you get to the console, which includes six brick-built panels clipped at an angle onto the central core. 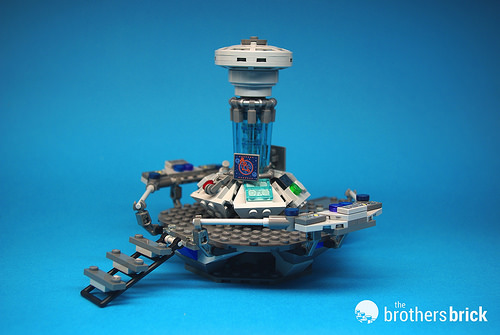 Part of the Technic understructure exposes an axle that will connect to the “outside” TARDIS later. 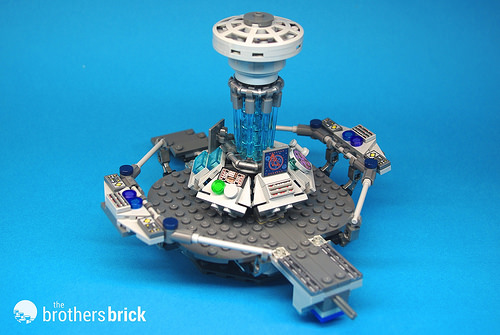 Next, you build a couple of Daleks, which employ a bit more SNOT (studs not on top) construction, putting the outward-facing studs to good use. 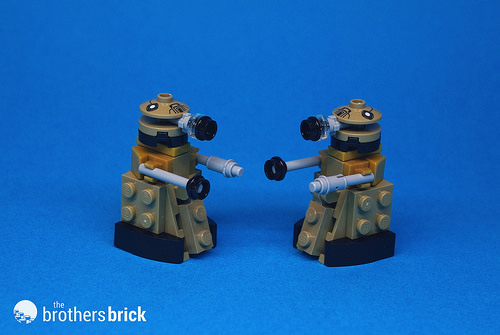 Each of the Dalek’s “arms” are brick-built. While the manipulator arm not being a LEGO plunger does seem like a minor missed opportunity for a behind-the-scenes sort of in-joke, both it and the sensor/camera arm include 1×1 round plates with holes that look great at this scale. Since I’m sure everyone will want to build their own Daleks in a variety of colors, I’ve included some breakdown photos. 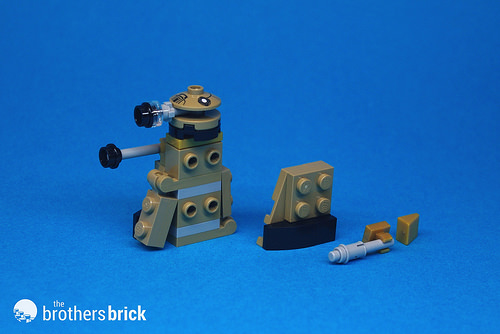 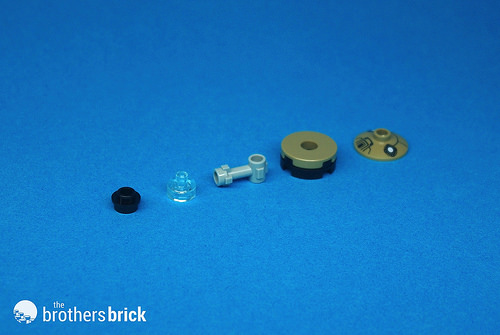 Of course, the star of the whole set is the TARDIS itself, a triumph in dark blue. 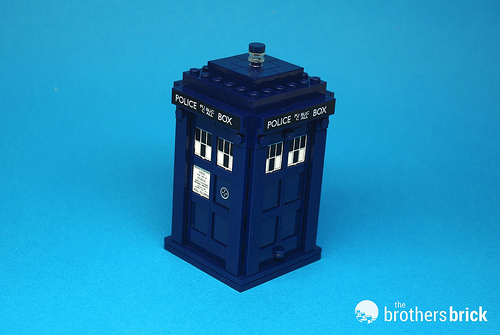 The TARDIS has a 7×7 footprint, and uses window panels and 1×8 tiles to recreate the layered look of the wooden paneling on the police box. But the ingenuity of the LEGO TARDIS lies in its surprising play features, which — along with the minifigs — I’ll return to shortly…

21304 Doctor Who includes 623 pieces and 4 minifigs at 59.99 USD — a good value from a pure price per parts standpoint, by the old ratio. The TARDIS is built almost entirely from dark blue, with numerous parts never before seen in this unusual color, including corner tiles.

We’ve come to expect decorated elements in LEGO Ideas sets to be printed, and again there’s no nasty surprise here (putting a whole new spin on the phrase “sticker shock”). In addition to a lot of standard printed tiles, there are eight 1×3 tiles printed with “Police Public Call Box” text (1×6 text split across pairs of 1×3 tiles), a large window panel printed with the miniature version of the TARDIS’s front door, eight exterior window panels, a “Police Telephone” notice window panel, St. John Ambulance window panel, two clip panels for the TARDIS console, two 2×2 radar dishes with the Dalek head dome design, and a 2×2 round plate with a funky design for the console again. Phew!

The TARDIS interior includes some useful pieces in dark gray and pearl silver, but the highlight for me was a new 2×2 round “jumper” tile with a stud in the middle that’s also a hole. Imagine the SNOT possibilities of plugging that stud into its inverse — the 2×2 round tile with a hole. You can see it on top of the TARDIS core. 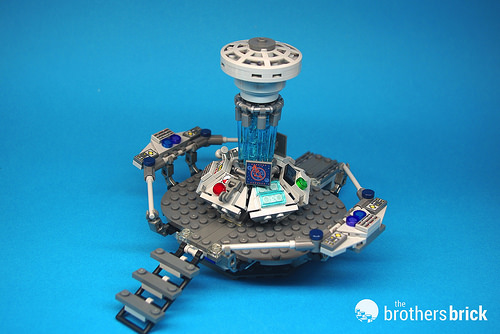 As I recommended with Wall-E, this might be a set worth buying a second copy for the parts.

Through a sequence of transformations, the police box opens to reveal another small TARDIS interior (also revealing that a pretty blue background makes for inconsistent lighting…). 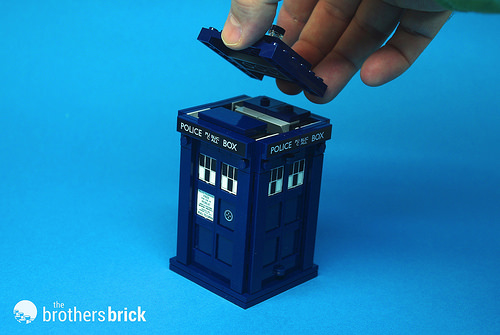 After taking off the top of the TARDIS, you swing two of the “Police Public Call Box” sections up on hinges, which enables you to open the TARDIS (this also explains why each sign is split across two 1×3 tiles). 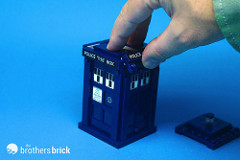 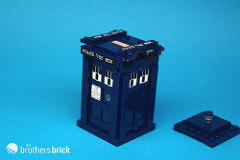 The interior of the police box version of the TARDIS is still large enough to hide a minifig. 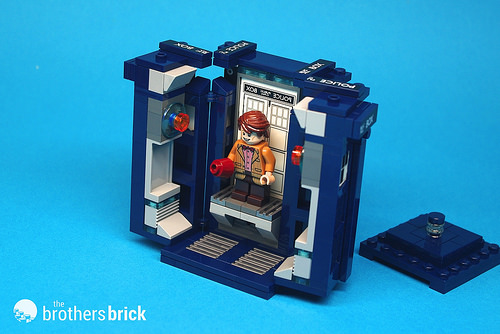 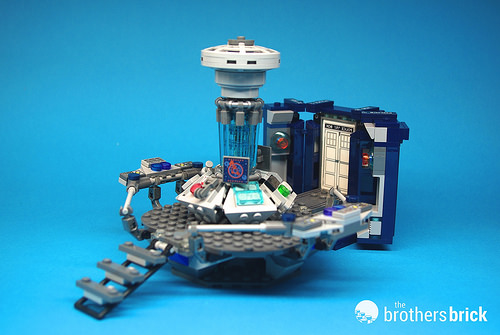 The playlet component makes a nice display model, but the first thing I did when I finished building the set was remove the opened police box TARDIS from the interior TARDIS and swoosh it around the room singing “ooo-WEEE-ooooo!”

It’s also interesting comparing Andrew Clark’s fan design with the final set. The opening police box shares a lot of similarities (and is a pretty cool idea), but the TARDIS interior has a very different configuration. An interesting suggestion that didn’t make it into the final product was a sound brick to make the TARDIS’s unique sound (I have a trash can that makes those sounds when you open it).

Andrew Clark’s original Ideas project had suggested a couple alternatives for the minifigs — David Tennant’s 10th Doctor and Billie Piper as Rose Tyler or Peter Capaldi’s 12th Doctor with Jenna-Louise Coleman as Clara — plus Tom Baker’s 4th Doctor as an extra fig. The set designers ended up going with Matt Smith’s 11th Doctor, the 12th Doctor, and Clara, plus a Weeping Angel. 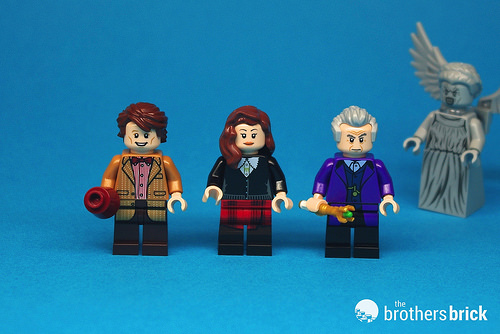 The 12th Doctor’s head doesn’t have an alternate face, but both the 11th Doctor and Clara have alternate quizzical expressions. Both Doctors have printing on their backs, and the multi-color printing on Clara’s legs goes all the way around. 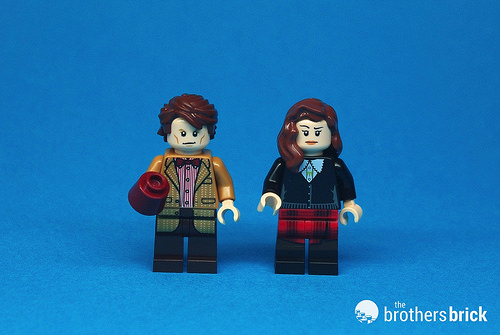 Naturally, the Weeping Angel has a behind-your-back out-to-get-you look as well as a calm statue look. 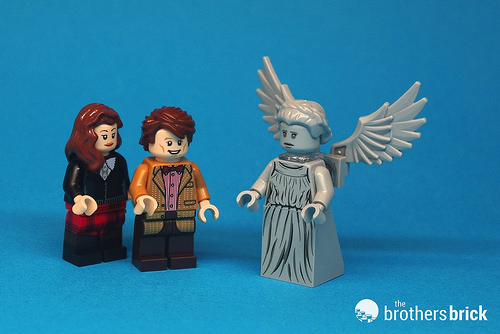 This is a really fun set, though it didn’t induce squealing in me like Wall-E did. If you’re a hardcore Whovian, this set is a must-buy, obviously, and even a negative review from me wouldn’t have dissuaded you. But for sheer variety of useful minifigs and parts — all that dark blue especially — I’d be hard pressed to find a better value in a mid-size set.

LEGO Ideas 21304 Doctor Who will be available from the LEGO Shop and, more than likely, Amazon.com in January, if not sooner.

Having lost a month of save data, I’m still working on catching up again in LEGO Dimensions, I’ll bundle a brief review here of the physical components of the Doctor Who Level Pack released a couple of weeks ago.

The pack includes 12th Doctor, an adorable mini-TARDIS, and K-9. 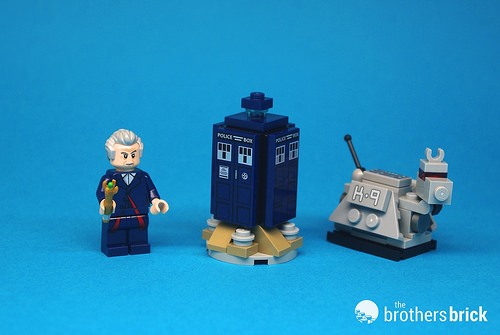 I actually prefer this minifig version to the one in the larger LEGO Ideas set I’ve reviewed above. Like the big set, everything is printed, with four 2×4 tiles for the TARDIS and a “K-9” tile.

It’s hard to turn down a tiny TARDIS and 12th Doctor with K-9, but I hope you’re not willing to pay $29.99 for 83 pieces. You’re mostly paying for software, and I’ll reserve judgment on that until I’ve finished re-playing LEGO Dimensions and can share my full review with our readers.

The LEGO Dimensions Doctor Who Level Pack is available today.