END_OF_DOCUMENT_TOKEN_TO_BE_REPLACED

Youtube movie-spoofers/critics How It Should Have Ended  have enlisted LEGO animators Brotherhood Workshop to create an amusing recap of all seven Harry Potter films in just 90 seconds, running Harry through all the various trials in record time. It’s perfect timing, as moviegoers prepare for today’s opening of Fantastic Beasts and Where to Find Them, the first new film set in the Wizarding World since 2011 (spoilers: I saw it last night and loved it). The new Dimensions packs based on Fantastic Beasts are also available today, featuring Newt Scamander and Niffler in a Story Pack, and Tina Goldstein and the Swooping Evil in a Fun Pack.

The much anticipated movie Batman vs Superman: Dawn of Justice is still 7 months away, but Tommy Williamson and his crew at BrickNerd Studios (the team that did the animation for the recent LEGO Brickumentary) have wasted no time in producing a follow-up to their earlier LEGO Batman vs Superman brickfilm. So without further ado, here is…

Now animation of this quality requires time and money to make. To that end, they have just started a pledge drive to fund future BrickNerd projects and activities. And as a token of their appreciation, lucky pledgers will be eligible to receive one-of-a-kind LEGO trinkets from BrickNerd Studios …including the batmobile featured in both films!

For its Season 4 bout between the Greek god Zeus and the Norse god Thor, the hugely popular YouTube channel Epic Rap Battles of History turned to Forrest Whaley and his team of stop-motion animators to give it the LEGO treatment. And the result is hilarious! Make sure to check out the entertaining behind the scenes video too.

Context isn’t necessary to enjoy this beautifully photographed creation. According to builder Nathan Wells, this is the set for a brickfilm currently in production. Frankly, with as lovely as this still looks, I can’t wait to see the finished product.

It has taken almost six years and about 43,200 pictures (give or take) but Gregory Tull‘s dream of a full length (give or take) LEGO stop motion movie has almost to come to fruition. 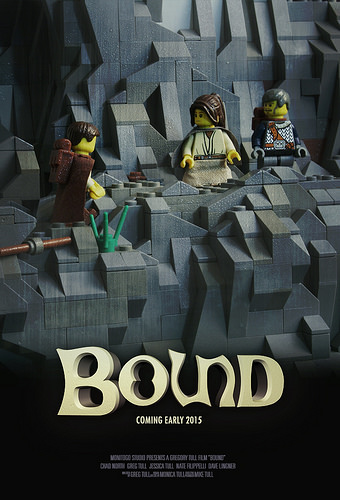 They’re in post production now editing the roughly 50 minute long movie which is set to be released early 2015 – both online and hopefully limited theatrical release if they can find a distributor.

In the mean time check out the trailer:

I’ve seen a lot of brickfilms, but what sets this apart from the rest, besides the obvious length, is the attention to detail and big budget effects – like the rain scenes. The rain itself is easy, that’s just computer effects. But the wet surface – well that is as horribly painful to capture as you might think: they sprayed the set with water, took the image, dried off all the LEGO, and did it again…. for every frame … for 3 months … but it looks pretty darn cool.

Three Finnish brothers, Sandmaenchen, Blaitteri, and Erythron from Hovinet.com spent over 7 years to create this 146 min Brickfilm with 110,000 pictures. You can read more about the plot summary and stats on Bricks In Motion.

BrotherhoodWorkshop presents another amusing installment of their LEGO Lord of the Rings videos, this time featuring the Ent Treebeard — along with the usual orcs.

Hope everyone is having a wonderful Christmas, full of boxes under the tree that rattle in that very special way.

Alex Kobbs (Kooberz) is no stranger to LEGO stop motion films. His works have been featured here in the past. His latest film based on the Portal 2 video game has just become public.

If you like it, be sure to cast your vote in the Machinima Interactive Film Festival.

Be sure to check out his Youtube Channel for his other films.

The latest video from BrotherhoodWorkshop gives us a behind-the-scenes view of what happened during the Battle of Helm’s Deep.

The whole video is funny, but the punchline at the end is priceless.

You might think that stop-motion animation is just a matter of taking lots of sequential photos, but there’s a lot more to it than that. Kevin Ulrich shares his experience creating the popular Hobbit and Lord of the Rings shorts we’ve featured here over the past few months.

Like all movies and TV, I would argue myself that what actually makes the BrotherhoodWorkshop shorts so great is excellent writing. Can’t wait to see what they post next!

The guys over at BrotherhoodWorkshop are getting into the Halloween spirit by sharing another installment of their hilarious Lord of the Rings and Hobbit short films, all animated in LEGO. It should come as no surprise that a certain pair of Hobbits would play a few pranks on Halloween, but just wait ’till the end…

As always, BrotherhoodWorkshop’s stop-motion animation is smooth, with delightfully funny writing and excellent parody voice acting for each of the characters.