Today marks the third anniversary of The Brothers Brick!

I believe that 2007-2008 was the year that The Brothers Brick truly became more than just another LEGO blog. All of you out there make this a community, with LEGO Ambassadors representing the tens of thousands of you who visit the site.

The LEGO fan community has seen its shares of ups and downs over this past year. We rallied together during the Great Brickshelf Crisis of 2007, and we’ve avoided much of the fragmentation I feared at the time. In addition to blogs and other online venues like The Brothers Brick, fans can now get their LEGO fix in print from BrickJournal and listen to the LAMLradio podcast on their MP3 players.

We’ve also been fortunate to add two contributors over this past year. Nannan Zhang has brought much-appreciated energy, while we look forward to columns from Keith Goldman. Thanks to Nannan, our event coverage expanded beyond my posts about BrickCon last October to include his news and highlights from BrickWorld in June.

And then there were the fads and bandwagons, proving that with great power comes great responsibility. 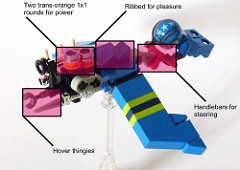 Looking to the future, and giving back

Advertising sucks. We added ads to pay the bills, but now we have enough traffic and so many of you are making your LEGO purchases through us (thank you!) that this is the right time to increase our transparency by sharing what we’ll be doing with the extra income.

We’ll be rolling everything beyond what pays the bills back into the LEGO fan community. It really is as simple as that. Specifically, you’ll see more frequent contests (with good prizes), giveaways (online and at conventions), and maybe even “scholarships” for LEGO fans who might not otherwise be able to attend important LEGO conventions.

Despite my inability to perform basic arithmetic (“100% more of zero is still zero,” as someone gently pointed out recently in response to one of our taglines), I always like sharing numbers about all of you readers out there.

Although we’ve had visitors from 181 countries (literally Afghanistan to Zimbabwe), most of our readers are from countries where English is the predominant language. 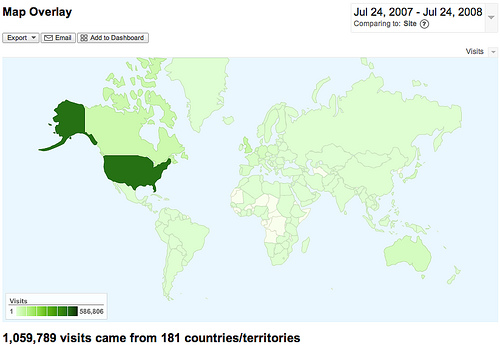 I’ve always listed the top 10 countries, but you might find the top 30 more interesting:

So, what are all of your out there most interested in? And what sites are you coming from?

The top ten referring sites are only the tip of the iceberg:

Of seventy million blogs that Technorati tracks, we’re in the top ten thousand, or 0.0143%. Wow!

Our most popular posts run the gamut from the very best (and sometimes weirdest) LEGO creations of the past year, along with the up-to-the-minute news you’ve come to expect from us: