Growing up, one of my most favorite movies was Disney’s version of Robin Hood. After watching it, my cousin and I would run around pretending to be the famous archer, shooting our toy arrows at impossible targets. Apparently superb builder and LEGO designer, Markus Rollbühler loves the hero too. This sculpture of Robin Hood is excellent, with particularly great posing and parts usage. I’m partial to the bow, myself, but the minifig shoulder armor for the sword guard, palm tree segment for the boots, and large figure shin element for the log are all great too! 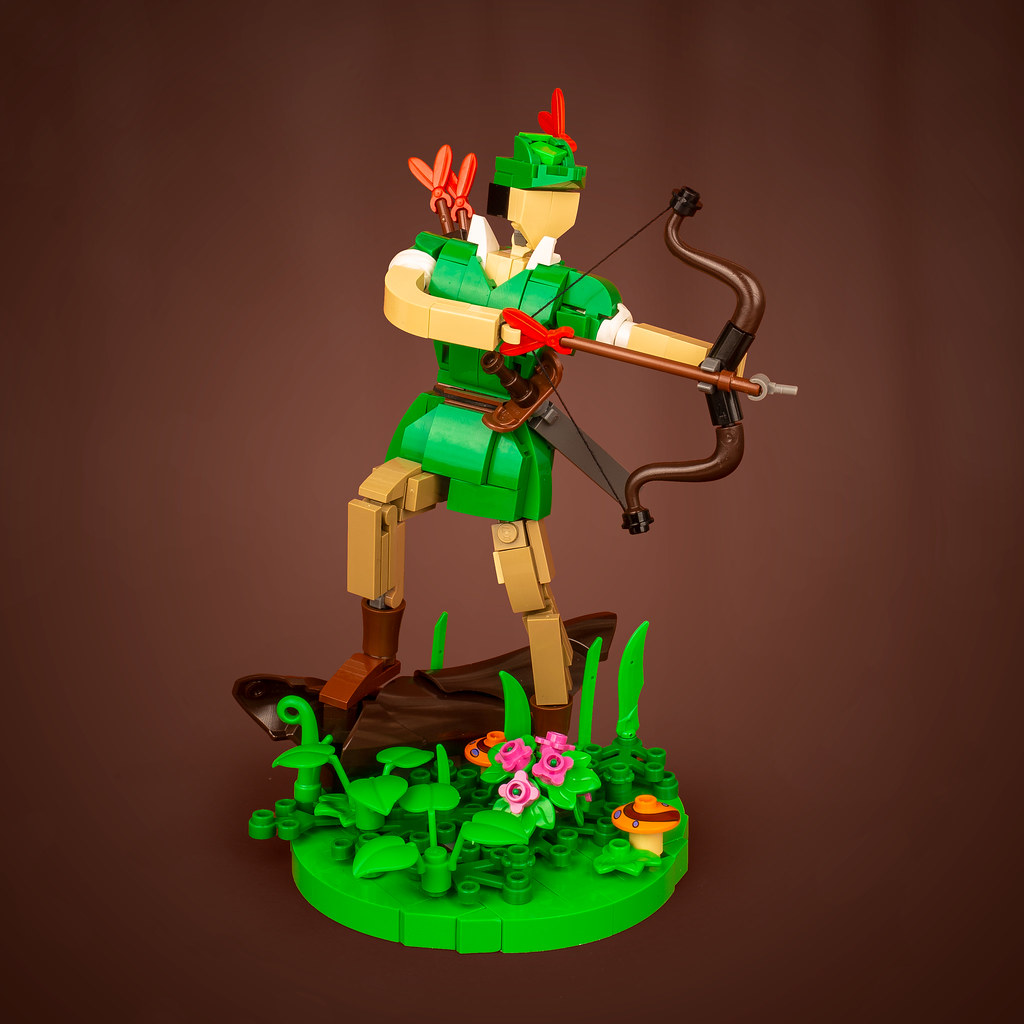 Stick around to see more creations by Markus, and well as plenty of builds featuring the man in tights.

In a world where steampunk hot air balloons and sky-pirates exist, there is a need for sky-based communication and supply stops. This cozy LEGO “Cloud 9 Outpost” built by Marcel V and LEGO designer Markus Rollbüler is just the place. It may be cobbled together, but it’s home-sweet-home to its humble inhabitant and his trusty pup. He also has to be picking up all sorts of reception with so many satellites and antennae! There’s lots of funky and fun parts usage here, but I particularly like the minifigure goggles used as bench legs. 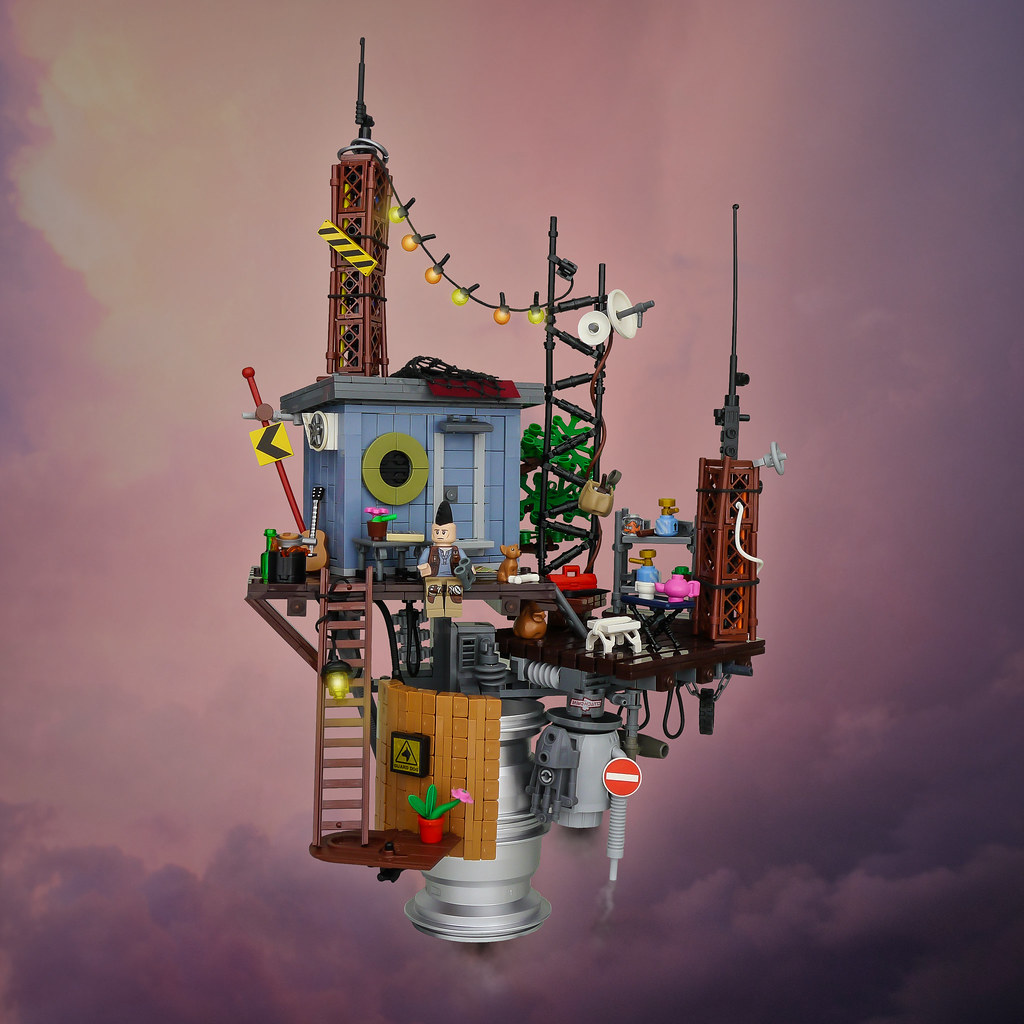 This could be a place for a weary traveler to find respite or just a solitary lookout. Who knows? But what I do know is that there are many more builds to see by Markus and Marcel!

This fun LEGO build from Markus Rollbühler was created as a reward for the fan challenge Summer Joust 2021. The color choices work well together, and there are some creative parts used, like minifigure hands and feathers for the birds, and the cat tail piece used for the squirrel’s tail. I especially love the orange/white balance between the tree and the minstrel. 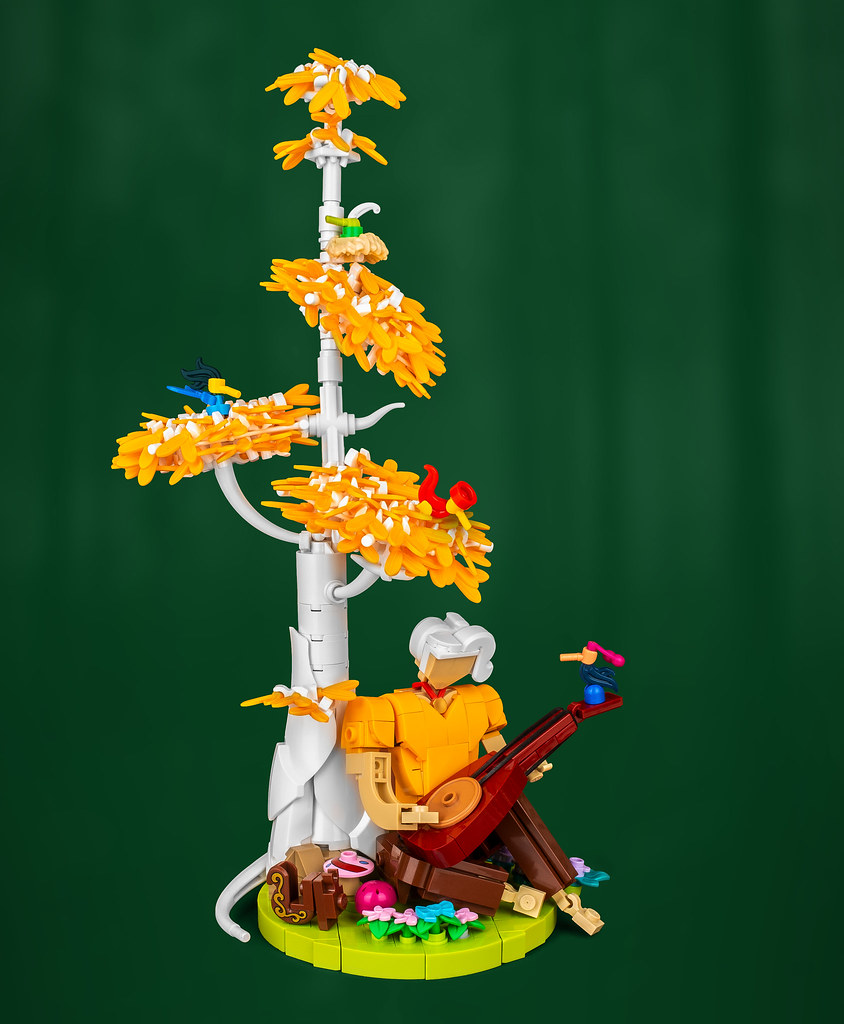 Idols are meant to inspire, but all too often they’re shown after centuries of wear and neglect, stripped down to the wood or stone that serves as their core. But Markus Rollbühler shows us a totem in full splendor in Jungle Idol. The bright colors are all sourced from uncommon parts like red paddle-ends and wakeboards, blue wrenches, and, yes, a halo of carrots. There’s also a splash of teal in the central disc and arms that makes me grin. 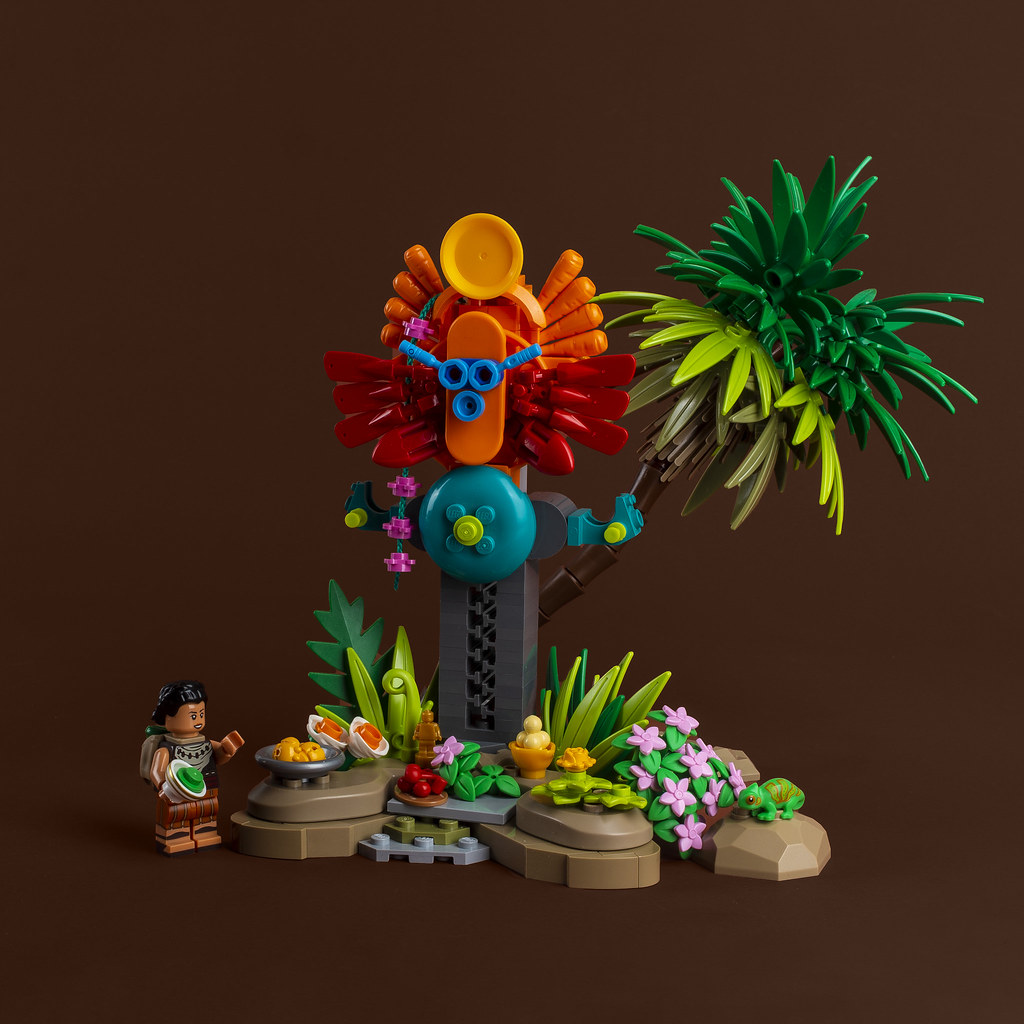 Markus notes that Emil Lidé came up with the technique for the palm trees – a gracious touch that speaks to how the LEGO community can inspire each other, even at the highest levels. 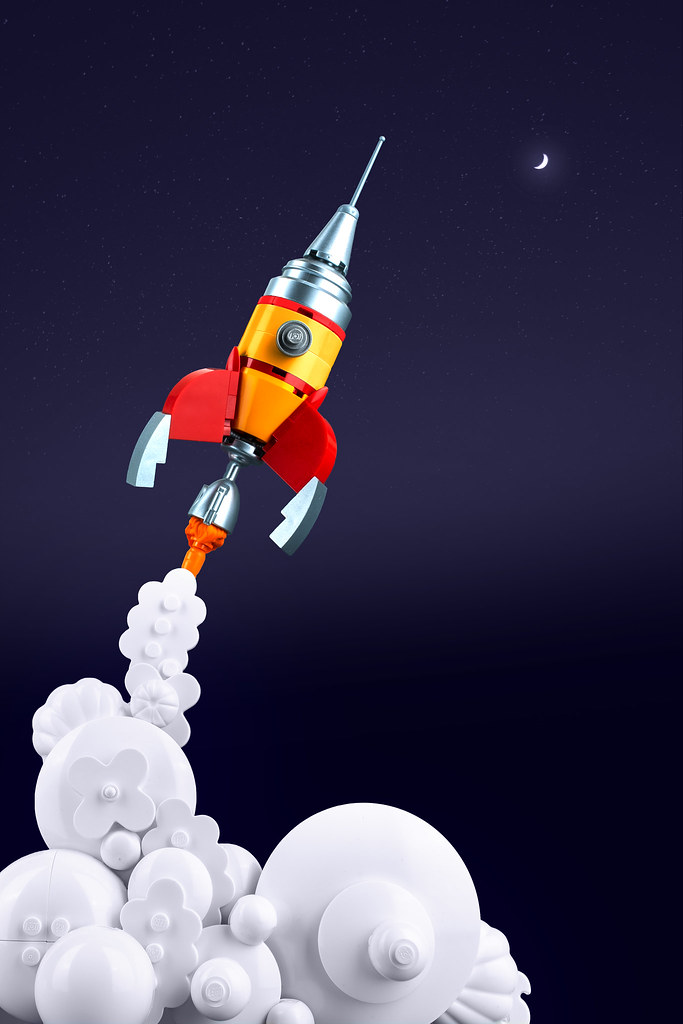 I personally am a minifigure scale builder. I never tend to navigate to building on a different scale. This does not mean that I do not appreciate when other builders do. Markus Rollbühler made an amazing creation on, what I’d guess is, Belville scale. There are quite a few LEGO parts used in an original way. The cauldron is made by turning a big tire inside out. The bubbling effect is created by using the new cake icing and a sausage doubles as a spoon ladle. The big table uses tree trunks as table legs. Simple yet really effective. However, the best design has to be the mumbo jumbo of parts used to create a beautiful white owl. The chima eagle head was used for the head. The Yeti head was used as the body of the bird and the wings were made out of a combination of the fur collar and the large figure pads. Last but not least, have you seen the globe with sausages used in the globe holder? 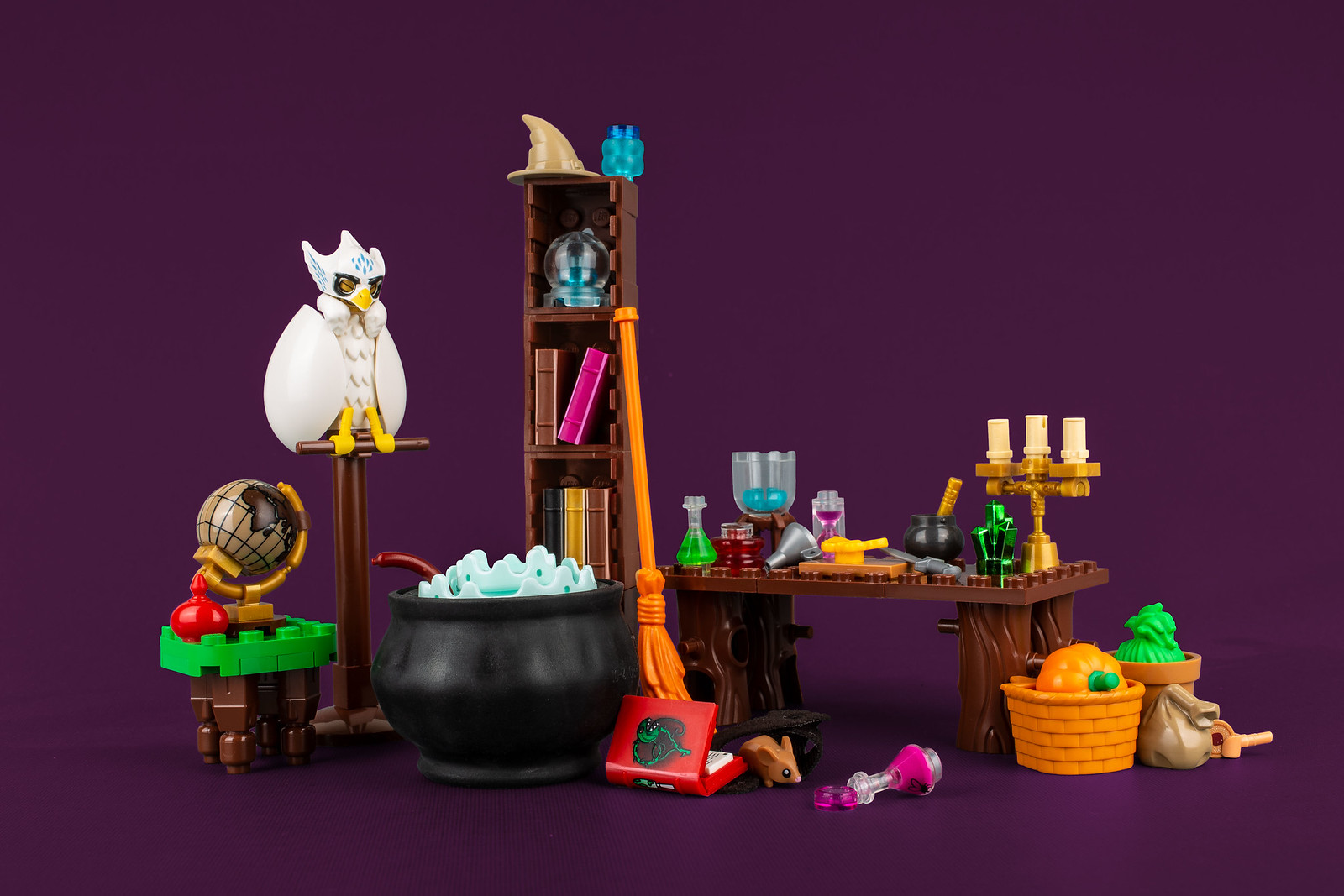