In an era when cable TV and video games were just starting to compete for our attention, the comic strip Calvin & Hobbes inspired a generation of kids to have a renewed appreciation for the wonder of the outdoors and the versatility of cardboard boxes. But the cartoonist, Bill Watterson, was always adamant that his strip never be merchandised in the way comics like Peanuts and Garfield had been. So, outside of a few book collections, readers were left with few options when it came to celebrating their fandom. Thankfully, LEGO is a product that encourages you to build anything your imagination can conceive of. And Simon Liu has taken advantage of that fact to grace us with brick-built versions of Calvin and his feline companion. 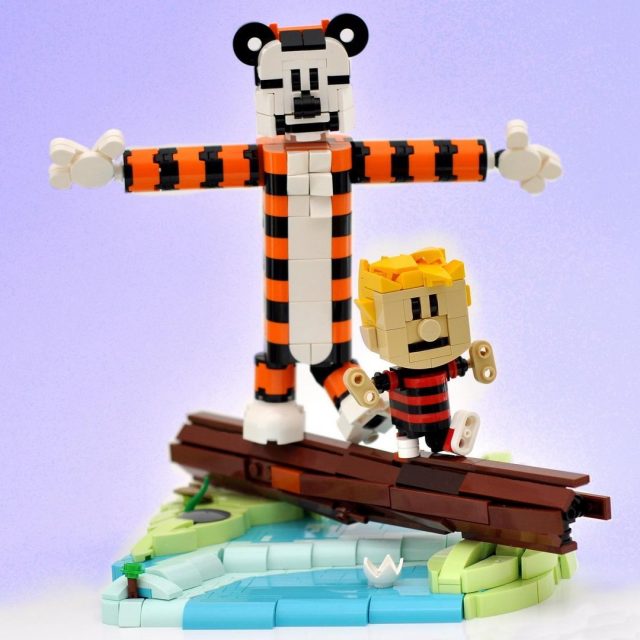 This build recreates one of the more famous images of the pair, a shot of them balancing on a log which first appeared in The Calvin and Hobbes Lazy Sunday Book. It’s everything I’d want to see in a hypothetical licensed LEGO set. Not only are the characters perfectly realized, but the attention paid to the wilderness base they stand on has all the hallmarks of Watterson’s art. The soft palette of colors evokes the watercolors that were often used on supplemental book images. And details like the log’s crooked tiling and the small dip in the creek give the environment the same realistic feel that landscapes in the strip were known for. While Watterson may not ever want to see this as a set for sale, I’ve no doubt that seeing the effort that Simon put into honoring his creations would make him smile.

Talented TBB alum Simon Liu brings us the iconic duo Calvin and Hobbes. Simon is no stranger to Calvin and Hobbes LEGO creations. This time he decided to challenge himself by using only 101 pieces. 101 pieces doesn’t sound like a lot, but the figures are quite small so to me it still is astonishing that these two figures consist of 101 parts. Most of the parts used are smaller than a 1×1 brick. Even though their faces are featureless the figures look instantly recognizable — Hobbes’ face is especially well made. I am quite curious how Hobbes’ ears are connected. My guess is through friction and I am perfectly fine with that as long as he doesn’t lose them when they speed of a steep hill in Calvin’s red wagon. 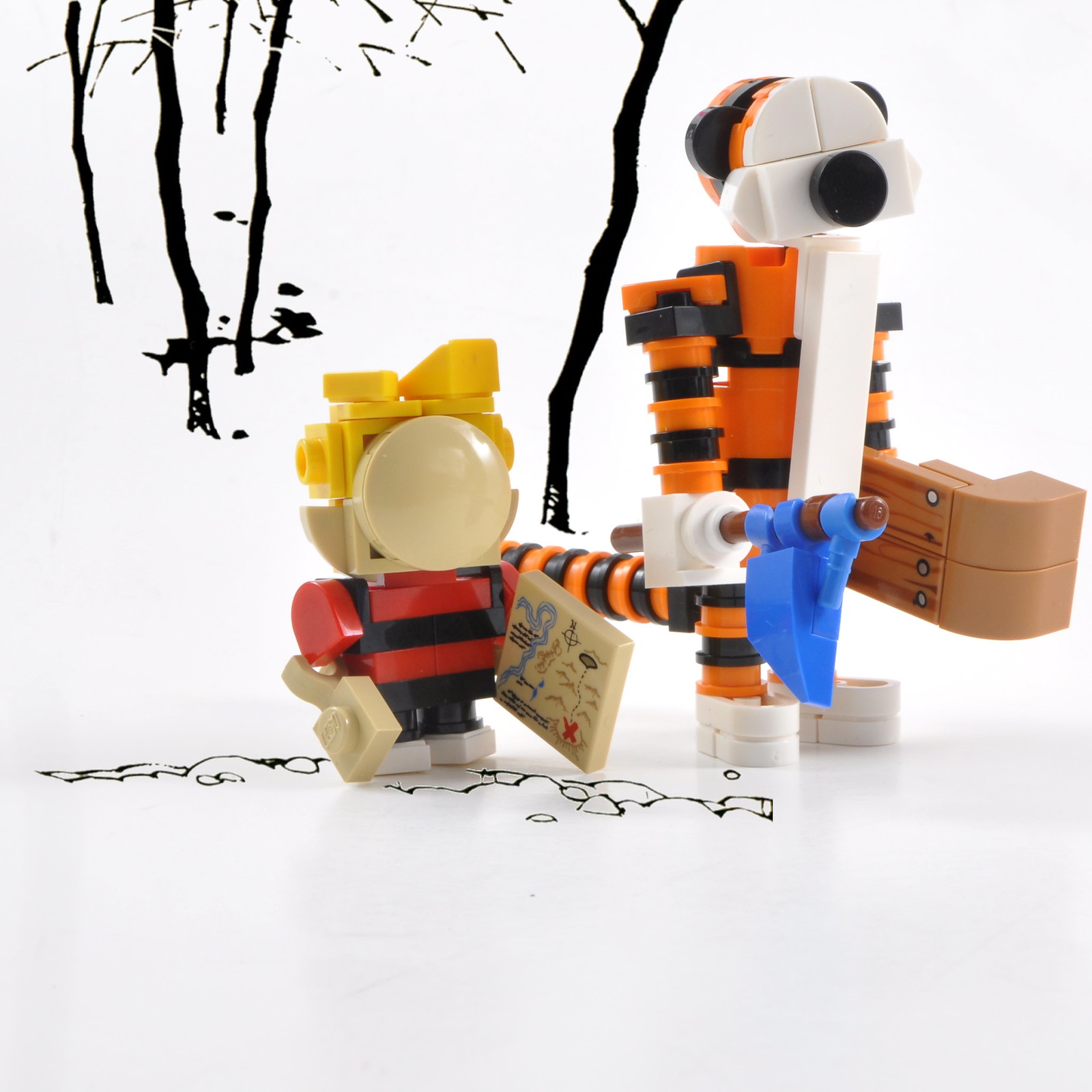 Want more LEGO Calvin and Hobbes creations? Check them out in our archives! 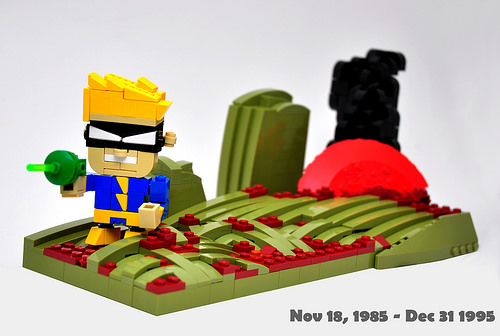 END_OF_DOCUMENT_TOKEN_TO_BE_REPLACED

Evan and our very own Simon have revisited their childhoods and created a beautiful homage to what is possibly the best comic strip of all time, Calvin and Hobbes. 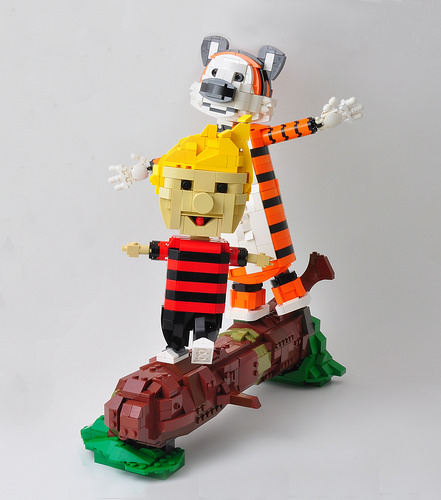 Simon should have posted this himself but he’s too lazy. Feel free to tell him that in the comments.

There’s a giant soft spot in my heart for Calvin and Hobbes, some of my best childhood laughs came from his snowman antics especially. When I saw this creation by Tyler Sky (Bricksky), I had no choice but to share it here. Tyler has perfectly captured the characters, as well as the hilarious snowman antics. If you live in Vancouver, it sounds like you can even see it in person, at the Oakridge Mall Lego store. 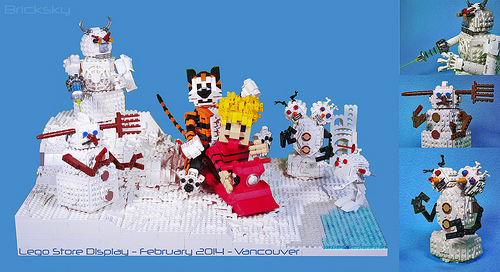 Blake Baer (Blake’s Baericks) created this scene for the ongoing MOCathalon. I am sure most people are like Blake (and myself), in that Spaceman Spiff is their favourite Calvin & Hobbes character. Well Blake not only did the intrepid space explorer justice, he also did a wonderful job of creating a beautiful alien landscape full of exotic flora. 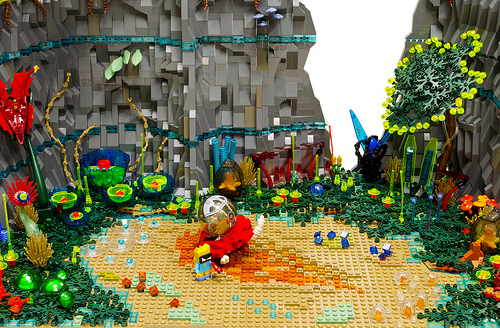 Be sure to check out this full size image to to see all the amazing details.