From time to time we like to check in with an enigmatic LEGO builder who calls herself why.not?. Sometimes her subject matter is dark. Sometimes it’s real dark. But in every case she has us intrigued. Her latest offering is untitled. They’re all untitled. I mean, it’s not like she forgets to name them, she actually types in “untitled” for every creation she does. But this time we have what appears to be a beautiful, brightly lit angel emerging from an underground place. Black city buildings flank her on either side, even the ground is black. She uses red lighting to not only create patterns on the buildings but to denote the readable words “out” and perhaps “dream”. Could this represent our artist emerging from a dark funk? Is this a new chapter in her life or is it a phase? Either way, we remain to be intrigued. And why not?

Perhaps it has been all this time indoors. Maybe it’s the fact that it has been raining a bunch, and I have small children who cannot be kept out of the mud by anything short of shock collars (which I have not tried, for the record). But when I see this build by why.not?, I get the feels. It’s sad and grey, with only dark and dingy colors, just like an afternoon of re-runs of Clifford the Big Red Dog with toddlers with rain pouring down outside. While I love the rocks made from the huge pieces, and the decrepit shrine is well done, too, it’s the rain that strikes me most with this build. The brick-built sky, with the slanting dark grey raindrops against the light grey clouds, is melancholy enough, but the dark tan water, with tiles inserted at differing depths to simulate raindrops plunking onto the surface, really brings the effect home. Golly. Are those really raindrops, or just my tears? 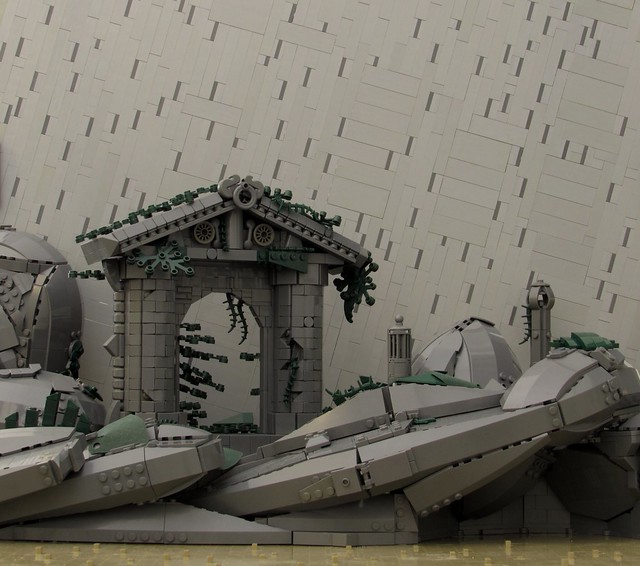 Some folks are just too unruly for this world. Their actions can lead to a stint on Death Row, then eventually a final dance in the Electric Chair where, legend has it, they go to meet their maker or some other entity less favorable. When we’ve featured this builder’s creations in the past, they have left some of us asking what or why?. In every case, her own chosen name comes back with a defiant answer: why.not?. Why not, indeed. One thing for sure is she’s an enigmatic builder whose subject matter has us just intrigued enough to check in on her from time to time. As foreboding as this is, I like the use of tires as restraints. The overall lighting is inspired. There will come a time again (maybe soon) when this builder will grace us with something a little grim and odd to puzzle over. Until then, we’ll keep doing what we do. 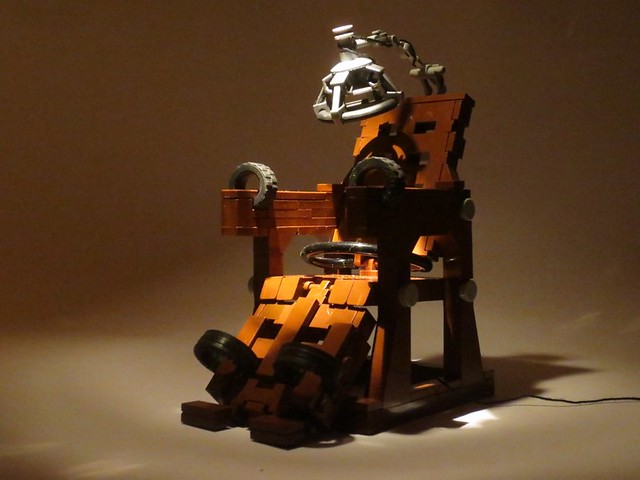 I’m always impressed when someone builds something with LEGO bricks that doesn’t have a strong tie to an established theme or building style. It takes a special kind of eye to look beyond the mundane, and builder why.not? has that vision. Or they had a vision. Or maybe just a very bad dream. Whatever the source, they have brought to us an unsettling image indeed.
The central eye is built from 1×2 and 1×4 plates, using subtle color variation in light blue, tan, and blue grey to create a convincing iris against a white brick background. 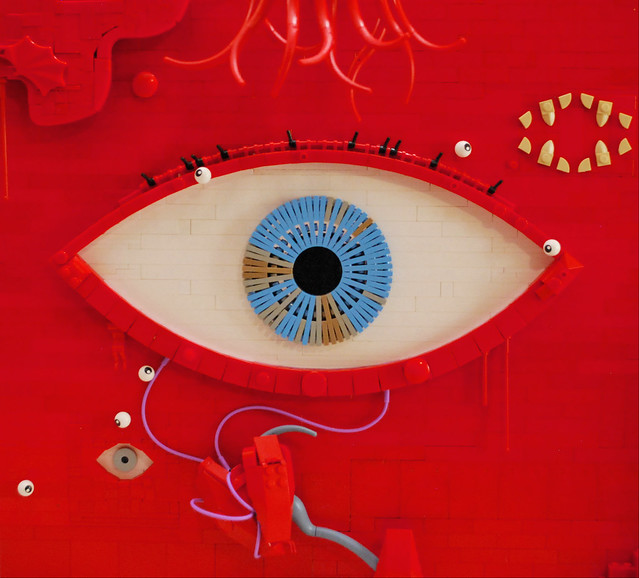 Eyelashes are constructed from minifigure hands clipped to the modified plates and tiles that create a smooth curve to the eyelid. There’s even a curved brick to represent the tear duct.
Additional creepy details include an abundance of Technic (eye)ball joints, a floating maw made of teeth and quarter-round tiles, and dangling red tentacles. The heart uses exotic elements like a sand blue dinosaur tail and medium lavender flexible hose. There’s even a dragon wing hidden in the blood(?) in the upper right.

I’m not sure what this piece says to me. But I’m kind of glad it can’t talk. I doubt I’d want to hear the messsage it brings.