The Lonely Mountain is currently the largest set in the Lego Hobbit line. This set was released this fall and retails for $129.99 on Amazon. Below is a brief video review and my remarks regarding the set. 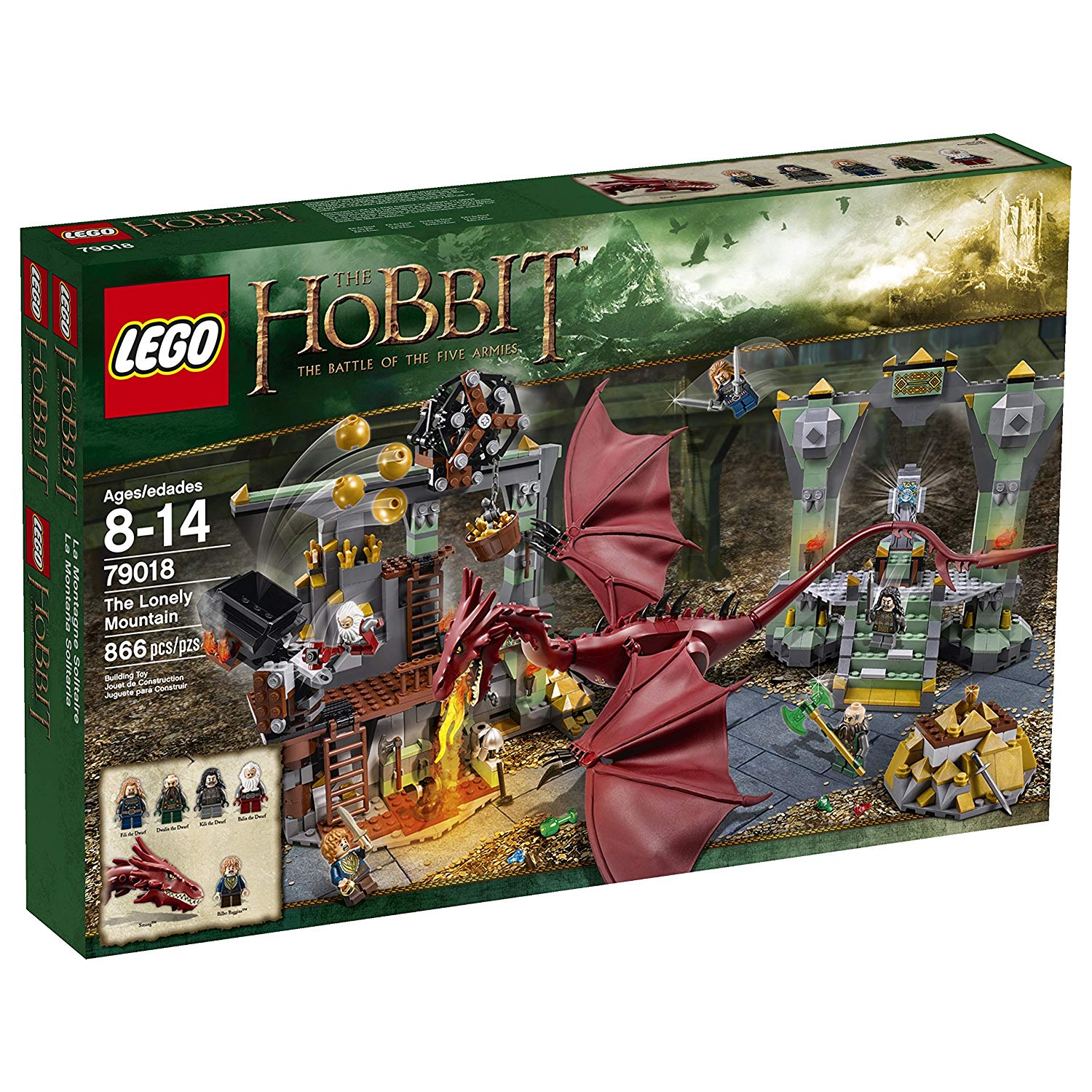 Overall this is a great set for parts, minifigs, and Smaug is an attractive beast to most fans. A decent number of play features mark this as a good playset, and the sand green bricks make it stand out among other less brightly colored sets from the same line. My only complaint is the huge price tag, which is largely a result of including Smaug, whose new parts drive up the production cost. Ultimately I’d like to see this set discounted to $80-$100, which would be a reasonable purchase. I recommend holding off on buying the set unless you absolutely love the new Smaug.

San Diego Comic-Con is underway, and with it comes new set announcements. First up is for The Hobbit line, with The Lonely Mountain. Details are still forthcoming, but we do know that this 866-piece set will run $129.99, and is due this fall.

In addition to five minifigs, the throne, and the mine, this set also features Smaug. 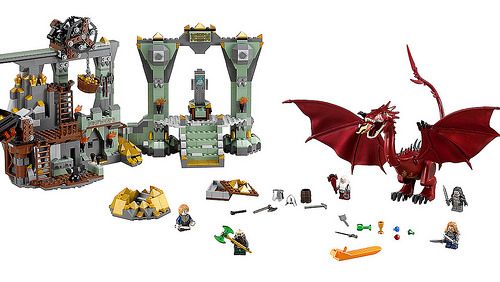 Viktor Jakobsson (=DoNe=) built a model of Bag End from The Hobbit featuring a well-sculpted landscape and a fully-detailed interior. You can see more photos on Brickshelf. 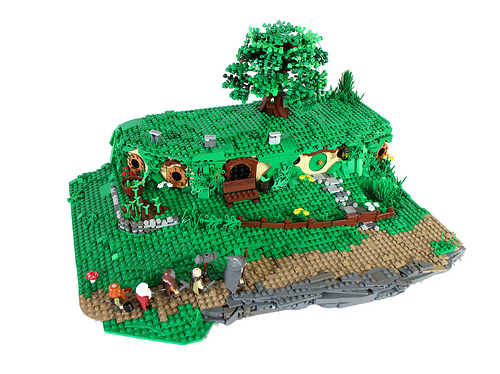 Gabriel Thompson (qi_tah) places Fabuland animal characters in a setting from The Hobbit in this whimsical mashup diorama. It features a beautifully designed and functional windmill and interiors to the hole houses. Check out Flickr for more photos and work-in-progress shots. 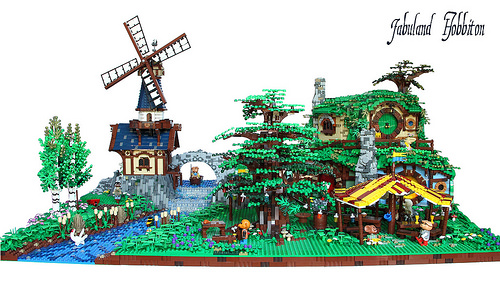 I’m sure many of you now have seen The Hobbit: The Desolation of Smaug–or at have read the book. It offers such rich locations, and I’m glad to see some start to crop up!

Lake Town offered something of a welcome rest for the group heading toward the Lonely Mountain, but of course things never just go the way they’re supposed to for the protagonist of any tale. Fianat has presented Lake Town the way he felt it could have been, and I have to say I really dig his version. 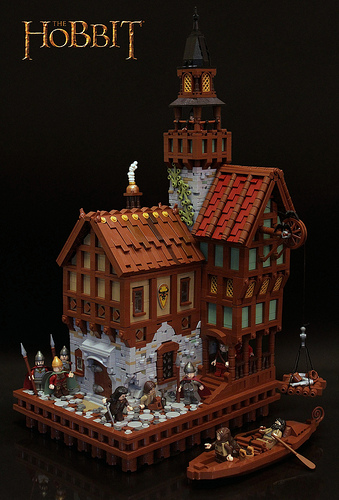 The last time we checked in with Alice Finch, she had just unveiled the world’s largest LEGO Hogwarts built from several hundred thousand LEGO bricks. Not content to let sleeping bricks lie, Alice has teamed up with David Frank to recreate one of my favorite locations in Middle-earth, Rivendell, “the last homely house west of the mountains,” where Elrond hosts both Bilbo and his dwarven companions in The Hobbit and Frodo and the Fellowship in The Lord of the Rings. 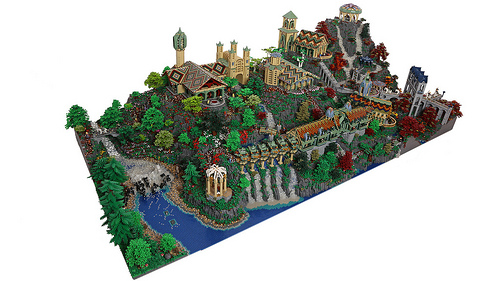 The Brothers Brick is pleased to unveil official photos from the two builders and an exclusive interview with Alice and David.

The Brothers Brick: How did the two of you meet?

Alice Finch & David Frank: The July 2011 meeting was our first SeaLUG meeting, and I remember David brought a part of his Dragon Knight Castle. Even though we were both relatively new to LEGO, it was clear that he was already building like an expert. We got to talking about castles — those that we’d seen in person and those that we wanted to build out of bricks — and we both mentioned how we thought building Rivendell would be the ultimate challenge. We’re both avid readers and dedicated Tolkien fans, so our friendship began with a thorough discussion of Elven architecture.

Over the last two years, we’ve had other projects that we focused on: David has built several castles, one with accompanying village and market, we both participated in a collaborative build of Hobbiton for SeaLUG’s display at Emerald City Comicon, and Alice built Hogwarts Castle. after our building skills had been honed on our own big builds, and with the second Hobbit movie about to come out, we decided 2013 was a good time to take on the challenge of building Rivendell.

TBB: In the movies, Rivendell is simultaneously sprawling and highly detailed. How do you even start a daunting build like that?

Alice: Our first task was to do research, which began with the laborious task of watching The Fellowship of the Ring — again. We got together and looked at the models in the movie, screen by screen trying to figure out how the buildings fit together and how we might approach the swooping arches and colorful roofs. Alice looked through all the “behind the scenes” and “making of” books on LOTR and found some of the original sketches for the models.

David: And I found a souvenir model that Weta Workshop made of Rivendell. It turns out that when they were making the Weta model, they had to do some serious research themselves because the film never really established what scenes happened where. The model was key as it allowed me to map out 48×48 sections in a Visio diagram to figure out roughly what size we would need to build it to.

TBB: Elven architecture in Tolkien’s artwork and Jackson’s films is very distinct, with swooping curves and intricate details that don’t easily lend themselves to accurate representation in LEGO. How did you approach this project from a design standpoint? 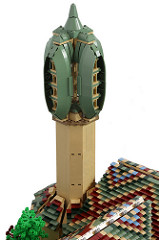 Alice: By the spring, I started studying some of the more interesting and potentially difficult parts of the model. The first thing I experimented with was the iconic tower from Arwyn’s building (far left of the model). I wanted to try out some of the large wedge pieces I had left over from some experiments I’d done for Hogwarts and thought they might just work. Again, it took some wrangling to figure out how to attach them, but I was really excited about getting that particular challenge ticked off my list.

I also did some studies for the roof design — 1×1 tiles, 1×1 round plates, and “cheese” slopes were all options to achieve the patterned designs. I tried them all — alone and together — and found that all cheese was by far the best and also had the most color options. Ideally, it would have been nice if LEGO would have churned out a few thousand sand red, sand purple, and sand blue cheese for me, but at least I had a drawer full of sand green to pair with the dark green, dark red, dark blue, and tan cheese. After all the patterned roofs were completed, I think we figured that there are about 8,000 cheese in the roofs and another 2,000 or so in the mosaic bridges and courtyards. 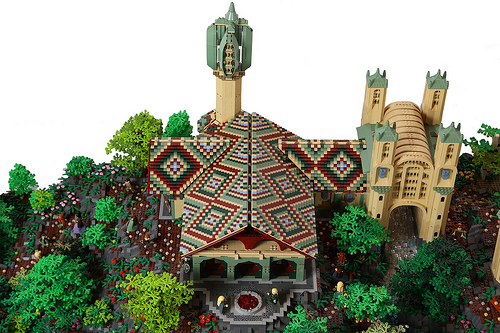 David: I had less actual buildings in my sections, so I really focused on blending what I had with the landscape. My main building really emerges from the rock and was built After the landscaping had taken shape. The actual buildings were very different than anything I have ever done as they needed to be airy and sweeping, so I focused on a more open design and heavily utilized odd angles to get a different look from the brick.

TBB: What part combination are you the most proud of?

Alice: In my prowling for interesting parts on BrickLink, I came upon the Gungan shields. My first thought was how they would make some very elegant Elven windows, so I ordered a few to investigate and see if I could make them work in an architectural setting. Figuring out how to secure them was a bit of a challenge, but with some experimentation I figured out how to make them cooperate inside the framing of some SNOT arches. 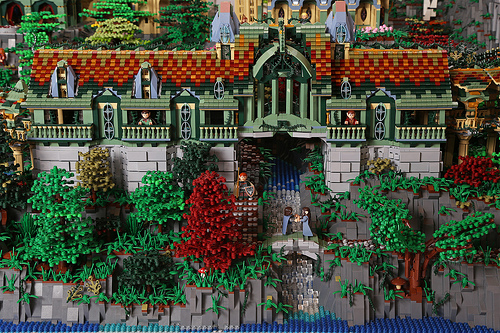 Once I figured out how to frame them, I designed the rest of the building around them, bringing in as much sand red and sand purple as possible. I’ve been collecting sand color parts almost since I first started building again, knowing that someday I wanted to do Rivendell and that if I wanted enough to build with, I’d have to gather them a few at a time.

David: Oddly enough, for me it’s simple 1×2 trans-clear plates. I had to figure out a way to represent horses emerging from waves and my part selection was very limited. I am very happy with the result. 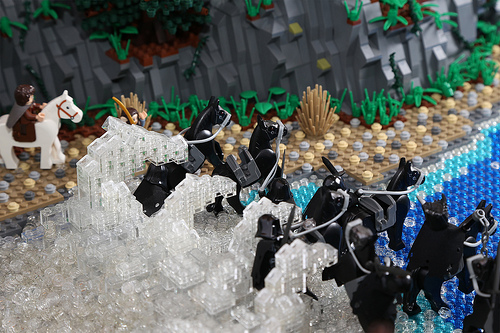 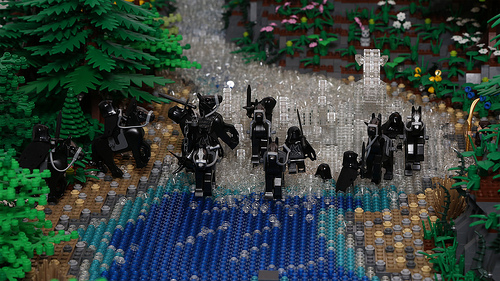 There are many other areas I am happy with, but given what I had to pull off, that would be it.

END_OF_DOCUMENT_TOKEN_TO_BE_REPLACED

Blake Baer and Jack Bittner showcased their third castle collaboration at BrickFair earlier this year, and now they have taken photos of the display for everyone to enjoy. The creation uses around 80,000 pieces and stands 4’8″ tall. It features a colorful marketplace, a beautiful wooded area and of course, the gate of Erebor. You can see the entire gallery on Flickr along with a video and a shot with the builders for scale. If you want to see construction photos, check out more on MOCpages. 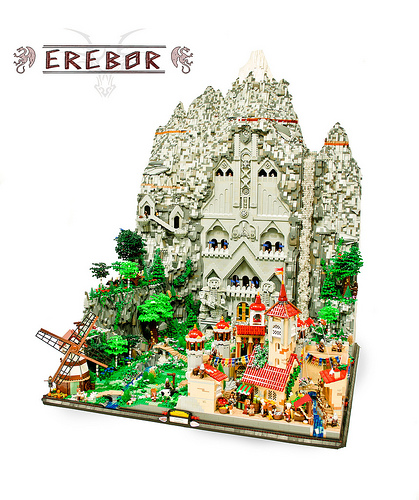 The ever-talented Pate-Keetongu brings us three of the most memorable dwarves you’re ever likely to meet: Bifor, Bofur, and Bombur from The Hobbit. I’m always impressed by how well skilled builders are able to imbue expressions on the faces of large scale characters using only a few bricks. You can read a bit more about them on Pate-Keetongu’s own blog. Pate-Keetongu says he’s building the whole party of 15 adventurers, which I can’t wait to see. 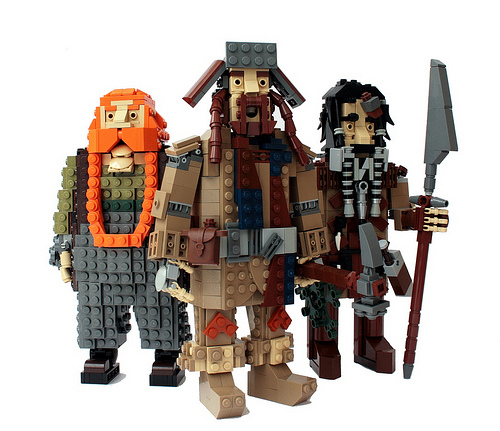 San Diego Comic Con 2013 started Wednesday night with “preview night”, which is more or less just another day at the con. The LEGO booth is in full CUUSOO and The LEGO Movie mode! 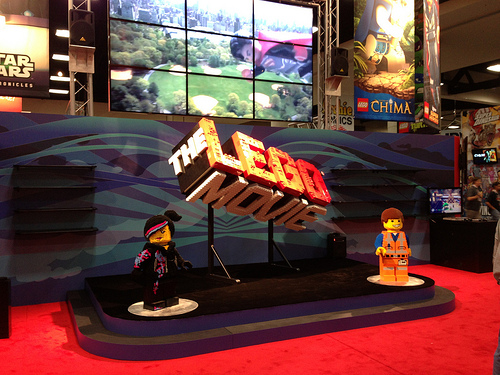 21103 Back to the Future CUUSSOO sets went on sale along with new Star Wars sets and much more! 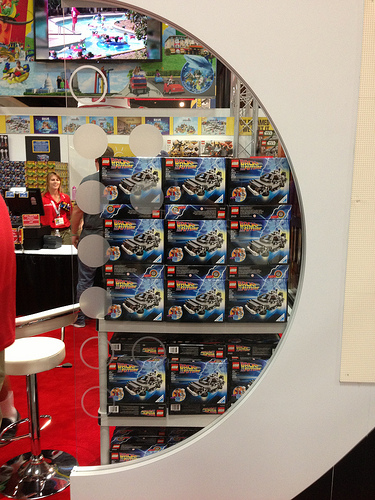 There are two exclusive sets that are ONLY available at the Convention and only available until they sell out. The LEGO Star Wars Jek-14 MINI Stealth Starfighter and The Hobbit Micro Scale Bag End are both $39.99. 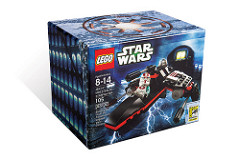 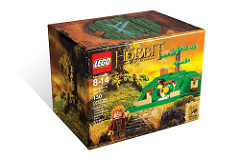 Resident mad genius and meme chaser Iain Heath has just put out a crazy video explaining how to dye your bricks. All you purists out there can put your pitchforks down and simply skip over this one, but for everyone else, it’s some pretty cool stuff whether you’re into LEGO mutilation or not. In this video Iain explains how he achieved the flesh tones used in his large-scale Gollum character. And for those of you who haven’t seen it, Iain’s previous video describing his design process for the accompanying Bilbo is also well worth a watch.

J.R.R. Tolkien was as obsessed by the geography

of his Middle Earth as he was by the languages of its peoples, drawing and redrawing its regions and landscapes in relation to the places his characters visit in The Hobbit and The Lord of the Rings.

Adam Dodge has built a LEGO map of Middle Earth, complete with the Anduin running between the Misty Mountains and Mirkwood Forest, the inland Sea of Rhûn, and the Ered Lithui encircling Mordor. 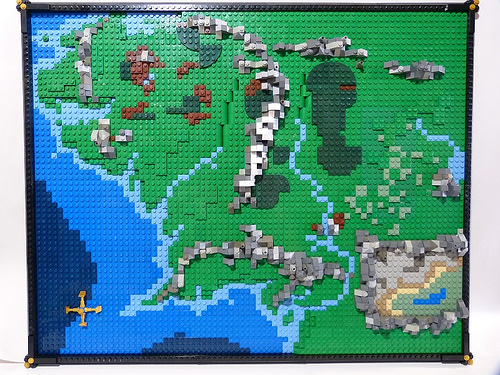 Adam’s map is partly three-dimensional, with mountains that rise from the map’s surface and a great crevice for the passage of the Loudwater leading downstream from Rivendell.

With this handy map in your travel satchel, I suspect it might be easy enough to just walk right into Mordor…

Hamster Productions made this short little video that mashes up PSY’s “Gangnam Style” (which is so 2012) with The Hobbit. We think you’ll like it.