One of our resident masters of Mecha Izzo Legostyle returns to give you the uncut fix you so desperately need. The model is based on Japanese Manga also known as “Linebarrels of Iron” that tells a boilerplate story of a bullied junior high school student who acquires super powers and a giant robot to dispense justice and one-liners while causing a great deal of mayhem. I’m not sure why, but my eye is drawn to those beefy yet precarious looking legs. 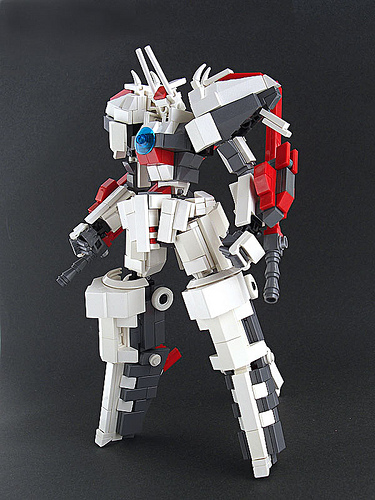 Joe Perez (MortalSwordsman) returns by popular demand with this manga inspired Angel Dragon. The builder calls it an “action figure“, and with a pose like this, who am I to debate such wisdom. 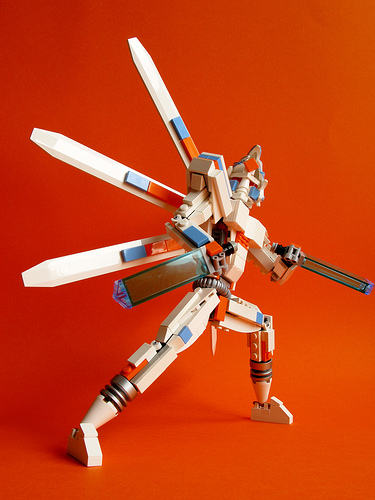 Welcome back fight fans, to Sin City Nevada for another tap-out edition of Friday Night Fights! Tonight’s bout is a classic match-up of hipster vs manga-nerd with street-cred on the line. Let’s go to the tale of the tape:

Fighting out of the red corner, from The city of big shoulders…Dave “The Killer” Kaleta and his “Bat-Cow and Robin“. 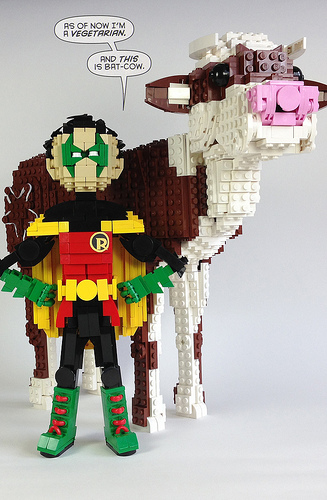 And fighting out of the blue corner, from the school of hard knocks…”Murderin'” Mike Dung (MikeVd) and his “misaka“. 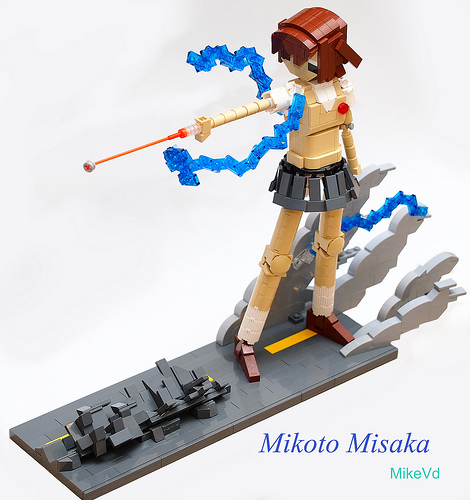 Brickshelf user tkh has some brilliant manga/hobby characters in his galleries. His latest, one Melissa Seraphy, is particularly amazing. 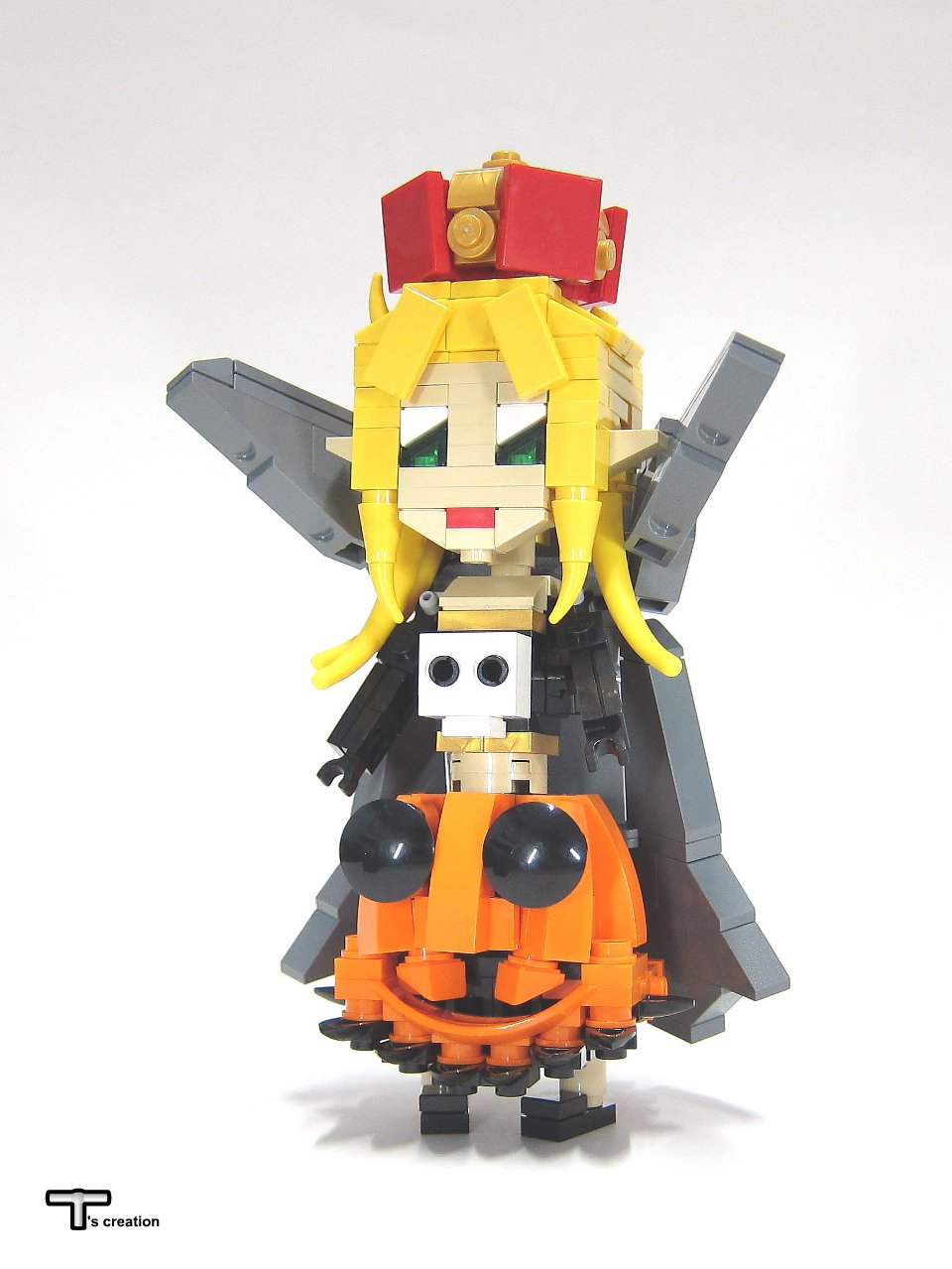 TKH takes to the sky with this creation based on the Manga and Anime, Strike Witches. I’m not an Anime fan, but I can appreciate this build. It’s quite unique, follows the subject matter very well, and looks awesome. What more could you ask for? 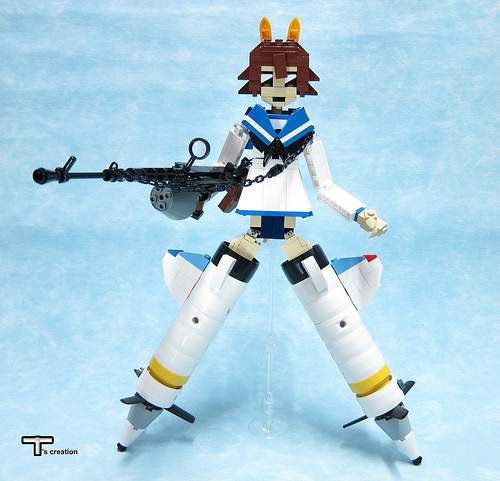 Though I am not familiar with the subject, this articulated master-piece by Mike Nieves really strikes a chord. It never ceases to amaze me how much personality can be portrayed with these little things we call LEGO. 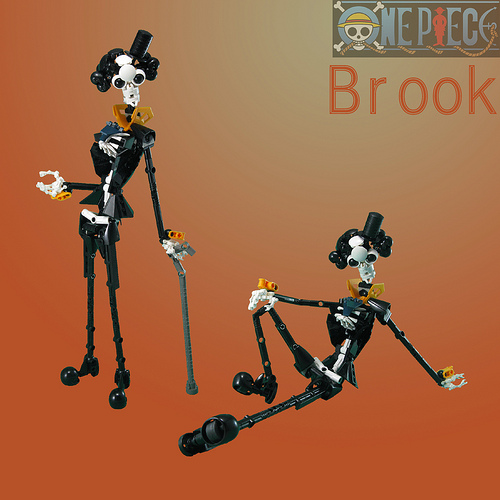 Iain Heath knows what I like. Hayao Miyazaki is my favorite director, and Nausicaa of the Valley of the Wind is easily my favorite animated movie — more so because I love the manga version that Miyazaki continued writing and drawing for ten years after the movie was released. Naturally, I prefer it in the original Japanese. 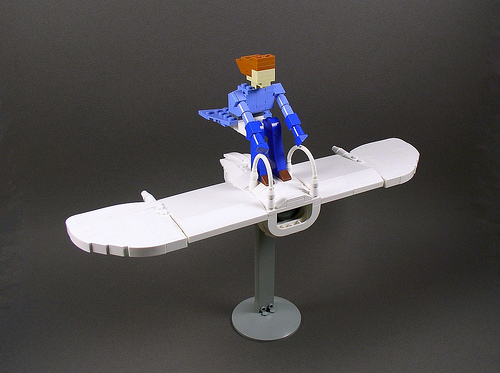 I’m sure you won’t begrudge me, dear readers, taking this opportunity to remind everyone that this is precisely the sort of wonderful LEGO model we’re looking for as part of the Big in Japan display at BrickCon.

I enjoy seeing genres and bandwagons being approached with a sort of irreverent creativity, so it was great to see this OTOMech Model TK-MM, built by Dave Sterling (half of ToT-LUG) for the 2009 MOClympics. It was inspired by the Otomen manga series and brainstorming with other LEGO fans, which is a great way to get silly ideas. 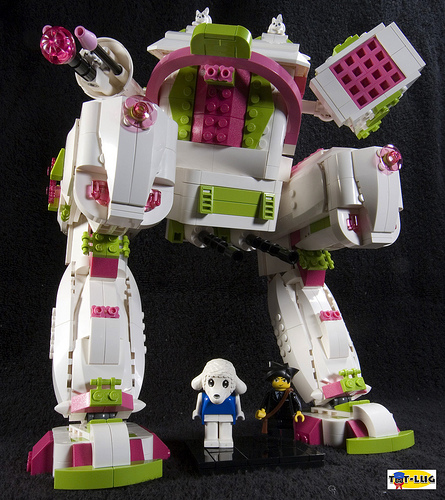 My favorite features are the kitty greebles and the simple fact that the cockpit fits a Fabuland figure, but there’s a lot of other stuff to love.

If you frequently browse Brickshelf, then you’ve probably seen the works of Tiger (tiger0207). To those who only know him by his works, Tiger is reputed as a LEGO comic artist who is skilled in producing comics and artistic LEGO graphics in Chinese. Those who’ve inquired a bit further into his works may have stumbled upon one of his three blogs. Now through a brief inside look at this visionary from the East, provided by TWLUG member CVSPIS_CELIDVS, we gain a glimpse of the profound builder known as Tiger and his unique works.

“Tiger, in playing LEGO, belongs to a league of his own, who is not only a custom artist but also a philosopher. He operates three blogs of different topics showing his techniques, imagination, and philosophy of life.

His first blog called Tiger’s Style expresses the builder’s thoughts and ideas about playing LEGO and likewise his minifig customization and scene designs. He uses not only official LEGO parts but also those of other competitive brands, commercial custom parts (e.g. BrickArms & BrickForge), and even those made from simple materials by himself.

His blog LEGO Martial Arts Heroes primarily shows historical oriental heroes and fictional knights-errant from Tiger’s imagination channeled through building, photography, and image-design. Martial arts fantasy, “Romance of the Three Kingdoms“, and “Journey to the West” are his favorite stories frequently told, of course, through LEGO. 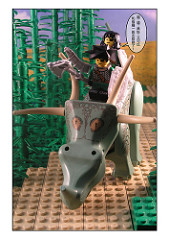 Tiger’s most recent work, “Journey to the West,” is recreated from a classic and famous Chinese folk novel, also the prototype of the manga/anime “Dragon Ball” created by Akira Toriyama. Another recent work, “Spirit War,” found its inspiration through the Six realms of the Buddhist cosmology. As a storyteller, Tiger masterfully conducts the scenes as comics made from LEGO.” 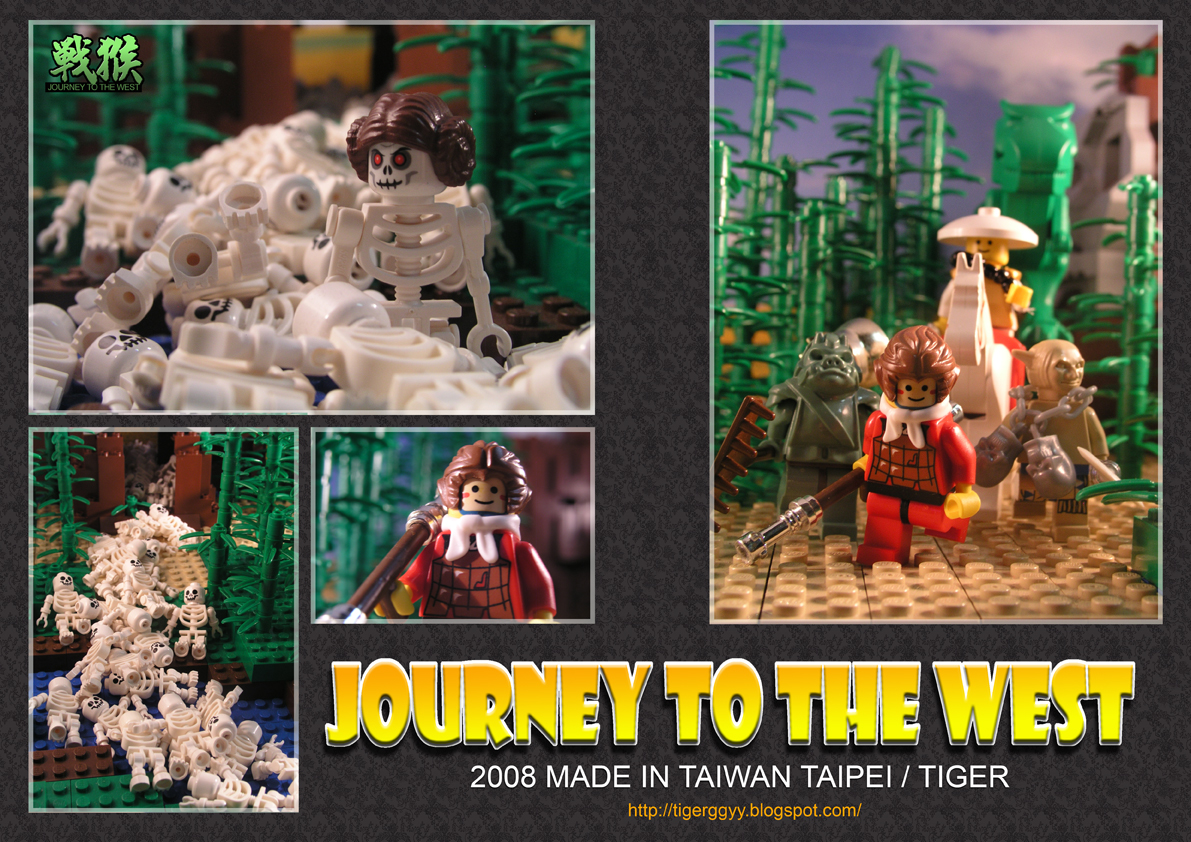 The average LEGO mecha we feature here are heavily armed, anthropomorphous robots. In other words, they tend to stand on two legs and go “pew! pew!” As much as I’m a fan of Gundam-inspired mecha, it’s nice to take a break and think about what mecha might really be like in the future — the blue-collar workbots of the space docks and maglev yards.

To that end, Izzo presents his “Sci-Fi Industrial Mecha Competition“.

Here’s one example from Izzo’s own repertoire — a railroad bot: Okay, this one’s bipedal, but still a great example of a construction mecha: Although Izzo is only accepting contest entries from builders over the age of 19 in Japan, that doesn’t mean you can’t take his contest as a challenge and build something cool yourself. Even if it’s not for a prize, I for one think the world could use more rail-laying, cargo-hauling, sewer-cleaning, reactor-scrubbing mecha.

To get you started, here’s Izzo’s great list of inspirational links: Who needs prizes to motivate you when the end result can be this cool? Get building!

So, Jamie Neufeld is just awesome. Proof? His akira-inspired bikes should be proof enough: 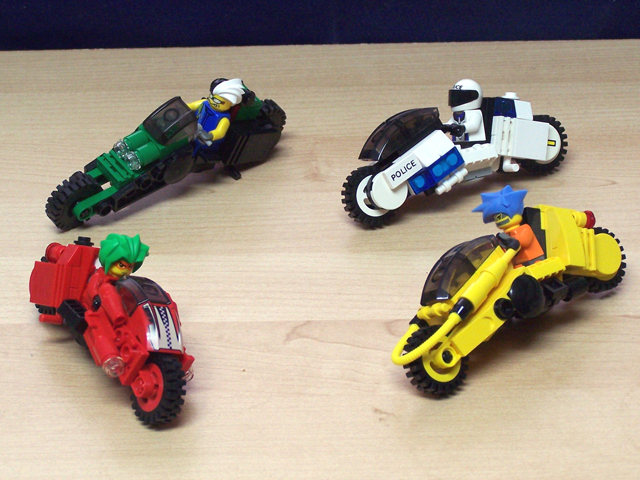 I credit Azumu as one of the bloggers who got me into blogging just over a year ago, with his regular “best of Brickshelf” posts on LEGO-BINGO. But Azumu is also a consummate builder — his brick-built Pokemon are especially fantastic, even if you’re not a fan of little creatures who only say their own name.

So it was wonderful to click over to his blog post and see some great minifigs inspired by comic book artist Buichi Terasawa’s Space Adventure COBRA. Here’s the space pirate himself: 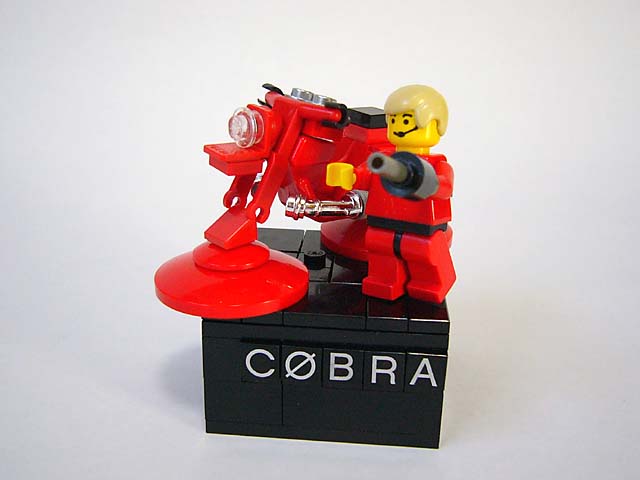 Click the picture for a gallery full of wild characters.