Sometimes, imagined history can be as colorful as the real thing (which I typically find more surprising than fiction). Talented historical builder Josiah Durand is no stranger to the Aztec and early colonial period of history — we’ve featured his ruined pyramid of Tenochtitlan and Mesoamerican ballgame scenes previously. But in his latest scene inspired by Pre-Columbian civilizations, Josiah imagines what might have happened if a smaller group of Spanish Conquistadors had attempted to wrest riches from the Aztecs decades before Columbus sailed the ocean blue. Things do not appear to be going well for the Spaniards…

Josiah incorporates elements from the Aztec Warrior minifig in the Series 21 Collectible Minifigures, mixing the pieces so each warrior is unique. Behind the minifigs, microscale palaces and temples provide a forced-perspective background, with a mountain range behind them. Beneath, transparent bricks arranged on their sides serve as a highly textured water surface. But my favorite detail is the pair of Aztec statues on the lift side of the scene, with distinct noses and feathered crowns. Titled “La Noche Triste” (“the sad night”), I’m personally rooting for the indigenous Aztecs, and won’t be especially sad if the invading Conquistadors meet a sticky end atop those distant pyramids.

I’ve never been a huge train person. I mean, I like trains and all, and love watching them thunder by, and enjoy building elaborate tracks with my kids for those little wooden magnetic trains, but the LEGO train itch has passed me by completely. Perhaps someday I’ll construct a train if I ever get around to building a large-scale city diorama (after I win the lottery or suddenly come into money, to pay for all the bricks), but not until then. Not so for Josiah Durand, as he demonstrates with this superb military train scene. It’s got everything you could want, from a chunky engine to various types of cars, especially that anti-aircraft gun car, and the landscape is also eye-catching.

Unlike with most train dioramas, the tracks are completely brick-built, rather than using the standard track elements. Additionally, the wheels seem to be a combination of wagon wheels, dishes, steering wheels, and other round things, rather than the typical train wheels. The fill-in between the ties and rails is an odd assortment of small, textured dark bluish grey pieces, especially chains and stud shooter triggers (I love seeing those triggers pop up in builds!). The only thing that seems odd is that the ties are grey and the rails brown when usually it is the other way around unless it is such an old track that the wood has greyed and the metal rusted. It’s nothing to get steamed up about, since either way this is still one good looking train display. 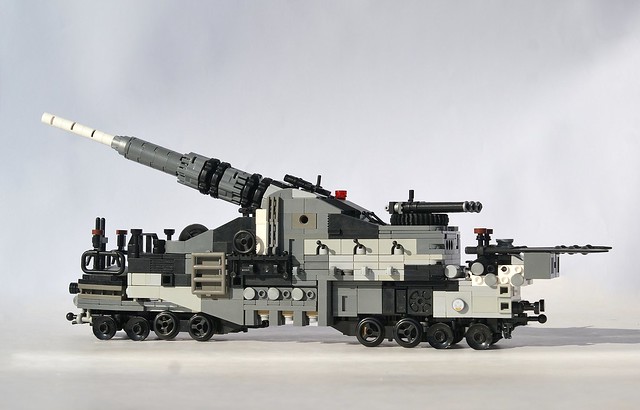 Love trains more passionately than I do? Then check out the TBB train archives! 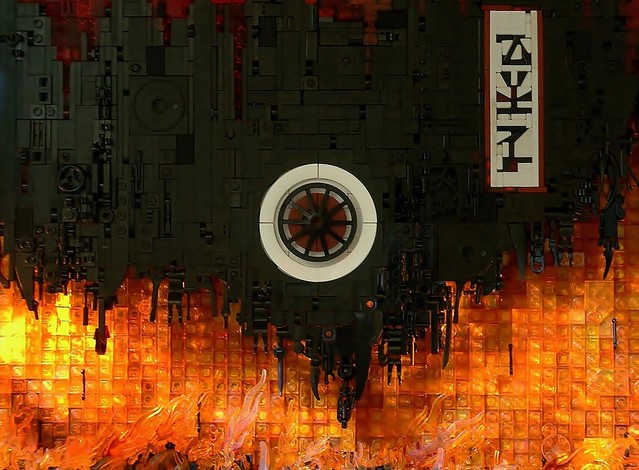 There’s a definite art to building ruins out of LEGO bricks. They aren’t the best medium for it, quite frankly, since the plastic is usually (unless they’re old and much loved) bright and shiny, the edges crisp and square. And ruins are usually dull, dirty, and broken apart. There’s a tendency to try to over-do it and add studs everywhere, or round elements, or a bunch of different colors, and the shape often gets lost in the busy clutter that the build ends up being. But in the hands of an eminently talented builder like Josiah Durand (a.k.a W. Navarre), ruins can be a glorious thing, awe-inspiring just like the real thing in the jungles of the Yucatan. This one is not any one in particular, but the Mayan ruins at Tikal and the Aztec ones at Tenochtitlan served as inspirations. 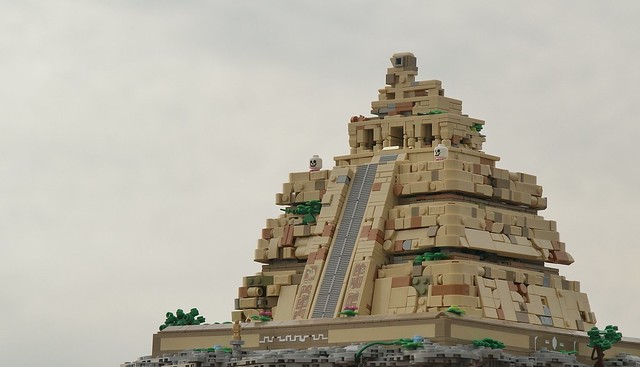 The steps are excellent with their grille-brick texture, and the mix of smooth surfaces and studs is just right. There are many colors, but the muted earth tones all work together, and even match the printing next to the steps. The skulls give it the grim ambiance associated with the human sacrifices performed at many such sites, and the tiny statuettes give it some scale. And the lighting is perfect on this one, with slightly overcast South American sky giving it a real-world vibe. It looks almost like the real thing! Now that is the mark of some good LEGO ruin building. Take notes, aspiring builders!

Often, art ends up being a family business. How many Bachs and Strausses and Brueghels are there, to name a few? In the LEGO world, there are few notable families, too, one of which is the Durand clan. They boast such talents as Geneva (formerly known as KaiNRG), Isaiah (also known as Robert4168/Garmadon), Josiah (also known as W. Navarre), Sarah (also known as 24 Cupcakes), and Anna. All but Isaiah contributed to the collaborative build category of this year’s Summer Joust (put on by another famous LEGO family, Isaac and John Snyder), and the resulting story told in bricks is breathtaking. They opted for a full-frame, all-LEGO format for their presentation, which is exactly my cup of tea. They are telling, in four builds, the story of Ladyhawke, a 1985 medieval fantasy movie starring Matthew Broderick and Michelle Pfeiffer. The story begins in Aquila, built in technicolor by Josiah.