Often, art ends up being a family business. How many Bachs and Strausses and Brueghels are there, to name a few? In the LEGO world, there are few notable families, too, one of which is the Durand clan. They boast such talents as Geneva (formerly known as KaiNRG), Isaiah (also known as Robert4168/Garmadon), Josiah (also known as W. Navarre), Sarah (also known as 24 Cupcakes), and Anna. All but Isaiah contributed to the collaborative build category of this year’s Summer Joust (put on by another famous LEGO family, Isaac and John Snyder), and the resulting story told in bricks is breathtaking. They opted for a full-frame, all-LEGO format for their presentation, which is exactly my cup of tea. They are telling, in four builds, the story of Ladyhawke, a 1985 medieval fantasy movie starring Matthew Broderick and Michelle Pfeiffer. The story begins in Aquila, built in technicolor by Josiah.

The scene is huge, with towering walls and even-more-towering towers, giving an excellent backdrop for the lower buildings inside the walls. The camel and the tan shops give a distinctly Middle Eastern feel, and the cloth elements and vegetation give it a pleasing organic look. There’s a bit of everything in the techniques used, with studs up, down, and sideways, and even some lovely use of anti-studs for texture. It provides the perfect backdrop for Navarre to enter the city on his mission to kill the archbishop.

Next up is Sarah’s build, with the hero mounted on a horse kicking open the doors of Aquila’s cathedral. Those doors are the highlight here, with inset paneling that is not too shallow nor too deep, but a Goldilocks-approved just right. The pavement is also worth a closer look, with oodles of 1×1 round tiles painstakingly arranged for an intricate cobblestone. Will the hero, Navarre, get inside in time? 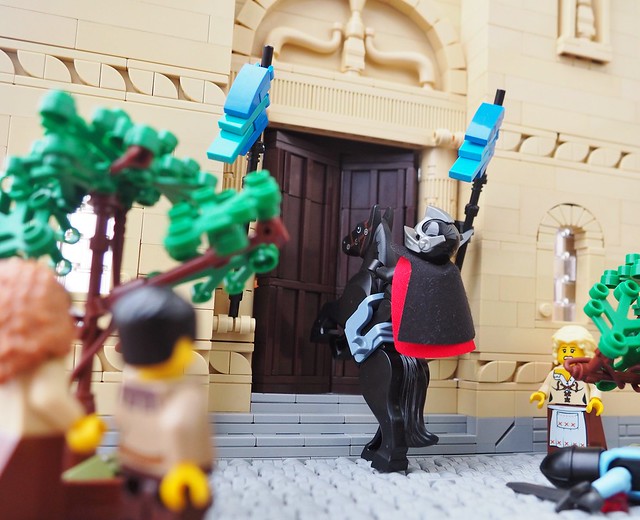 Geneva provides the interior of the same doors, where the hero battles with the Marquis. Navarre has already unhorsed his opponent, who has thrown his helmet, which is moments away from shattering the window above the door. Notable here is the scale of the columns and arches. Having done some similar arches in the past, I can say with some confidence that the task of fitting all those loose segments in the arches must have been a pain; but the result is worth it. 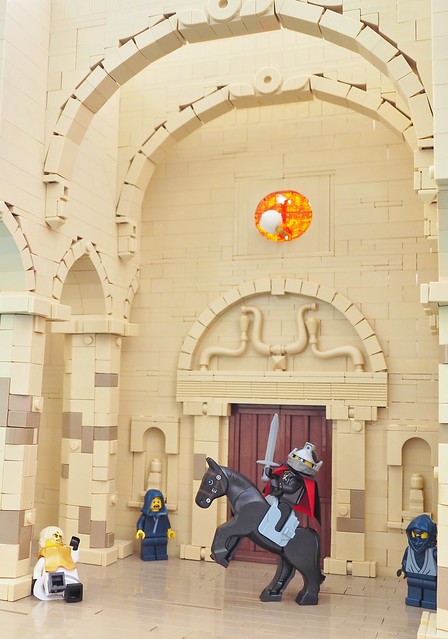 The final scene was built by Anna. Just moments away from killing the archbishop, Navarre is stopped by the voice of a woman, Isabeau, the titular Ladyhawke, and instead of killing the cleric the curse is lifted and everyone lives happily ever after, or something like that (is anyone really happy forever, though?). Here, like in the previous build, the scale of the arches and roof make the build impressive. To give the feeling of age, Anna has used not pretty and clean white bricks, but dirty and stained white bricks; some might object to such ugly old things being in a serious, big-kid build (dirty and scratched bricks are fine for little kids and their rainbow-explosion creations, but not for published builds in international building competitions, right?), but I think it looks perfect. I also like the use of the cross-shaped Technic connectors as crosses in the woodwork. 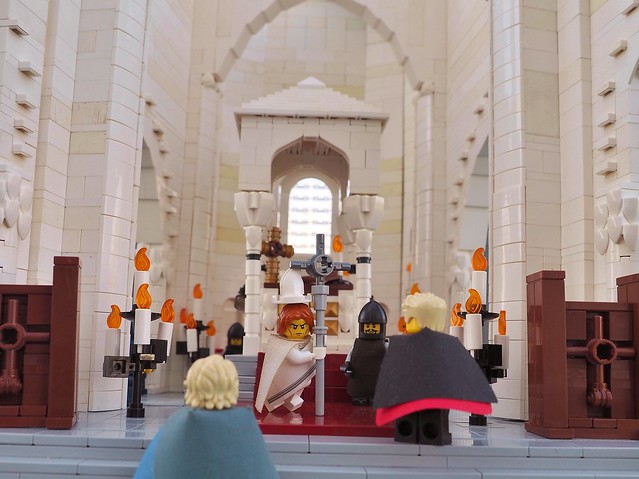 The story told in bricks is brilliant, but even better in my opinion is the fact that the team was made up of siblings; their parents’ Christmas and birthday gifts for their kids must be entirely LEGO sets! I hope my own children will enjoy building together, too, and be even half as talented as the Durand siblings.

4 comments on “A story in bricks: Ladyhawke comes to life in a family affair”