You may occasionally still see the unmistakable Citroën 2CV gliding along the lanes of rustic French towns, some 70 years after its first introduction. Builder Nico71 pays homage to the iconic economy car with this 1/15 scale model. 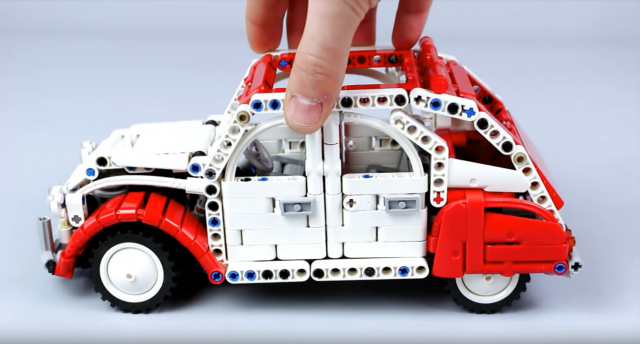 The model features independent front suspension and rear suspension, opening front and rear doors, wheel-operated steering, and an opening trunk compartment (with a surprise hidden feature inside!). It also sports many brick-built stylistic touches, from the engine under the hood to the exhaust pipe in the back.

Rather than using Technic panels, each door consists of multiple Technic beams stacked pin holes-up to form a single, solid surface. Likewise, the roof, A-, B-, and C-pillars of the 2CV combine multiple beams to create the silhouette of the vehicle. The wheel wells and mudguards, however, show the curved building technique that strings Technic 1 x 3 beam pieces along a soft axle hose, creating an elegant arch. It’s a similar technique to one the that impressed us in the recent Shanghai LEGO Architecture set, where it was used to construct the twisting Shanghai Tower.

You can read more about the design and functionality of this model from Nico71’s website.

Yes, the future is now! No more tying your own shoes: Flickr user vmln8r has designed the “Self-lacing shoe.” Better late than never, Marty!

The design looks simple and requires relatively few parts. The single axle accomplishes the real work of winding the shoe laces taut. The genius of this contraption, I think, shines in how the powered components—Power Functions L-Motor, IR Receiver, and AAA Battery Box—wrap snugly around the sides of the shoe. The transfer of power bears attention, as the machine uses a series of gears, including a worm gear, to direct the twisting motion from the vertically-oriented L-Motor to the horizontal axle. 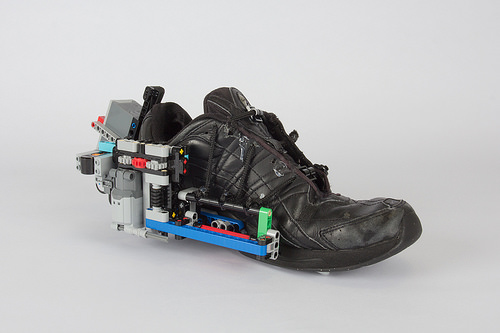 In case you’re wondering: yes, the contraption works! You can watch the self-lacing shoe in action in this YouTube clip:

Elegant, functional mechanical models don’t need to be large. In their “LEGO Technic Micro Stepper Mechanism” video, Lego Technic Mastery demonstrates how to build a simple, manually-operated stepper motor that can attach to any Technic beam. This stepper machine has four 90° stops, allowing for precise quarter turns in both the clockwise and counter-clockwise direction.

At 0:56 in the video, Lego Technic Mastery provides a shot of all the parts needed for this mcahine plus step-by-step instructions. I followed the instructions and built my own “little stepper” with little difficulty (although I did break a LEGO rubber band in the process).

Green Gecko has posted a video of the complete hot rod that includes body panels, a mean-looking front grille, opening doors, and chromed pipes. This video also shows the custom controller for the full remote control car, which includes a pair of cylinders that control the steering and a pneumatic switch to control the engine.

Just as the Lamborghini Centenario pays homage to the vision of Ferrucio Lamborghini, this LEGO Centenario built by Lachlan Cameron gives tribute to the already iconic supercar. Clad in black with red highlights, this model features illuminated headlights and taillights, elegant scissor doors, chromed tailpipes, and even a personalized California license plate! The wheels from the Porsche 911 GT3 RS complement the overall impression of this model. 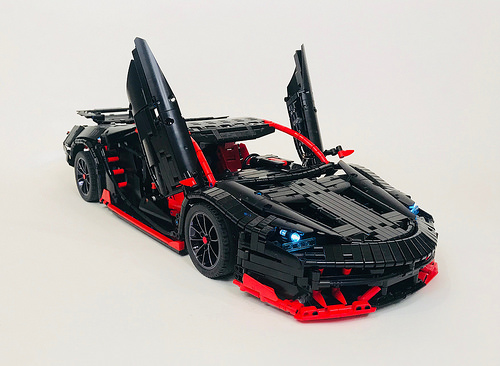 END_OF_DOCUMENT_TOKEN_TO_BE_REPLACED

In its own rights, the 42054 CLAAS XERION 5000 TRAC VC tractor amazes with its sturdy yet functional design. That said, the essence of the tractor is actually doing things, performing work, getting business done. In this spirit, Brick Wall used the CLAAS Xerion tractor model as a platform for some fantastic—and practical—attachments. 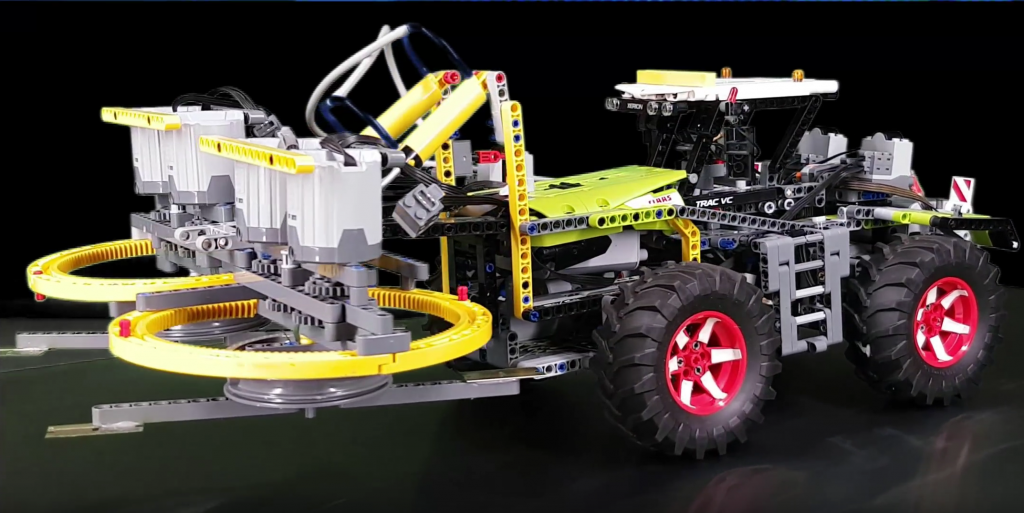 Need your lawn mowed? Take a look at this functional, real lawn mower attachment, each blade powered by two motors working in parallel. (In all seriousness, don’t try this at home: those are real razor blades.)