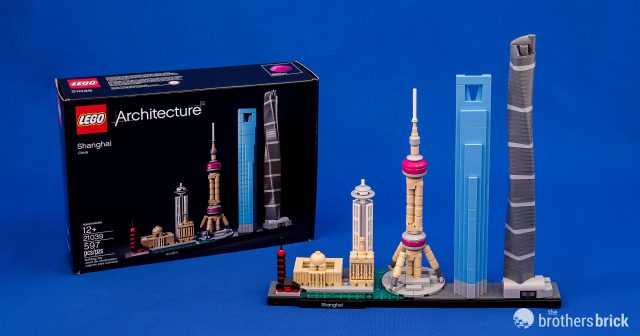 While the set is technically the second largest Architecture skyline set by piece count (one less than 21028 New York City), Shanghai is largest by any other measure, ranking as the tallest, widest, deepest and heaviest of the skyline series so far. 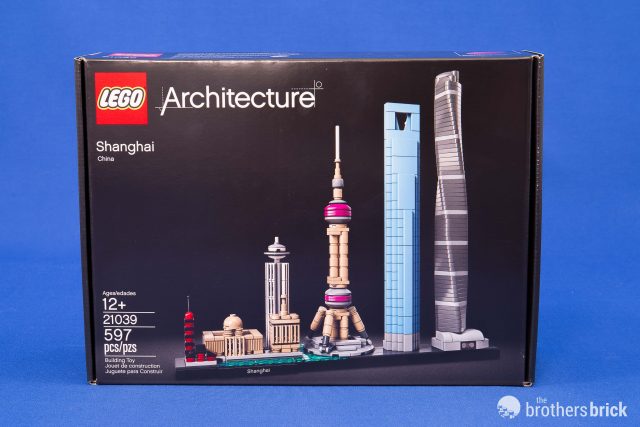 The back of the box features comparison photos of the LEGO builds and the landmark buildings they represent. Right off the bat, you can see that the architecture in Shanghai ranges from art deco to contemporary, with structures that pierce the sky. 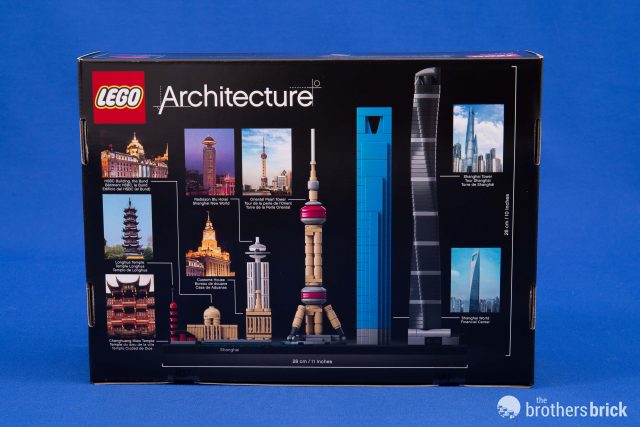 Opening the box reveals six unnumbered bags and a perfect-bound instruction booklet that together nearly fill up the box. The 174-page instruction booklet includes a brief history about each of the buildings, repeated in three different languages, English, French and Spanish. 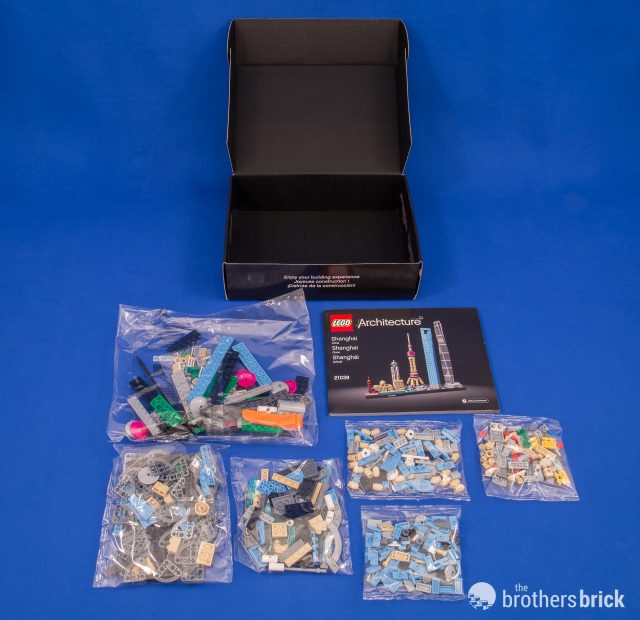 With stunning pictures and details about each of the seven structures, the actual building instructions don’t begin until page 45. This has an added benefit of helping keep the booklet open while building, as perfect-bound instructions tend to close annoyingly on their own when laid flat with most of the pages on one side (as happens near the beginning of builds). My only criticism of Architecture instruction books is the black background printing tends to pick up fingerprints everywhere when used. 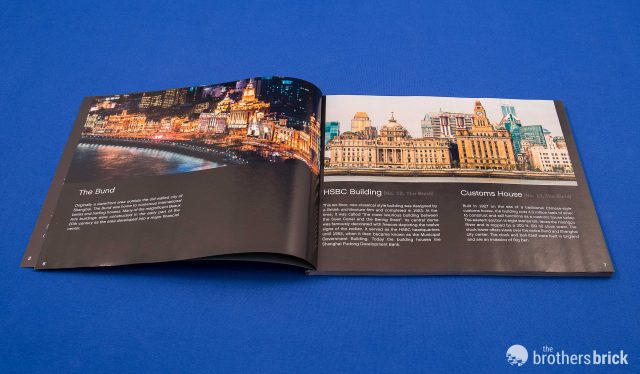 The actual build process starts with the base layout and utilizes the same 4-stud depth standard as other skyline sets. Modified 2x6x 2/3 plates with 4 studs on the side are used to eventually attach black tiles sideways, ensuring an elegant edge. Yellow 1×2 plates with handles are secured over smooth tiles to create a firm foundation for a future connected building.

The base footprint shows the plate jutting out that will accommodate the full circular base of the Oriental Pearl Tower as well as the entirety of the Raddisson Blu Hotel. This makes Shanghai double the typical four-stud depth of the Architecture skyline series. The plate work is done in green to be covered with trans-light blue tiles representing the Huangpu River, a technique similar to the murky waters surrounding the base of 70620 Ninjago City.

The base is finished off with multiple 2×3 dark grey tiles and a printed Shanghai tile, the only printed piece in the set. The foundations of several classic-style buildings are built left to right in tan.

Simple micro versions of the Chenghuang Miao Temple, Longhua Temple and Pagoda, HSBC Building, and the Customs House are built along the water’s edge. These builds are about as small as you can make them, though it’s understandable in comparison to the large buildings to come. 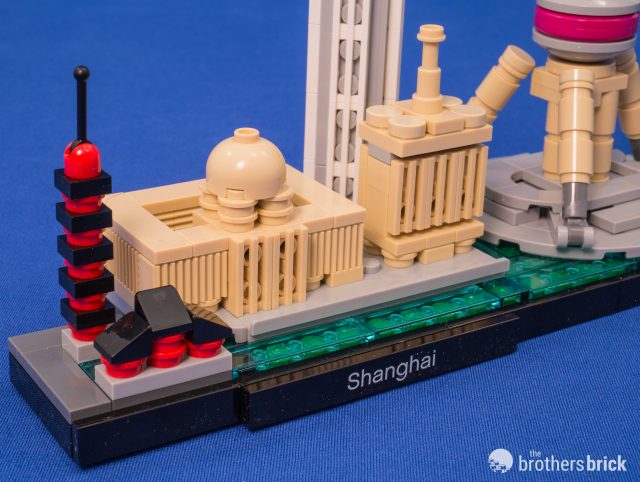 The Radisson Blu Hotel features the set’s first somewhat complex building techniques, using 1×1 bricks with studs on all sides to essentially create a walled column, finished with light grey rail plates and white grill tiles for texture. The building is connected to the base by inserting a brown rod through the inverted brick and attaching it through two 1×1 plates with vertical clips built into the base. The building is free to rotate 45 degrees, though the bottom clip has a tendency to pop off the base when connecting the two sections if both are lifted, so I recommend inserting the column with the base flush on your building surface. 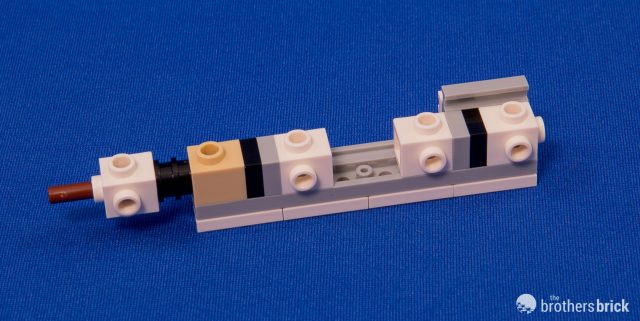 At this point with nearly five structures created, the build has felt fairly simple, but the second half of the Shanghai skyline is where this set really takes off. The base of the Oriental Pearl Tower contains a plethora of newer pieces, including quarter circle, 2×2 macaroni, and 4×4 wide macaroni tiles in light grey. The curved pieces allow for 1×2 plates with handle clips to be rotated 45 degrees to eventually angle the legs of the tower. 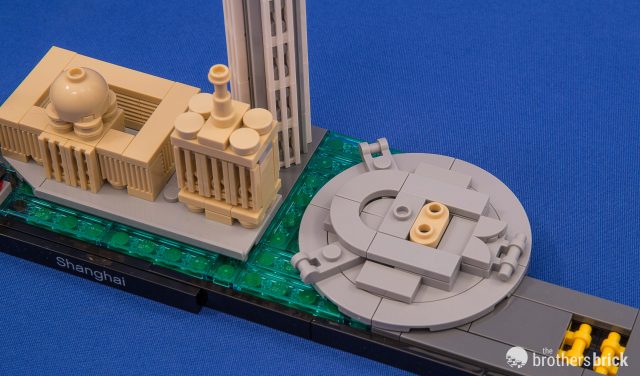 It is at this point where we get our first new piece of 2018, a rounded 1×2 plate with open studs in tan. Though this piece was spotted as early as July last year in early promotional photos for 2018 DC Comics sets, this is the first time it has been available in a set for purchase. The piece is incredibly useful and will no doubt become a building staple due to its ability to curve multiple plates as well as insert multiple rods. I foresee many curved castle walls, textured moats, and curved chain creations when this piece is available in either shade of grey (hopefully soon). 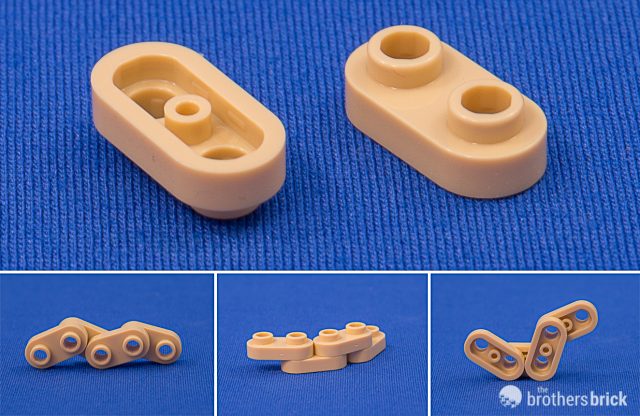 As exciting as this new piece is, none of its amazing functionality is used in Shanghai. Instead it’s substituted in where two 1×1 round plates with open studs could have been used for the same effect. The main structure of the Oriental Pearl Tower is supported by three vertical legs, used stacking 1×1 cylinders with an interesting inversion halfway up. 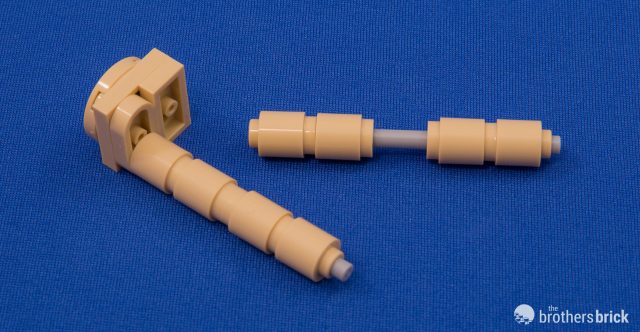 Magenta 3×3 inverted radar dishes are used to form the two spherical domes of the futuristic tower, a new color for that part. The bright magenta really stands out against the tan and grey skyline and is a much welcome addition to the typically muted color palette of the Architecture series. My only criticism is that the three angled legs feel one plate too short each, in order to really convey that they are supporting the weight of the tower. 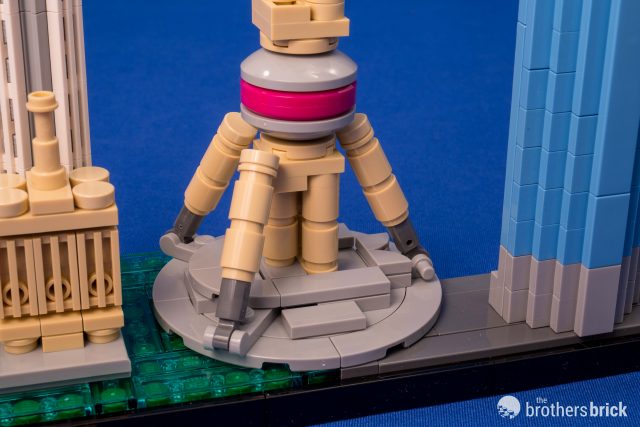 From above, you get a good look at the diversity of the structures so far, with different building techniques used for each. While the scale of each of the buildings is not consistent, the enormity of the last two towers makes the previous six feel tiny in comparison. 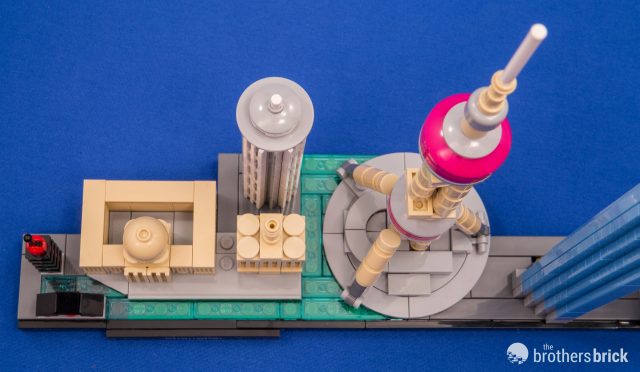 The seventh building, the World Financial Center, is made out of stacked medium blue jumpers and tiles, giving the appearance that it is reflecting the blue sky. Known locally as “the Bottle Opener,” the LEGO version is shockingly straightforward, simply employing an incredible number of jumpers to give the building its iconic shape.

A plethora of the newer 1×3 double jumpers are then used to properly center the angles of the building, as well as provide structural support. This fairly new piece, also seen first in 70620 Ninjago City, is provided in bulk with 32 in medium blue and four in light grey. 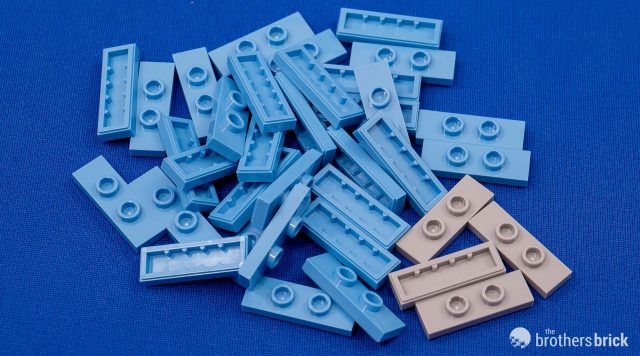 Several 2×3 medium blue tiles (new in that color) are used to smooth out the front, while more 1×3 double jumpers are used on the back to continue the diamond shape of the building. Two thin 1×6 plates are used to suspend some jumpers and a 2×3 tile onto the back of the building. It’s an interesting technique and is likely used to make all the jumpers easier to align. The back showing the exposed undersides of the plates is somewhat jarring compared to the smoothly tiled front, but from a distance they almost resemble individual window frames. 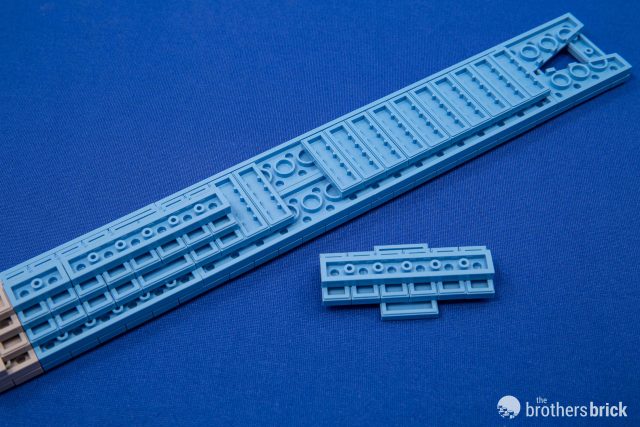 The last building contains perhaps the most creative use of parts in order to replicate the spiraling curves of the Shanghai Tower. After constructing an expertly crafted light grey foundation, a stack of 57 thin 3×3 Technic liftarm pieces with curve is built around a central Technic axle core, with two soft axle hoses to orient the stack. 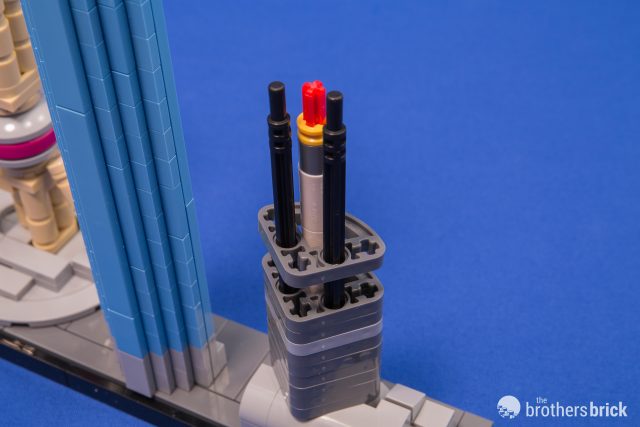 The stack is then rotated by hand and locked into place on the central core, creating the gentle curves of the world’s second tallest building (following the Burj Khalifa in Dubai). The tower is capped with two 1×3 Bionicle tooth pieces in dark grey (a new color for that part as well) to imitate the arched roof. 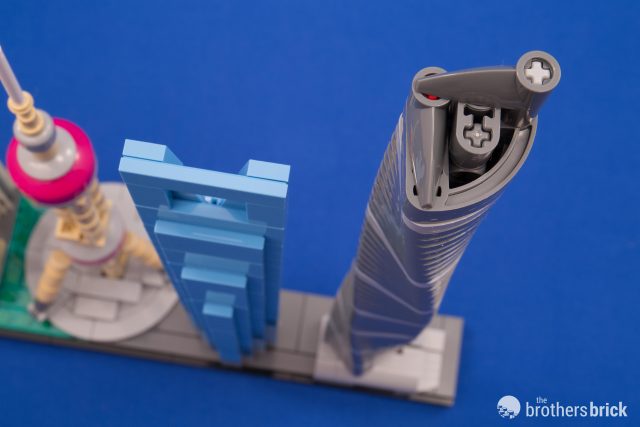 The completed Shanghai skyline is a pleasure to behold, with new and old architecture styles mixing and providing the visual feast of colors and textures that the city is known for. Each building utilizes different building techniques that are quite enlightening to experience. While many Architecture sets suffer from repetitive building, this set was very fun to construct (taking an hour and a half, including a quick sort of pieces). 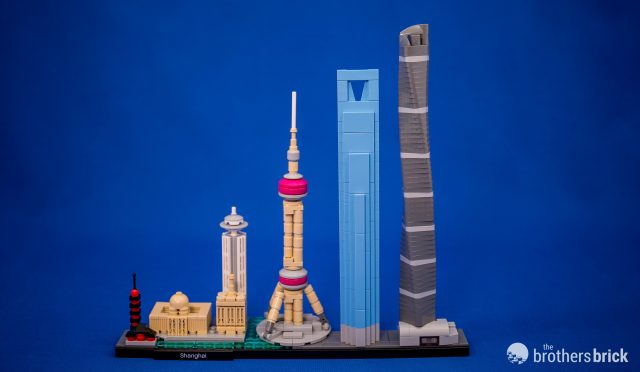 This is the second-largest Architecture skyline set by piece count, but it feels like the hero of the Skyline subtheme as it reaches taller and weighs more than any other skyline set. The model is even bigger than that implies, coming in at double the width and height of most other skylines, proving that you shouldn’t judge a set by piece count alone. When moving the set, the buildings tend to be a little wobbly because they are so tall and thin, but when at rest they are solid. From the back, the set looks just as interesting as the front, hiding no detail and giving the ability for it to be viewed from all angles. 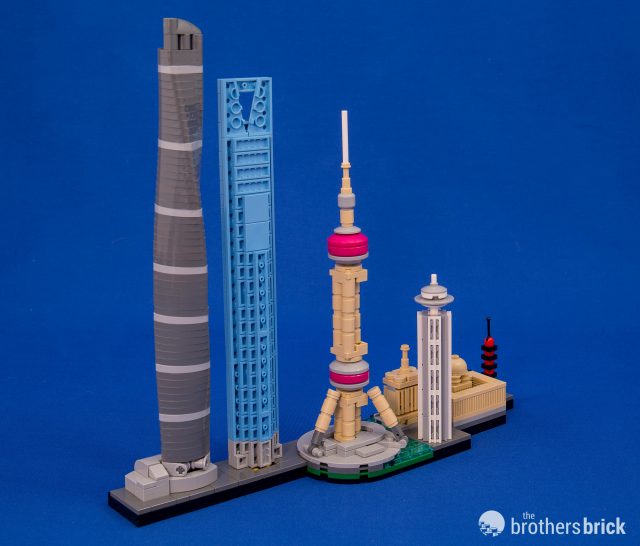 My favorite angle of the set is the unexpected side view, showing the staggered heights and placement on the base of the skyline. This shot really conveys Shanghai’s rich collection of unique buildings and architecture styles, all packed into a constantly evolving and ambitious skyline reaching toward the future, and all expertly rendered in LEGO form. 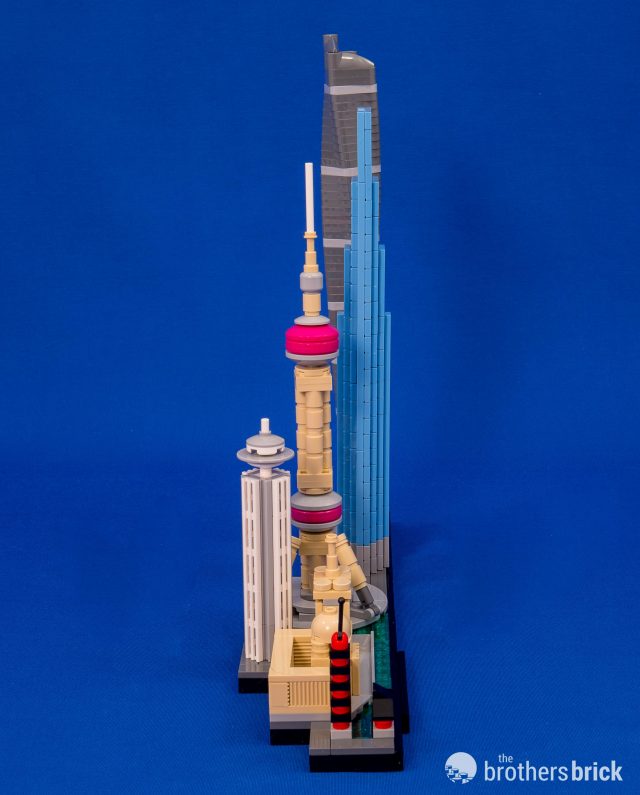 On a personal note, I own and have built every Architecture set, and this is among the most entertaining builds of the skylines subtheme. It is a master class in jumper usage and continually made me think “nice part use!” That, in combination with a good sprinkling of new and rare parts, makes 21039 Shanghai a must have for any Architecture fan or LEGO builder in general.

21039 Shanghai will be available on January 1 from the LEGO Shop online.