Rather than focusing on changes within the LEGO fan community over this past year, I thought it would be more interesting to explore some of the differences between 2005 and 2010.

Half a decade in the LEGO fan community

When I started The Brothers Brick back on July 25, 2005, the world of LEGO fandom was a very different place. Though LEGO fans had begun to carve out spaces of their own throughout the Internet — mostly on forums like FBTB and Classic-Castle.com — we all posted our photos on Brickshelf and at minimum lurked on LUGNET. BrickCon drew a mere 45 attendees in 2004, while BrickFest ruled the convention scene with 250 attendees in 2004 and 330 in 2005.

How times have changed.

I asked several people what differences they’ve observed over the past five years, and here’s what they had to say.

With a few exceptions, the overarching theme among these changes is decentralization and greater choice for LEGO fans. We’ve all worried about the fragmentation of the LEGO fan community, but so far what we seem to be experiencing is growth — with the specialization that comes with that growth.

Let’s hope we see even more growth over the next five years.

As always, here are some stats for this past year.

We’re still waiting for our first reader in North Korea… 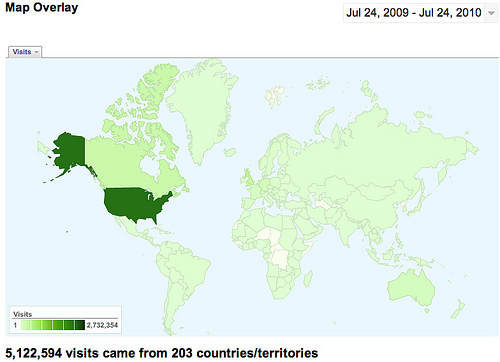 The top 30 countries from which people visit The Brothers Brick didn’t change much, though New Zealand jumps quite a few places (up 73%), while the Czech Republic (up 64%) and Croatia (up 172%) edge out Malaysia and South Korea.

Like last year, search engine keywords seem to be mostly about news items, while more and more of our traffic comes from fellow LEGO sites rather than sites outside the LEGO fan community.

Most of the top 10 posts over this past year were again news items — the most devastating among them the loss of a prominent member of the LEGO fan community.

24 comments on “Five years of The Brothers Brick”