Marc Reid imagines the logical evolution of the Maersk shipping company (and corresponding LEGO sets perhaps?) into the far future with the MAERSK LINE 976534 SPACESHIP. According to Marc, each shipping container would be a mile long – which by my calculations is large enough to ship an entire shipping company! 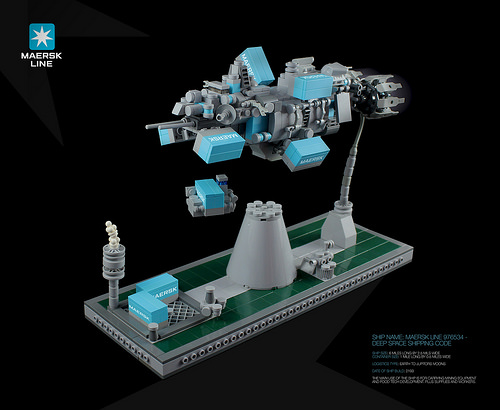 I love the idea that the even as the technology and environments change, the Maersk containers would retain their iconic look over the centuries. In fact, I think it’d be cool to see other builders interpretations of the Maersk line in increasingly distant periods in the future. Get to it, my friends!

Today at the Skærbæk LEGO convention in Denmark, LEGO unveiled a new addition to the Maersk line, which be available starting in January 2014. Worth noting is the fact that this ship is not LEGO’s special “Maersk blue” as all the previous sets in the Maersk line have been since the 1970’s, but instead is the new medium azure. Presumably this means that Maersk blue has been permanently phased out.

Here is the official press release:

US $149.99 – CA $179.99 – DE 129.99 € – UK 109.99 £ – DK 1199.00 DKK
Presenting the largest ship in the world – the record-breaking Maersk ‘Triple-E.’ Built from over 1,500 bricks, the model recreates the real vessel in amazing detail. Our LEGO® designers have included rare colors such as medium azur, dark red, sand blue and sand green. There are rotating gold-colored screw blades leading to the brick-built twin propeller engines, which you can view through the window built into the port side of the ship. You can even customize it by adding or removing the containers. This authentic set includes a display stand and fact plaque with detailed information about the ship and, as a finishing touch, there’s the gold coin that is added under the mast of all Maersk Line ships for good luck on their voyages. This model is perfect for LEGO fans!

Click the picture above to see all of the images, and watch the designer video below:

Following the release earlier this year of 10155 Maersk Container Ship

As we announced back in February, the set comes with 1,234 pieces and costs 120 USD. 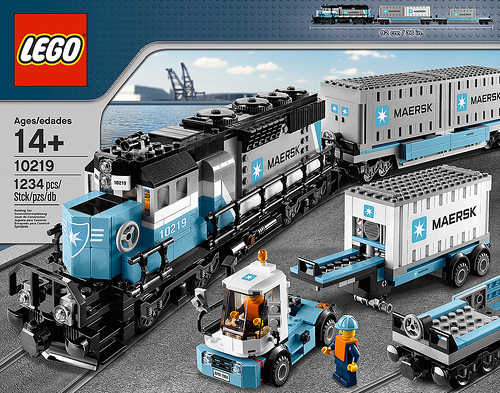 The new version has two more pieces and the sticker/decal says “Maersk Line” instead of “Maersk Sealand,” but the set appears to be otherwise identical. 10155 Maersk Container Ship

costs $120 (compare to the original at $75 seven years ago) and is available from the LEGO Shop online now.