I’ve recently started being interested in the idea of collaborative LEGO builds. Everyone does their part and they all come together to create an amazing piece of art. Such is the case with The Village of Thornefeld a terrific medieval village collaboration from Cole Blood, Timothy Shortell, Grant Davis, Eli Willsea, James Libby and Jake Hansen.

I had the pleasure of seeing this model in person at Bricks Cascade. Photographs can never quite capture the grandness of these large creations, but it was joy to see up close. What’s incredible about this build, besides it’s huge size and masterful execution, is the cohesiveness of the whole thing. Each builder worked within a tight color scheme and used matching rock styles to make all the sections mesh seamlessly. I love the way the ground slopes slowly upward, creating a wonderful rolling landscape and various levels. This is great territory for storytelling which each builder does nicely, creating a bustling village that’s full of life. 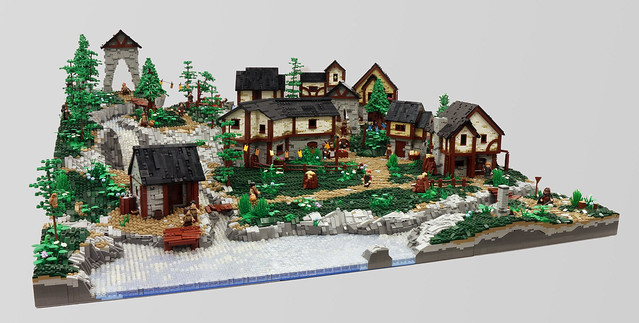 Either I was more exposed to post-apocalyptic LEGO creations or they were actually more common back when I joined the LEGO community nearly a decade ago, but this theme always brings back memories of immersive scenes filled with danger and adventure. Zombies, bunkers, bullet holes and toxic waste — what else does one need? The seemingly simple theme actually hides limitless potential — if the whole world went down, there are a lot of locations to build, and James Libby chose to show us a desert. 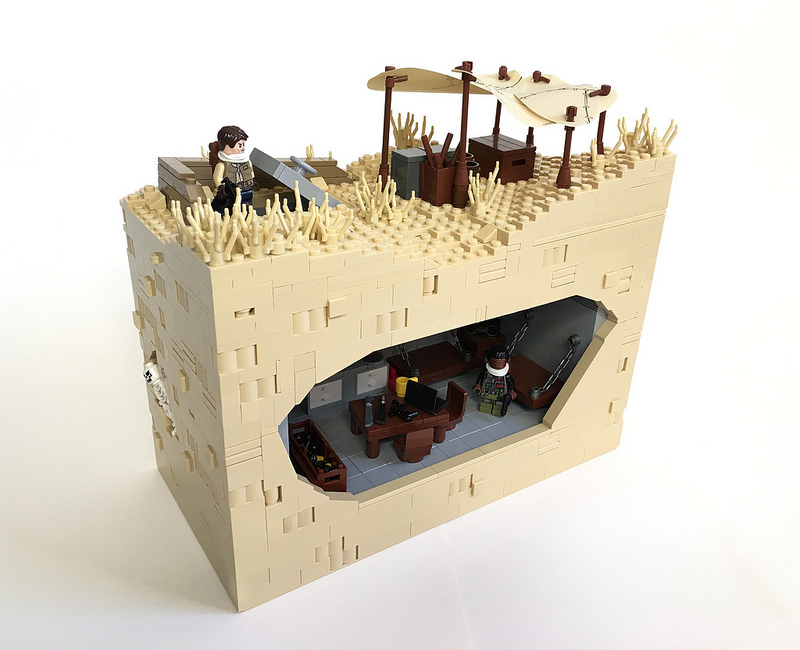 The main feature of the scene is the cutout showing an underground survival bunker including some utilitarian furniture, and of course weapons. The top has some nice details too, the best and the most subtle one being the little wall around the trap door, which has just the slightest tilt to it. What I like the most though is the tan border. The texture adds depth, while the stylish cutout and the skeleton “buried” in the sand create an atmosphere reminiscent of a comic panel.