I'm a young AFOL (Adult Fan of LEGO) with a passion for historical and castle themed LEGO creations. Not convinced? Have a look at my Flickr Stream. 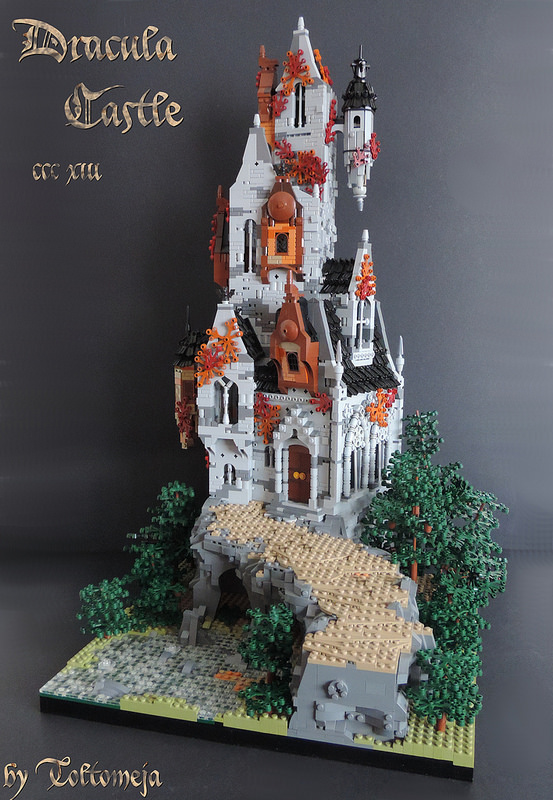 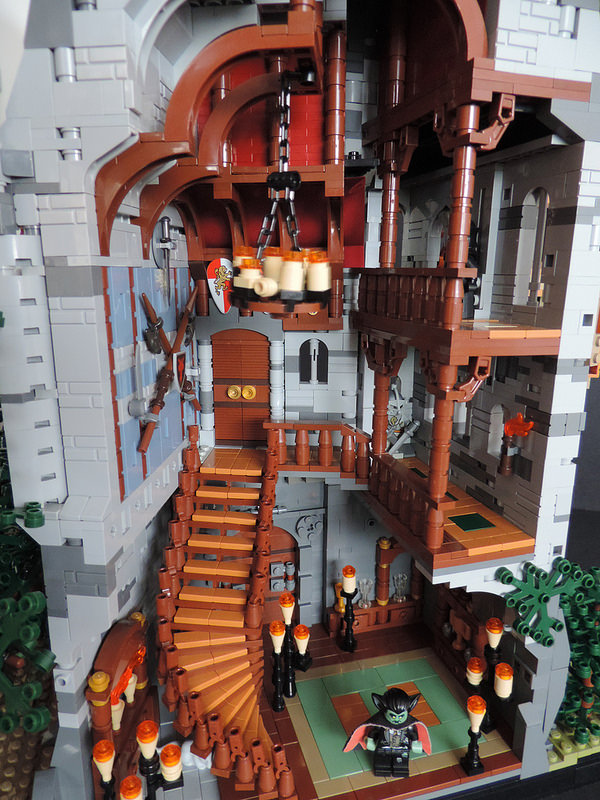 Droneuary is almost over and that means the special building month for all things drone is almost over too. There have been a myriad of stellar creations in this year’s challenge, but here are a few of my favorites:

The first is Olympus Mons from TBB’s own Simon Liu. 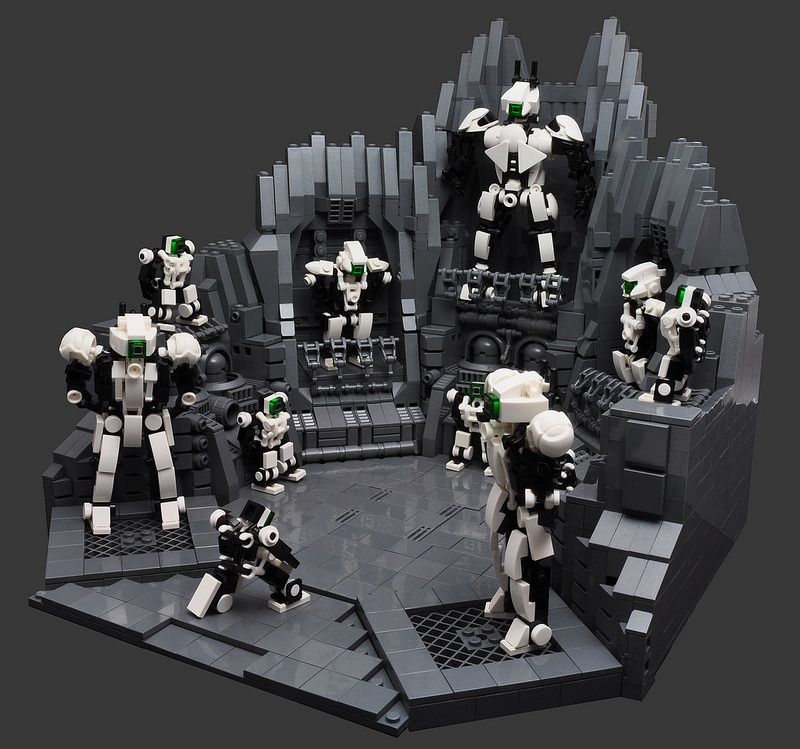 I just love the dramatic monochromatic feel this build exudes. It’s also interesting to note the religious undercurrent that Droneuary is known for. In this case the scene features Zeus instead of the usual “Dronezus”.

Next we have Markus Rollbühler and his trio of uniquely-colored Drones. 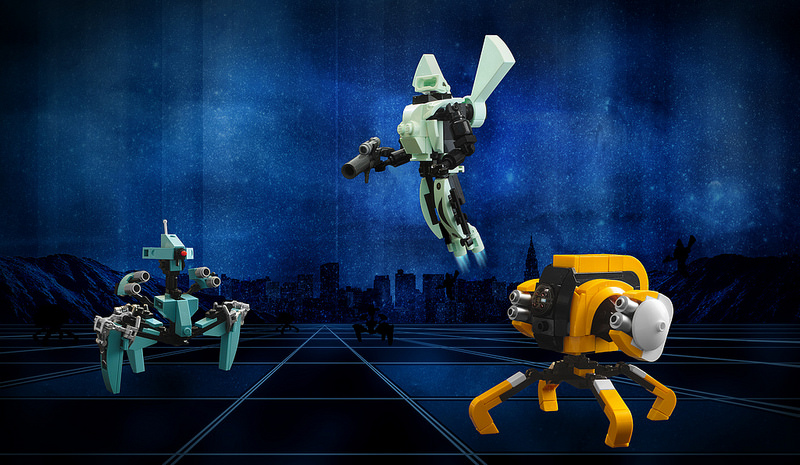 There’s nothing like some rare and hard-to-find colors to get out of the comfort zone, but Markus makes it look surprisingly easy to build in dark turquoise, light aqua and bright light orange.

Finally we have the perennial Tyler Clites and his U.N. vs. Spetsnaz Drones. 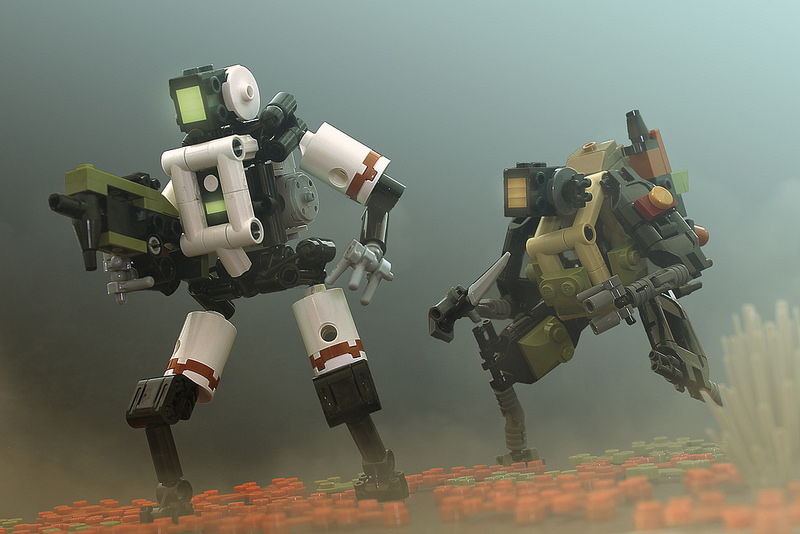 The cold war didn’t end. Or did it? Tyler utilizes his mastery of character and figure posing here to full effect. You can almost feel the mist as the Russian drone sneaks up on his target.

Ever since Tyler and Nannan built their masterful floating island collaboration called Aurora, other builders have taken up this beautiful and unique genre both individually and in groups. One of the regulars in the new unexplored theme is Brother Steven. His latest build is a sight to behold! 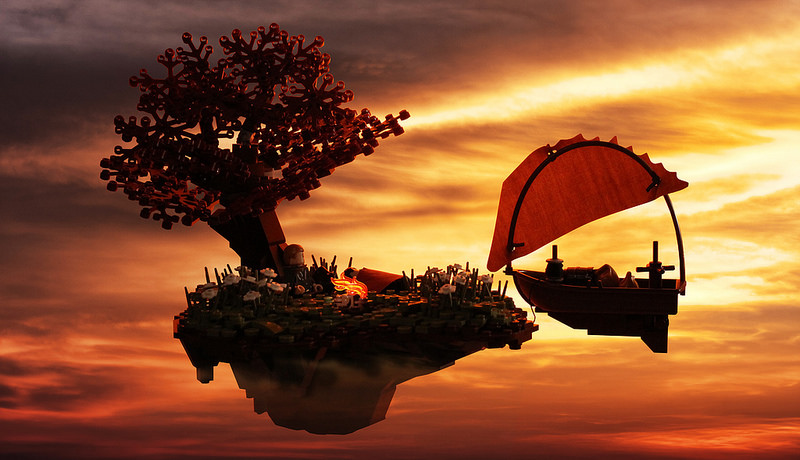 Built as part of the Isles of Aura, the combination of a quaint well-balanced creation and an excellent edit job makes this quite a stunning picture. I hope we see more floating islands in future!

While browsing through Flickr today, I stumbled on this hilarious scene created by Brick Police. I’ve seen several photos of his highly detailed and customized police figures in various situations before, but this really takes the cake! 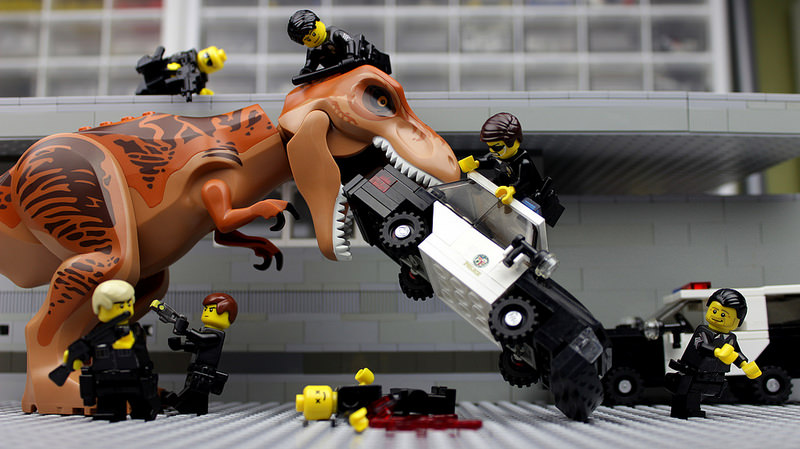 I must admit it cheers me up to see the good ol’ T-rex having a brawl with the LAPD. I hope we get to see more fun uses of the LEGO Jurassic World dinosaurs outside their cages!

And I thought we had already seen all the cool ships from last year… Turns out TBB favorite Tyler Clites has just posted his fabulous contribution to SHIPtember, last year’s month-long spaceship building challenge. 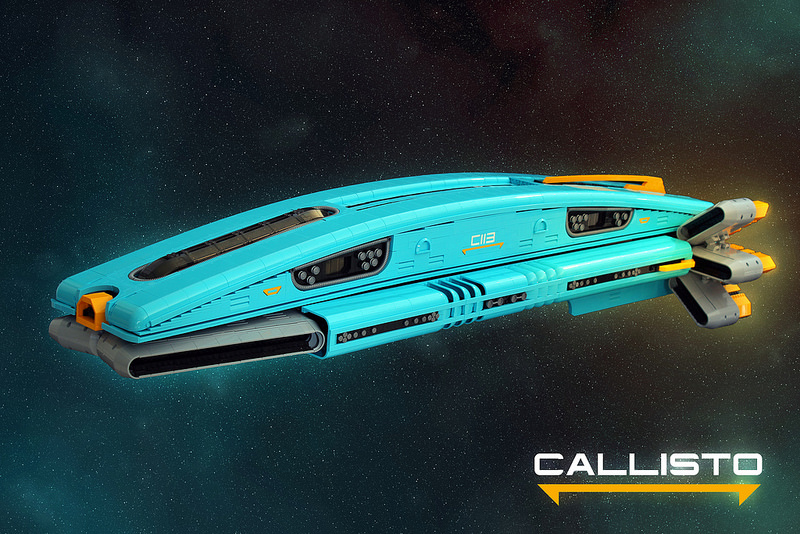 The builder says it took longer than a month to complete (not exactly ideal as it is only a month-long ordeal). But I think we can cut Tyler some slack with this one. Those curves are fantastic. The color choice is superb. Undoubtedly one of the most stunning spaceships I’ve ever seen!

I was a big fan of the first Ice Age movie when it came out several years ago. My favorite character was this prehistoric squirrel-thing that was constantly causing tectonic plate shifts with his prized acorn. The crazy proportions of “Scrat” would make it seem like an impossibility to recreate him effectively in LEGO (though Bruce Lowell built a LEGO Scrat a few years ago). But captainsmog seems to have captured the frenzied and furry essence flawlessly. Yet another epic use of the Mixel eyes! 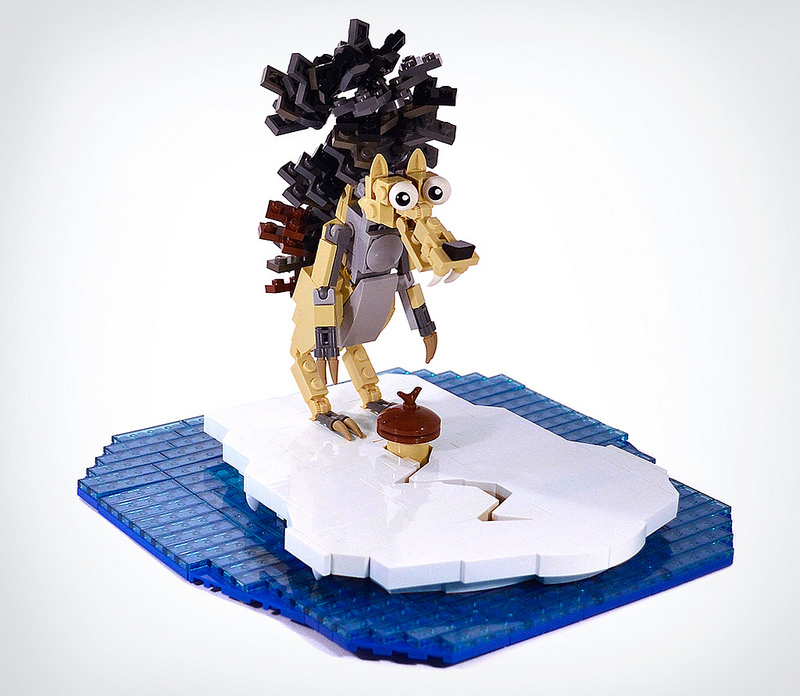 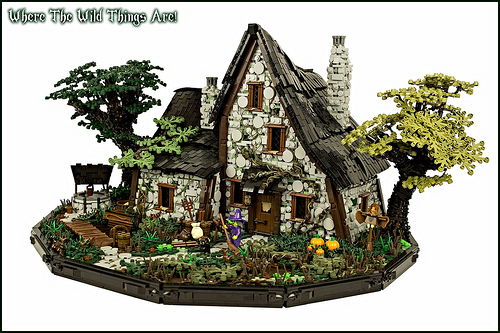 END_OF_DOCUMENT_TOKEN_TO_BE_REPLACED

Sometimes it’s scary and/or heart-wrenching going into a new year and another big step in time. And then sometimes we’re just thrilled to be done with it and move on. Chris maddison recently shared one rather hilarious perspective on the new year. I’ve got to admit, I laughed way too hard at these delightfully detailed numbers. Happy new year! 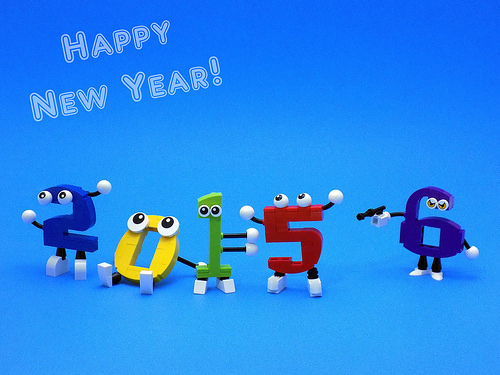 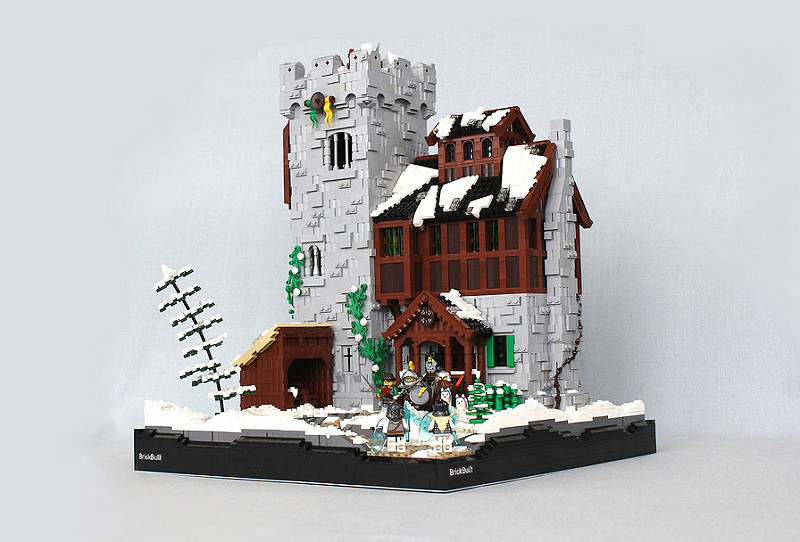 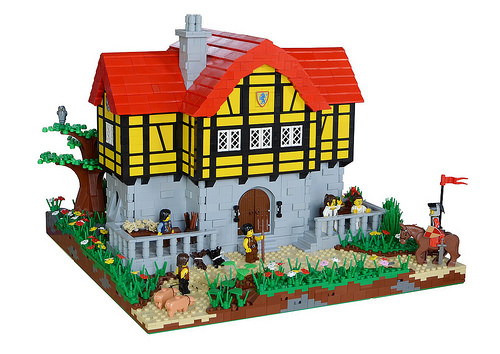 It’s nice to see a middle eastern creation pop up in the Flickr feed now and then. Like many other genres, I think this theme in general has a lot of creative potential yet to be explored. So when an up-and-coming castle enthusiast like Joseph Z gives eastern-style architecture a go, it’s rather exciting to see! 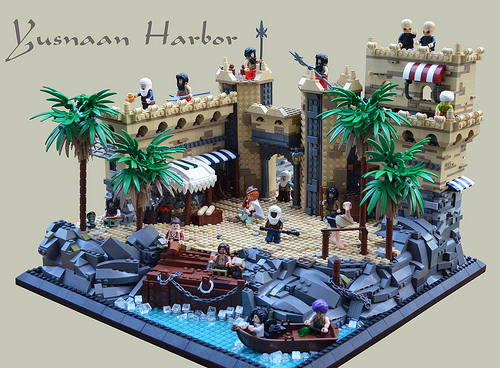 The studs-outs wall texture and the nifty palm trees are certainly worth noting. But I think the unique use of minifigs make this stand-out most to me. I see what looks like a victorian lady carrying her longsword across town, and even those alien musicians from Star Wars. The builder gives us a brief description about the locale but I want to know more about this cool and wacky place!

LEGO mosaics are fascinating. I’ve never tried to build one but I would imagine it would be very difficult. Jimmy Clinch, however, seems to have had no trouble assembling this masterpiece. 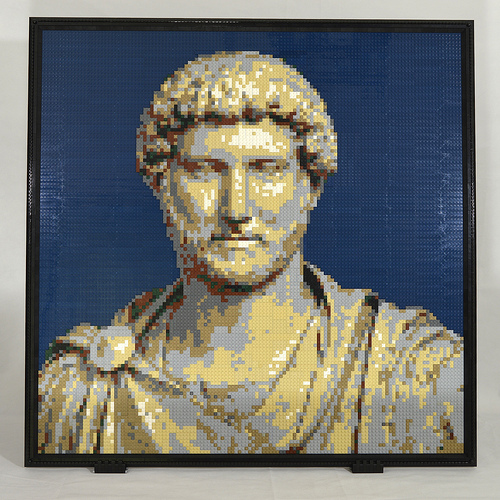 The brilliant use of tan, dark tan, light grey, dark grey and even some dark green give this two-dimensional creation an amazing three-dimensional look. It’s as if you could reach out and “beep” emperor Hadrian on the nose!

The builder says that this was built to accompany the Brick to the Past group’s Roman frontier collaboration we featured a while back. Be sure to check that out if you haven’t already.

One interesting thing about the LEGO castle theme is that the characters and factions always seem to be at odds with one another; fortifications and weapons come as second nature to the minifigs of the darker ages. So it quite refreshing to see this diorama from durazno_33, which features a whole bunch of castle minifigs from different factions getting together and celebrating without their swords drawn! 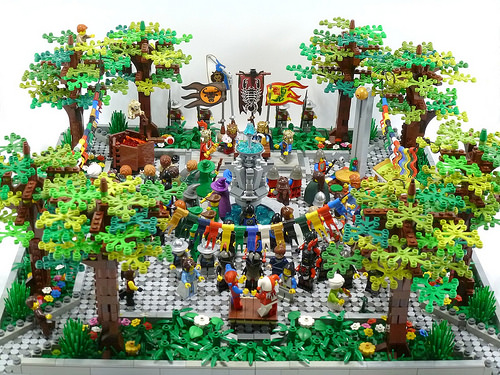 Clearly, this is no ordinary stuffy political treaty signing. It seems like an entire festival has sprung from this single event. 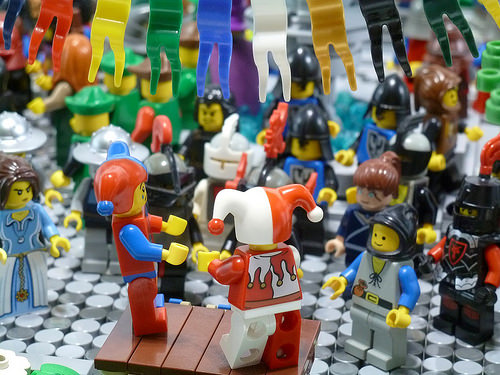 I really like how there are minifigs from almost every year and theme LEGO has created for their long-running castle set lines. Plus, those altBricks leaves give the scene a lively look that would certainly be lacking otherwise. Be sure to check out all the pictures in the builder’s Flickr album.