Welcome to Day 10 of our LEGO Advent Calendar countdown. Each day, we’ll reveal the four mini-builds from the LEGO Harry Potter, LEGO Star Wars, LEGO Friends, and LEGO City 2019 advent calendars along with commentary from The Brothers Brick team. 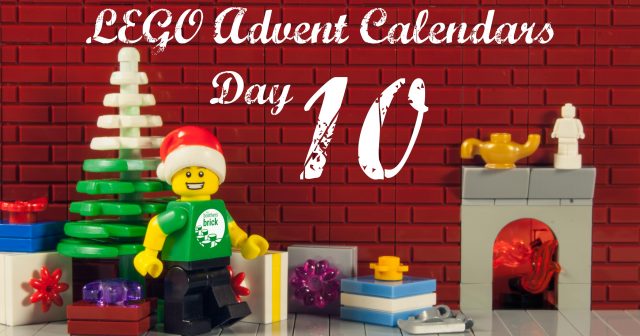 If you’re opening one (or more) of these advent calendars along with us, we’ve made sure the pictures and commentary on each day’s models will be behind a jump so we don’t accidentally ruin the surprise. What will we open for Day 10?

For Day 10, we have Ron Weasley from Harry Potter and a Quadjumper from Star Wars. 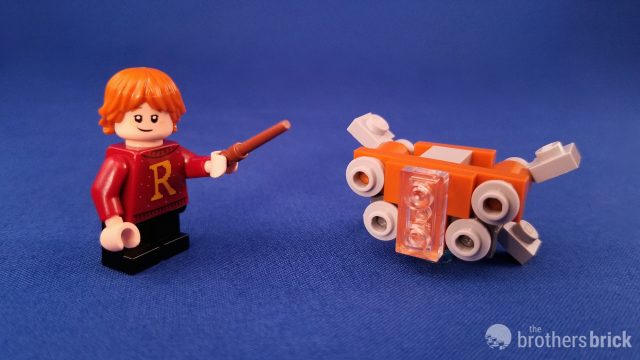 Dave: Ron’s sweater made by his mom is the perfect pair to Harry’s from day one. It is also the second exclusive minifig print in the Harry Potter advent this year, making it the standout calendar of the year so far. The Star Wars Quadjumper looks a bit clunky, but I admire that the ship can be reduced down to 20 parts and still be recognizable. (It looks like a mini version of 75178 we reviewed two years ago.) I do love the excess of Apollo studs though!

Alexander: What did you do to Ford Anglia, Ron?!

Lino: “Yeah, but I had more screen time so there!”

Benjamin: That must be a Weasley vehicle. It’s ginger, too!

Andrew: I’m afraid to tell you Ron that you’ll never get it off the ground.

Matt: What kind of bug is that?

Edwinder: I’m so proud I can identify that Jakku Quadjumper that appeared for less than 3 seconds in The Force Awakens. Looks like they’re running out of ideas again. But props to the designer.. this one made the cut for me.

Continuing with Day 10, we have a pair of stocking ornaments from Friends and woman with a camera from City. 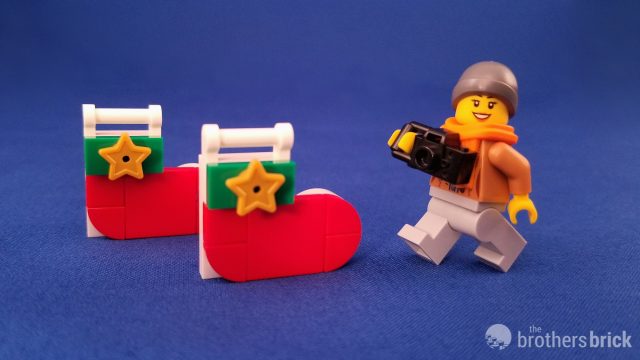 Dave: Pairs of things seem to be the theme of this year’s LEGO advents… two trees… two penguins… and now two stockings! (Well, they seem more like plain socks.) The curved corner tiles are really put to good use getting the profile right. For City, I love the scarf. I’m excited it will be available in red next year in the Chinese Spring Festival sets and lime green in the new Bookstore modular.

Alexander: Builds of larger scale from the Friends calendar make me want a generic Creator Advent calendar set. I love this socks!

Lino: “I can’t wait to see the look on their faces when they see stockings full of cole slaw!”

Benjamin: The socks are so oddly proportioned, though. Who ever heard of ankle stockings?

Chris: I’m with Benjamin on this one, they’re like ankle socks made into stockings. It’s just wrong.

Matt: I went to LEGO this Christmas, and all I got were these starchy stockings.

Dave: Wait a sec, Edwinder… socks have a right and a left one!? I’ve been wearing mine interchangeably my whole life! What have I done!? 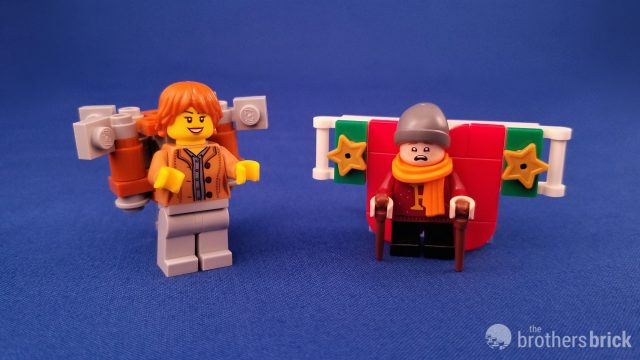 Dave: I love Ron’s alternate expression… It is just so… Ron! He looks great in the scarf too. Though is that a glider or a holiday jet-pack?

Lino: “It’ll all make more sense once we get to the gumdrop forest.”

Daniel: That one is garbage… (crash, boom)… The garbage will do.

Chris: Well, The Rocketeer was a Disney film…

Edwinder: “Trust me little one, it’s safe, I’ve done this countless of times before”
“But, what are these wand sticks for, it ain’t gonna in any way when I’m up in the air?
“Oh, you’ll need them to fend off the pesky birds that fly right into you”
“Riiiighhhttt”