So I have been building again. This one was quite a stress-free build, inspired by my other recent dragon, Dragon Unit LL-32167. I was struck by a moment of inspiration about a month ago and realized that I have a yellow 24-toothed gear that would work perfectly in the dragon’s neck. The thought process continued with the idea that if I build a dragon using no light gray and (almost) no blue, I could keep the previous one assembled for a longer time. This means that everyone visiting my tiny local LEGO shows/conventions may have a chance at seeing the two mecha dragons side-by-side. I name this awesome construction worker mecha dragon Workhorse. 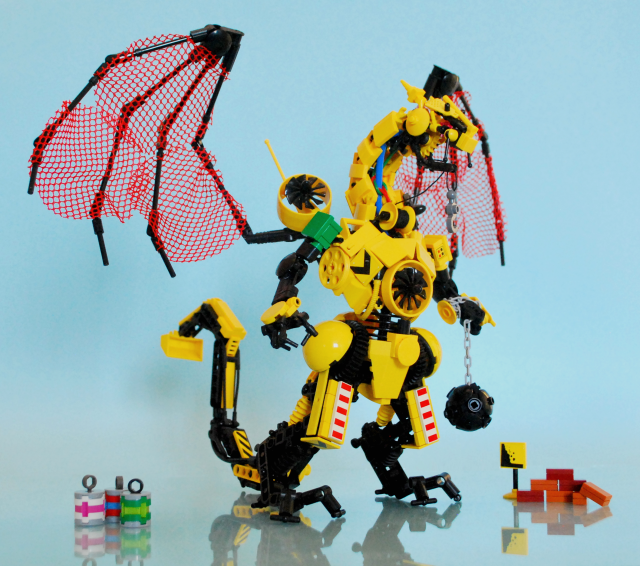 Speaking of side-by-side, I guess it makes sense to compare the two dragons. They could be called “sister models”, as LL-32167 served as the primary inspiration not only thematically, but also quite technically. Note the (less visible, black) leg assembly follows the same pattern of using multiple worm gears as shock absorbers. The head construction is quite similar. (I would say the LL-32167 build was simpler and possibly better, but this one has a FREAKING CRANE HOOK COMING OUT OF ITS MOUTH.) The main difference is the torso, which is not quite as sturdy as my older mecha dragon. This makes the wing and leg connections weaker, but more poseable and possibly less awkward. I could have used this to my advantage to create an asymetric pose. But I did not. The wings are a simple build in Workhorse (the build of this article), but I think a construction yard fence used as wings is exactly what a robot worker dragon’s wings should be. There are more differences and similarities between the two of course, but I will let you explore them on your own. The major difference is the concept. I think Workhorse is quite a unique idea and that is its main quality. 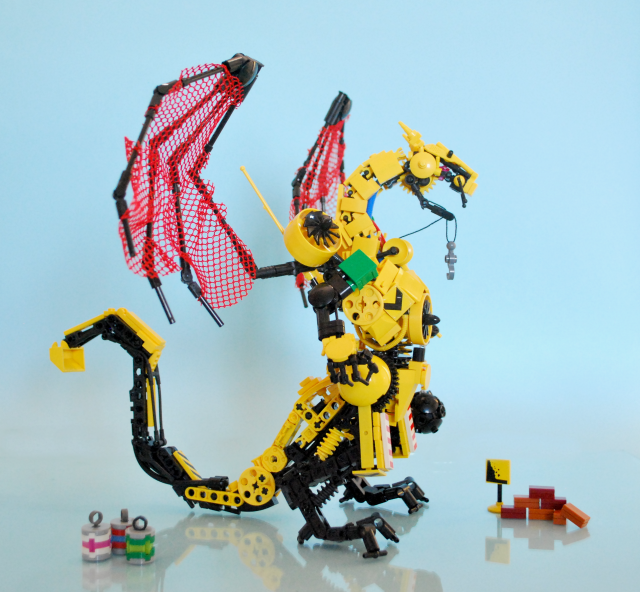 I guess we can move on to Workhorse as a standalone build. I do not often buy individual parts on Bricklink with a particular creation in mind, but the red 10×10 nets were totally worth it. They are just much smaller than I imagined, and I bought only six. That is why the wings are kind of small. Despite their low weight, they were hard to stabilize and I had to use some ball joints to hold them up. This change of plans (from simple clip-bar connections) made the back a bit more complicated than I would want, as well as less stable and uglier. The part which I am most satisfied with is the tail. I admit I have no idea what an excavator arm looks like, but it kind of resembles this tail, I think. I am also very pleased with the arms (that wrecking ball is a variation on an old sphere technique) and the upper legs, notably the boxy armour over the knees. The green shoulder was quite necessary to break up the monotony. I have tried using printed tiles in its place, both in yellow and white, but the clean green solution turned out the best. This is my 25th LEGO dragon by my count (so ignoring a bad and possibly never uploaded Bionicle dragon). 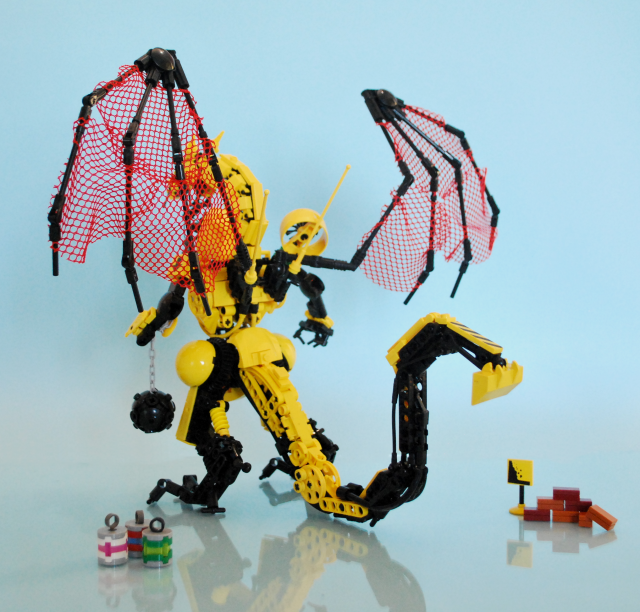 I will end the article with a few thoughts on photography. I hope the pictures turned out better, as I have borrowed a better camera for them, took them in diffuse sunlight and got some second opinions on the post-processing. I thought the little side decorations like crates (they can be picked up by the crane going from the dragon’s mouth!) and the bricks with a road sign that I admit makes absolutely no sense. The reflection was achieved with a glass aquarium cover that I probably cleaned more than I needed to, and the edge was blurred out with a new tool I discovered in Paint.net. 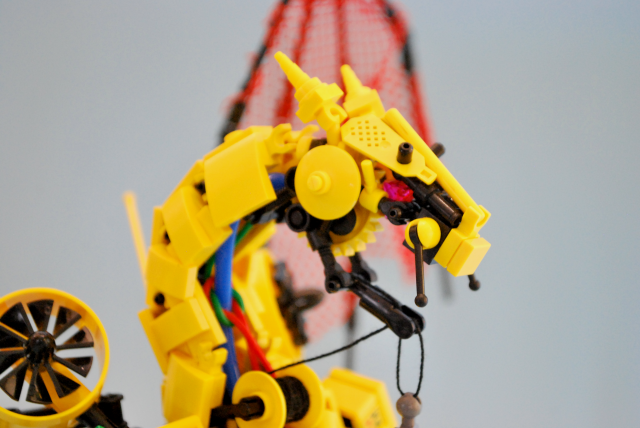 I hope you enjoyed my ridiculous and kind of cool creation. I think it is a unique idea, but if you find any previous examples of this pointlessly specific theme mashup, I would be very happy if you link it in the comments. You would be surprised how many Classic Space dragons LL-32167 brought to my attention!