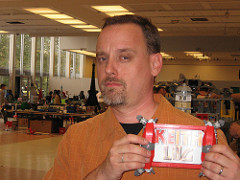 I’m extremely pleased to announce that Keith Goldman has joined The Brothers Brick as our resident Columnist.

Keith is one of those LEGO fans of near-mythical proportions. Having met Keith in person, I can report that he stands nine feet four inches tall (that’s twelve meters for you Canadians), and is able to levitate his entire LEGO collection with his mind. Despite his telekinetic abilities, Keith has four arms (six metric). To fit in better with mere mortals, Keith is able to change size and shape at will.

Here’s a photo of Keith (center) with his coterie of adherents, better known as KeithLUG — yes, the man has his own LEGO Users Group: 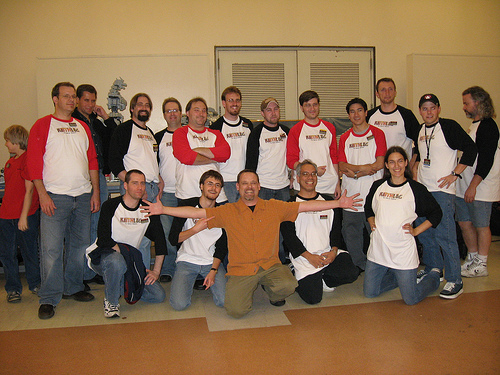 Keith is perhaps best known for his bloated dioramas, including The Omicron Weekend, built with one third of all LEGO bricks in the Western Hemisphere by a division from the US Army Corp of Engineers over the course of a six month period. Naturally, Keith directed the troops remotely with his mind.

Keith is also a LEGO Ambassador from 2008 until whenever he feels like it, bringing order to the LEGOverse (and MOCPages in particular).

As a Columnist for The Brothers Brick, Keith will apply his “oratorical tradition of uninhibited or unbridled commentary” to semi-regular editorials on LEGO-related topics. Hey may also deign to grace us with his own creations from time to time.

21 comments on “Wait. Who exactly let Keith in?”