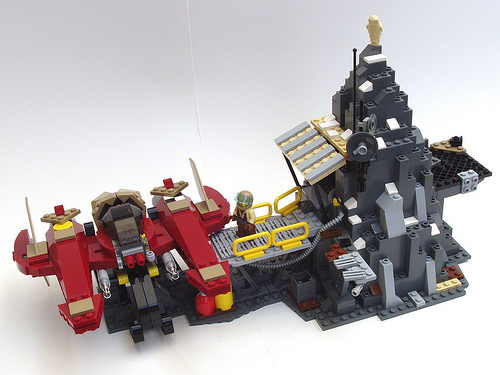 Rocks: check, base: check, launchpad: check, compact design: check, fun colours: check. After admiring his recent (and tiny) Fireball I asked Peter Morris to do me the honour of building something for my Dogfighters 2137 theme and he’s more than lived up to my expectations with the bDY-210 Drahken and its base.

As an added bonus Peter made an LDraw model of the Drahken which allowed me to begin a joint CGI image featuring the Drahken and my own Verdant Fern. Fun stuff and being able to share models across the world is just amazing. 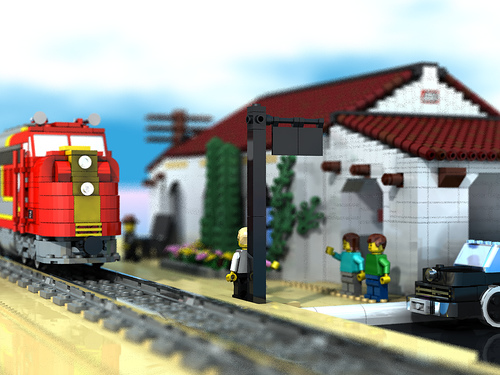 Matt Wagner (jedimasterwagner) is fast becoming one of my favourite LDrawers. As can be seen in this latest work he treats the rendering process as a means of creating artworks as well as for constructing models. I’d love to see the image he based this on for comparison. One of my side-interests (originally my main interest) in LEGO is CAD or virtual building using the LDraw system first created by the late James Jessiman. When you have a small collection of parts it is a great way to ‘build’ models that live up to your imagination rather than being limited to your supply. LDD provides one means of creating virtual LEGO models but if you take the time to learn it the older LDraw provides a much wider pallette of parts and more powerful tools than LDD. Best of all the two programs can share files with a bit of tweaking.

I realised today that many TBB readers may not be familiar with LDraw so I thought I’d take a brief moment to promote it. Most discussions takes place on LUGNET but to make things more accessible I created a Facebook group and Flickr group too. Hopefully I’ll see some fresh faces at one of these places. The LDraw website (and organisation) organise regular challenges and contests too so be sure to check them out.

NB. The image above is by Jan Folkersma and is the winner of the LDraw Scene of the Month contest from January 2007 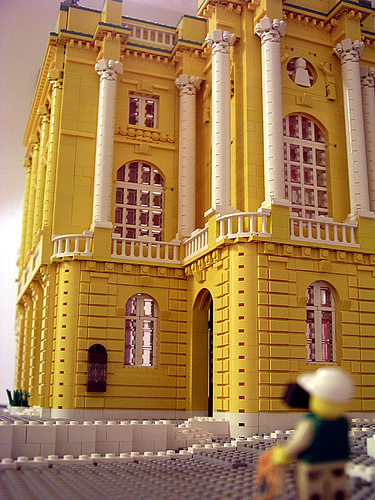 Matija Puzar announced back in September that he had completed his LDraw design for a LEGO version of the Croatian National Theater.

As impressive as the design may have been, the actual creation is just plain gorgeous. The capitals on the columns are particularly beautiful.

Thanks to Brick Town Talk for pointing me to the real thing. RACHAL (RAytracing CHALlenge) is a challenge we run on ldraw.org where various people render the same virtual LEGO creation (typically a vignette like scene). The point of it is to allow people to challenge themselves on rendering a shared LEGO scene adding their own technical and artistic interpretations. The first one has just finished and it’s really fascinating to see how various people approach the same source material. If you like it you may also like its predeccesor that I ran early last year called “Remix Lenin”.

Well first I’ll say a hello to Brothers Brick readers out there. I’ve been invited to cover trains and virtual LEGO creations (raytraced, rendered but definitely not real) for the blog. I’m very new to this whole blogging thing having started my own blog a bit over a week ago and you probably won’t get many words out of me usually but I’m pretty sure I know a good creation when I see one and I guess that’s what you’re here to see.

To copy-paste my profile on the Brothers Brick “I’m a builder with a short attention span and a lot of virtual bricks. I’m probably most known as a train builder and was involved in the creation of LEGO set 10183 (the Hobby Train Box) but I do a lot of other stuff too. I’m also a member of the LDraw SteerCo and a webmaster for the site.”

Anyway, on to the good stuff…

When I was just starting out building properly with LEGO (as opposed to the mucking around I did as a kid and young adult) the train builder who inspired me the most was James Mathis. I’ve since had the honour of working with James on a couple of projects as well as the Hobby Train Box. As well as being one of my favourite train builders James has the added advantage of allowing me to introduce both my areas of ‘research’: trains and virtual LEGO. 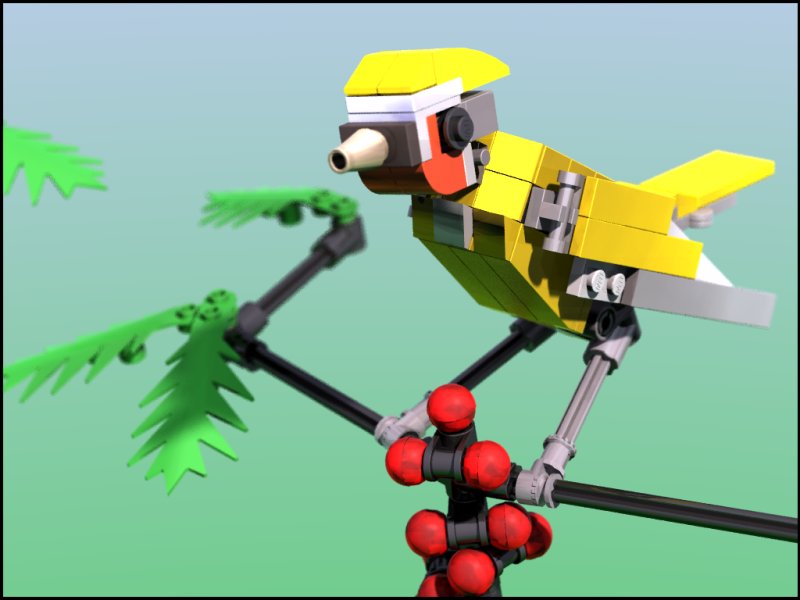 And to give you something brand spanking new (well almost) I’d also like to show off Andreas Weissenburg’s Bird.

And I think I’ll leave my inaugaral post at that. Hope it’s all worked OK.

No, sadly, as the title might mislead, it is not a question of LEGO re-releasing the, in its days quite fantastic, Blacktron line. However, the space community more than makes up for that by producing some fun original models! First out is Ed Diment’s nicely chunky Black-CAT, a transport of sorts:

With a lot of moving parts, nice shape and a well-executed colour scheme, this is definitely something I’d have enjoyed as a kid. But no worries, I’ll enjoy it now instead.

Next up is Andrew Verner’s (aka Andrusi) Legion. At first sight one would think it is a CAD version of the original Blacktron Invader: 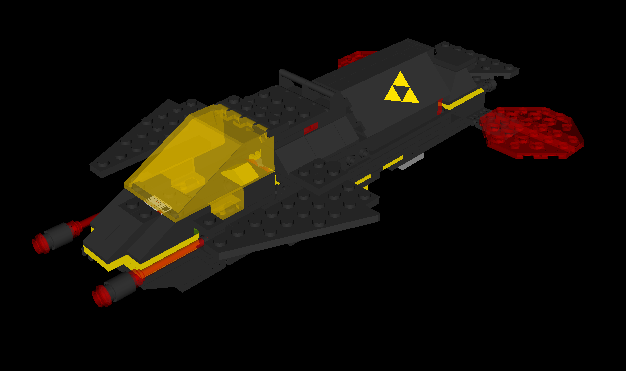 But lo and behold – he had us all fooled! With a few twists and turns it transforms into a robot! 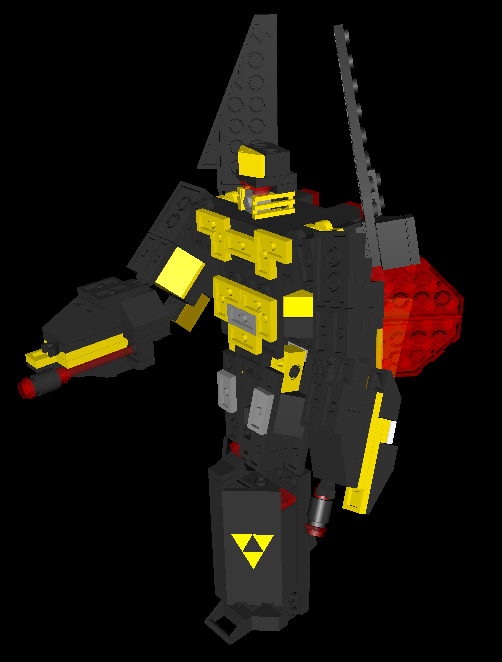 Andrew has gone to great lengths to ensure that the ship mode still is modular, and he even put a .mpd file in his gallery which means that those with ldraw can take a look at how it is built (and even build their own!). Thank you for that Andrew!

And with that we end this session of nostalgia.

Back in July I blogged Tim Gould’s LDraw version of a “Maschinen Krieger UDK38 Schenkel.” Now, Tim has posted pictures of his design in real bricks, complete with a nice diorama to showcase it: 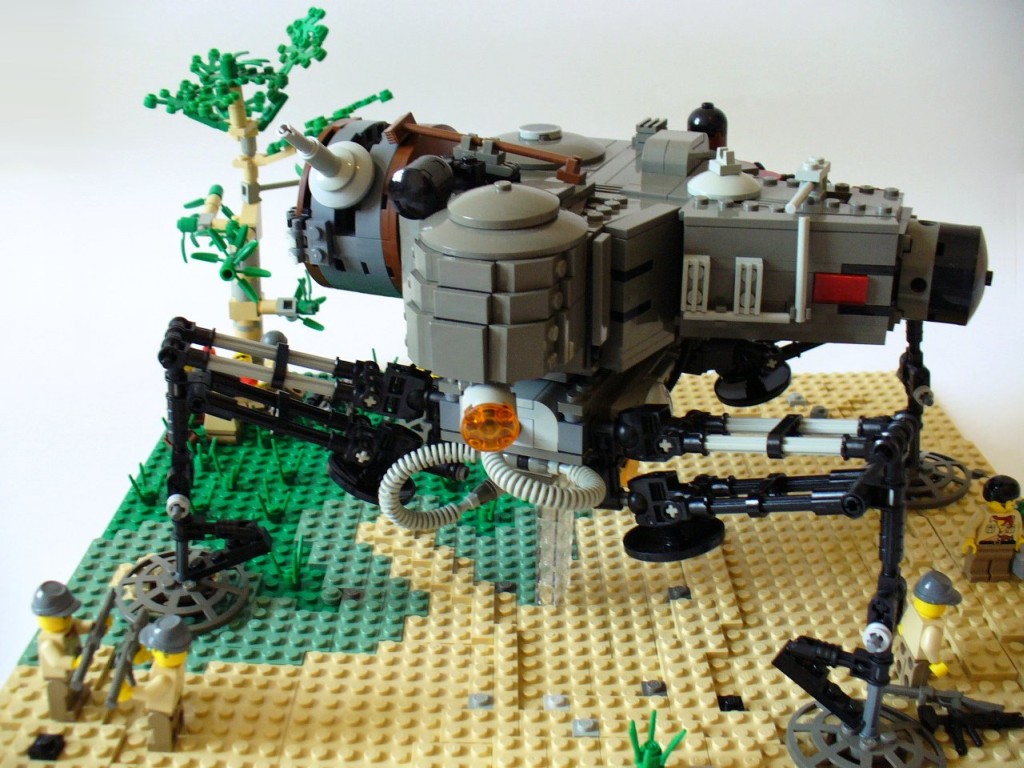 Here’s the (sadly) only decent picture of legoswami’s Hammerhead. It is a ship from an anime called Cowboy Bebob. I haven’t seen the anime myself (to be honest, I haven’t seen any anime), but this is a nice piece of work regardless. Too bad the arm is unable to move. 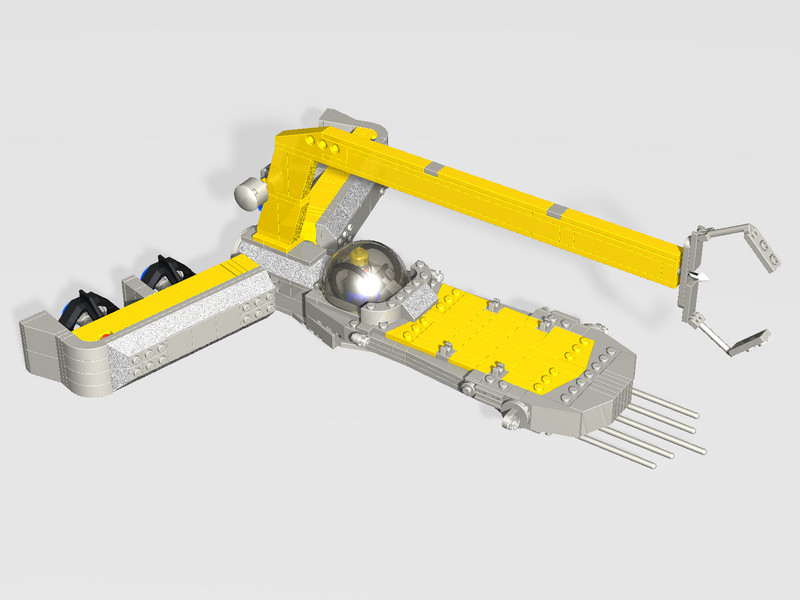 It is modeled in a family of lego cad-programs. If you want to know more (it is a great way to build without using bricks!), a good place to start is ldraw.org.

Virtual LEGO? Meh. While I understand that finessing the software can be a challenge, it seems a bit like cheating. (Unlimited parts? In any color you want? C’mon!) 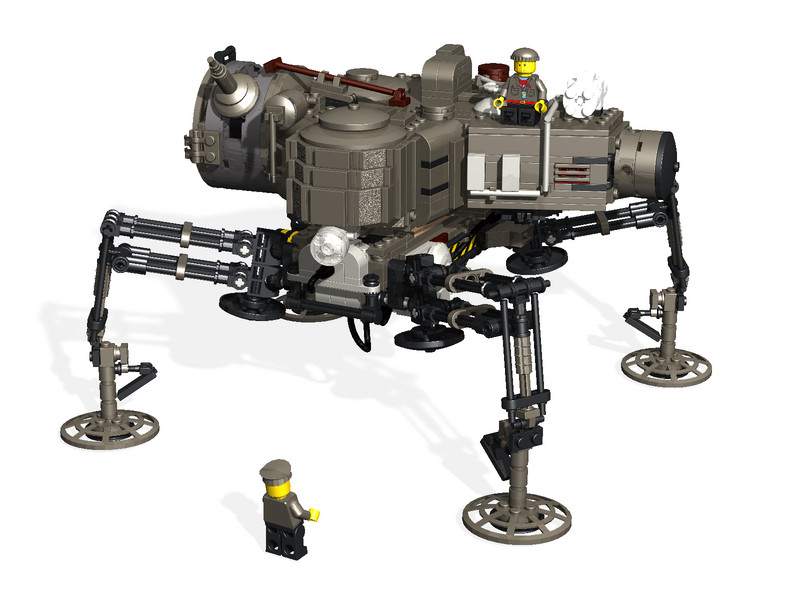