Sometimes you and your buddies see something nice that you want to build in LEGO. It could be anything, inspiration is all around us. I (Mansur “Waffles” Soeleman) have a close circle of fellow builders that we like to call “vehicle dudes” and “teal squadron.” Consisting of Caleb Ricks, Gubi, Thomas Jenkins, Pande (Malen Garek), Tim Goddard, Tom Loftus (Inthert) and more, we get on a group call on Friday evenings and build. During this time, we discuss things that happen in the world of LEGO, Star Wars, and everything in between. It is during one of these remote group build sessions that we discovered artist Spacegooose and their colourful starfighter drawings. 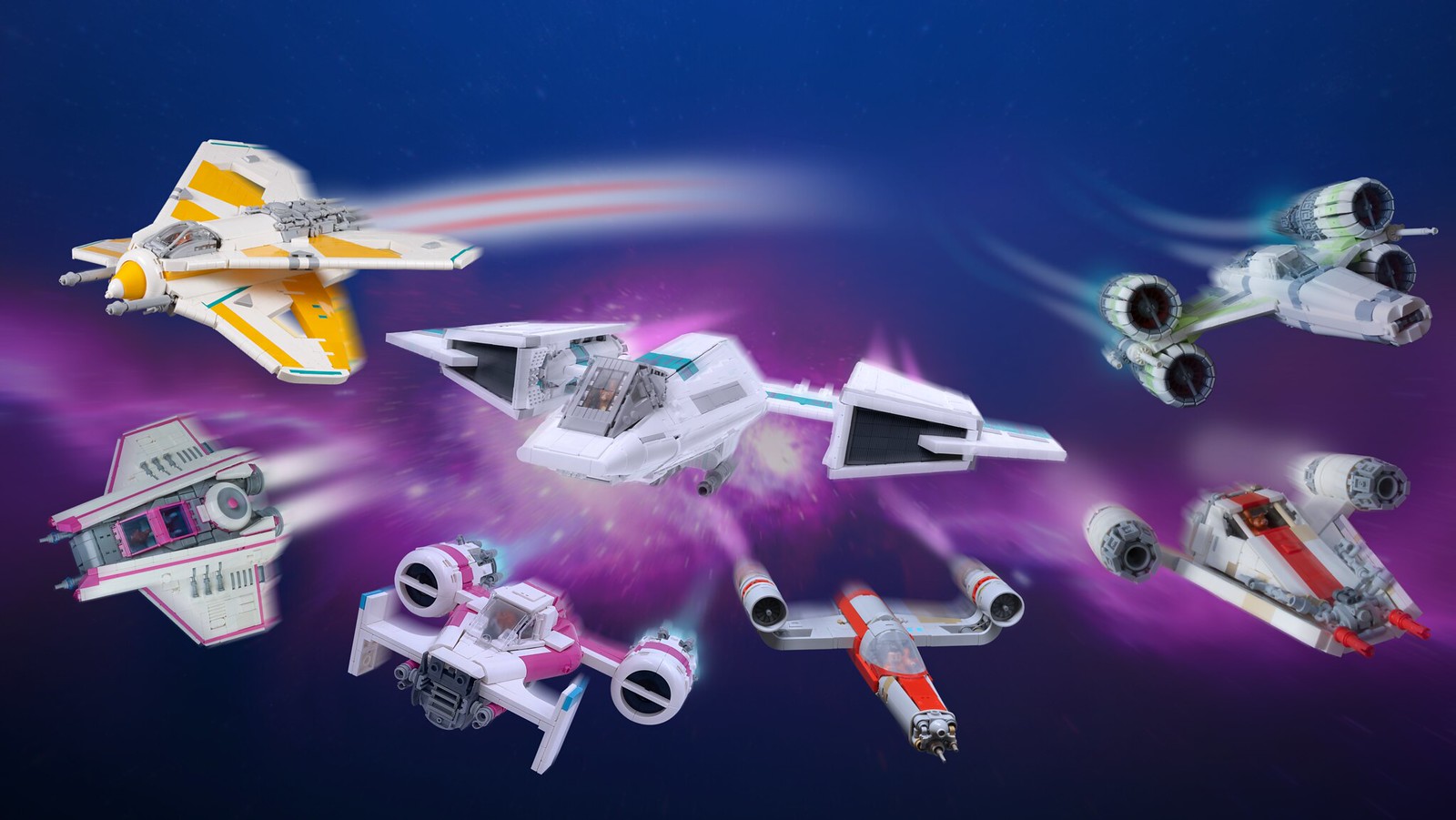 It was their similarity to Star Wars ships that drew us into building them. Their varying styles and functions have enough similarity to belong to one group, and so our builds became a small collaboration. With blessings from the artist who eagerly awaits their designs in LEGO form, we decided to include our own artistic spin as well as matching the original artwork.

Starting off with my own aptly named SpG-01 Calico, I had the idea kicking in my head for a long time. And by idea, I mean an engine technique using the new steering wheels introduced in last year’s Ghostbusters Ecto-1 LEGO set. I then saw this sleek craft with four big engines, and I knew I had to build it. Getting the build to match the smoothness and the angles was a challenge. I had to use my best knowledge of building techniques, all the while constantly rebuilding the internals to be stable and hold everything together. But the real challenge was getting hold of some rare yellowish green parts to complete the bright livery. 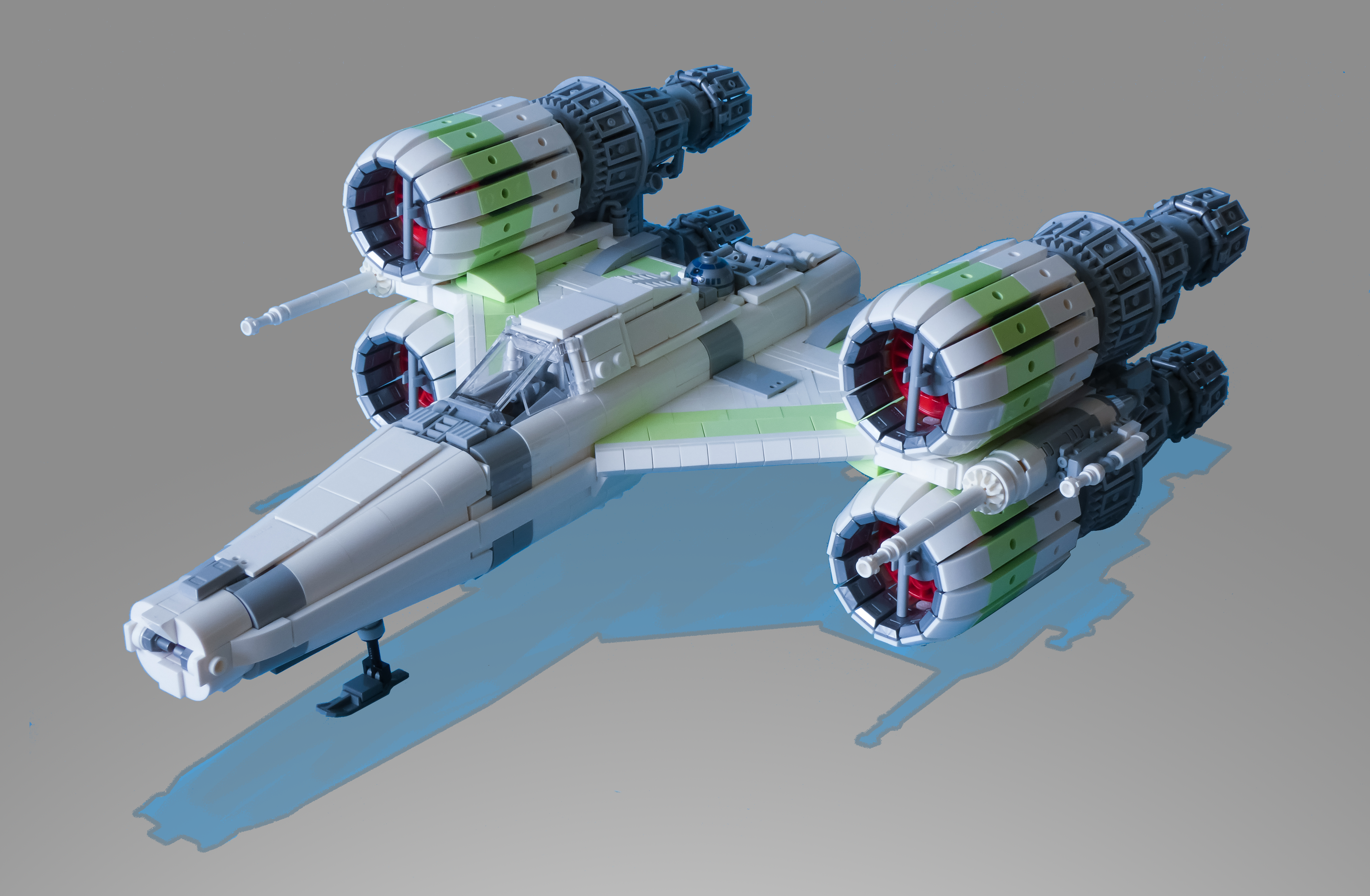 Tom Loftus (Inthert) chose the hardest ship to build in LEGO, but we had no doubt he would pull it off. The end result – the SpG-02 Air Drifter – is a tiny adventure craft for the leader of the pack. He actually decided to use the plastic windscreen from the Technic Ducati set before I built my A-wing utilising the same piece, so he was the first one to do it. 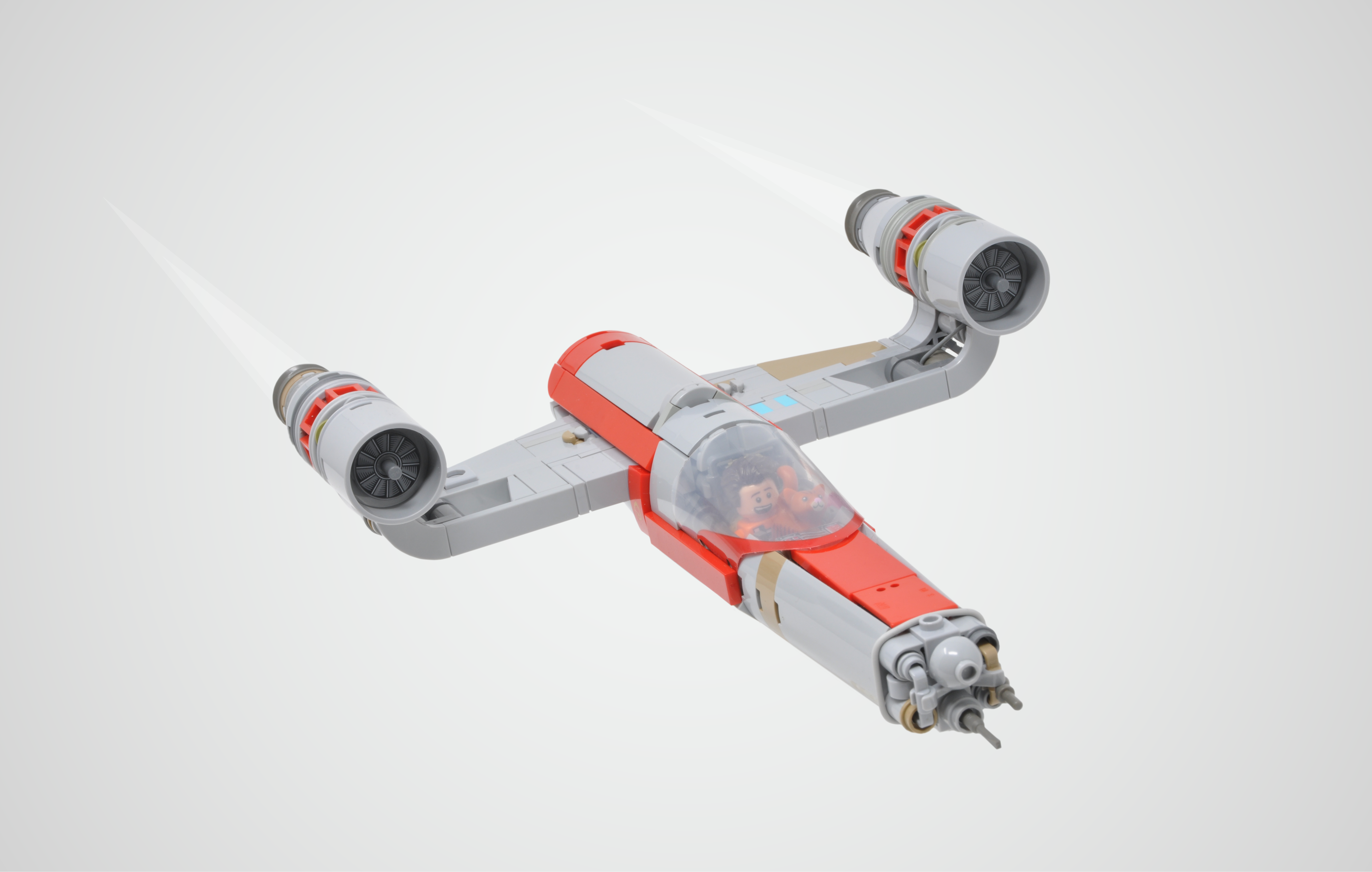 Tim Goddard decided to build an angular ship from one of Spacegooose’s many sketches before it became a full colour drawing. The SpG-03 Stray Scout channels space exploration vibes with ample room for three feline astronauts and a clean white colour scheme that only Tim can make look good. I particularly like his usage of odd bits from LEGO Clickits in the cannons and the round shield projector on the top. 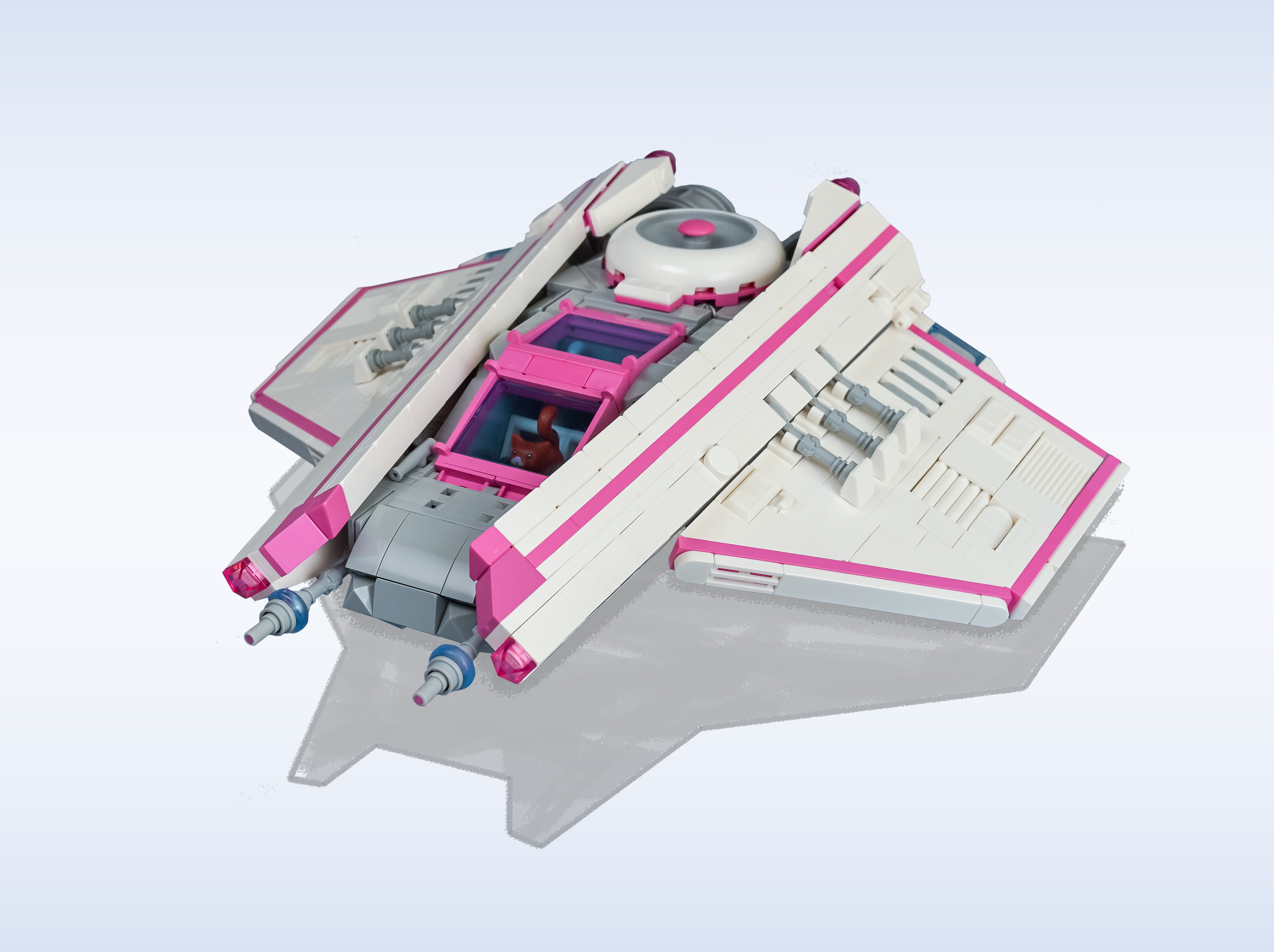 Caleb Ricks’s SpG-04 Flameseeker is a wonderful combination of shapes and colours which just boggles the mind. The way Caleb uses the geometries of LEGO pieces to create intricate designs of parts on smooth wings is a feat of engineering. The flame yellowish orange colour pops and really brings home the resemblance to a moth that inspired the original concept art. 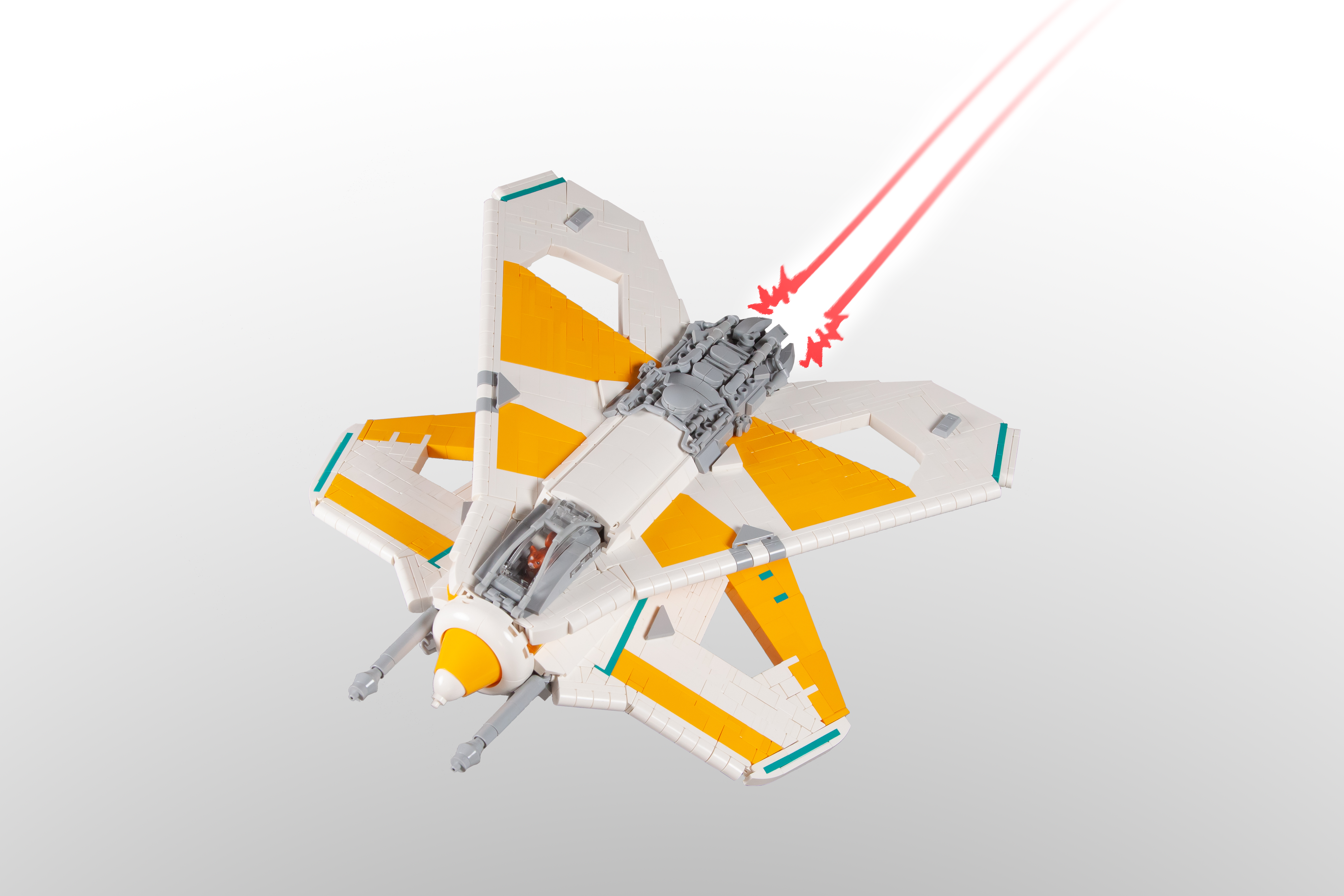 Hepcat is an old-fashioned slang for “someone keeping up with the newest trends in pop culture.” That name is fitting for Thomas Jenkins’ SpG-05 Hepcat since it utilises new LEGO elements and techniques while somewhat resembling an old Ford pickup truck from the 1940s and 50s with its smooth curves, big grille, and striking pink colour scheme. The best details are in the rear, the way the cockpit tapers back, and how each engine splits off into six thruster nozzles. 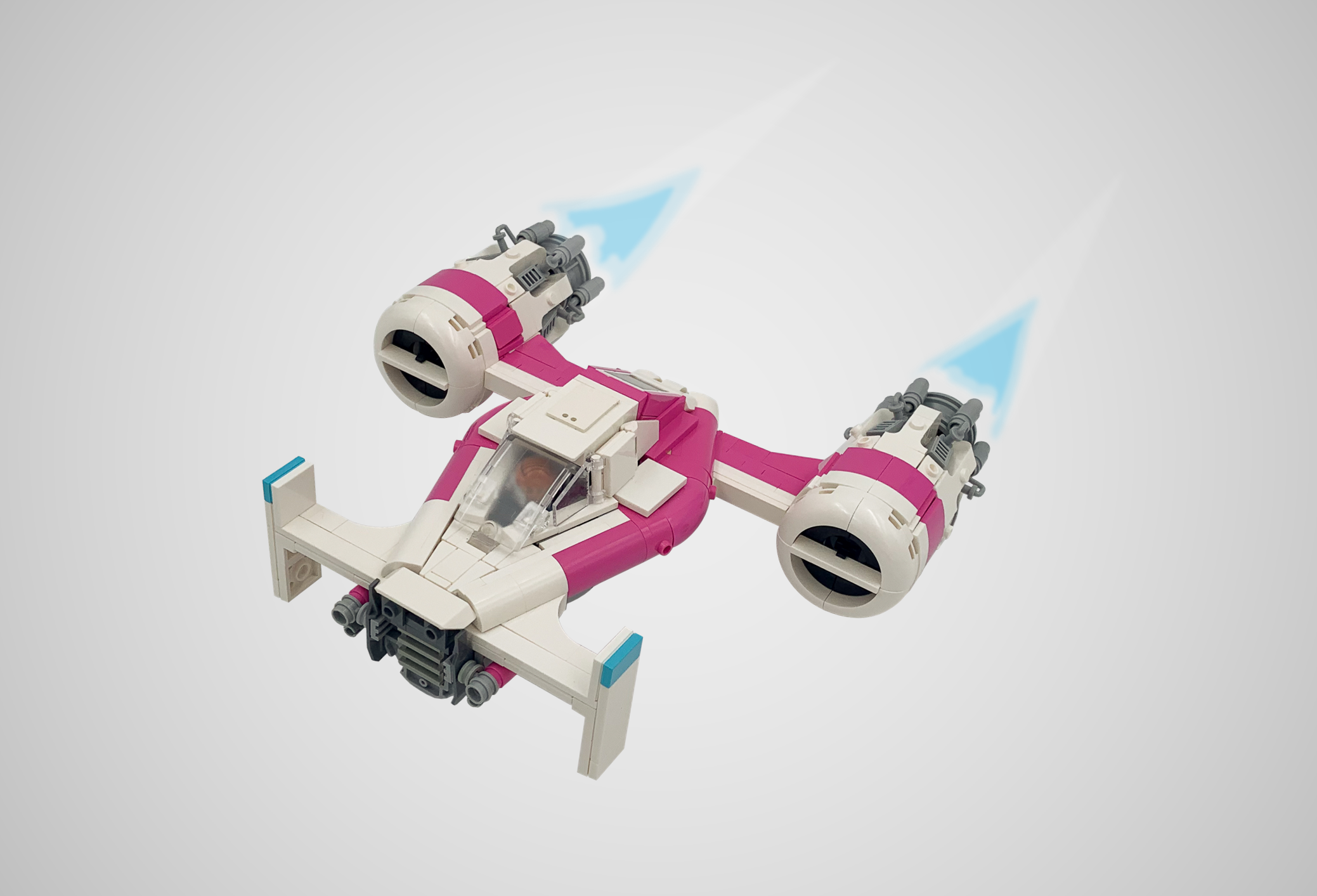 Gubi’s SpG-06 Albatross is a massive mother-goose ship with a striking white and teal livery. He also went all out in the angles and curves in a seemingly simple ship, yet to get the details right he had to up the size. Nevertheless, it works very well as it creates a variety in the Spacegooose fleet. 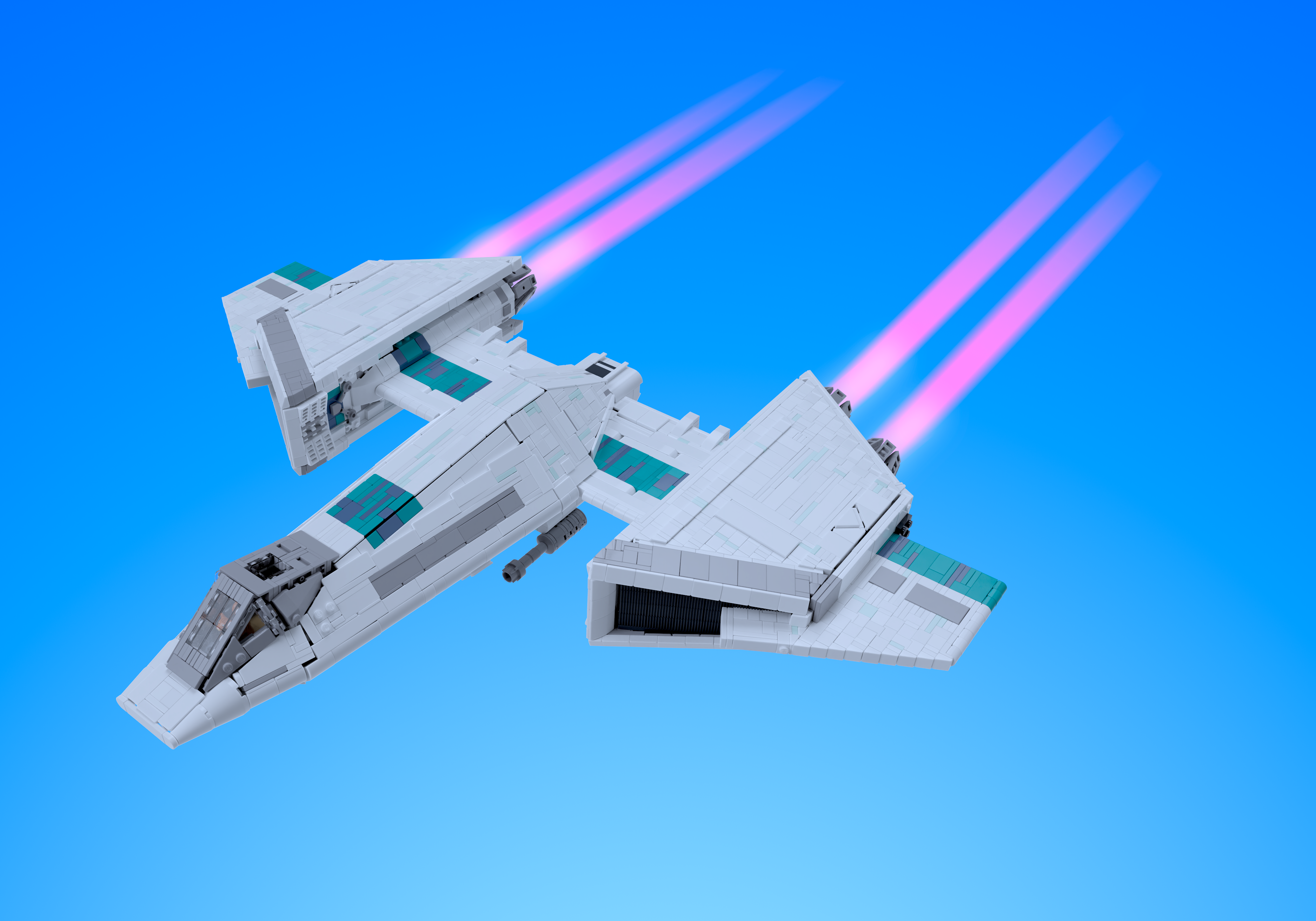 Finally, Pande’s SpG-07 Dust Skipper is fresh off the assembly line. In fact, his build is a last minute addition to the Spacegooose fleet. He combines smooth hulls with weathered greebles as his smalls ship is more suited to planetary racing rather than outer space voyages. 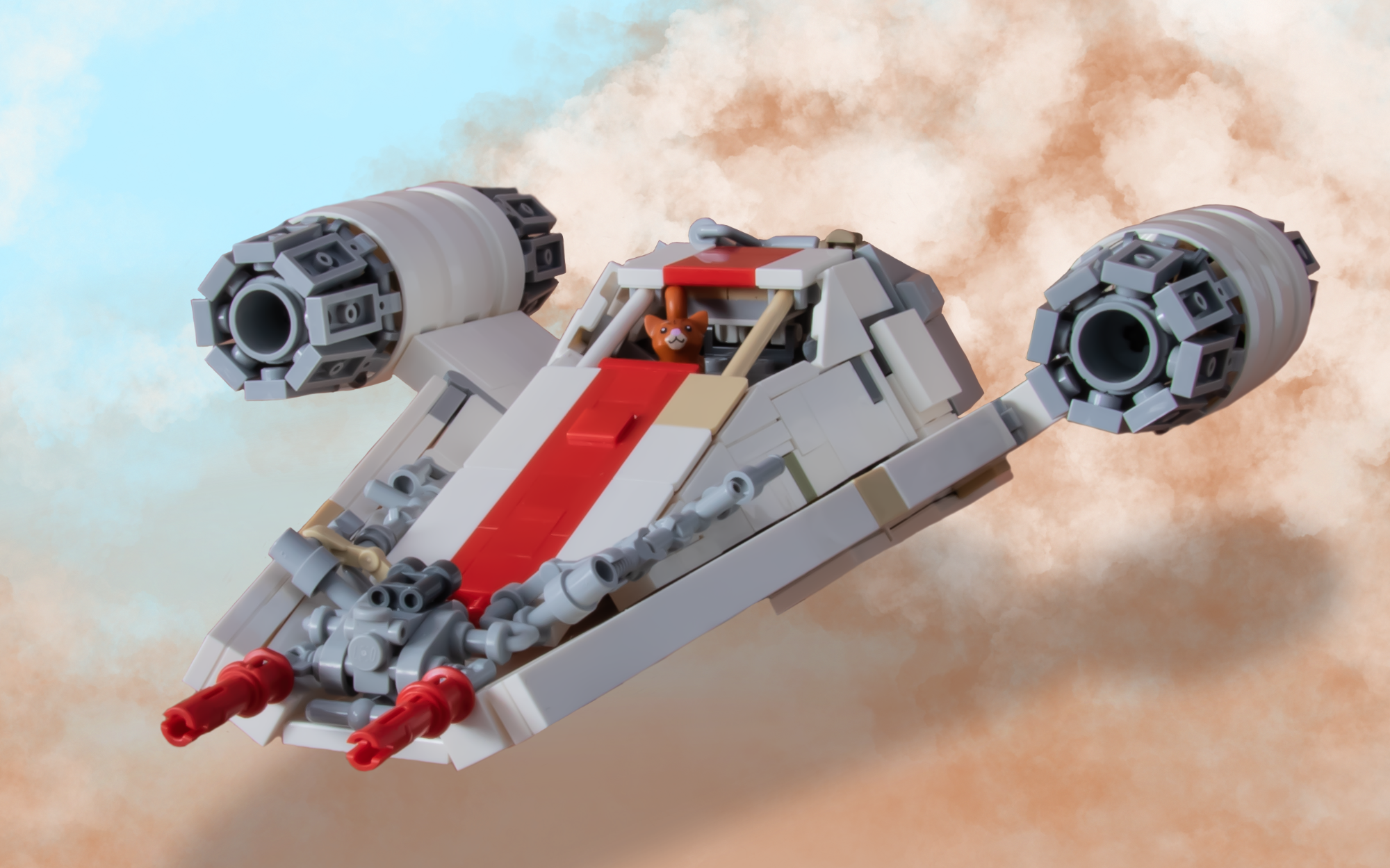 2 comments on “Cat squadron, standing by!”