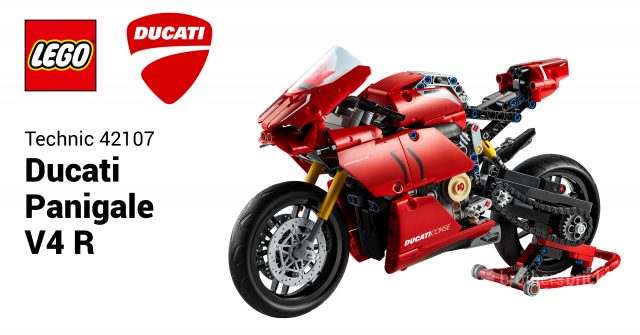 Inspired by the iconic Ducati superbike, the LEGO version of the Panigale V4 R features realistic steering and both front and rear disc brakes. The model also includes details that mirror its real-life counterpart including the shaped kickstand, exhaust pipe, windshield and dashboard. 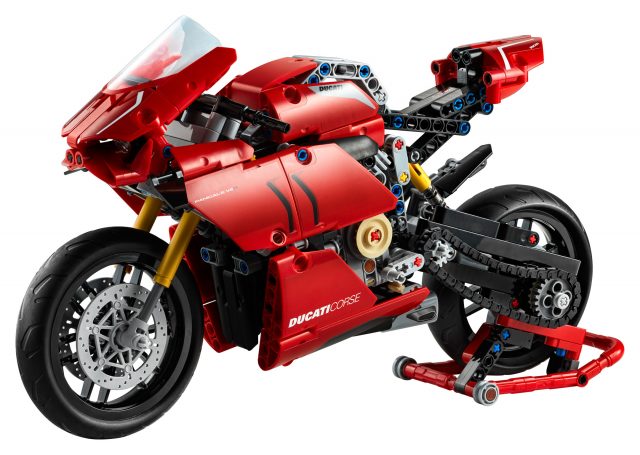 Inside the model, you can see the new 2-speed gearbox which activates the V4-cylinder engine, a first for any LEGO Technic motorcycle. The bike also features rear and front suspension 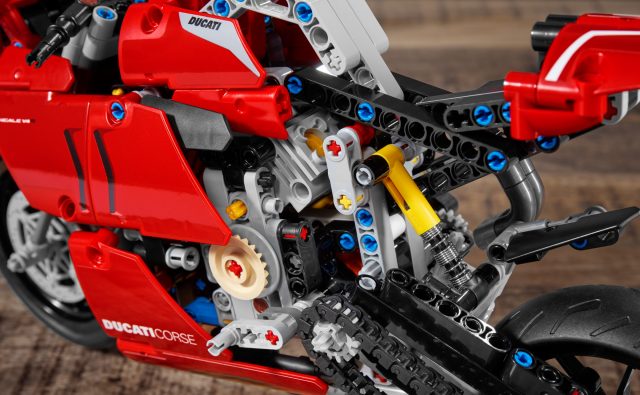 In comparison to the actual Ducati Panigale V4 R racing superbike pictured below, it is clear that LEGO Technic designers hit the nail on the head. The model is the first set to be created after a licensing agreement was recently signed between the LEGO Group and Ducati Motor Holding. 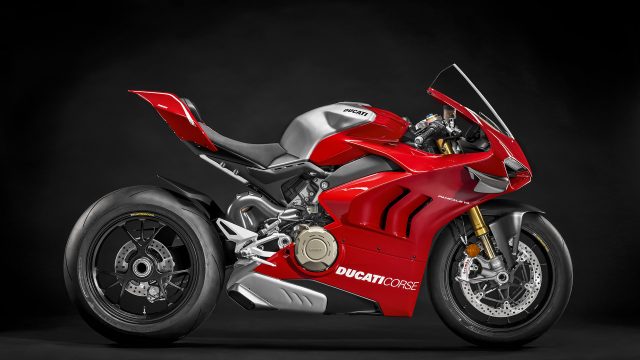 42107 LEGO Technic Ducati Panigale V4 R comes with 646 pieces and will sell for US $69,99  beginning June 1st. The entire press release and an expanded photo gallery from LEGO are included below. 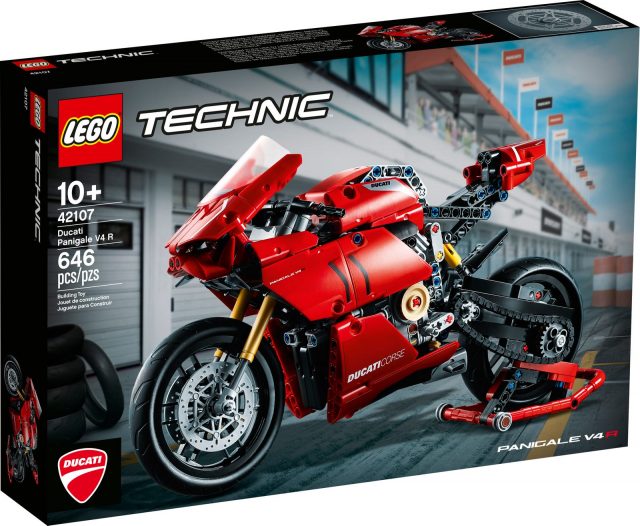 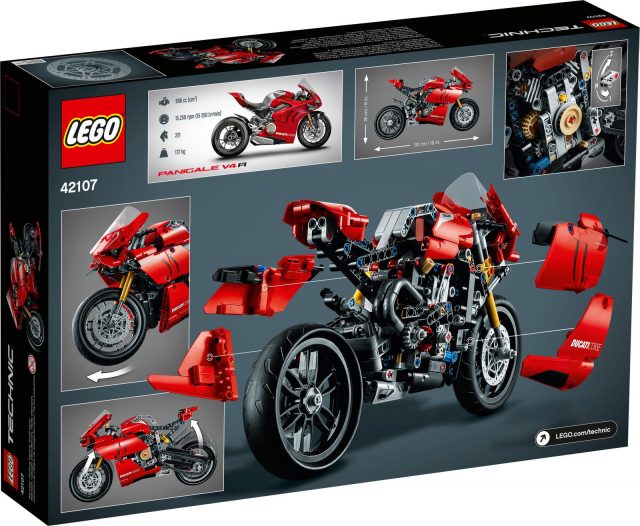 Note: it has come to our attention that the price and release date listed in LEGO’s press release differ from those listed on LEGO’s website, with the website listing a release on August 1 for $69.99 USD and the press release listing $59.99 USD on June 1. LEGO has confirmed for us that the June 1 release date is correct, while the price will be $69.99 USD as listed on the website.

The new model is a spectacular replica of the iconic Italian motorcycle, combining LEGO Technic and Ducati design DNA to recreate the curves and aerodynamic form of the two-wheeled wonder. Just like the visionary motorbike does in real life, the LEGO version transports LEGO builders to new heights as they easily act out the tight turns and fast straights that the bike can easily navigate thanks to its powerful engine.

Those that have ever imagined riding this iconic Italian-engineered motorcycle, will love building this LEGO Technic Ducati Panigale V4 R set. Builders can discover how the innovative 2-speed gearbox activates the V4-cylinder engine and marvel at the futuristic rear and front suspension before taking the model out for a spin of their own once complete. The model’s unique kickstand means that builders can park the superbike model up and proudly put it on display it once it has been put through its paces.

The LEGO Technic Ducati Panigale V4 R is the first motorcycle model in LEGO Technic history to include a gearbox that allows builders to navigate through different speeds. Other awesome features include realistic steering, suspension to help with high-octane action and front and rear disc brakes. An exhaust pipe, a windshield and a dashboard are also some of the small details that make this replica model so true to the full-size version. And of course, the classic red colour is sure to accelerate the pulse of any Ducati fan.

“The Ducati Panigale V4 R is such an elegant Italian icon and a true technological masterpiece.” commented Aurélien Rouffiange, Senior Designer at LEGO Technic. “It was essential that I included as many authentic details from the real motorbike as I could when designing the new LEGO Technic version, ensuring I captured all the bike’s curves and the unique features. Just as Ducati continually pushes boundaries in its design, we demonstrated what the LEGO Technic range is capable of by engineering a fully functioning motorcycle gearbox for the first time and connecting it to the spinning V4 cylinder engine using existing pieces.”

“We have all been kids passionate about LEGO bricks and I think it is easy to understand that this new licensing agreement between Ducati and the LEGO Group is like a dream come true. We are two brands that share the same values of dedication, passion and attention to detail – values that have come together to give life to a unique building experience” said Alessandro Cicognani, Ducati Licensing Director. “Our hope is that the Ducati Panigale V4 R LEGO Technic can bring together, excite and entertain not only children and parents, but also all the fans who ride their motorcycles every day.”

With the realistic features of the LEGO Technic Ducati Panigale V4 R, builders of all ages can immerse themselves in the world of engineering, as they discover how gear mechanisms work and the engine functions.

This new model is the first to be created after a licensing agreement was recently signed between the LEGO Group and Ducati Motor Holding. 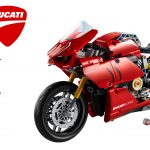 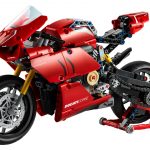 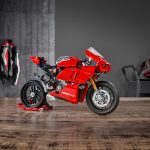 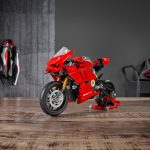 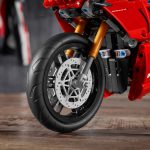 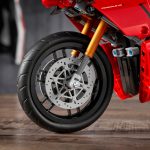 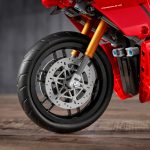 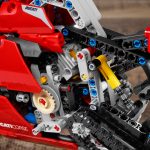 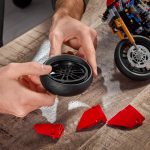 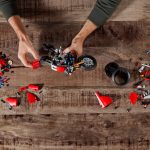 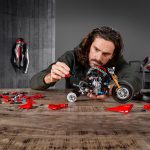 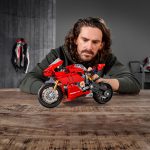 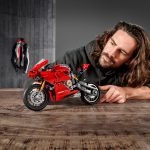